The grandest epoch in the history of Chicago was that which occurred on yesterday, in the laying of the last connecting link in the great iron band, the Pacific railroad, which cements the social and commercial interests of the eastward and westward extremes of the American Continent. This event, stupendous in its results, as affecting the entire country, if not the entire world, is to draw Chicago the dawn of a new era in the future greatness and prosperity of the city, and it followed that Chicago should rejoice. She did rejoice, and that in a manner and style peculiarly her own. Business is business all over the world. It is especially so in Chicago. Here societies and organizations, civic and military, religious and reformatory, benevolent and political, generally do the celebrating and parading, while the business men, the money makers, the bone and sinew of the metropolitan anatomy, mind their stores and warehouses; for the wheels of trade must not be stopped by ordinary impediments. Indeed, it is but once in a lifetime that business has a jubilee of its own. Even then the provocation must be great, the occasion an immense one. Yesterday the provocation and the occasion came together, and such a time as business did have over it must remain a marvel and a theme for wonderment during decades to come. Chicago never witnessed such a demonstration. There have been grand processions of all sorts of organizations, cannon fired, bells run, fire-works ignited, bonfires lighted, buildings illuminated, and other general exhibitions of rejoicing; but never before was the business element of the city fully aroused. Nothing short of the completion of the greatest business achievement in the history of the world could bring it about. Chicago, for the first time, yesterday, essayed to get up a purely business demonstration. Business men were at the bottom of it all, and business implements and paraphernalia were withdrawn from their ordinary uses to make up and swell the demonstration. Especially wonderful and grand must the affair of yesterday appear when it is remembered that the proceedings were wholly impromptu. A few weeks ago prominent citizens advised together, committees of the Common Council, Board of Trade and the citizens at large, were selected, and meetings were held for the purpose of Consumating a fitting celebration of the completion of the Pacific Railroad. Unlooked for occurrence conspired to prevent the carrying out of the magnificent programme which had been devised, and everything was of necessity. A few days ago the telegraph from California flashed the intelligence that, on a certain day, the last rail would be laid and the last spike driven with imposing ceremonies. Several of the leading business men of the city conferred together, and resolved that such an event must not be allowed to go unnoticed. To resolve is to do, in Chicago, and, with the holding of but two meetings, and but two working days in which to make arrangements, the immense demonstration of yesterday was brought about. 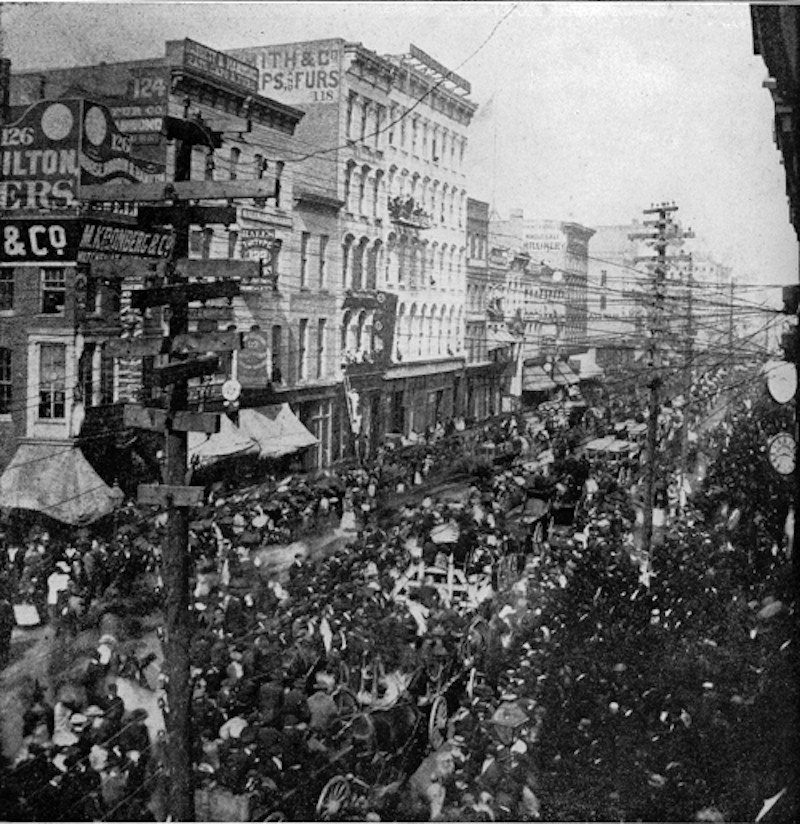 The procession is proceeding east on Lake Street from the corner of Clark Street. Potter Palmer’s Dry Goods store is the tall white building.

The sun never shown upon a finer day than that which nature vouchsafed for the Pacific Railroad celebration on yesterday. Early in the forenoon unusual signs of activity were manifested in the vehicular world, while at the mercantile and manufacturing establishments curious collections of all sorts of wares and implements were being arranged on wagons. Flags and banners floated from the roofs of the depots, hotels and principal buildings of the city; crowds of people thronged the streets, and evidences of a design on the part of the public in general to make a day of it were to be seen on every hand. During the forenoon General Singer, Superintendent of the Western Union Telegraph lines, in conjunction with E. P. Chandler, Superintendent of the Chicago Fire Alarm Telegraph Department, conducted a circuit from the Western Union office to the Court House tower, forming an electrical connection by which every alarm bell in Chicago, as also every engine house gong, should be struck simultaneously. At Promontory Point, the place where the Governor of California and suite were to drive the golden spike into the polished laurel-wood tie on which the last rail rested, the telegraph apparatus had been so arranged that the sounding key was placed under the spike, and when the hammer struck the head of the golden ingot the stroke was carried with the speed of electricity, direct to the Court House tower in Chicago, there acting instantaneously upon the wires communicating with the different alarm bells and engine house gongs, sounding thirty-four of these at precisely the same instant. A similar arrangement was made in all the principal cities of the Union, wherein the fire alarm telegraphs is in operation, thus announcing to millions of people that the grand work had received the finishing touch. At four minutes past 2 o’clock in the afternoon, Chicago time, the hammer touched the head of the two-hundred-dollar spike, and the bells of Chicago rang out the news. A scene of intense interest ensued. Hats were lifted, loud hurrahs rang through the air, bells pealed, steam whistles sounded, cannon boomed, and for a few moments the din was deafening. At the Tremont House, where the illustrious visitors from abroad sat in carriages, together with the Mayor and prominent citizens, Governor Bross proposed three cheers for the Pacific Railroad, which were given with enthusiastic earnestness, Vice President Colfax, as well as the rest, rising to his feet and joining in the grand huzza.

Meanwhile the various divisions of the procession were assembling at their respective places of rendezvous appointed by Chief Marshal Gurdon S. Hubbard. The first division, made up of the police, the military, Turnverein organizations, visitors, prominent citizens and city officials in carriages, and the Fire Department, formed on Market and Franklin streets, the right resting on Lake-street; the second division, including representatives from civic societies, United States officers, members of the Board of Trade, Western Telegraph Company, railroad representative, etc., on Wells street, right resting on Lake street; the third division, including the Chicago letter carriers, mail wagons containing Post Office officials, American Merchants’ Union and United States Express wagons, and Parmelee’s omnibuses and wagons on LaSalle street, the right resting on Lake street; the fourth division, including transportation wagons, teams of manufacturers and wholesale houses, carriages, milk wagons, express wagons, and vehicles of any and all descriptions, on Clark street, the right resting on Lake street. Considerable delay and confusion attended the assembling of the various constituent elements, this sate of things being materially heightened by the terrible clouds of dust which whirled through the streets. It is to be regretted that the proper city officials had not the forethought to cause the streets to be thoroughly sprinkled in advance, but it is at the same time a decided consolation that those same recreant officials were compelled to sit for over half an hour in carriages before the procession moved, whereby they were treated with severe doses of the all-pervading dust.

THE LINE OF MARCH.

The time for uncoiling the huge anaconda was set for 2 o’clock, and for so so huge and complicated an affair started with commendable precision. When the word of command was given, Lake street, the starting point, was fairly choked with the multitude, and it was with the utmost difficulty that the company of stalwart policemen, forming the lead, was enabled to break a sufficient passage-way to admit the procession. To Vaas’ choicest music, played in the best manner—Vaas always holds the post of honor, as he should—the procession passed east on Lake, meeting with many fine sights and sounds on the way, and turned its proud head into Wabash avenue. This noble thoroughfare, so far as the eye could reach, presented a compact, living mass of humanity, and while the residences, at doors, balconies and windows, were also crowded, were further set off by flags, banners, streamers and decorations of every description. On reaching Twelfth street, a detour was made to the east, and the procession then moved north on Michigan avenue.

During the time that the procession was moving southward on Wabash avenue to its turning point, the people who clustered on the sidewalks of door-steps of Michigan avenue, or who had seated themselves on the fence on the east side of the street, or had wandered down nigher to the lakeshore, amused themselves by gazing eagerly to the south. Looking at that direction, one saw boldly outlined against the sky long bands of black smoke, driven northward by the wind, and, also, hovering night he land, a long train of tugs and propellers, whence this smoke came. The moment that the procession reached Twelfth street, and turned on to Michigan avenue, the thunder of the cannon, and the music of the bells were almost drowned by the simultaneous whistling from these boats, and the noise vibrating across the water seemed to come wit additional shrillness to the ears of the listeners. As the procession turned northward these tugs came with it, and keeping as near the shore as possible, and moving onward in a long line, won almost as much attention as the rival display on the land. Decorated with United States and their own private flags they moved slowly forward, whistling as they went, until they reached a point off Washington street, were they disbanded and went their way. The vessels at the mouth of the harbor were not decorated, nor was there any special display on those in the river, except so far as the hoisting of a few flags went. The following list comprised the fleet of tugs:

On reaching the foot of Michigan avenue, the head of the procession was turned west to Clark, and along Clark the stream poured over the bridge into the North Division. The original intent was to proceed to Chicago avenue, but time pressing, the route cut short at Michigan street, when a westward march was taken to Wells street, and this thoroughfare north again to Lake. Not to slight the West Division, Lake street was then traversed to Halsted, and on Halsted the procession moved south to Van Buren. As all the others, so so these thoroughfare, were crowded to overflowing. In appreciation of the importance of the occasion, and in view of the desire of the little folks to see the world more, the schools of the city were dismissed at an earlier hour, and at the corner of Halsted and Van Buren streets, and reaching far down each of those thoroughfares, were gathered five or six thousand of the little folks, and a more delighted throng could scarcely be imagined. On Van Buren street the route was then taken east to Clark, and along Clark to the Court House, where the procession passed in review. When the head of the huge monster reached the City Hall, after passing along all the streets mentioned, the tai was yet floundering along Wabash avenue, having just been put on its way. It will be many a day before Chicago shall witness such another spontaneous outpouring of people—probably not until the completion of the railway to the moon.

THE PROCESSION IN A NUTSHELL.

In a summary of the constituent elements of the procession, which was over seven miles long and one hour and fifty-five minutes in passing a given point, given below, it will be seen that the actual number of vehicles of all classes in the line was SIX. Average two horses to each wagon, it is found that 1,626 horses were required; and computing that, at the least, four persons rode upon or clung to each vehicle, we find that 3,252 human beings rode in the line. The following recapitulation is the result of a careful, accurate count in every instance: 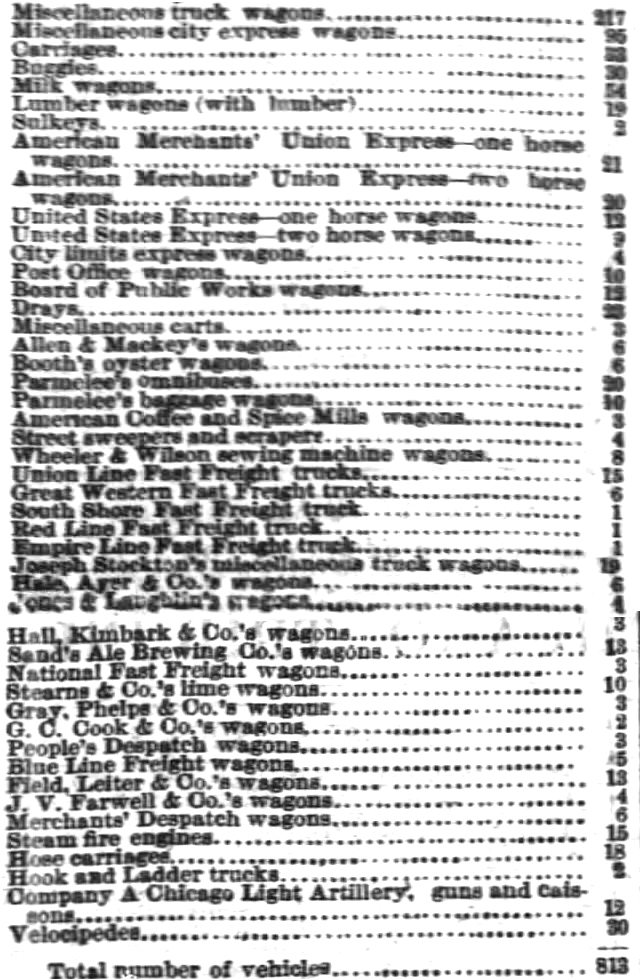 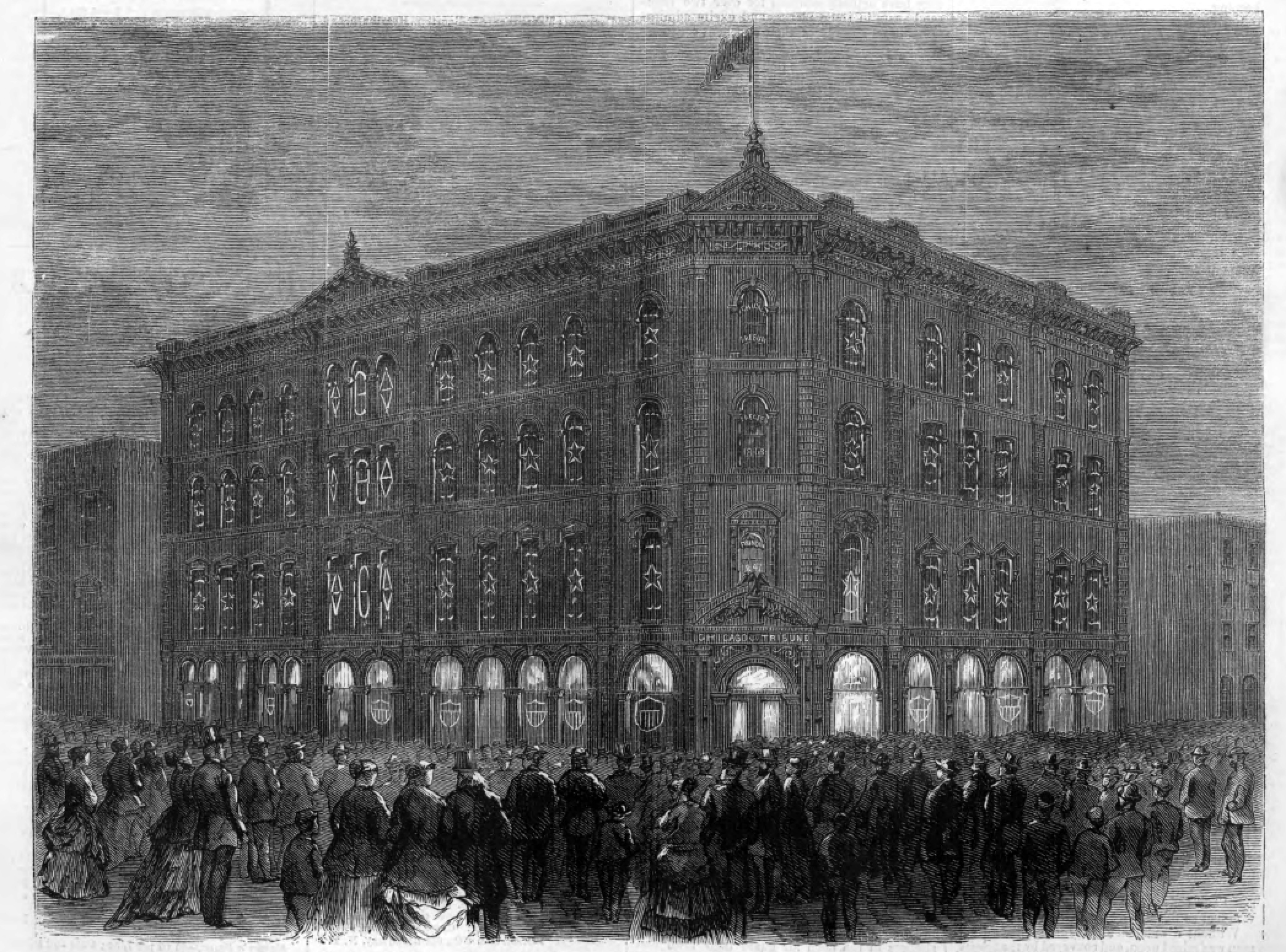 Map of the Union Pacific Railroad
1867