A mother’s unshakable conviction that her son is not a murderer and her willingness to toil on her hands and knees to prove this to the world have resulted in a sweeping investigation by The TIMES into the case of Joe Majczek, now in his 11th year of a 99-year sentence.

Reopening of this case has unearthed facts that were unknown to the jury which convicted Majczek and a co-defendant. TIMESmen are making public this new evidence for the first time in a series of articles, which the following is the fifth.

Two brief lines of a police report tell the story of how and why the hand of the law fell on Joe Majczek in the Lundy murder probe.

Acting on information we picked up Joe Majczek at his home for questioning.

And there is this immediately following:

There was no trace of Ted Marcinkiewicz.

To the police, at that time, the last notation was more important than the first. Ted was definitely a suspect in the slaying of Policeman William Lundy. But Majczek was just another fellow named Joe when the police dropped in on the hope he could direct them toward the man they had listed as “wanted.”

TIME TABLE OF EVENTS
Picking up a bit of information here and there, and double-checking everything they were told, TIMESmen have been able to fill in blank spaces of the police department’s cryptic reports and thereby work out a time table of the Lundy murder case events.

First to find a place in this table is Ted. And right along with him is the woman whose shadow falls athwart every trail of the mystery. As was true of her “identification” of Joe Majczek, Vera Walush is shown as the possessor of an amazing recuperative memory in the way she finally got around to putting the “finger” on Ted Marcinkiewicz.

In her trial testimony Vera said she had met and talked with Ted on three different “social occasions” before he allegedly appeared in her delicatessen as a murder-dealing bandit. But there was no mention of Ted in her first statement to police. She did say one of the killers wore a “mask.” She said she did not suspect any particular person, but when asked if anyone might have knowledge of a proposed hold-up of her place, she mentioned a Mrs. Bessie Barron, then living at 1825 W. 45th.

TELLS TED’S ROBBERY TALK
Questioned, Mrs. Barron said that about a month before Ted had told her he “would like to rob” Mrs. Walush. That, all available records indicate, was the first time Ted’s name entered the case.

At the final inquest a month after the murder, Vera, who had been so strangely silent about Ted in the hours immediately following the crime, identified and recognized Ted at the scene right off the bat! And how did she manage to do this? Oh! went her answer, Ted “was wearing dark glasses and they fell off.” Nothing more was heard of the “mask” she had mentioned originally.

Interviewed at Menard penitentiary, where he, like Joe, is serving a 99-year sentence, Ted told a TIMES investigator he was approaching his home, then at 4516 S. Honore, on the night of the murder, when a friend informed him that police, checking on Mrs. Barron’s story, were awaiting him.

Fearing, as he put it, “the third degree,” he roamed about for a while then decided to seek shelter at the home of his childhood friend, Joe Majczek, 3021 Farrel. HIs friend was out, but Joe’s wife, Helen, invited him in. 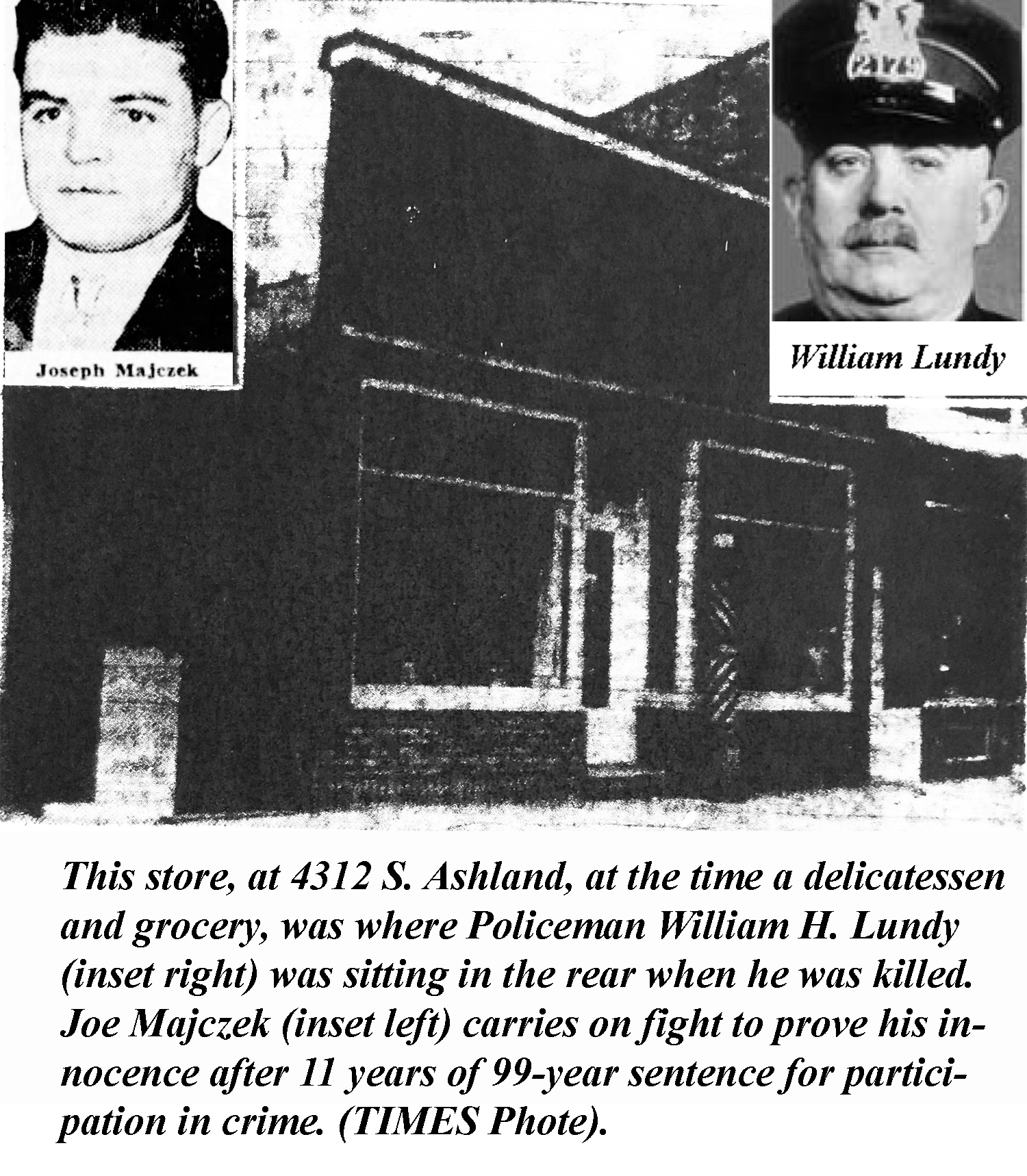 ORDERED OUT BY JOE
Homeward bound at about 11 PM after visiting friends, Joe bought a newspaper and read that his old schoolmate was wanted for questioning in a policeman’s murder. At the first sight of Ted in his home Joe, according to his story, said:

I’m on probation, Teddy. If they find you here, they’re sure to connect me with the case. I hate to do this, but you can’t stay here.

But Ted pleaded that he was innocent; that he was afraid “the cops would force me to sign a confession.”

It was terribly cold out and I felt sorry for Ted. I believed he had nothing to do withy the killing. I persuaded Joe to let him stay.

Ted concealed himself in the house for three days. But Joe says, and his wife agrees, that he himself went out every day looking for work. Eventually Ted reached a lawyer friend who, it is stated, promised to investigate Ted’s status in the murder inquiry. Ted went elsewhere to hide.

JOE EASY TO FIND
As he was required vto do monthly, on Dec. 19, reported to a probation officer at the Criminal Court building. The previous January he had joined with a gang in burglarizing a grocery for $14 loot, of which Joe got $2. Because he had no previous record he was placed on probation. It is apparent that if police suspected him in the Lundy murder they would have had no difficulty in finding him through probation office records.

Early in the morning of Dec. 22 a bootlegger of those prohibition days, identified only as “Alex,” smashed up his auto in the New City district. As they were doing with all men picked up, police questioned him about the Lundy case. Alex admitted that hours after the slaying he had encountered sorely-wanted Ted and had driven him to Joe Majczek’s home.

At 5:45 AM a squad descended on Joe’s home. The report, signed by the late Capt. Michael P. Naughton, then sergeant, states:

The natural police reaction was that he was stalling for time.

BLAME TAKEN BY JOE’S WIFE
Both Joe and his wife went off to the station. Helen frankly blames herself for an unwise statement that couldn’t have helped but excite suspicion.

They were questioned separately. Joe admitted Ted had stayed with him. But Helen, panic-stricken and remorseful because she recognized she was responsible for Ted’s stay, thought to keep her husband from being involved with the suspect by denying Ted had been given shelter.

Despite this blunder the police, according to the wife, indicated they had nothing against Joe.

She quoted an unidentified detective as telling her:

You go home and don’t you run to any lawyer, because when your husband helps us to find Teddy, we’ll send him home to you.

Joe never did get home. Christmas eve they booked him for murder. They said Mrs. Walush identified him.

If one is to take Ted’s words at face value he, like Helen, bitterly regrets his part in dragging Joe into the murder net.

No matter what happens to me I’ll regret to my dying day that I stopped at Joe’s home and in so doing contributed to his unjust conviction.

It all started, he said, when he was approached by a woman acquaintance who was angry because she believed her husband was infatuated with Vera Malush, then a divorcee.

In some weird fashion, the prisoner contends, Bessie got the idea he planned the holdup. Bessie told Mrs. Walush to beware of Ted. But Vera with her uncertain memory, to put it as kindly as possible, momentarily forgot about Ted only to have Bessie’s statement to the police jolt her back into thinking about a “mask,” later replaced in her memory book by “dark glasses.”

Tomorrow: Did Joe go out to rob and kill the day his wife broke the news she was expecting a child? Two versions of Joe’s whereabouts of the time the murder was done.