Theodore Marcinkewicz, 24 years old, 4516 South Hermitage avenue, was sought yesterday by police for questioning concerning the murder of Policeman William Lundy, who was shot to death Friday during an attempted robbery of a delicatessen store at 4312 South Ashland avenue. 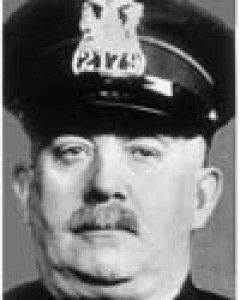 Ten youths who answer description of the bandits, were arrested yesterday in the neighborhood and are being held for possible identification by Mrs. Vera Walush, owner of the delicatessen. Policeman Lundy, who was 57 years old and lived at 8432 South Carpenter avenue, was drinking coffee in the delicatessen when the two bandits entered. He grappled with the robbers and was killed in the ensuing gun battle. A pair of colored glasses lost by one of the bandits and six empty shells from the revolvers of the gunmen were added to the descriptions furnished by the store owner as possible clews to the identity of the murderer. 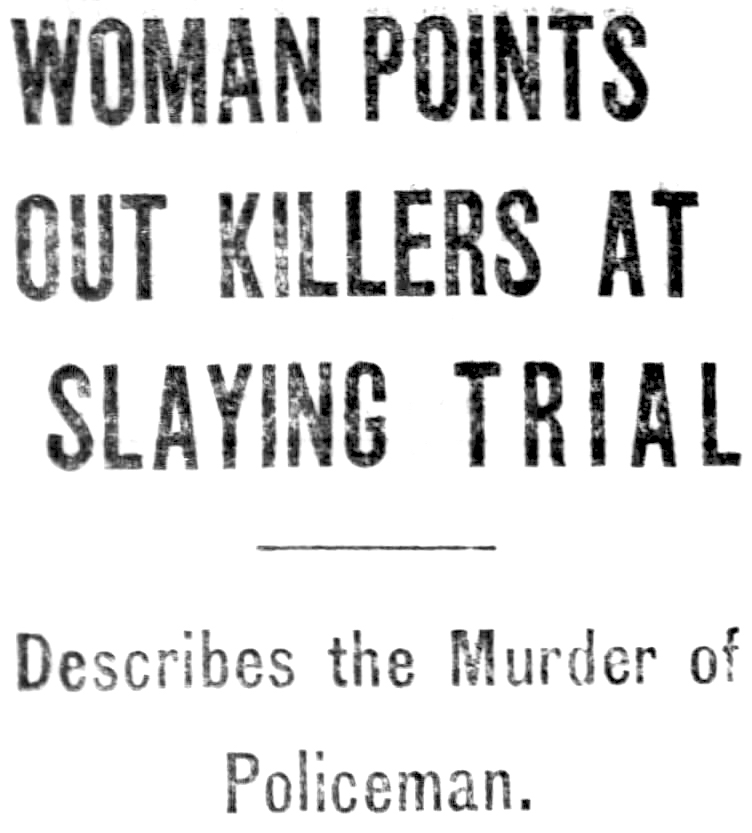 Two alleged police killers were identified yesterday before Judge Charles P. Molthrop in the Criminal court by a woman owner of a delicatessen shop who described the slaying of Policeman William D. Lundy.

Mrs. Vera Walush, owner of the shop at 4312 South Ashland avenue, testified that Policeman Lundy came into the store Dec. 9, 1932. It was a cold day and he stood near the stove to warm his hands, she said. Then he went into the rear room and was playing with Mrs. Walush’s baby when two bandits entered the shop.

Mrs. Walush pointed out the defendants, Joseph Majczek, 24 years old, and Theodore Marcinkiewicz, 26 years old, as the two bandits. They shouted, “This is a stickup,” three times before she understood them, Mrs. Walush said.

Rush Into Kitchen.
“Then they pushed their way into the kitchen,” the witness continued. “When they went through the door, Majczek saw the policeman and hollered, ‘Hey, cop,’ and went over to him. They told the policeman to “stick ’em up,” but the policeman grabbed Majczek with one hand and with the other reached for his gun.

“Both bandits then drew their guns and fired. The policeman fell to the floor and the robbers ran out.”

The state’s next witness, Mrs. Bessie Barron, 1825 West 45the street, testified that Marcinkiewicz had come to her store a month before the slaying and told her he knew Mrs. Walush had $1,500 in her place. “I’m going to make that joint within a month,” she quoted him as telling her.

John Zagata, 4316 South Marshfield avenue, a witness for the state, who failed to appear at the opening of the trial Tuesday, yesterday came in with the explanation that he had not known when his services would be needed. Zatata, a coal truck driver, testified that he had been talking to Policeman Lundy just before the murder.

“It was getting pretty dark outside,” he testified, “so I can’t be sure that these are the two men who did the shooting.” 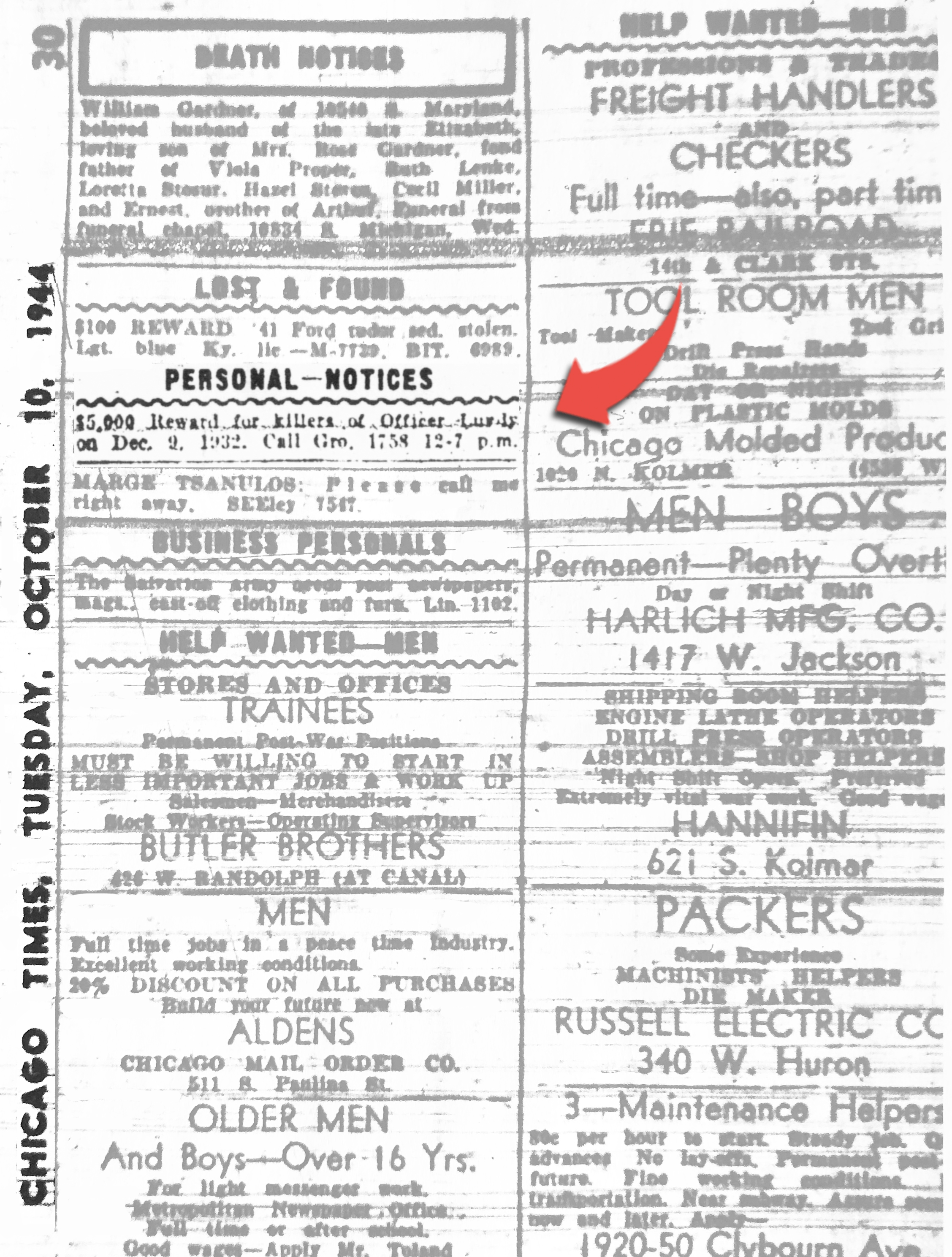 Today, the TIMES1 takes its readers behind the scenes of a dramatic hunt for the truth in a murder case the law called solved a decade ago.

It is the story of a murder and what happened thereafter. But it is something more than a true life detective drama. It is not in itself a search for thew guilty. Rather it is an honest effort to provide a conclusive answer to the question:

Has the state of Illinois transgressed the Biblical warning that 99 guilty go free than one innocent suffer?

The convicted man is Joseph Majczek, serving a 99-year sentence on a charge of killing a policeman.

Impressed with the devotion of his mother who has worked as a scrubwoman to raise funds for his vindication, the TIMES re-opened the case.

Startling new facts, including incontrovertible evidence that the presiding judge conducted what was tantamount to a “second trial” in his chambers after passing sentence, have been uncovered by TIMESmen during the last six weeks.

In this series, TIMES readers will be taken step-by-step and day-to-day on a patient, unswerving hunt for the truth.

And when the report is concluded, TIMES readers will have all the facts enabling them to be, in their own mind, judge and jury of the merits of the case docketed as:

People of the State of Illinois vs. Joseph Majczek.

The story opens today with the murder which Joe—innocent or no—is paying the penalty.

By JACK McPHAUL and JAMES McGUIRE
Everybody in Chicago was talking about the weather this 9th day of December, 1932. Even a man as big and rugged as William D. Lundy felt its bite.

Lundy, his 6 feet, 2 inches, 230 pounds bulking large in his policeman’s uniform, slapped his hands together vigorously, as he entered the shop run by Mrs. Vera Walush at 4312 S. Ashland. Married, and the father of three, the 58-year-old Lundy was assigned to New City station and had just finished a tour of traffic duty.

It was, he remarked to Mrs. Walush, a mean day to fight the wind. At this 2:45 PM hour, the thermometer registered 11 degrees below zero.

Mrs. Walush’s place was licensed as a delicatessen and the front shop displayed meals and groceries. Lundy went through a door at the rear and into the kitchen. He warmed himself over an old-fashioned stove.

ROOM DIMLY LIGHTED.
The kitchen was dimly lighted. The cold had frosted the windows, enhancing the dark and gloomy aspect of the room.

Into the kitchen came John Zagata, 4318 S. Marshfield avenue, who then had placed a ton of coal in the Walush shed.

Prohibition laws were still on the books, but Zagata knew that the plump blonde Vera conducted the era’s typical backroom sideline. He bought a drink for himself and the bluecoat. Vera went to a radio and fiddled with the dials.

Suddenly Zagata saw two men in the doorway leading from the store. In the poor light he could not distinguish their features. But he saw the shine of metal and realized both were carrying revolvers.

HIDES IN CLOSET.
It is a matter of controversy just when Mrs. Walush first saw the intruders, but it is agreed that at some time during the episode she fled to shelter in a closet. This factor forms an important part of the investigation and will be discussed more fully.

In any event Lundy, whose back was to the door, was the last of the trio to be aware that something was amiss. Struck by Zagata’s sudden silence, the patrolman turned in his chair.

“This is a stickup,” one of the gunmen announced.

The courageous Lundy, veteran of 27 years on the force, drew his gun and leaped at the pair. Both bandits fired. Lundy fell dead, seven bullets in his body. The killers fled in a waiting auto.

Lundy was the eighth policeman to be slain during 1932. His colleagues swung into action. A half dozen suspects were brought in, questioned, turned loose.

REVEAL TED IS SUSPECT.
Late that night the investigators revealed that one Ted Marcinkiewicz, then living at 4516 S. Honore, was wanted as one of the killers. They didn’t say what information they were acting on. The course of events that brought Ted’s name into the crime has been traced by TIMESmen and will be explained as this report develops.

Days passed and there was no clue to Ted’s whereabouts. The investigation appeared to be at a standstill.

On Dec. 22—two weeks after the murder—police announced that Joseph Majczek, 4318 S. Marshfield, was in custody and had been identified by Mrs. Walush as one of the slayers.

Newspapers carried the police announcement that the case was “solved.” At the time there seemed no particular reason for reporters to scrutinize the series of events that swept Majczek into the police net nor to probe the circumstances surrounding the show-up2 at which Vera supplied the necessary “finger.”

A careful re-check of these incidents had to wait 12 years until the TIMESmen, acting on the plea of faithful mother, delved into musty history.

SURRENDERED IN 1933.
Marcinkiewicz surrendered in the fall of 1933 and in November he and Joe went on trial before a jury in the Criminal Court of Judge Charles P. Molthrop.

It was the last of six trials for accused killers of policemen. The five previous trials had resulted in convictions. The period was one in which civic groups and newspapers were agitated over a “crime wave,” and some of the papers were publishing a daily score on accomplishments of the state’s attorney’s office.

Only witness to identify the pair was Vera Walush. The jury deliberated two hours and 40 minutes, voted guilty and fixed sentence at 99 years.

And that seemed to be that. The Criminal courts continued grinding out justice. Nobody paid any attention to the fact that Joe Majczek, convicted prisoner, was brought four times into Judge Mothrop’s chambers. The boys in the press room were unaware of a parade of Lundy murder witnesses to the chambers.

TAKEN TO PRISON.
Presently, just as if nothing had occurred, Joe was removed to Stateville penitentiary.

Now, for the first time, the full story of these dramatic “second trial scenes im Judge Mothrop’s chambers has been brought to light, and will be related in its proper sequence in this series.

But back in 1933, with Joe stripped of hid name in Stateville and given the number 8356E, the future for him and his nearest and dearest was bleak.

Aware that Joe could not hope for parole until he had served 35 years, his wife, mother of his now 11-year old son, divorced him, and re-married. But she continued to do what she could. She read magazine articles on truth serum, lie detectors and other innovations in criminology. She wrote to the authors, pleading for assistance, but she was unable to stir up any action.

Joe’s mother, Mrs. Tillie Majczek, made her contribution to the fight on her hands and knees. Night after night, for more than a decade, she worked as a scrubwoman in a Loop skyscraper. She saved every penny, with the encouragement of her husband, Michael, she mortgaged the two-story family home at 2038 W. 52d.

On Oct. 10, she appeared at the TIMES business office and inserted an ad, offering $5,000 reward for the capture of Policeman Lundy’s slayers.

As a result of that ad, Tillie Majczek, 52-year old mother, no longer struggles alone in her fight for a public review of her son’s case.

Tomorrow: A never-say-die mother speaks out for an imprisoned son. The hunt into the past gets underway. What was the secret of the after-trial sessions in the judge’s chambers? Is Joe Majczek guilty?

1Chicago Daily Times, 1929 – 1948 (merged with Chicago Sun)
2A show-up is an identification procedure in which the police present a single suspect to an eyewitness and then ask the eyewitness whether the suspect is the perpetrator. Unfortunately, the convenience of a show-up comes at a high price: the increased risk of a false identification.