With today’s article, The TIMES completes the report on the investigation made by TIMESmen into the circumstances attending the arrest and conviction of Joe Majczek on a charge of murdering a policeman. This hunt back into the past for the truth in the case was inspired by the self-sacrifices of Mrs. Tillie Majczek, who has worked for more than a decade as a scrubwoman to win vindication for the son she refused to believe is a murderer.

By JACK McPHAUL and JAMES McGUIRE
TIMESmen have been able to trace one-third of the jury which convicted Joe Majczek and a co-defendant. With these four members of the panel of 12, reporters have talked over Joe’s case from two aspects:

1. The case as it was in the minds of the jurors which they retired to deliberate 11 years ago last month.
2. The case as re-constructed today with the new evidence TIMESmen have gathered; facts. The TIMES has been presenting to its readers daily in this series of reports.

And the results has been this:
The four jurors who voted Joe guilty more than a decade ago would today—if The TIMES evidence had been incorporated into the trial record—vote to acquit!

QUOTE POLICE RECORDS!
The investigators had no difficulty in meeting the jurors’ natural “if what you say is true” air. The TIMNESmen were able to show that the two items of new evidence which, the ex-talesman concede, would have swung the pendulum in Joe’s favor were based not on hearing or just someone’s word, but came from the police department’s own records!

Why these records were not obtained for presentation to the jury is one of several mysteries of Joe Majczek’s case.

As was to be expected, the four disclosed that the most vivid picture they took to the jury room was that of Vera Watush pointing a finger at Joe Majczek and Ted Marcinkiewicz and asserting firmly:

those two guys…they were right in my face.

JURORS WERE ‘MISLED’
But, the jurors say, they were led to believe that Vera Walush had identified Joe the very first time she saw him and Ted Marcinkiewicz, the second important factor—they were given to understand that Vera was the first to bring Ted’s name into the case.

If it had been established to our attention that with witnesses available Majczek had been in custody for 34 hours before he was identified, we would have wanted to know more about the circumstances of the identification.

As previously reported to TIMES readers, Joe was arrested at 5:45 AM Dec. 22, but it was not until 3:45 PM Dec 23 that Vera Walush made her purported identification. According to Joe—whose claim of innocence has been upheld by a lie detector test—Vera viewed him twice, said he was not one of the slayers, then after a mysterious one-hour intermission confronted him for the third time and only then supplied the necessary “finger.”

LAWYER IGNORES JOE.
Joe states he asked his attorney to question Vera about her inability to identify him first five times. The attorney did not do this. According to Joe, he asked the lawyer to summon Sgt. Michael P. Naughton and question him on exactly how the show-up was conducted. Naughton was not called.

Sgt. Daniel Healy testified Joe was found “behind a bed.” The convicted man tells The TIMES that when he heard of the police squad’s dawn arrival he got out of bed and started to dress saying to his wife:

Let them in. I have nothing to hide.

Joe claims he asked his lawyer to question Healy about the layout of the bedroom, his contention being that there was not enough space for him to hidden behind the bed.

The lawyer, according to Joe, declined, saying. “It’s too minor a matter to think about.”

Yet, the Supreme court, in its review, thought enough of the unchallenged statement to point out: “The police found him behind a bed.”

Hass said the fact that Joe did not testify in his own behalf hurt him in the eyes of the jury. Joe told The TIMES he wanted to take the stand but was instructed by his counsel not to.

Apparently the lawyer thought it was better to let the jury wonder what his client was afraid of, rather than give the state opportunity to cross-examine Joe and thus bring out his “record.”

The record consisted of one offense, then two years in the past. It was a burglary that netted Joe $2. Because it was his first offense he was placed on probation.

ATTORNEY DISBARRED.
The attorney who directed Joe’s defense was subsequently disbarred by the Illinois Supreme court of a charge of taking money from a client and then failing to furnish required services.

Todd said that if the jury had known Vera Walush was a bootlegger they would have scrutinized her testimony in a different light.

Joe Zagata, eyewitness to Policeman William D. Lundy’s murder, has told The TIMES that Vera sold him and Lundy liquor in her back room speakeasy shortly before the fatal gunplay. He did nit mention this at the trial, saying now he thought it was irrelevant.

Concerning Joe’s co-defendant, there was every reason, from the prosecution standpoint, for the jury to be ignorant of the fact that Vera’s “recognition” of Ted came rather late.

SHE SAID SHE KNEW TED.
On the stand, in support of her “identification,” she mentioned meeting Ted on three occasions before the holdup. Yet, in her first police statement (something the jurors never heard of) she said she had not recognized either of the slayers and suspected no one in particular. It was not until Bessie Barron, a friend of Vera’s, told police that a month before she had warned Mrs. Walush of a possible robbery by Ted that Vera got around to “remembering” she had “recognized” Ted.

If there were another gathering of the principals for a new hearing at this late date, Bessie Barron would have a significant story to tell.

She would repeat charges made in a sworn affidavit, published in last Sunday’s TIMES, that Vera Walush has admitted on numerous occasions that her identification of Joe and Ted was false and made only under police pressure.

VOTED FOR ACQUITTAL.
Foreman Kruse revealed that even with Vera’s “identification” he and two other jurors thought the case Joe so skimpy they voted for acquittal. But after tywo hours and 40 minutes of argument they were won over to a verdict of guilty.

If I had the facts presented by The TIMES and saw no reason to dispute them I’d still be in the jury room, if necessary.

The three other jurors agreed.

What is YOUR verdict?
Woud YOU convict Joe Majczek?

Or would YOU agree that Tillie Majczek is fighting a just cause when she seeks freedom and vindication for her son, who has already served 11 years—lacking executive clemency—must serve 22 years before he can apply for parole?

Watch The TIMES for latest developments in Joe Majczek’s case. 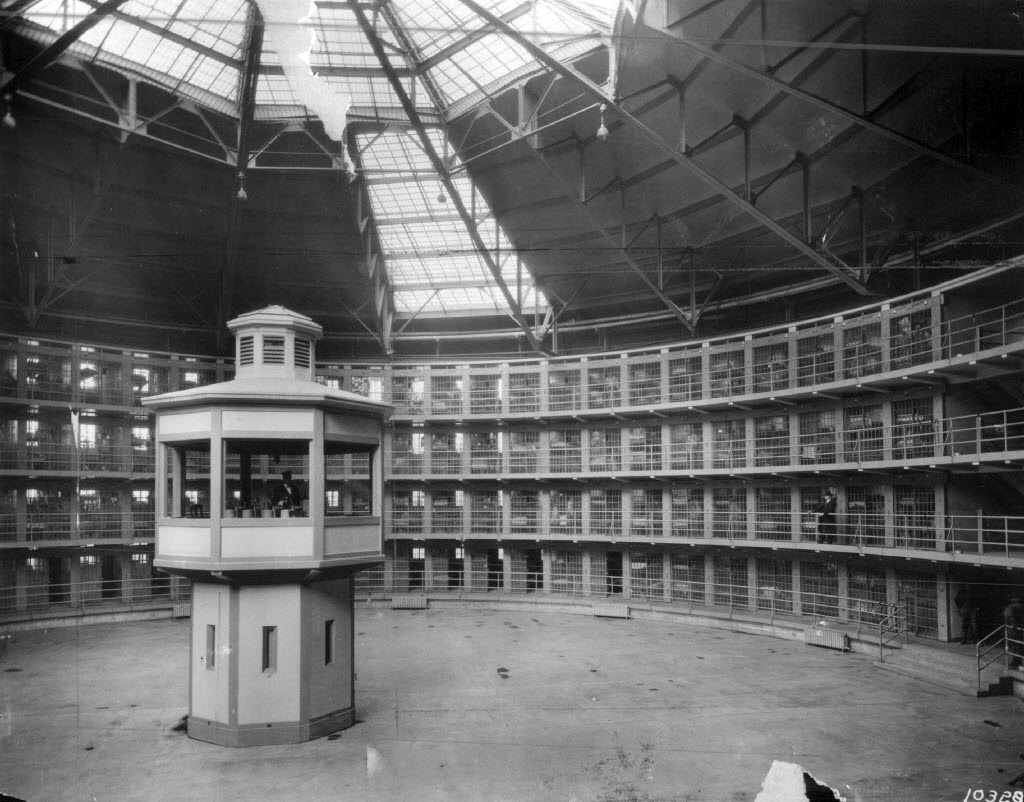 It was on October 11, 1944 when TIMES reporter Terry Colangelo chanced to turn to the classified section of The Chicago Times while awaiting a city desk assignment to start off her day. She was looking for the unusual among the “persona;” ads. She found it in an ad which read:
$5000 reward for the killers of Officer Lundy on Dec. 9, 1932. Call Gro. 1758 12-7 p.m.”

She had no way of knowing then that her reportorial curiosity which led her to the lucky discovery of the ad would bring, in less than a year, a full pardon to a man who already served 11 years of a 99-year term unjustly imposed for the slauying of a Chicago policeman.

She brought the ad to the attention of the city editor. Thus began the vindication of Joseph Majczek, 36, Convict No. 8356E at Stateville penitentiary in Joliet, Ill.

The release of Joe Majczek by a governor’s pardon became national news. Most newspapers retold the entire story, which is not necessary here. Wisconsin’s Marshfield News Herald summarized the story of Mr. Majczek’s pardon the best. 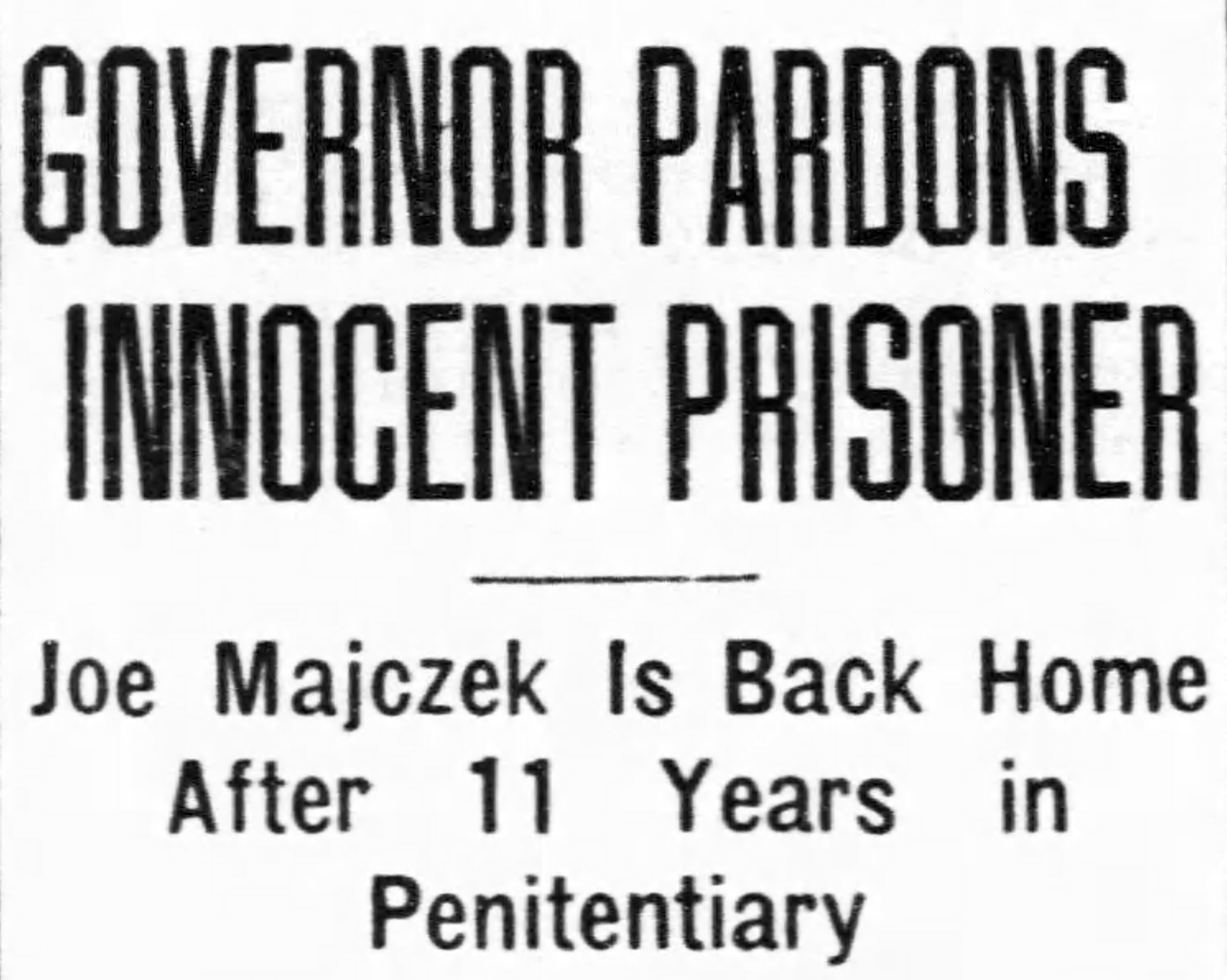 Chicago—(AP)—Joe Majczek was back home today with his mother who scrubbed floors for 11 years to win his freedom from unjust imprisonment and remove him from the misplaced stigma of murderer.

A Governor’s pardon opened the gates of Stateville penitentiary yesterday for the 37-year-old man who since 1933 had been serving a 99-year sentence. Gov. Dwight H. Green found him innocent of the murder of Policeman William Lundy for which Majczek was convicted.

His release was the answer to the toll and prayers of his 57-year-old mother, Mrs. Tillie Majczek, who became a a charwoman in a downtown skyscraper, mortgaged her home, and saved allotment checks of another son to raise $5,000 to prove Joe’s was a “bum rap.”

Majczek’s wrongly imposed punishment has not embittered him. He said:

I know that nobody escapes his share of troubles. What happened to me was my portion. I realize I’ll never be able to find happiness if I start out with a grudge against anybody.

“I want to get my hands on some work—and quick.

When Mrs. Majczek had raised her $5,000, she inserted an ad in the Chicago Daily Times offering $5,000 reward for “killers of Officer Lundy Dec. 9, 1932.” Times reporters investigated and aided her in her campaign.

Mrs. Majczek offered the $5,000 to the newspaper when her son was pardoned but the publishers declined, saying they considered the case of community interest and public service.

On the automobile ride home from prison near Joliet, Majczek remarked how everything had changed since 1933. Then he spied a Chicago street car and said:

They haven’t changed any. One of these days I’m going to take a long ride on a streetcar. 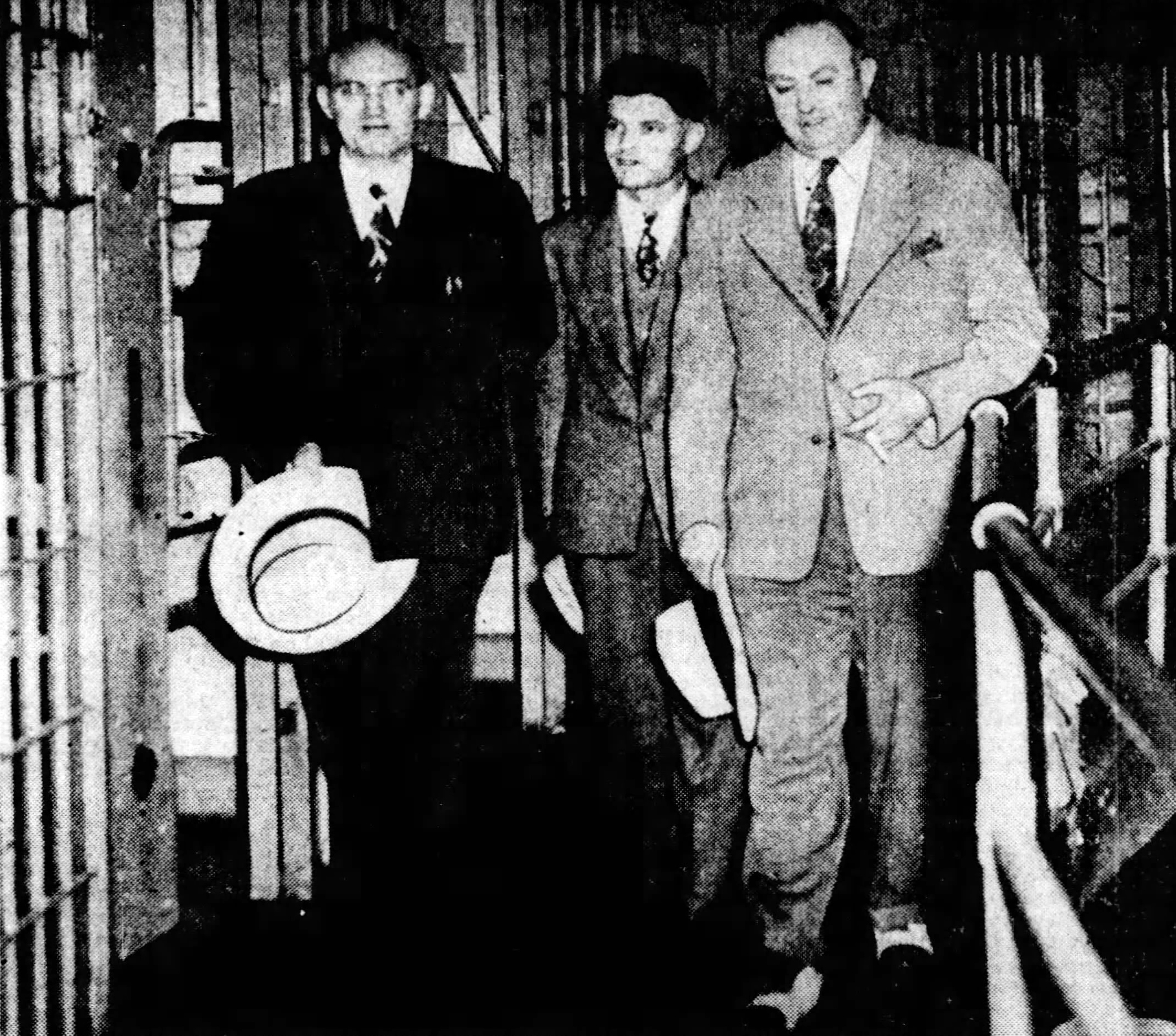 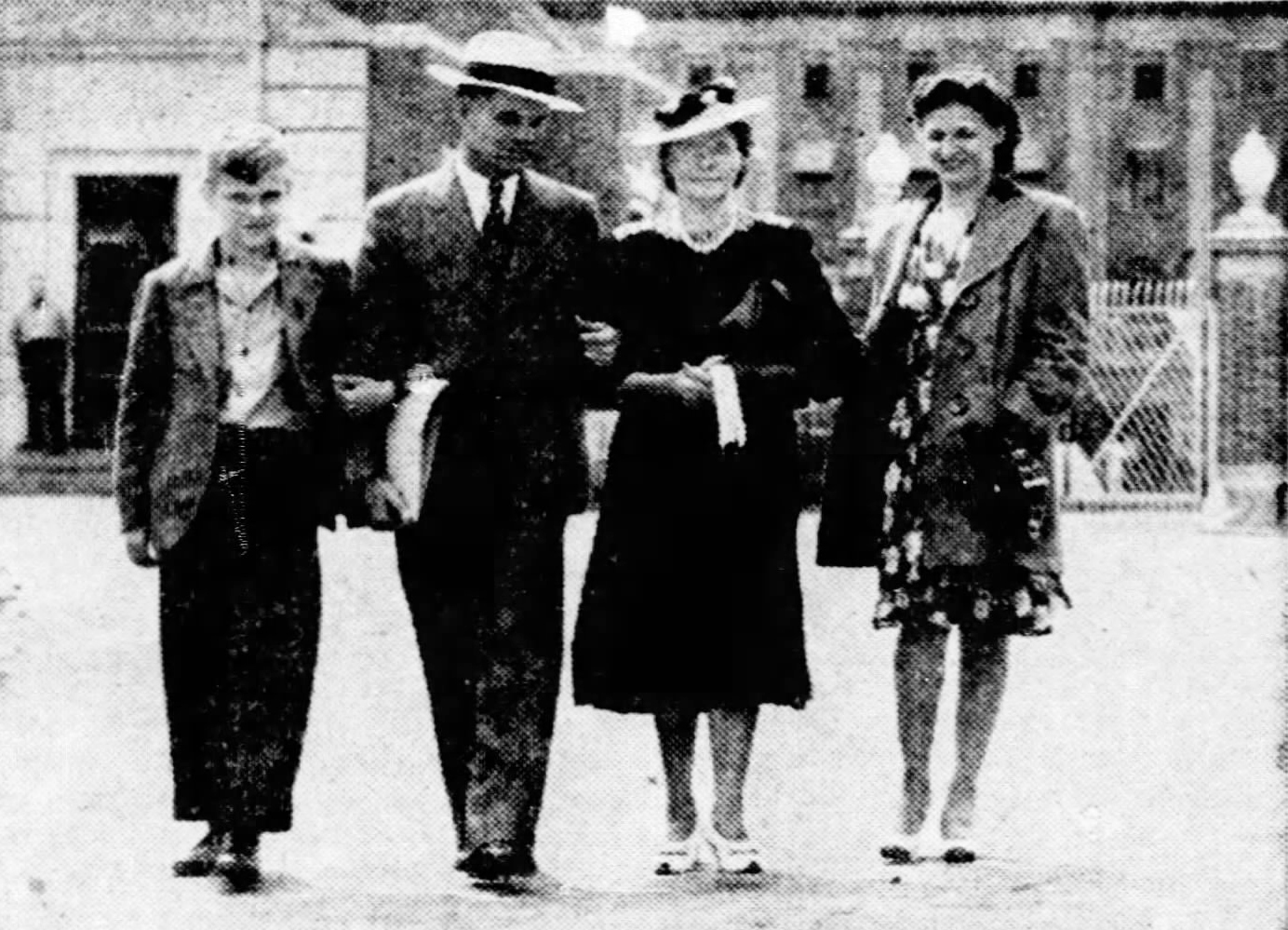 Joseph Maczek, his son, Joseph, Jr., his mother, Tillie, and his former wife, Helen, leaving the prison at Joliet, Ill. 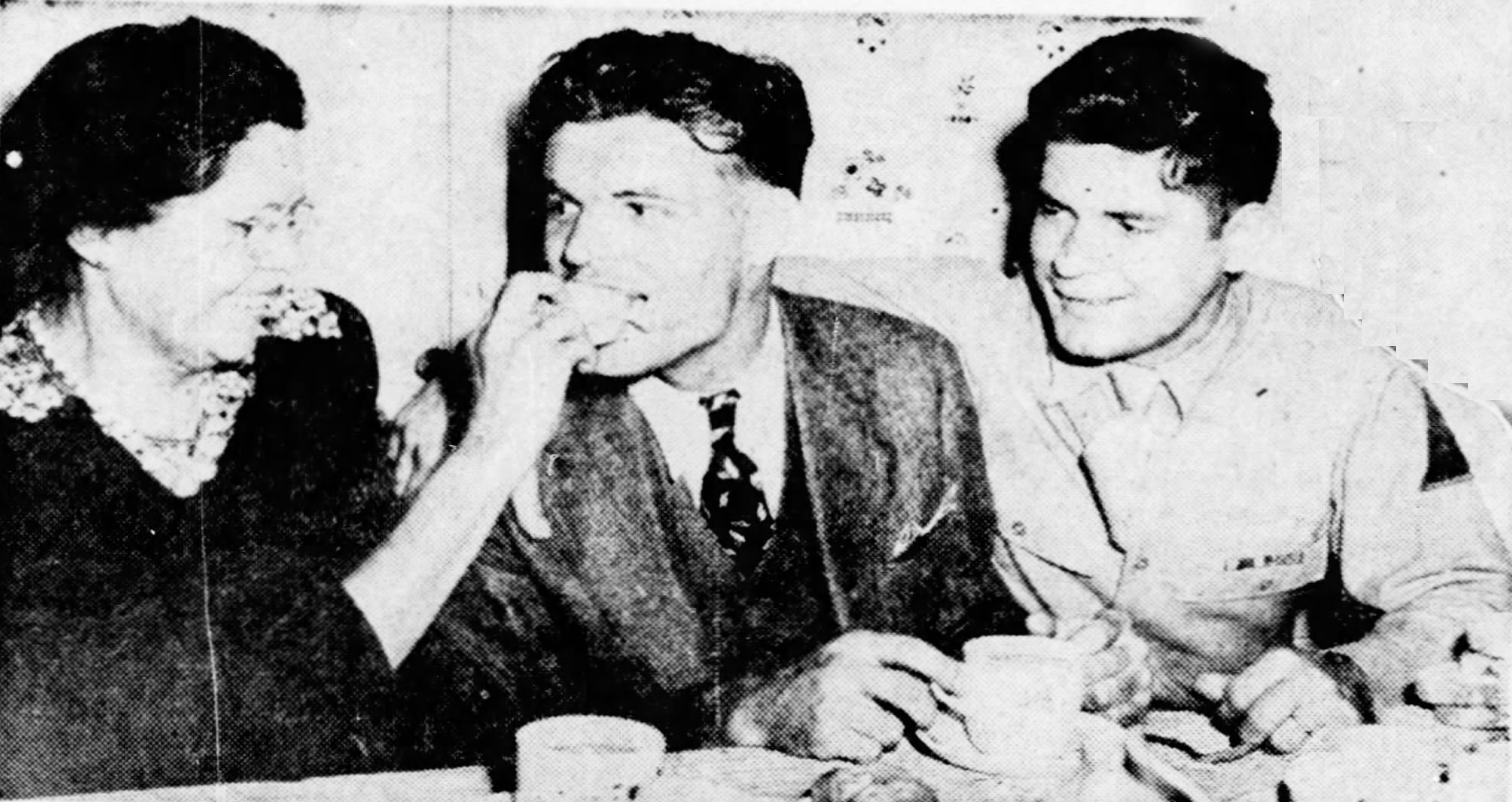 Mrs. Tillie Majczek feeds Joseph his first bite of home cooking in 12 years. With them is another son, Frank, an army private, home on furlough to help celebrate Joe’s release from prison. 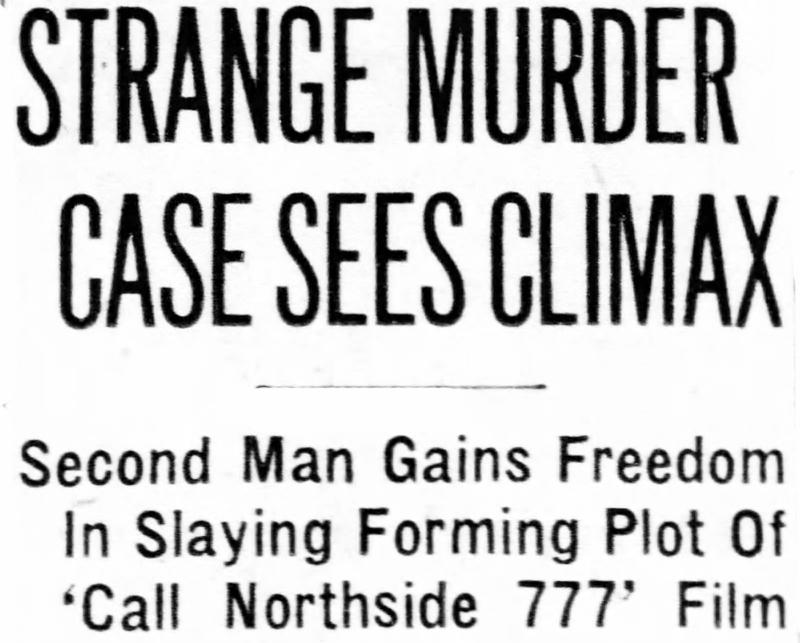 Theodore Marcinkiewicz, 41, who was sent to prison in 1933 under a 99 year sentence in the holdup murder of a policeman, was freed yesterday by Chief Justice Thomas J. Lynch in Criminal court after an extended hearing on a writ of habeas corpus.

Marcinkiewicz and Joseph Majczek were convicted by a jury of the murder of Policeman William Lundy in the attempted holdup of the delicatessen of Mrs. Vera Walush Kasulis, then located at 4312 S. Ashland av. Majczek, now an insurance salesman, was pardoned in 1945 when he was declared to be innocent.

Assistant Public Defender Erwin Bloch asserted the state failed to produce a statement made by Mrs. Kasulis to police at the time of the crime that “I was so scared I ran away before I could look at them (the robbers).” In court, however, she said Marcinkiewiczwas one of the bandits.

Judge Lynch rules that the police statement, if produced by the state, might have had a “very good influence on the jury.”

Marcinkiewicz changed his name to Ted Marcin and moved to California. With his eyesight failing and fearing that he would be committed to a convalescent home, he committed suicide in 1982.

CHICAGO (AP)—Joseph M. Majczek, whose wrongful 1933 murder conviction in the still-unsolved death of a policeman was the basis for the movie “Call Northside 777,” has died after a long illness.

Majczek, 73, died Sunday, but circumstances of the death were not publicized at his family’s request.

Following his 1945 release from prison, Majczek worked as an insurance salesman and with Cook County Circuit Court in several Chicago suburbs. For 30 years, he served as a Democratic precinct captain in suburban Oak Lawn.

Majczek also remarried the woman from whom he had been divorced when he was convicted.

He was confined to a mental institution for the last years of his life because of mental problems that began after a car accident and stroke, according to his family. 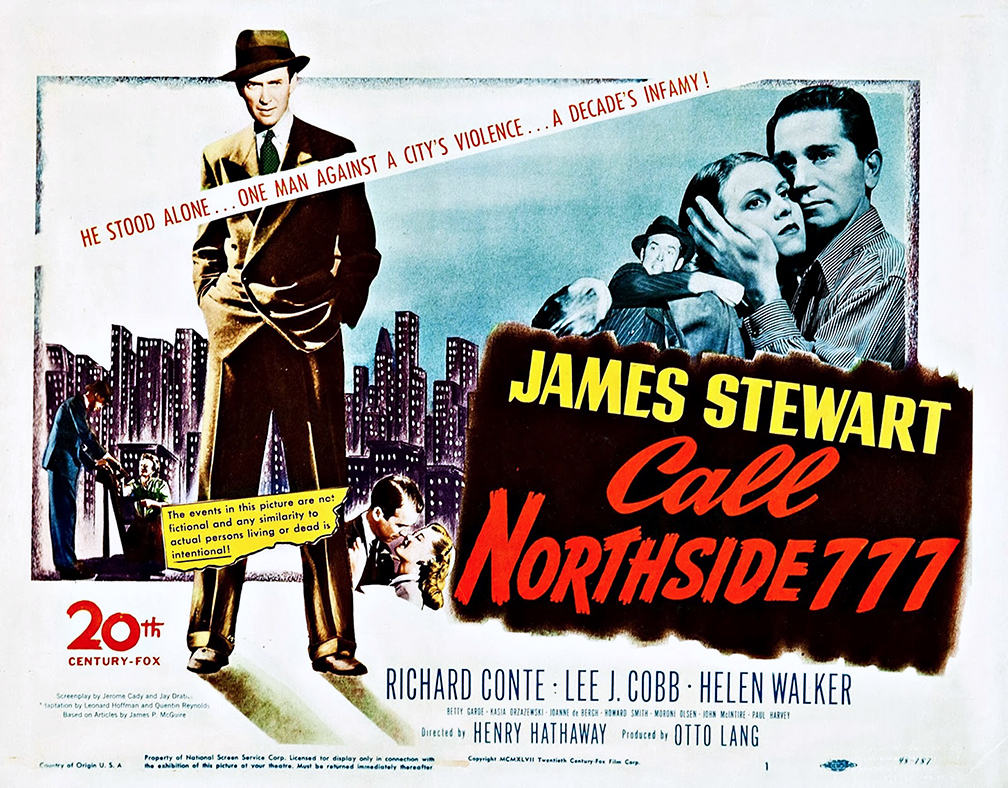 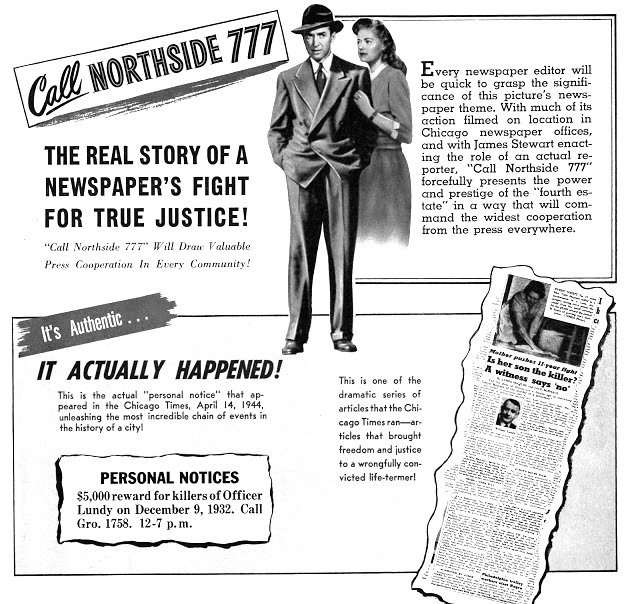