A Mississippi capitalist, Mr. C. C. Heisen, took out a permit for a six-story office building, 92×50 feet, northwest corner Dearborn and Quincy streets, to cost $60,000. It will be built immediately and in a first-class manner, the outer walls to be pressed brick with stone trimmings.1

Architects and Builders.
Busy as Beavers.
C. C. Heisen, not content with building the Temple Court Building, adjoining and to be made one with his office block, northeast corner of Dearborn and Quincy streets (that is, Temple Court), is rapidly erecting another office building down the east side of Dearborn street, between Van Buren and Harrison streets. Architects J. M. Van Osdel & Co. made the plans, and the great building will cover a flat 50×68 feet, and cosist of eight stories and basement. 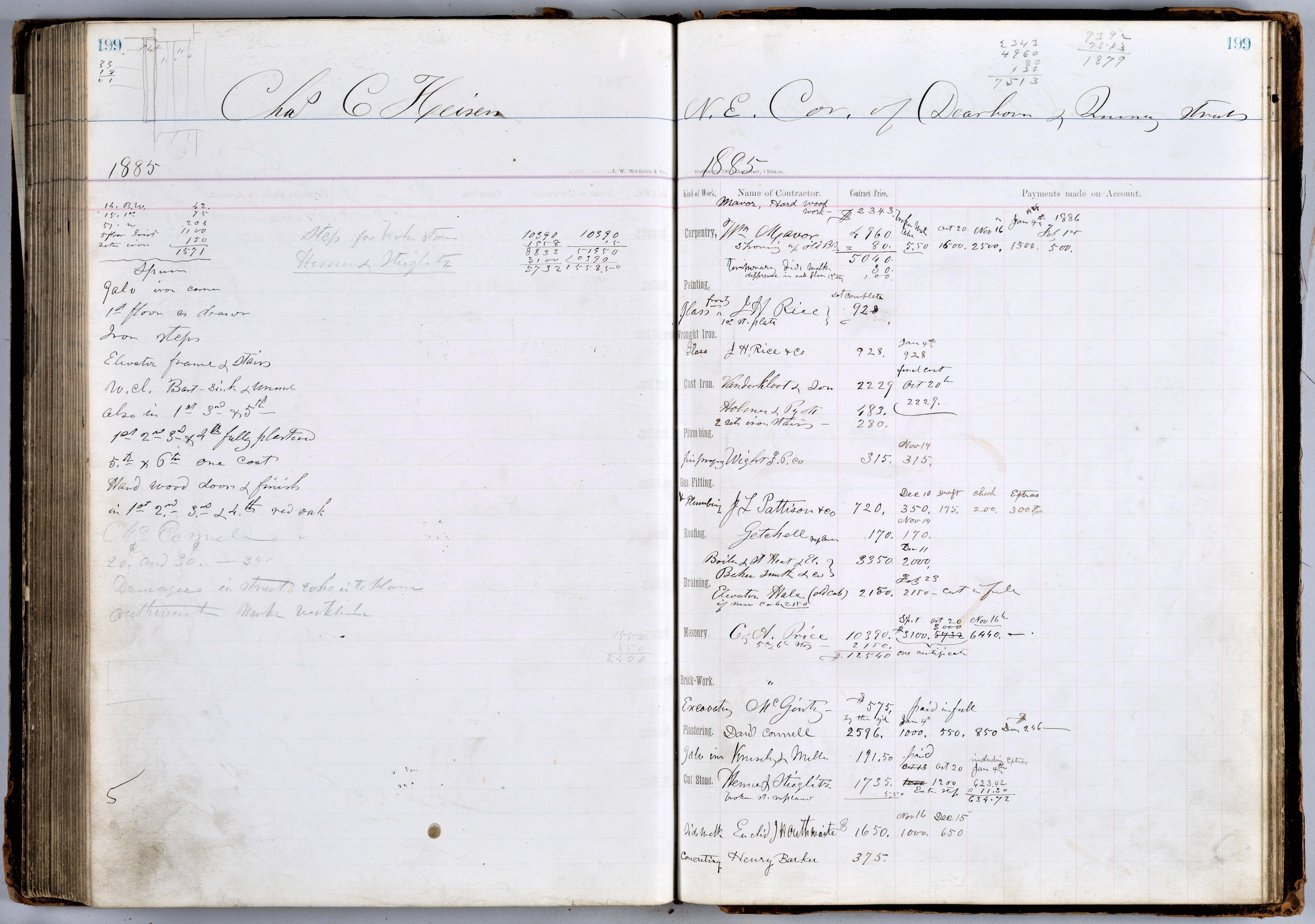 The Temple Court building, occuptying the northeast corner of Dearborn and Quincy streets, presents a rather plain front, relieved somewhat by the iron balconettes in the center of the facade. The eastern extension, however, compensates in a great measure for the plainness of the older building; for its great Romanesque entrance, Its Indian ornamentation and grand central baly, bring it into competition with the Phenix and Rookery. Why such a front should be hidden away on a short narrow street is one of the mysteries of the building arts in Chicago, The owners must have a prescience of the coming importance of that short street, as their neighbors on the east have shown their faith in it by the expensive remodeling of an old building. 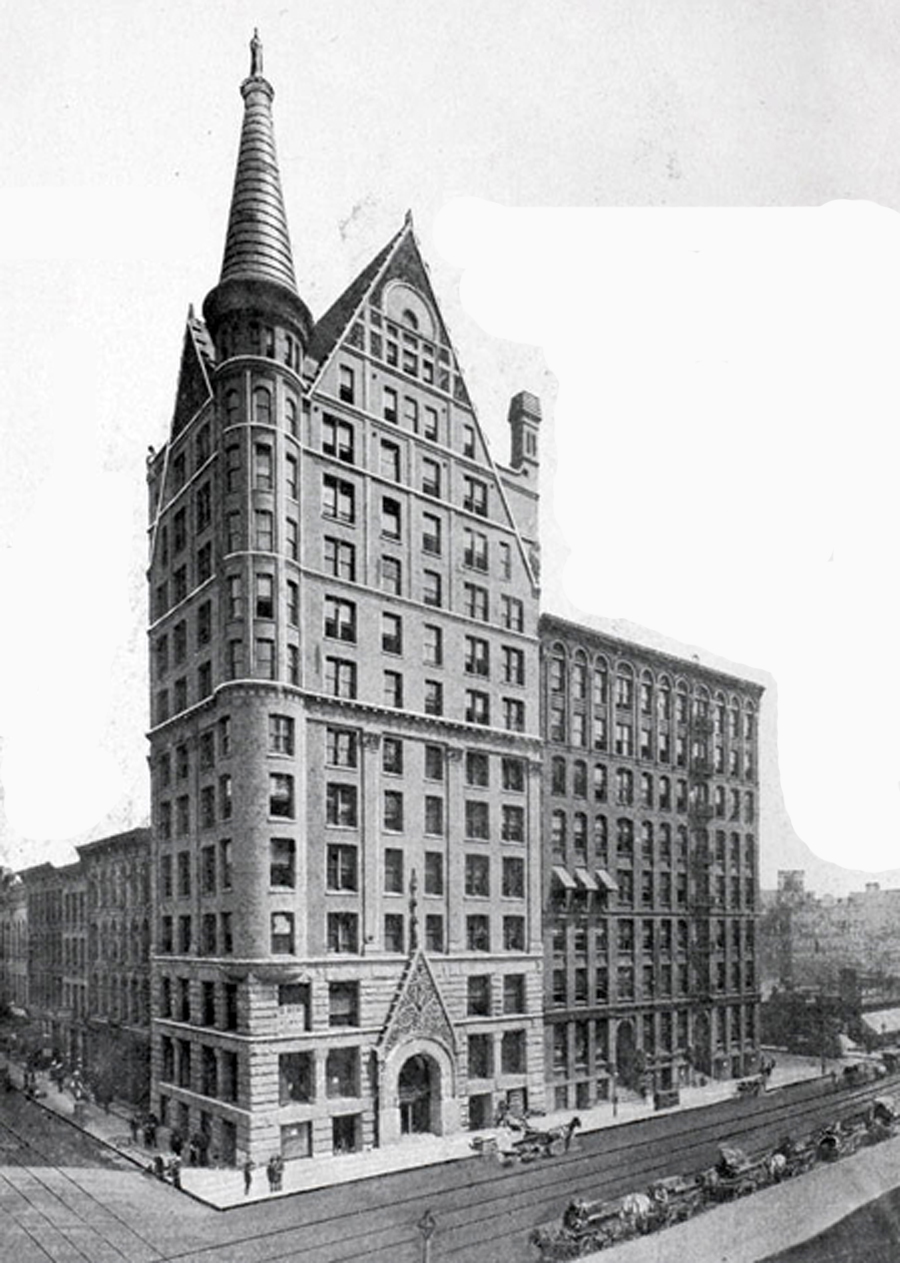 The Temple Court Building
Fronts 100 feet on Dearborn and 180 feet on Quincy Street, at the northeast corner, and is 100 feet high, with 9 stories and basement. It is built of stone, brick, and terra cotta. There are 8 stores, 400 offices, and 3 elevators. The occupants are coal dealers, capitalists, brokers, attorneys, scientific experts, manufacturers’ agents, and professional men. Erected in 1887. 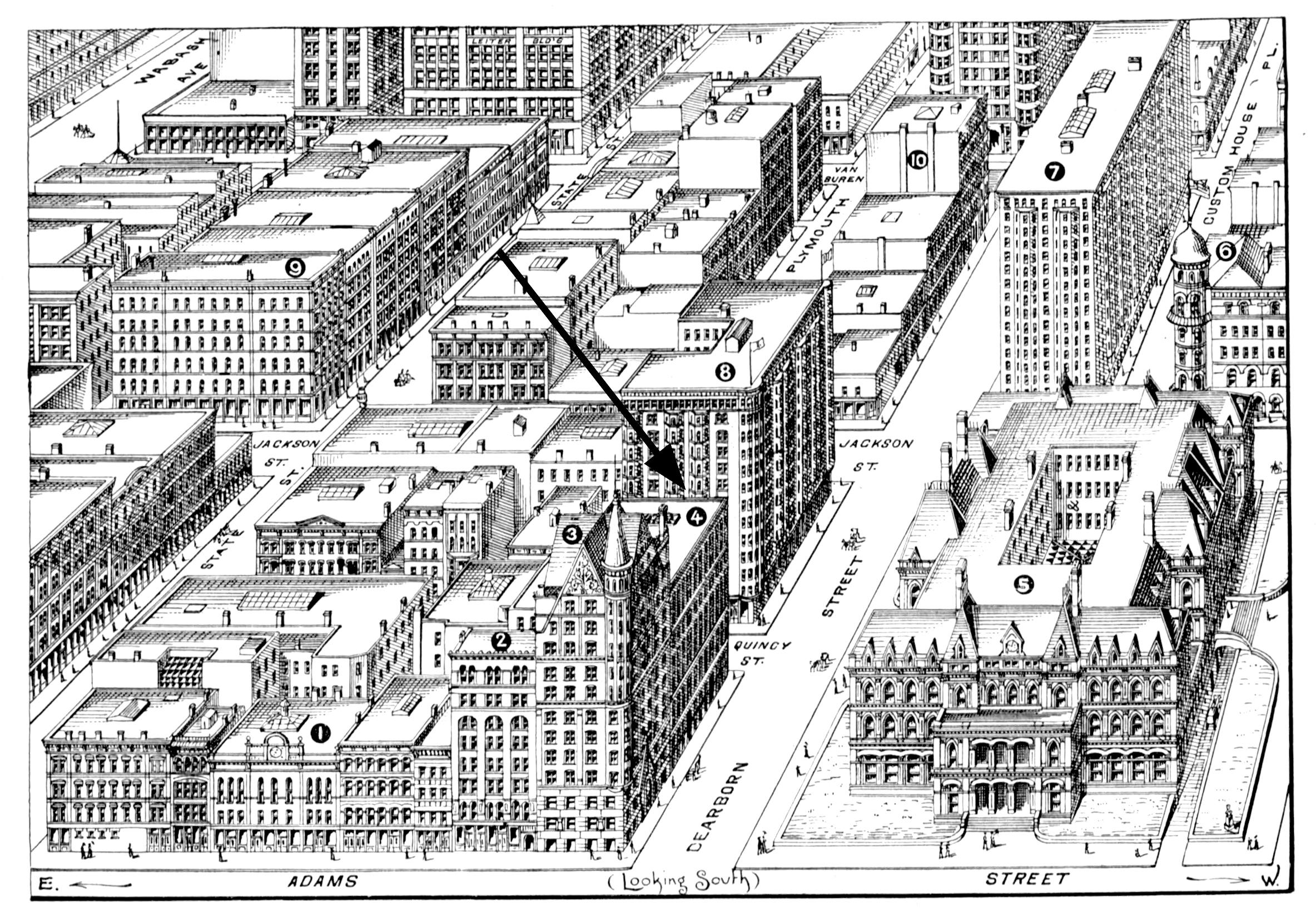 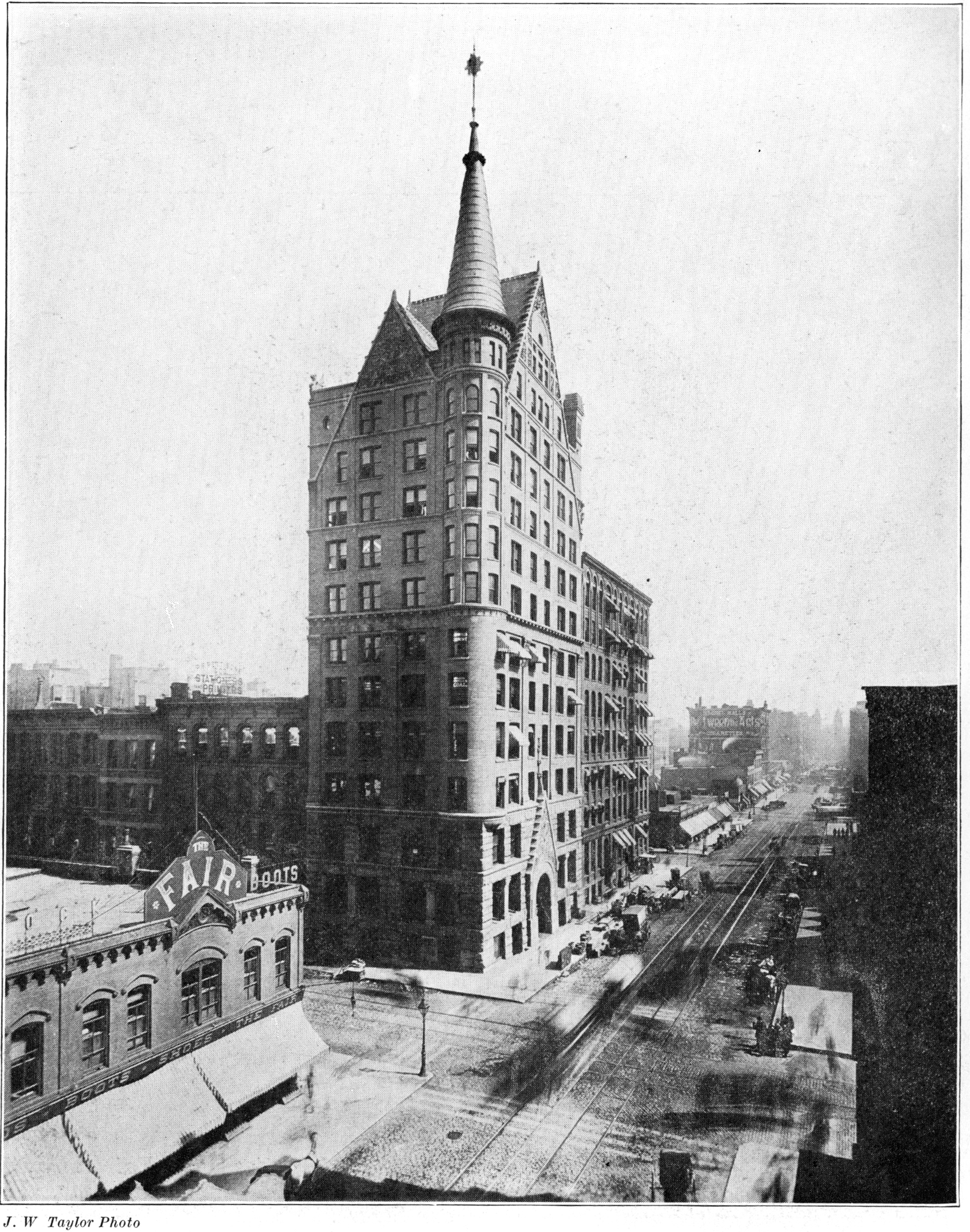 The corner of Dearborn and Adams streets in the late eighties, at the time when The Fair still had but two stories. On the northeast corner is the Owings Building (now the Bedford Building). South of the Owings Building and at the corner of Quincy Street is the Temple Court Building. At this time the Great Northern Hotel had not been constructed. 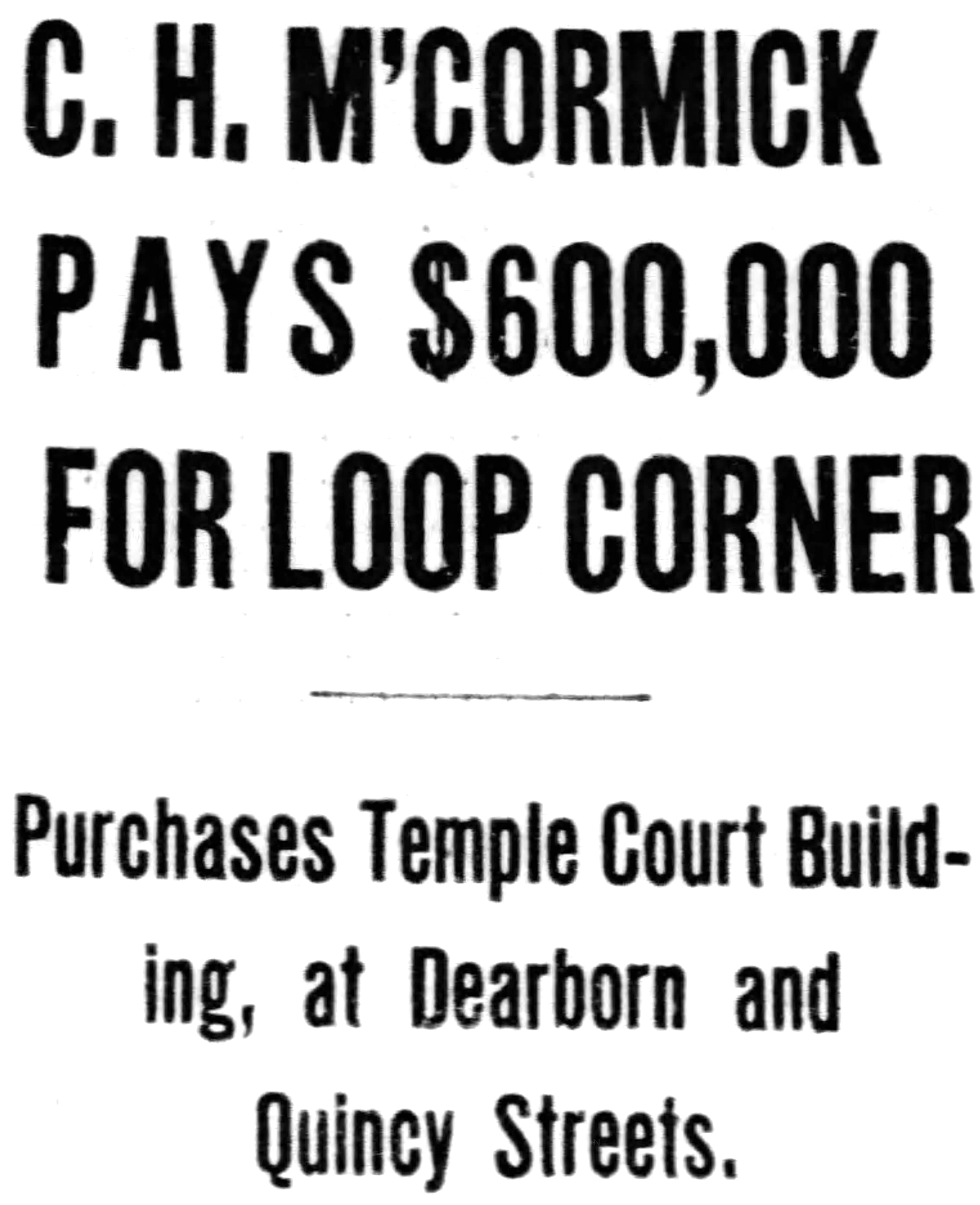 Cyrus H. McCormick yesterday acquired the Temple Court property at the northeast corner of Dearborn and Quincy streets from Mrs. Myrtle Heisen Bruce of Richmond, Va., daughter if C. C. Heisen, for a consideration of $600,000.

This gives Mr. McCormick control of the entire 165 feet of Dearborn street frontage from Quincy to Adams. He already owned the Bedford building at the southeast corner of Adams and Dearborn, with a frontage of seventy-three feet on Dearborn and a depth of fifty feet. The Temple court building has a frontage of fifty feet on Quincy and ninety-two feet on Dearborn street, and is improved with an eight story structure valued by the board of review at $62,500.

Mr. McCormick has no plans for immediate improvement. His purchase recalls the fact that negotiations were in progress some time ago for the property, an offer of $30,000 ground rental for 99 years being made. This would put a value of $750,000 on the property figuring on a 4 per cent basis.

Not counting the value of the improvements the present deal established a square foot value of slightly more than $133 for the property. The land is valued at $443,500 by the board of review. 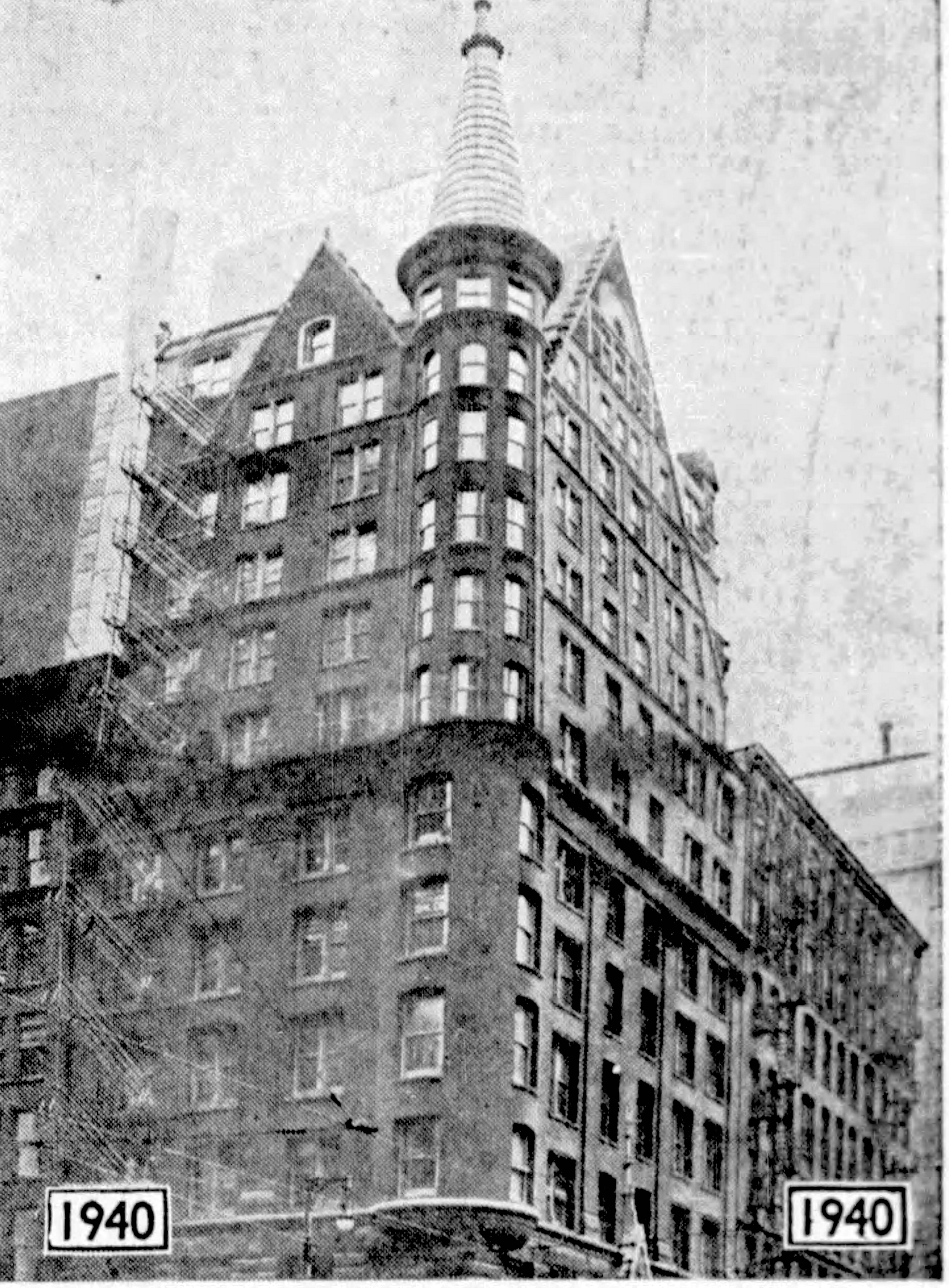 Bedford Building (left) and Temple Court building (right), on east side of Dearborn, between Adams and Quincy streets. Raising will start May 1.

When the Temple Court is razed the wreckers will start on the Bedford building. The contract calls for complete removal of both by Aug. 31. They are being removed to avoid heavy expenditures for caissons before the Dearborn street subway is built. 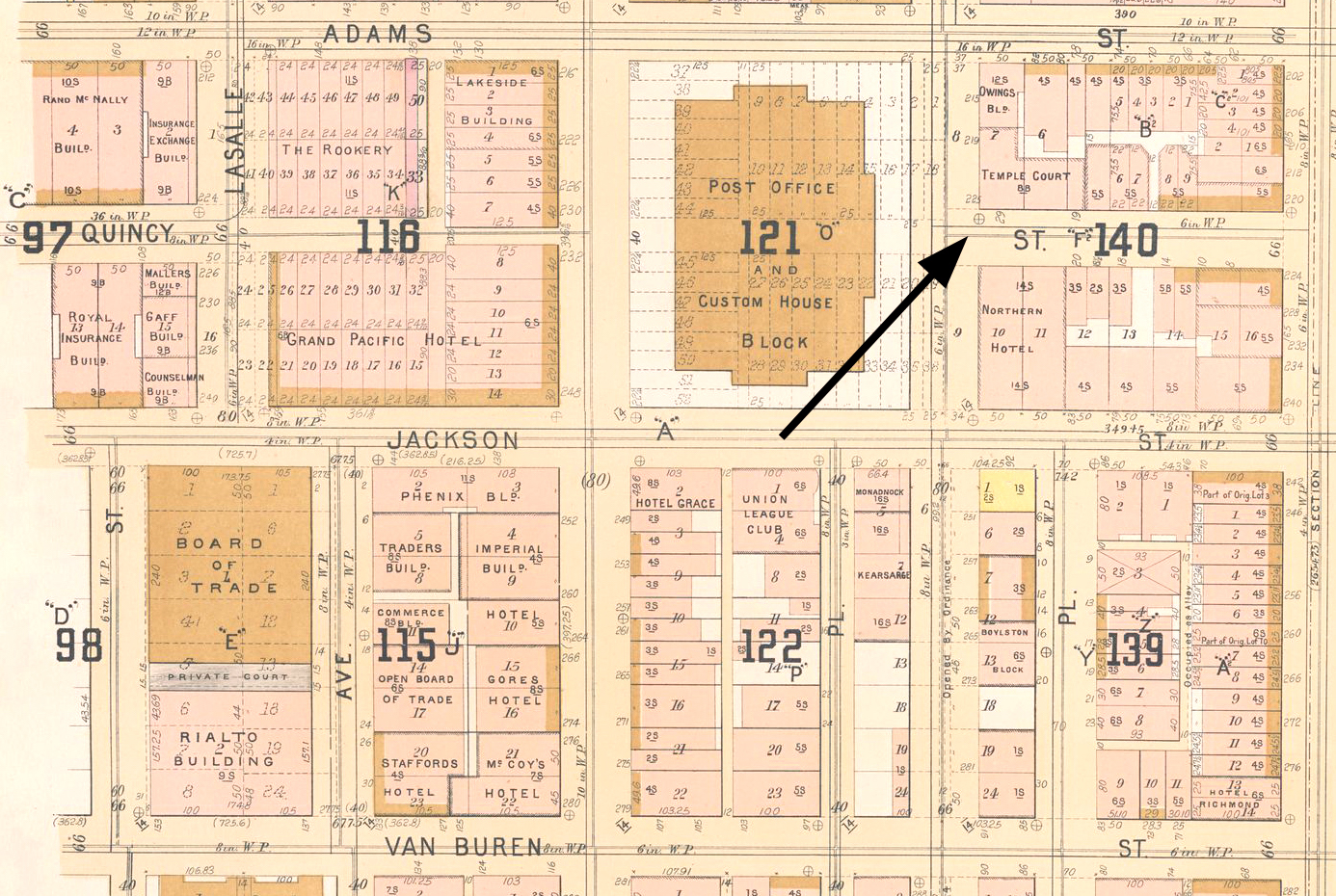 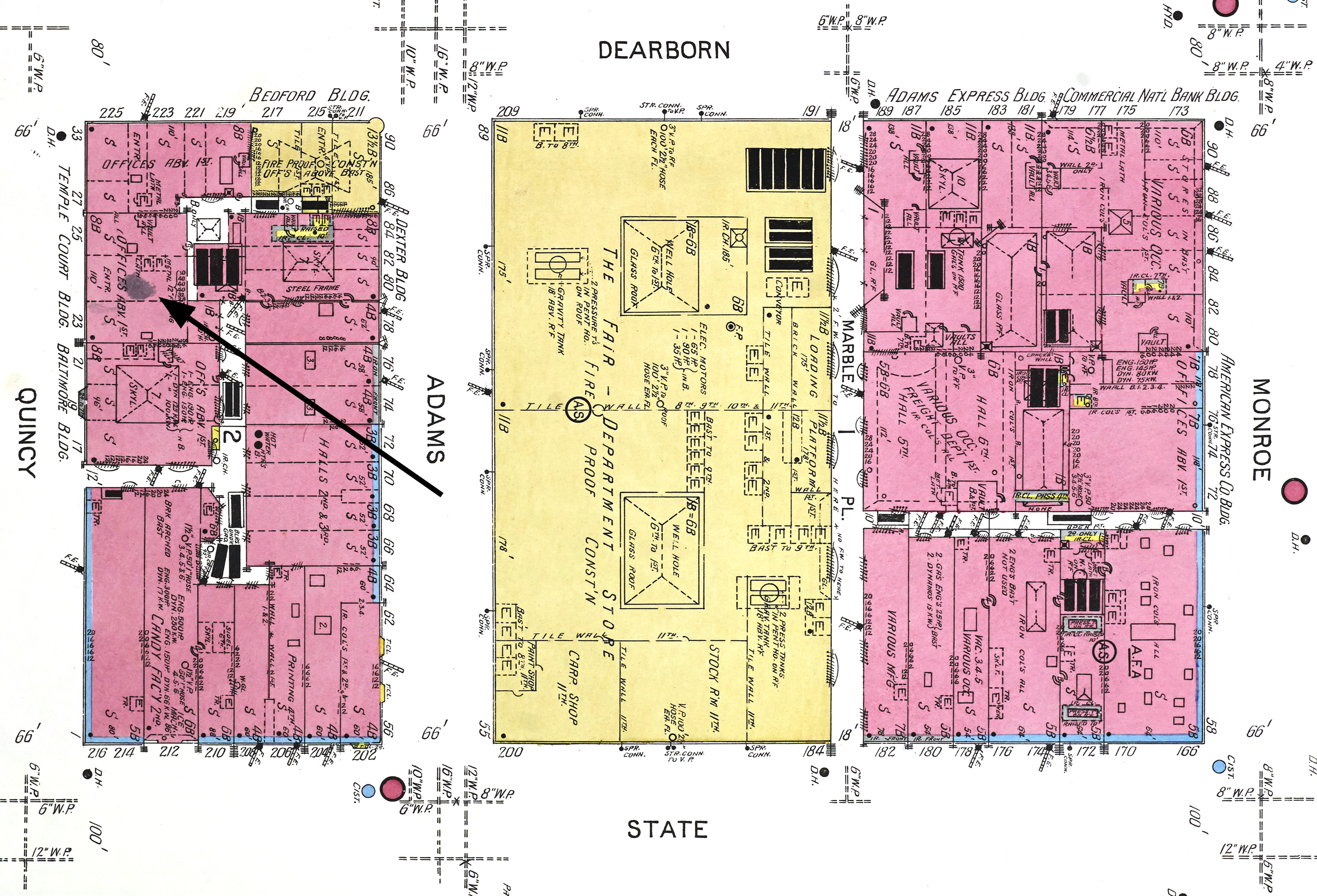 NOTES:
1 The article states “northwest corner Dearborn and Quincy streets,” which is in error since that corner doesn’t exist.