A Birthday Celebration.
Yesterday was the sixty-fifth anniversary of the birth of Mr. Martin Ryerson, one of Chicago’s pioneers, a sterling and enterprising citizen, who is putting as much money in substantial buildings as he can, because he believes in the city which is his home, and where he has built up a fortune through legitimate enterprise. Mr. Ryerson has just completed at the northeast corner of Wabash avenue and Adams street one of the finest and most substantila six-story buildings in the city, which is to be occupied by A. S. Gage & Co., the millinery and notion firm, of which he is a member.

As the firm took formal possession yesterday of the new house, the occasion was made one of pleasure, and during the afternoon Mr. Ryerson was accorded a reception in the building by a few of his many friends. On the top floor Kinsley had some “extra dry,” sandwiches, crackers and cheese, and some good cigars on hand, which added zest to the well wishes and good fellowship. Under the American flag floating from the roof, and out in “the nipping and eager air,” a toast was drunk to “the merchant and business man whose enterprise and energy was everywhere apparent in Chicago, and who always had a warm side for a friend”—Martin Ryerson. Gen. Anson Stager proposed the toast, and Gen. P. H. Sheridan made a happy response. There are two passenger and two large freight elevators in the building, and the ground floor will be finished throughout in cherry. Among those present were A. S. Gage, Lieut.-Gen. P. H. Sheridan, Gen. Anson Stager, D. D. Rhodes, John T. Lester, Edward Brewster, John DeKoven, N. K. Fairbank, S. A. Maxwell, Martin A. Ryerson, Henry Wilmarth, W. K. Sullivan, H. H. Getty. Charkes W. Wheeler, George Henry Wheeler, R. A. Peters, J. W. Polley, C. S. Longnecjer, Karl Stephan, Daniel Squair, F. L. Burg, L. A. Downs, F. N. Gage, George Haliday, Charles Brewer, H. A. Morse. 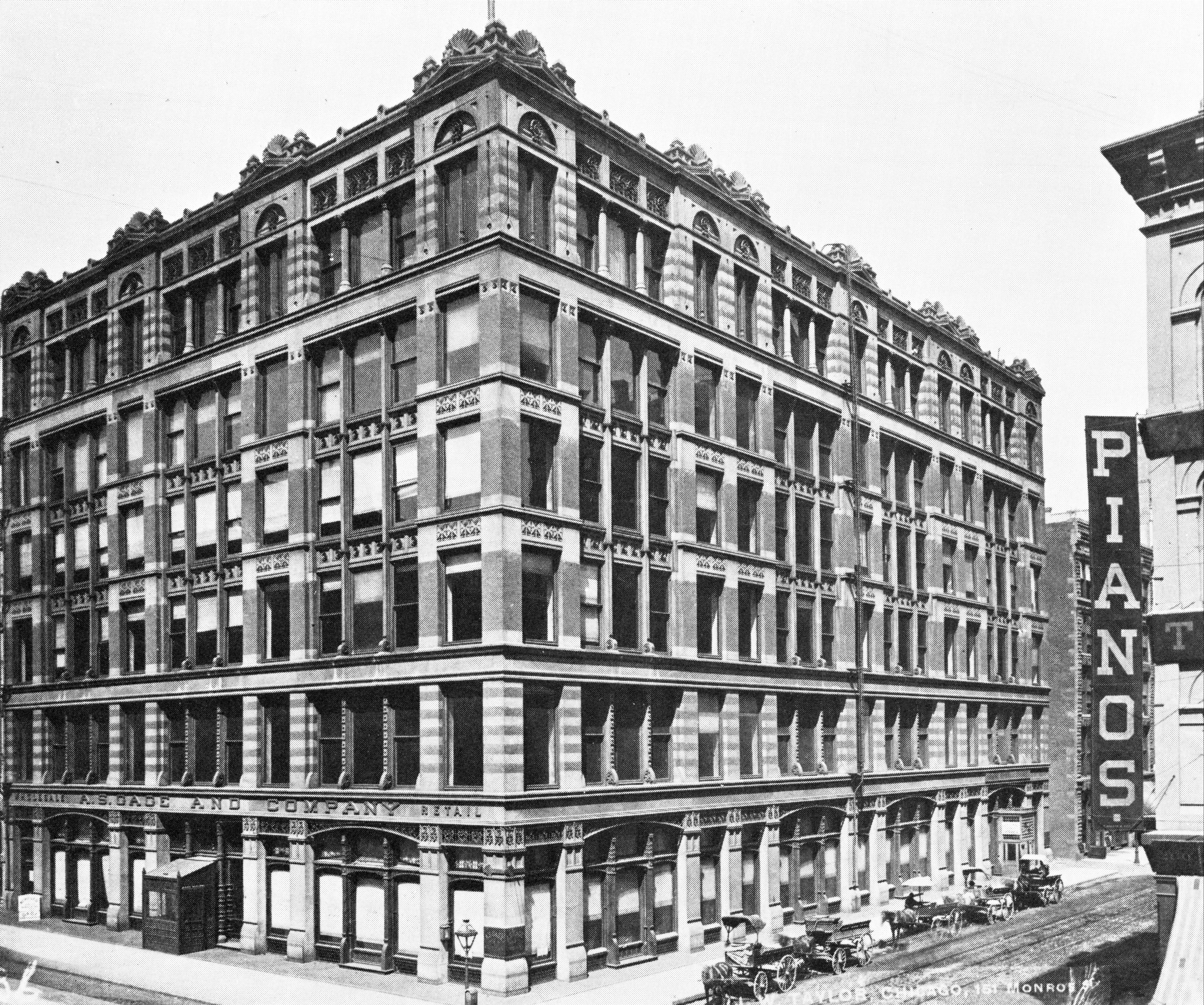 A. S. Gage Co. was established in 1856 (Haddock Building, 87 Lake street), under the firm name of Webster & Gage, and is, consequently, one of the oldest houses in this line of business in the Northwest. The following is a list of the various departments of the house, which will be found to comprise everything usually carried by a first-class wholesale Millinery, Notions, and Fancy Dry Goods establishment.

In addition they are large manufacturers of Ladies’ Hats, Bonnets and Hat frames, and all goods of this class. The manufacture of Corsets is also one of the leading features of their business, their capacity for producing these exceeding seventy-five dozen per ” day. Besides corsets of their own manufacture, they make a point of carrying in stock a full line of every make of Corset that has in any way met with the approval of the trade and the public. This Corset stock alone occupies an entire floor of 45×1.75 feet, and the boxes are piled up to a height of ten or twelve feet over the entire space. This is by far the largest stock of Corsets that is carried by any one house in America. is a fact that 75,000 women could be supplied with Corsets at one time from this stock.

The store occupied by this firm at the corner of Wabash avenue and Adams street, was built by the special partner of the house particularly and expressly for their use, and is conceded by all to be the finest mercantile building of its size in the United States, and it contains more square feet of available space than any wholesale millinery house in the world.

While each department of this establishment is under the management of a fully qualified and experienced buyer, the entire business is conducted under the personal control and supervision of Mr. A. S. Gage, and his systematic management, conspicuous enterprise, and promptitude in all transactions, makes this more than a desirable house with which to cnltivate pleasant and profitable relations. 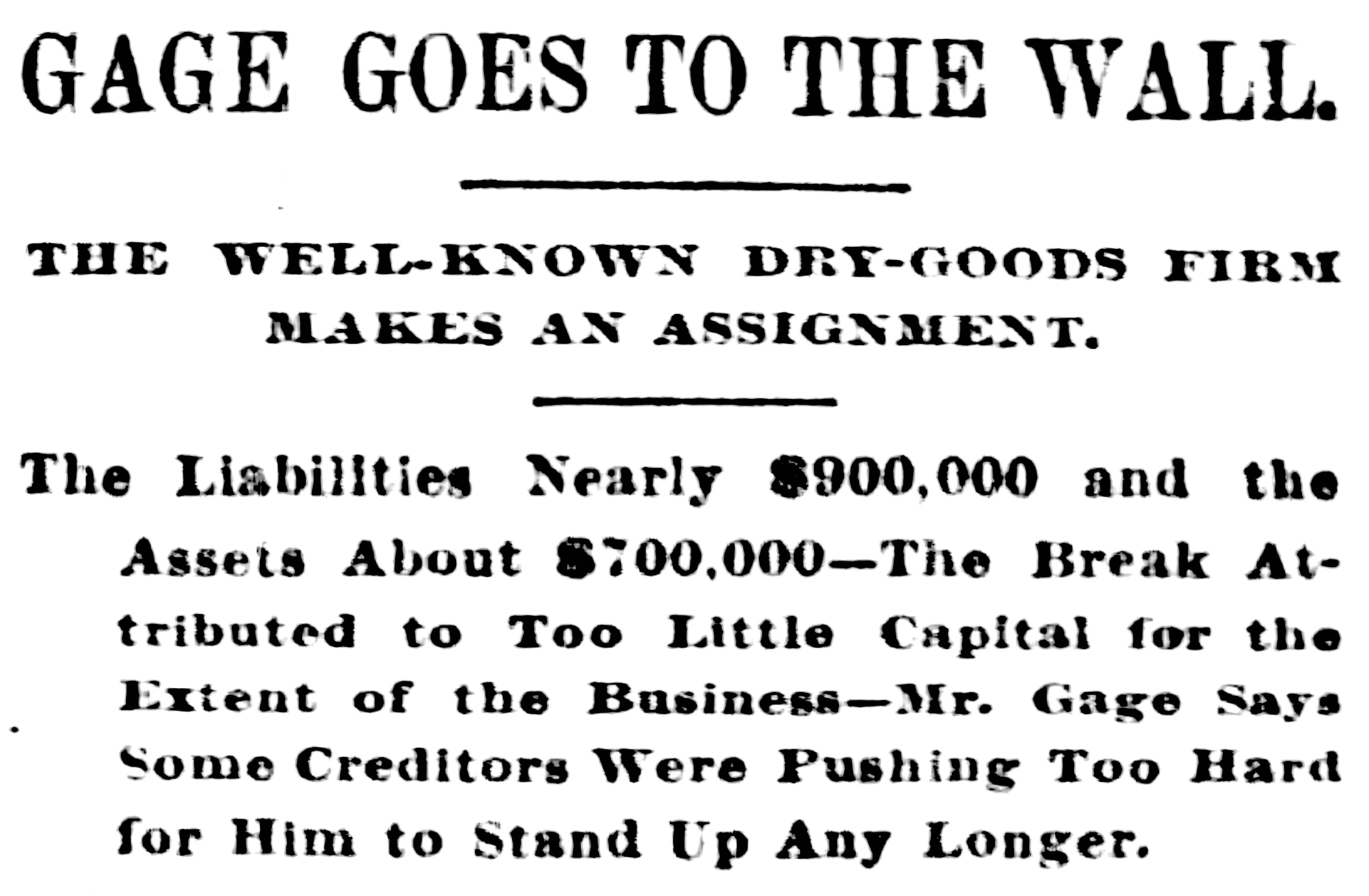 The firm of A. S. Gage & Co. made an assignment yesterday morning, and the First National Bank entered up a judgement against them for $96,851. $900,000, while the assets will not exceed $650,000. A struggle for possession took place and the assigned came out ahead. The failure had been anticipated for fully six months and was not a surprise to bankers and merchants. The cause was, in brief, lack of capital. 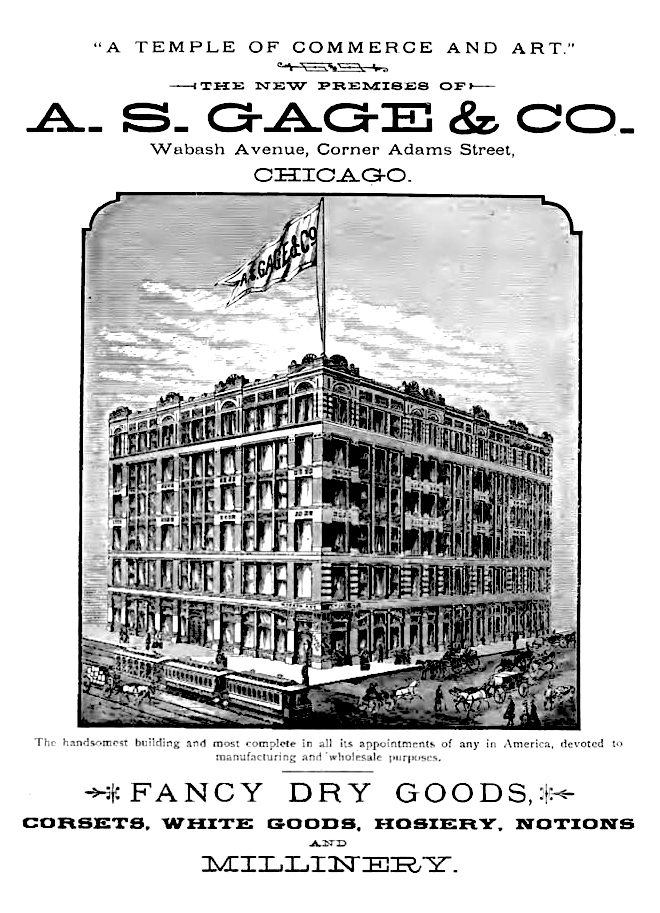 The original firm, established in 1857, was known as Webster & Gage and occupied the second floor of the Haddock Building, No. 87 Lake Street. Only millinery was dealt in. A year or two before the (1871) fire Mr. Webster went out and the firm of Gage Bros. & Co. was formed. Notions and white goods were added to the stock. This partnership continued until the close of 1882, when John N. Gage retired, and the firm of A. S. Gage was organized. It consisted of A. S. Gage and Seth Gage, his uncle. In January, 1885, Seth Gage sold out. The same name was retained, the partners being Eliphalet B. Gage, a cousin, who is interested in mining in Idaho and Montana, and Martin Ryerson. The latter, it is said, put in $100,000, which was paid to Seth Gage for his interest. At this time the firm occupied its present store at the corner of Wabash avenue and Adams street. A year or two before dry goods and cloaks had been added. Business was dull and collections slow in the latter part of 1885, and, in order to get money, the firm began to retail. Two months afterwards, the dry goods on hand were sold to James H. Walker & Co., presumably at a loss. In March of this year the retail business was resumed with new goods and paying business was done. The stock, however, had been bought on credit, and, when the first note came due, the cash on hand was absorbed. More money was raised by discounting paper and paid out, but the bills began coming in so fast that Mr. Gage concluded that the only way to protect all the creditors was to make an assignment. He selected Henry J. McFarland of M. D. Wells & Co. and gave him the paper a little after 10 o’clock yesterday morning. The doors were closed when the store was full of customers, who were somewhat astonished at the proceeding, not knowing that the object was to keep out the Sheriff.

A CHANGE OF BASE
One of the most important announcements in retail circles is the removal of Carson, Pirie & Co. from the West to South Side. It is understood that their present West Side business will be closed out within the next thirty days, and the South Side establishment will be opened with an entire new stock. The new South Side establishment will occupy the elegant store at the corner of Wabash avenue and Adams street, formerly occupied by A. S. Gage & Co. This new departure, it is understood, will in no way interfere with or disturb any of the other enterprises in which the firm is engaged. The business men of Wabash avenue are to be congratulated on the accession to their number of such a popular and able firm. The movement indicates the tendency of retail business toward Wabash avenue. 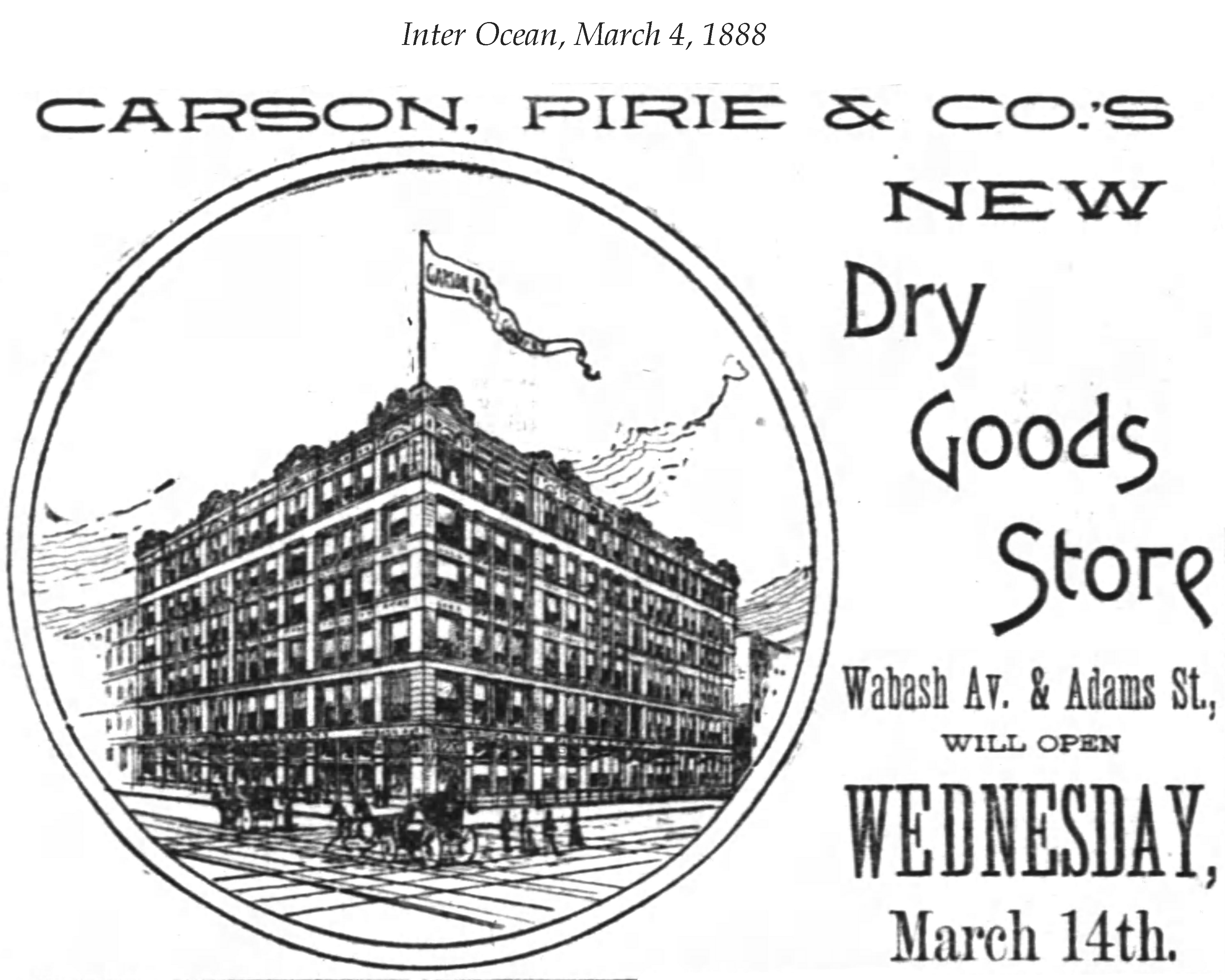 CARSON, PIRIE & CO.’S OPENING.
For some time the ladies of Chicago hare not been treated to a bona fide opening; in fact, not all the winter has there been a new store opened, until yesterday, when Carson, Pirie & Ca threw open the doors of their handsome new home at the northeast corner of Wabash avenue and Adams street. The ladies fairly reveled in the absolute newness of everything, from the front door to the back part of the second floor. Everything was bright, new, and fresh, and if a reward had been offered, for some old-style affair or pattern, it could not have been paid, because that is about the only order for the new establishment could not fill. The store, as everybody knows, is the one where Gage & Co. departed this life and it is admirably suited to the needs of the business. It was built with the idea of stability for the wholesale trade, and, of course, is more than substantial enough for the retail stocks. The aisles are wide, which every lady will consider a grand blessing. There is plenty of room to show goods and to pass through without being crushed. The firm occupy the basement, first and second floors, and the goods are allotted as follows:

In the basement are the domestics and heavy drygoods; on the first floor are the dress goods, drygoods, fancy goods, boots and shoes, hosiery, gloves, notions and such like articles; on the second floor are white goods, underwear, suits, cloaks, shawls, millinery and upholstery. The display is every department was attractive from the vast amount of new patterns and designs in everything. The spring and summer goods were shown in abundance and made one feel cheerful in spite of the long-drawn winter which continues to linger. The ladies came into the store all day in droves and swarms and feasted upon the bright things shown, for the spring and summer of 1888.

Mr. Andrew McLeish, of the firm, stood smiling by the door welcoming the thousands of ladies who came to see the store. Mr. C. H. Constant was kept busy looking after the smooth working of the establishment. The grand staircase that leads up to the second floor was crowded with visitors trooping up and down all day long. Every showcase where there was something new in a clonk or dress was constantly surrounded with a bevy of ladies, who admired and took ample notes of the cut and style in every detail. In the millinery department the new shapes and patterns of spring bonnets and hats were greatly admired. The new establishment opens with the most positive success, and will be te beginning of a new era for Wabash avenue.

CARSON, PIRIE & CO.’S FALL OPENING.
Messrs. Carson, Pirie & Co. at the corner of Adams street and Wabash avenue, had their annual fall opening yesterday. From a early hour the building looked, what it is, a veritable hive of industry, crowded in all parts, everyone busy and contented. A walk through the building is an interesting study; as you enter the door, which is obsequiously opened for you by a boy in buttons, you see on your right an umbrella-stand, where, if you choose, you can leave it in charge of another boy, who will give you a check for it. A pleasant odor of perfumeries greets you, providing the close proximity of the counter of druggists’ sundries. On this floor there is the boot and shoe department; hosiery, gloves, jewelry that would put to the blush any jeweler’s store in the city, white goods, laces, embroidery, linens, fancy art goods, and handkerchiefs. In another department there are ribbons, trimmings, silk dresses, and domestic articles.

An elevator takes you to the second floor, and here is the sort of place a lady likes to sit and revel in all day, for in the Parisian bonnet and hat department there are perfect little gems in the shape of hats and bonnets, that set other women dying of envy for the one who is the proud purchaser. Then the feather department—what a sight! Ostrich feather, the proud plumes of birds of paradise, and the feathers of all the flying tribe are here fittingly represented. In various elegant flower-pots all over this place are charming bouquets, and in other parts, marble statues. Other things here are beautiful sealskin cloaks and suits, and in another department there is a fine display of fancy flannel and blanketings. 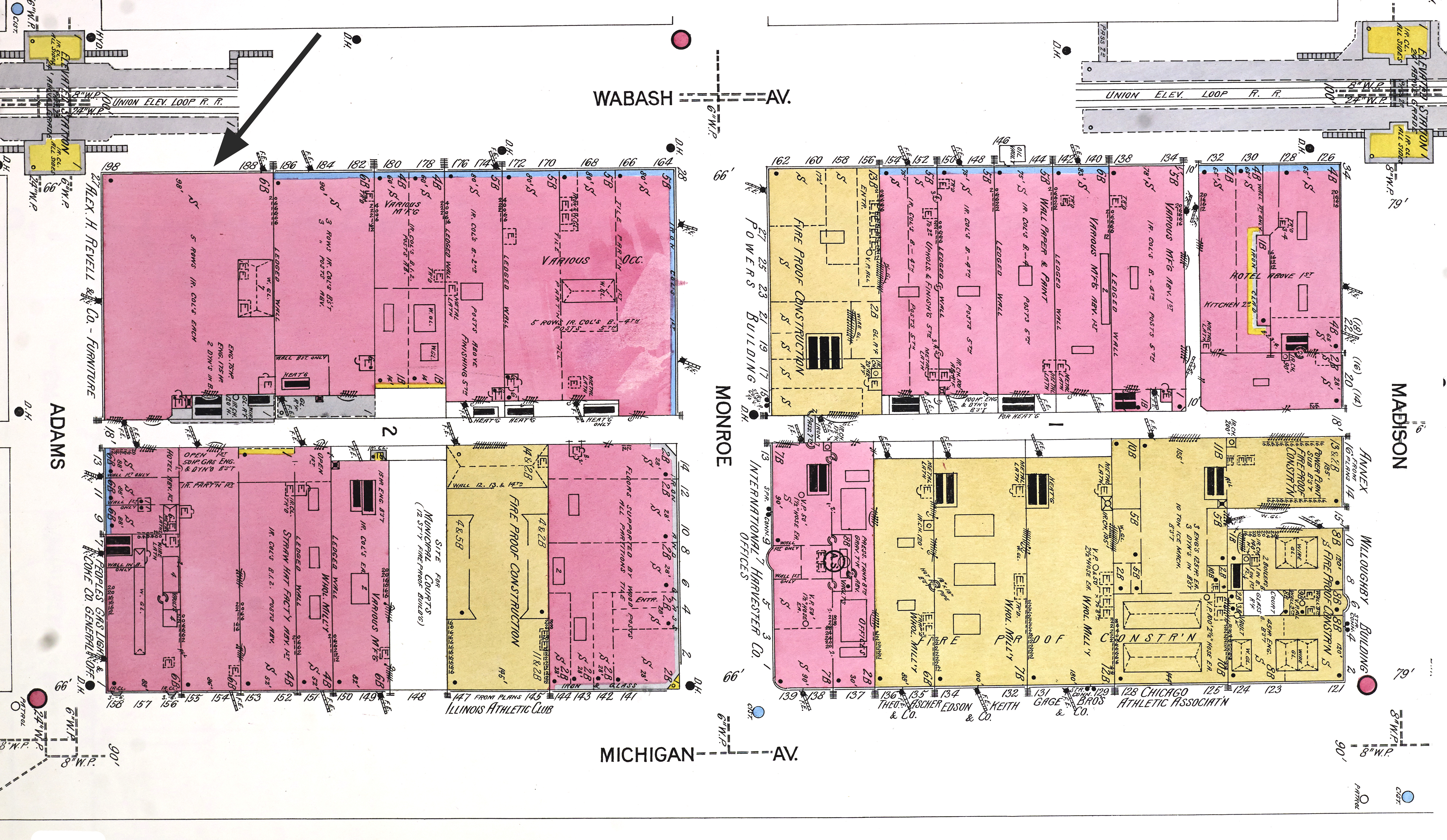