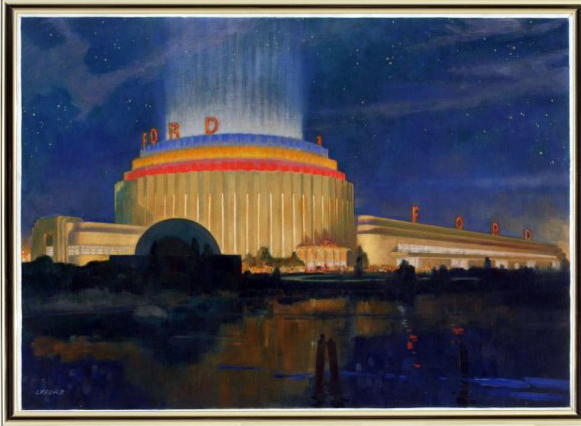 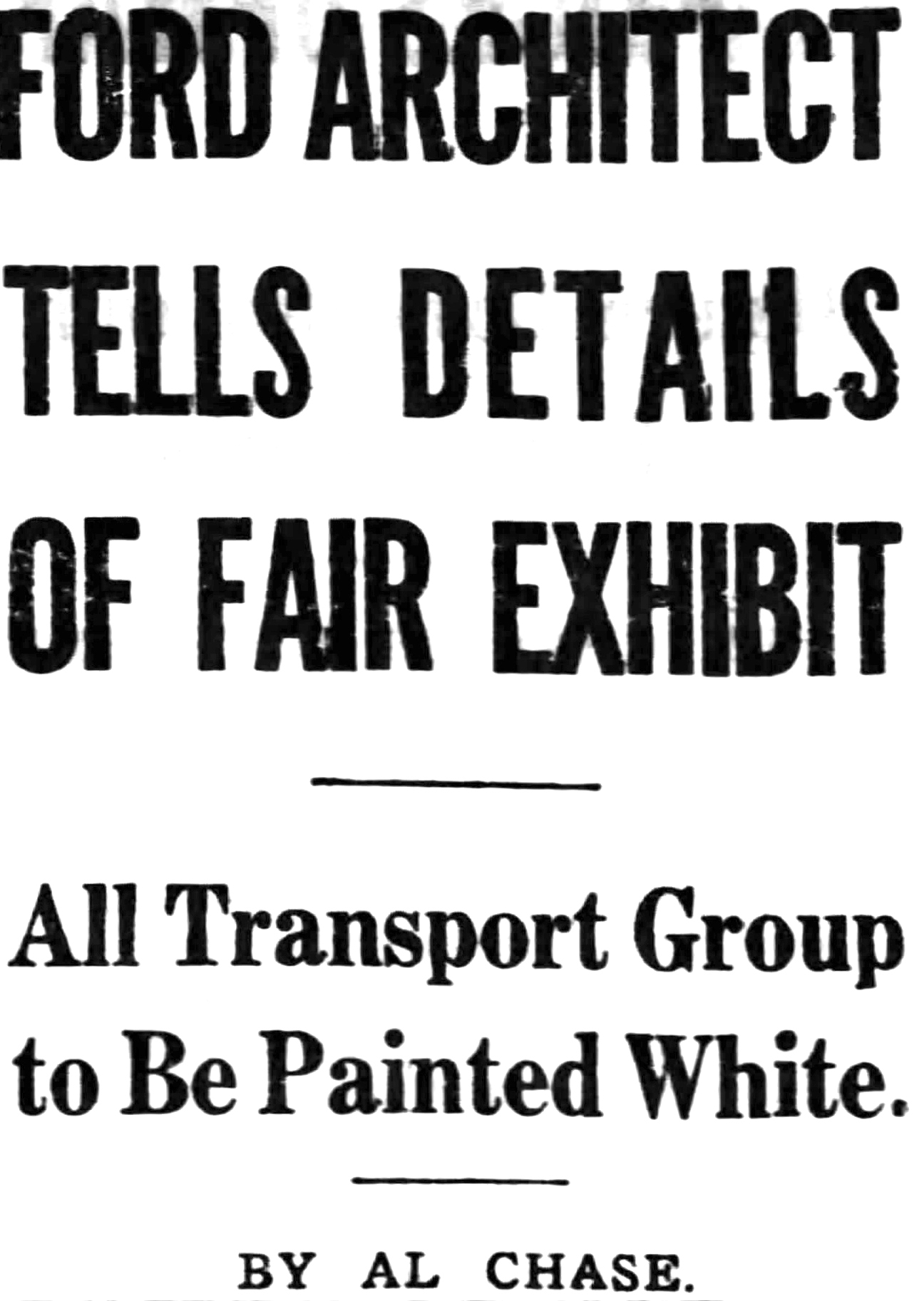 Albert Kahn of Detroit, who designed two hundred million dollars million dollars worth of buildings for Henry Ford, as well as many millions for General Motors, last night revealed details of the Ford exhibit at A Century of Progress, of which he is architect.

Mr. Kahn, who also designed the General Motors building at the Fair, told members of the Chicago chapter of the American Institute of Architects and the Illinois Society of Architects, at a joint meeting at the Architects club, that white will be the predominating color scheme of the entire transportation group.

Mr. Ford’s recollections of his his visit to the 1893 World’s Fair and his sightseeing at A Century of Progress last year both influenced him in his decision on certain features of the Ford exhibit.

His trip to the Columbian exposition in ’93 was so inspirational in its effect on his business career, that he declared his exhibit at A Century of Progress must be inspirational as well as educational, not merely a show.

Last summer Mr. Ford got so tired tramping around the World’s Fair and he had so much difficulty in finding seats that he said ‘We’ve got to have plenty of seats and comfortable ones at that.’

He wanted exhibits of the actual manufacture of materials and parts used in making a Ford car but he said ‘O, what’s the use of showing a complete Ford? You can see ’em anywhere.’ and it took a lot of argument to change his mind.

Henry Ford doesn’t believe in waste, so he insisted his World’s Fair buildings be built so that they can be salvaged and rebuilt later at some other location and used for factory purposes if necessary.

Mr. Kahn said that although the Ford building will be white during the day it will be a gorgeously hued structure at night.

We’ll use three colors, red, blue and green. One night the buildings will be entirely red; the next night green and the third blue. Thirty million candle power search light beams will shoot up into the air from the walls of the circular unit.

Mr. Kahn said that on the park across from the Ford buildings an exhibit to be known as “Roads of the Ages” is contemplated where every kind of road from early Roman pavements to the 1934 concrete superhighway will be shown.

Ford Building
The dome, 200 feet in diameter, represents the giant cogs of a set of gear wheels. The building embodies new principles of electric illumination, both for lighting and for spectacular effects. Nearly four acres of floor space are devoted to educational and industrial exhibits. Albert Kahn of Detroit is the architect.

Main entrance is through the rotunda. Here 67 vehicles of different eras show the development of wheeled vehicles from the Egyptian chariot to the motor car of today. Around the rotundaconcourse
is a series of photo murals 20 feet high and 600 feet long.

Middle of the rotunda is the Court of the World, open to the sky. An electrically revolved globe 20 feet in diameter is in the center.

Looking upward at night, the visitor gazes into a weaving mass of colored clouds of ceaselessly changing patterns, from which rises an enormous pillar of clear, white light that under proper atmospheric conditions attains the height of one mile. Twenty-four 38-inch projectors of 5000 watts are used to create the pillar of light.

By all accounts, the Ford Building, with its gigantic globe highlighting Ford’s operations around the world, was the most popular corporate attraction at the 1934 fair.

Brochure, “Ford at the Fair,” Century of Progress Exposition, 1934
Sales Brochure, “Know the Thrill of Driving the New Ford V-8,” 1934 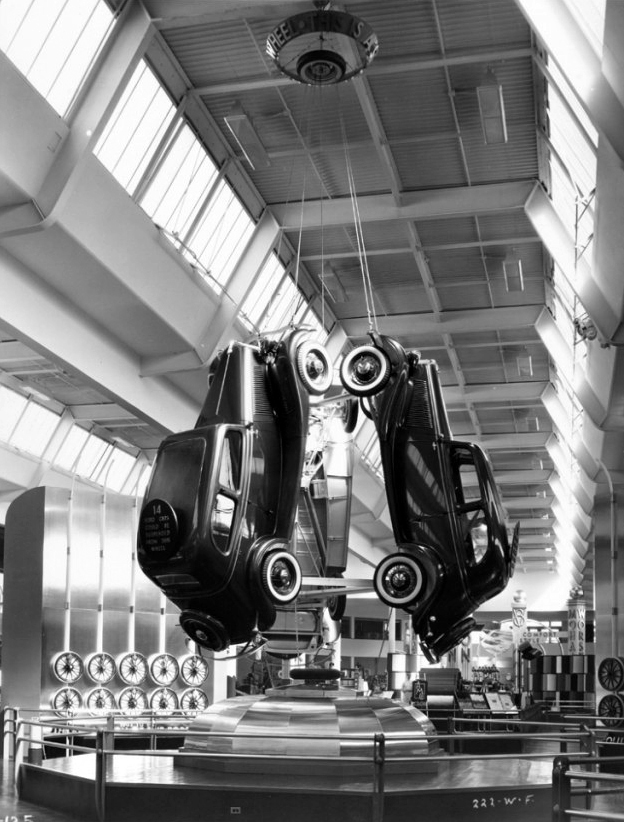 Roof of Safety Exhibit, Ford Building, 1934
Three Ford V-8’s are suspended from the rim of a welded steel wheel of the type used on all our Ford V-8 cars. 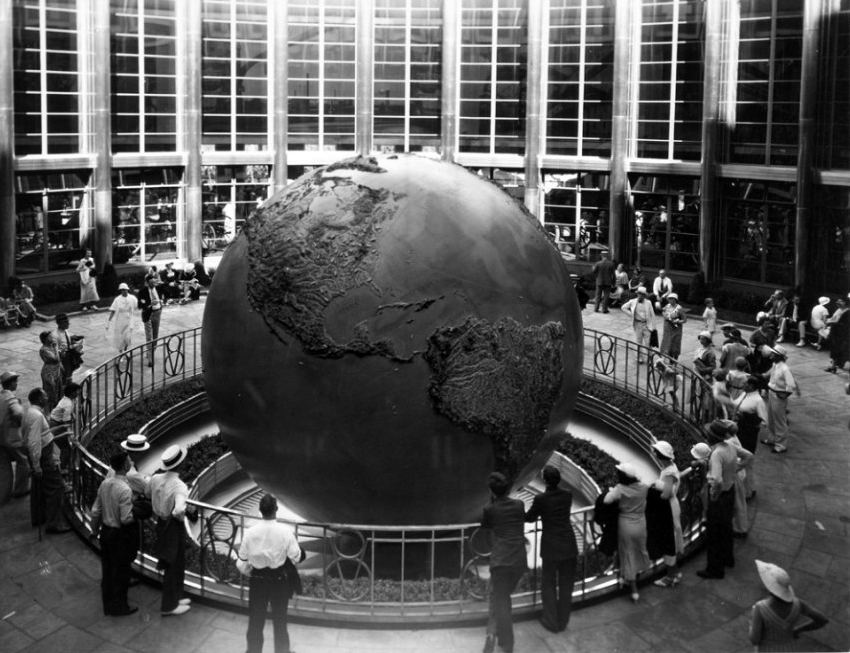 Globe in Court of the World, Ford Exhibition Building, 1934

Ford’s centerpiece exhibit, “Ford Industries Cover the World” is a huge rotating globe that identifies the locations of the company’s production plants around the world. 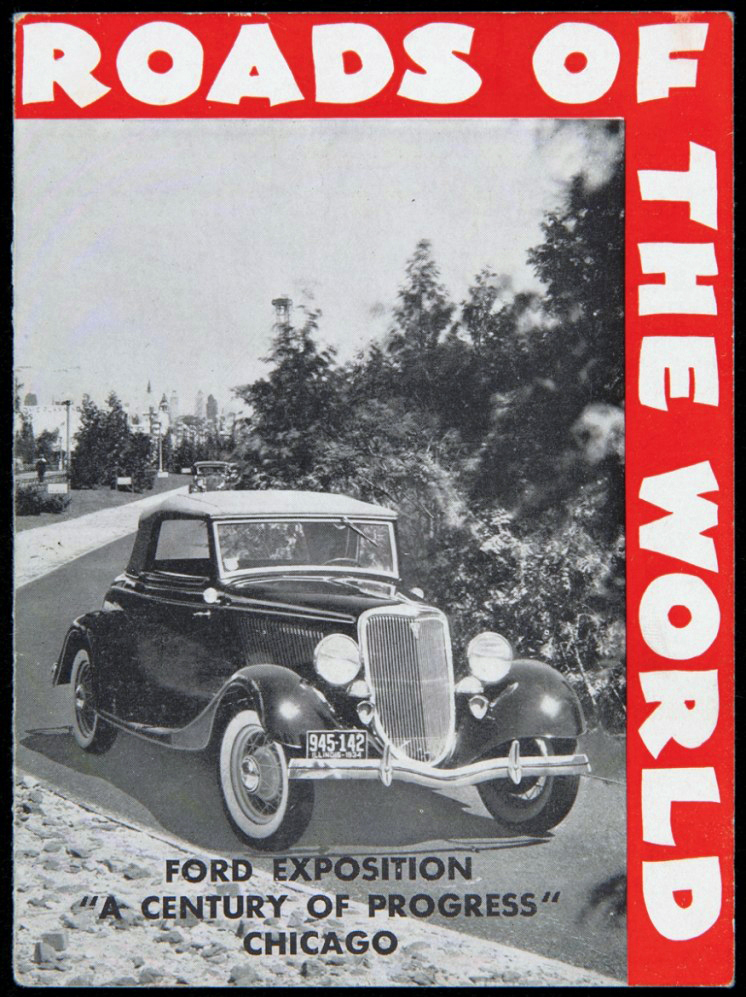 Outside of the Ford Exposition building there is the impressive “Roads of the World” display. This large oval track features 100-foot-long sections that resemble 19 world-famous thoroughfares, ranging from the earliest Roman roads to the smooth paved highways of today. 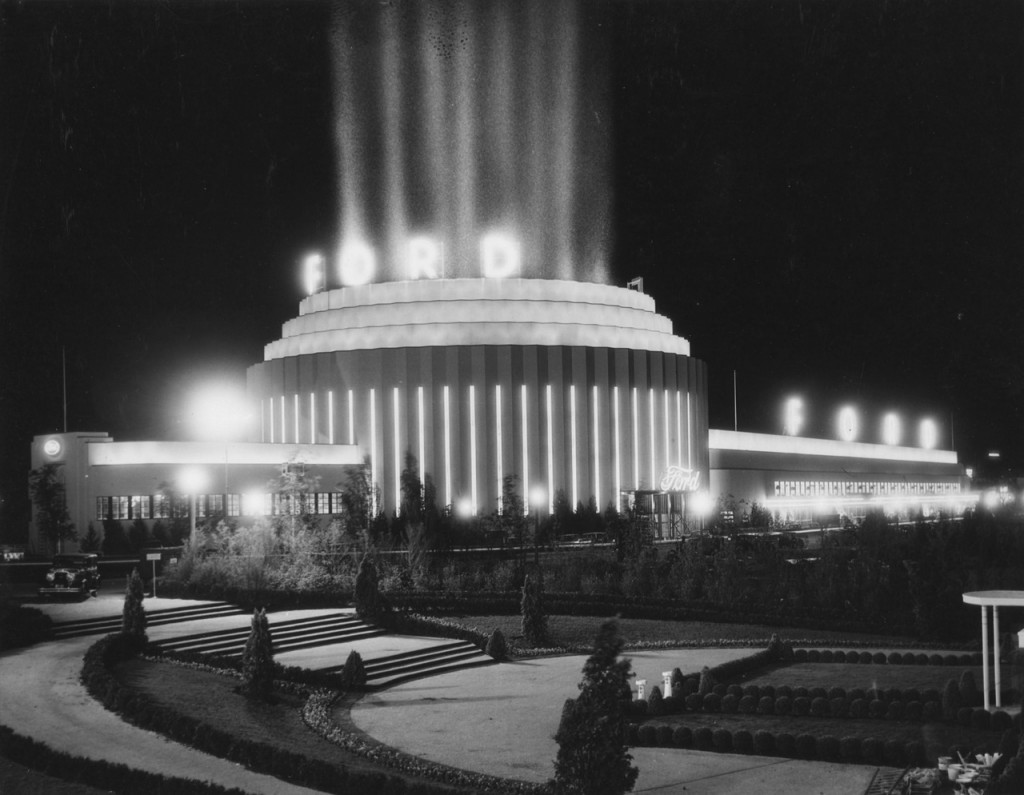 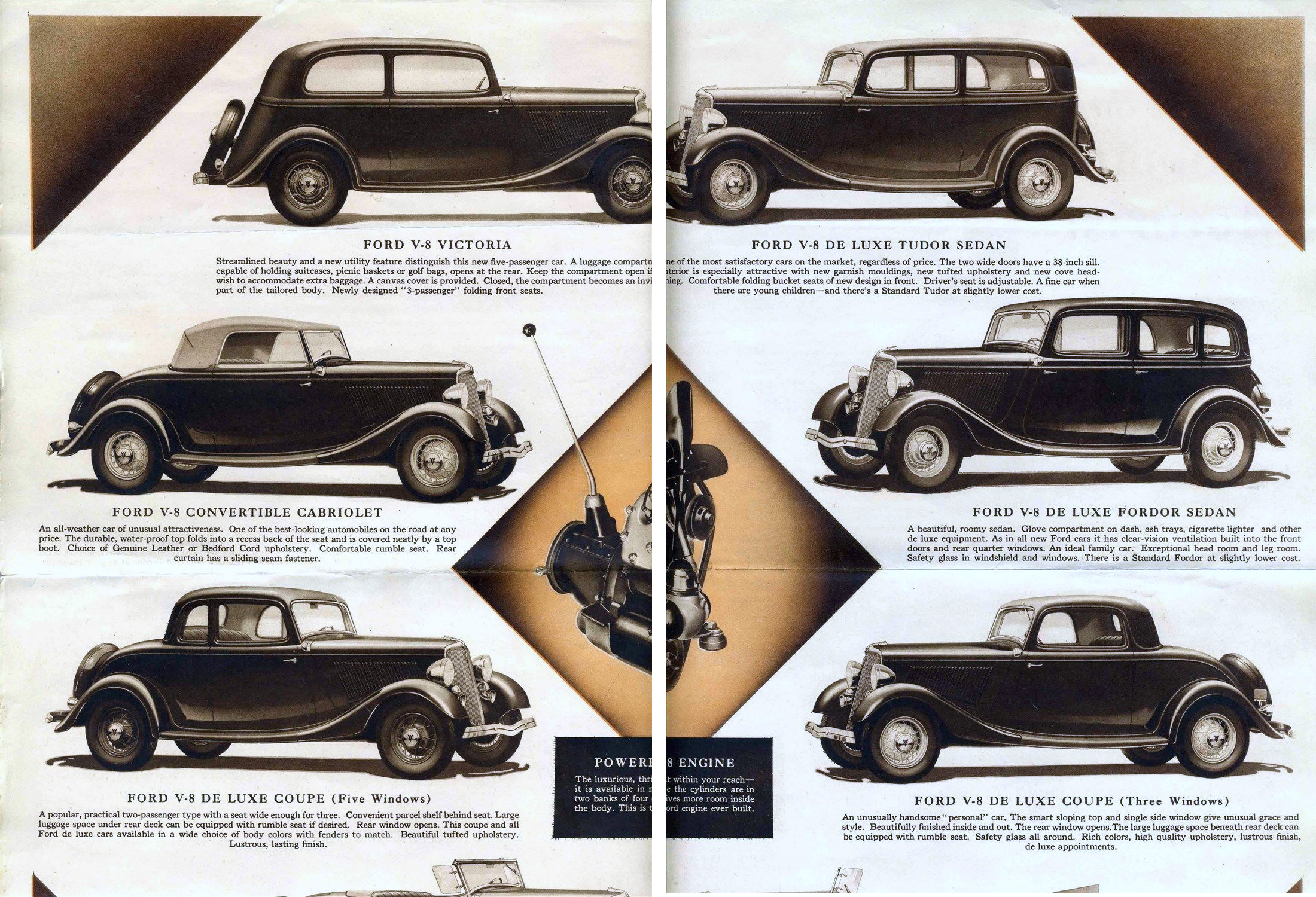 The Ford Motors exhibit, according to the records, has been visited by about 80 per cent of the total attendance of the Fair thus far. Extra guards have been put on duty to care for the large crowds. The various exhibits in the building are proving of about equal interest to visitors, according to officials, with the early models of automobiles holding a slight edge. Several nights it has been necessary to turn out the lights for five minute intervals at closing time to clear the building. Guards are busy most of the time telling people that they cannot get into the automobiles exhibited. The pay roll of the Ford exhibit totals 756 employes at present. 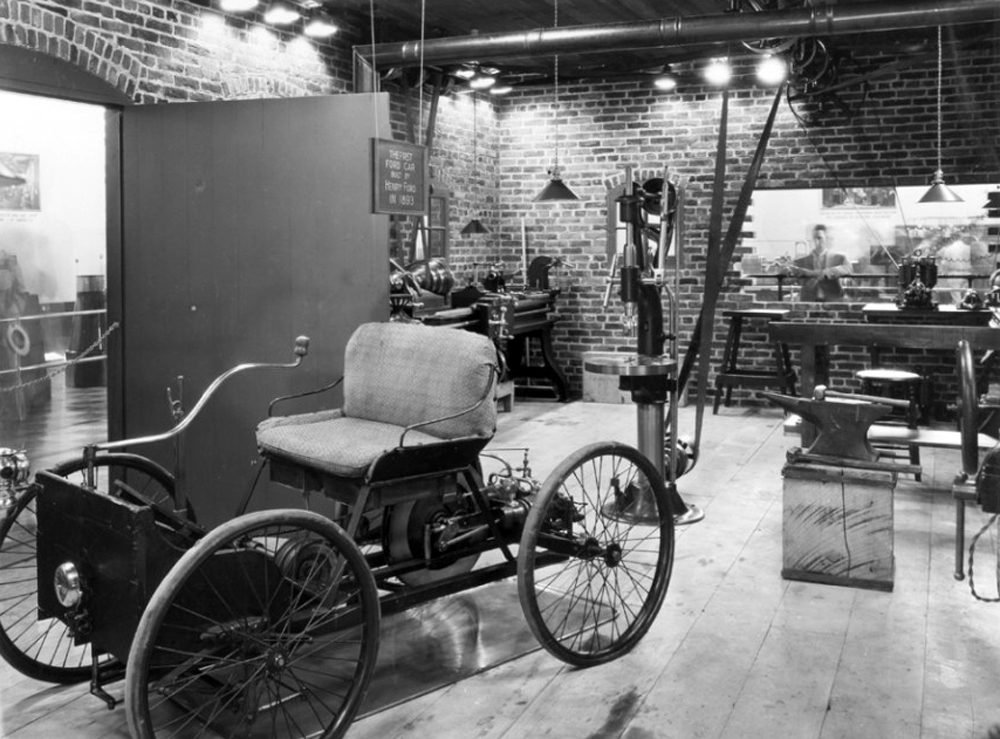 Dearborn, Mich., Nov. 22.—The rotunda of the Ford building at Chicago’s Century of Progress Exposition is to be torn down there and rebuilt as the visitors’ entrance to the River Rouge plant of the Ford Motor company.

That answers the question asked all over the country:

What will be done with the Ford exposition building?

The 12,000,000 admissions to Ford building in Chicago showed the company that the public is interested in seeing automobile parts made.

The site chosen for Ford building rotunda as the new reception hall, is a triangular plot of rolling ground covering 13½ acres directly opposite the Ford administration building here. From that land, the great “gear” shaped building will loom 110 feet—ten stories.

Everything possible of the World’s Fair structure will be preserved, including the 12 tons of chrome plated copper used; the “Ford World,” a revolving globe of the earth, 20 feet in diameter, on which Ford properties are spotted; the “V-8” fence surrounding the globe—even the unusual stones flagging in the court. 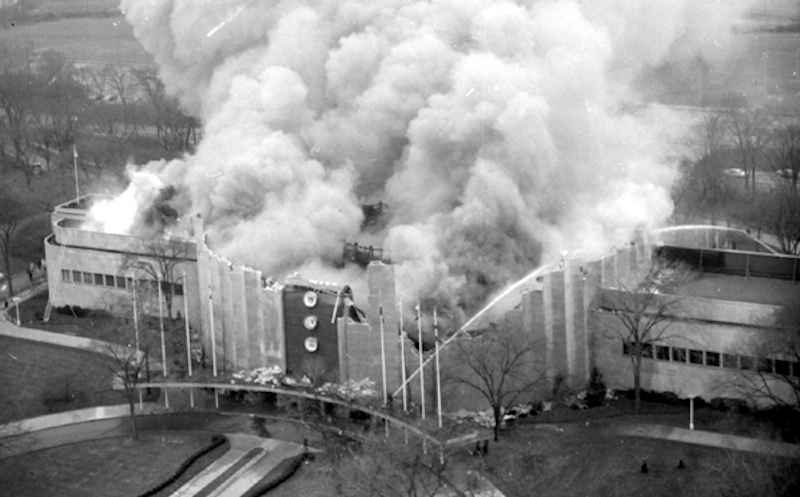 On November 9, 1962 a kettle of hot tar used for winter sealing was left unattended and the Rotunda’s roof caught fire. Thankfully, everyone got out safely and only one worker was slightly injured. Ford did not rebuild.