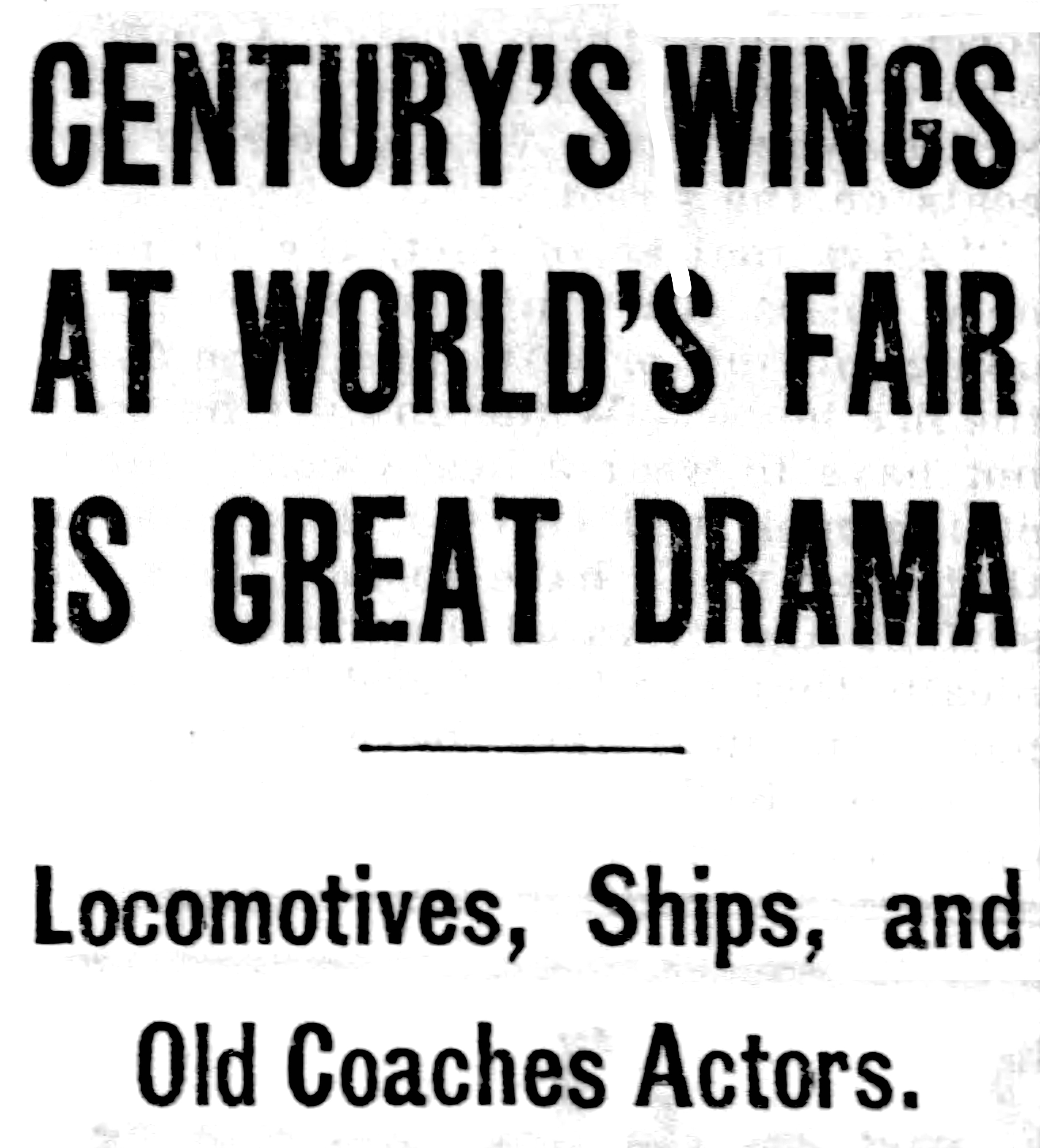 “Wings of a Century” at the World’s Fair is great drama.

That much I know or believe I do—because, for 15 years and for better or worse, I did naught else for a livelihood, but see, study, and write about plays, and I brought at least love of a beautiful art to an often trying task.

The essential greatness of “Wings of a Century” is inherent in its noble amplitude, its rich color, its touching contrasts, and its climaxes of glowing spectacle.

Here Is precisely what dramatic critics have been clamoring for—a native theme presented on a heroic scale.

Locomotives as Actors.
Colossal railway locomotives steaming onto the stage with the resounding pomp of old time tragedians are among the actors. Suave clipper ships, once the pride of our merchant marine and manned with uniformed and crews, and broad beamed canal boats carrying whole families Slide across this stage.

For an hour at once exhilarating and instructive the scene fills and flls with stage coaches, with . with veritable railway trains, with automobiles that are antiques and with automobiles that are the latest word in modernistic lines, with long limbed, loose living ballet dancers of the mining camps of ’49, with sailors, with soldiers, with police, with trainmen, and with people of politics and of fashion who were the notables of the Columbian Fair of forty summers ago. 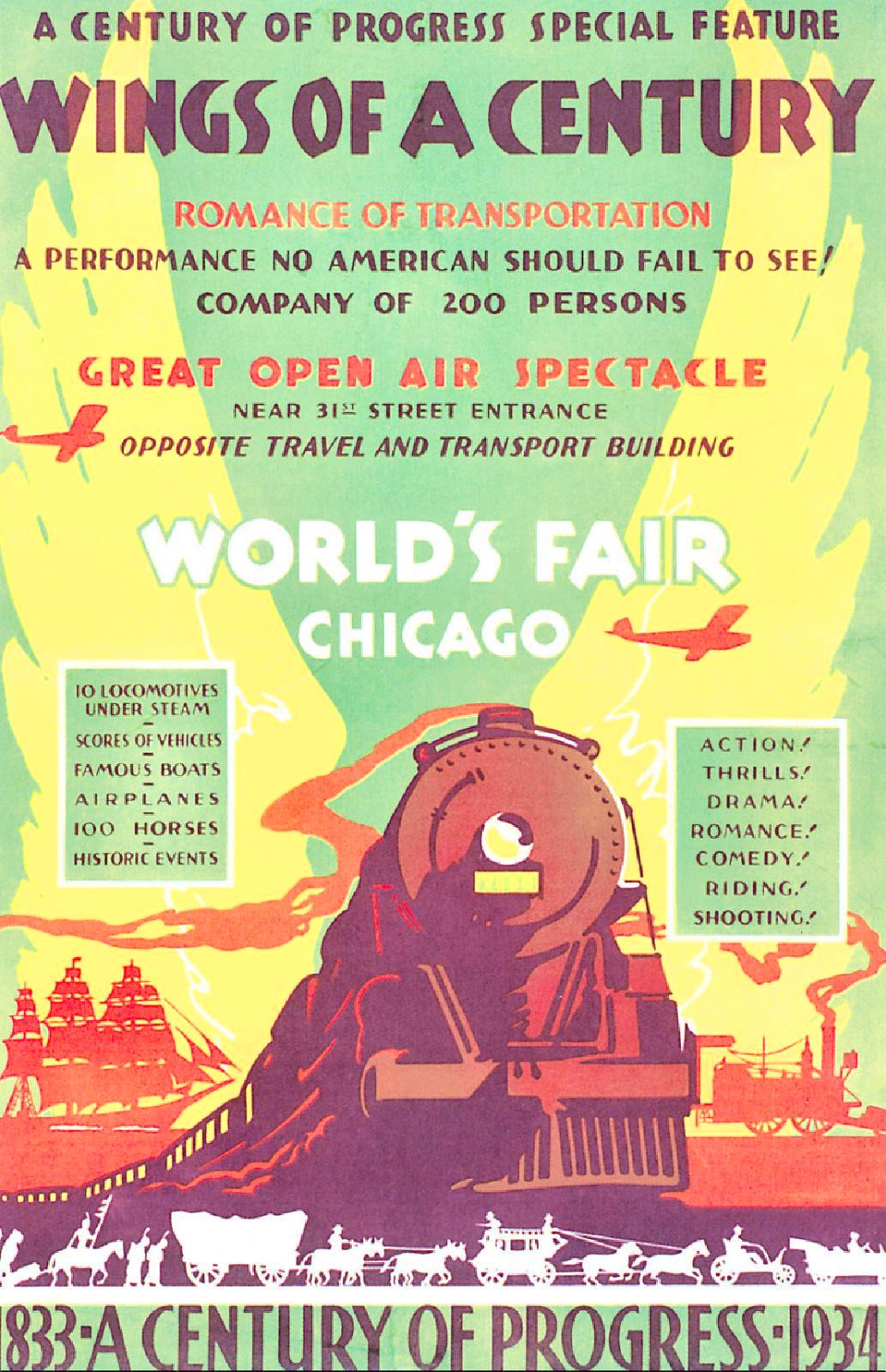 The Old Days, the Old Songs.
The drama constantly unfolds to music that now is weighted with and circumstance and that now up the dear echoes of songs rend ballads which touched with artless fancy some chord in hearts which long ago—long, long ago-responded happily to them.

The drama’s central climax is magnificent.

For now you behold bow the republic from ocean to ocean was bound together with steel and so was saved froim degeneration Into a loose group of bickering principalities.

The scene is Promontory Point in Utah and the period 1869. You see the driving with a silver hammer or a golden spike holding the rail that is the closing Unk in the lines of steel which for years have been approaching Promontory! Point from Omaha on the east and Sacramento on the west. Plains and mountains have been spanned.

The Blessing of the Rails.

A clergyman lifts his hands to bless the work. Sweating the layers and and engineers uncover their heads and the orchestra bursts into triumphant jubilee.

The locomotives from the east and the west release joyful hoots of mutual greeting. The iron street of a continent is finished.

The 3,000 men, women and children in the mounting tiers of seats in the oppen air theater are looking on with wet eyes. They have seen the noble enactment of an epochal and an epic day, and they know it.

The beautiful pageantry and poetry sweep on through the decades down to the historic day on the North Caro- lina sand dunes at Kitty Hawk where IWilbur and Orville Wright just 30 years ago conquered new lanes of transport for mankind-the cloudy lance of the firmament.

Imperial No. 3021.
Again the stage, which is thrice as wide as the huge stage of the Auditorium, fills, and fills, and fills with locomotives coming on under their own power, among them the Chicago and Northwestern railway s tit!nic No. 3024.

The crowded and resplendent finale, as justly it should, on the of the national anthem-just!y. I say, for the ” Wings of a Century ” Is a national drama.

The 150 people on the stage ayre singing, the 60 horses there and in the wings of the theater are neighing, the gleaming locomotives are sounding their deep diapason, the trumpeters in the orchestra are flinging afar their victorious music. And the waves of our inland sea, into which you could step in a few Paces, are contributing their solemn beat to the old war hymn.

Audience Makes Cmnplete Surrender.
The audience surrenders like a child to the heroic spell of so much color find harmony and grandeur. The peo-pie rise as one in their seats and join in the anthem.

Never have I heard a multitude sing it with a better will. They have seen something to sing about-something to make them both proud and humble. They have seen what their fathers wrought on land and sea and In the air, and what their own genera- tion is capable of achieving and has achieved. And so with full hearts they sing with the actors. It Is no longer a stage play. It is a rite.

This drama begins with the appearance on the scene of the pathetic Indian travole-most primitive form of transport except human legs-which a pony drags across the stage. Instantly the witchery of music lays its spell upon you, for you hear. faint and afar. the forlorn and chants of a people that now has net its face everlastingly toward the setting sun. 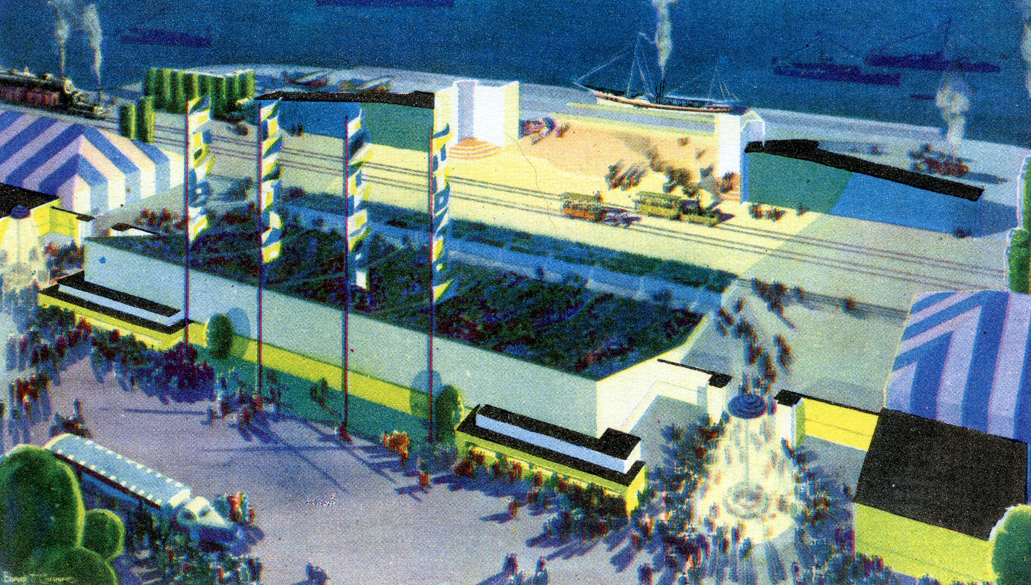 Wings of a Century Aerial View

Thle swift Moving Pageantry.
Then swift succession, of pioneer steamboats and locomotives of tragic trains of overland hooded wagons facing death at every turn of the long way, of swaying stage coaches, of the ponies of the overland express which come fairly skidding onto the stage and are superbly ridden by western horsemen; of historic figures from old white wigged Carroll of Carrollton to the white bearded Carter Harrison the Elder. our World’s Fair mayor in ’93. and so on down the decades of invention and of victory.

Mounted bandits encircle the stage coaches which carry treasure and they ‘are driven off by the fire of United States regulars.

The century of progress moves on and in the course of that progress eleven locomotives, representing all American types from the earliest to the latest and drawing coaches with passengers, steam onto the stage under their own power and over a quarter of a mile of double tracks.,

There is no fakery. No papler maché stuff. Many of the mechanisms are authenticated originals. The ancient canoes are from the Rosenwald Museum of Science and Industry. The dress, which the infants Eulalie of the now deposed royal house of Spain wears in one of the gala scenes. Is actually from her wardrobe. In the battle with the bandits, the Wells Fargo money coach is the actual one that 64 years ago was making the trip from Council Bluffs to Sacramento in 60 days.

The Incomparable Setting.
The setting for the drama is incomparable. Its background-or backwater-is Lake Michigan, where ships are passing and where the lighthouses are keeping their flashing watch. Be- hind the audience rises the emerald bulk of the Exposition’s Travel and Transport building.

Majestic pyramidal white pylons sentinel each side of the stage. Some- times while the drama is in progress airplanes en route to the east snarl far aloft. The theater s root is shim- mering patti-colored light of unearthly beauty.

Such a drama aid such a setting need no words, but a “chorus”-using the term and the function in the sense In which Shakespeare used them in the prologues to “Henry V.” and “Romeo and Juliet” -intones words during the progress of tile play. They are eloquent and not too copious.

“Stout and brave” chants “chorus” at one point, and that is the play’s whole story and spirit.

The show —ignoble word for so much beauty and poetry-was five months in building and a month in rehearsal. Not counting the cost of locomotives and other heavy mecha- nisms contributed by the great Amer. ican railroad companies, its cost be- fore a performance was given ran into six figures.

Where a Woman Triumphed.

Edward Hungerford of the New York Central lines did much of the writIng of the libretto and a slender young woman with big eyes and a vibrant voice-Miss Helen Tieken-did all the research and producing. The result of her direction brings her forward as one of the gerat American stage managers.

The spectacle “America,” performed at the Auditorium during the Columbian summer, was not so grand and meaningful as this ‘Wings of a Century” is, and parents do not take their children to see it ought to be spanked with the paddles of the old water wheel that turns in tihe shadow of the Fair’s Horticultural building. On Friday afternoons the incredible admission fee for children is five cents.

And finally-though not to try to ride into publicity on the wings or somebody else’s glory- we will say that to view this drama is to have a grand introduction to The Chicago Tribune’s American air races and air combats, which will be unleashed for four days beginning Saturday.

Our Show will be a tremendous sixth act, as it were, to the Tleken-Hungerford triumph