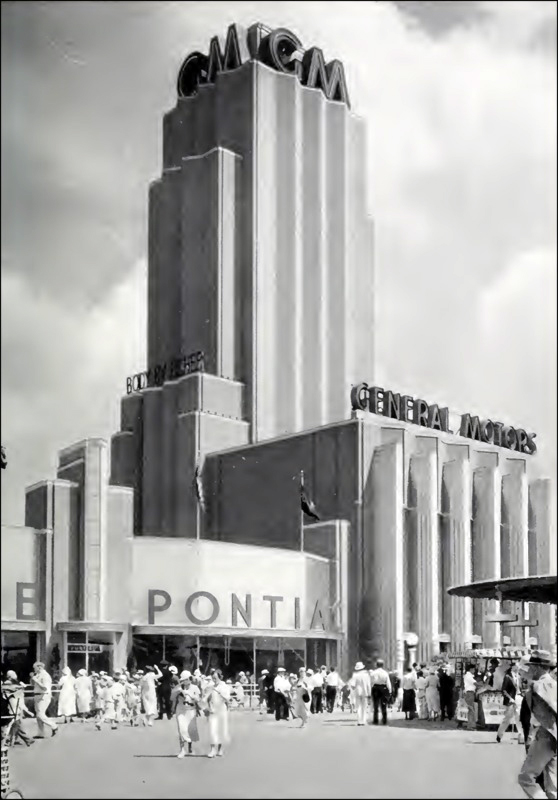 The part that automotive engineering has played in our civilization is graphically represented in the General Motors building. It stands on rising ground at the foot of Thirty-first street in the midst of a lovely, formal garden surrounded by willows and with Lake Michigan as its background. The building is an eighth of a mile long and 306 feet wide, surmounted by a 177-foot tower, brilliantly colored, and illuminated. It was designed by Albert Kahn. The entrance hall divides two main display rooms, each containing 18,000 square feet. Here the cars of General Motors are on exhibition. In one of the rooms the General Motors Research laboratories present a display of their own. 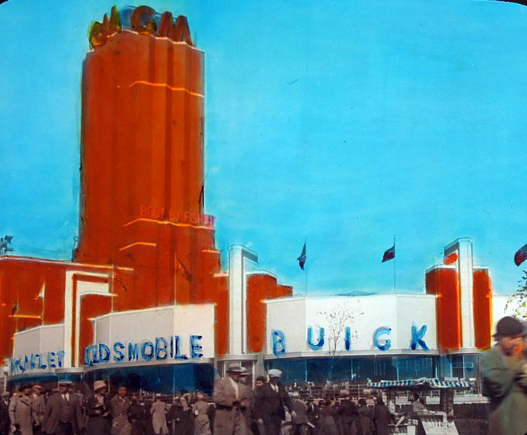 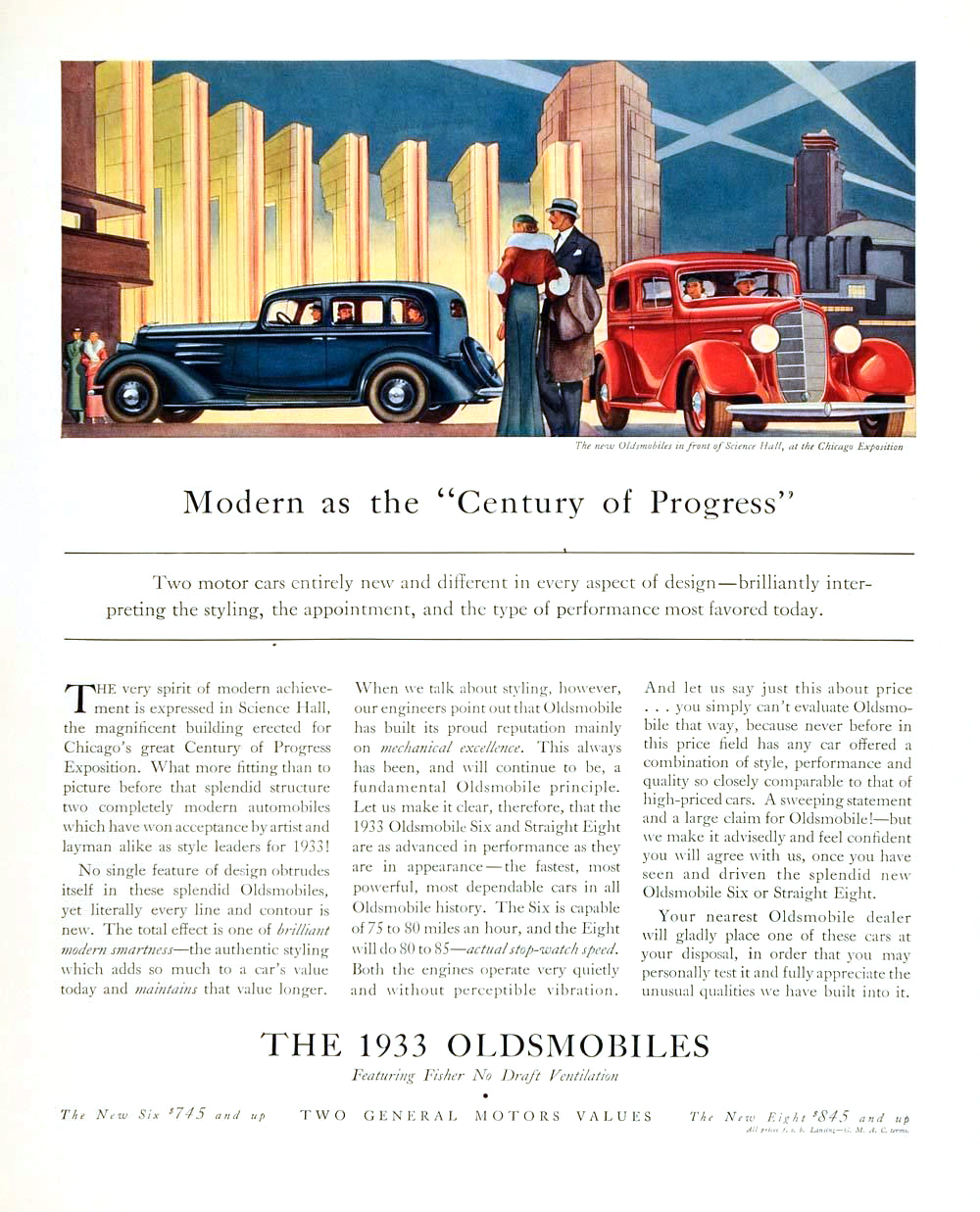 1933 color print ad for General Motors’ Oldsmobile Six and Eight automobile models with bodies and No Draft Ventilation by Fisher. The vehicles are featured in illustration in front of Science Hall at the Chicago Exposition. 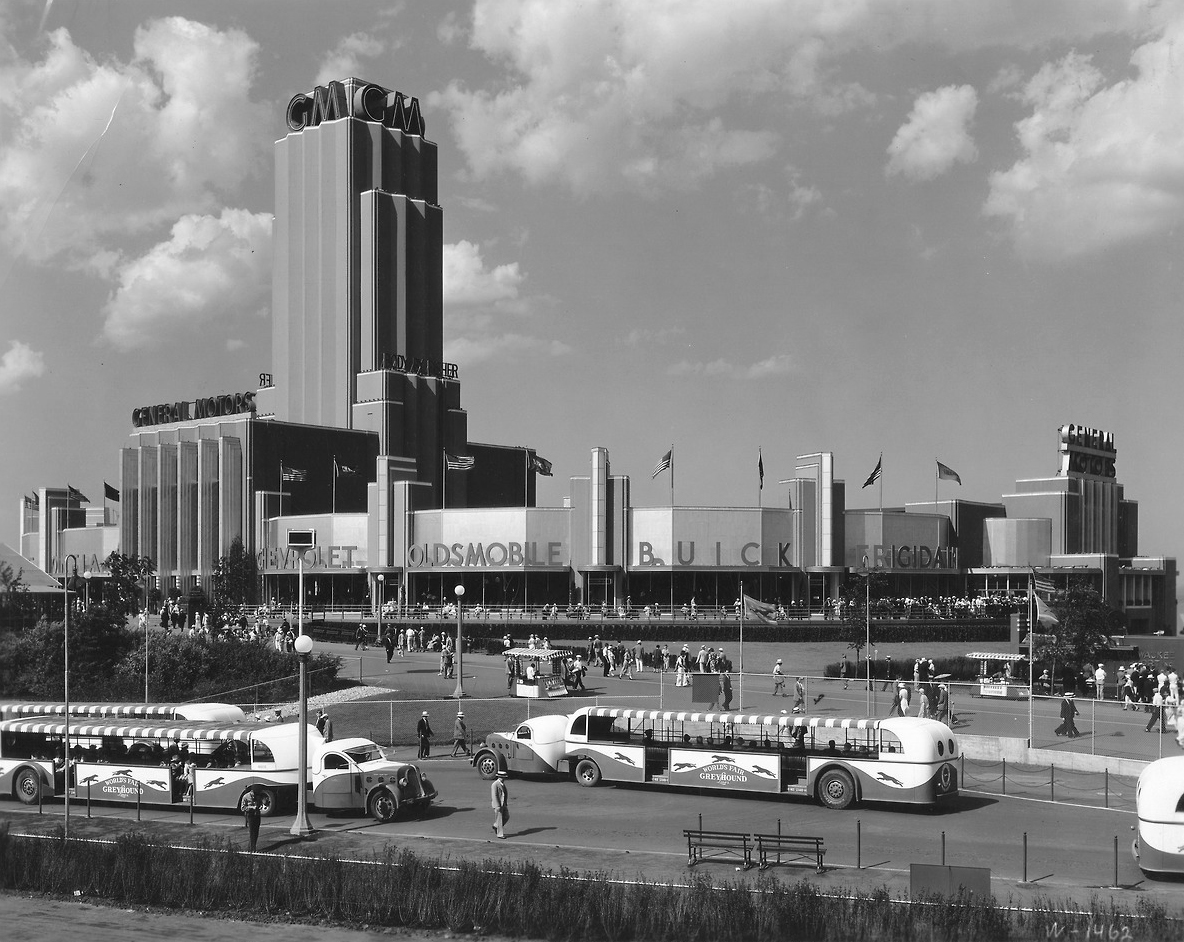 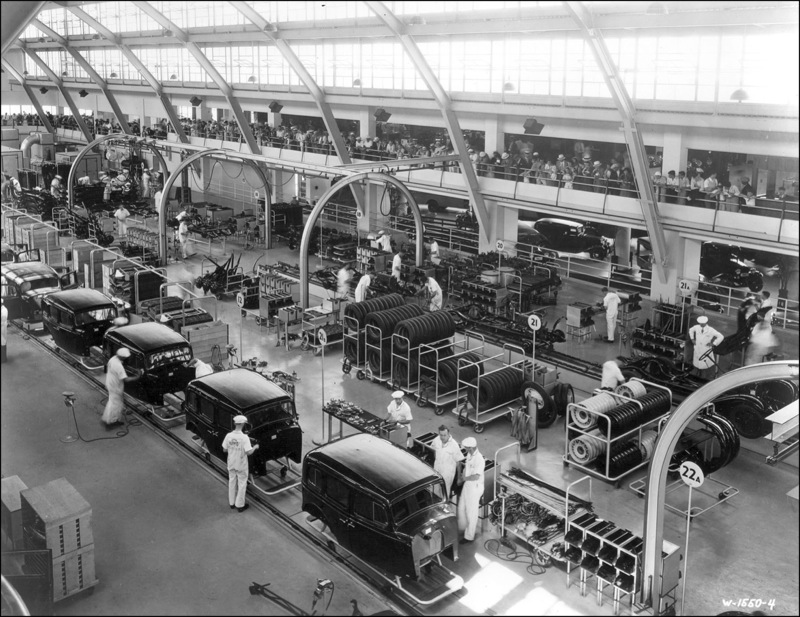 From a balcony a fifth of a mile long, 1,000 visitors at a time may watch the entire process, from the first step of the assemblage of a Chevrolet car until the finished car is driven off at the end under its own power. Constant production of cars is maintained in this exhibit throughout the Exposition, and the cars thus made are part of the regular output of General Motors.

Two hundred white-uniformed, expert workmen are at their separate jobs along the line. You look down on them and see the steel frames of the chassis starting on their journey. Cranes swing the wooden body framework over them and the swift workmen at that point, with their electrically powered screwdrivers and wrenches, fasten the framework together. The steel bodies are swung into place, welded and bolted, the joints polished mirror-smooth, and the job, beginning to look like a car, moves on, followed by the endless line of others. You see how the inside of the body is finished along with the wiring, the adding of the transmission and other mechanisms, the swinging of the engines into place, the car constantly growing, every one of the expert mechanics adding his touch, until the final inspection and testing of the engine. The car is run into the line of finished jobs to be driven away at the end of the working day.

It is astonishing how quietly the operations are conducted. Everything fits in its place. The cranes silently swing the heavy parts to exactly the right position and the whole job goes on with little noise. 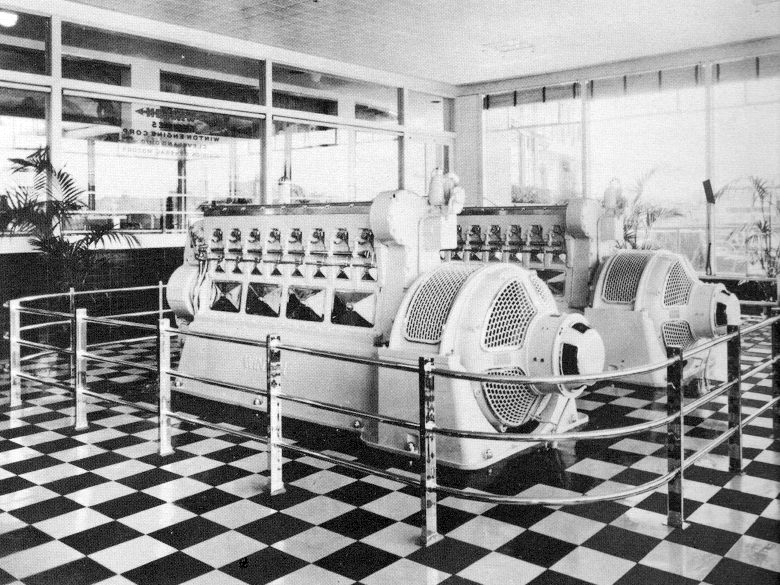 At Chicago’s Century of Progress World’s Fair in 1933, GM evaluated two 201A diesel-electric engines, using them to generate power for its “Making of a Motor Car” exhibit. The working demonstration of a Chevrolet assembly line fascinated thousands of visitors who watched from overhead galleries.

One visitor happened to be Ralph Budd, president of the Chicago, Burlington & Quincy Railroad (known as the Burlington Line). Budd immediately recognized the locomotive potential of these extraordinary new diesel-electric power plants. He saw them as a perfect match for the lightweight “shot-welded” stainless steel rail cars being pioneered by the Edward G. Budd (no relation) Manufacturing Company in Philadelphia, known as the Pioneer Zephyr. 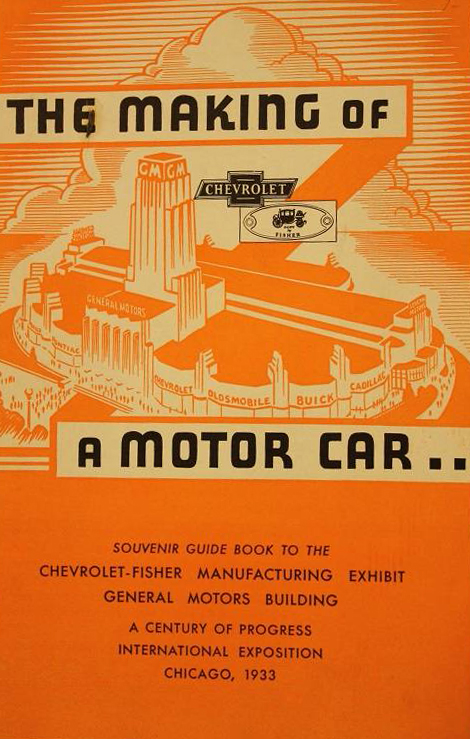 The Making of a Motor Car Brochure
1933 Century of Progress