CLEVELAND — In what will be one historic World Series no matter the outcome, Jake Arrieta flirted with a different kind of history, carrying a no-hitter into the sixth inning on a brisk Wednesday night at Progressive Field.

Arrieta went 5 1/3 innings before allowing a hit, and combined with Mike Montgomery and Aroldis Chapman on a four-hitter to spark the Cubs to their first win in the World Series since Oct. 8, 1945, a 5-1 victory over the Indians that evened the best-of-seven Fall Classic at one win apiece. Game 3 is set for Friday night, when Wrigley Field hosts its first World Series game in 71 years.

“Wrigley, it’s going to be — you know, it’s always good. It’s always crazy good, but I’d have to imagine a little bit more than that, especially coming back at 1-1,” Cubs manager Joe Maddon said. “I think the folks will be jacked up about the win tonight. But it is, it’s the finest venue there is in professional sports and maybe in all of sports. … But now having a World Series to root for, it’s going to be incredibly special.”

Being tied in the Series isn’t new territory for Maddon. In 2002, he was a coach on the Angels, who lost the first game of each of their three postseason series, yet rallied each time to win the World Series. Of the 57 times the Fall Classic has been tied 1-1, the winner of Game 2 has gone on to win the World Series 29 times (50.9 percent). In the past 10 instances since 1993, it’s happened twice — those Angels and the ’09 Yankees.

“It kind of felt like a must-win for us,” Chicago’s Kris Bryant said. “You don’t want to go home down two games. We know we play pretty good at home. Our fans are going to be pretty excited for the first World Series game there in what, 71 years? So I’m sure it’ll be a nice atmosphere.” 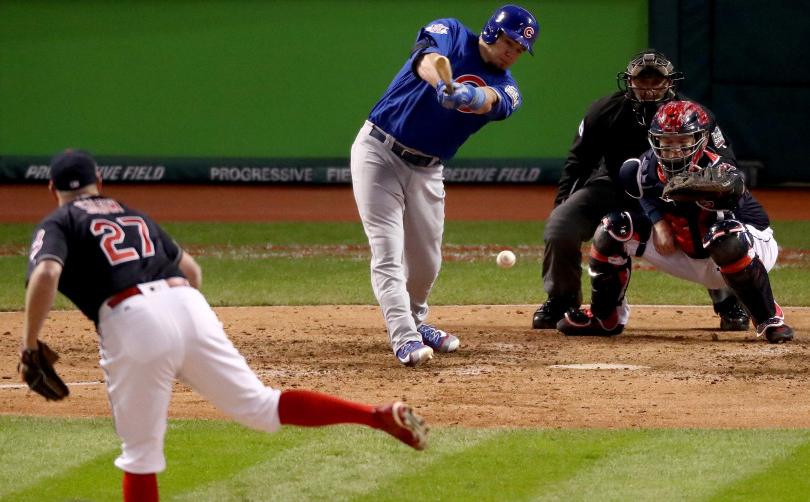 Arrieta’s 5 1/3 hitless innings were the most to begin a World Series game since the Mets’ Jerry Koosman went six innings in Game 2 in 1969. The Cubs right-hander was two outs shy of matching the team’s longest no-hit bid in the World Series, done in 1906 by Ed Reulbach, who threw six no-hit innings in Game 2 against the White Sox.

“He had so much movement on his ball, and he was kind of effectively wild,” Indians slugger Mike Napoli said of Arrieta. “He hit the corners when he needed to, and then you can’t really sit in an area because he was moving the ball all over the place. He did a good job. He shut us down for five innings without even getting a hit.”

Arrieta found himself in the same mess as Game 1 starter Jon Lester. Both got two outs to start the game, but then walked Francisco Lindor and Napoli back to back. Lester gave up two runs on Tuesday night en route to a 6-0 loss, but Arrieta escaped when he got Jose Ramirez to fly out.

“I kind of had my foot on the gas a little too much at the start, trying to do more than I needed to,” Arrieta said. “Then I really got back to just executing good pitches towards the bottom of the strike zone.”

Arrieta was cruising through five innings, but he lost his no-hit bid and the shutout in the span of three batters in the sixth. Jason Kipnis doubled with one out, moved up on a grounder and then scored on a wild pitch. Napoli singled on Arrieta’s 98th pitch, and Maddon went to Montgomery.

The reigning NBA champion Cleveland Cavaliers were in attendance, including LeBron James, but they couldn’t help the Indians. Cleveland starter Trevor Bauer, making his first postseason start since the bloody finger episode in Game 3 of the American League Championship Series, was knocked out after 3 2/3 innings. The Cubs made the right-hander work, and he needed 87 pitches in the abbreviated outing.

“They never let him settle into the game,” Tribe manager Terry Francona said. “You’ve got to give them a lot of credit. … As a staff in general, we worked behind a lot tonight, a lot more than is helpful. I think some of their hitters deserve credit for that also.” 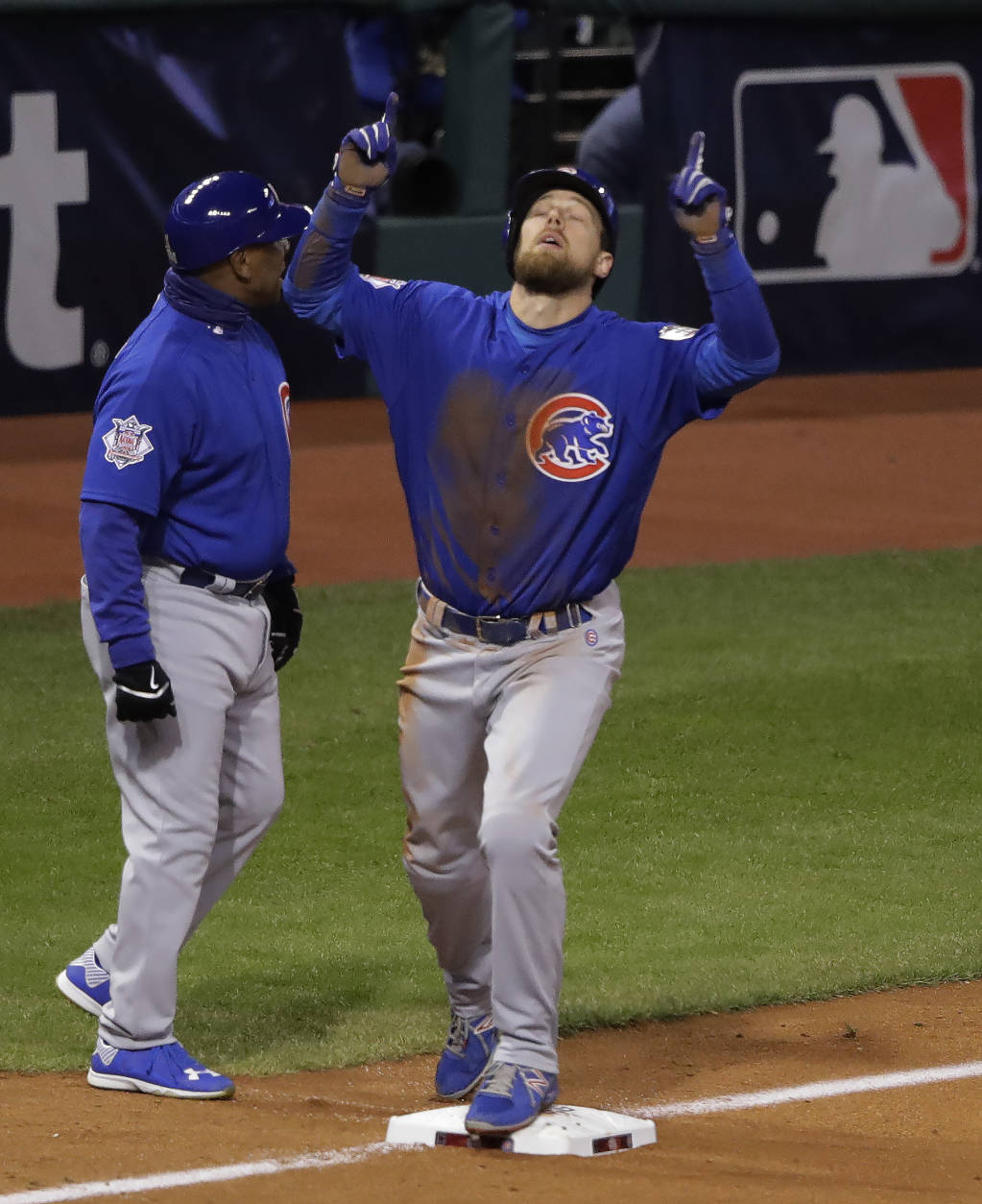 Kyle Schwarber continued his dream postseason, collecting two hits and driving in two runs for the Cubs, while Anthony Rizzo provided a spark with an RBI double in the first. Rizzo drew a walk with two outs in the third and scored on Schwarber’s single, and then he battled Zach McAllister in a 10-pitch at-bat in the fifth, fouling off five straight pitches before drawing a walk and scoring on Ben Zobrist’s triple (right).

“They’re going to make a movie about him,” Bryant said of Schwarber.

Kyle Schwarber talks about coming up big for the team in Game 2 of the World Series against the Indians
Maddon is counting on the kids, and they came through. The Cubs became the first team to win a World Series game with six players under 25 in the starting lineup.

“I don’t really think about these guys as that young,” Maddon said. “Addison [Russell] really swung the bat well again tonight. Up and down, I don’t focus on that. I mean, before the game I heard [of the record], and of course I realized that. But game in progress, you’re so able to speak with them, and if you need to make any adjustments, they can hear you. They can slow it down to the point where they can hear you.”

First things first: With one out in the first, Bryant singled and Rizzo battled Bauer in a seven pitch at-bat, eventually lining a double down the right-field line. Bryant tallied and became the first Cubs player to score a run in the World Series since Peanuts Lowrey in Game 7 in 1945. Zobrist then worked a 10-pitch at-bat against Bauer, before flying out to left. The Indians’ starter was able to strike out Schwarber to end the inning, but he needed 29 pitches to get through the first. This Series will have plenty of “firsts” for the North Siders, by the way, as Rizzo is the first Cubs player to drive in a run in the World Series since Bill Nicholson doubled in Lowrey in that Game 7.

“That’s our goal,” Maddon said about scoring first. “That’s our mantra on a nightly basis. If you look at this playoff run for everybody, the team that scores first normally has a pretty good advantage. We want to do it all the time.”

He’s back: The Cubs had two outs and two on when Schwarber came to bat in the third against Bauer, who fell behind, 3-0. The Cubs’ slugger smacked a single to center to score Rizzo, and added an RBI single in the fifth. His comeback is storybook. He was hitless in four at-bats before he was lost for the regular season with a left knee injury on April 7, but he is 3-for-7 in the World Series.

“He jacks everybody up,” Maddon said of Schwarber’s return to the lineup. “Those couple big hits he got, again, really Rizzo really responded to it well. The whole group did. It makes your lineup longer. It makes it thicker. It makes it better. Zobrist is seeing better pitches right now because of that, too, I believe.”
Said Schwarber: “I want to help this team get to the ultimate goal. I want to have a good at-bat every time I go to the plate.”

Action in right: Indians right fielder Lonnie Chisenhall was involved in two plays that led to Cubs runs. In the first inning, when Chisenhall collected Rizzo’s double into the corner, he spun and fired the ball to second base. Bryant scored all the way from first, but Statcast™ indicated he likely would have scored no matter where Chisenhall threw the ball. Then with one out in the fifth, Chisenhall slipped and fell while chasing down a hit by Zobrist. That mishap allowed Zobrist to leg out a triple, scoring Rizzo and giving Chicago a 3-0 advantage.

Kipnis’ costly error: With two outs and Schwarber on second in the fifth, Willson Contreras sent a sharp routine grounder to second base. The ball ate up Kipnis, who bobbled it and no longer had a play at first. Contreras reached on the error and clapped his hands repeatedly in celebration. Reliever Bryan Shaw then issued consecutive walks — the later coming with the bases loaded against Russell. Kipnis’ miscue forced Shaw to throw 13 additional pitches and helped the Cubs to a three-run inning that put the Tribe in a 5-0 hole. Kipnis made a second error in the seventh on a missed catch, following a highlight-reel diving stop by Lindor up the middle.

“It was a bad game, for me at least,” Kipnis said. “I’ve had them before. I’ll have a short memory on it. It’s not the end of the world. That one cost us a run. The other one didn’t. All I can do is have a short memory and move on. It’s cold out there. You’ve got to keep the blood moving, and the plays need to be made.”

Kipnis ends no-hit bid: Arrieta cruised into the sixth, holding Cleveland to an 0-for-16 showing on the night by the time Kipnis stepped in with one out in the inning. Chicago’s starter fired a 1-1 slider, which Kipnis ripped up the middle with an exit velocity of 103 mph, per Statcast™. As the ball bounced into the right-center gap, Kipnis turned the hit into a hustle double, even with a banged-up left ankle. He then moved to third on a groundout by Lindor and scored on a wild pitch. In a span of nine pitches, Arrieta lost his no-hitter and shutout.

“I don’t want anybody no-hitting me in my own backyard,” Kipnis said. “It doesn’t matter if it’s the World Series or the regular season. [Arrieta] was sharp tonight. He painted and moved the ball around and pitched a good game.” 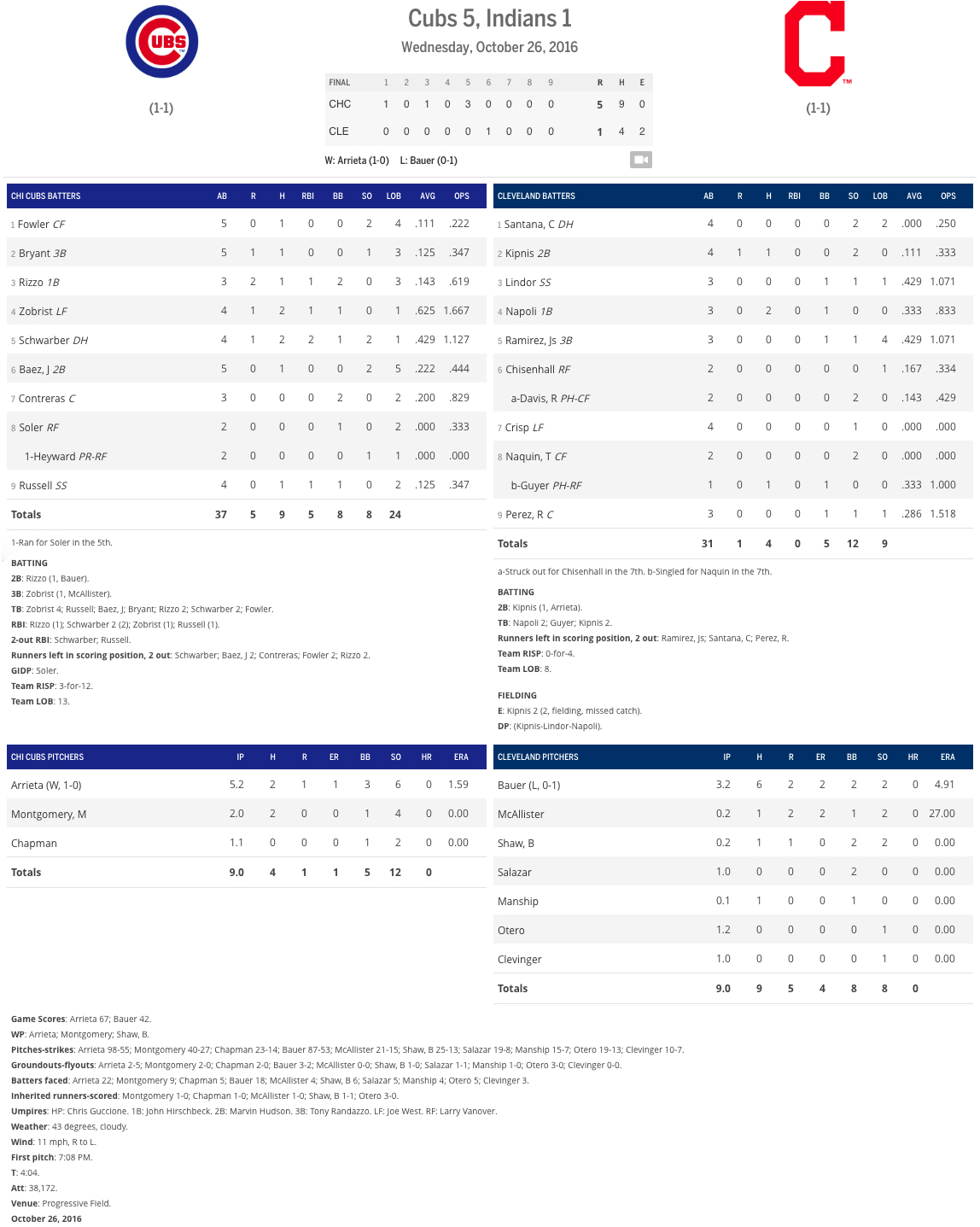 “No, it’s not that easy, first off. Baseball’s a crazy game. It will do crazy things to you, but this is the moment that we all look for when we were little kids, to play in the World Series and win it. We just took a small step today, but we’ve still got a long way to go.” — Schwarber, on his quick comeback

• Game 2 of the World Series was the first game this postseason, out of 30, that did not include a home run.
• Walking dread: Tribe gives Cubs easy access
• With the loss, Francona dropped to 9-1 in the World Series as a manager. He was the only manager in Major League history to win each of his first nine games in the Fall Classic. The nine-game winning streak is the third longest in history for a manager, trailing only Joe Torre (14) and Joe McCarthy (10).
• With six K’s in Game 2, Arrieta passed Kerry Wood (38) for sole possession of first on the Cubs’ all-time postseason strikeouts list with 44.
• Indians pitchers struck out eight Cubs in Game 2, marking the 11th consecutive postseason game with at least eight punchouts, dating back to the 2013 AL Wild Card Game. That streak is tied with the Dodgers (2014-16) for the longest such run in postseason history.
• Salazar shakes off rust in relief appearance
• Cubs pitchers combined to fan 12, setting a franchise record for the most in a World Series game. The previous high was 10, done in Game 5 in 1908 and Game 3 in 1932.
• Chapman became the first Cuban-born pitcher to pitch in a World Series game since Orlando Hernandez did so for the White Sox in Game 3 of the 2005 Fall Classic.