CHICAGO — For two days, generations of Cubs fans have held their breath. If they couldn’t see the team win its first championship since 1908 in Chicago, could the Cubs win at least one World Series game at Wrigley Field? Kris Bryant, Jon Lester and Aroldis Chapman obliged, and gave them reason to party on Sunday night.

The Cubs extended the World Series beyond Halloween thanks to Chapman’s trick — scary heat and a career-best eight-out save — Bryant’s home run, which ignited a three-run fourth, and Lester’s veteran moxy in a 3-2 victory over the Indians in Game 5. Cleveland’s lead in the best-of-seven Series was trimmed to three games to two, and Game 6 will be Tuesday night at Progressive Field, which will get live baseball after hosting watch parties all weekend.

“I feel like we play our best with our backs up against the wall,” Bryant said after the Cubs’ first win in a World Series game at Wrigley Field since 1945. “We went out there today, took care of business. Hopefully we can get out there and win Game 6, because you never know what can happen in a Game 7.”

Wrigleyville has been buzzing as the Cubs hosted their first World Series in 71 years. The Cubs got pumped up pregame as Anthony Rizzo ran around the clubhouse playing the theme from the movie “Rocky” and used it as his walk-up music for his first at-bat. Hey, whatever works.

“I wanted to get the crowd pumped and let them know we plan on going the distance,” Rizzo said. “Hopefully, we’re the last ones standing.”

Chicago has had no problems catching the ball, including a Spider-Man-esque wall-climbing grab by Jason Heyward to snare Trevor Bauer’s foul popup down the right-field line. The Cubs have just had a tough time connecting against the Indians’ pitchers, who came into the game with a 1.50 ERA in the previous four games. Bauer, who also lost Game 2 at Progressive Field, struck out seven, including five of the first 10 batters he faced, but the Cubs broke through for a three-spot in the fourth that saddled Bauer with the loss. 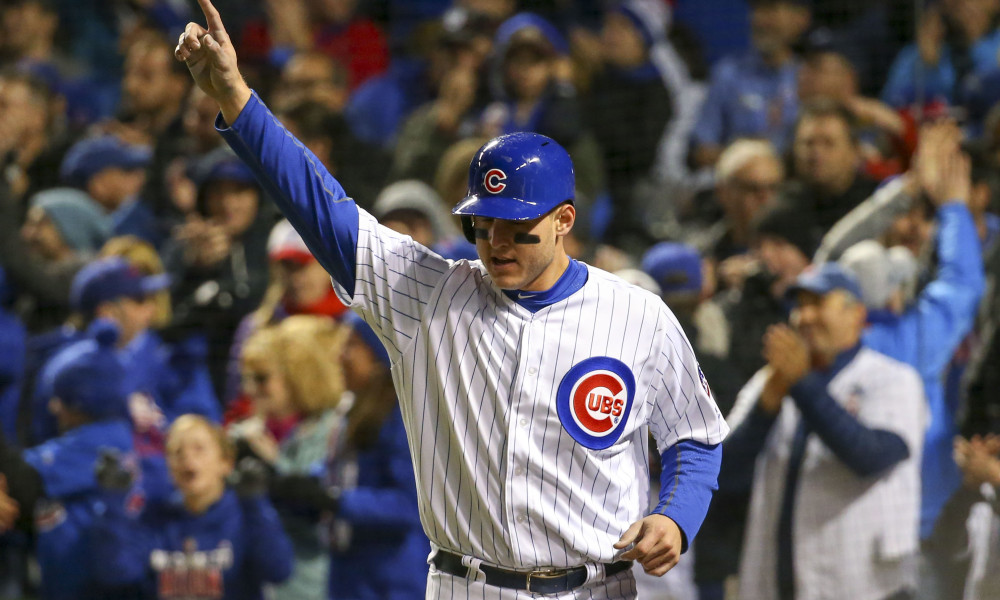 Anthony Rizzo of the Chicago Cubs

With the exception of a 3-0 pitch that Ben Zobrist hit for a single two batters after Bryant’s homer, “I located every single pitch that they hit exactly where I wanted them,” Bauer said. “Sometimes, it doesn’t work out for you. I got three of them to chase balls that were way out of the zone. Usually, those go in your favor. Clearly, not tonight.”

Jose Ramirez gave the Tribe a 1-0 lead in the second, which must have seemed like 100-0. Cleveland entered the game 8-0 in the postseason when scoring first, but Lester settled in and gave the Cubs’ bats a chance to do their thing.

Bryant tied the game with a leadoff blast in the fourth, the seventh homer allowed by Cleveland in 13 postseason games. The Cubs then rattled off four hits in five at-bats, including an RBI infield single by Addison Russell that scored Rizzo and opened a 2-1 lead. David Ross, playing his last game at Wrigley Field before retiring after the season, added a sacrifice fly.

Francisco Lindor’s RBI single in the sixth pulled the Indians within 3-2, and then the managerial wheels started turning, as both Joe Maddon and Terry Francona went to their closers early. Maddon called on Chapman with one out and one on in the seventh, and the hard-throwing lefty escaped that jam, worked around a runner reaching third in the eighth and closed the victory with a perfect ninth.

After Bryan Shaw retired the first batter in the bottom of the seventh inning, Francona inserted Cody Allen into the game. The Indians’ closer worked a scoreless 1 2/3 innings to keep the Cubs from padding their lead, but the Tribe couldn’t rally against Chapman.

“We’re trying to do anything to get on base and get something going,” Indians first baseman Mike Napoli said. “He was going to be in there to the end — that’s what it looked like. We had an opportunity.”

Maddon gave Chapman a heads-up that he might call on him early.

The loss was a rarity for Francona, who is now 11-2 in World Series games, but the Indians will resume the pursuit of their first championship since 1948 on Tuesday at Progressive Field.

“Sometimes you’ve got to respect what the other team can do, too,” Francona said. “Sometimes they beat you. I didn’t think we beat ourselves. I thought they beat us.” 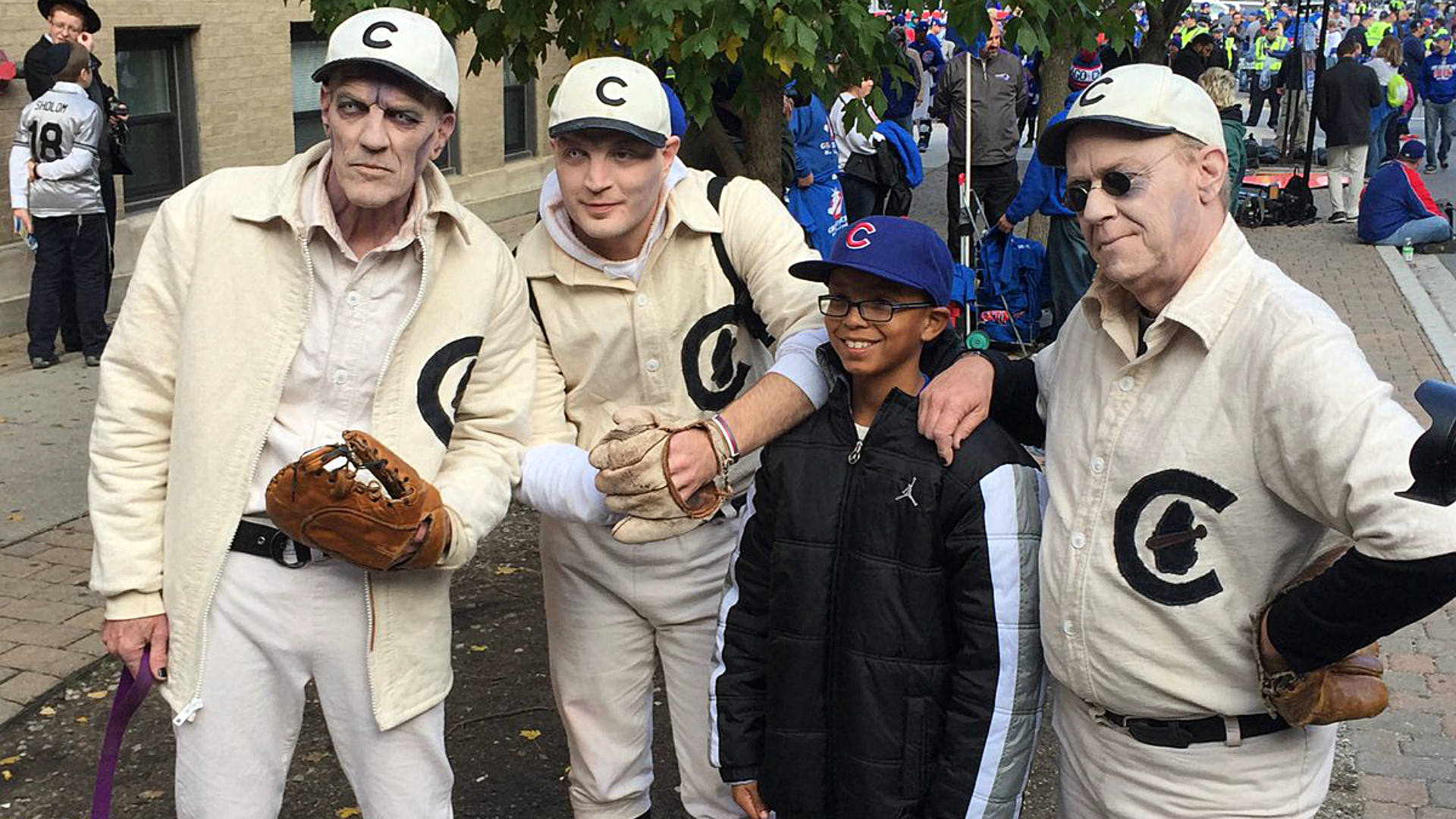 Fans outside of Wrigley Field dressed up for Halloween as 1908-era zombies. 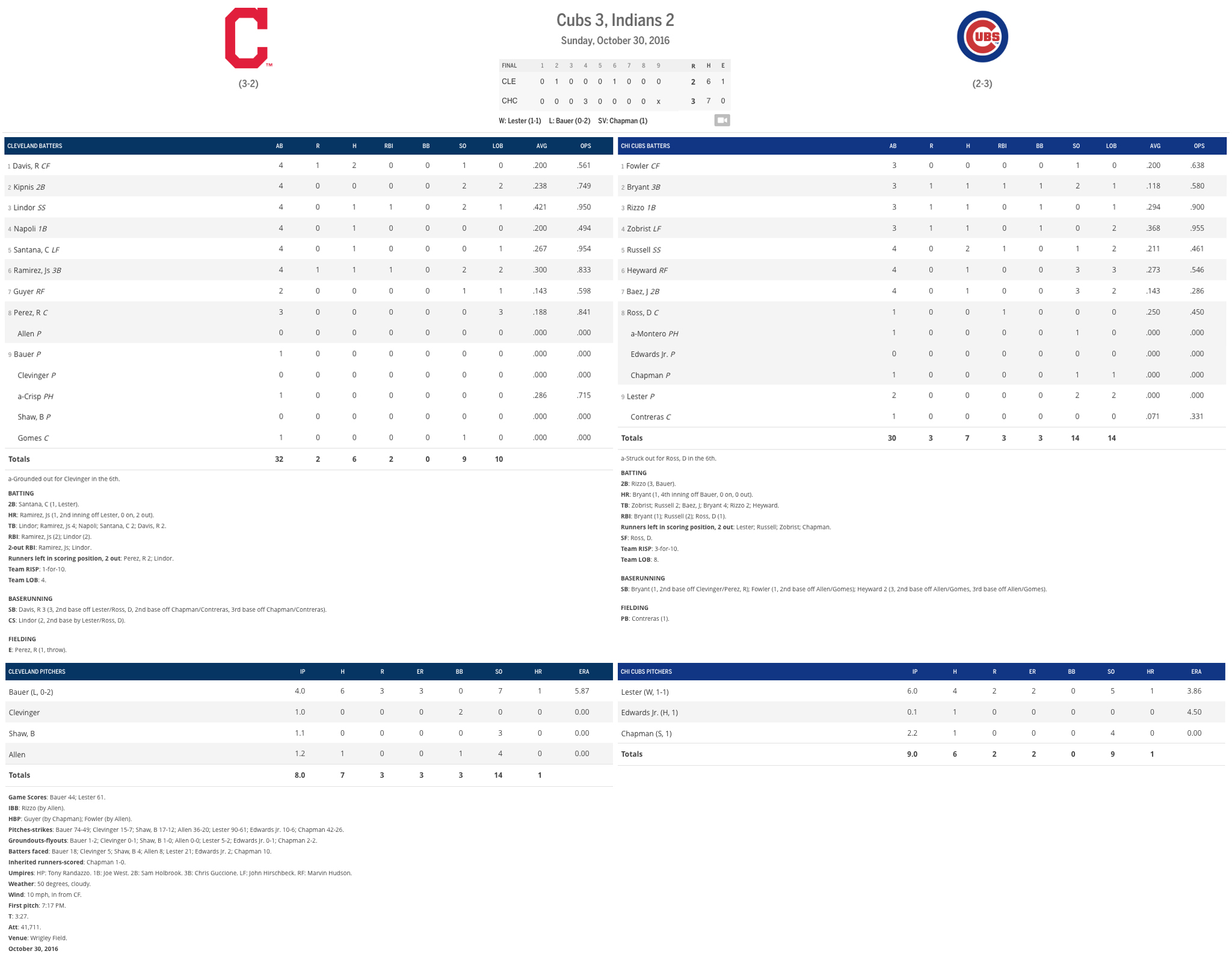 Calling on Chapman: Maddon turned to Chapman earlier than he has all postseason, handing the ball to the fireballer with one out and a runner on second in the seventh. After striking out Ramirez, Chapman hit Brandon Guyer with a 100-mph heater to put two runners aboard. With fans on their feet, nervously watching as Chicago’s one-run lead was in jeopardy, Chapman induced an inning-ending groundout off the bat of Indians catcher Roberto Perez. Chapman headed into the outing having stranded only three of seven inherited baserunners this postseason. He stranded one this time. Chapman then worked a scoreless eighth, in which Rajai Davis singled, stole two bases and was left standing at third, and a perfect ninth. The 2 2/3 innings were a career high.
“It’s World Series time,” Ross said. “Everybody has to do the best they can. This guy is one of the best closers in the game for a reason. Their guys had been pitching multiple innings, and it was nice to see Chappy kind of match them.”

Finally: Five of the Cubs’ first 10 batters struck out against Bauer, who took a 1-0 lead into the fourth. Bryant opened the inning with his second postseason home run, launching a 1-1 pitch into the left-field bleachers. Rizzo then doubled, moved up on Zobrist’s single and scored on Russell’s infield hit. One out later, Javier Baez reached on a bunt single to load the bases, and Ross followed with a sacrifice fly to left to give Chicago a 3-1 lead.

I was just trying to put the ball in play,” Ross said. “I choked up and took a two-strike approach and stayed up the middle as best I could to try to get that run in. The nerves were high. The heart rate was up. I was just trying to slow the moment down, and he gave me a ball that came back over the middle, and I was able to get it up in the air.”

Tribe tests Lester: Two of Cleveland’s top runners, Davis and Lindor, reached in the sixth and tried to toy with Lester, given his well-known issues with throwing to bases. After Davis singled, he stole second and then danced far off the bag during the next two at-bats. At one point, Davis had a secondary lead of 27 feet, per Statcast™. Lindor brought Davis home with an RBI single and then tried to steal his way into scoring position. After a secondary lead of 25 feet, Lindor sprinted for second, but he was thrown out with a quick catch-and-fire from Ross and a great tag by Baez. That ended the inning and preserved Chicago’s 3-2 lead.

“He’s pretty legit, man,” said Lindor, when asked about Baez’s tag. “Watching him do it all the times on the screen during the game, it’s pretty cool watching him, how quick he can get that to the player. He got me. It’s the second time he got to me.”

Glovework: Ross and first baseman Rizzo combined on a unique catch in the second. With one out, Carlos Santana popped up toward Cleveland’s dugout. Ross chased the ball to the dugout railing and made a play on the ball while reaching over a TV camera. He missed the catch, but he was able to tip the ball up as he grabbed the railing to avoid falling into the dugout. Rizzo juggled the carom and caught it for a 2-3 putout.

“I told Rizz it was like a tip drill in football,” Ross said. “I set him up so he could be the hero.”

Heyward’s struggling bat had him out of the starting lineup the first three games of the Series, but his stellar defense has never wavered, and it was that asset that had him back in the fold in Games 4 and 5. He put that defense on display in the third, when Bauer popped up toward the seats in right-field foul territory. Heyward raced over, climbed the wall and reached back toward the field as the wind brought the ball back, making the catch as he held himself up by the front-row railing. Bauer applauded the Cubs’ right fielder as he headed back to the dugout.

“It was a good catch. It was a good play,” Bauer said. “I can respect people who play the game hard and go out there and make good plays.” 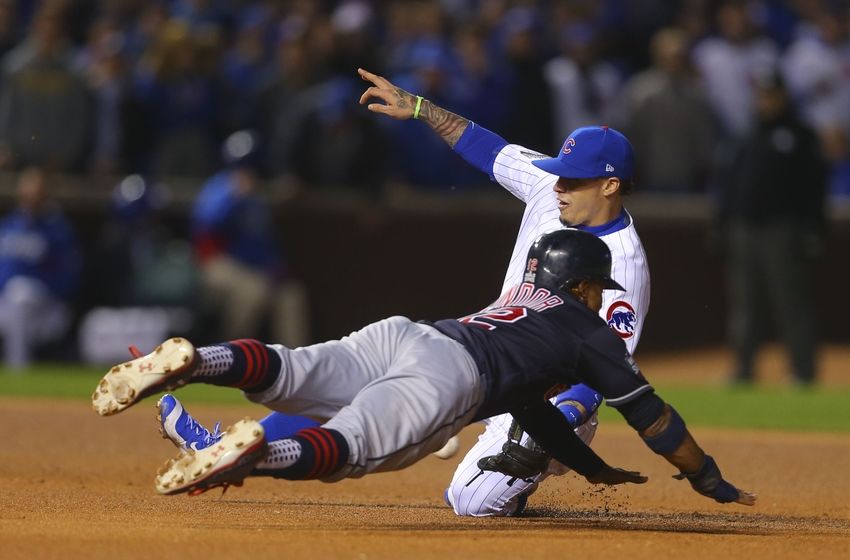 Javier Baez of the Chicago Cubs tags out Francisco Lindor of the Cleveland Indians after a throw from catcher David Ross.

“I liked our at-bats tonight; guys continued to grind. I think the swing in momentum helps us out a little bit. I’ve never been so happy to go to Cleveland in my life. It’s going to be a rocking atmosphere over there.”— Ross

“I wanted to win tonight. We’ll evaluate when we get back to Cleveland, and we’ll be ready to go. We’ve got to win one more game.” — Bauer, on heading home