CHICAGO — Wrigley Field went silent as the baseball dropped into the right-field bleachers. Not only did the Indians utilize their familiar October formula on Saturday night, overcoming an early threat by the Cubs’ offense, but now one of Chicago’s native sons quieted the sea of blue surrounding him.

Jason Kipnis grew up on the North Side, rooting for the Cubs, but now he wears a Cleveland uniform and he helped put his new town one win away from ending its own World Series drought. In a 7-2 victory over Chicago in Game 4 of the Fall Classic, Kipnis’ three-run shot in the seventh punctuated another dominant showing by ace Corey Kluber as the Tribe took a 3-1 lead in the best-of-seven Series.

“We’ve got one more to get, and that’s probably going to be the hardest victory of the year,” Kipnis said. “But this is a special night for me and this team. To take the first two here — now we’ve got a couple tries to win one more. We’re ready to get it.”
As the crowd inside the famous ballpark at the corner of Clark and Addison sat stunned, the audience attending the watch party at Progressive Field in Cleveland was roaring with approval. The Cubs’ 108-year title drought has been well-documented over the course of this magical season. Meanwhile, the Indians have the longest run of championship starvation in the American League, but they are now one win from their first crown since 1948.

“Nothing changes,” Indians manager Terry Francona said. “We’re going to show up tomorrow. The only thing that changes is we’ll pack our bags, because we’re going to go home one way or the other. We’ll show up and try to beat a really good pitcher tomorrow, and that’s what we always do. Nothing needs to change.”

“We know we have to win out,” Chicago’s Kris Bryant said. “If we want to get to the last game, we have to win the first one, then the next one. It’s one game at a time, don’t change anything, have fun, smile, just be ourselves.”

Cleveland’s recipe for winning this October has been simple: Get an early lead, receive quality innings from the starter and turn the ball over to Andrew Miller and Co. The Cubs tried to sidestep that plan in the first inning, when Anthony Rizzo’s bat awoke with a slashed RBI single off Kluber that scored Dexter Fowler from second. That 1-0 advantage would not last long, however.

Kluber, who has fashioned a 0.89 ERA in an overpowering postseason, settled down and locked in over six innings, striking out six and walking one. The ace’s ERA is the second-best postseason mark in baseball history among pitchers with at least 30 innings in one postseason. Burt Hooton posted a 0.82 ERA in 33 innings for the Dodgers in 1981.

“They were definitely more aggressive tonight,” said Kluber, who blanked Chicago over six innings in Game 1. “That’s how most teams approach hitting against me. It wasn’t anything that we weren’t prepared for. We still used the same scouting reports, the same information and stuff. It was maybe just adjusting sequencing a little bit.”

Kluber’s latest gem gave Cleveland’s offense time to go to work.
Facing Cubs right-hander John Lackey in the second inning, Carlos Santana launched a home run and Kluber helped his cause with an infield single that led to a second run. On Kluber’s swinging bunt, third baseman Bryant made a costly throwing error, his second of the inning, and Lonnie Chisenhall scampered home as the Indians took the lead for good. 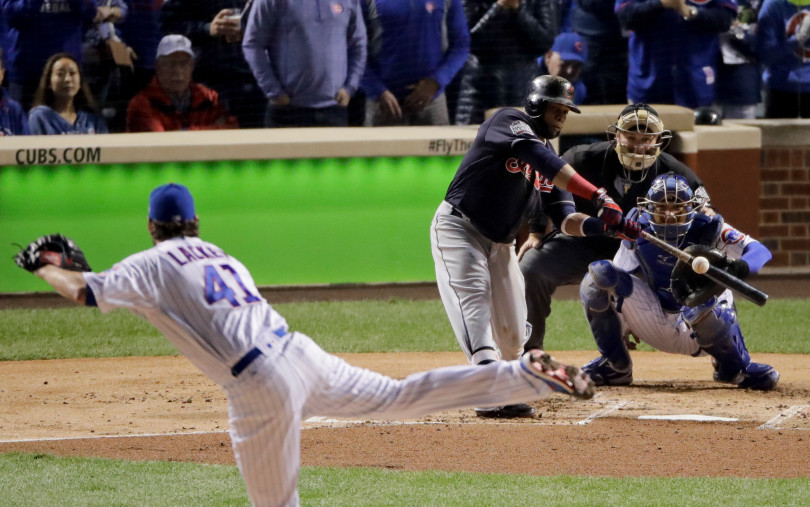 “We made mistakes,” Cubs manager Joe Maddon said. “But again, we have to do more offensively to give ourselves a chance.”
From there, Cleveland kept tacking on and taking Wrigley’s typically raucous crowd out of the equation.

Kipnis doubled and scored on a single by Francisco Lindor in the third. Lindor walked and later crossed the plate on a sacrifice fly by Chisenhall in the sixth. And then, Kipnis broke things open with a heartbreaking three-run shot off Cubs left-hander Travis Wood. The Indians second baseman crushed a 3-1 offering from Wood over right field and into the bleachers. As Kipnis rounded the bases, cheers from the visitors’ dugout could be heard.

Maddon was hoping to avoid facing what he called the Indians’ three-headed monster of Miller, Bryan Shaw and Cody Allen, and only had to deal with Miller this time. The lefty struck out two in his two innings — setting a single-postseason record for a reliever with 29 strikeouts — but also served up a solo homer to Fowler in the eighth. Dan Otero closed it out with a scoreless ninth for the Tribe. 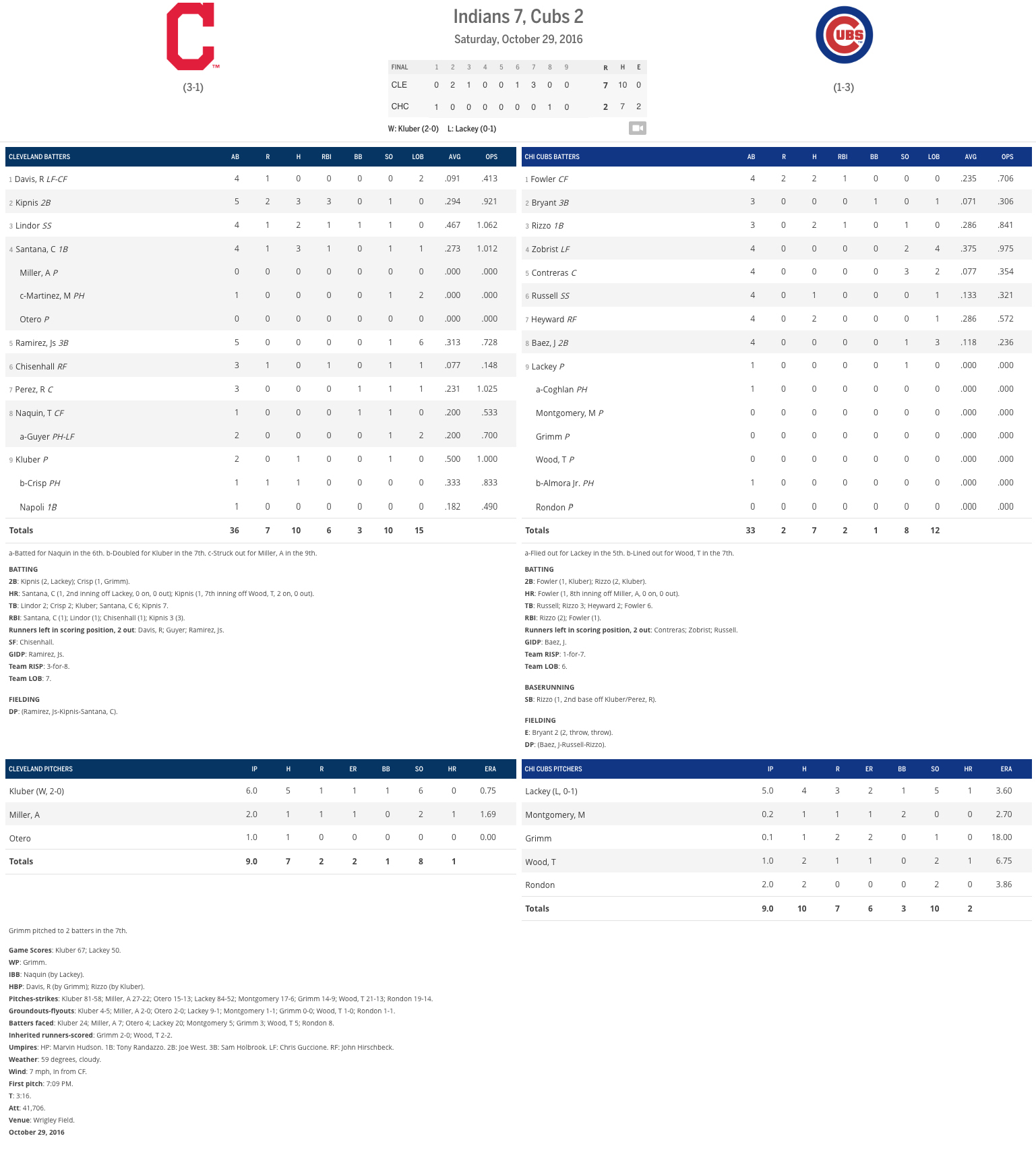 Santana’s shot: With no designated hitter available at the National League park, Francona agonized over how to handle his lineup for Game 4. The manager went with Santana over Mike Napoli at first base, and the decision paid dividends. After the Cubs grabbed a 1-0 lead in the first, Santana opened the second inning with a towering home run off Lackey. Per Statcast™, Santana’s homer (his third of the postseason) had an exit velocity of 102 mph and was projected to travel 381 feet. The blast went against a strong wind, but still landed several rows deep in the right-field bleachers.

“I thought Carlos swung the bat really well,” Francona said. “I still wasn’t pleased that Nap didn’t play, because like the things we talked about before the game, he’s kind of the heart and soul of our team. But he’ll be in there tomorrow.”

You go, we go: Fowler wasn’t intimidated by either Kluber or Miller. In Game 1 at Progressive Field, Kluber struck out five of the first seven batters he faced, but Fowler blooped a ball to left field just past a diving Rajai Davis for a double to lead off the first on Saturday night. One out later, Fowler scored on Rizzo’s single, and became the first Cubs player to tally in a World Series game at Wrigley Field since Peanuts Lowrey in Game 7 in 1945. Fowler then led off the eighth with his second postseason home run, sending a 2-2 pitch from Miller into the left-field bleachers.

“I thought we had better at-bats against Kluber tonight than we did a couple nights ago, but the hits just weren’t there,” Maddon said. “Although, they hit some homers tonight. We hit some balls good enough for homers, but the wind was blowing in. We just didn’t pick the proper night to do that.”

Kluber pitches in: The Cubs opted to intentionally walk rookie Tyler Naquin in favor of pitching to Kluber with two outs and a runner on second in the second inning. Lackey fell behind in the count, 3-1, and then watched Kluber foul off three straight pitches. The Indians’ starter, who had only four at-bats during the regular season, then chopped the eighth pitch of the battle up the third-base line. Bryant charged, grabbed the roller and made an off-target throw to Rizzo at first. As the ball rolled away from the first baseman, Chisenhall scored from second base, giving the Tribe a 2-1 advantage. Kluber became the first Indians pitcher to have a hit in the World Series since Chad Ogea in 1997, and Bryant had his second throwing error of the inning.
“That was amazing,” Kipnis said of Kluber’s hit. “People don’t know, he’s actually a decent hitter. You go back for a couple times, he’s done that. He’s not that bad of a hitter.”

Kipnis’ heartbreaker: A native of Northbrook, Ill., Kipnis admitted that having the Cubs reach the World Series was an emotional moment for him. He rooted for the Cubs as a kid, and he still has family and friends who cheer on the North Siders, but now Kipnis has been charged with trying to extend the Cubs’ championship drought. The second baseman helped the Tribe’s cause in the seventh with a line-drive three-run shot into the right-field seats, quieting a stunned Wrigley Field crowd. The blast, which had a 105-mph exit velocity, per Statcast™, gave Cleveland a commanding 7-1 lead. Kipnis became the first player to hit a three-run homer in a World Series game at Wrigley since Babe Ruth’s famous called shot in Game 3 of the 1932 Classic.

“I haven’t been going the way I wanted to at the plate,” Kipnis said. “But I’ve just been plugging away and keeping at it because I know one at-bat might be big. Tonight, I found something a little bit again, and we came up huge, our offense finally bailed out our staff.”

Dance machine: Cubs reliever Mike Montgomery showed his acrobatic skills in the sixth. The Indians had a runner at first when Santana smashed a line drive at the lefty that registered at 112 mph and knocked Montgomery’s glove off his right hand. The reliever was able to grab the ball and throw to first, but it pulled Rizzo off the bag. Santana was credited with an infield single, and was then forced at second on Jose Ramirez’s fielder’s choice. Chisenhall followed with a sacrifice fly to open a 4-1 lead.

Statcast tracks Carlos Santana’s single that exited his bat 112 mph to knock off Mike Montgomery’s glove, his hardest hit ball of the season

“You’re basically in the stands warming up. It’s different. People yell stuff at you. In a way, I think it’s almost comical, because they think it has an effect on you. It was almost like I heard stuff at the beginning when they were yelling, but once you start to focus, you just kind of zone it out. You can’t write what they were yelling at me.” — Kluber, on warming up in the Wrigley Field bullpen down the right-field line

“He’s probably running on fumes, and he’s not letting it bother him. We’ll take him over everybody every day. It’s unbelievable the things he’s doing in this postseason and the way he’s doing it. I’m really proud of him. All his hard work is really paying off for him right now.” — Indians pitching coach Mickey Callaway, on Kluber