CHICAGO — With all the attention on the first World Series game at Wrigley Field since 1945, it seems the Indians have been an afterthought. They asserted themselves on Friday night, spoiling the North Siders’ long-awaited party.

Coco Crisp’s pinch-hit RBI single in the seventh inning was enough to support another stellar showing by Cleveland’s pitching staff in a 1-0 victory over the Cubs in Game 3. Led by starter Josh Tomlin and the Tribe’s Andrew Miller-powered bullpen, the Indians grabbed a 2-1 lead in the best-of-seven Series.

“I think we’ve been an afterthought all year long,” Tomlin said. “It doesn’t bother us. We know we have a group of guys who grind it out and try to play the game we know how to play and don’t listen to anybody else.”
The shutout was the fifth in these playoffs for the Indians, establishing a Major League record for a single postseason.

How important is Game 3? The team winning the third game of a 1-1 World Series has gone on to win the championship 37 of 57 times (64.9 percent), including in four of the past six years.

“We know we’re going to have our hands full to beat these guys,” Tribe manager Terry Francona said. “Tonight was a good example. I mean, that was as close a ballgame as you’re ever going to find, and we found a way to manage to win that game. You know, we say it all the time. We want to be one run better. That’s about as true to form as you can get.”

The atmosphere leading up to the game was electric. It felt like New Year’s Eve at Times Square. Generations of fans who never thought they’d see the Cubs in the World Series started the party outside the ballpark early on Friday, even if they didn’t have a ticket for the game. But the ball never dropped, as the Cubs were held scoreless for the fourth time this postseason and never gave the 41,703 in attendance a reason to erupt.

The most shutout losses in a postseason by an eventual World Series winner is three, by the 1981 Dodgers.

“I think we were trying to speed up things too much today,” Baez said. “We have to slow down and play our game, and take it at-bat by at-bat and pitch by pitch.” 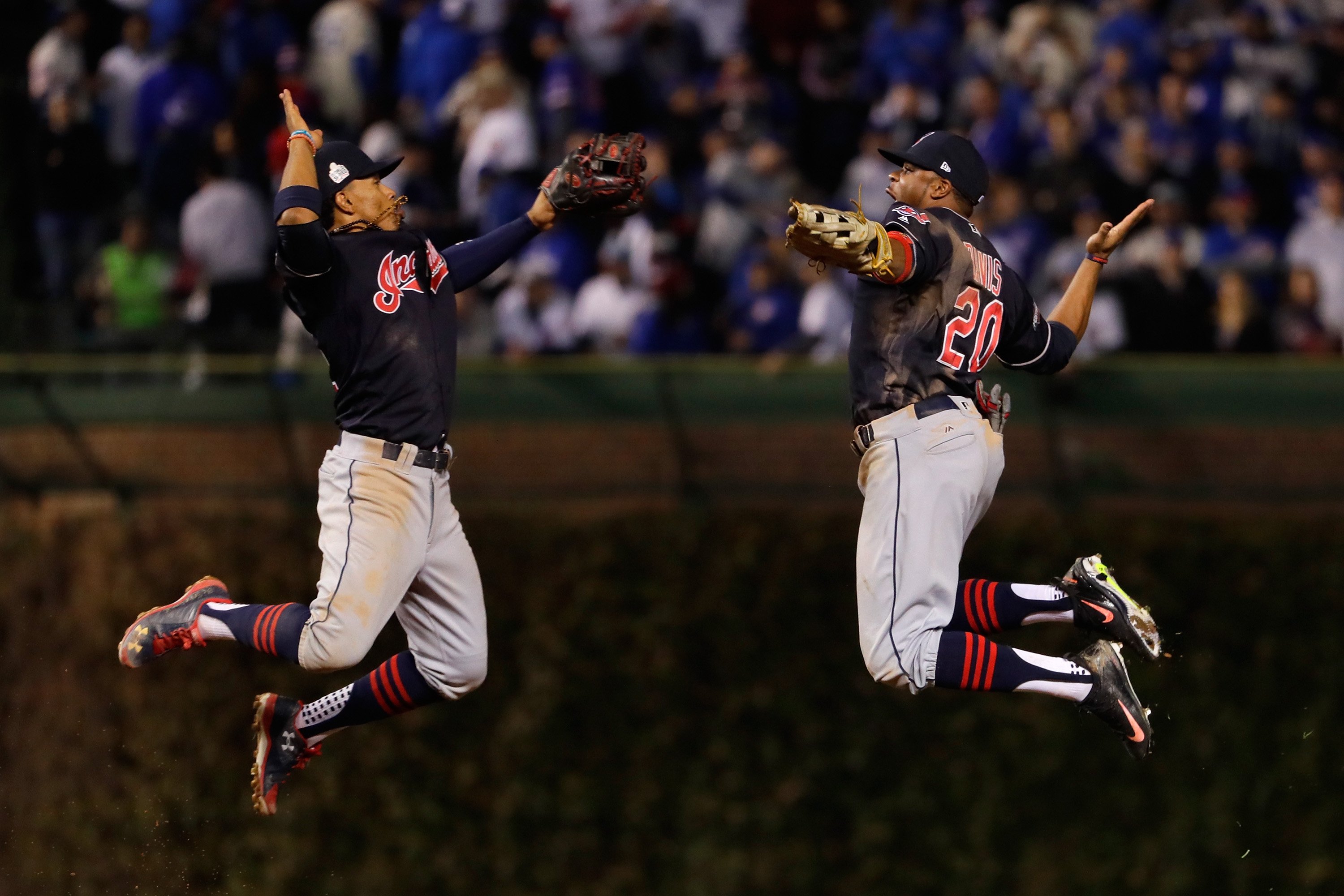 The elements favored the hitters, as the wind was blowing out to left-center at 14 mph, but Cubs starter Kyle Hendricks and Tomlin ignored the flags and induced soft contact. Hendricks did not have a single clean inning, and the Cubs righty was pulled after loading the bases with one out in the fifth. But Justin Grimm got Francisco Lindor to ground into a 4-6-3 double play, which was celebrated with an emphatic fist pump by the reliever.

Tomlin, who was pitching in front of his mother and ailing father, gave up only two hits over 4 2/3 innings before he was lifted for Miller, who extended his postseason scoreless streak to 15 innings, striking out three in 1 1/3.

“He did a wonderful job,” Indians pitching coach Mickey Callaway said of Tomlin. “He’s pitched so well this postseason, and it’s been the same formula: strike one, get ahead, control the count and limit baserunners, especially the free passes. He’s such a competitor. Anytime that he has any kind of motivation, he’s going to get the job done. He was terrific tonight.”

Francona opted to lift Miller in favor of using Crisp as a pinch-hitter in the seventh, and it paid off. Cleveland had runners at first and third, and Crisp smacked an RBI single to right. That was all the Indians needed.

“I know he has some natural cut to his fastball, and I was just hoping to get the barrel to the ball, and I did,” Crisp said of his clutch hit off Carl Edwards Jr. “It cut in on me, and I was just fortunate that it dropped in front of the right fielder.”

Kyle Schwarber, limited to a pinch-hitter role, popped up to shortstop Lindor in the eighth in his only at-bat.

“I thought it was a well-played game,” Cubs manager Joe Maddon said. “I thought we played great defense again tonight. We were just out of the zone way too often. We’ve got to get our strike zones organized offensively, and if we do, we’ll be fine.” 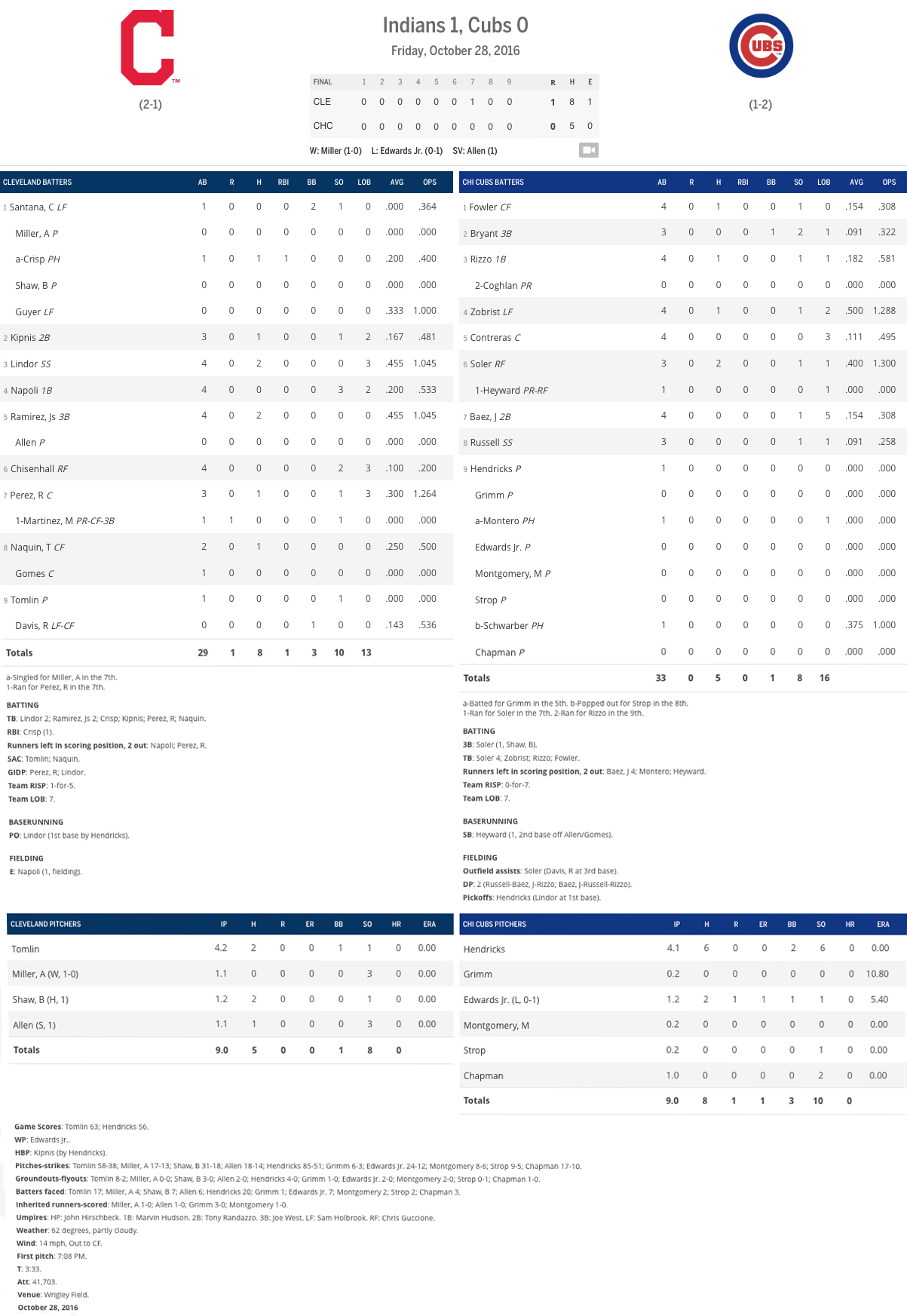 Crisp breaks deadlock: Miller was in the on-deck circle with a helmet on and a bat in his hand in the seventh, but he never made it to the batter’s box. After a wild pitch from Edwards allowed Michael Martinez to sprint from second to third base, and Rajai Davis drew a walk to put runners on the corners with one out, Crisp pinch-hit for Miller and pulled a pitch into shallow right field.

Cubs’ last stand: In the bottom of the ninth, Anthony Rizzo led off with a single against Allen. Three batters later, Jason Heyward reached on a hard grounder that ate up first baseman Mike Napoli for a costly error. With Baez in the batter’s box, Heyward stole second base to put the winning run in scoring position. With the Wrigley Field audience on its feet, Allen struck out Baez to bring an end to the drama.

“I was trying to hit the fastball but trying to see the curveball at the same time,” Baez said. “You have to have one plan. You can’t have two plans at the plate. It’s a mistake — you learn from it.”

Grimm grounds Tribe: Tyler Naquin opened the fifth with a single, and Hendricks later walked Carlos Santana and hit Jason Kipnis with a pitch to load the bases with one out. At that juncture, Maddon pulled his starter and handed the ball to reliever Grimm. Lindor, who singled in each of his first two at-bats, worked the count full, but then hit a sharp grounder to Baez. The Cubs’ second baseman initiated an inning-ending 4-6-3 double play, eliciting a celebratory roar from the Wrigley Field faithful. It marked the first GIDP of the year for Grimm, who had none in his 68 regular-season outings.

“That double play, the way my teammates picked me up,” Lindor said, “it was huge. They just told me, ‘Keep on going. It happens; it’s part of the game.'”

Escape artist: Hendricks dodged some early jams. The Indians had runners at the corners with one out in the first, but he picked off Lindor at first, then struck out Napoli to end the threat. Hendricks got Roberto Perez to ground into an inning-ending double play in the second. In the fourth, Cleveland had runners at first and second when Lonnie Chisenhall hit a grounder down the first-base line. Rizzo grabbed the ball and spun to throw out Jose Ramirez at second. Hendricks then fooled Perez on an 88-mph sinker for a called third strike to end the inning.

“To me, he was trying to be too perfect with the pitches,” Cubs catcher Willson Contreras said. “That’s why I went out there a few times and told him, ‘Don’t try to do too much with your pitches. You have enough movement.’ He did a nice job.”

“You can’t avoid all of the Cubs gear. You can’t avoid the billboards, the excitement, the talk of it. Every channel you turn on here is talking about the World Series games, as they should be. This is as good as it gets, and two great teams that haven’t had this spotlight in a while. It’s special to be a part of. You hope that stuff isn’t a distraction, and we’ve done a good job of that.” — Lindor

“When you’re facing good pitching, sometimes it happens. We didn’t have a lot of opportunities today. Tomlin pitched well, and their bullpen pitched well. We were going to have to beat [Corey] Kluber anyways. We’ll get a chance [Saturday].” — Ben Zobrist, on the Cubs’ struggling offense.