CLEVELAND — Game 7 of the World Series. It’s a magical scenario that Addison Russell probably fantasized about while playing Little League games a few years ago. It’s something Cubs fans haven’t considered since 1945. Now 22, Russell helped that dream become a reality, hitting a grand slam and driving in six runs to help the Cubs post a 9-3 victory over the Indians on Tuesday night at Progressive Field.

Kris Bryant chipped in with four hits and a solo home run, Jake Arrieta struck out nine over 5 2/3 innings of two-run ball and the Cubs got another extended outing from closer Aroldis Chapman to set up the 37th winner-take-all Game 7 in World Series history. The most recent such game came in 2014, when San Francisco edged Kansas City.

On Wednesday night, the Cubs will try to end the longest championship drought in professional sports (108 years), while the Indians have a chance to capture their first World Series title since 1948 and join their neighbors, the Cleveland Cavaliers, as 2016 champions.

“I think tomorrow we’re going to come to the clubhouse with a lot of confidence and a lot of energy,” Russell said. “Game 7, it’s a kid’s dream.” 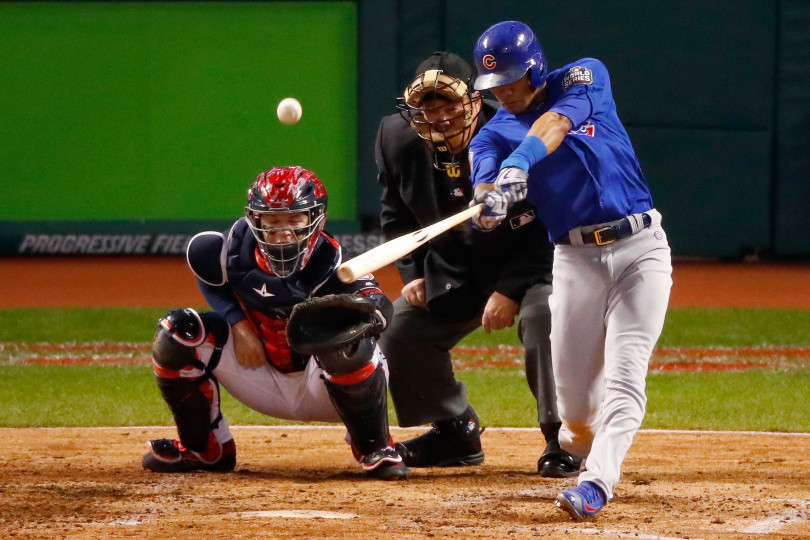 Russell, who became the second-youngest player behind Mickey Mantle (21 years old, 1953) to hit a grand slam in a Fall Classic game, tied a single-game World Series record with his RBI total, which he reached in the third inning.

“I feel like that was the hit of the night there,” Bryant said. “Anytime you get four runs on one swing, and to go up, I think it was 7-0, that was huge. He’s had a lot of big home runs this postseason. That might have been the biggest.”

Chapman, who recorded the final eight outs of Chicago’s win in Game 5, was called on in the seventh and got the final out to end a Tribe threat. He then turned in a scoreless eighth and returned for the ninth even after Anthony Rizzo’s two-run shot in the top of the inning gave the Cubs a seven-run lead. Manager Joe Maddon gave the big left-hander a break after he walked Brandon Guyer to start the ninth, with Pedro Strop and Travis Wood getting the last three outs of the Series-tying win.

Arrieta said he’d be available in Game 7. So will Jon Lester and everyone else on the Cubs’ roster.

“Everyone’s available tomorrow,” Rizzo said. “That’s what it is — there’s no tomorrow after tomorrow. It’s an elimination game. You lose, you go home. You win, you’re a hero.” 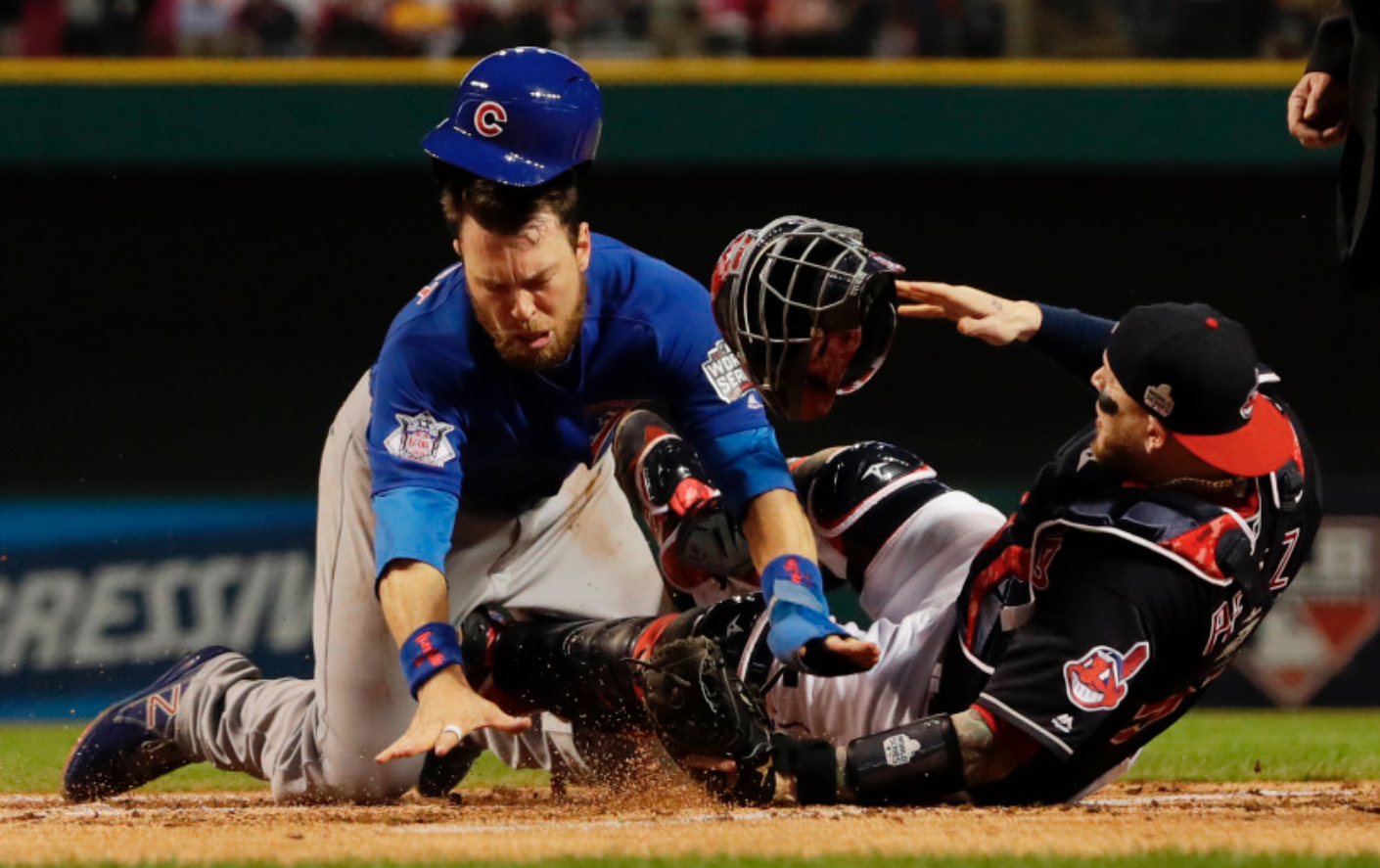 One loss from elimination after the Indians’ Game 4 win, the Cubs are back on even footing with Cleveland as they push to become just the sixth team since the Fall Classic adopted the 2-3-2 format in 1925 to win a World Series after trailing a Series, 3-1. The most recent example of such a feat was pulled off by the 1985 Royals against the Cardinals.

This was the 65th time the World Series reached Game 6, and the 40th time the trailing team forced a Game 7. Of the previous 39 teams to force a Game 7 by winning Game 6, 21 won the championship.

The last team to win Games 6 and 7 of a World Series on the road, as the Cubs are hoping to do, was the 1979 Pirates, whose comeback came at the expense of the Orioles.

“We’ve talked about this before we even started. Try to make them use pitching, even in a loss,” Indians manager Terry Francona said. “So we hung around enough, at least Chapman had to pitch. You never know, maybe that helps us.”

Cleveland’s outfielders contributed to Chicago’s 3-0 lead in the first. Bryant started the rally with a two-out home run, and the Cubs had two on when Russell dropped a double to right-center that fell because of miscommunication between Tyler Naquin and Lonnie Chisenhall.

“Off the bat, I thought that was going to be kind of a routine play,” Russell said. “It looked like there was a little bit of miscommunication there. They didn’t put a glove on it, therefore it counts as a hit, which I was totally stoked. It pushed me for the next at-bat as well, coming up with bases loaded.”

Francona said Naquin should have taken charge on the ill-fated play.

In the third, the Cubs loaded the bases with one out against starter Josh Tomlin, who was lifted for Dan Otero. Russell greeted Otero with a home run to center, his third of the postseason.

Jason Kipnis, who grew up as a Cubs fan in suburban Chicago, tried to rally the Tribe. He doubled in the fourth for the Indians’ first hit off Arrieta and scored on Mike Napoli’s single and added a solo home run with two outs in the fifth.

“Jake was really good. On his regular rest, he was outstanding,” Maddon said. “We came out hitting the baseball. We looked more normal. We hit our home runs. Like I said before, I think the weather could possibly help us out. I think it actually did. I just know our hitters felt better about everything.”

“It’s Naquin’s ball,” Francona said. “That was an unfortunate play, because we thought we were out of the inning with one, kind of regroup, and instead it’s three and J.T. had to keep pitching.”

The Cubs liked the idea of coming back to Cleveland. They got Kyle Schwarber back in the lineup as the designated hitter, and Arrieta and Wednesday’s starter Kyle Hendricks were working on normal rest. It helped on Tuesday that Arrieta knew something about elimination games. He threw a shutout against the Pirates in the National League Wild Card Game last year.

The Indians will counter with ace Corey Kluber, who has two of Cleveland’s wins in this Series.

“There’s a lot of confidence going in, knowing he’s pitching,” Tomlin said. “He’s been the ace of our staff for a couple years now. He does it year in and year out. So, having him on the mound, it definitely gives us all the confidence in the world. But, we have confidence in everybody in that clubhouse.

“Tomorrow is the last game of the year. Everybody’s going to be ready to play.” 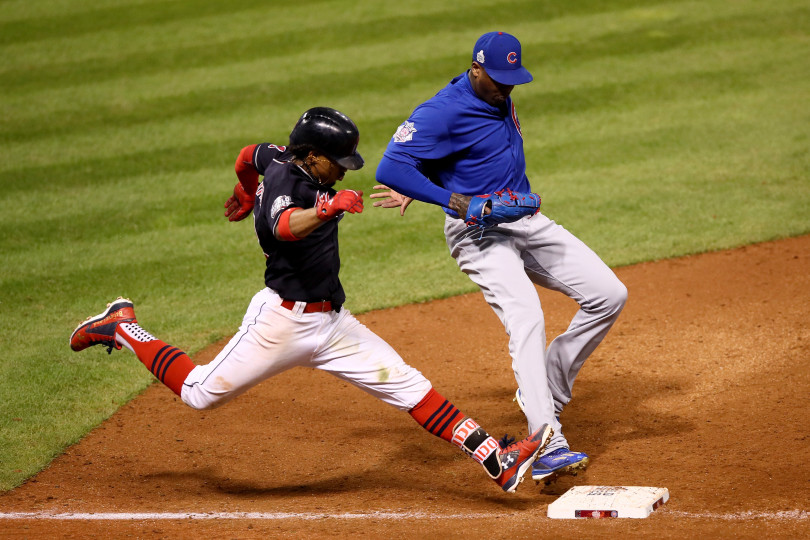 Aroldis Chapman #54 of the Chicago Cubs forces out Francisco Lindor #12 of the Cleveland Indians at first base during the seventh inning. 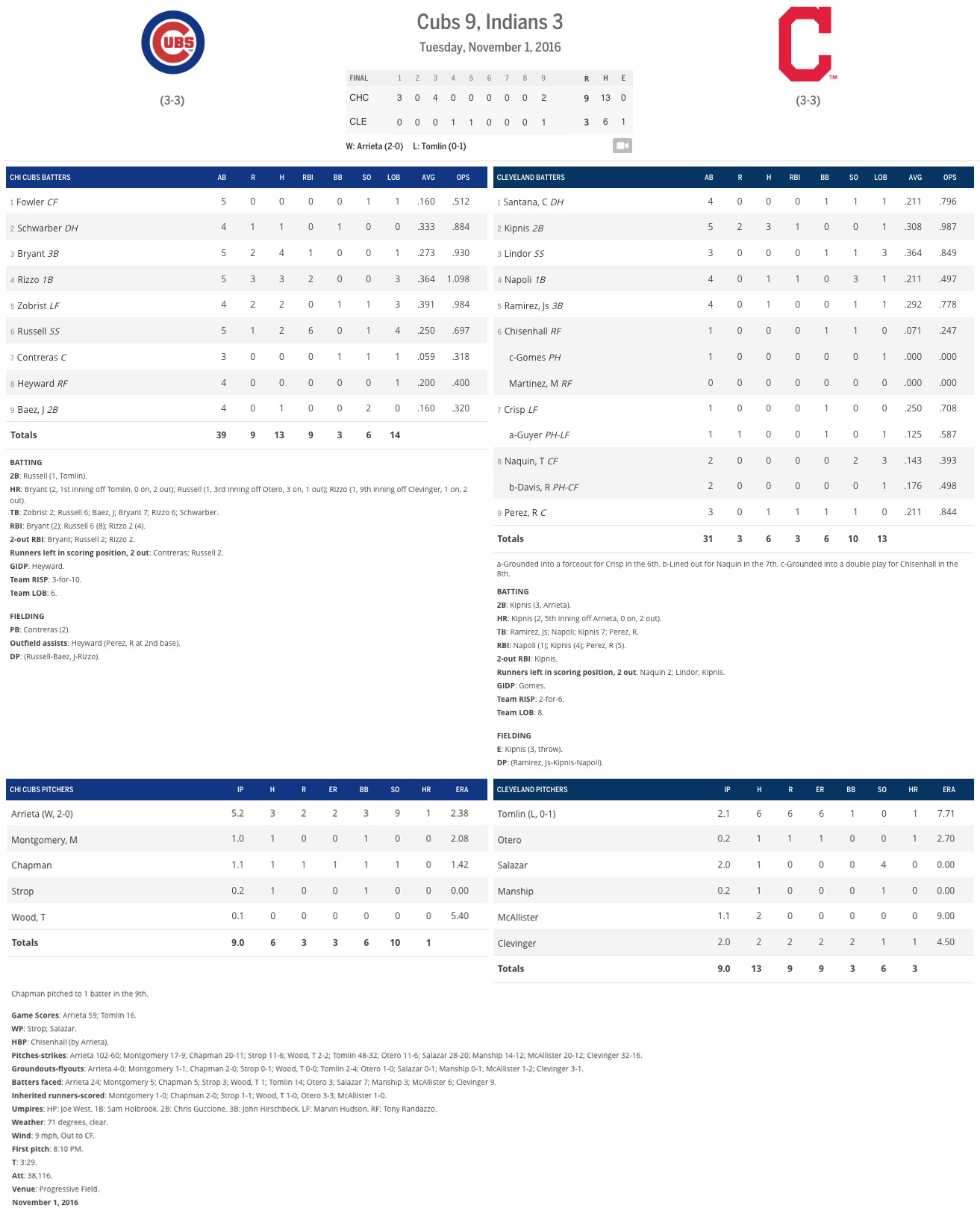 Fast start: With two outs in the first, Bryant launched an 0-2 curve from Tomlin a Statcast-projected 433 feet to left for his second World Series home run. Rizzo followed with a single to right, and he reached third on Ben Zobrist’s single. Both tallied on Russell’s double to right-center as the Cubs gave Arrieta a 3-0 lead before he threw a pitch.

“I knew that was all we were going to need tonight,” Arrieta said of the first-inning runs.

Vroom, vroom: Russell had been quiet in the World Series, with four hits and two RBIs over the first five games. Not anymore. Schwarber walked to open the third, and one out later, Rizzo and Zobrist singled to to chase Tomlin. Otero took over, and Russell connected on a 2-0 pitch, sending it a Statcast-projected 434 feet to center for his second career grand slam — and first extra-base hit in the World Series. Russell is the first Cubs player with a grand slam in the World Series, and the fourth player in Major League history to drive in six runs in a Series game, joining Albert Pujols (2011), Hideki Matsui (’09) and Bobby Richardson (1960).

Center of attention: Even with the lopsided nature of Game 6, Indians fans will remember the costly misplay by Naquin in the first inning. Russell’s double was a flared fly ball to shallow right-center, where Naquin had the best chance at making the catch. The center fielder looked at Chisenhall, who was looking at Naquin, as the ball dropped to the grass between them. Based on where Naquin and Chisenhall were positioned on the play, and how long the ball was in the air (4.68 seconds), the projected catch rate on the fly ball was around 95 percent, per Statcast™.

In the third, the communication problems arose again. Bryant sent a pitch from Tomlin to a similar spot, and Chisenhall cut in front of Naquin to make the catch. On the play, Naquin slid at the last second and looked frustrated as he sat on the ground, with his hands on his knees. Kipnis helped the rookie up and offered some words before they retreated to their positions.

“It was kind of one of those in-betweeners,” Naquin said of the play in the first. “Lonnie got a good break, I got a break. It’s just one of those deals, one of those deals you wish you could take back. In the moment, me being the center fielder, I need to take charge on that, not rely on that. That’s my mistake.”

Added Chisenhall: “I should’ve caught that ball. I made the aggressive move on it. The ball was moving toward me. Somebody’s got to catch it. It should’ve been me.” 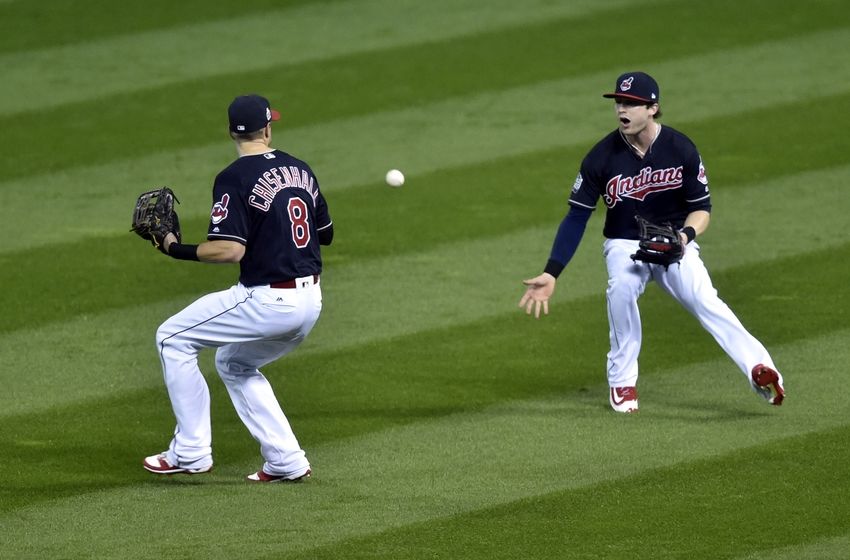 On a pop-up hit by Addison Russel, ball dropped to the grass between Paquin and Chisenhall for a double.

Kipnis does his part: Following an 0-for-5 showing in Game 1 of the Fall Classic, Kipnis has been a consistent threat within Cleveland’s lineup. The second baseman has hit .381 (8-for-21) with two homers, four RBIs and five runs scored in the past five games against the Cubs. Kipnis accounted for the Tribe’s only runs against Arrieta, doubling and scoring in the fourth and belting his two-out solo shot in the fifth. Kipnis’ opposite-field homer had an exit velocity of 105 mph and traveled a projected 387 feet, per Statcast™.

“Today was a good day, personally,” Kipnis said. “But at the same time, I’d trade them all in for a ‘W.’ That’s the game of baseball. Some days you’ve got it; some days you don’t. But you keep working at it to stay ready for the opportunity if it presents itself.”

“Who else would you want? That’s our guy. That’s our stud. That’s our bona fide ace. If you ask everybody in here who you want on that mound, you’re going to get Corey Kluber as the answer. We’re pumped about that.” — Kipnis, on Kluber starting Game 7

“I want to pitch tomorrow.” — Chapman, when asked if he was available for Game 7