CLEVELAND — Corey Kluber walked off the mound to a thunderous ovation from his Progressive Field audience on Tuesday night. The Indians ace was overpowering on the World Series’ overwhelming stage, delivering a classic performance against the Cubs that put Cleveland three wins away from baseball’s promised land.

In a 6-0 Game 1 victory, Kluber sliced his way through Chicago’s lineup in a vintage outing, piling up nine strikeouts in six-plus brilliant innings. The leader of the Tribe’s staff set a World Series record with eight strikeouts in the first three innings, and he kept his foot on the gas for the duration of his start, outdueling lefty Jon Lester.

“I don’t know if there is one thing you can put your finger on,” Kluber said of his postseason dominance. “I think that it’s, obviously, there’s more riding on each game. So, not that there is less importance on a regular-season game, but it’s almost like you have that extra level of intensity or focus and stuff that it’s not really something you can replicate.”

The win was the first in the Fall Classic for the Indians since Game 6 in 1997, against the Marlins, who broke Cleveland’s hearts with a win in Game 7. For the Cubs, who have not won a championship since 1908 — 40 years before the Tribe’s last title in ’48 — their wait continues. Not since Game 6 of the 1945 Series against Detroit has Chicago won a World Series affair.

“I’m not disappointed by any means except for the fact that we did not win,” Cubs manager Joe Maddon said of his team’s performance. “I thought we came out ready to play. They pitched well. … I know we had 15 punchouts, I get it, but the quality of the at-bats were not that bad.”

The Indians, who have been one of baseball’s best teams at home all season long, improved to 8-1 in the postseason and 5-0 in front of the Cleveland faithful. The past 14 times that Game 1 of the best-of-seven Series was won by the home team, that club went on to hoist the Commissioner’s Trophy. Overall, teams with a 1-0 lead have won the World Series 71 out of 111 times.

“We were fortunate enough to win this one,” Tribe closer Cody Allen said. “We’ll enjoy it tonight, but we have to show up and be ready tomorrow. It’s a seven-game series, a lot of stuff can change.”

Cody Allen gets Javier Baez to strike out looking and Addison Russell and Miguel Montero to go down swinging to complete the Tribe’s 6-0 win.

Behind a two-run first and an impressive solo homer by Perez in the fourth, the Indians grabbed a swift 3-0 advantage. Perez later spread the game open with a three-run blast in the eighth against Hector Rondon. The six-run showing was more than sufficient with Andrew Miller and Co. lurking in the bullpen. Following Kluber’s gem, Miller applied the clamp and Allen finished the job.

“We knew [the Indians’ formula] going in,” Cubs catcher David Ross said about facing Kluber, Miller and Allen, “but I think the moral of the story is we got to see those guys on Day 1. Hopefully, that will pay off later.”

Miller’s appearance was hardly devoid of drama, though.

After Kluber allowed a leadoff single to Ben Zobrist in the seventh, Indians manager Terry Francona summoned his 6-foot-7 leverage weapon from the ‘pen behind the center-field wall. Miller issued a walk to Kyle Schwarber, marking the reliever’s first walk against a lefty batter since July 2 (his only other one this year). Cubs second baseman Javier Baez then pulled a pitch into left field for a single, loading the bases with no outs.

That set up a crucial confrontation with pinch-hitter Willson Contreras, who flared a pitch to shallow center. Rajai Davis sprinted in and made the catch, but he missed a chance to double-up Schwarber, who was nearly to third before retreating back to second base. From there, Miller took matters into his own hands. The lefty struck out Addison Russell and Ross, adding to Miller’s mounting October strikeout total (24 in 13 2/3 innings).

“It was a grind,” Miller said. “I think I can be better than I was, but it’s a tribute to them, the at-bats that they put together. I feel like I had some opportunities I just missed on, and that’s a credit to their ability to take some pitches and to their preparation, I guess. We got it done, that’s all that matters.”

When Ross could not check his swing, the Progressive Field crowd roared and Kluber could be seen shouting with them in the dugout. The Cubs then put runners on the corners with two outs against Miller in the eighth, but the reliever again quashed the comeback by striking out Schwarber.

“You’re trying to see the ball as long as you can,” Ross said of his approach to Miller. “Looking back, I wish I would’ve just stood there and not swung at all if I could rewind — if it was that easy. And then he throws one right down the middle, and America hates me.”

Those escapes went a long way in helping Kluber to his third victory of this postseason.

“We need him, and we’re going to need him more,” Francona said. “His routines and his work ethic, that’s why, here late into October, the needle on the gas tank doesn’t point towards empty.”

Beyond the strikeouts, Kluber scattered four hits and issued no walks. He allowed two doubles — one to Zobrist to open the second and another to Schwarber in the fourth. In these playoffs, Kluber now has a 0.74 ERA with 29 strikeouts in four starts (24 1/3 innings).

“Obviously, there’s more riding on each game,” Kluber said of elevating his game in October. “It’s almost like you have that extra level of intensity or focus.”

Striking first: Francisco Lindor seems to thrive when the spotlight is on him, so it was only natural that Cleveland’s shortstop collected the first hit of the World Series with a two-out single in the first. Lester then issued a pair of walks to load the bases, setting up a key battle with Jose Ramirez. Batters were 0-for-12 with seven strikeouts against Lester with the bags full this season, and Ramirez had a .902 OPS with the bases loaded. Something had to give, and it did in the form of a chopper into no-man’s land up the third-base line. Ramirez’s unlikely infield single scored the night’s first run. The Indians then took a 2-0 lead when Lester followed with a hit-by-pitch against Brandon Guyer, who led the Majors with 31 bruisings this year. 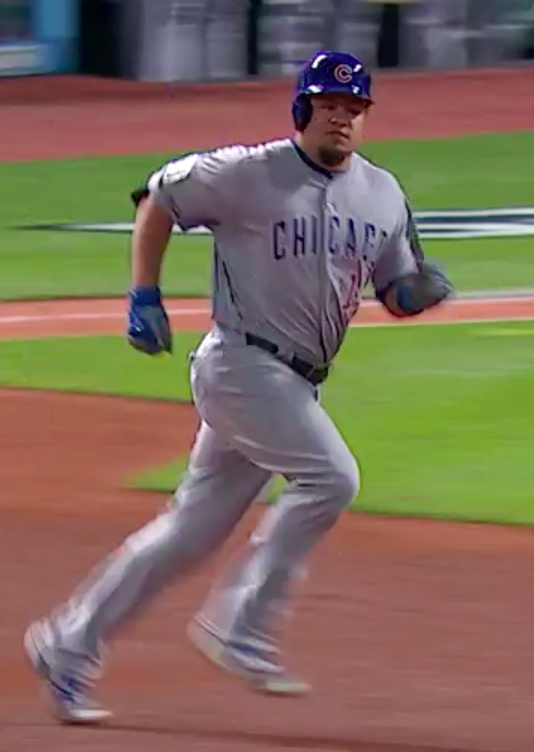 “There is an importance on small ball, but you can’t try to hit a swinging bunt,” said Francona, referring to Ramirez’s single. “That’s a little bit of good fortune. Then, Guyer got hit, which he is really good at. That happens to him a lot. He’s up on the plate and he doesn’t get out of the way. But, leading up to that, we took some walks. We didn’t go out of the zone. So sometimes you get rewarded when you have baserunners.”

Schwarber’s return: Cubs fans in the crowd cheered Schwarber’s at-bats during batting practice, eager to see what he could do after missing most of the season because of a knee injury. He struck out in the second, but he doubled off the right-field wall with two outs in the fourth. It was Schwarber’s first hit in the big leagues since Oct. 20, 2015, when he homered in the first inning of Game 3 of the National League Championship Series against the Mets. He drew a walk against Miller in the seventh, but he struck out to end the eighth and strand two runners.

“How about his at-bats? First hit of the year in the World Series — that’s pretty impressive,” Ross said. “I thought he had great at-bats tonight. I wouldn’t have looked that good after that much time off.”

Roberto’s rocket shot: With one out in the fourth inning, Perez pulled an 0-1 fastball from Lester on a line over the 19-foot wall in left field. The solo home run gave Cleveland a 3-0 advantage and was unique in how well it was struck. With an exit velocity of 113 mph, the homer marked the hardest Perez has ever hit a ball in the Majors. According to Statcast™, the home run was also the hardest-hit ball off Lester this year and the hardest-hit home run of this postseason.

“I’m just playing with a lot of confidence right now,” Perez said. “I’m not trying to do too much at the plate. I’m just trying to control my emotions. First World Series experience. [I’m] just trying to go out there and compete and try to get good ABs up there. And try to get on base and make something happen. It’s an unbelievable feeling.”

Lindor vs. Lester: Knowing Lester’s issues with throwing to bases, Cleveland was looking for moments to be aggressive on the basepaths. That element came into play right away, as Lindor stole second after his first-inning single. Per Statcast™, Lindor had a steal time of 3.9 seconds after taking a secondary lead of 25 feet. The ball popped out of the hand of Ross on the transfer, but it would have been difficult to nab Lindor.

In the third inning, Lindor tried again. After another single, Lindor bolted for second and made it in 3.8 seconds after a secondary lead of 25 feet. This time, though, Ross maintained his grip, had a two-second pop time, a 0.6-second exchange and threw Lindor out. On the bang-bang play, Baez made a quick slap tag on Lindor’s left arm just before his fingertips touched the base.

“Lindor’s stolen base was big,” Davis said. “It came in a critical moment in that inning to help get us some runs. That took Lester out of his game a little bit, and we were able to get a couple guys on base and get a big hit when we needed it.” 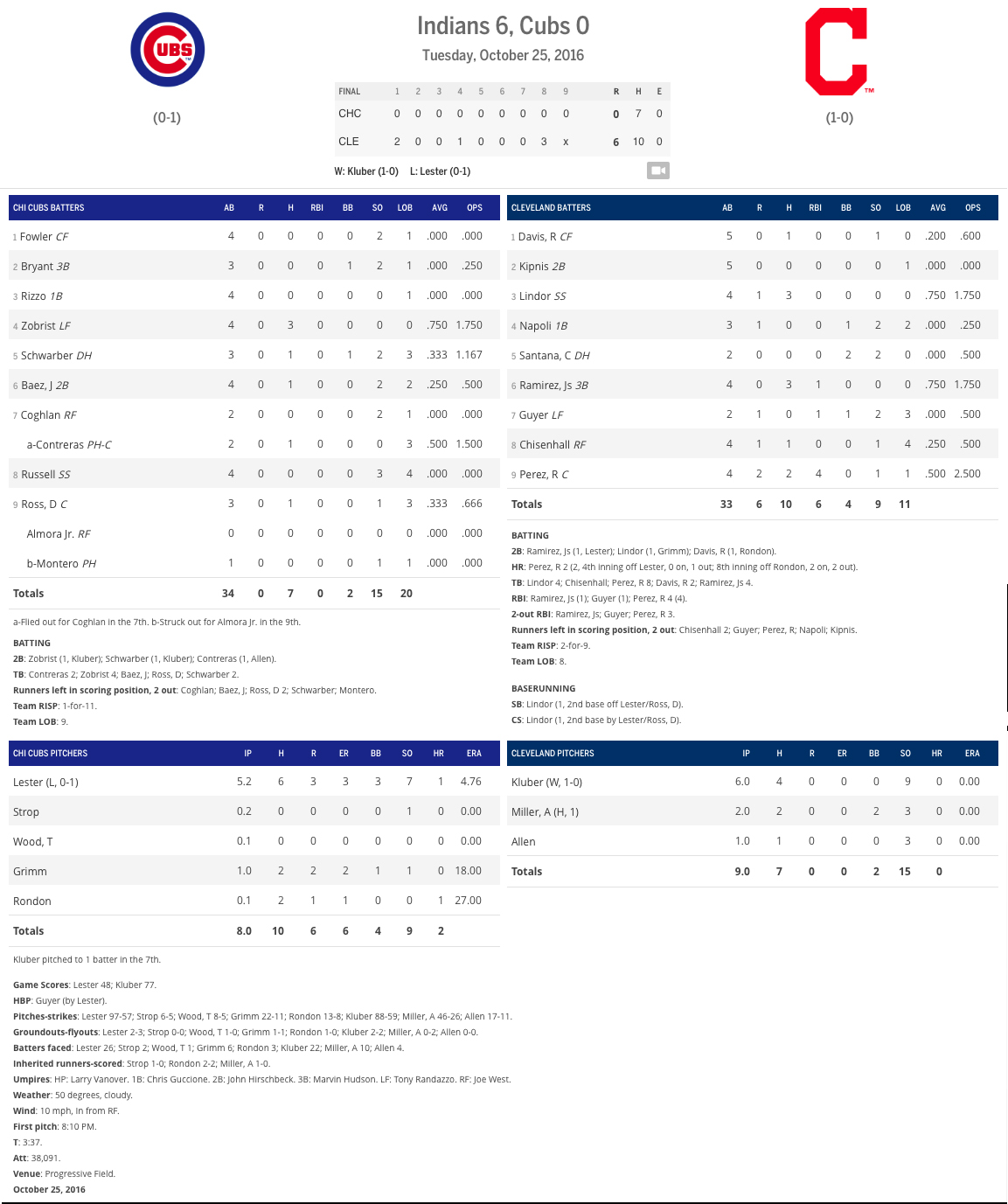 Every young pitcher, even every professional pitcher, should watch him pitch. It’s just a treat. He’s so good. The way he can manipulate the ball is just incredible. We’re really lucky to have him on our side.
—Miller, on Kluber

This didn’t feel like a 6-0 game. We felt like we were in it the whole game. After the first three innings, I thought we had some pretty good at-bats the rest of the way. That showed with the pitch counts getting up there for their guys. So, yeah, there’s a lot of things to build off of, and positives to take away.
—Chicago’s Kris Bryant

• Perez became the first Indians batter to hit two homers in a World Series game and the first player to hit two in his first Fall Classic game since 2002 (Troy Glaus in Game 1 for the Angels). Jim Thome (twice), Manny Ramirez (twice) and Perez are the only players in Cleveland history to have a multihomer game in the playoffs.

• When Kluber struck out the side in the second inning, he became the first Indians pitcher to achieve the feat in the World Series. Kluber then did it again in the third inning. His eight strikeouts through the first three innings broke the previous World Series record of seven, which was shared by Bob Gibson, Orlando Hernandez and Randy Johnson.

• Kluber’s nine strikeouts were the most in a World Series game by an Indians pitcher. The previous mark of seven was shared by Jaret Wright (Game 7 in 1997) and Orel Hershiser (Game 1 in ’95). Six of Kluber’s strikeouts were looking.

• Cleveland’s four shutouts this October are tied for the most in a single postseason in Major League history. The San Francisco Giants (2012 and ’10), New York Yankees (1998) and New York Giants (1905) also had four shutouts in one postseason.