CHICAGO — For the first time since 1945, the Cubs are going to the World Series. You shouldn’t be surprised. That’s been their plan since Spring Training, when manager Joe Maddon told them to embrace the target. All they had to do to erase years of angst was have the pitcher with the best ERA in the Majors in 2016 beat the best pitcher on the planet, and Kyle Hendricks did just that on Saturday night.

Anthony Rizzo and Willson Contreras each belted solo home runs to back Hendricks — who outdueled Clayton Kershaw — and power the Cubs to a 5-0 victory over the Dodgers to take the National League Championship Series, four games to two, at a rocking Wrigley Field. Yes, the Cubs are going to the World Series.

“There’s a lot of pent up angst and emotion in this city, and all over the nation, Cubs fans who have been loyal through the hard times,” Chicago’s Ben Zobrist said. “We know that, but the bottom line is you have to execute at the right time and stay here in 2016. These guys have done it all year long with all the expectations on their backs. We only have four more, so let’s go do it now. We’re in the exact spot we wanted to be in. We’ve got a chance to do something that hasn’t been done in 108 years. Let’s go do it.”

Hall of Famers Ernie Banks, Billy Williams and Ron Santo never played in a World Series but these young Cubs will, and now face the Indians on Tuesday night in Cleveland.

“I think this is one of the biggest things in the world of sports after so many years of trying to get here,” Williams said. “People have been waiting for so long, and all of a sudden, we’re here. This is not the end — we want to go a little farther. All the guys in that clubhouse, they’re in there celebrating now, but they have something else in mind.”

Hendricks treated it as just another game. Think about this: The Cubs faced the minimum in a playoff game.

“There was a lot of talk, obviously, about the guy on the other side there, Kershaw,” Hendricks said. “Best in the game, he lived up to it in Game 2, but my focus was the same as always, make good pitches, simplify as much as I can, and keep my team in the game. It’s not just me out there. We’ve got a good group of guys behind me, awesome lineup. This make it’s so much fun to accomplish it with them.”

Do simple better. That’s another Maddon-ism.

“Unbelievable job by Joe ever since he got here,” Cubs president of baseball operations Theo Epstein said. “Changed the culture at the Major League level. We loved everything that was bubbling up in the organization from the Minor Leagues, but to finish it off in the big league level, Joe is the best in the business in getting guys to relax, be themselves, focus.

“We embraced the target this year, his leadership has been everything for a lot of our young guys to settle in and play as well as they did tonight.”

The Cubs faced Kershaw in Game 2, and he didn’t get much support but still won, 1-0. On Saturday, an error by Andrew Toles contributed to a Cubs run in a two-run first, and Hendricks did the rest. Toles collected the first hit off the right-hander when he singled to lead off the game, but he was snuffed out on a double play by second baseman Javier Baez — who shared NLCS MVP honors with left-handed pitcher Jon Lester.

The team that scored first won each game in this series, and the Cubs got off to a quick start in the first. The Wrigley Field crowd cheered Kershaw’s first pitch because it wasn’t a strike, and Dexter Fowler, who had a career .409 average against the Dodgers’ ace, doubled on the third pitch from the lefty. Fowler scored on Kris Bryant’s single, and Bryant eventually tallied on Zobrist’s sacrifice fly.
“Making the World Series is no small feat,” Kershaw said. “Give a lot of credit to the Cubs the whole series, they started swinging the bats the last three games. Better team.” 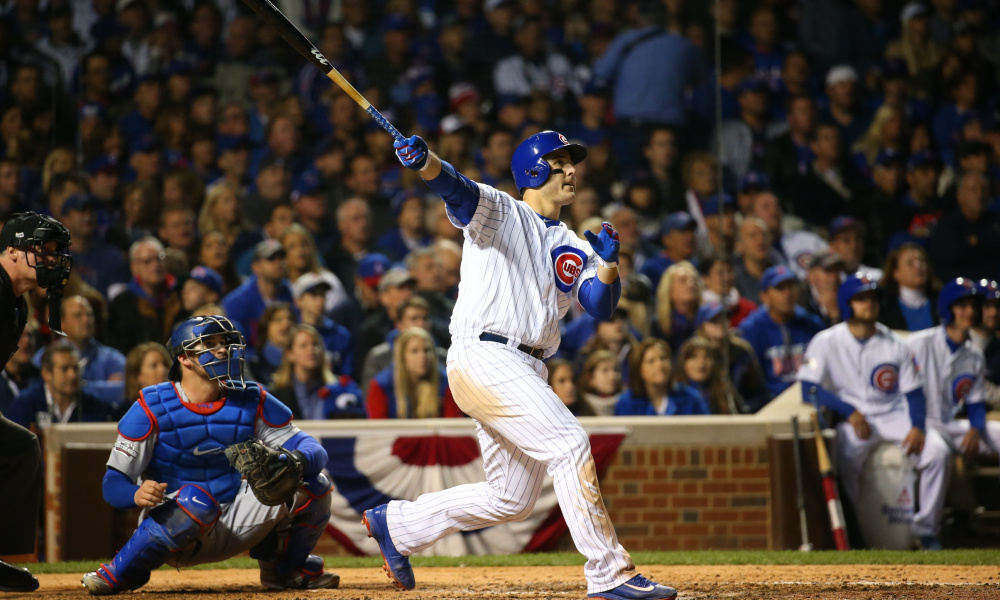 Anthony Rizzo connecting on a 1-1 pitch in the fifth inning for a solo home run.

Contreras led off the fourth with a blast to left. According to Statcast™, the exit velocity was 105.5 mph, and it was the third-hardest-hit homer off Kershaw this season. Of course, Kershaw only served up eight homers all season. Rizzo didn’t need to hit his that hard, just far, and he crushed a 1-1 pitch into the right-field bleachers with two outs in the fifth.

“You know what, I think that they beat us,” said Dodgers manager Dave Roberts. “We made mistakes. And you hate to have sour grapes, but the better team won the series. That’s why you play seven-game series, and they showed it.

“I think that the first thing I saw is the Cubs’ hitters, they had a great game plan tonight [against Kershaw]. And there was a couple mistake sliders that they took advantage of. But they were running counts, they used the whole field, and there was traffic all night for Clayton. And he gave it everything he had, but when they did — when he did make a mistake, they made him pay.”

Hendricks, a Dartmouth grad who majored in finance, began this season as the fifth starter, but will forever be remembered in Cubs lore as the best pitcher this season. He was lifted after Josh Reddick’s single with one out in the eighth, striking out six.

“I thought we had a plan to get the ball up, but this guy was the ERA leader,” Roberts said. “He pitched well all year long, he consistently made pitches, didn’t make any mistakes tonight, kept the ball down, kept us off-balance. And I think that you could have a plan, but if the opposing pitcher doesn’t make mistakes, then it’s still tough to execute. I thought, again, Kyle pitched a perfect game.”

Aroldis Chapman took over, got a double play to end the eighth, and then a scoreless ninth to end the game.

Hendricks wasn’t fazed by fireworks that were ignited outside Wrigley Field during Joc Pederson’s at-bat in the second inning. It’s OK — Cubs fans have been waiting a long time to celebrate. 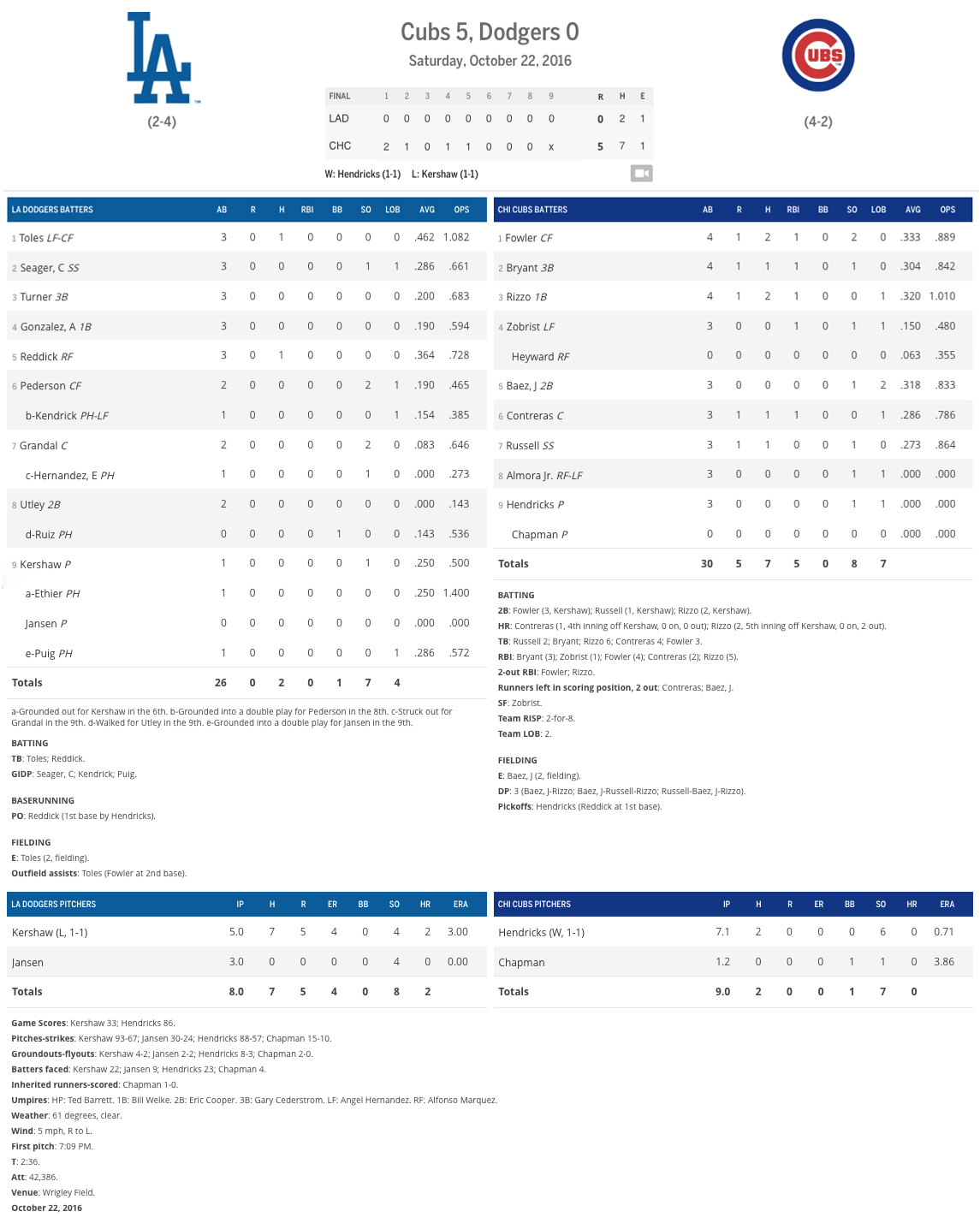 Dazzling leather: The Cubs’ defense shined again. Toles singled to lead off but was snuffed out on an acrobatic play by — who else? — Baez, who grabbed Corey Seager’s grounder, somehow tagged the speedy Toles, and then threw off balance to first in time for a double play. Baez, however, was charged with an error in the second, when Reddick’s ball bounced off his chest and then out of his glove. But Hendricks and Rizzo combined to pick off Reddick at first to end the Dodgers’ inning.
“That was absolutely huge,” shortstop Addison Russell said of the Cubs’ first double play. “That built up momentum going into the second inning. That was a huge moment right there.”

Shakey Toles: Toles, who made a bad throw to the plate in Game 4, cost Kershaw a run in the first inning when, after a long sprint, he lost Rizzo’s fly ball in the left-center gap in the lights and it dropped for a two-base error. Toles, who might have had a double-play chance on Bryant at first base if he had caught the ball, committed two errors in 48 regular-season games.

“It went up in the lights,” said Toles. “Joc was coming, but I couldn’t hear him call it, so I looked out of my peripheral [vision], and when I looked back, it was in the lights.”

You go, we go: Fowler showed why the Cubs wanted him back last offseason. He doubled to lead off the first and eventually scored on Bryant’s single. In the second, Fowler hit an RBI single to drive in Russell, who had doubled. Fowler knew what to expect from Kershaw; he entered the game 18-for-44 (.409) in his career against the lefty.

“We were just trying to make him feel uncomfortable,” Fowler said of their approach with Kershaw. “We’re at home. We’re comfortable. We wanted to make him throw some pitches. I think everybody took a deep breath. You never know how it’s going to start. Once that dude, Kershaw, gets his momentum, he keeps it going. We tried to take that out.”

Jansen, no joke: After Kershaw’s five innings, Roberts gave the ball to Kenley Jansen. In what might be his final Dodgers appearance with free agency imminent, Jansen pitched a career-high three perfect innings with four strikeouts.

“All I cared about was doing my part and helping the team,” said Jansen. “We just want to win the World Series, bad. This group of guys, we were together. I was locked in, and it didn’t matter if they wanted me for one, two or three innings. I just wanted to go out there and keep us in the game.” 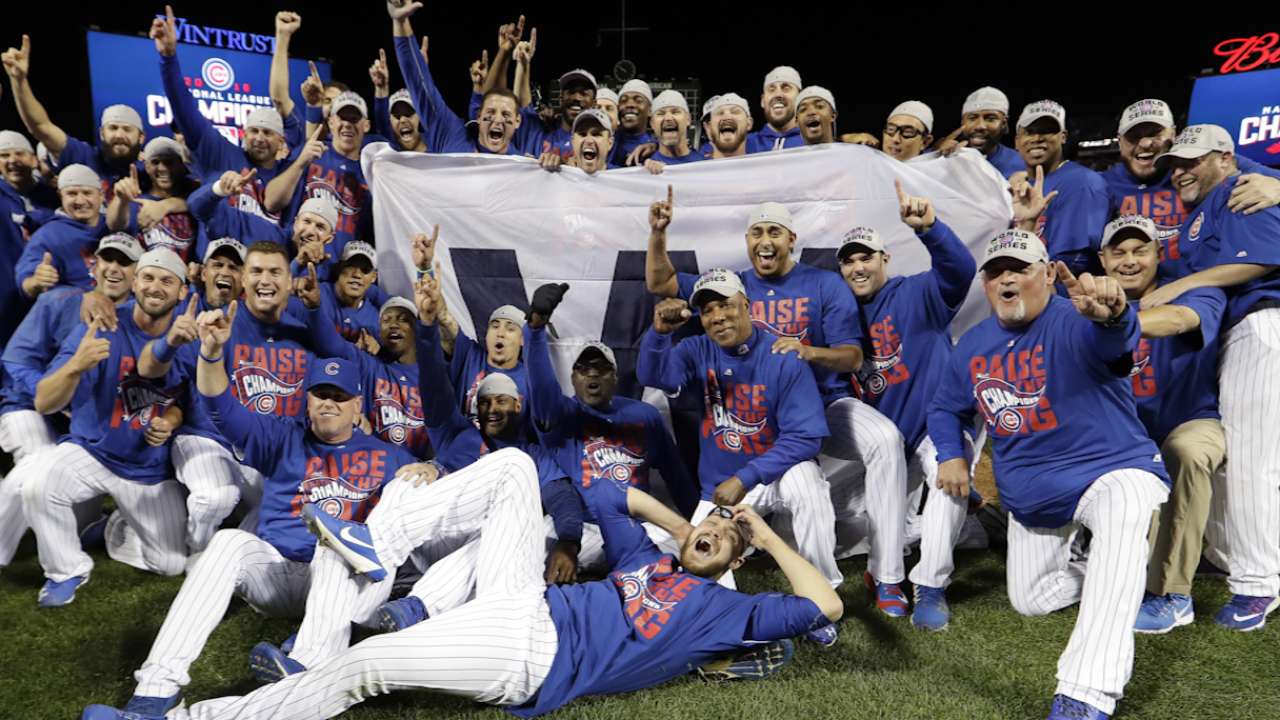