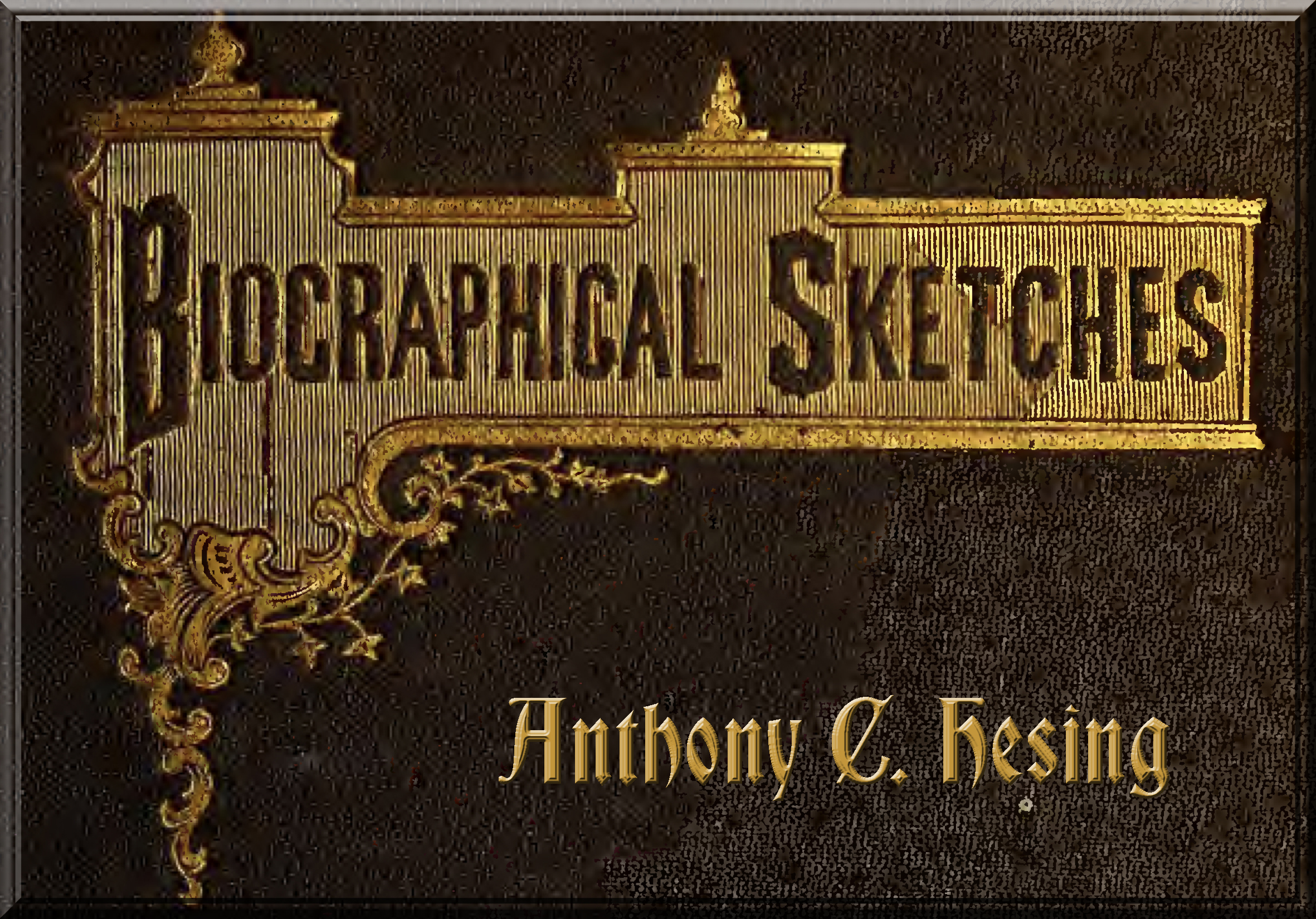 The Grand Duchy of Oldenburg sustains much the same relations to Germany that Illinois does to the United States. The country is one vast and fertile plain, producing all kinds of grain in rich abundance, and furnishing pasturage for countless herds of cattle. It was in Vechta, a small village in this Duchy, that the Hon. Anthony C. Hesing, editor of the Illinois Staats Zeitung, was born, of honorable, but not illustrious, parentage. There is fitness and suggestiveness in the fact that the leading German journalist of the West should hail from what might with propriety be called the Prairie State of Europe.

Mr. Hesing was born on the 6th of January, 1823. His father was a brewer and distiller. The advantages for education which he gave his son were only those commonly enjoyed by the youth of that vicinity.

At the age of fifteen years, the lad left the school-room to join the innumerable company of workers, and with no thought of wealth or fame. He was apprenticed to a baker and brewer. It was expected that he would remain with his employer for years, but it Avas not long before a changecameoverthespiritofhisdream. Hismasterprovedarrogant
and unjust in his treatment, and after enduring his abuse for about two years,youngHesingresolvedtobreakthechainthatgalledhim. Incom- mon with thousands of Germans, his longing eyes were turned toward America as the Eldorado of real life, the ultima thule of terrestrial hope. Reaching our shores, he at once directed his steps toward Cincinnati. At that time Chicago was far behind the “Queen City of the West,” and was hardly known beyond the ocean. It was supposed that beside tlio Ohio River, and not at the head of the Lakes, was to be the metropolis of the interior. Tlie .same inetropolitan in.stinct wliieli years later drew Mr. Hesing to Chicago, attracted him, in 1839, to Cincinnati. 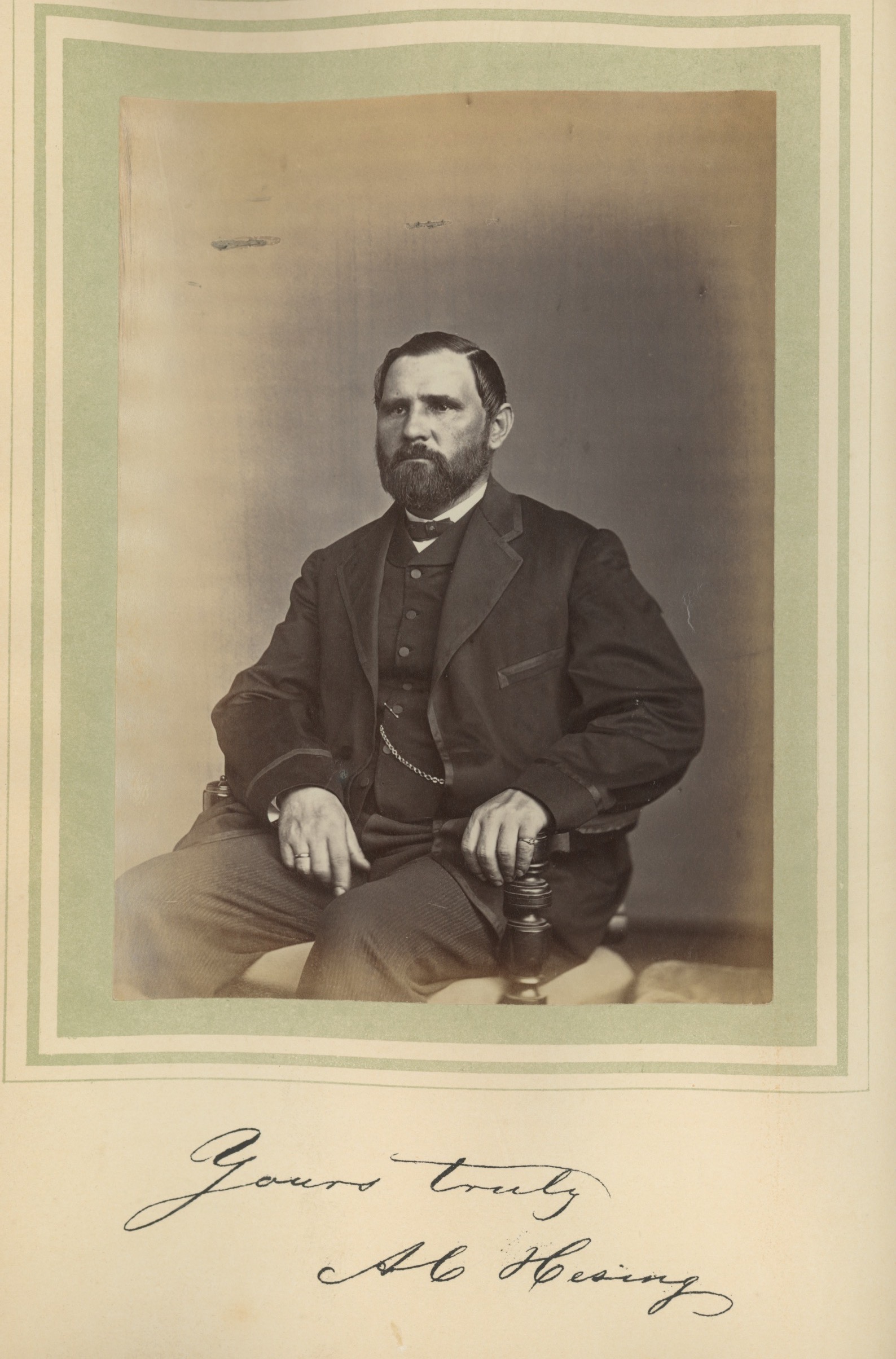 Mr. Hesing began life in America as clerk in a grocery store. It was not long, however, before the whole burden of the business rested upon his shoulders. While in his teens, he was”a man among men;” maturity of appearance and deportment enabled him to pass unchallenged for several years older than he actually was. He carried on his business successfully in all respects, and became identified, not only with the business portion of community, but in political circles. In the Harrison campaign, he joined the Whig party. Although he was not a citizen at that time, he rendered the party valuable service by his ardent advocacy of the Whig principles and nominees. In recognition of his services he was, in 1842, made a member of the Whig Committee of Hamilton County, he still being a voter only in prospectu. In the Scott campaign of 1852, we find him a member of the State Executive Committee.

In 1847, Mr. Hesing returned to his childhood’s home, after an absence of eight years. His visit was brief and unimportant, except from the fact that it occasioned his acquaintance with Miss Louisa Lamping, who afterwards became his wife, accompanying him on his return to this country.

After a sojourn of several months in Baltimore, Mr. Hesing took his bride to Cincinnati. The grocery of his earlier days he sold, and with the jiroceeds built a hotel on tlie corner of Race and Court streets, of which he became the landlord, in com])any with a Mr. Edward Pretorious. He continued in this business until 1854, when, his partner committing suicide, he disposed of his interest in the concern and left the State, no more to return, except occasionally.

He at once came to Chicago, and, discerning in its marvelous growth and matchless opportunities the promise of metropolitan supremacy in the near future, he purchased a patent brick dry clay machine, and opened a brick-yard at Jefferson, only a few miles from the heart of the city. This proved an unprofitable experiment. There was an excellent market for the brick, but the clay turned out to be unfit for the use of the kiln. Mr. Hesing received only about one hundred and fifty dollars for the labor of the entire season. We next find him associated with Charles S. Dole, Esq., in the same business, but in another locality. In this second trial Highland Park, now Clinton Park, near the Lake shore, w^as chosen. Here good clay was found. The Adams House, the Milwaukee Railroad Round House, many private residences, and several miles of sewer were constructed from the Hesing-Dole brick. The business proved profitable until the catastrophe of 1857 came on and put a stop, for a time, to nearly all improvements and building. The firm was then obliged to discontinue its operations.

In common with so many others in this vicinity, and, indeed, throughout the country, Mr. Hesing was by this disaster reduced to penury. Although only a short distance from Chicago, he was without money enough to pay his fare to the city! Nothing daunted, however, by the buffetings of poverty, he determined to come here and attempt to retrieve his lost fortune. His first attempt at recuperation was as a commission merchant. He hired a small store on Kinzie street. North Side, and commenced business, having the assistance of Charles S. Dole & Co. In the following spring he gave up his store, and accepted the unambitious office of collector of water-toll on the North Side, for which position he was indebted to the friendly firm just named. He received for his services forty-five dollars per mouth.

Mr. John Gray was elected Sheriff of Cook County in the succeeding spring, and Mr. Hesing was appointed his deputy. He remained in this office until 1860, when, in recognition of his faithful services, the Republican party nominated and elected him Sheriff. This proved the turning point in his fortune. After serving the county faithfully two years, Mr. Hesing became partner in the Illinois Staats Zeitung, and from that time to the present he has devoted himself with single and tireless energy to journalism. He is at present sole proprietor and editor of the Zeitung. As the editor of the leading German daily in the Northwest, he has gained an influence in local and State politics second to that of no other member of the Republican party of Illinois. Having a clear and powerful and patriotic purpose, and being careful withal to reflect as well as guide the public sentiment of his countrymen, our politicians have learned to respect his opinions and heed his suggestions.

Throughout the war Mr. Hesing was an ardent supporter of the distinctive measures of Mr. Lincoln’s Administration, and when the work of reconstruction commenced, he was found upon the radical side of the question, and in the Congressional campaign of 1866 he contributed largely to the great Republican victory in which it culminated.

Since entering upon journalism, Mr. Hesing has held no political office. Like James Gordon Bennett, Horace Greeley, Thurlow Weed and other great American journalists, he believes it more honorable to give tone and tendency to public sentiment through the press, than to go through the routine of official duties. Taking a deep and abiding interest in all the minutiae of politics, he never derives any personal benefits from it. It would be well for the country if its politics were controlled by such unselfish politicians.