The Chicago Times was a newspaper in Chicago from 1854 to 1895, when it merged with the Chicago Herald.1 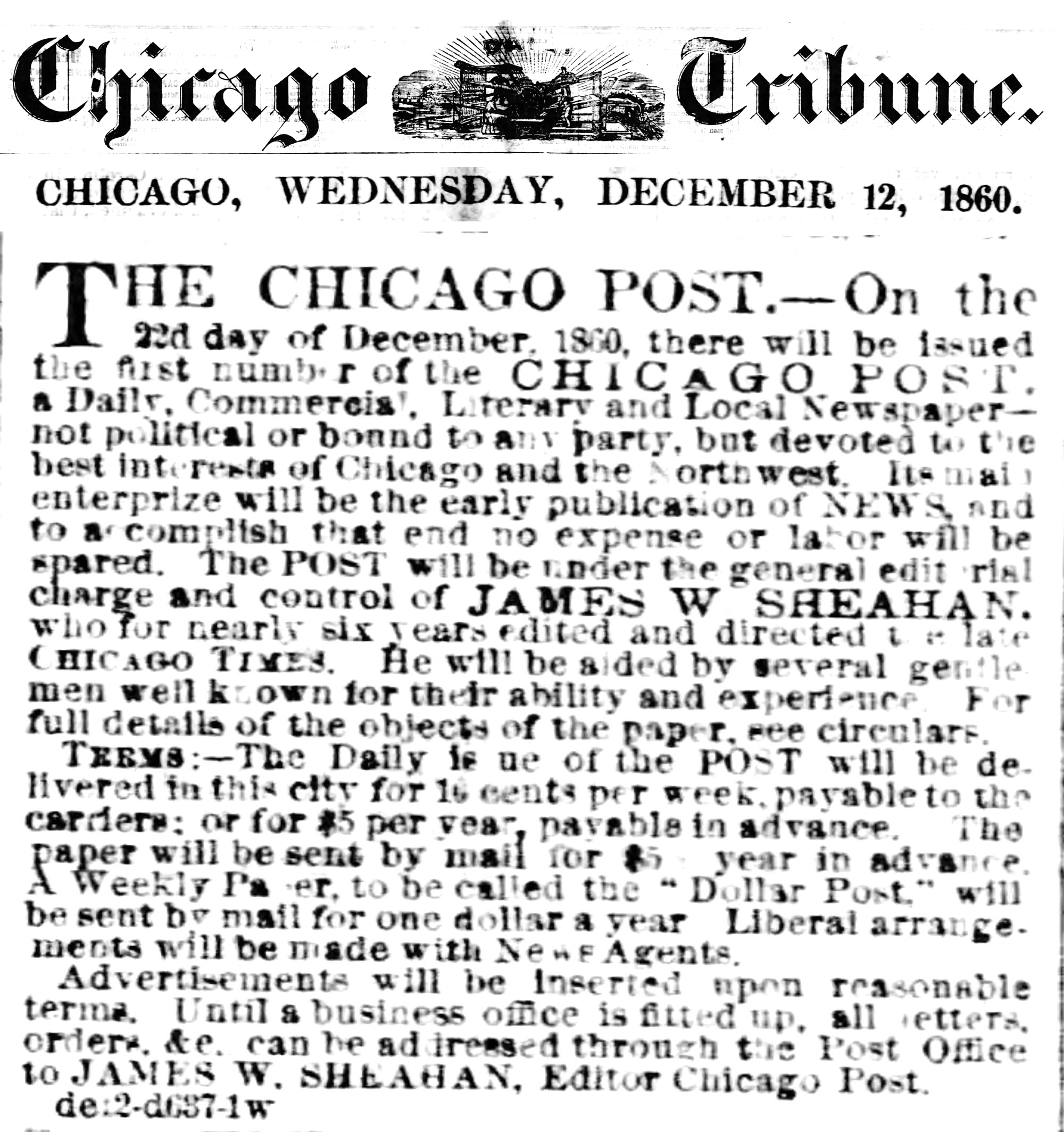 The Times was founded in 1854 by James W. Sheahan, with the backing of Democrat and attorney Stephen A. Douglas, and was identified as a pro-slavery newspaper. In 1861, after the paper was purchased by Democratic journalist Wilbur F. Storey, the Times began espousing the Copperhead point of view, supporting Southern Democrats and denouncing the policies of Abraham Lincoln. During the Civil War, General Ambrose Burnside, head of the Department of the Ohio, suppressed the paper in 1863 because of its hostility to the Union cause, but Lincoln lifted the ban when he received word of it.

Storey and Joseph Medill, editor of the Republican-leaning Chicago Tribune, maintained a strong rivalry for some time. In 1888, the newspaper saw the brief addition of Finley Peter Dunne to its staff. Dunne was a columnist whose Mr. Dooley satires won him national recognition. After just one year, Dunne left the Times to work for the rival Chicago Tribune.

In 1895, the Times became the Chicago Times-Herald after a merger with the Chicago Herald, a newspaper founded in 1881 by James W. Scott. After Scott’s sudden death in the weeks following the merger, H. H. Kohlsaat took over the new paper. He changed its direction from a “democratic” publication to an “independent republican” one. It supported “sound money” policies (against free silver) in the 1896 election.

Kohlsaat bought the Chicago Record from Chicago Daily News publisher Victor F. Lawson in 1901 and merged it with the Times-Herald to form the Chicago Record-Herald. Frank B. Noyes acquired an interest in the new newspaper at the time and served as publisher, with Kohlsaat as editor. 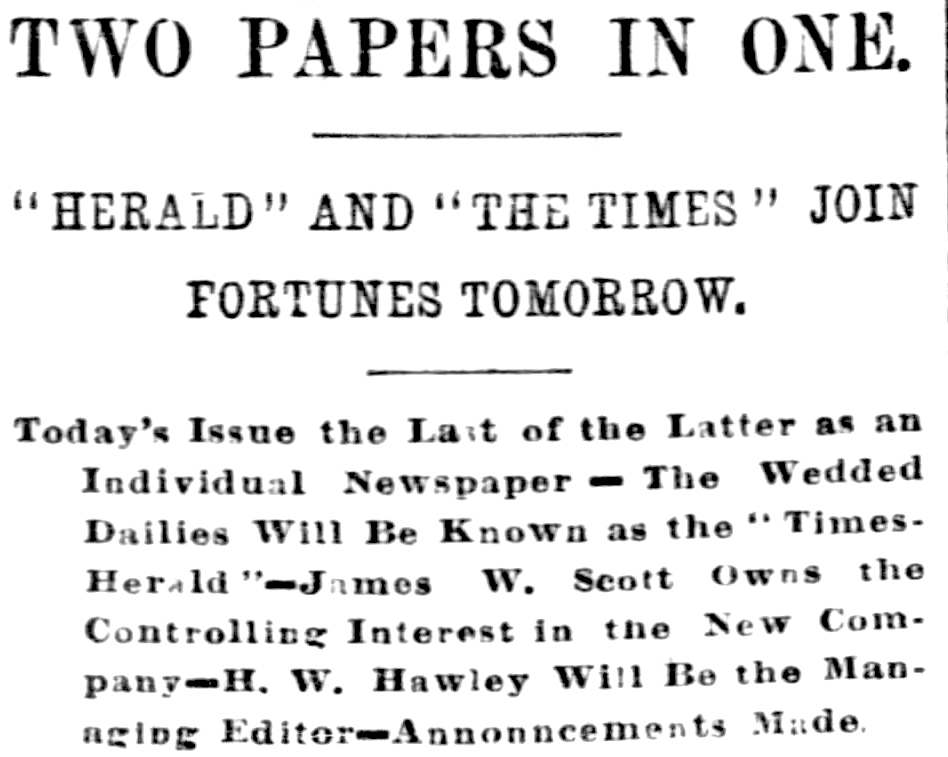 The consolidated paper is owned and will be published by the Herald company, of which James W. Scott is the majority stockholder. The company is capitalized at $1,000,000. Its assets comprises the good will, plants and buildings of the Chicago Herald and Chicago Evening Post, and also the good will and plant and lease of the building which will be vacated today by the Times. On the Herald Building there are $600,000 of ten-year bonds outstanding, while on the Post are bonds for $150,000, held by John R. Walsh, formerly owner of the Herald and the Post.

The Times has been published by the Newspaper company, which is capitalized at $500,000. The stock of this company has been bought by the Herald company and Mr. Scott has been elected its President. It is said that the consolidation was about $260,000 in stock of the consolidated papers, Adolf Kraus, who has been in control of the Newspaper company and the Times for some time, disposed of the control several weeks ago to H.W. Hawley, lately of the Denver Times, and with Mr. Hawley Mr. Scott conducted his negotiations.

Mr. Scott will dictate the policy of the consolidated papers. He will be at once editor-in-chief and head of the business department of the paper. Mr. Hawley, the largest minority stockholder in the Herald company, becomes managing editor of the consolidated papers. He will be in active control of the editorial end. Horatio W. Seymour, who has been managing editor of the Herald since 1887, retires, and will spend the next few months in rest and recuperation. With Mr. Hawley there come to the Times-Herald the staff of the Times twelve or fourteen men, most of whom have occupied editorial positions. Mr. Scott said yesterday that there would be no changes in the heads of departments on the Herald’s editorial staff, though adnitting minor changes were not improbable.Robert Ainslee, the present business manager of the Herald, will remain in the same position on the Times-Herald.

Mr. Scott contradicted rumors to the effect that the price of the Evening Post was to be reduced to one cent, and its publication to the Herald Building. He said the Post will remain in its present building, and that there would be no changes of any consequence in either its editorial or business ends. The Post will be in no way connected with the Herald except that it will be owned by the same company.

This morning after the last edition of Times had gone to press the compositors employed on the paper were entertained in lunch by Adolf Kraus, the retiring proprietor. Monday night will give a banquet to the members of his editorial staff.

The Times this morning will print the following valedictory editorial:

With some regrets I relinquish the editorship of the Times. Although I have been in charge of its policy for only a few months, yet I began to love the Times with some of the love a parent bears for his child. Today it is still under my care; tonight it will leave me in order to wed the young and sprightly Herald and to travel with it henceforth, joined in lawful wedlock, more powerful and influential than ever, and to henceforth known as the Times-Herald.

To the advertisers and subscribers who have honored the Times with their patronage I express my heartfelt thanks. In parting it is due the press of Chicago, particularly the morning papers, to say that the Times was rapidly becoming a very dangerous rival to them, yet they treated the Times and its editor with marked kindness and consideration.

James W. Scott will be in charge of the Times-Herald, aided by H.W. Hawley, who, up to now, has been part owner of the Times. Each of these gentlemen merits the confidence of the community. They will be engaged in no other business; they will have no other interests to serve; they will be free to conduct a newspaper in the full sense of the word. The publisher of a newspaper should not permit any personal feeling or any desire for immediate profit to affect his course. A newspaper has become to a limited extent the educator of mankind; it should always be just and truthful; it should stand for good government, uphold the law, discountenance all lawbreakers, be they rioters, corrupt officials, or other criminals, regardless of their number or standing. It should speak for the common people, for the wage-earners, for the country can prosper only in proportion to the prosperity of its laboring classes. But in demanding the rights of the laboring people it should never forget that capital has its rights and must go hand in hand with labor. While it is enjoying the liberties of a free press it should never abuse them. If a party organ it should not denounce rival candidates simply because they are nominees of the opposition party. It should always speak for the common welfare, never for private gain. It should be clean, not prudish; yet it should avoid sensational articles which can no other object than to shock a cultured mind.

I believe the Times-Herald will be an instrument for good in this community, and I ask for it the support of my friends and the public. It will surely deserve at least a fair trial by those who prior hereto have not been subscribers of either the Times or the Herald.

With this day my brief journalistic career ends. If I could but feel that those who have been readers of the Times believe that I have made an honest attempt to make of the Times such a newspaper as I have above described, such feeling would to me be of much higher value than any financial consideration which may arise to me out of this transaction.
ADOLF KRAUS 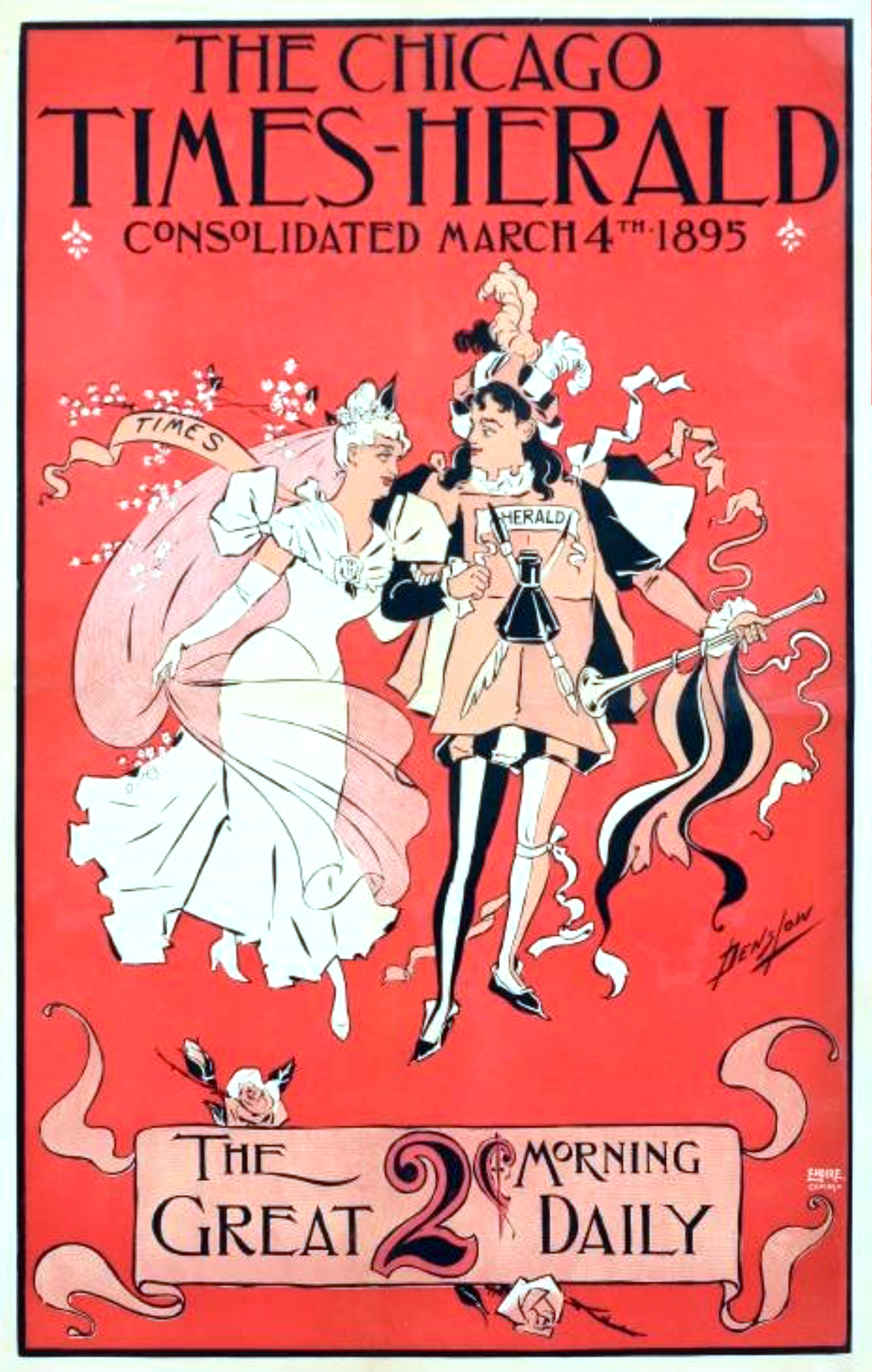 The Herald this morning makes the following announcement of the consolidation:

The Chicago Times has been purchased by the Chicago Herald company and will appear for the last time this morning. Tomorrow morning the Chicago Tomes-Herald will be issued from the Herald Building.

The Times-herald, the product of the combined capital and energies of two of the foremost Chicago dailies, will be the great Democratic newspaper of the West, with a wide field and the ability and the purpose to occupy that field to the entire satisfaction of all adherents to the cause of Democracy. The joint circulation of the two newspapers, extending as it will through all of the States and Territories of the West, will give the Times-Herald a prestige which will not be underestimated.

The Chicago Times has been an institution, even a landmark, of the west for forty years. Under one of its proprietors it gained great celebrity, both as a newspaper and as a journal of opinion. Then, falling into a temporary decline, it was eventually restored by Adolf Kraus to its old-time enterprise and vigor. Owing to his sagacious direction the Times has recently gained handsomely in circulation and advertising patronage, and its consolidation with the Herald brings under one management two publications of undoubted prosperity and character. After a very creditable career as editor Mr. Kraus retires from journalism to reengage in the practice of law, a profession which he has long adorned.

H.W> Hawley, who has been associated with Mr. Kraus and was formerly of the Denver Times, comes to the Times-Herald as managing editor. His very gratifying successes in other fields, as well as his recognized ability as a practical journalist and man of affairs, will be accepted as assurance of his connection with the Times-Herald.

The control of the policy and the conduct of the paper, as well as of the majority of the stock, will remain in the hands of James W. Scott.