The Times Building I
Life Span: 1867-1871
Location: SW Corner of Dearborn and Calhoun Place, between Washington and MadisonStreets
Architect:

“It is a newspaper’s duty to print the news and raise hell”—Wilbur F. Storey, The Chicago Times, 1861

In 1867 the Times had been removed to the new marble front building on Dearborn Street, on the west side, and on the northwest corner of the alley between Madison and Washington Streets. The editor knew nothing of building material or prices, and was shockingly swindled in the erection of the new structure. Its hallways were narrow, its floor-joists and partitions weak, and the probabilities are that, had it not, a few years later, burned down, it would, in time, have tumbled into the basement from disintegration. 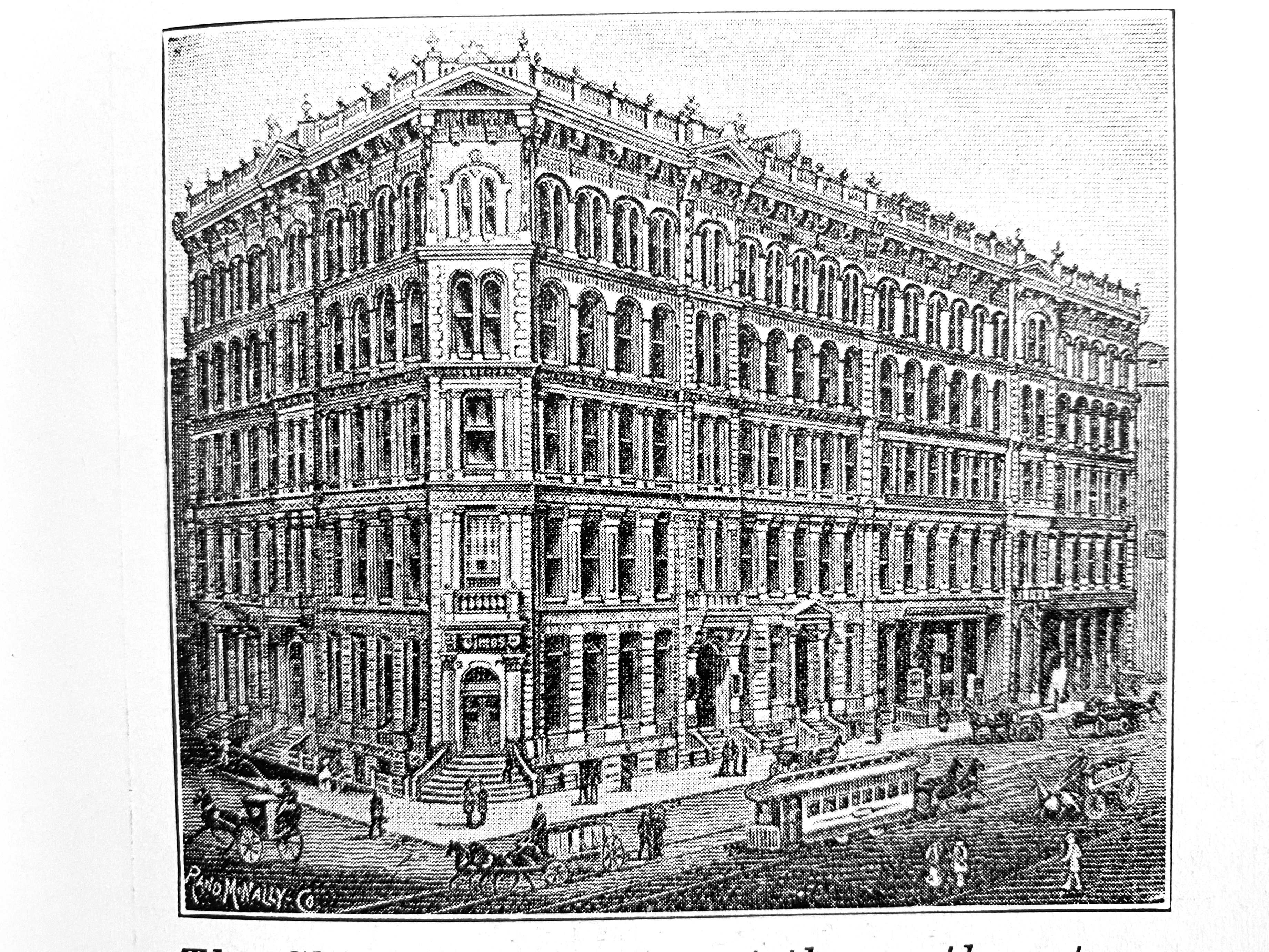 The Chicago Times Building I
1869

The Times1 was founded in 1854 by Isaac Cook, James Sheahan1 and David Cameron. Mr. Sheahan conducted it until the summer of 1860 when it was purchased by Cyrus H. McCormick, who was also the owner of the Herald. The Herald had been founded in 1858, to represent the Buchanan, or administration, democracy. Mr. McCormick consolidated the two papers under the name of the Herald and Times, intending eventually to drop the name Times.

He placed E. W. McComas in editorial charge, a journalist from Virginia, and the paper then became an exponent of Southern democracy. The paper was then published in the fifth story of the McCormick Block, on the corner of Randolph and Dearborn streets. The circulation was but little over one thousand, with no advertising patronage worth mentioning. In a very short time these quarters were found to be too small, and a removal was made to No. 74 Randolph Street, and the paper began to assume the enterprise and audacity which were henceforth to be its chief characteristics.

The close of the war found the Times one of the most prosperous newspapers in the city, and it was compelled to enlarge its quarters and press facilities. In 1866, a new building with a stone front was erected on the southwest corner of Dearborn Street and Calhoun Place. It was five stories in height, and intended expressly for the Times.

It was the main life-work of one man, and in no particular can it be disjoined from him. However the Great Fire of 1871 burned the building and paralyzed the publication.

The Times I Building
SW Corner of Dearborn and Calhoun Place, between Washington and MadisonStreets
1871