The W.D. Boyce building will be of a peculiar design to conform to the size of the lot it will occupy. The negotiations, which are now under way for subleasing the Stewart-Bentley property will not affect the building, as Mr. Boyce will stipulate that the building be erected after the plans now adopted. 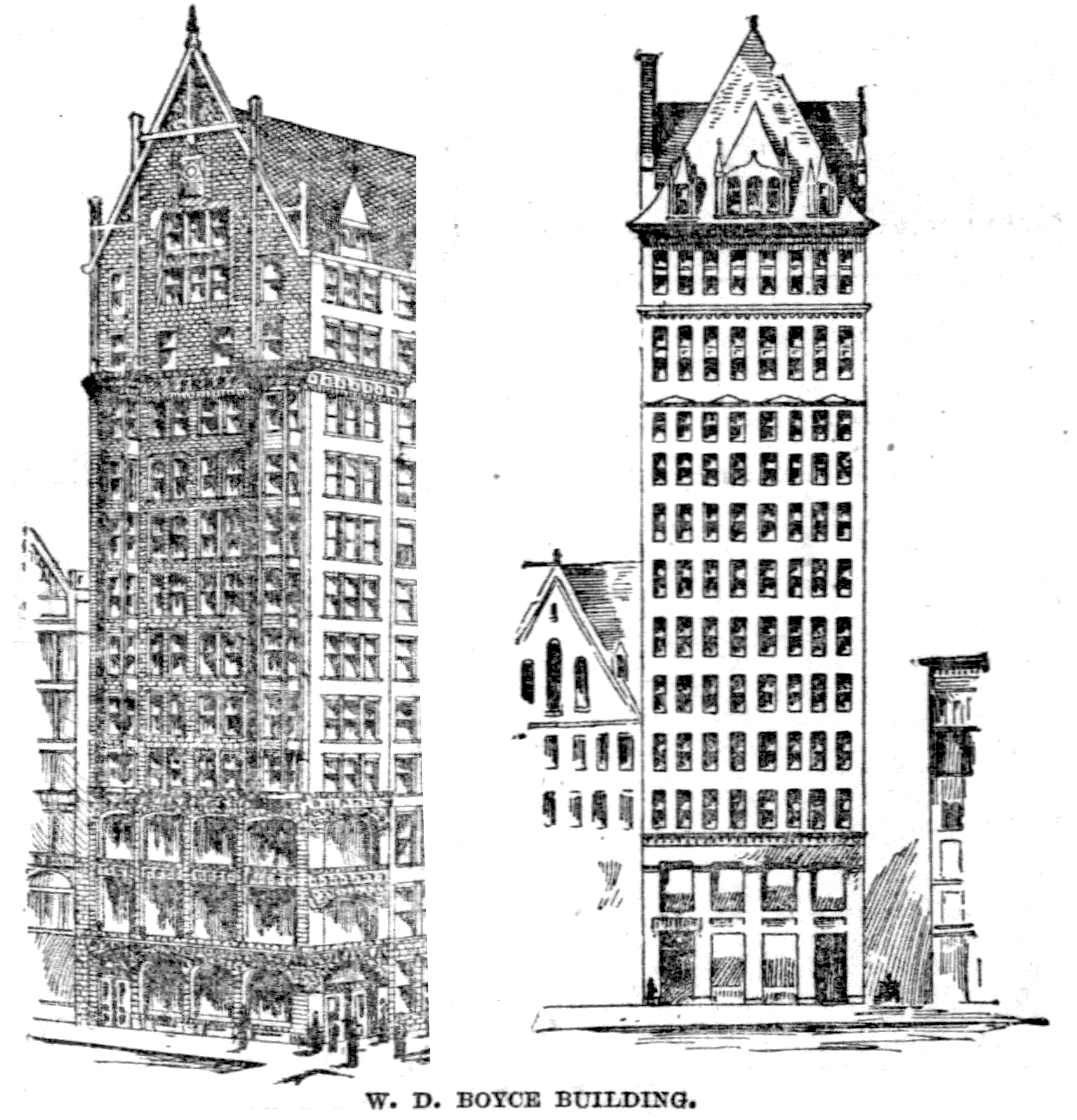 Boyce Building.—This is located at 112, 114 Dearborn St. It is 40 ft. 8 ins. front by 90 ft. deep; is 160 ft. high, with basement, 12 floors and an attic, and has about 39,000 sq. ft. of renting area. The main design is gothic, with steel and fireproof construction. The building is for office purposes, with stores on the first floor, and has compartment vaults on each floor for the use of tenants hiring offices without vaults. There are three elevators, and the usual equipment of steam heating, electric lighting, etc. Architect, Henry Ives Cobb. Contractor, C. Everett Clark.

The headquarters of the Chicago Times are to be moved from Fifth avenue to Dearborn street. The northwest corner of Fifth avenue and Washington street, which has been identified with the paper for years will be vacated. A lease of the main floor of the Boyce Building has been made by the Harrison Brothers and this office is being fitted up for immediate occupancy/ The Boyce Building is the new thirteen-story building which adjoins the University Club Building on the north. At the time the building was in construction it was understood that the first floor would be taken by the Market National Bank. There was some delay completing the building and the Market National Bank made a lease of a portion of the banking floor of the Major Block. The Boyce Building is forty feet in width and ninety feet deep. The first floor, with exception of an entrance hall, is in one large room.

At the office of the agent of the building, A.C. Gehr, it was said that two-fifths of the first floor had been secured by the proprietors of the Times for a branch office. Mr. Boyce, the owner of the building, is now in New York. The present Times corner is owned by the Blodgetts, of Grand Rapids, Mich. A lease is now in force running until May 1. Up to that time the tenancy of the building will remain unchanged. May 1 the building will be entirely remodeled and brought up to the standard of a modern office builsing. It has been known for a long time that the representatives of the Blodgett estate and the Harrison brothers had failed to come to terms for a new lease, and that the Times was on the lookout for a new location. Promising negotiations were carried on for some time with the owner of the building and leasehold of the southeast coner of Fifth avenue and Calhoun place. The small size lot was a serious drawback, however, and the deal was finally declared off. It appears that the problem has been solved by a lease of quarters in the Boyce building.

The agents of the building are not inclined to discuss the lease in any form. It is intimated, however, that the offices and composing-rooms will be secured on the upper floors and that the front portion of the basement will be used for press-rooms. In addition to the Boyce Building property Mr. Boyce controls the building known a No. 5 Calhoun place, or more familiarly known as “Billy Boyle’s Chop-House.” One agent who is somewhat interested in the change advanced the theory that the Times press-rooms would be located in this building building and that the chop-house would be moved into the rear of the Boyce and University Buildings. Mr. Boyle said last night that he held an eight-year lease of the Calhoun place building and had not been consulted in the matter. The main floor of the Dearborn street building can be fitted up for occupancy in a short time, and the agents of the building expect that a change of the newspaper office at least will be made at once. 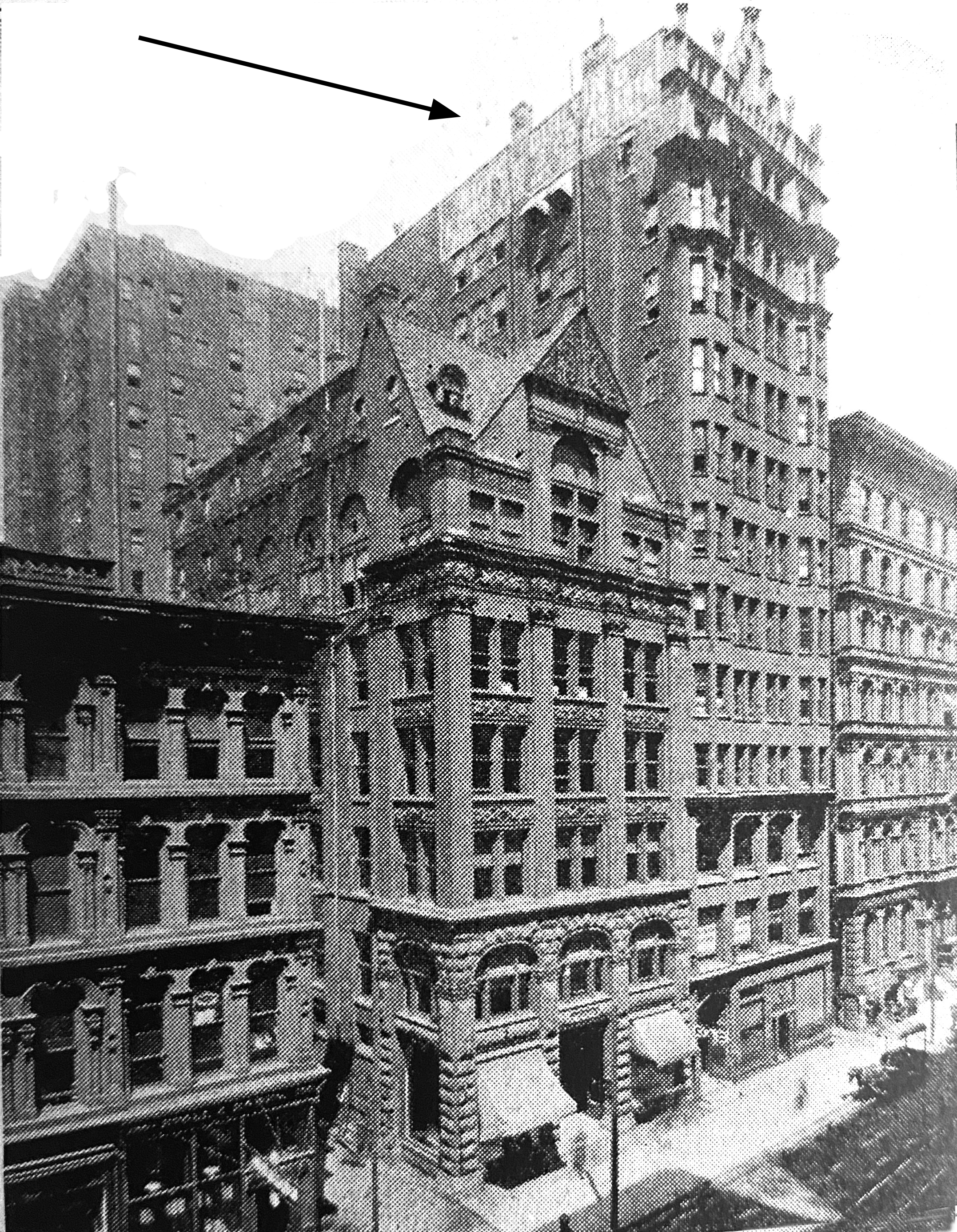 The Boyce Building
About 1910 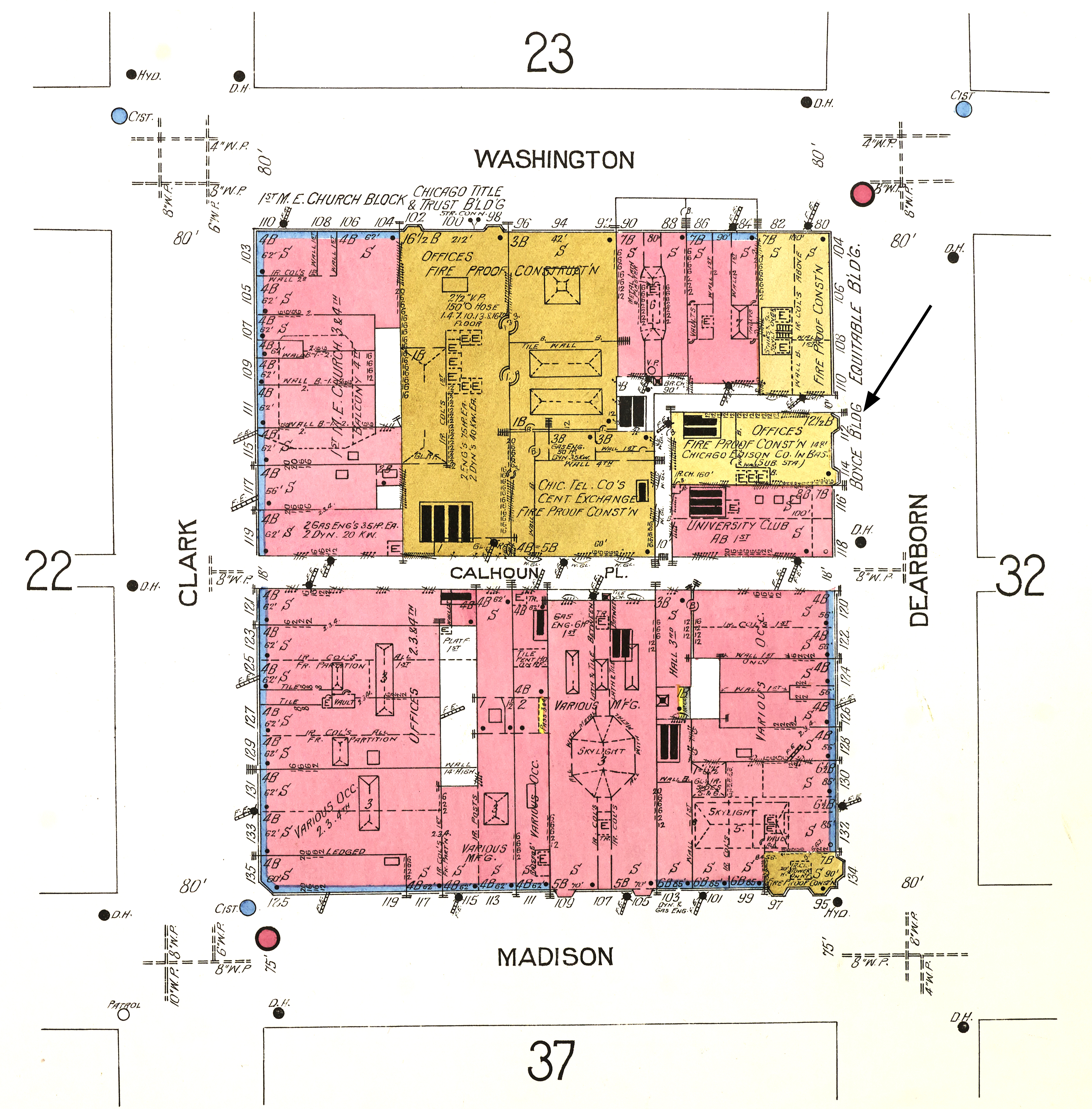