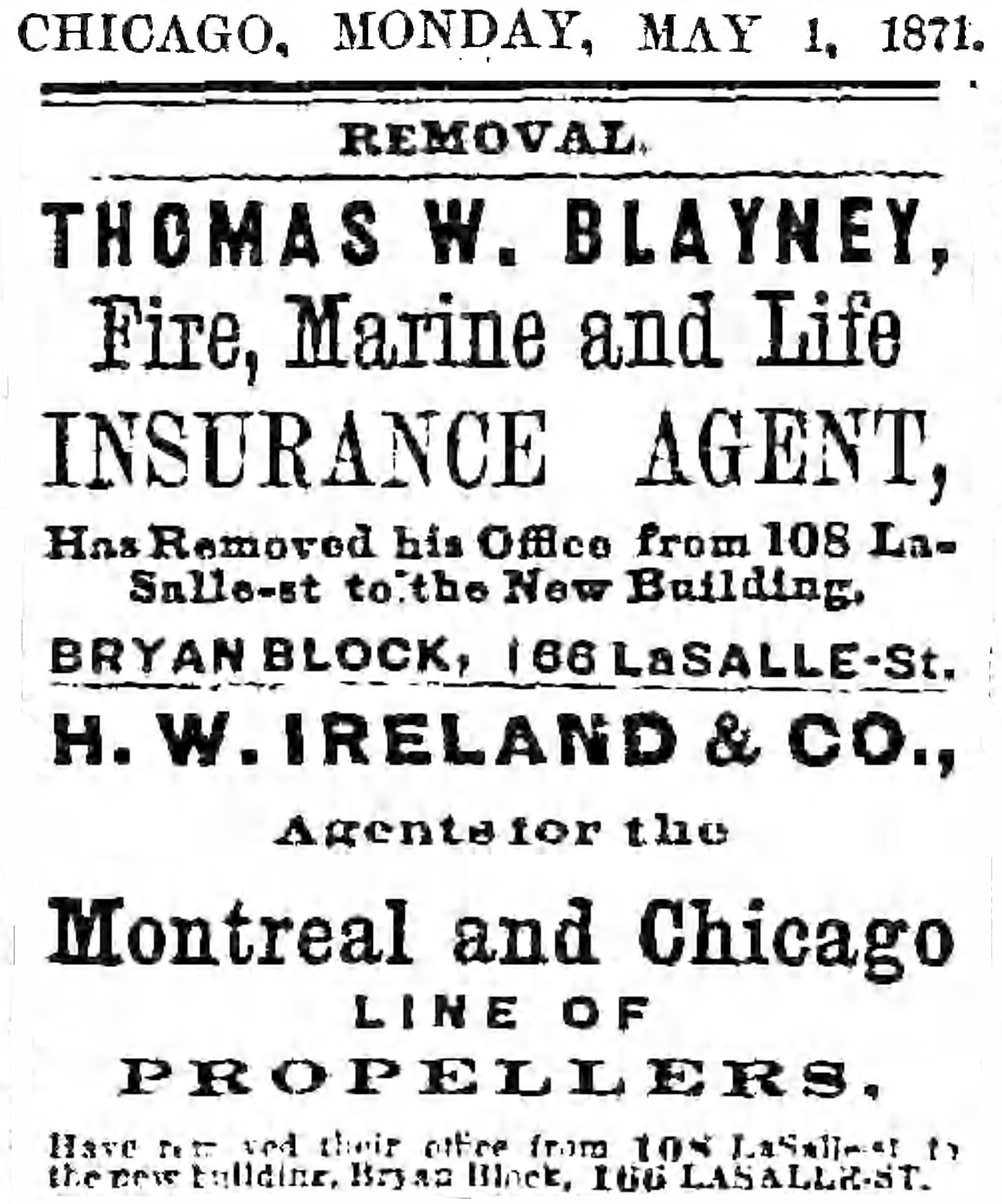 The second Bryan Block, designed by architects F. & E. Baumann, was built shortly after the fire and was among the first new projects to be cited as proof of the revival of Chicago. Fronts 190 feet on LaSalle street and 50 feet on Monroe., on the northwest corner. It is 55 feet high with 4 stories and a basement. It was a stone front of 1873, containing 6 stores, 95 offices, and one elevator, and was devoted principally to real estate and insurance.

As the signs on the Bryan Block indicate, its primary tenants were the real estate and insurance agents who were helping turn this part of downtown into its major financial district, especially once the Board of Trade constructed its headquarters two blocks to the south in the mid-1880s. Since 1905 the site of the Bryan Block has been occupied by the Northern Trust banking firm.

THE NEW BRYAN BLOCK—THE OFFICE OF THE NEW YORK LIFE INSURANCE COMPANY.
Everybody remembers that splendid business palace, the Bryan Block, at the northwest corner of Lasalle and Monroe streets, completed only a few months befiore the fire, by D. Bryan, an old resident of Chicago. Our engraving shows that it has risen again, more handsome than before. It is constructed in the same general plans, but experience dictated some minor improvements, which have been made. The architects are Messrs. F. & E. Baumann.

This structure is one of the most elegant and costly in our new Chicago. It has been put up in an incredibly short space of time, the last story-cornice and roof being put on as we write. It is splendidly lighted, and every office is provided with a vault. Its location renders it an extremely valuable piece of property, and it will bring a high rental, although the prices are not high considering the scarcity of supply in the rent market. Dr. Bryan, having done business in Chicago for thirty years, it will be seen, did not have his faith in the city weakened by the great conflagration. 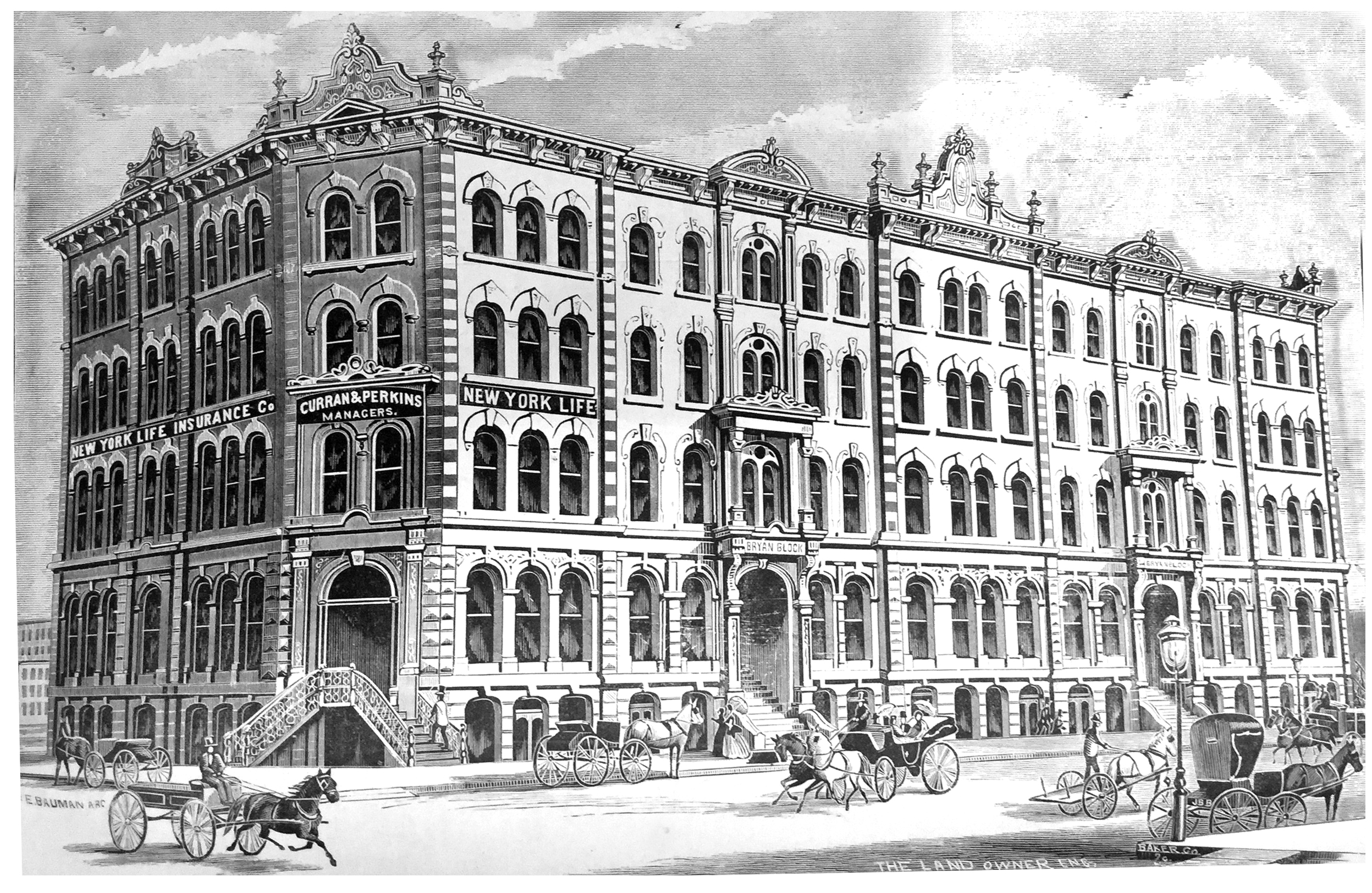 THE NEW YORK LIFE INSURANCE CO.
Our illustration of this block shows thye elegant offices to be occupied on May 1st, by the New York Life Insurance Co., O. P. Curran, Esq., Manager. This is perhaps the strongest and most thoroughly popular insurance company in America. Its building in New York is one of the most elaborate and substantial edifices in that city, and its Chicago office will be in keeping with it. As the illustration shows, it will occupy the second story suite, fronting both Lasalle and Monroe streets, which will be fitted up in a tasty and comfortable manner, having everything requisite to the transaction of its large and increasing western business. 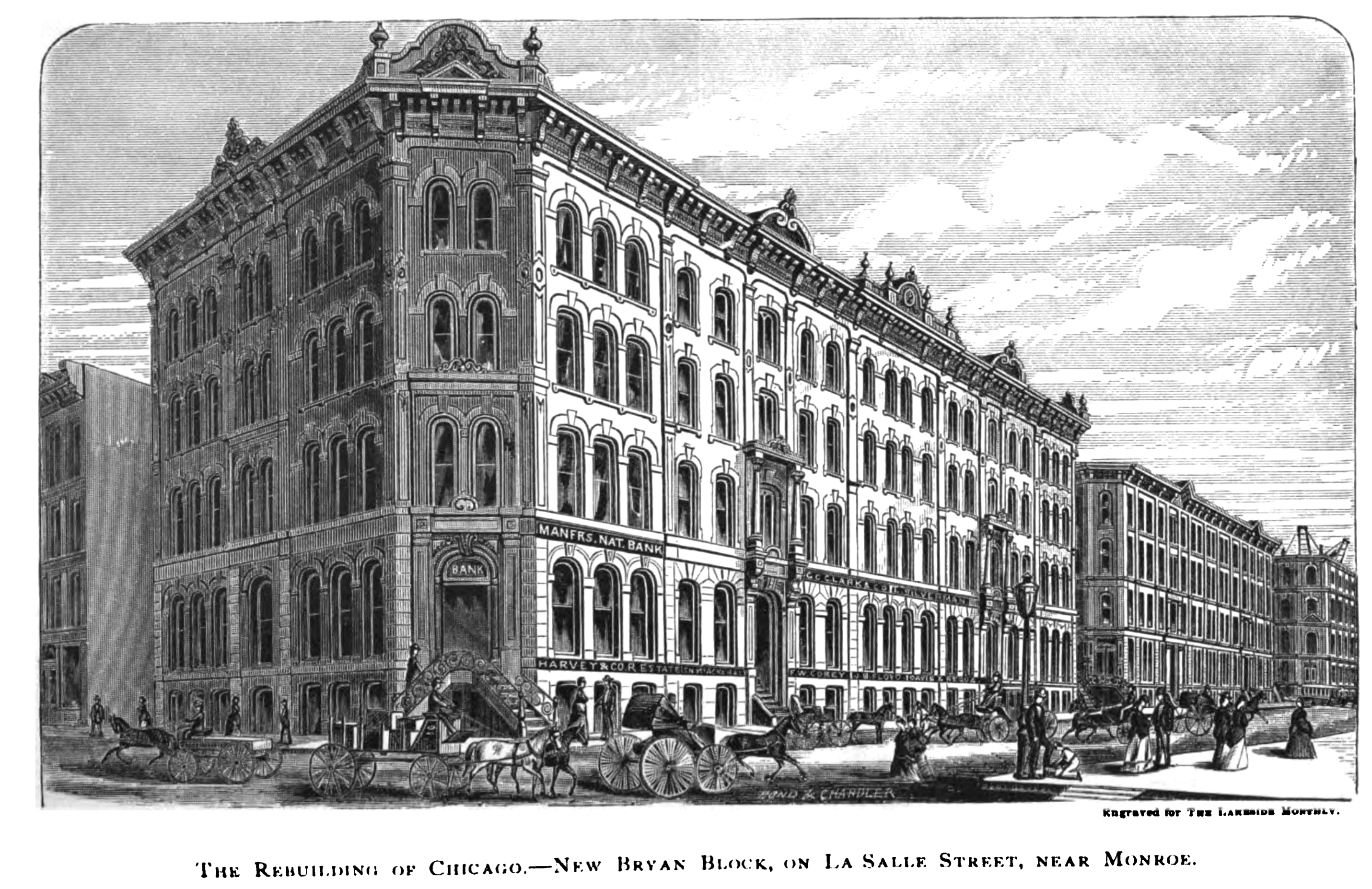 The Manufacturers’ National, before the fire at the corner of Washington and Dearborn streets, was at No. 454 Wabash avenue while waiting for its present office in Bryan Block, at the southwest corner of LaSalle and Monroe streets. The rent is $5,000 per annum.

Lazarus Silverman’s Bank, formerly at the corner of LaSalle and Randolph streets, moved after the fire to No. 62 Wabash avenue, and is now in Bryan Block, Nos. 164 and 166 LaSalle street. There are two double offices for which $2,250 a year is paid.

The National Bank of Illinois is also in Bryan Block, at No. 160 LaSalle street. This institution was before the fire on Washington street, between Clark and Dearborn, and removed temporarily to 14 West Randolph street and No.703 Michigan avenue. The present location will be permitted. The rent is $3,500 a year. 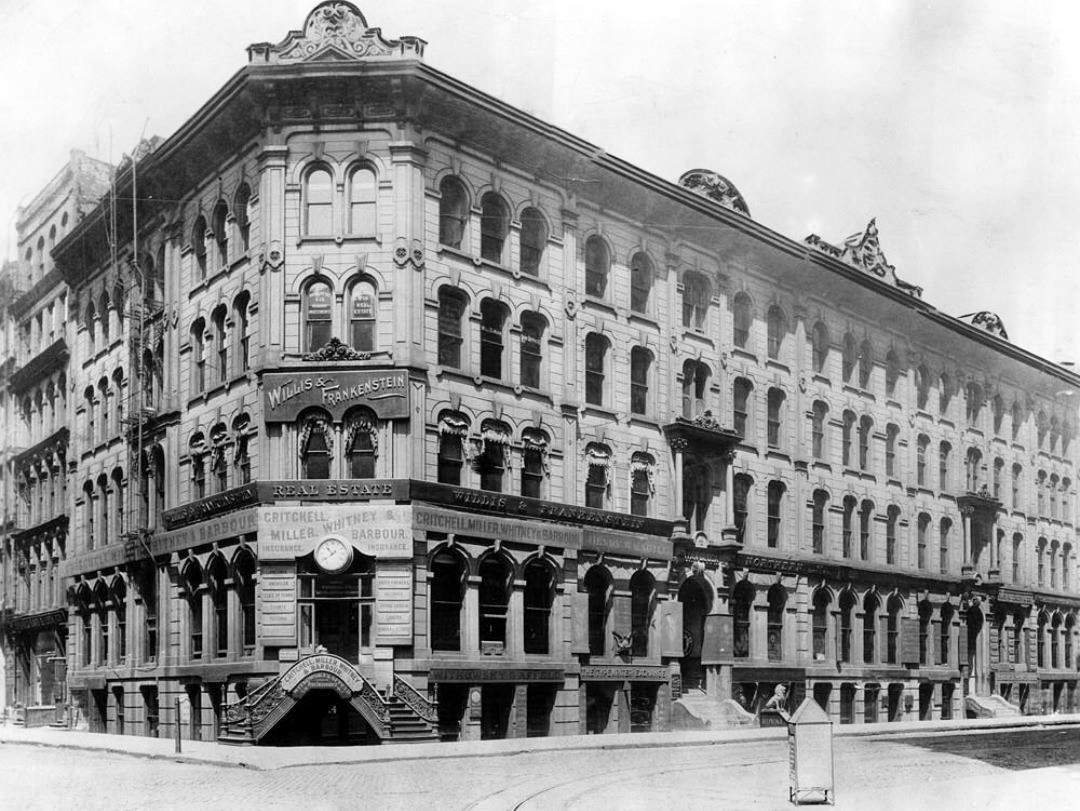 The Bryan Block, a five story building at La Salle and Monroe streets, has begun to disappear below the ground. The structure for years has been a landmark around “change.” When it new the idea of its ever sinking into the ground would have been put down as a wild fantasy. As soon as the building has disappeared a new one will rise as mysteriously. It will be the Northern Trust company’s bank, of steel, fireproof construction.

The Illinois Tunnel company’s service has made this innovation in building wrecking and construction possible. Many persons who have stopped to see the old structure disappear have wondered where it has gone. They have seen no wagons hauling away the debris. The building evidently has gone down like a sinking ship. In its place the foundations of the new structure will seem to “grow” out of the ground.

“We may extend our work,” said President Wheeler of the tunnel company, to include several other buildings Clark and La Salle streets that are to be removed to make way for better ones. Although the steel girders cannot be carried through the subterranean passageways, it is practicable to haul the foundation material through the tunnel, and to remove the dirt that is dug out. In time it may be possible for us to destroy and erect buildings in the loop district, doing all the work from underground.” 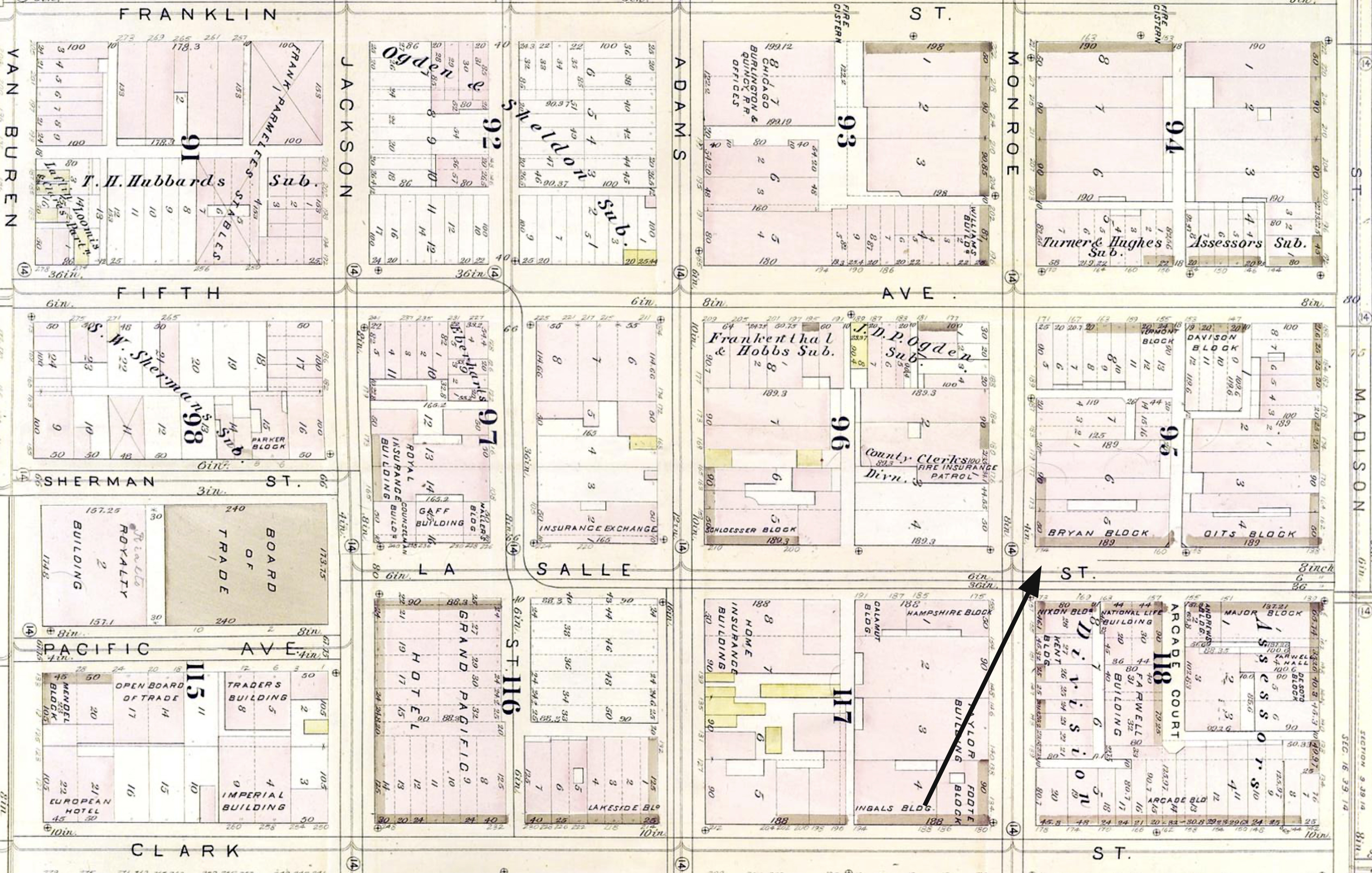