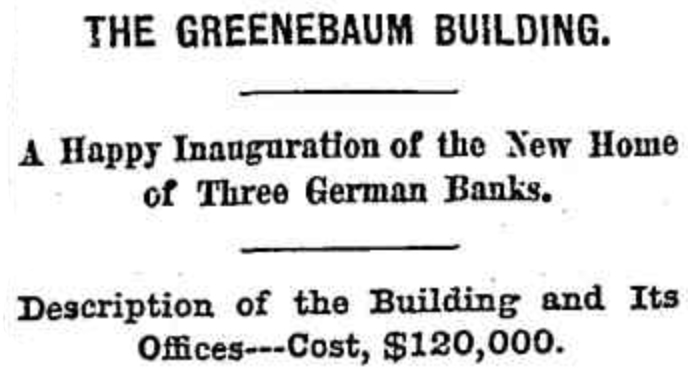 The opening of the new Greenebann Building, on Fifth avenue, between Washington and Randolph streets, was inaugurated yesterday afternoon, by a select party of the most prominent business men of the city, invited by Mr. Henry Greenbaum. Among those present were the Hon. Thomas Hoyne. the Hon. William Bross, Mr. Peter Schuttler, Mr. A C. Hising, Mr B. G. Caulfield. Mr. Fred Letz, Mr. Franz Arnold, Judge Van Buren, Mr. Henry Leopold, Mr. D. S. Greenebaum, Mr. John A. Huck, Mr. Isaac Greenebaum, Mr. H. Austrian, Mr. L. I. Gage, of the First National Bank, Mr. J. Irving Pearce and Mr. L. V. Parsons, of the Third National Bank, Mr. W. H. rark, of the Bank of Chicago, Mr. Elias Greenebaum, Mr. Charles Hearotin, of the Merchants Loan and Trust Company, Mr. Michael Greenebaum, Mr. Richardson, of the Bank of Montreal, Mr. James Warrack, Mr. W. S. Walker, and Mr. Nelsou Morris. Before sitting down, or rather standing up, to the very elegant cold luch set in one of the main offices of the bank, the party roamed around the building and examined its many excellences. The general ornamentation and woodwork seemed to be most admired. The latter is of massive black walnut, inlaid with rosewood, birds-eye maple, and enamel, and decorated with gilt scroll. When the lunch had been disposed of, and the wine commenced to flow, the guests began to give expression to their opinions. Mr. Henry Greenebaum said a few of introduction to the toast “The, City of Chicago,” which brought out the Hon. Thomas Hoyne in a few neat extempore remarks, complimentary to the city and to Mr. Greenebaum, one of its representative men of business. Mr. Hoyne was followed by Governor Broes, Mr A. C. Hesing Mr. Pierce, Mr. Parks, Mr. Arnold Mlr. Cauflieold, Judge Van Buren, Mr. Walker, and Mr. Cooke, all of whom spoke in high terms of the Greenebamm family and its elevated position in the community. These were to by the several members of the famiy present. The inauguration, if it can be so called, was continued until a late hour in the evening.

The many excellences of the Greenebaum building are worthy of a detailed examination. First of all, its very location—in the van of the westward movement of our banking institutions inaugurated by the fire—midway between the new and the old quarters of our wholesale trade, easy of access of the business men as well as to the artisans to South, West, and North Divisions—in close proximity to the offices of two great newspapers, the Chamber of Commerce, Court House, and the telegraph offices—it was a master-stroke of policy to locate this building in its present site.

The size of the building Is 80×80 feet on the ground. It is a high basement building, four stories high above tho . The two most prominent characteristics of the building are its solidity and the convenience of its arrangements for the public as well as for other occupants. It is built of Buena Vista and Amherst sandstone, in a modernized modification of the Bomanesque style; the basement characterized by heavy massive square piers, the first story by large columns, with carved capitals, carrying rich molded arches with carved spandrels. The upper stories have openings with deep molded reveals, the front enlivened by heavy pilasters and rich string courses. The entire building is covered by a galvanized iron cornice of unique design.

Its foundations contain more than 6,00 feet of dimension stone, 100 cords of rubble masonry; its massive walls have consumed 1,200,000 bricks, and 8,000 cubic feet of cut stone, It may be imagined that,to consume this quantity Of material, the walls must be of universal thickness. Such is indeed the case. The outside and inside walls of basement are two feet thick, those of first story and the outside walls of second story are twenty inches thick, none of the other walls are less than 16 inches thick. All walls carrying walls are of brick; not a single floor in the building on a wooden partition or supports. The vaults are larger than those of any other building in the city. The combined area of the floors of the various vaults in this building exceed 1,000 feet square. It was on account of its superior vault accommodations that the newly-formed Abstract Company selected the basement of the building for its dwelling place for the next five years. The rooms occupied by the Abstract Company, besides having a vault surface of nearly 250 square feet, offers, splendid light and abundant ventilation.

The main floor of the building , measuring 80×80 feet, is occupied by the German National Bank on the south, the German Savings Bank on the north, and the office of Henry Greenebaum & Co. in the middle, each concern occupying about one-third of the space. In designing these rooms, reference was first had to absolute strength—to see how this has been accomplished, look at the large piers and arches, separating the German National from the ofice of Henry Greenebauin & Co. To attest the convenience of the arrangements for the general public, we can only say try them. There is no other place in the city where so many different kinds of business can be transacted within the compass of one suite of rooms, as on the first floor, of the Greenebatm building.

Nor has the comfort of the employee been left out of sight. A flood of light at every desk—large, light, and well-ventilated cloak, wash-rooms, and water-closets, easy of access from every part of the building. The rooms themselves well warmed in winter and ventilated for summer use, there seems nothing wanting to make them perfect model business quarters. The general elegance and originality of the finish of doors. windows and counters adds to the good impression made by the interior of this floor on the beholder.

The position of the room of Mr. Greenebaum—midway between the various departments of his business and still easy of access to the public—is also of mention, and will cause great saving of time both to himself and to his clients.

While speaking of the excellencies of these apartments, we must not forget the vaults, which contain 300 square feet of floor surface, and which are strengthened, in addition to the unusually heavy arrangement of brick walls and arches, by iron arches, which have consumed fully 36,000 pounds of iron. The lining of the cash vault at the German National Bank, with a solid continuous mass of rolled iron, ten inch “I,” beams, is unapproached by any other vault in the city, except that of the First National Bank. Perhaps there is no better standard whereby to judge of the excellence of work of this description than its cost. The sum paid for the iron and steel linings and the various vault-doors and locks in the building, is $9,000.

Over the rooms of the German National Bank, and connected with it by an iron staircase, are the rooms of the Illinois Mortgage Company covering a surface of 26×80 feet, with a vault lined with iron measuring 7xl9 feet.

Turning from the devoted to the interests of Mr. Greenebaum to those open to the general public, we find that there, too the ideas of solidity, comfort, and elegance been carried out; heavy walls, large vaults, commodions stair ways large, well-lighted corridors and rooms, elegant finish, wash-rooms, water-claosets, steam-heating coils, meet us wherever we turn.

While we have spoken of the heavy masonry of the building, we neglected to mention the unusual strength of the floor-timbering; none of the floor-joist measure less than 3×14, and those of long space are 4×14. All the partitions are supported by heavy rolled iron beams to avoid the consequence of the shrinkage of wooden supports. The floors of the first and second stones, and those of all halls, are of maple. The doors and casings are made in a manner equal to cabinet work.

Unusual care hab been taken with the plumbing work and the tin roof, which were done under the immediate supervision of Mr. Michael Greenebaum, who for many years has been engaged in such business, and who has here expended the results of all his experience in one effort to secure that rara avis, a perfect job of plumbing and roofing. Again applying the money test, we state that nearly $7,500 has been expended on this part of the work. 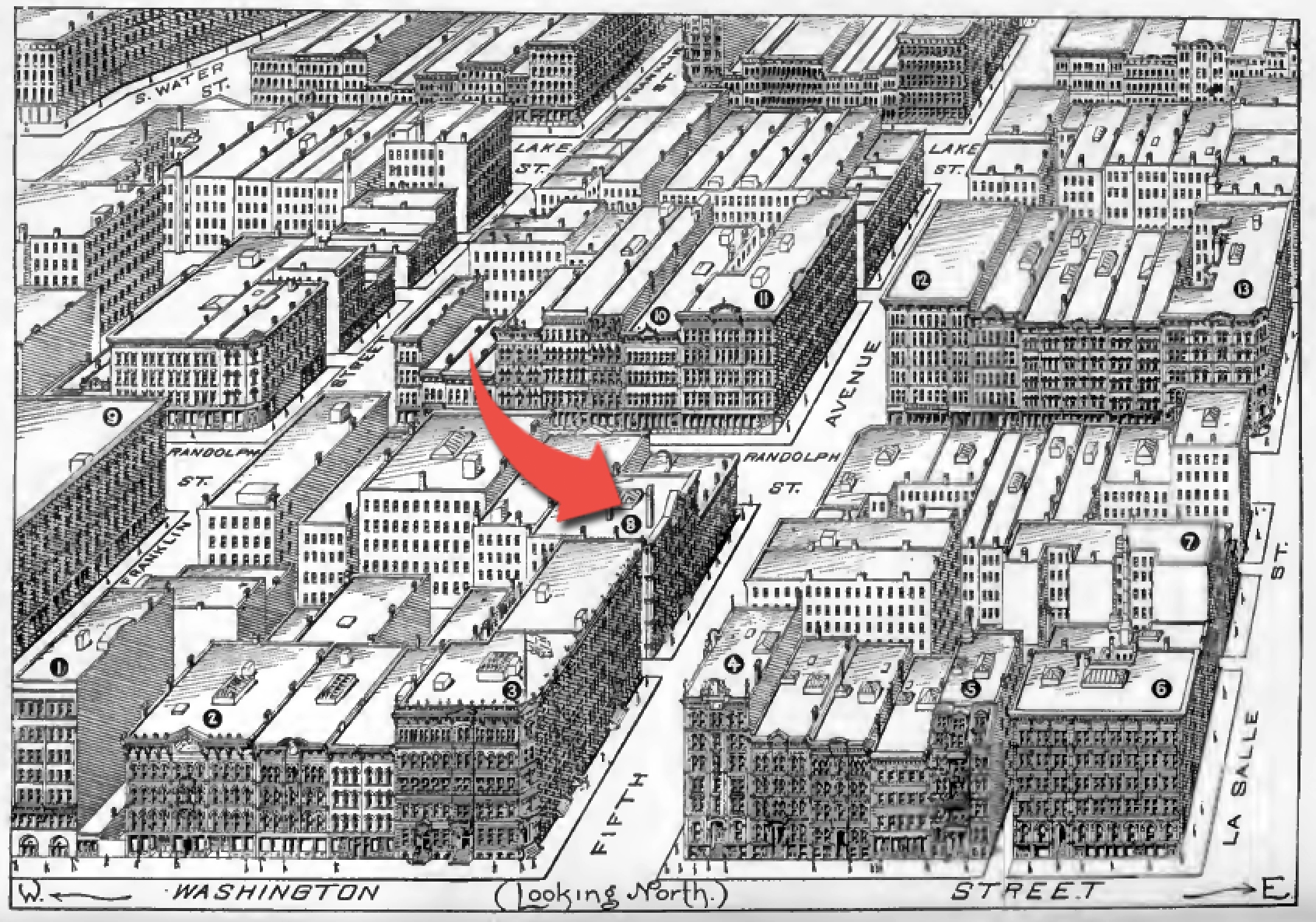 Greenebaum Building
At 76-82 Fifth Avenue, in its early days held the abstract offices. It is now devoted to publishers, printers, and light manufactures, but has a well-known lodge hall above. There are 4 stores and 20 offices; dimensions, 80 feet wide. 100 feet deep, 65 feet high, 4 stories and high basement. It was erected in 1872.