PROGRESS ON THE ASHLAND BLOCK.
Plan for a Giant Struoturo to Be Opposite the Sherman House
The old Ashland Block will soon be a thing of the past, and a now sixteen-story offce building, one of the handsomest of its class, will be erected in its place. B. A. Waller and L. Brodhead have leased the northeast cornet of Randolph and Clark streets from A. J. Alexander for a term of ninety-nine years, and will begin work at once on tne new building .

D. H. Burnham has prepared the plans for the now block. It will have a frontage of 140 feet on Clark street by eighty feet on Randolph street. It will be sixteen stories high, of steel construction, and thoroughly fireproof. The building will be faced with light gray, stone, brick, and terra cotta. The main entrance to the building will be from Clark street and twenty-one feet wide. The windows of the lower stories will be arched at tho third story. From the third story seven bays will extend up through both fronts to the sixteenth story. The building will be surmounted by a full Corinthian cornice. All the exterior details will be classical. The main entrance and the entrance from Randolph street will open on a vestibule which will be with mosaic and finished in marble. Seven elevators will be arranged in a semicircle with a provision for adding two elevators to this service. The building will contain 350 offices above tho tank floor. A light court 28 x 50 feet will extend through the rear of the building. The aim of the projectors is to build an office which shall be first-class in all without any extravagant expense. 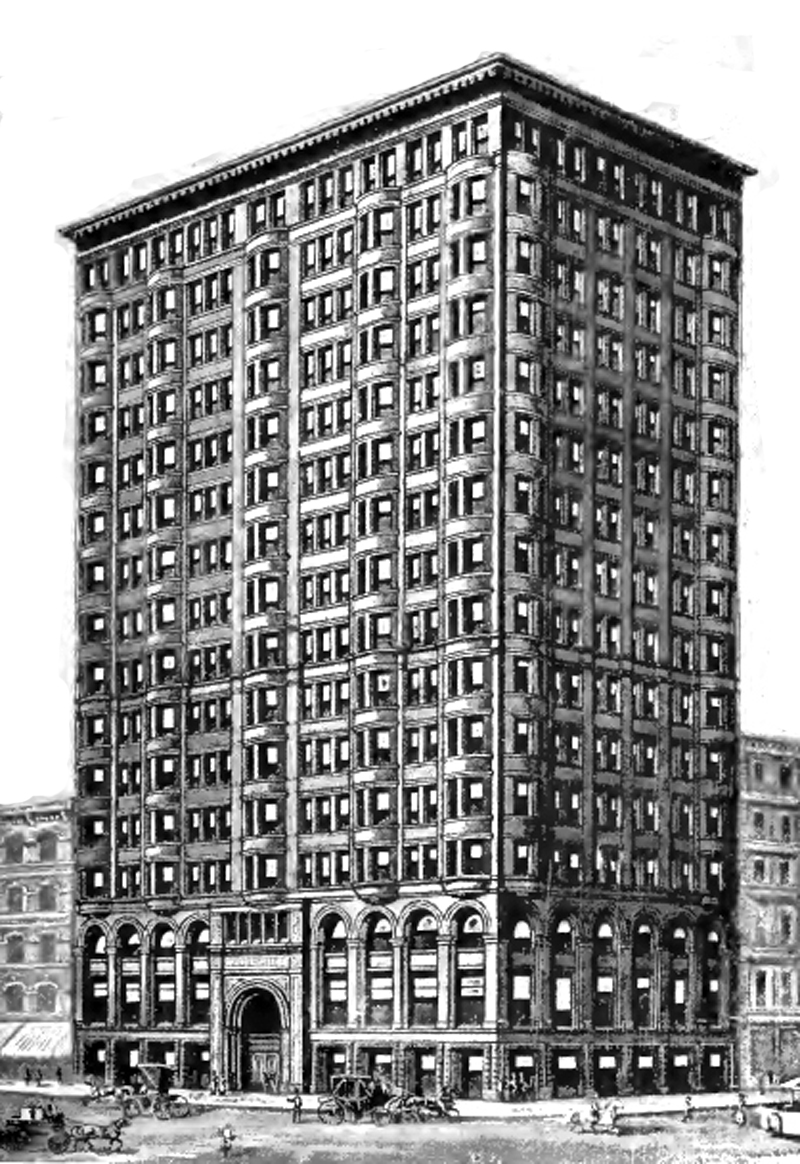 Planned by Architect D. H. Burnham. Property leased from A. G. Alexander, of Louisville, Kentucky, by R. A. Waller, of this city, and L. Broadhead, of Kentucky, for a term of years. This building is sixteen stories high, with a frontage on Clark st. of 140 feet and 80 feet on Randolph st. The exterior is classical. The windows of the lower stories are recessed and end in an arch at the third story. The principal entrance is from Clark st. and is twenty-one feet wide. This extends to a height of two and a half stories and is finished in terra cotta of a delicate design. The first story has eight stores on the Clark st. side and three on Randolph st. The second floor contains several spacious banking rooms 17 feet high and the remaining floors are divided into about 350 offices. Seven elevators are placed in the rear hall of the building. This building was ready for occupancy in May, 1892.

The Ashland Block was an absolutely delightful early skyscraper, a superior design that emerged from the prolific offioe of Burnham & Root. It was a robust structure, a building that reveled in its own height and plasticity. A rich red in color, it was easily recognizable along Clark Street, the thoroughfare it fronted, and it was visible throughout the Loop. This structure was faced with red bnck and red terra-cotta, and its exterior walls undulated. Rounded bays rippled on the street facades and electrified the building’s midsection; it was tri-partite in organization. A grand processional arch marked its main entrance, and a perfectly scaled – yet pronounoed – cornice capped the building. The Ashland Block earned for itself celebrity status due to its overall pleasing appearanoe, lively facades, its relative height of 200 feet, and as one of the progenitors of Chicago’s modern architecture.

This skyscraper was constructed on the northeast corner of North Clark and West Randolph Streets, just across from the Court House, a grand structure filled with city, county, and state offices, and of course court rooms and jails. Business days found the Ashland Block housing over 1,000 occupants including attorneys, bankers, bondsmen, real estate investors, insurance men, and stock brokers. The proximity to the Chicago Court House was most important to many of the Block’s clients, and in turn to their clients.

Is at the northeast corner of Clark and Randolph streets. It was erected in 1892 at a cost of $850,000, and supplanted a block as high, and nearly as large, as the Sherman House. In the old Ashland Block, Charles J. Guiteau had his office, and the Chicago Tribune and Rand & McNally did business on this lot at 51 Clark Street, touching the alley. The new Ashland Block occupies 140 feet on Clark Street and 80 on Randolph. It is 200 feet high, with 16 stories and basement. It is all steel, with terra-cotta coverings and fire-proofing. Its 7 elevators serve 480 offices, 9 stores, and over 1,000 occupants. These are largely attorneys, brokers, real-estate dealers, bankers, and financial agents.

The Ashland Block was destroyed in 1949 and replaced, astonishingly, by an architecturally mediocre bus station. Mercifully, that was raised for the Chicago Title & Trust Center (Kohn Pedersen Fox, New York City) which currently occupies the site. Completed in 1992, one century after Burnham & Roots Ashland Block, the Chicago Title & Trust’s headquarters offers stark contrast to the previous wavy-walled landmark. Chicago Title’s tower stands fifty stories, 756 feet above the corner of Clark and Randolph – almost four times the height of its red brick predecessor.

Clarence Darrow had offices in this building for many years. 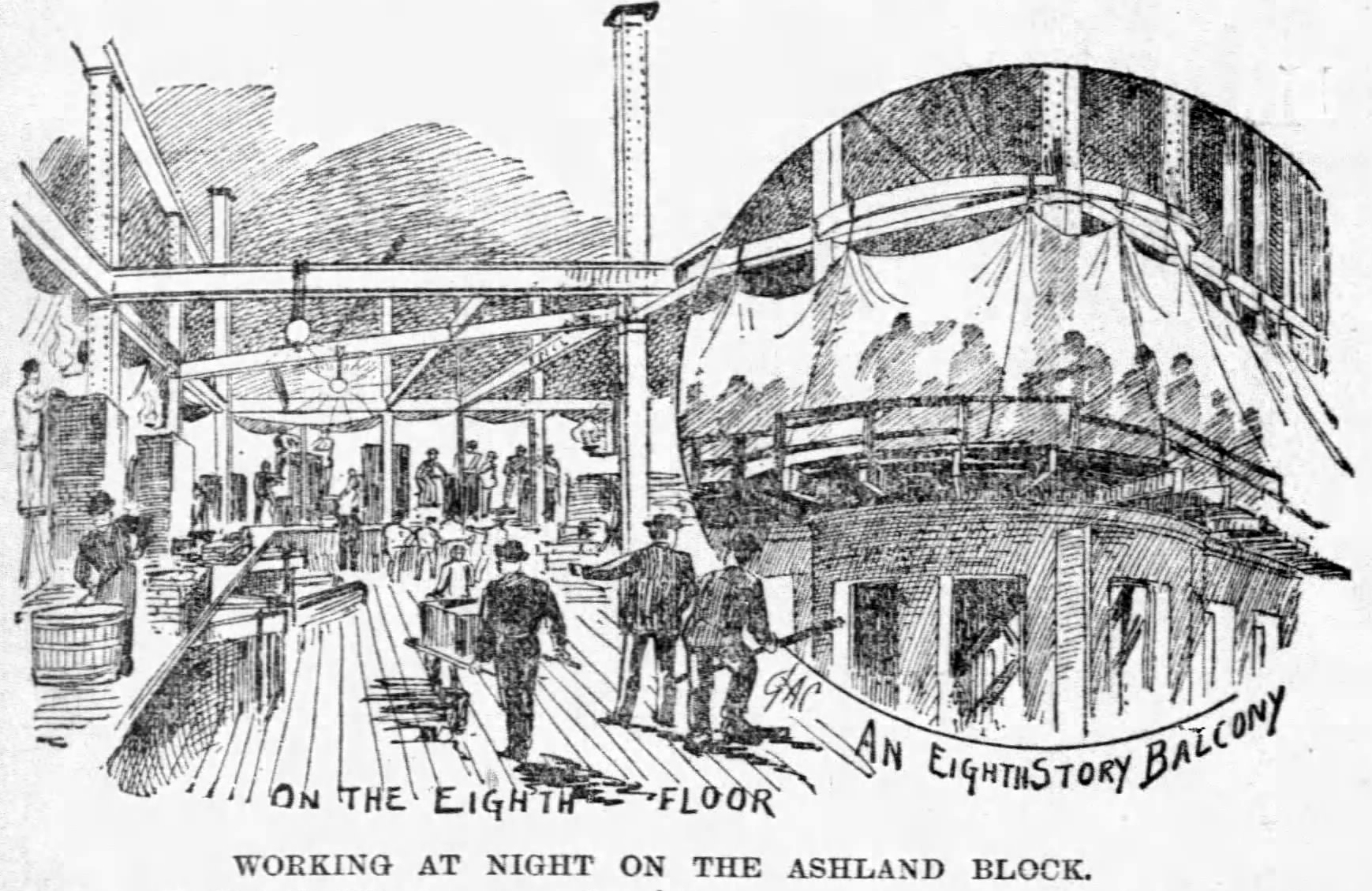 Building At Night—Gangs of Men Employed Every Night on the Ashland Block and Abstract Company’s Building. 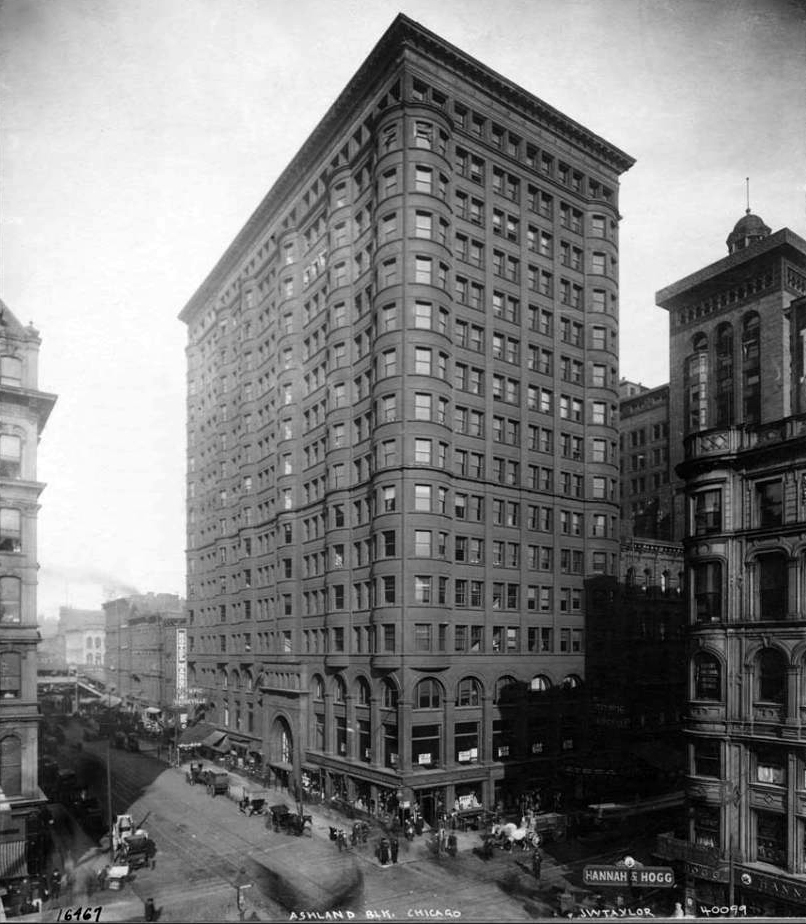 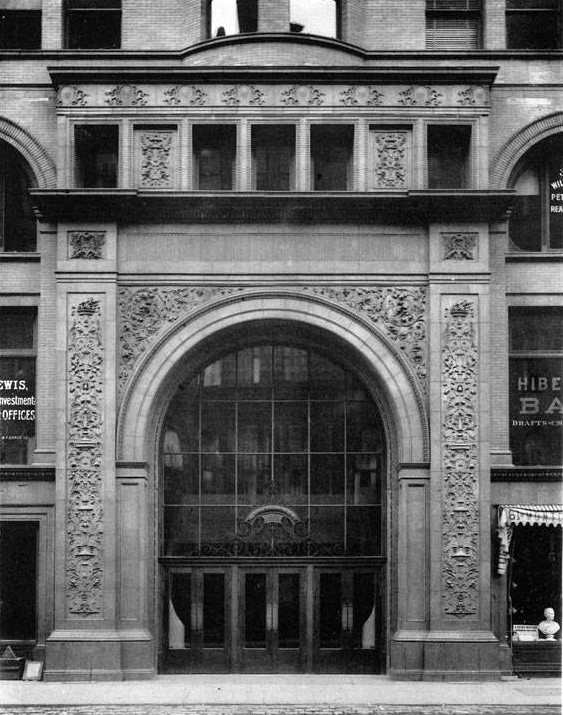 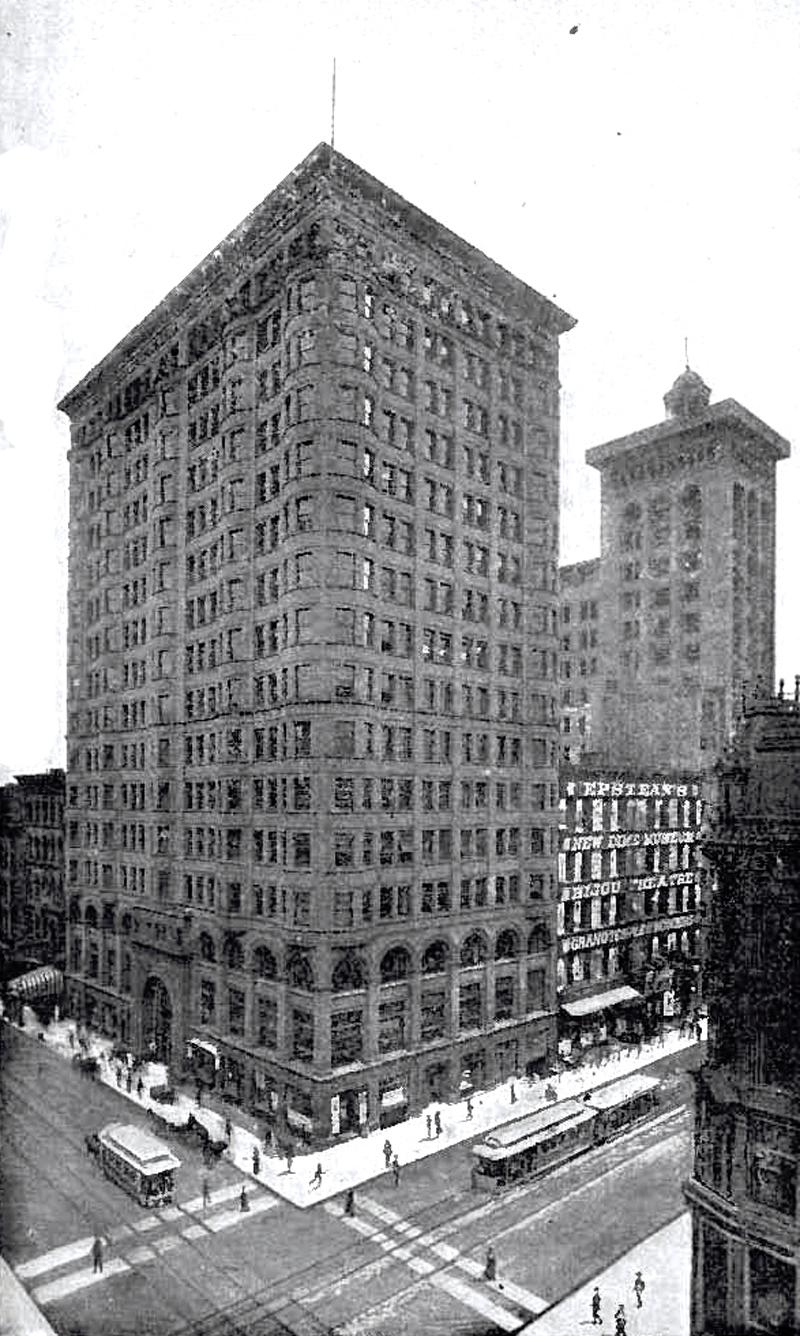 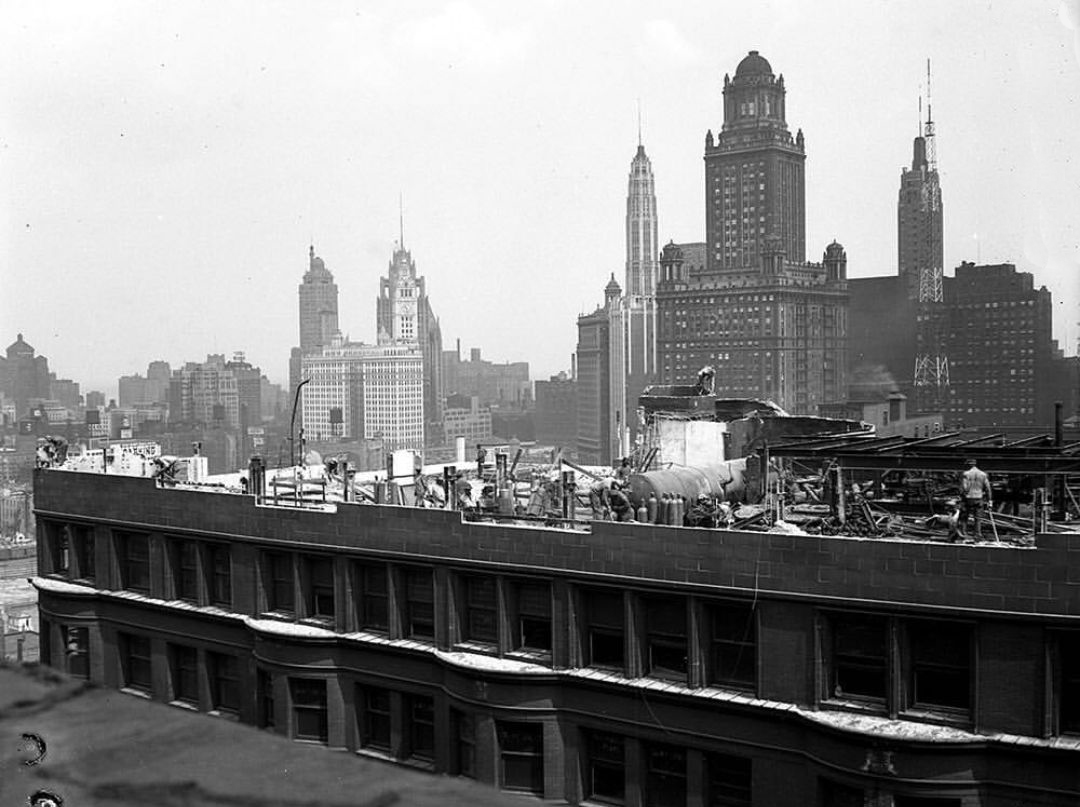 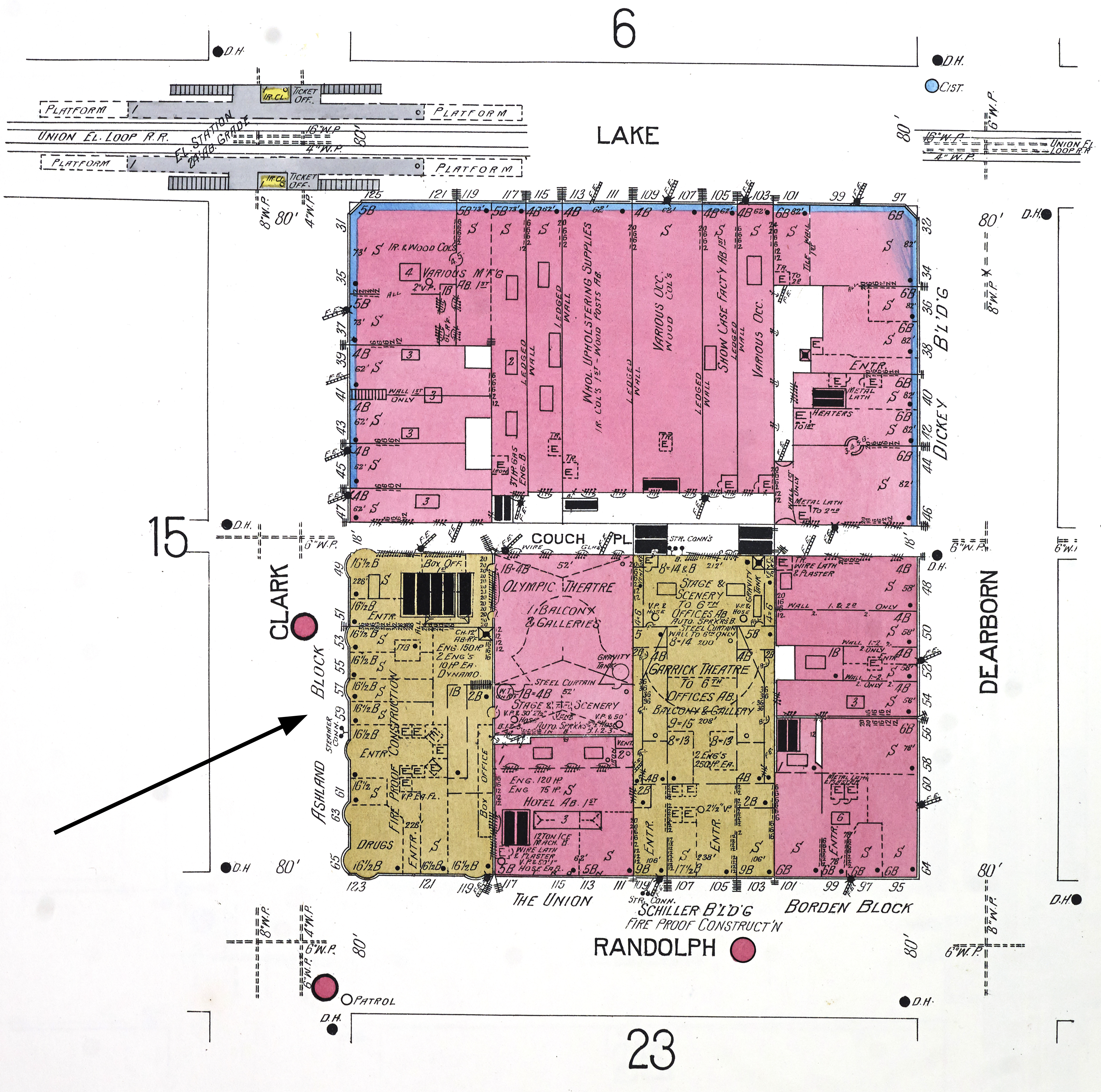