MESSRS. HALL, KIMBARK & CO.’S NEW BUILDING.
This imposing structure was erected in obedience to the demands of trade, Messrs. Hall, Kimbark & Co. finding their temporary quarters after the fire by far too small for their uses. It stands on Michigan avenue, just south of Lake street, on the old site, and in every respect one of the most thoroughly built and substantial blocks in our rebuilt Chicago.

The air of solidity and permanency which the building has about it, is in exact keeping with the character of the house. Hall, Kimbark & Co. were among out pioneer merchants, and for many years have led their trade in the West. They are large dealers in iron, steel, nails, and heavy hardware, which they ship to all parts of the Northwestern States. The reputation of the house is is of so high a character, and its resources are so large, that it is not incumbent on THE LAND OWNER to say much about it. Firms of lesser capital and smaller trade stand more in need of elaborate mention.

In the great October fire the house suffered in common with all, but were at once up in arms, and at work with the same perseverance and energy that first gave them their business reputation twenty years ago. They lost no time. In calling upon them to-day, you will be surprised at their enormous stock, and the perfect adoptability of their new building, which we illustrate in this issue, in handling it. Bars of iron and heavy anvils are not handled easily. But here they are tossed about with little trouble, all the appliances for the business having been introduced into the new store.

The manner is which such great firms as Hall, Kimbark & Co. came out of the fire, nd the satisfactory condition of their business at present, is proof enough of the wonderful recuperative power of Chicago. 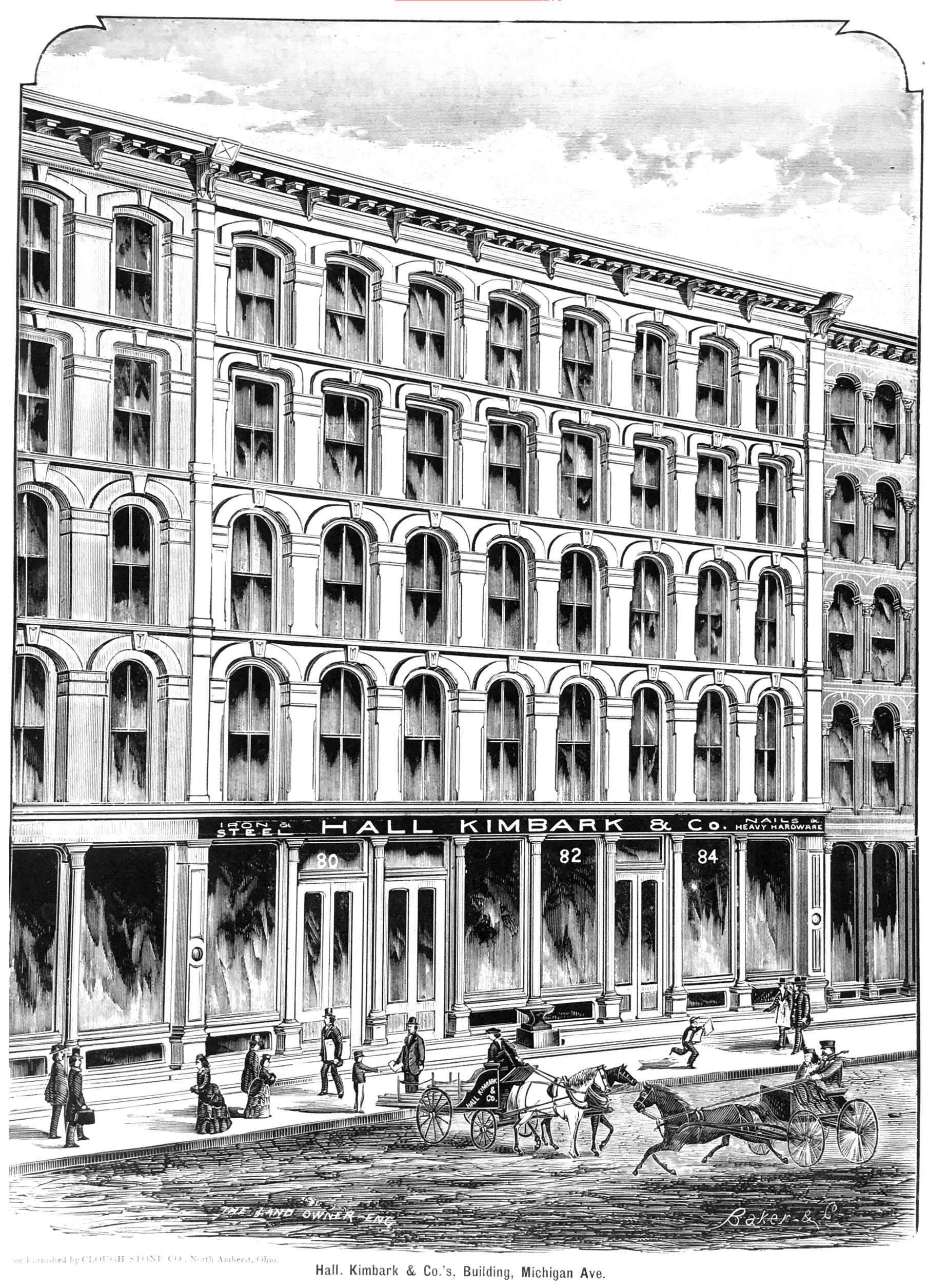 Senaca D. Kimbark.
Iron, Steel, and Hardware.
Prominent among the dealers of the hardware trade and in iron and steel supplies in Chicago is the above-named firm, now located corner of Michigan avenue and Lake street, with 132 feet frontage. This house, established in 1853, has built up an immense trade in the specialties of iron, steel, nails, heavy hardware, carriage hardware, trimmings and wood material. This house also supplies extensively blacksmiths’ machines of every description and of the latest improvement in make, and all materials required in the blacksmith trade.

This house employs 100 men in its sales and manufacturing departments, doing considerable manufacturing in Michigan at a factory of its own. Great credit is due Mr. Kimbark for the energy and superior management that has placed his business on the present substantial basis and commanding position in the trade. This characteristic was taxed, and proved its eminent efficiency in the rapid recovery and replacement of the damaged parts of this great establishment by their recent disastrous fire. The wheels were kept in motion and the business carried on with scarcely an hour of detention, and they now announce their full capacity of attending to all orders in their usual prompt manner. Mr. K. reports a satisfactory increase of sales over former years.

S. D. Kimbark’s iron and heavy hardware house, Nos. 74 to 78 Michigan Avenue, is the most extensive establishment of the kind in the west. The massive five-story building with a frontage of 132 feet on Michigan Avenue and 140 feet on Lake Street, and a floor space of nearly 75,000 square feet, is stocked with a line of iron, steel and heavy hardware, and other goods of a kindred nature, unsurpassed in magnitude and variety by any other house in the country. It is especially adapted to the business, being equipped with every facility that can be used in the storage and display of goods, and the satisfactory management of a large business. The office is conveniently situated on the first floor, another portion of which is devoted to sample rooms. 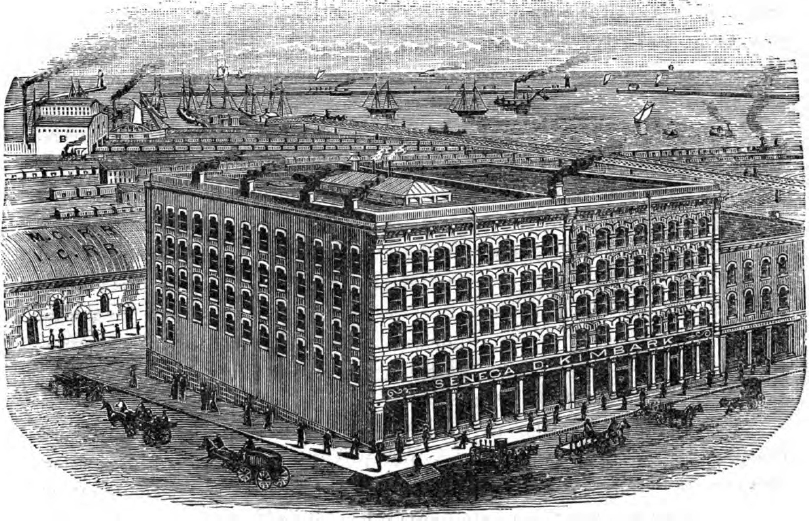 The latter are fitted up with a view to providing every convenience to buyers. They are heated by steam, are provided with desks and writing materials, and contain samples of all goods carried by the house, displayed in the most advantageous manner. In addition to articles classed under the general head of “heavy hardware,” the house also carries a large assortment of wooden materials, including buggy and wagon bodies, hubs, felloes, spokes, shafts, etc. The extensive manufactory for the manufacture of buggy and express wagon bodies and all kinds of wooden carriage materials, is located at Quincy, Michigan, adjacent to some of the finest timber regions in the state. The business was established in 1853 by E. G. Hall & Co., Mr. Kimbark being the junior member of the firm. In 1860 the name was changed to Hall, Kimbark & Co.; in 1873 to Kimbark Brothers & Co., and in 1876 Mr. Kimbark became the sole proprietor.

The era of advancement in Western progress carries with it practical economies in all branches of Industry. With the rapid growth of Chicago, ever increasing concentration of vast commercial interests within a limited area in the downtown district correspondingly necessitates the condensing of the interior spaces of the business buildings themselves. Prior to the era of tall structures and the elevated loop the merchant was proud to occupy a building of large floor dimensions in which the merchandise was placed on tables, shelves and counters taking up from 10 to 25 percent, of the cubical contents of the structure and leaving the balance vacant.

The problem which now confronts the merchant is to fill these air spaces with goods, thus limiting the superficial area of the building and diminishing the rent. As business con centrates within a small area of the city, rents in this area will necessarily advance. A good example of this filling of air spaces is shown in the remodeling of the S. D. Kimbark Building at 80 to 84 Michigan avenue, recently completed from plans and under the supervision of Hill & WoJtersdorf.

Mr. Kimbark, the pioneer in the iron trade of Chicago, has for many years occupied, in addition to his own entire building, the basement and first story of the Hale-Ayer Building on the southeast corner of Michigan avenue and Lake street. 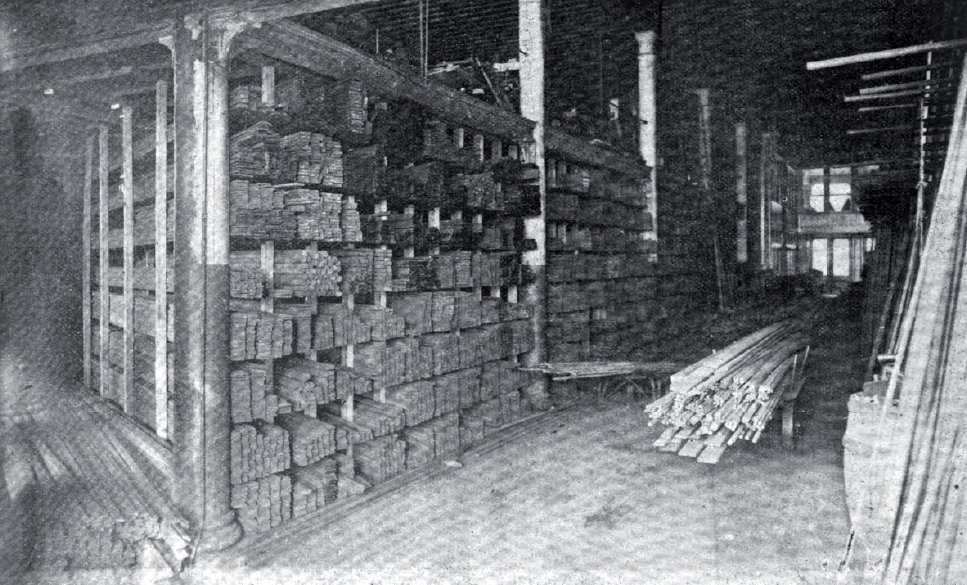 The immense stock of iron and steel formerly stored in the latter structure has been transferred to the Kimbark Building, and still there is room to spare. To accomplish this the general offices, which were formerly on the main floor, have been moved to the entresol story erected along the entire front part of the first story, as shown in the accompanying illustration, leaving on the first floor only the shipping and city offices, which are on either side of the four large entrance doors. The carrying capacity of the rear part of the main floor was so strengthened that it can carry 3,500 pounds per square foot with sateiy.

Above the diagonally running racks (represented in engraving showing interior view), on which the t>ars of iron and steel are horizontally placed to a height of eight feet, is the entresol story. Similar alterations were made in the basement and upper stories, ample light being provided by the installment of an electric light. 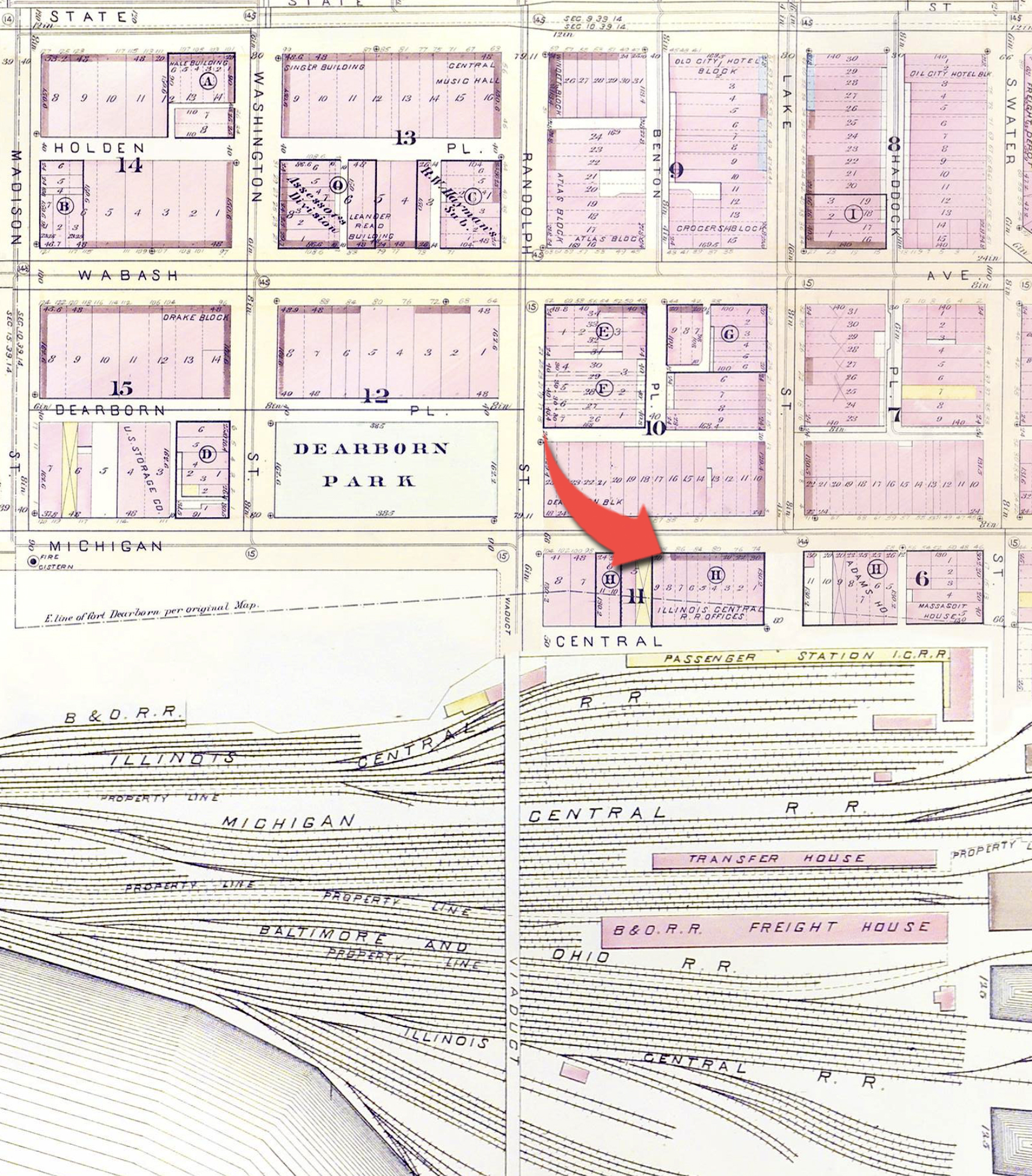 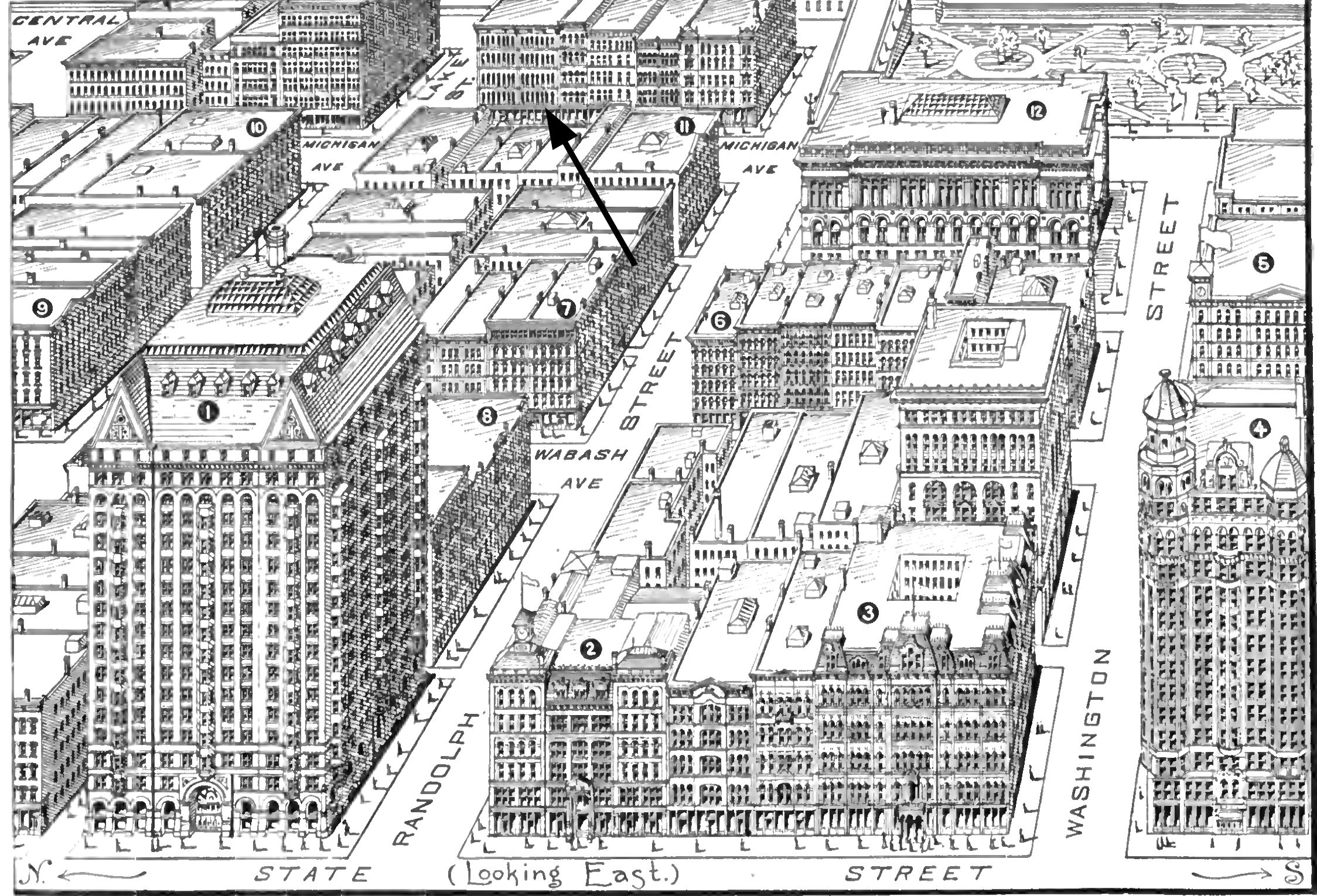 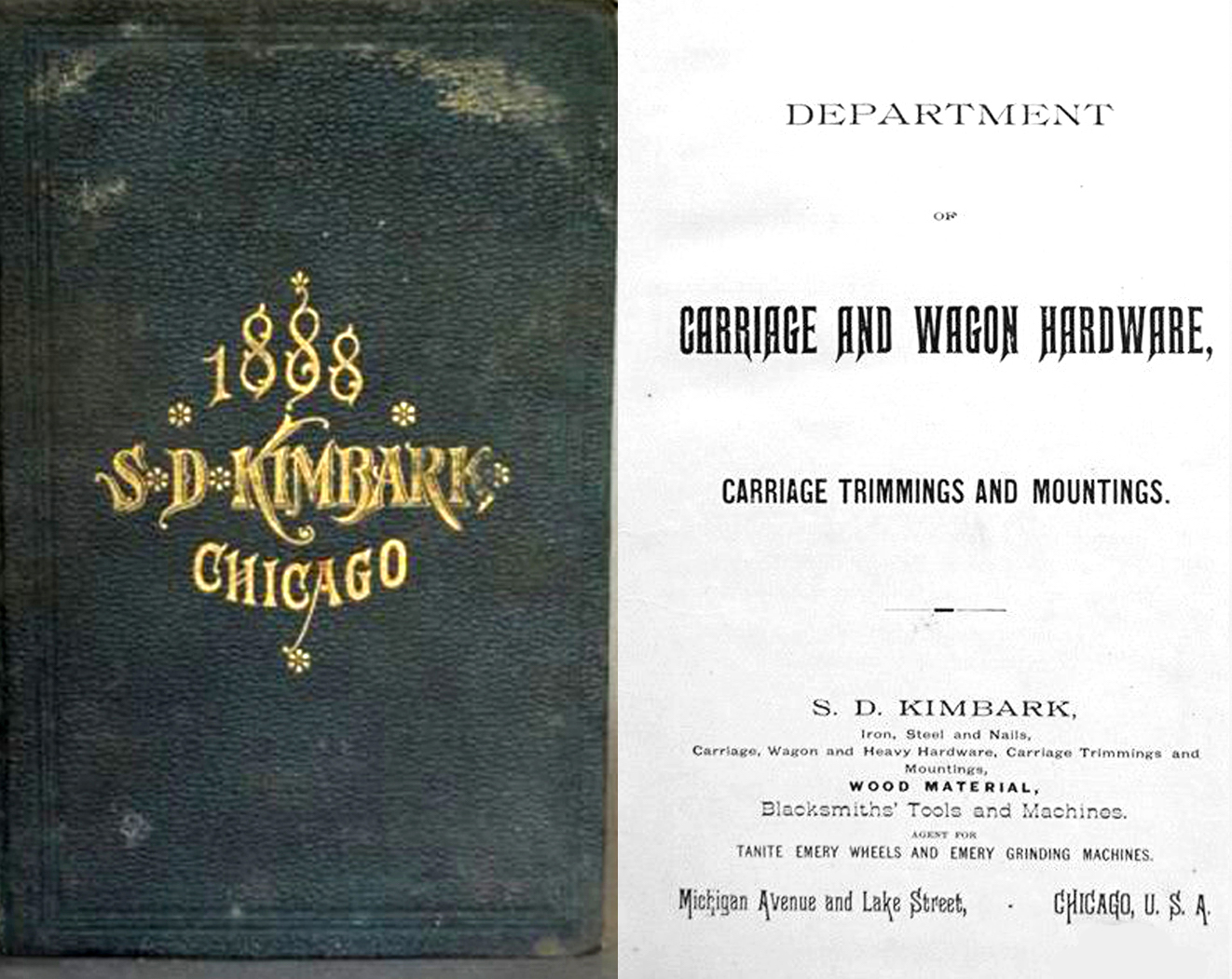 After a business career of forty-six years, Seneca D. Kimbark yesterday announced his retirement. At the same time it became known that the S.D. Kimbark company had been absorbed by its largest competitor, Kelly, Maus & Co., 1 West Lake street. Mr. Kimbark came to Chicago in 1854, and in 1858 started in the hardware business. In 1878 the hardware house with which he was connected took the title of the S.D. Kimbark company. Mr. Kimbark’s two sons, Charles A. Kimbark and Walter Kimbark, have been associated with him in recent years as partners. Until a short time ago the business was said to be in a prosperous condition. Four months ago the firm went through bankruptcy and has since been in the hands of a receiver. 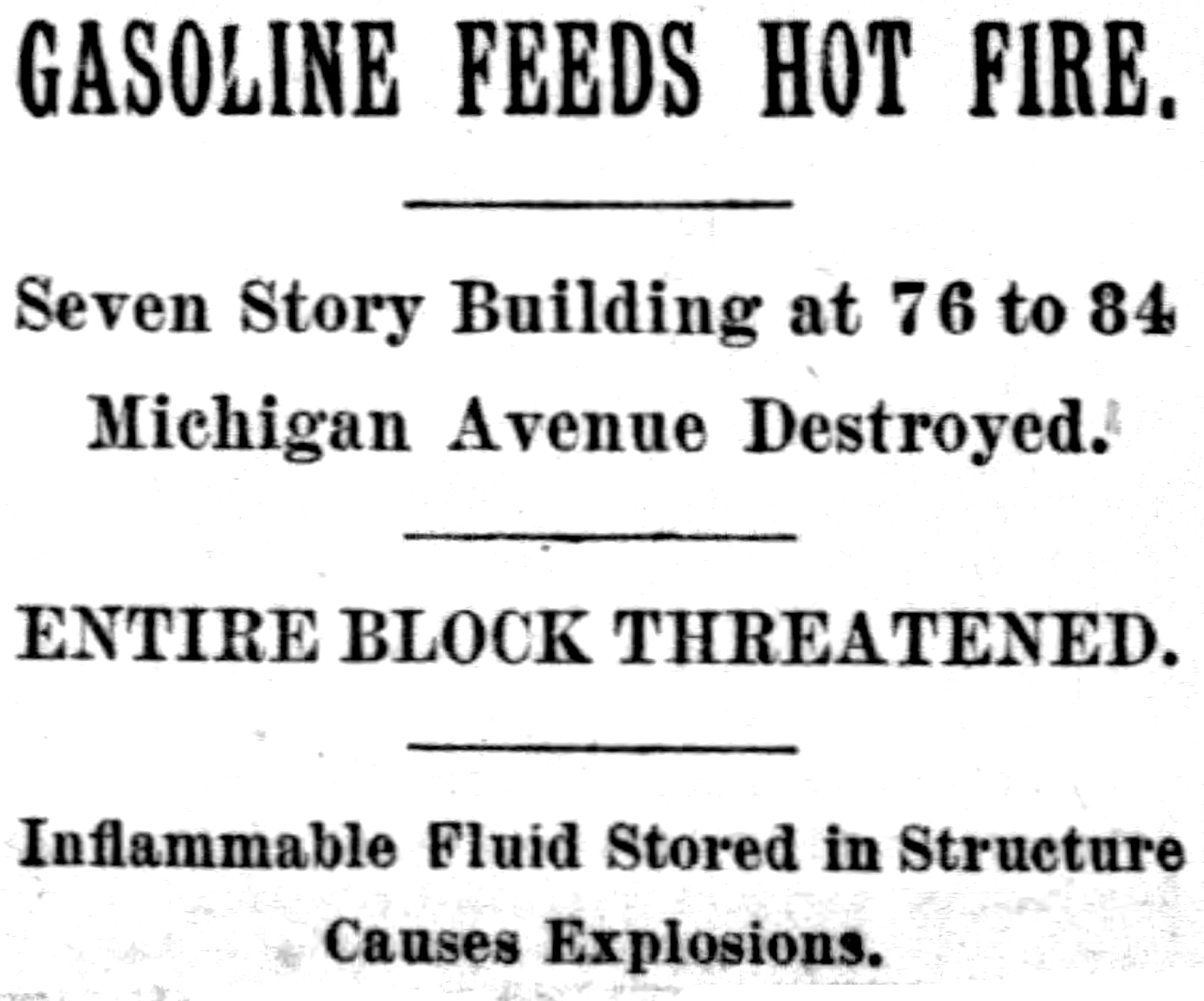 Fire of most threatening and spectacular proportions started in a building at 76 Michigan avenue late yesterday afternoon, and made of the wholesale district a crater of flames and smoke which drew thousands of spectators and blocked south side traffic for an hour.

For a time the entire block from Lake street to Randolph street on both sides of the street was in danger, but the quick work of twenty fire engine companies, aided by the fireboat Illinois, which came up the Central avenue slip, and attacked from the rear, brought the blaze under control. The entire loss was not more than $75,000.

Falling walls and gasoline explosions made the fighting space of the firemen extremely precarious. Fifty feet of brick wall fell five stories at one time into Michigan avenue, crashing at the feet of the members of engine company 42, commanded by Lieut. Faulkner, who was the only man to escape from the roof of the cold storage building fire at the World’s Fair. Six hundred girls, employed by the E. L. Mansure company, in the building adjoining on the north of the ruined structure, had left the premises fifteen minutes before the fire became known.

Intense Heat at the Start.
When the first company arrived the flames were breaking from three upper stories and the heat was so great as to blister the fronts of the buildings opposite.

The cause of the fire could not be determined. The building was known as the S.D. Kimbark block and had been vacant for months. Workmen had been repairing it during the day for the occupancy of the Beckley-Ralston company and the Goodyear Tire company. The electric wiring had just been installed.

The blaze probably started from this cause or from salamanders left to dry the cement. Quantities of benzine and gasoline had been stored in the basement and some on the second floor.

Streams were directed at every floor of the burning structure and from the rear, but it blazed with increasing intensity from top to bottom. Great tongues of fire leaped across the street and soon other streams had to be played on these buildings in order to save them. The woodwork began to smoke and the windows to fall in. The Kimbark building was a furnace, and the Mansure building began to go.

Throngs of Spectators.
At this time the line of hose from the fireboat came, and other streams were taken up the rear of the Mansure building and over the roof from the buildings on the south. Drawn by the heavy clouds of smoke that made the street as dark as night, and the flames which rose far into the air and could be seen over much of the city, the streets were congested with sightseers. It was estimated that 8,000 people were crowded in the avenue between Randolph and Madison streets.

Then came the explosions which caused the crowds to scurry for shelter and filled the smoky air with flying missiles. All but the firemen fled.

Wall Falls in Street.
The top wall of the Kimbark building toppled, and a cry went up and down the street.

“Clear back there, forty-two,” cried Chief Campion, who was directing the fight from the front.

“Forty-two” spread back, calmly watching the descending mass of bricks and plaster until it fell with a crash in front of them. Before the sound of it was over they were back in the old place, taking advantage of the new opening. Gradually the determined work had its effect, and the fire was centered in the building where it had started. Here it finally died out. The greatest loss came to the Mansure company. Thirty thousand dollars’ worth of machinery and silk was ruined. The Hamburger company, at 86 Michigan avenue, also was damaged; also the the J.H. Conrad comapny across the street. 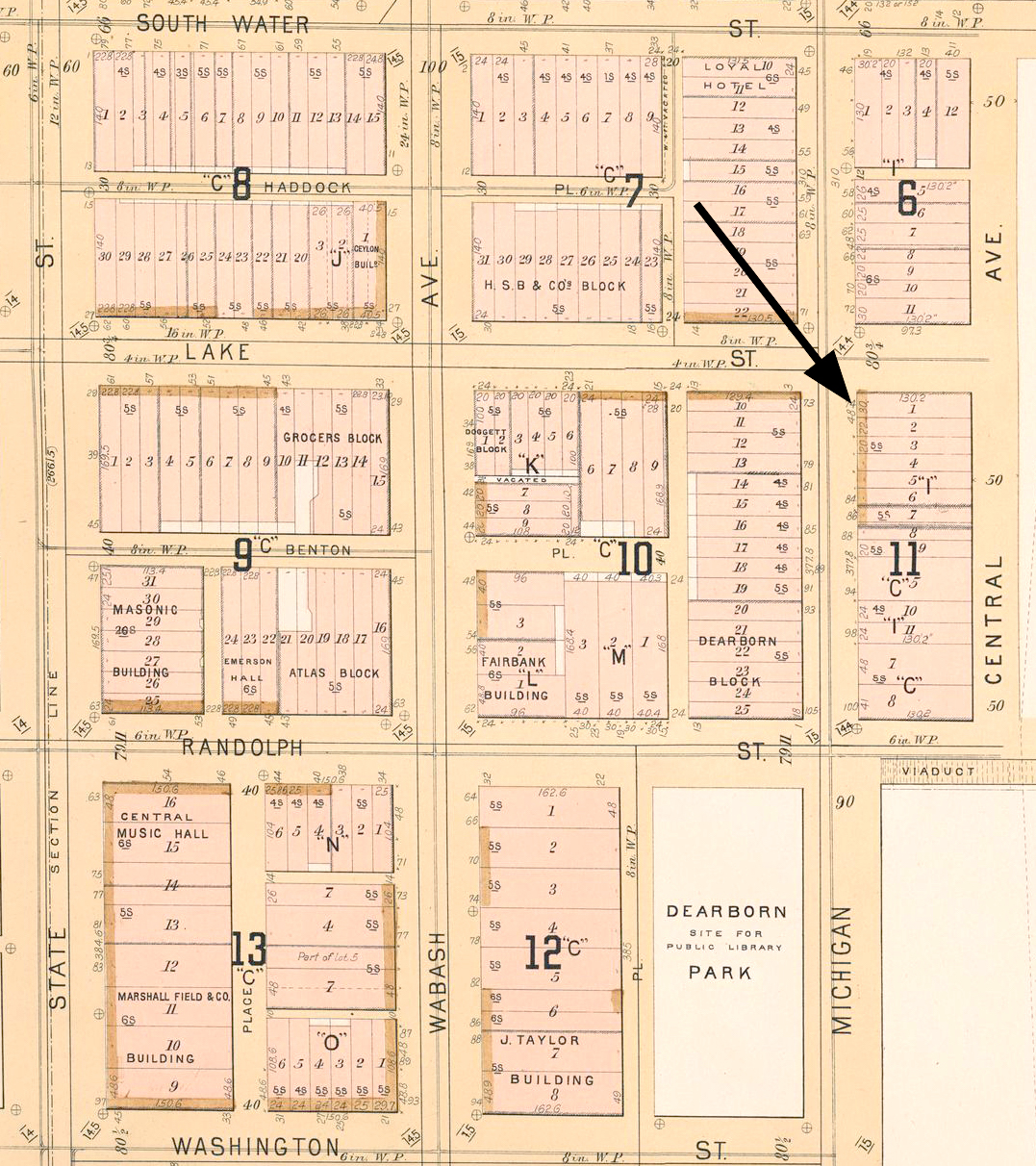 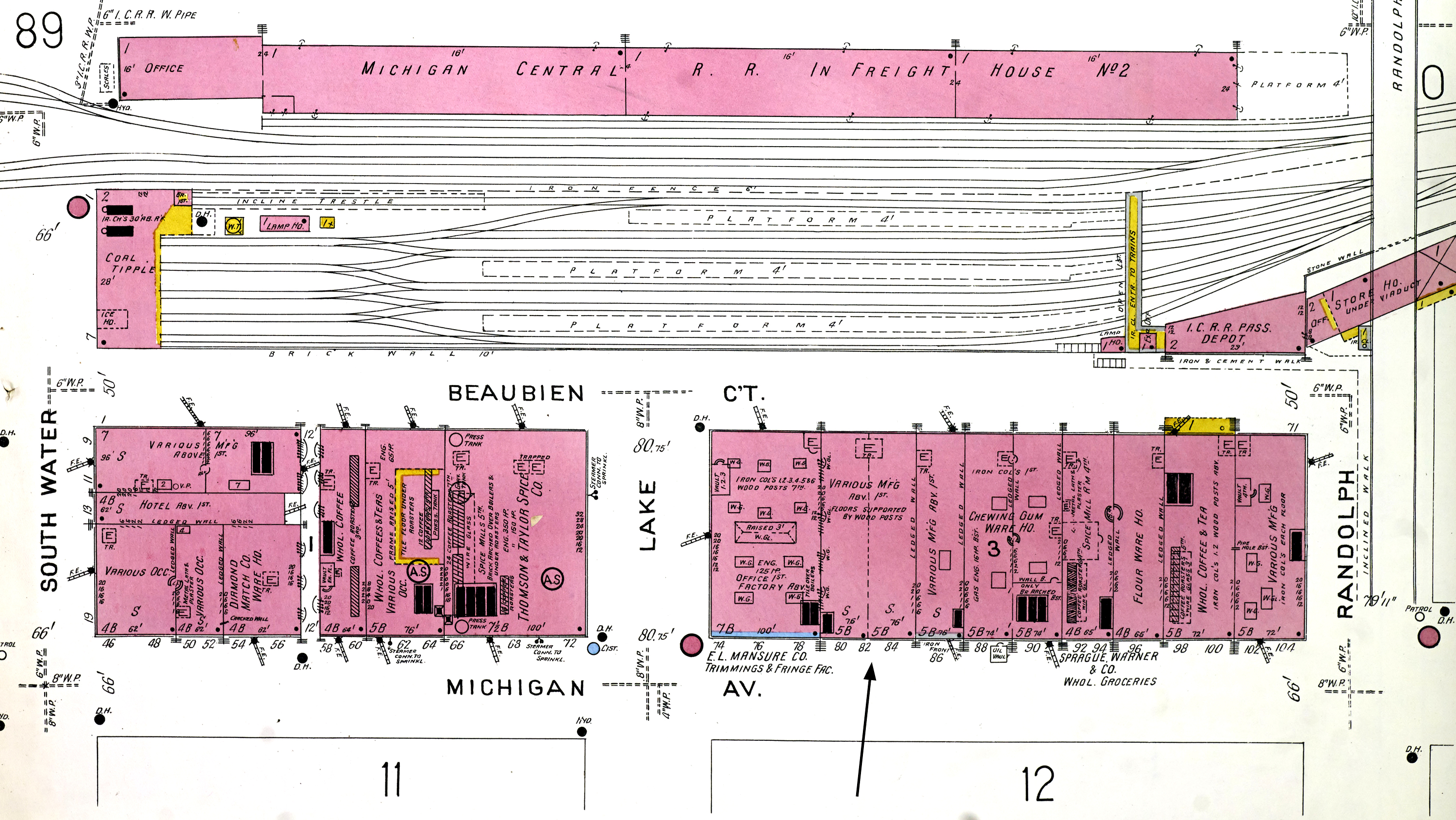