It was known as the “Greatest Refrigerator on Earth,” and was estimated to be 130 by 255 feet. The lower level provided cold storage for the thousands of pounds of food served every day at the fair; while the upper story featured an ice skating rink for fair patrons.

Its Romanesque design was conceived of by Franklin P. Burnham. Fifteen people were killed in the blaze and it is believed to be caused by a negligently placed wooden element near the smokestack. 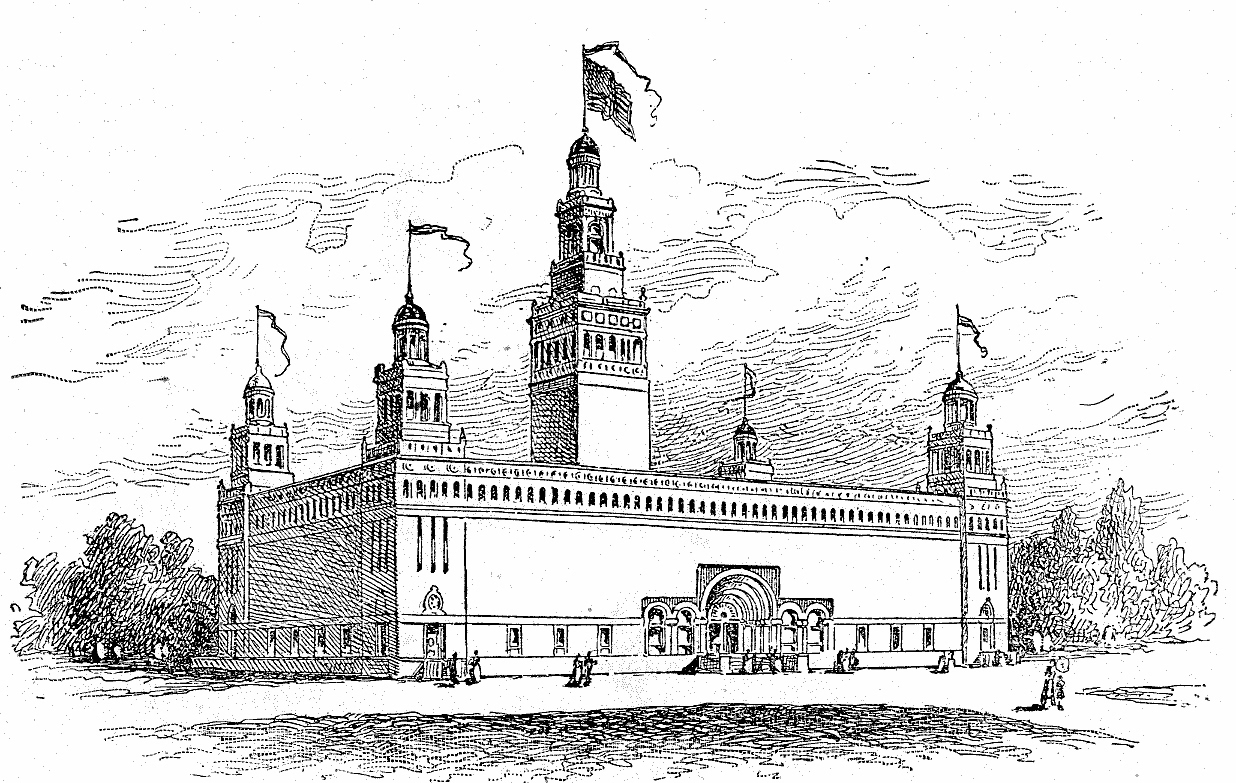 The Following text From Bancroft’s The Book of the Fair

Except for a few specimens contained in Machinery Hall, the exhibits of refrigerating apparatus and of ice-making machines were installed, as I have said, in the Cold Storage building, in the south-western portion of the grounds. Here were displayed the various methods of artificial freezing, and the several processes for the preservation of such perishable articles as fruit, meat, eggs, and butter. In the manufacture of ice, filtered water, and condensed and purified steam were the principal materials used.

Almost while in the act of penning my description of the Cold Storage building and its contents, came their destruction by fire on the evening of the 10th of July, 1893. This edifice was erected by the Hercules Iron company of Aurora, Illinois, and the exhibits, together with the systems which they illustrated, were those of the West Side Artificial Ice company, of Chicago. From the centre of the structure rose to a height of 220 feet a wooden tower, covered with staff, and surmounted by a dome. Here it was, near the base of the dome, that the fire was first discovered. The engines were quickly on hand, and from a narrow ledge, a few feet below, the men stood, hose in hand, prepared for action. But at this juncture tongues of fire shot forth near the base of the tower, and a moment later the flames broke out with a smothered roar from every portion of the tower, cutting off the retreat of the firemen. Then followed a scene of horror such as few have ever witnessed. Around this narrow ledge the firemen ran, vainly seeking an avenue of escape. One slid downward on a rope; another on a line of hose; but hose and rope snapped, and the men disappeared in flame and smoke. Some fell, and some threw themselves headlong on the roof, more than eighty feet below; and as the tower parted in the middle, and fell crashing into the burning gulf, the one human being who remained on the ledge was seen to leap into air, and then fall prone into the devouring sea. 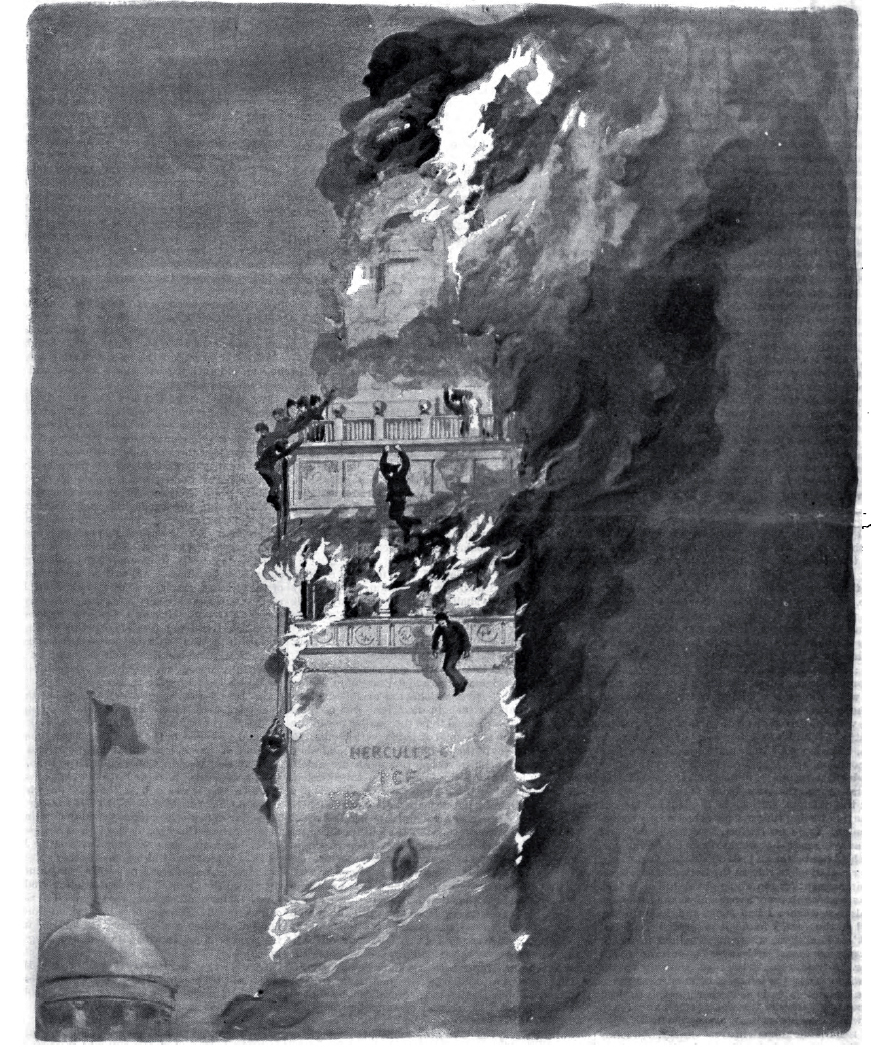 During the investigation of the coroner’s jury it was shown that the steel smoke-stack enclosed within the tower was fourteen inches shorter than the structure itself. In the plans, as prepared by the architect, this space was to be occupied by a thimble for the protection of the exposed wood-work; but in the construction of the building this safeguard was omitted, and hence the disaster, with its attendant holocaust, in which seventeen lives were lost. Of the gate receipts of the following Sunday $25,000 was set apart by the management as the nucleus of a relief fund, and this was swelled by further contributions to nearly $100,000. 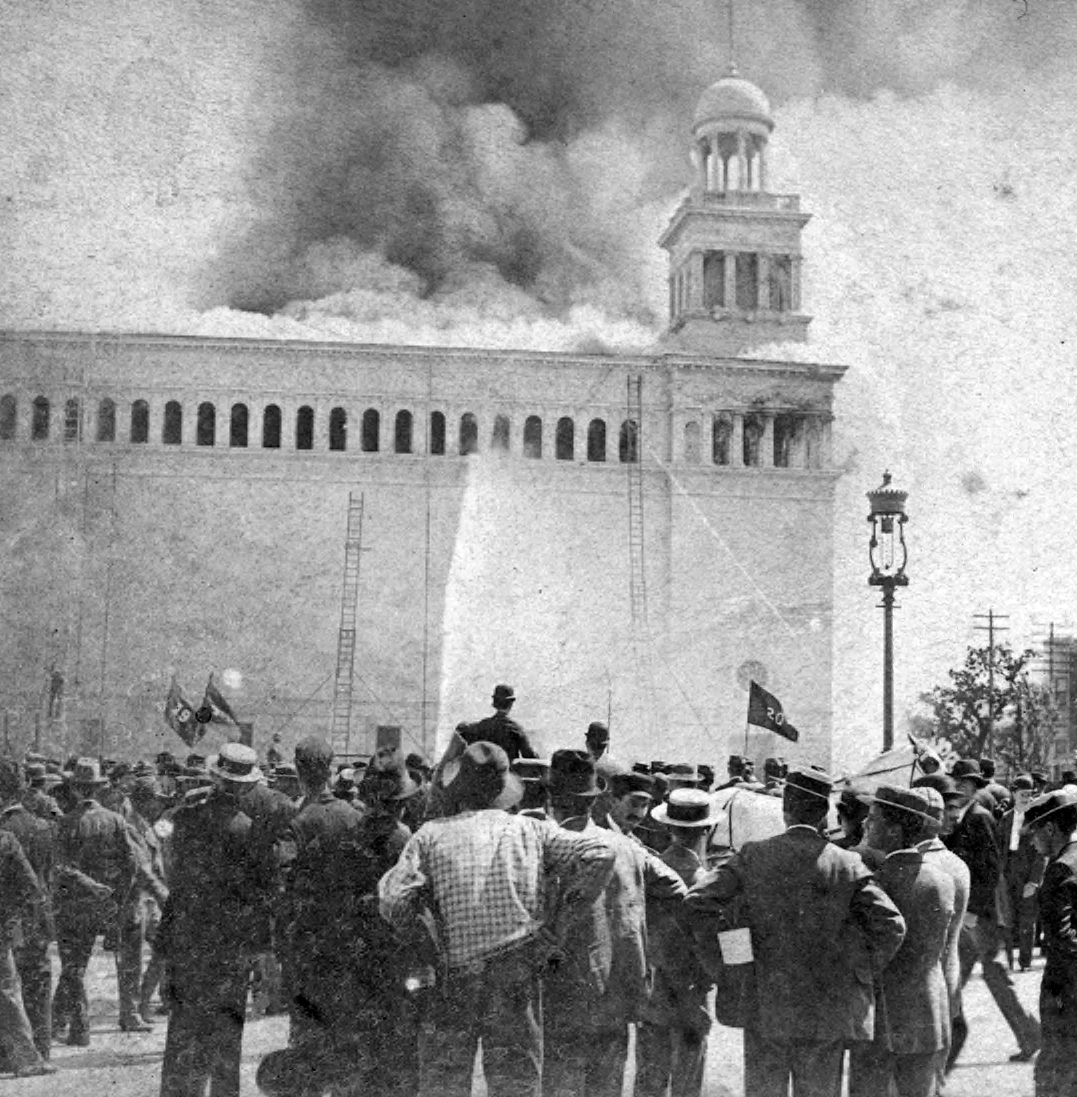 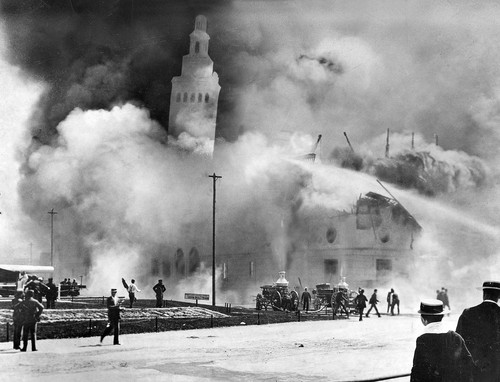 By the end of the fire, 15 souls had been lost. The blaze claimed 12 firefighters and 3 civilians.

A twelve foot hollow copper statue of Christopher Columbus stood in the east entrance of the Cold Storage Building and was the only artifact to survive the fire. In fact, the firefighters had roped the statue and pulled and tethered it to one side so that they could more easily move the fire apparatus through the entrance. Ironically it was the tethering that helps the statue survive the collapse of the entrance way. William Henry Mullins of Mullins Mfg. Co. from Salem, Ohio was the owner of the statue and contacted the city with his offer of dedicating it to the memory of the victims of the fire.

Mullins was quoted in a July 19, 1893 Chicago Tribune article as saying the he “will give and dedicate it as a monument to the memory of the brave fellows who lost their lives in the terrible disaster. The statue would, I think, make as appropriate a monument to the memory of these brave men as could be devised. It stood there with them in the building in which they lost their lives.”

After the close of the exposition, the relic of the fair was presented to Chief Joseph Kenyon of the 12th Battalion of the Chicago Fire Department. The statue was erected in front of Engine Co.51’s house at 6345 S. Wentworth more than likely because it was Battalion Headquarters and Chief Kenyon was himself a veteran of the “Cold Storage Fire.”

After Engine 51 ceased to exist the statue was moved to the C.F.D. Repair Shops at 31st and Sacramento where it stayed in storage for nearly 40 years. It made a brief reappearance at city hall in October of 1993 and then was relocated to the 911 dispatch center on Madison Street. The Fire Museum took possession of the statue in October 2001 and has displayed it proudly ever since. 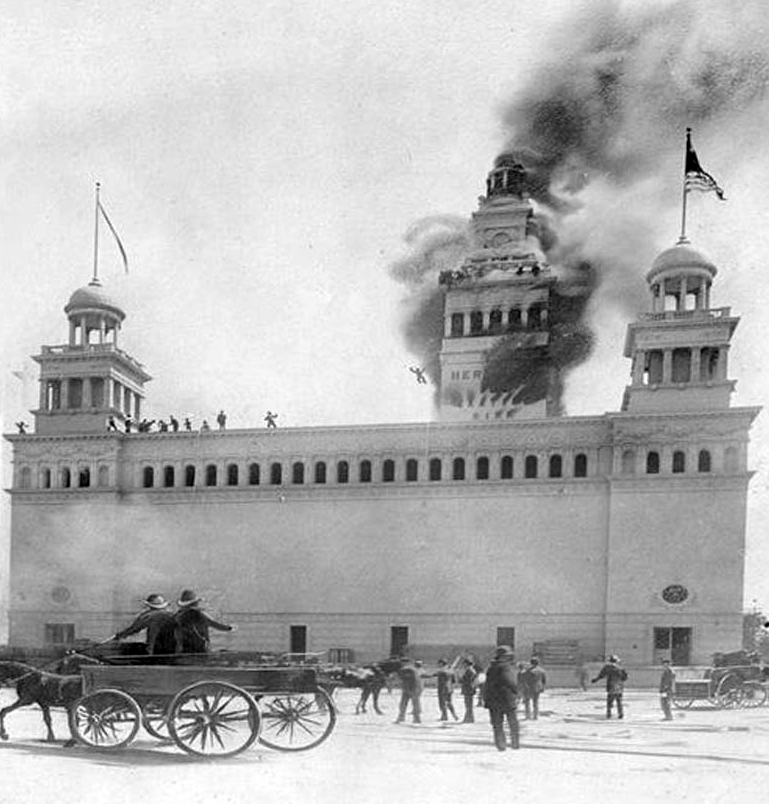 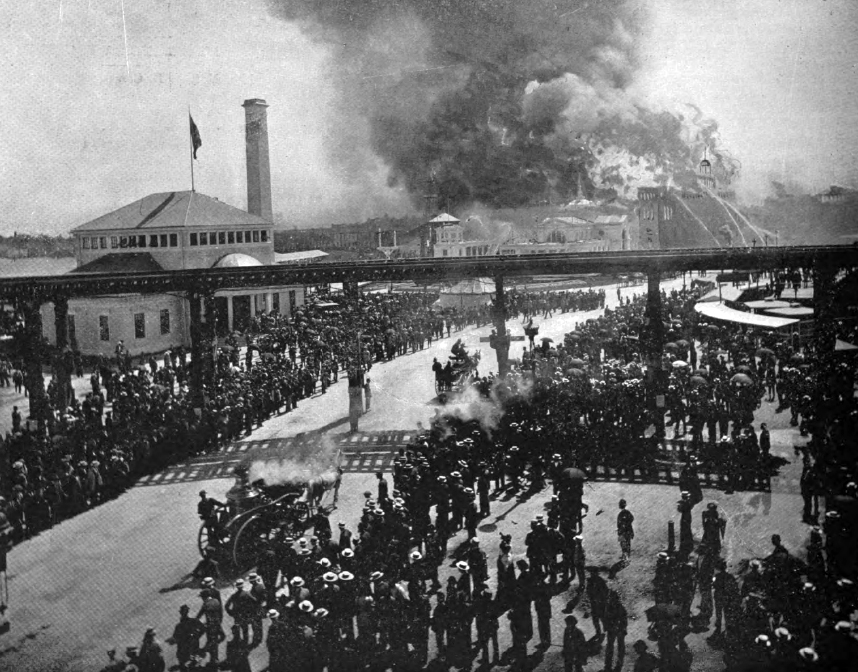