At 159-161 Dearborn Street, once boasted a beautiful facade, but this was removed in 1889, when the structure was remodeled. The building has burned twice. It is 40 feet wide, 120 feet deep, and 80 high, with 7 stories. It is occupied by the Saratoga Hotel and the Journal, the oldest daily publication in the West. 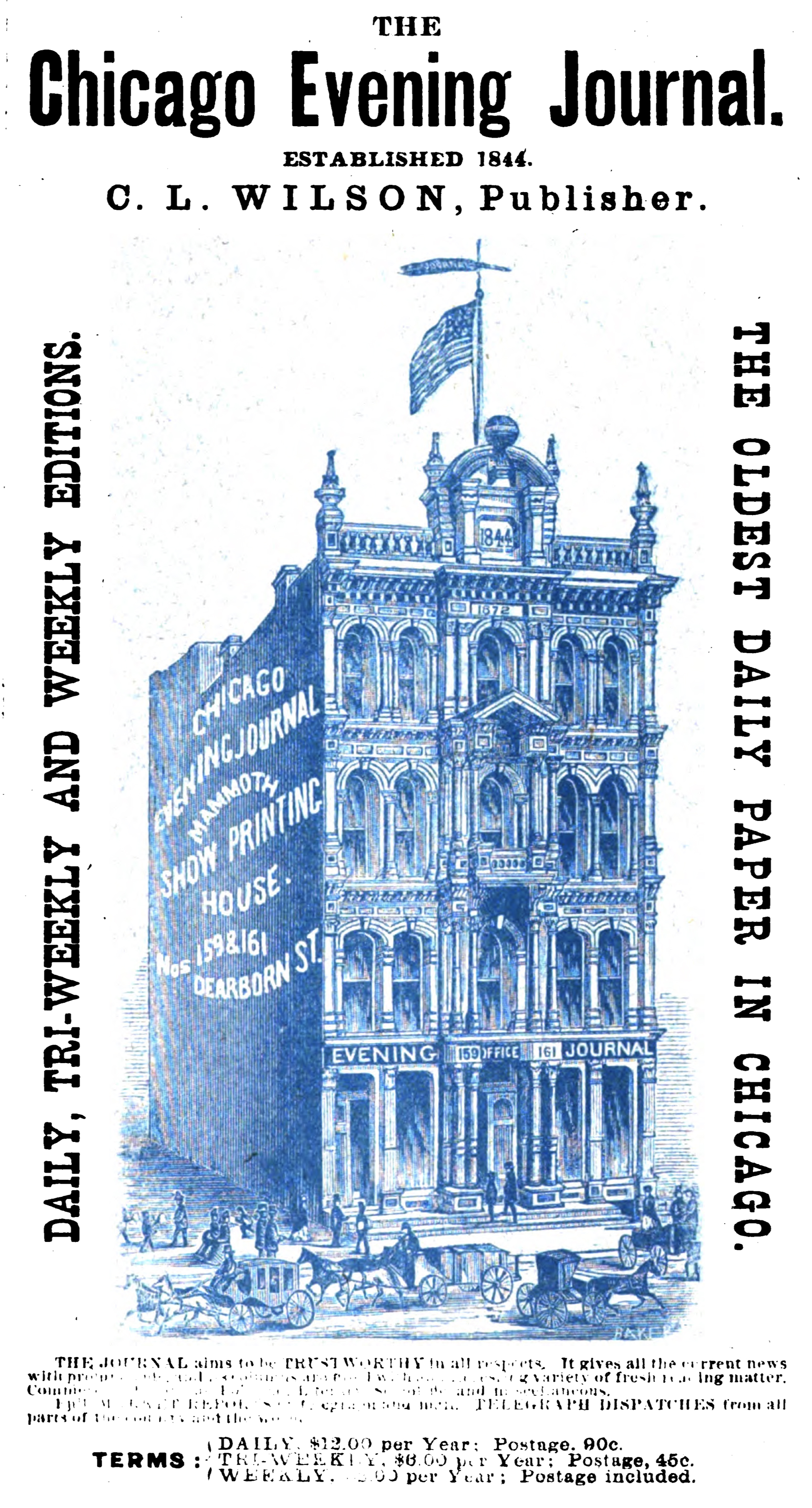 The new Journal Building, Nos. 159 and 161 Dearborn street, on the east one and one-half millions of dollars, not over one hundred dollars’ worth being saved out of their united stocks. With energy unconquered and undismayed by the appalling calamity, they organized the present firm out of the materials which the fire could not destroy—their experience, capacity, credit, and reputation—and in a short time they had arranged for a fresh start, having hastily constructed a temporary brick building on Michigan avenue.

Keeping a sharp look-out for some suitably located building of sufficient size to answer the requirements of their immense business, they secured, early in the spring of the present year, the building just completed and occupied, and the construction of which was pushed forward at as rapid a rate as was possible with a structure of this character.

It would be impossible for the visitor to make a tour through this grand establishment, noting the perfection of the building, and its internal arrangements and conveniences—its six floors crowded to repletion with almost every description of dry goods manufactured in this country or in Europe—without experiencing a feeling of incredibility that its proprietors are the same gentlemen who were overtaken by the disaster of October last. Yet such is the fact. It is only one among the legion of business miracles wrought by our princes of trade. With her destinies in the hands of such men, no one need wonder that Chicago should become the novel and the model city of the world.

From Marquis’ Hand-Book of Chicago, 1885:
The Chicago Evening Journal is issued every evening, except Sunday, at 3 and 5 o’clock, and has weekly and tri-weekly editions. The paper has four large pages with nine columns to the page. It sells for five cents per copy, or $10 per annum. The weekly is issued Wednesday for $1.25 a year; the tri-weekly, issued every other day, $4 a year. It is printed on a six-cylinder Hoe steam press, and is issued from the Evening Journal Building, Nos. 159 and 161 Dearborn Street.

According to the public notice the Chicago Evening Journal, the oldest daily newspaper in Chicago, was sold yesterday afternoon to Dr. S. F. Farrar for $163,000. The sale took place in the business office of the paper. All the stockholders were present in person or by their attorneys. Congressman Dingley of the Second Maine district and his brother of the Lewiston Journal were among the bidders, but the price soon ran beyond their expectations. A Philadelphia syndicate was represented by Maj. M. F. Handy’s younger brother, who contented himself with watching the bidding, it being understood that the syndicate had failed at the last moment to raise the means necessary to achieve its wish. Mr. Asheraft of the firm of Ashcraft & Gordon acted as auctioneer. After stating the nature of the property, consisting of the newspaper franchises, plant. etc., and a leasehold interest in the Journal Building, he called for bids first on the leasehold interest in the Journal building This was runup from $25,000 to $55 000, Mr. Sebree of the Saratoga, Hotel, whic occupies a part of the building, being an active bidder. The bidding for the newspaper property, franchises, etc., exclusive of current bills and accounts, began at $50,- 000. The Dingley brothers went out on a single bid of $76,000. After they had quit the price gradually reaching $105,000, making a total of $160,600. At that figure Mr. Ashcraft called for bids on the whole property and after waiting for two hours for one bidder, who thought he could raise the bid if time were given to hunt up a capitalist, was finally knocked down at $163,000 to Dr. Farrar. The occasion for the sale was the termination of the charter Aug. 6 last, and the failure of the minority stockholders to agree on some plan of organization. The stock of the expiring company was concentrated in the following hands:

Dr. Farrar made his first payment according to the terms of the sale and took possession. It is understood that he will retain Siason Thompson as editor and W. A. Hutchinson as business manager and does not contemplate making any immediate change in the heads of departments or policy of the paper.