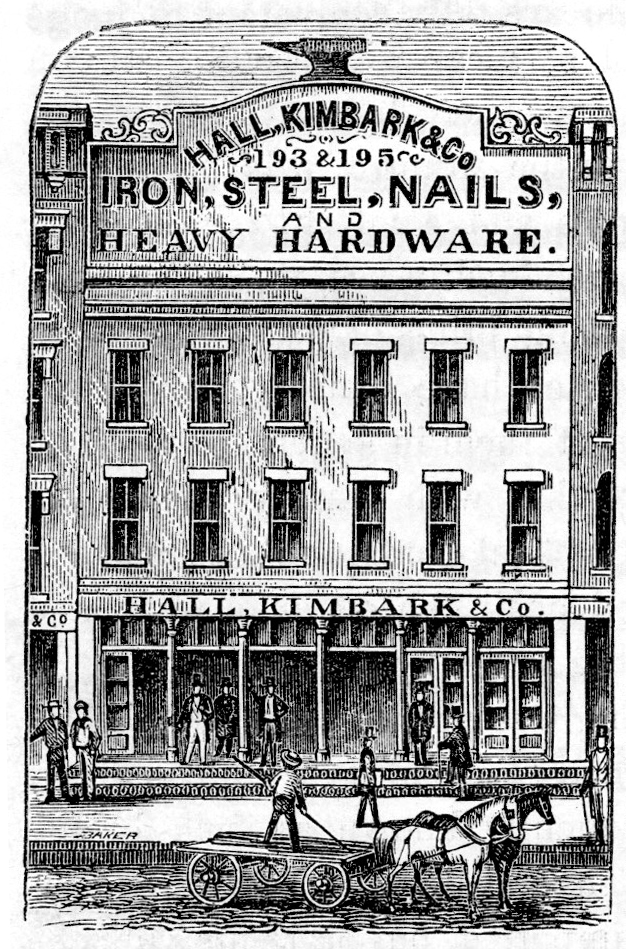 It is probable that in no branch of the general commerce of Chicago is her interest becoming more rapidly developed than in Iron and the products of its manufacture. The rapid increase of population in the North-West, the great demand for articles of Heavy Hardware, has induced men of capital and business capacity, men who have been educated in the hardware trade, to add Heavy Hardware to that of their former business.

The most noteworthy of these houses, perhaps, is that of HALL, KIMBARK & Co., who commenced business in Chicago in the spring of 1853, since which time they have continued to extend their business and increase their facilities, promptly meeting every engagement, and passing unharmed through the financial storms which have swept over our city, until at the present time they stand at the head of this branch of trade in this city, and represent one of the fairest and most reliable mercantile firms in Chicago. In order to secure a more central position and other business facilities, they fitted up the two stores, Nos. 193 and 195 Water Street, forty by one hundred and fifty feet, three stories high with a basement, opposite the Board of Trade Rooms, which they now occupy, and where may be found the largest and best stock of Heavy Hardware in the North-West. Their trade amounts to about one million five hundred thousand dollars per annum. In order to meet the increased demand for many articles in their line of trade, they employ all the working force, most of the time, of one of the largest foundries in the North-west. Among the many things they have manufactured, we may mention a few leading ones, viz: Improved Thimble Skeins and Boxes for wagons; Tire Benders; Blacksmith or Fire Drills; Road Scrapers; Fence Keys; Colter Hubs; Swedge Blocks; and a variety of Cast Iron goods; also extra quality of Plow Bolts, from best Charcoal Iron.

Thimble Skeins they make a speciality; having almost unlimited facilities, they could turn out one hundred set per day of finished Skeins, of as good a quality as has ever been offered in this market, having spared neither effort nor expense in bringing their patterns to perfection. They are prepared to offer the trade in this line the best article made in the United States. All the Skeins now manufactured by this house are chill-hardened, which will increase their durability at least one hundred per cent. 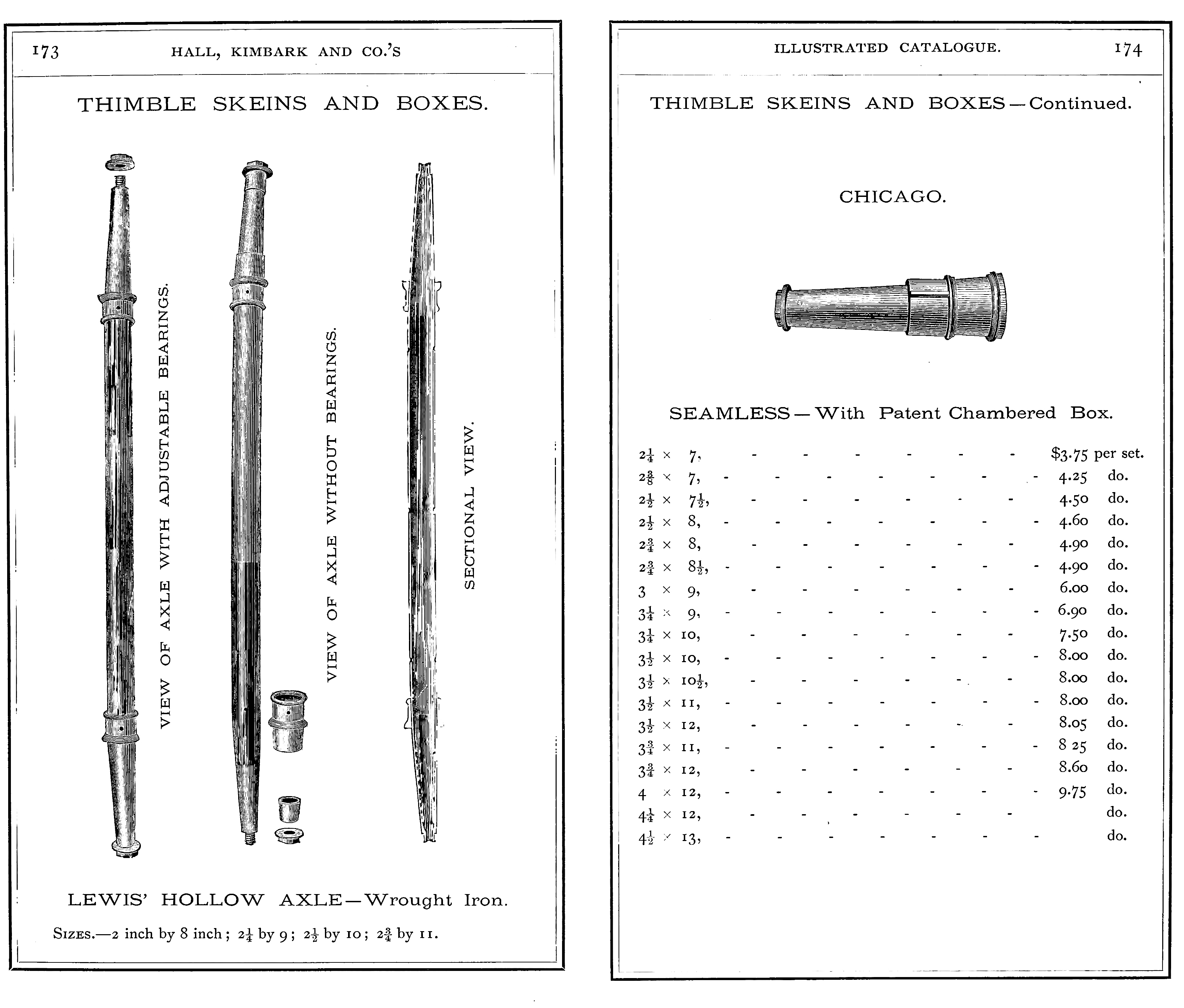 Early American wagons employed wooden axles with tapered ends that were fitted with a pair of iron strips called clouts. The bottom clout would understandably wear faster than the top clout. Developing a system that would increase the durability and reduce maintenance in this area became a priority for many builders. Ultimately, the cast thimble skein (a hollow metal cone tightly fitted over the axle end) replaced clouts and became the system used by virtually all makers using wooden axles.

Parties wishing to purchase Thimble Skeins should by all means buy chill-hardened Skeins, such as manufactured by Hall, Kimbark & Co., without extra cost. They are bestowing unusual attention upon this branch of manufacture ; their object being to introduce the best article, without aiming to compete in price with brands of those inferior in quality and weight. Their sales of Skeins last year amounted to ten thousand sets, principally to wagon-makers and dealers who are fully competent to judge of their merits.

Their stock is at all times the largest, perhaps, of any similar business in the North-West. The efforts of this firm to supply the North-West with the best articles in their line at the lowest prices, entitle them to the confidence and patronage of dealers generally. It has been their purpose to stand between the manufacturer and the dealer and consumer. How well they have succeeded, an appreciative public have fully demonstrated by their very liberal patronage.

Our readers who are interested in hardware will please refer to the advertisement of Messrs. Hall, Kimbark & Co., to be found in another column. Messrs. H., K. & Co. are also agents for Burke & Barne’s Salamander Safes. and Queen’s Portable Bellows.

It is one of the best evidences of the commercial success of the well-known heavy hardware firm of Hall, Kimbark & Co., that they have issued a Descriptive Catalogue of their stock in an elegant bound volume of over three hundred pages, profusely illustrated, printed on tinted paper, and published in the very best style of book-making. In addition to the space devoted exclusively to their own business, an appendix accompanies the work, giving various prominent facts connected with the metals, directions for seasoning and preserving timber, tables of the weights and values of metals, and money and measures of all countries. The work has necessarily been a very extensive one, but it will be a very welcome gift to the patrons of the house, as it will enable them to select from their stock without the expense of travel or the delay of correspondence. 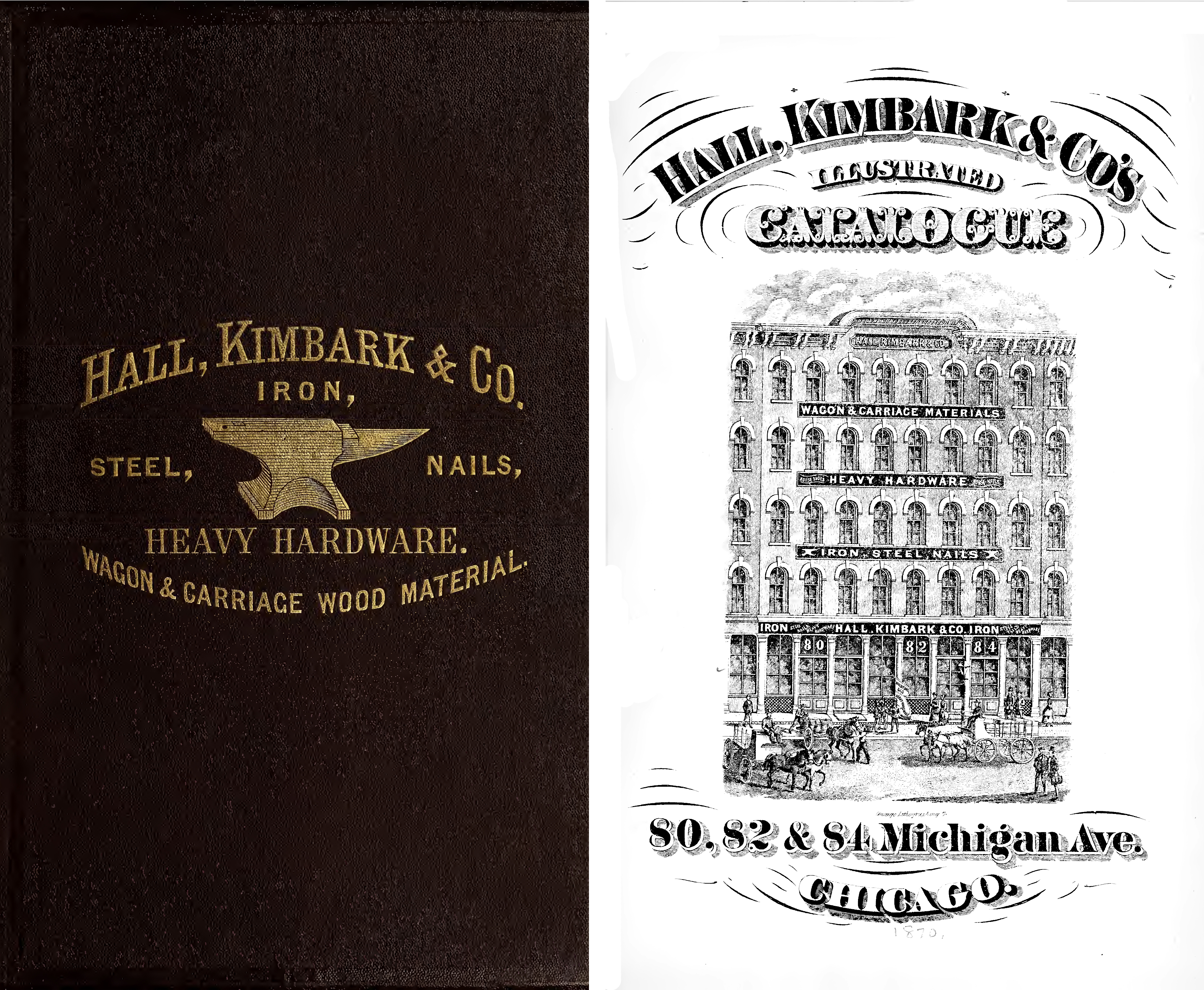 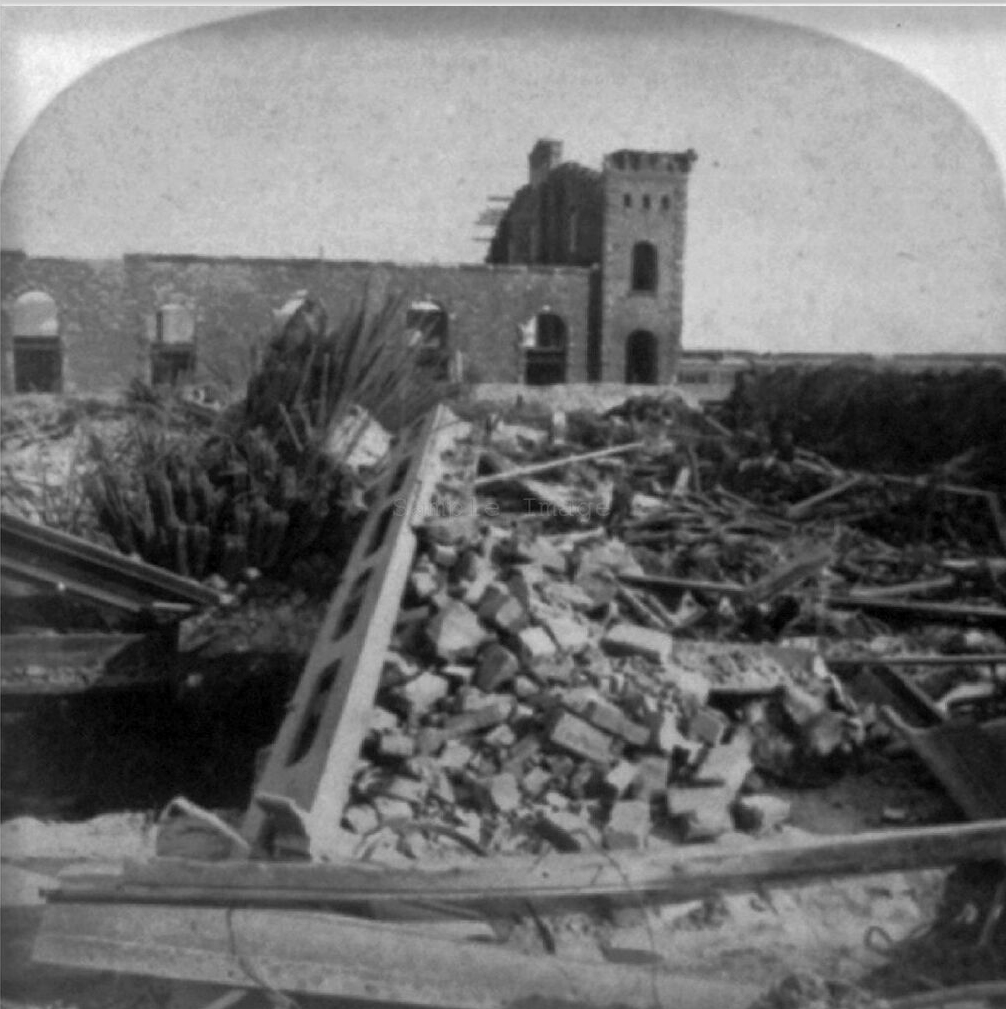 A Biographical History With Portraits, of Prominent Men of the Great West. Illustrations in Steel, 1894

SENECA D. KIMBARK
Seneca D. Kimbark is one of the pioneers of the great iron and steel trade in Chicago, having been actively engaged in that business since 1853.

Mr. Kimbark is a native of New York State, born at Venice, Cayuga county, March 4, 1832. His education was a thorough one for those days, and was obtained by his own efforts. After graduating from the district school he attended the Geneseo and Canan daigua academies, and at the age of seventeen paid his tuition with money earned by teaching in the country schools. When he was eight years old, his parents moved to Livingston county, N. Y., and four years later he was set to work on his father’s farm . With the exception of the time spent in attending and teaching school in the winter months, he worked on the farm until he was twenty -one years old, or in the autumn of 1852, when Mr. Kimbark celebrated the event by removing to Chicago, where be engaged in the iron business, and soon became junior partner of the firm of E. G. Hall & Co. in the iron trade. In 1860 the firm name was changed to Hall, Kimbark & Co. In 1873 it was changed to Kimbark Bros. & Co., and in 1876 S. D. Kimbark became the sole proprietor of the im mense business. In the great fire of 1871 he was a heavy loser, but his business energy and tact brought him through difficulties that would have permanently hampered men of less courage and sagacity, and to-day his establishment is one of the largest of the kind in Chicago. During all the years since its founding, in 1853, its commercial integrity and high standing have been preserved. Some years ago Mr. Kimbark estab lished a large factory for carriage woodwork in Michigan, which was, in 1891, removed to Elkhart, Ind., where conditions were more favorable. It is now one of the largest and most successful factories of its kind in the United States. The factory proper is two stories high, 400×80 feet, and the engine house and bending room is 180×40 feet. Both are equipped with the finest machinery in the trade, most of which is original. In all his business career Mr. Kimbark has worked hard for the best interests of the iron trade, and his voice is potent for good in national assemblies where the iron interest is made a subject for investigation. His notions of business honor are so broad that never makes a distinction between commercial and moral integrity and the “tricks” of the trade have never found a place in his transactions. 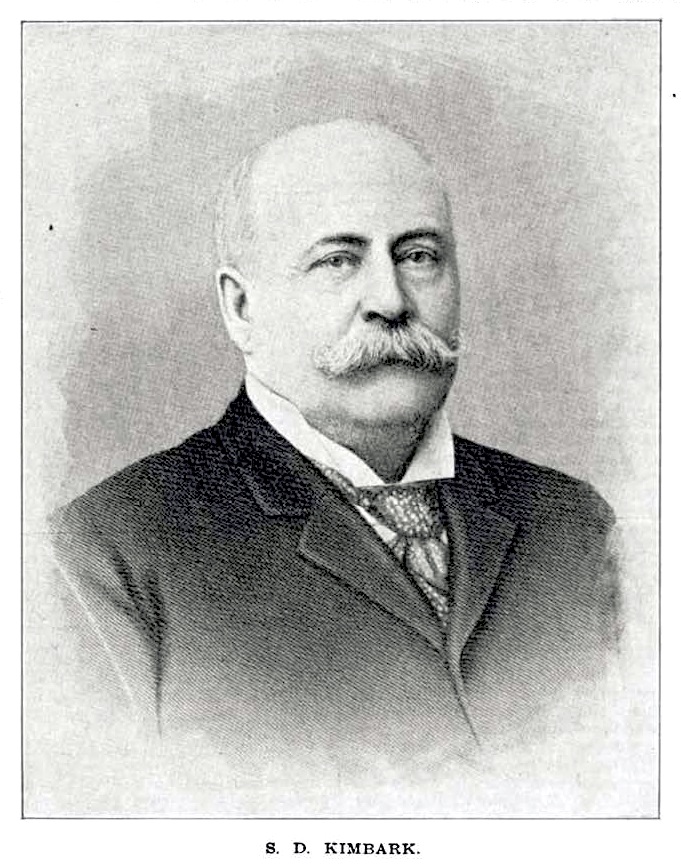 Mr. Kimbark was one of the three commissioners appointed to locate the South Park system, and it was fortunate for the future of Chicago that such a man was embraced in the commission. The park was located upon his notions of future necessity, though it is just to state that the other commissioners were in full accord with his views.

Mr. Kimbark is in no sense a politician, but takes an active interest in every question of municipal reform. While he is a Republican he is not a partisan. In his early life he was a Democrat, and was a warm advocate of the annexation of Texas. The repeal of the Missouri Compromise, however, made him an ardent aboli tionist, and on the formation of the Republican party he became actively identified with it . While one of his partners was in active service in the field, during the civil war, his brother, George M. Kimbark, at that time also a partner, was engaged in the organization of volunteer companies, notably the “Kimbark Guards.” The business of the firm of Hall, Kimbark & Company was meantime conducted by its senior members, Elbridge G. Hall and Seneca D. Kimbark, and furnished its full share of the sinews of the war which saved the Union and the Constitution . Mr. Kimbark has always refused all tenders of political preferment, and declined many nominations offered him .

He is a man of kindly and hospitable impulses. He has a charming home circle, and is also prominent in Chicago’s club history. He has been identified with the Union League Club almost since its organization, and has taken a lively interest in its affairs and advancement. He was one of the original members of the Chicago Club, a charter member of the Washington Park Club, and an influential member of the Calumet Club.

Mr. Kimbark was married September 25, 1856, to Miss Elizabeth Pruyne, daughter of Peter Pruyne, at one time State Senator of Illinois, and a colleague of Stephen A. Douglas. Mrs. Kimbark’s mother is a widow of the late Thomas Church, one of Chicago’s pioneers, and a man of great personal worth. Mrs. Kimbark is one of Chicago’s oldest daughters, whose birthday was inauguration day of its first mayor. She is a woman of good attainments, genial presence and engaging manners. Her name but seldom appears in current society news or in connection with public institutions; but her charities have been generous and con tinuous, and bestowed by her own hand. Four children have been born to Mr. and Mrs. Kimbark—two daughters and two sons. The eldest son, Charles A. Kimbark, is now financial manager of his father’s business, and a young man of great promise in the business world . The younger son, Walter, of equal promise, is at the head of the carriage goods department of his father’s establishment. Mr. Kimbark’s younger brother, Daniel A., who was a member of the firm of Kimbark Brothers & Company, died March , 1836. He came to Chicago at the close of the civil war, and up to the time of his death was identified with the above named house. Prior to 1882 he held office in the Apollo Commandery, Knights Templar , of Chicago, in which he had a host of warm personal friends; but ill health forced him intu comparative retirement. He married, in 1861, Miss Eliza Underwood, of Auburn, N. Y., who, with five sons, survives him .

The history of Seneca D. Kimbark is not an unusual one in Chicago, and yet it can be read with profit by all young men. It is a record of a poor country boy, who by pluck, integrity and steadfastness of purpose and business ability has become one of the most influential and successful merchants in a great city. He has attained wealth and position, and is honored and respected wherever his name is known.