History of Chicago; Its Commercial and Manufacturing Interests and Industry, I. D. Guyer, 1862

The Art of Bookbinding.
Ancient books seem always to have been preserved in rolls. They were merely groups of leaves in thin skins, or some kind of vegetable membrane. The bookbinder’s art was a very primitive one. He had only to paste or glue the leaves together, thus forming an extended sheet, to which he attached a cylinder, around which the scroll was rolled. Even in our times it is customary, in oriental countries, to write on strips of vellum, sewed together in one continous sheet, with rollers at each end, clasped with silver and gold. The square form of binding, which was so great an improvement, was not adopted until after the Christian Era. Long before the art of printing was introduced, book-binding had reached perfection, and very many illustrated missals and MSS. of the Middle-Ages are still preserved in the great libraries of Europe, in binding which has never been surpassed in durability, artistic finish and taste. It is only within the last few years, that the art of book-binding has been carried on in its most advanced and beautiful forms in this country; but the display which is made in the leading American book-stores and libraries, is fully equal now to the same sights in Europe. With the growth of the business, the art has not only advanced in every department, but the cost of book-binding has been very materially reduced, while the process of the work has been greatly shortened. In this city, men of wealth and taste can procure their rare volumes bound in accordance with the true principles of the art that is, to adapt the style of the covering to the contents of the volume.

As a manufacture, modern book-binding is distinguished for the extent to which machinery has been employed, and the consequent rapidity of production. Medianism is applied to block-gilding, blind-tooling, and embossing; hydraulic presses are used instead of old wooden screw presses; cutting machines of modern manufacture, supersede the plow; cutting tables with shears are now used for squaring and cutting mill boards for book corners; and machines have recently been invented for backing and finishing. The binding of BLANK BOOKS is a distinct but important branch of the general trade. In the manufacture of Account Books, foreigners acknowledge that Americans excel all others; and those who are conversant with the best workmanship executed in this city will acknowledge that our makers are not surpassed by any. Every variety and description of Blank Books for merchants, and blanks for public offices are made here, from the cheapest to those distinguished as indestructible, which are bound in Russia, paneled, and edged with brass. The leading establishments employ the most improved machinery, and no expense is spared to expedite and cheapen the process of manufacture.

Mr. CYRUS J. WARD, has at No. 136 Lake Street, the largest and best conducted establishment in Chicago. There are none where more volumes are turned out, none where the work is done more substantial, or in finer taste. His facilities are such as to embrace every kind of binding, from the plainest muslin to the richest and most elaborate styles, while in his Blank Book department none excel him, as his conveniences are such that he can equal, if not exceed, any other establishment in the binding of all kinds of Railroad Blanks, County and Mercantile Blank Books, of every description.

He is master of his business, devoting his whole time and best talent for its development, and making prices to suit the times, his manufacturing rooms present a scene of busy life. This is one of the expanding arts now, in all countries where the Press is unshackled. With the perfect liberty it enjoys with us, the increased number of volumes to be bound every coming year will amount to millions. The increasing taste and demand for schools, private and public libraries, the increased number of readers for every volume, and the rapidly growing taste for reading and intelligence, will call for a constant improvement in the art of book-binding, to meet the exigencies of a great and well educated people.

The binders of this city have peculiar advantages in being able to procure many of the requisite materials direct from manufacturers in our midst; except book-binder’s muslin, which is made only by one house, Messrs. N. M. Abbott & Co., New York city. The very best Morocco that can be obtained, and Marble Paper are made in Philadelphia, and Tar boards are supplied from New York.

The business of account Book-binding and Ruling in this city amounts to about $175,000, while the entire Book-binding including Blank Books, exceeds $350,000 as nearly as we can ascertain.

In New Quarters.—Francis Munson has for several years permantly in the stationery and blank book trade on Lake street. He has now removed to a newly-fitted and elegant store, No. 140 Lake street, one of the handsomest establishments of its class west of New York city. The depth of the store gives him extensive bindery premises in the year, on the same floor, with better facilities than he has ever before enjoyed in each department of his trade. His present stock is large and varied, and comprises a full assortment in the general line of stationery wares. The bindery department is unsurpassed in the city, Mr. Munson himself being a practical book-binder, and securing the means of the best workmen, and choicest material, specimens unexcelled in that line. He deserves his success.1 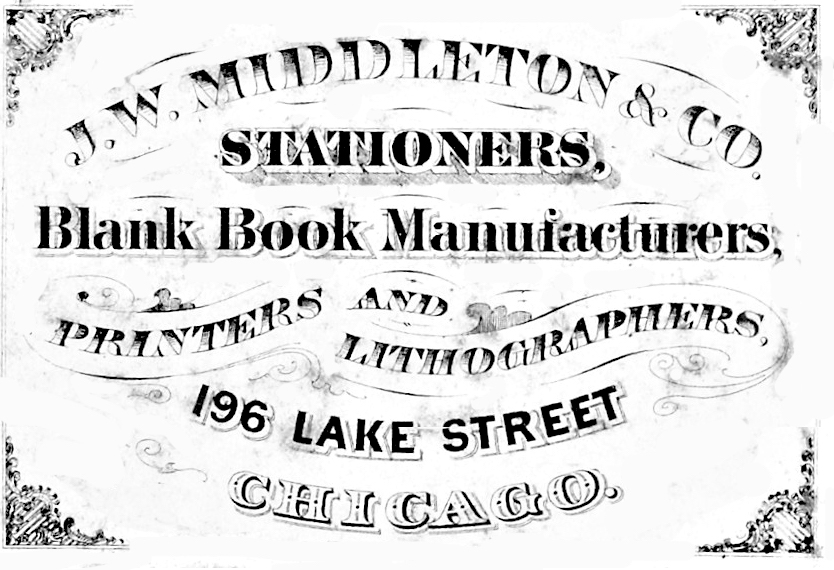 Northwestern National Bank.—We saw yesterday the blank-books, checks, and other stationery destined for the use of the Northwestern National Bank, about to be opened in our city, and they are exquisite specimens of artistic skill. The set of books is complete in number, of magnificent workmanship, in ruling and binding, and contain several unique improvements in the arrangement, of great business value. The certificates and drafts are splendidly lithographed. We noticed one lot of over a quarter of a ton of check-books. The whole series will form probably the best and most complete set of banking literature to be found in the city. They are the work of Messrs. J. W. Middleton & Co., No. 196 Lake street, and are but samples of the work constantly sent out from their establishment. They are paying particular attention to bank work, and we commend them to the regards of our banking friends who intend to renew the coming winter.

New Printing and Stationery Establishment.—We are pleased to notice the following endorsement of one of our new business houses by the New York Shipping and Commercial List:

We take great pleasure in commending to the notice and good offices of our friends in Chicago, the Printing and Stationery establishment of Messrs. J. W. Middleton & Co., No. 196 Lake street. who recently went from among us to locate permanently in the thriving City of the Lakes. Mr. Middleton was associated in business with us here many years, and we can, with the utmost confidence, recommend his house to all those who need anything in the line we have mentioned. We are certain that those who favor them with their patronage, will find them reliable, expert and prompt business men. We have appointed them our business agents in Chicago, and any orders for the Shipping and Commercial List entrusted to them will receive our immediate attention.

J. W. Middleton, manufacturing stationer, No. Chicago 55 State street, reports a large increase in all branches of his business, particularly in the demand for fine goods and special books for railroads, manufacturers, etc. The high character of the work turned out by Mr. Middleton always insures him a good share of patronage, but such an increase as he has enjoyed hos past year is remarkable—30 per cent—which is about the figure, speaks volumes for the house. It seems almost superfluous—in the face of the above fact—to say that all departments are well equipped. His facilities for doing printing in colors and engraving and lithographing of all kinds are first class. Supplying banks, insurance companies, railroads, public offices, and manufactories with special blank books forms a large part of Mr. Middleton’s business. His Excelsior copying books have a large sale, and the demand for them is constantly growing greater. In addition to his manufacture for commercial purposes, Mr. Middleton does much fine society printing and engraving, and carries a large stock and good assortment of fine stationery and fancy goods. Club and wedding printing and stationery of the most elegant designs and finest workmanship he makes a specialty.

J. W. Middleton.
Blank book manufacturer, printer, and stationer, 55 State street. This house was established at 195 State street in 1863, and for the past twenty-one years has been justly celebrated for the excellent quality of its blank books, printed work of every description, and stationery for office use. Bankers, manufacturers, and the mercantile public in all Western States and Territories here purchase their supplies in small or large quantities, and are happy because they get their money worth in good goods, so says The Inter Ocean, and from experience it produces its blank books from Middleton, and has found his goods entirely satisfactory in price and quality. Mr. Middleton always carries a full line of whatever goods one would expect to find in a first-class Chicago stationery house. He does not allow himself to be undersold.

Relics of Fort Donelson.—When the intelligence first reached Chicago of the fearful decimation and wounding of our brave soldiers on the field of Donelson, and the appeal was made for assistance in the care of the suffering and dying, our readers will remember how eagerly our surgeons and citizens volunteered, and how gratefully these offers of assistance were received. Among the first to reach the Fort, was our friend, Francis Munson, Esq., 140 Lake street. O his untiring and unselfish efforts in the care of of our wounded braves, the recipients of his attentions and the surgeons in charge speak in terms of admiration. Regardless of personal and business considerations, he remained at Donelson until his efforts were no longer needed in that direction. On his return he succeeded in securing a large number of articles trifling value of themselves, but as souvenirs of the battle-field, priceless. These consist in part, of overcoats, made of heavy cotton jeans, such as a are furnished the soldiers of the C.S.A. at a cost of $10—knives of every description—arms and fragments of arms—guns—ammunition—the pistol from the torpedo sunk in the Cumberland which was to annihilate Commodore Foote and the gun boat fleet, rebel documents, &c., all of which are appropriately labeled and arranged with excellent taste in a show-case in his store, where they are arts of admiration not unmixed with a certain undefinable sensation of awe on the part of numerous visitors. The curious will find them well worthy of inspection.2 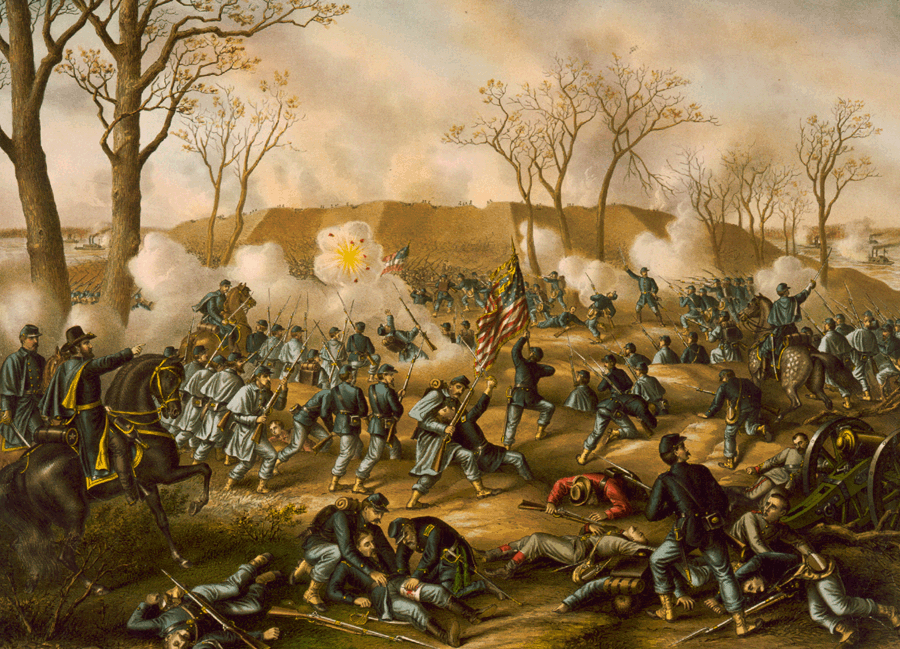 The capture of Forts Henry and Donelson were the first significant Union victories in the war and opened two great rivers to invasion in the heartland of the South.