The management of the new and beautiful suburban cemetery of Graceland, visited a pleasant surprise upon that very large share of our public who crowded their free excursion trains yesterday. It was announced, that “Graceland Cemetery” was to be dedicated, and though the announcement was sufficient to draw a large attendance, too large, indeed, not to require an abandonment of the earliest proposed means of conveyance, still we are of the opinion, that few of the multitude had a previous adequate idea of the completeness to which the preparations for dedication have been carried.

Graceland is a tract of seventy acres, lying upon and east of the Green Bay Road, about one mile and a half beyond the point where the Lake View road diverges from it, and two miles beyond the city limits. The natural topography of the grounds is admitted by all to be peculiarly beautiful – the gentle undulations and the grove of old trees over the entire subdivision, having suggested the appropriate name.

The Company is incorporated under the express Cemetery statute of the State. The officers are elected annually by the lot owners. The present Directory consists of Wm. B. Ogden, Esq., E. H. Sheldon, Esq., and Dr. S. Sawyer. Geo. P. A. Healy, (the artist), is Treasurer, and Thomas B. Bryan is President. The grounds are laid out and improved under the counsel of Wm. Saunders, Esq., the eminent Landscape Gardener, of Philadelphia, by Swain Nelson, of this city. Improvement commenced in April last. Purposely and in pursuance of their plan, little was allowed to transpire through the public press until nearly the present advanced stage of the enterprise, when the attention of the public and their lively interest was abundantly manifested by thye large attendance yesterday.

The Company made arrangements with the Chicago and Milwaukee Railroad Company. whose line runs about a mile west of the Cemetery, to run excursion trains yesterday, free to the public, this being the only practicable means of meeting the demand, though the ordinary and usual access to the Cemetery will be by the regular omnibus line connecting with the terminus of the North Chicago Railway line.

The Cemetery is thus a pleasant drive or ride of about two miles beyond our city limits, along a thoroughfare which at no distant day will be lined by the suburban residence of our citizens, there not being a foot of waste land, undesirable for such improvement throughout the whole distance from the river to Graceland.

We followed the Green Bay road route yesterday, by private conveyance, the better to observe the advantages above referred to. Arrived at the Cemetery we found a large gathering of our citizens and residents of that vicinity.

The grounds are enclosed and the broad graveled roads and winding paths among the trees are all finished. The entrance to the Cemetery is through a massive and characteristic stone structure, a gateway, with large waiting-rooms at either hand. Quite a number of lots have already been purchased and improved by well known citizens, and the sale of lots will take a fresh impulse from this point.

By a regulation of the Company, the only enclosure allowed to lots will be some variety of the hedge, and nothing in wood or iron will be allowed. This will secure a peculiarly charming effect to the improvements of the grounds. In reference to the fitness of the locality for interment purposes, the following from Messrs. S. S. Greeley and Edmund Bixby, surveyors of much repute, is of value and the best testimony that could be asked upon the point:

We have taken levels over the surface of Graceland Cemetery, and find the minimum height to be 17 feet, and the maximum height to be 25 feet above the present stage of water in Lake Michigan; most of the ground being over 20 feet above, which is four times the usual depth of graves.

The nearest Cemetery without the city limits, the easiest of access, and by the liberal terms of its managers in price of lots, as well as by the other necessary incidental expenses of interment, Graceland is placed within the reach of every class of our residents. It can be reached, and that on the best road leading out of Chicago, by funeral corteges directly from the city, at an expense but moderately in advance of that required in interments in the old Cemetery. 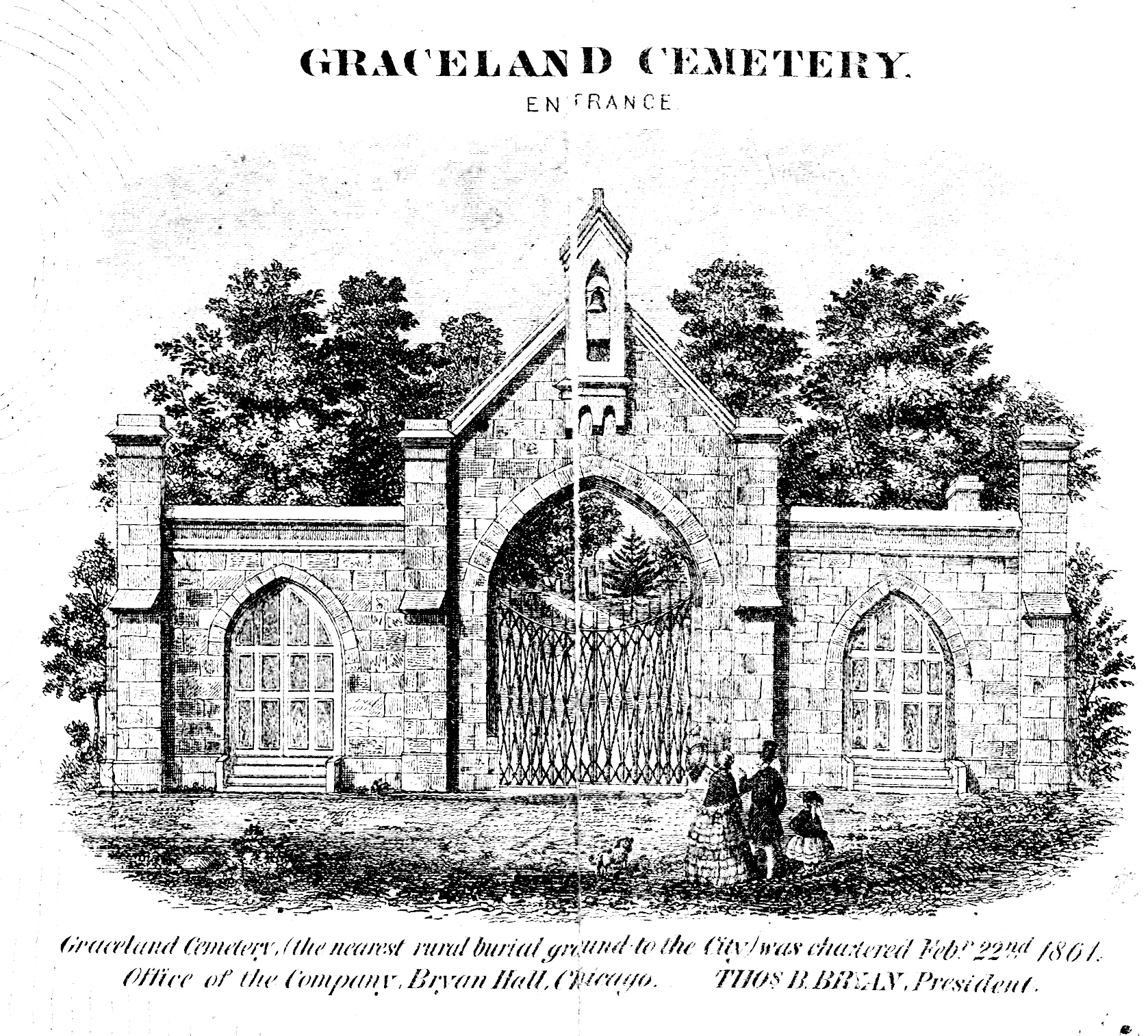 From History of Chicago by Andreas, 1884

GRACELAND CEMETERY.
Graceland Cemetery was founded in 1861 by Thomas B. Bryan, who purchased eighty acres of land, 5-1/2 miles from the center of the city, on rising ridges near the lake shore. Since then, various additions of land have been made and the cemetery became the second largest cemetery in the country, with Greenwood Cemetery in New York being the largest.

The first board of managers was composed of William B. Ogden, Sidney Sawyer, E. H. Sheldon and George P. A. Healy. The grounds are improved in much the same manner as those at Rosehill—there being several natural springs, from which water for irrigation and supplying the artificial lakes and fountains is drawn by steam pumps. The grounds are superbly ornamented with rare vases, beautifully designed statuary, noble monuments and handsomely kept walks, terraces and flower beds. The cemetery is reached by steam and street-cars and the lake shore boulevard drive. There have been 40,000 interments to date. The same charter provision as in the case of the Rosehill company, for a perpetual improvement fund, applies to the Graceland Corporation. Ten per cent, of the gross receipts from the sale of lots is set apart, and draws compound interest, and insures the perpetual maintenance and preservation of the cemetery.

Graceland can be found at 4001 North Clark Street. 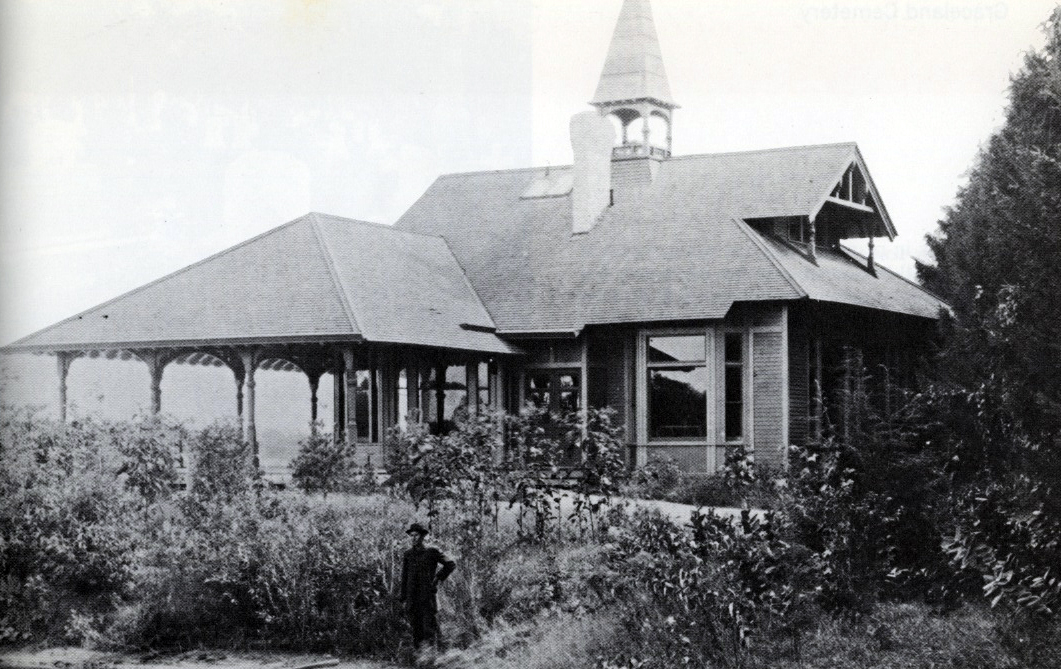 Office and railway station at Graceland Cemetery in 1883. It had ceased to function as a passenger station in 1917.

There were actually two St. Paul Graceland station houses—a dark brick structure on the east side of the tracks and a second clapboard station house on the west side, partially on cemetery land. This building was demolished around 1967. 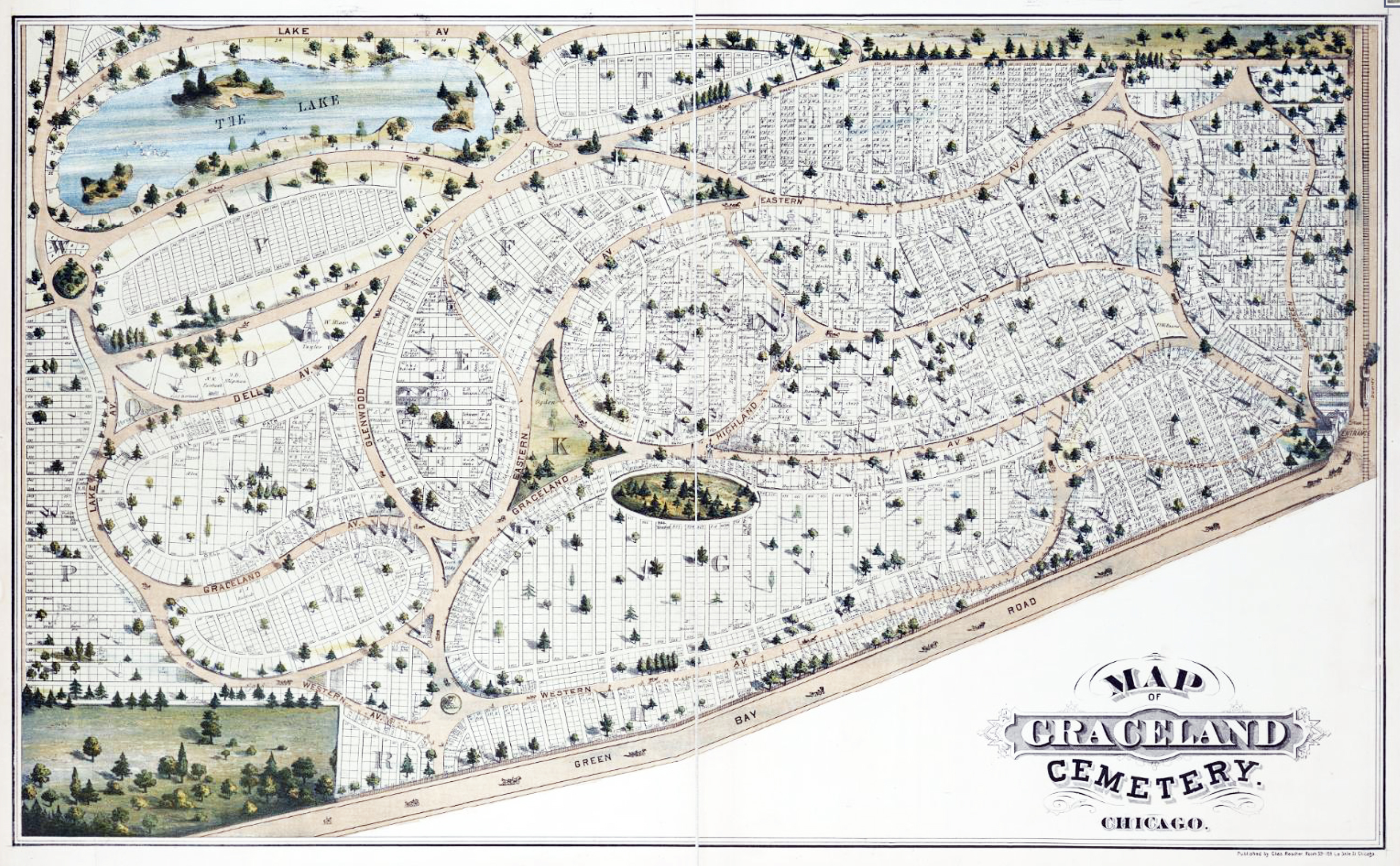 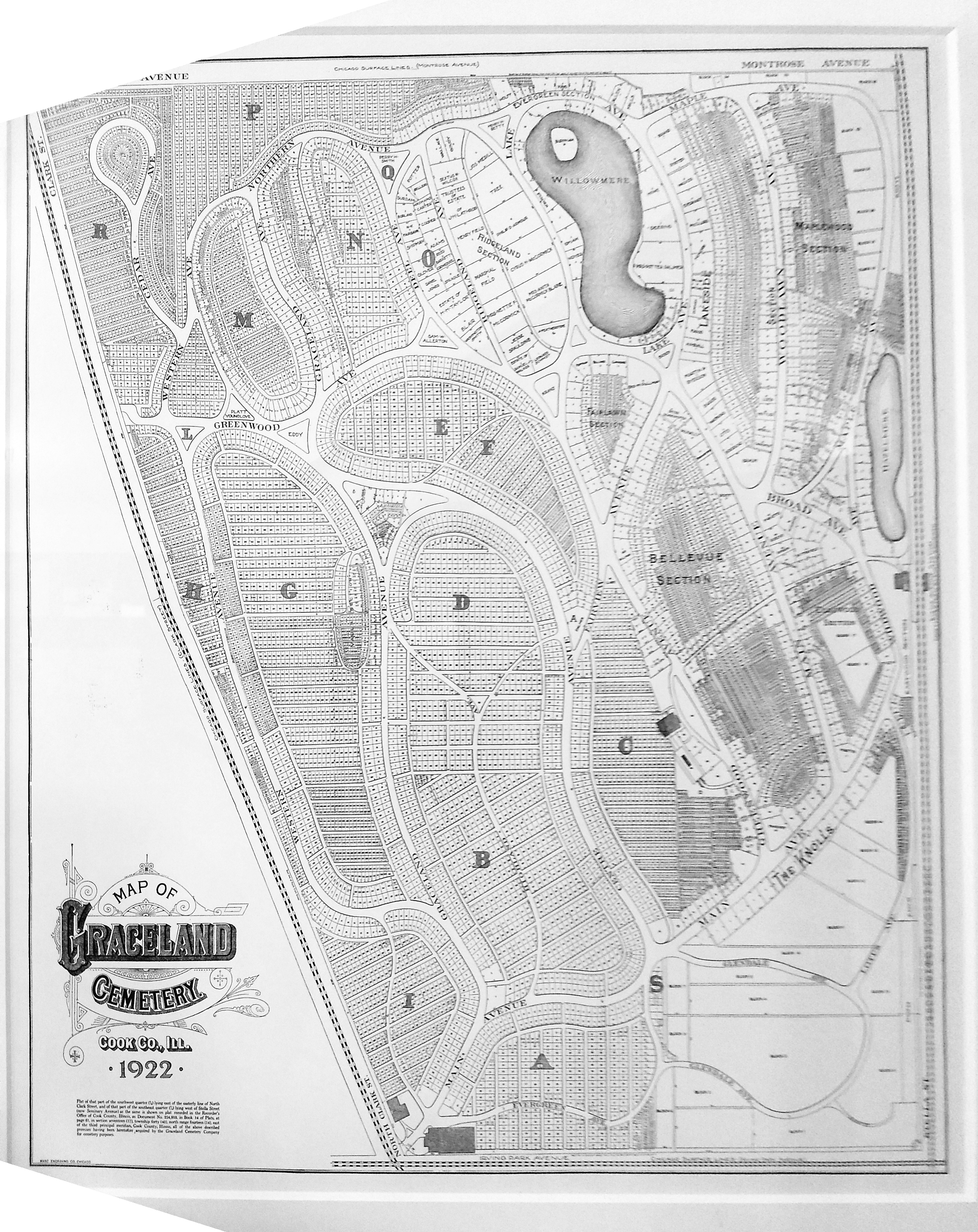 GRACELAND CEMETERY
Renowned as much for its architecture as for its famous dead, Graceland is probably the most celebrated cemetery in Chicago. Works of sculptors Lorado Taft and Daniel Chester French are on public view. Buried here are politicians and philanthropists, architects and inventors, merchants and entrepreneurs. The list includes John Kinzie, the first permanent white settler in Chicago;