CEMETERIES.
No stated place for the burial of the dead was located until 1835. In early times each interment was made on or near the residence of the friends of the deceased. Later, the settlements about the forks had a common acre on the west side of the North Branch, where the dead were buried. The dead from the fort were buried generally on the north side of the main river east of Kinzie’s old house, near the lake shore. There John Kinzie was buried in 1828.1 The soldiers who died of cholera in 1832 were interred near the northwest corner of Lake Street and Wabash Avenue. Early interments were made all along the borders of the two branches, wherever settlements had been made and deaths had occurred. In later days the forgotten graves were often opened in excavating, which has led to much speculation as to whom the disinterred remains belonged. As late as March 12, 1849, the Daily Democrat records the fact that during the spring freshet, “two coffins were seen floating down the river, supposed to have been from some small burying-ground on the North Branch in the Wabansia addition.” August 15. 1835, the town surveyor was ordered to lay out two tracts suitable for cemetery purposes; sixteen acres on the South Side and ten acres north of the river. These two lots, the first established cemeteries in Chicago, were located as early as August 26; on the North Side, near Chicago Avenue, east of Clark Street; on the South Side near the lake shore and what is now Twenty-third Street. These lots were fenced in September, and burials forbidden elsewhere within the town limits.

The Chicago Cemetery was to close in 1865. The City of Chicago passed an ordinance that cemeteries were to be located outside the city into rural areas that surrounded the city. 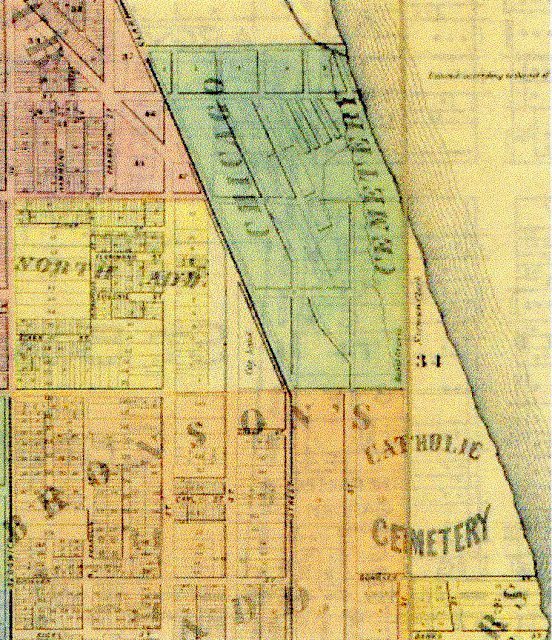 CHICAGO CEMETERIES.
Let us turn for a time from the few brief years, crowned with riant life and activity, which have made up the wonderful past of Chicago, to that other great city where reigns voiceless silence and eternal peace. The virtues and achievements have been sounded of many who were identified with the city’s rapid rise to prosperity; whose very bones have been crowded from their resting-place by the encroachments of the queenly city of their pride and early hopes, to find anew some distant, still abode, that now again lies almost within sound of her busy, restless life. This chapter must be limited to a mere recital of facts regarding the burial of the city’s dead, for space will not admit of any extended description of the natural beauties and artificial improvements of the many cemeteries adjacent to Chicago.

An account of the laying out, by the town authorities of Chicago, in 1835, of two cemeteries—on the North and South sides, respectively—is given in the first volume of this history (above). The northern half of the plat so set apart on the North Side was used as a place of sepulchre by the Protestants, while the southern portion became the first Catholic burying-ground in the city.

THE FIRST GRAVE-DIGGER—in Chicago was Henry Gherkin, one of the early settlers.

HENRY GHERKIN was born in Hanover, near Bremen, in Prussia, September 1787 and educated in Bremen. In 1823, he was married to an English lady, who died in New York, as also did their three children, of cholera. During the following year, Mr. Gherkin moved west to Buffalo, where, in 1834, he was married to Miss Mary Spechar. In 1830, he came to Chicago, where he was of great use, to both Germans and Americans, as an interpreter. He made a business of grave-digging, and, as has been said, was the first regular grave-digger in Chicago. In addition to this occupation, Mr. Gherkin was a market-gardener, supplying vessels and steamers on the lake, and was popularly known as “Dutch Henry.” He died in July, 1877, at the good old age of ninety years, having ceased to dig graves in 1854.

THE FIRST UNDERTAKER in Chicago was an Englishman, named A. J. Bates, and he also owned the first hearse. He was succeeded by the firm of Gavin & Gehr, one an Irishman and the other a German.

No interments were made in the South-side grounds after 1842. About 1847, the city authorities re-interred the bodies from the South-side burying-ground in the Lincoln-park tract, known as the Chicago Cemetery.2 The Chicago Cemetery tract contained altogether three thousand one hundred and thirty-six burial lots, and was designated, under the old survey, as the “Milliman” tract. By a decision of the Supreme Court, the city lost the title to the Milliman tract, and, not being able to perfect or obtain the title, the Common Council, in 1865, ordered the vacation of the tract, authorizing lot-owners to exchange their lots for lots in any of the new cemeteries, of equal size and of their own selection. Graceland, Rosehill and Oakwoods had, at this date, been established.

When the time allowed the city to vacate the tract (two years) had expired, a special committee, appointed by the Common Council, consisting of Aldermen Woodard, Wicker and Lawson, made the selection for about two hundred lot-owners who had not made any selection and could not be found. The committee selected lots, of equal size and in the best obtainable location, in that portion of Oakwoods known as the “Third Division, Section B,” where the bodies were re-interred in precisely the same order as they had been in the Chicago Cemetery. The city holds the title to the whole tract purchased in Oakwoods, and any of the owners of the lots so exchanged were given the privilege of obtaining a deed to the new lot upon execution of a release of the old one. After several years of litigation, the portion of the old Chicago Cemetery included in the present limits of Lincoln Park passed under the control of the park commissioners. Joseph H. Ernst, of No. 271 North Avenue, was the sexton of the Chicago Cemetery for a number of years and had charge of the exhumation of the bodies.

Chicago’s old cemeteries are an interesting part of the city s early history, when our great metropolis was a lusty, squawling infant. Before Chicago was incorporated as a town in 1833, interments were made on or near the residences of the friends of the deceased. In later days, graves long forgotten often were opened by accident in excavations for new buildings. As late as March 12, 1849, the Chicago Daily Democrat reported that “during the spring freshet, two coffins were seen floating down the river.”

Such instances apparently provided the impetus for the founding of formal cemeteries. In 1835, the town surveyor was ordered to lay out two tracts suitable for cemetery purposes-one for Catholics at 23rd and the lake, where McCormick Place now stands; another for Protestants at Chicago Avenue, east of Clark Street. Burial in any other part of the town was forbidden.

The town’s original burial places were only a temporary solution of the problem, and several new cemeteries originated within the next few decades. The property for Calvary, Chicago’s oldest existing Catholic cemetery, was purchased in 1851.

In 1866, a grave could be purchased at Calvary for $5. There was an additional charge of $2 for digging it.

Evanston’s First Mass
There, in 1865, the first Mass ever offered in Evanston was celebrated in a grove of oak trees, with a kitchen table for an altar. The celebrant was late because his horse and buggy mired in the heavy sand of Chicago’s north shore. Only one train—a funeral train—ran on this particular Sunday in August, making the trip from the city to Calvary in the good time of one hour.

The burial records of Calvary list many of the names of people who built the city and helped make Chicago great. It is the burial place of Gov- ernor Dunne and three mayors-John P. Hopkins, William E. Dever and Edward J. Kelly. Here, also, are the final resting places of four Catholic Bishops.

Cemetery Traffic Problems
Chicago traffic, even in the cemetery, was already a problem around the turn of the century. Writing “in a kindly spirit” in the early 1900’s, a lady visitor sent this plaintive message to the superintendent of Calvary:

No automobile should be allowed to proceed inside Calvary faster than a healthy person can walk. The people on foot should not be obliged to jump and run to save themselves and swallow the clouds of dust caused by the racing.

Presumably, since she did not belabor the point further, the aged and infirm were fair game for the mechanized sportsmen of the day.

About 1895, some people were expressing concern over the “endless repetition and stereotyped patterns” of floral offerings for funerals. Some of the sentimental favorites of the time could flood the tear ducts of the most jaundiced eye at the wake . . . “Gates Ajar,” “The Broken Column,” and “The Unstrung Harp” (available with gold-or silver wires).

Adventurous Undertaking
Before the advent of the auto, travel to outlying cemeteries was an adventurous undertaking, either in chartered street cars or horse buggy. The street cars had a rather ingenious casket compartment which was recessed into the side of the car, permitting the deceased to ride along with the mourners. If the motive power of the cortege was equine, the casket travelled in a horse-drawn hearse.

Around 1915, when Oak Forest in winter was practically a roadless wilderness, the local undertaker used a sleigh to bring caskets into Mt. Olivet cemetery.

A trip to the cemetery in the “good old days”—especially in the biting cold of winter—frequently was an all-day affair. Many elder citizens recall the ritual of pausing for a glass of spirits at taverns euphemistically known as “halfway houses.” This tradition could not be construed as a gesture of irreverence, they say; rather, it was an antidote to the peril of joining the departed prematurely.

1 His remains were taken to the North Side Cemetery in 1835. and again, in 1842, to Lincoln Park Cemetery, where they now rest.

2 As a matter of interest in this connection, it may be mentioned that Thomas R. Bryan secured the South-side tract and sub-divided it into lots, the principal street being Calumet Avenue. On every deed of lots on this street, Mr. Bryan incorporated a provision that the houses should be built one hundred feet back from the street line.