DRY GOODS.
The establishment of Cooley, Farwell & Co., at 42, 44 and 46 Wabash Avenue, is the oldest Wholesale Dry Goods Jobbing house in Chicago, and enjoys a reputation for honorable dealing, and every other requisite to make up a successful and popiilar house, which is not surpassed. 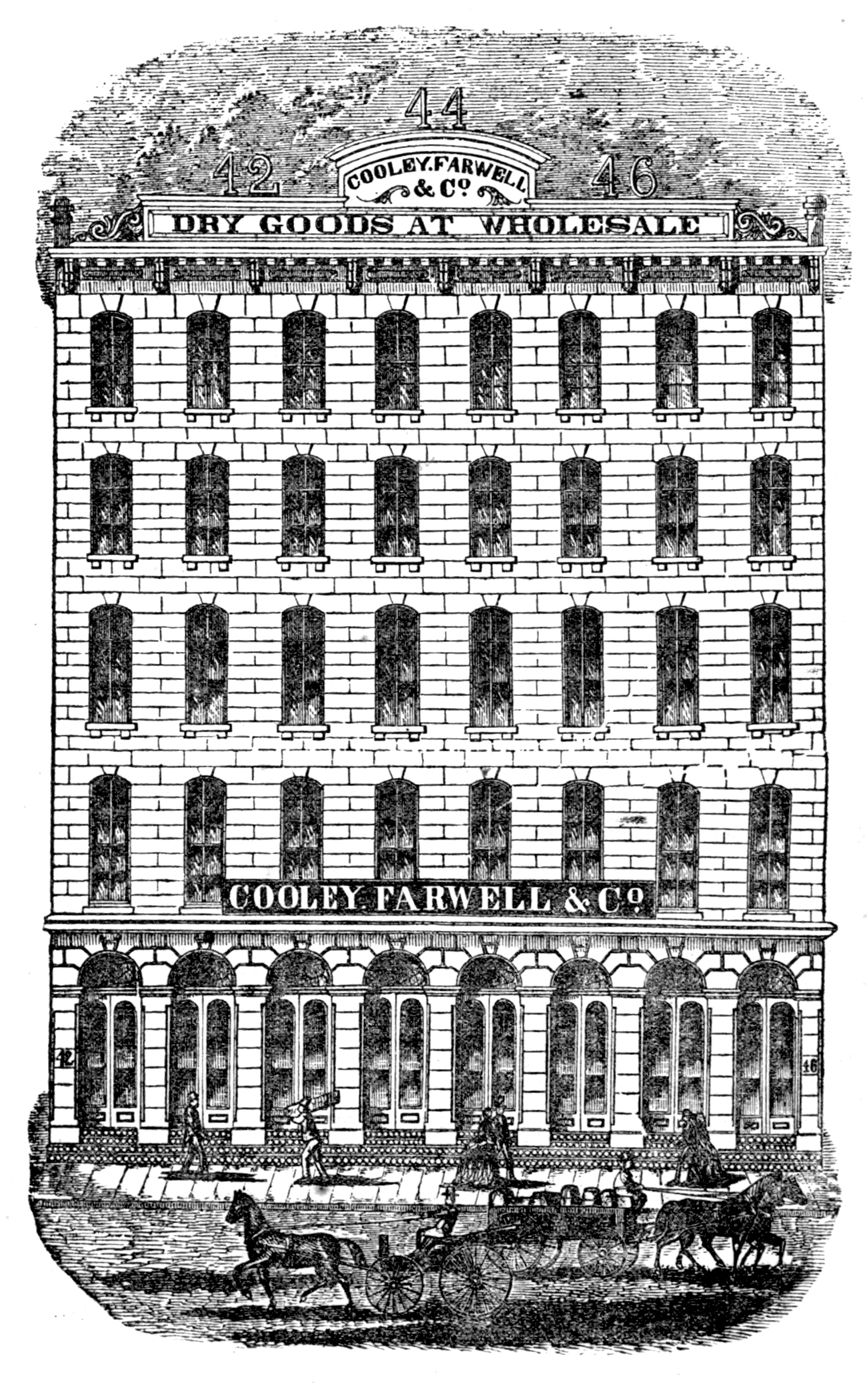 The cut, on the opposite page, represents their ware-rooms, which are constructed of Athens marble, covering a space of 60 by 120 feet, and six stories in height. Altogether, it is one of the most elegant and convenient structures for a dry goods jobbing business West of New York.

There is but few houses in New York which is now selling a larger amount of dry goods than Cooley, Farwell & Co., which is a very significant fact, both as regards the business ability of this firm, and the growing preference among Western merchants for buying goods at home. The probable secret of this, is, that they buy and sell for cash, and have their senior member of the firm constantly in the market to secure the best bargains.

The West has been burdened beyond endurance, in past years, by the abuse of the credit system, till experience as well as necessity has taught them that John Randolph’s “philosopher’s stone” “pay as you go” is the only sure guarantee for commercial prosperity.

We learn that this firm quite recently purchased the entire production of one of the largest print works in New England, for cash. Such facilities, in a financial view, will at a glance show any thorough-bred merchant, that they deserve the wide-spread reputation they have so well earned in the past, as successful merchants, and mark their house as the leading dry goods firm of the North-Western States. While the cash system is adhered to strictly in buying goods, we are informed that in fancy goods, notions, woolens, etc., short time is given for approved paper.

We see no reason why such houses cannot sell goods as cheap as any in New York Expenses are much lighter in Chicago, and freights on small bills are always higher than for large consignments; so that the retailer, in widening the distance between him and the source of his supplies, must necessarily increase the cost of his goods, when the home market is represented by merchants equally competent to command goods at the lowest prices from the manufacturers.

As before stated, the fact that they are making such large sales, is conclusive proof that buyers are satisfied that Cooley, Farwell & Co. occupy that position, and are determined to improve it in a practical way. Chicago, in a commercial point of view, by the energy and public spirit of such houses, is fast becoming what nature has destined here to be the metropolis of the North-West. Western States and Western men are beginning to feel a just pride in her prosperity, and patronage naturally follows such a state of feeling in the minds of all who hold commercial relations with her. This must continue to increase, as the untold natural resources, with which she is surrounded, (in a vast country, with a soil and climate of unsurpassed richness and salubrity, held firmly in its embrace with iron bands, radiating in every point of the compass), shall continue to be developed by the gathering millions that are seeking a home among us.

The wonderful growth of Chicago and her vast commercial influence is in no respect exhibited more forcibly yjan in the Dry Goods business. Clothing is equally necessary as food to the civilized man. Hence while by virtue of her position, Chicago forms the key to the Great West, and the enterprise of her merchants get hers its exhaustless products for the sustenance of the East and of Europe, she is also the depot whence are sent out all over that tributary region the material with which to clothe the great army of produces. Dry goods houses were located here in 1831, while as yet the tavern and grocery were their only mercantile concomitants. The trade has kept pace in its development, with that of other departments of commercial activity, and the Dry Goods merchants of Chicago now supply at wholesale the retailers of the whole North-western country. 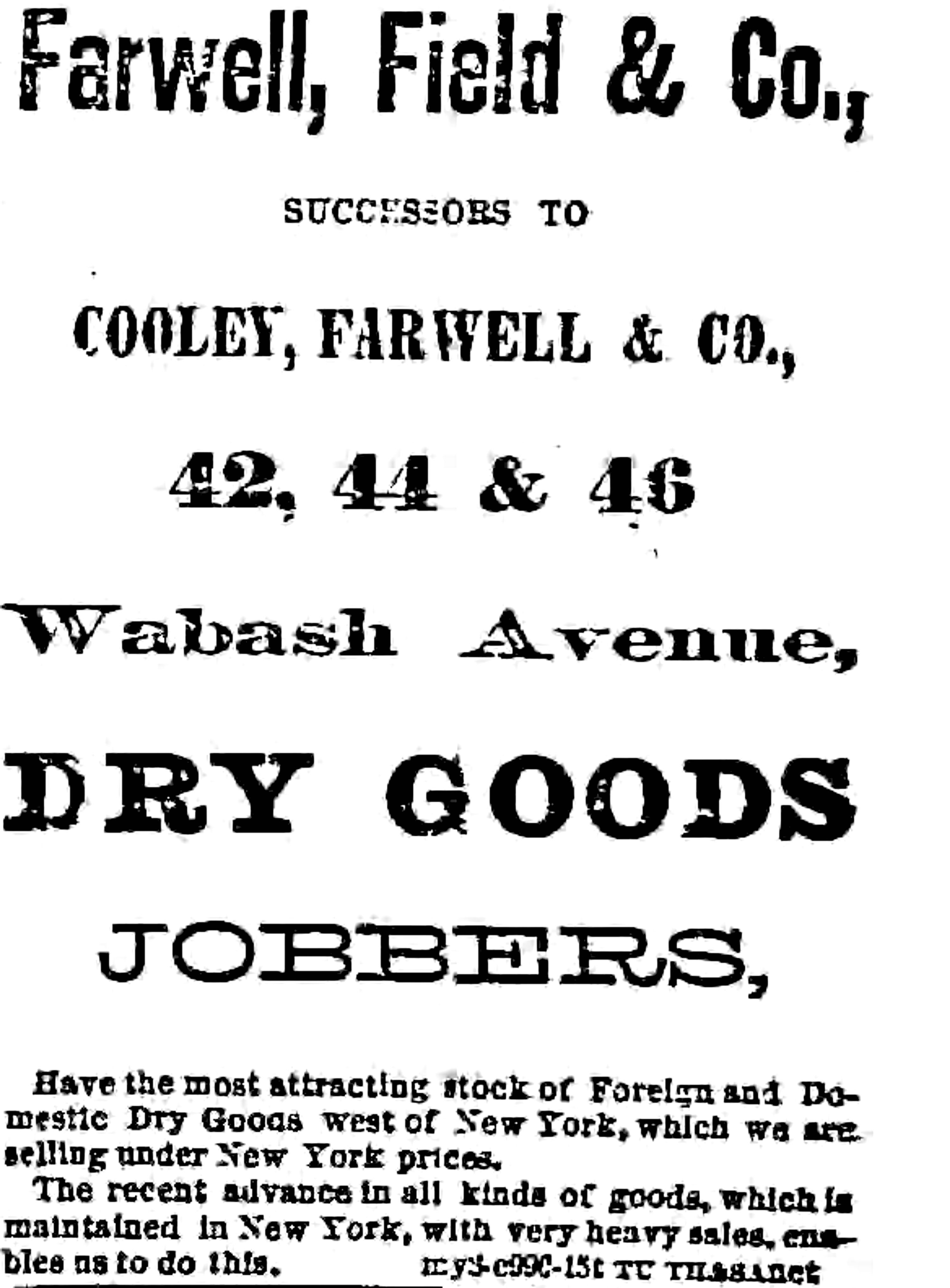 Prominent among these, indeed we may say “first,” stands the well-known house which till two days ago did business under the firm name of Cooley, Farwell & Co. For sixteen years it has led the van, having been the first exclusively wholesale trade of the city to its present magnitude. Seven years since the firm ventured on what was then considered a hazardous experiment—the erection of their present building on Wabash Avenue, south of Lake street, 120 feet by 60 feet on the ground floor, and six stories in height. It was not thought possible that enough of business could be done to fill or pay the expenses of such a large structure. But the wisdom of the firm has since been abundantly justified. The whole building is filled from cellar to roof, and the four large salesrooms are constantly thronged with buyers, while more than sixty clerks are kept thoroughly occupied in attending to them. It was an innovation in another respect; it was the first departure from the recognized avenue of trade, the only house south of Lake street. Now others are built or in progress, and ere long the busy commercial mart will doubtless extend itself far along Wabash avenue and other parallel streets.

The firm has been eminently successful in every respect. Previous to the breaking out of the war it had established itself on a firm wide basis; since that time it has extended mightily, and its sales during the past year have been almost fabulous in amount. The business of the firm extends all over the West, and reaches far into the South. Missouri, Kansas, Nebraska, Colorado and Minnesota are largely supplied with dry-goods by them, to say nothing of the more northern districts; and down the Mississippi goods bearing their mark are constantly passing. Their business has probably been increased eightfold since the beginning of the war. 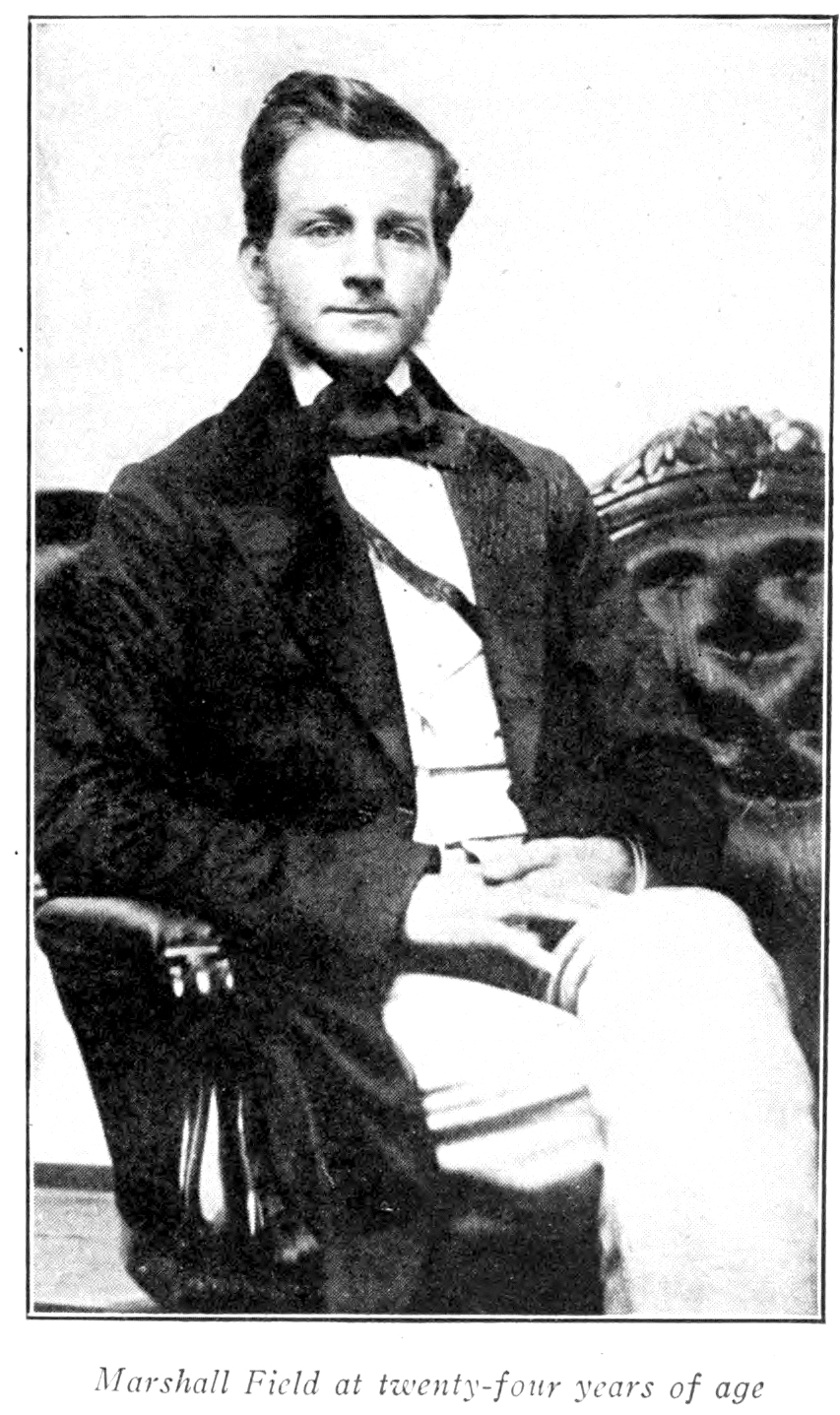 On Monday last the house was reorganized, Mr. Cooley retiring from the firm and leaving at its head John V. Farwell, a gentleman of whom it is impossible to speak except in terms of the highest praise, whether as member of a firm whose pre-eminence has been largely due to his clear-sighted sagacity, his energetic business habits as exhibiting the Christian virtues in his private life. Very few of those who have sided in the work, and been blessed by the labors of the Christian Commission, have any idea of the large amount of its efficiency which may be justly credited to John V. Farwell. This gift of $1,000 for the relief of the sufferers in the Libby, at Richmond, was a princely donation, but it was only one of very many munificent contributions to a holy cause. Sabbath School enterprises and works of home-charity have have all enlisted his sympathies and his purse has been opened to them. As President of the Mercantile Association he has entered deeply into the wants and abilities of the Mercantile community, and has contributed lavishly to every work taken in hand by that body, whether of a pure business nature, or relating to the raising, equipment, and comfort of soldiers, and the care of their families at home.

As a business man, Mr. Farwell needs no commendation. He has been connected with the firm ever since its organization in 1848, and has been a member of the firm for thirteen years. He has associated with him in the new firm Marshall Field, who has been identified with the firm for the past four years; S.N. Kellogg, a gentleman recently from St. Louis, with an active business experience of over twenty years in the dry goods trade in that city, and Levi Z. Leiter, who has occupied the position of cashier in the house for eight years past. The name of the new firm is Farwell, Field & Co.

The new firm is eminently a strong one in every respect, and will fully carry out the business extension inaugurated by its predecessors, enlarging the circle of its business relations taking in a still greater share of the public patronage, and occupying—if that be possible—a still higher place in the mercantile community. The dry goods dealers of the Northwest have cause for congratulation in the fact of possible business relations with a firm which so well combines the elements of long experience, extended connection, commercial integrity and public confidence, as that of Farwell, Field & Co.

CHICAGO DRY GOODS MARKET.
Since our last review the well known firm of Cooley, Farwell & Co., has been dissolved by the withdrawal of Mr. Cooley from it. The business, however, goes on as usual, under the name of Farwell, Field & Co.—Mr. Levi Z. Leiter, for many years cashier of the old firm, and Mr. S. N. Kellogg, formerly of St. Louis, entering with Mr. J. V. Farwell and Mr. Marshall Field as partners. Mr. Cooley was the buyer of the establishment, and he now retires from business altogether, a consummation he has desired for several years past. We have no doubt that the new firm will meet with that deserved success to which the old attained. The men are all merchants of known integrity.

THE DRY GOODS TRADE.
An Important Business Change.
The immense dry goods establishment of Potter Palmer & Co., which for years has maintained a controlling influence over the dry goods trade of the Northwest, and has been as familiar in the mouths of the ladies as a household word, opens to-day under the auspices of Messrs. Field, Palmer & Leiter. Where Mr. Palmer has left off, they will take up and go on, and we make no uncertain prediction in asserting that the same success which has crowned it in past years, the same careful attention to business, the same energy, and the same intuitive knowledge of the wants, as well as the same unvarying courtesy to customers, will mark the administration of the new firm. 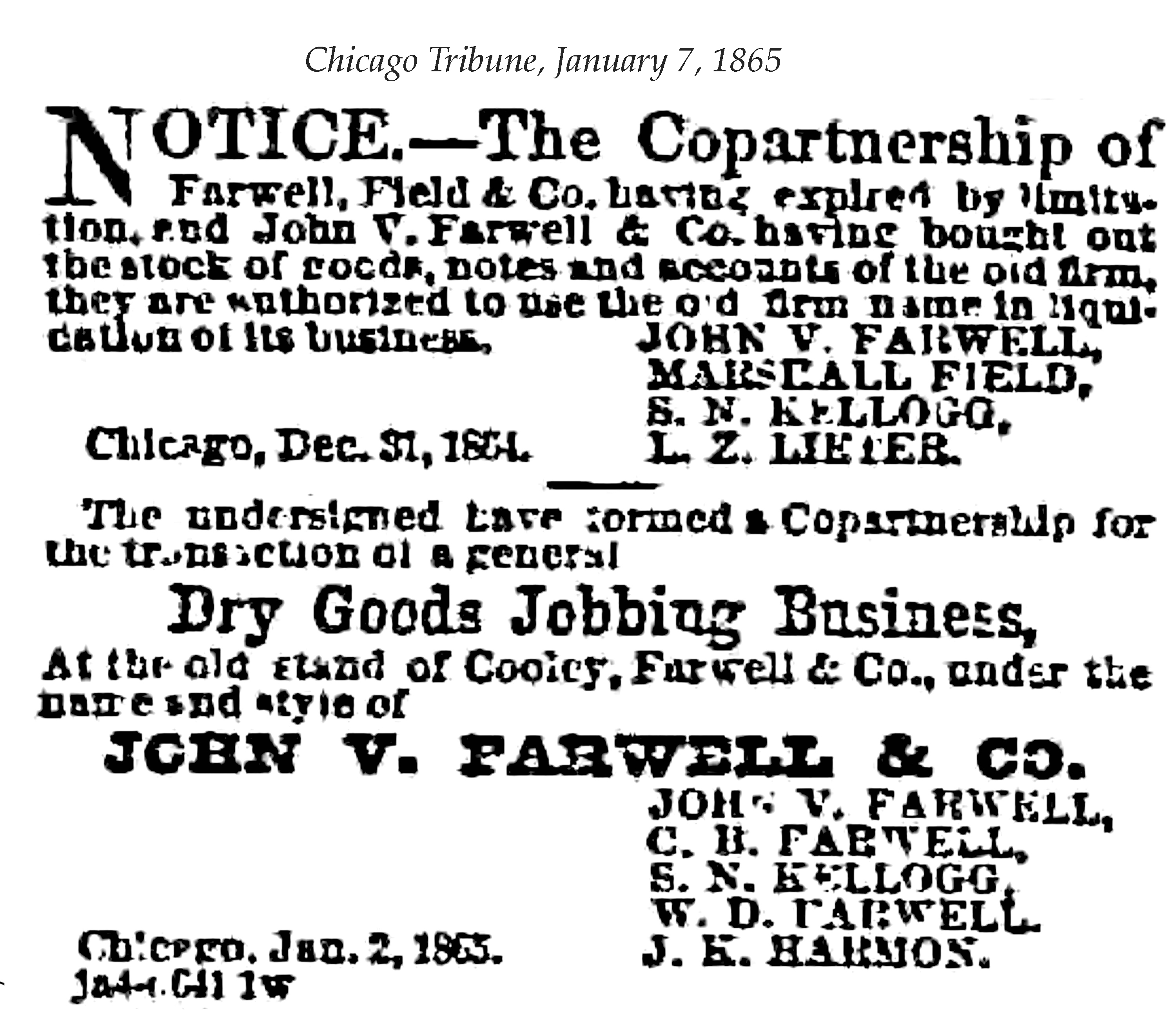 All of the members are well known to the business public, as well as to the jobbing trade of the Northwest. Messrs. Field & Leiter embarked in business in 1856, with Cooley, Wadsworth & Co. Mr. Field became a prominent working member of the firm on its second organization, and both he and Mr. Leiter were of the firm of Farwell, Field & Co. Mr. M.J. Palmer, also a member of the present firm, and who for a number of years had the management of the retail department, will continue to give it his careful supervision.

Every element of success is in the hands of the new firm. The stock is immense and carefully selected, was purchased at a heavy discount on present prices, and will be sold at less than New York figures. Every one of the members of the firm has been prominently and favorably identified with the business of the city for years. Their knowledge of the trade is thorough in all its details, their business principles correct and based upon punctuality and energy, and all the departments of their immense establishment are systematized into the most perfect harmony of movement with these elements. The reputation of their predecessor will be continued, and if capital and energy can accomplish it, will be even further extenced.

It is not often we are called upon to chronicle such important changes as this, which constitutes a milestone in the history of the business of our city, and it is not often that we hail the advent of a new firm with sincere pleasure or move confidently predict its success. The ladies should remember that the new institution opens its doors to-day, and that the well-stocked shelves and counters are their command. In the meantime we cannot but recommend country dealers to send in their orders. They may rely upon prompt attention and transmission. 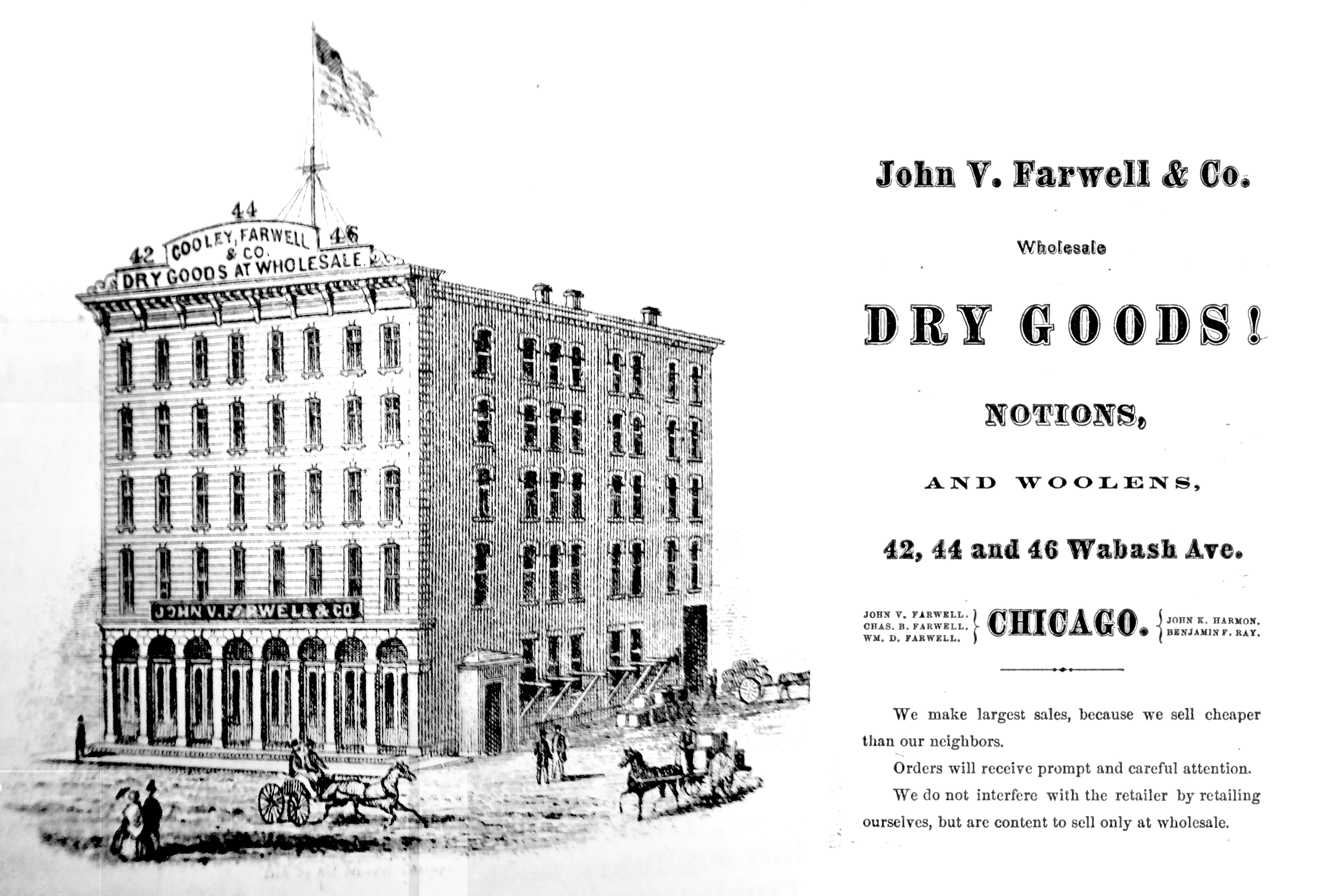 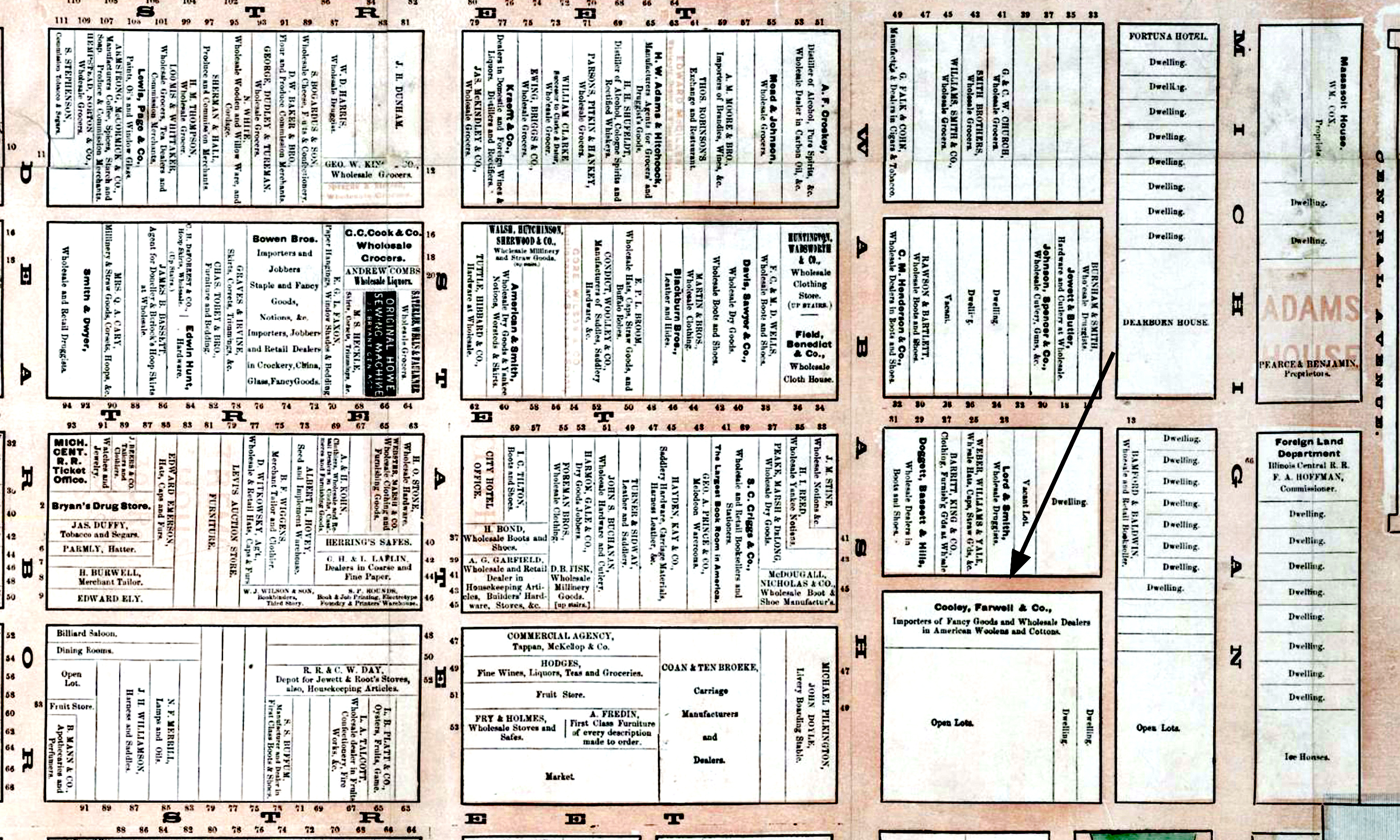