The southwest corner of State and Randolph Streets in 1857. Taken from a daguerreotype. Charles Tobey and Brother were here at 72 State Street from 1857 to 1862. Advertisement from Chicago Tribune, June 18, 1860. There were very few photographs of Chicago taken as early as this. The horse car bears the legend Lake Street and Cottage Grove. 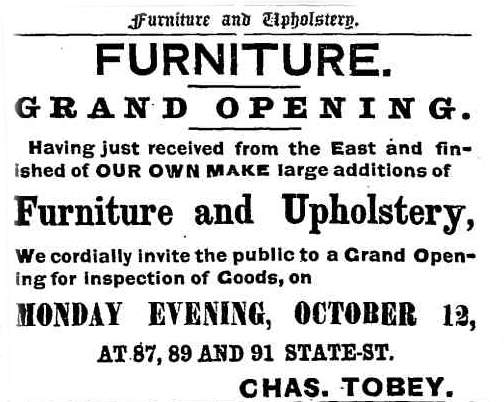 A Magnificent Furniture Display.—The large brick building to the north of Palmer’s Palace, occupied by Mr. Charles Tobey, manufacturer and dealer in fine furniture , bedding, mirrors, & c. was also elegantly illuminated on last evening, Chinese lanterns hung pendant in parallel lines from every story, and their variegated colors and brilliant light produced a very pleasing effect. The interior of the building was also illuminated, setting off to great advantage the stock of elegant furniture on the ground and second floor.

Mr. Tobey is the largest furniture dealer this side of New York City, and probably can exhibit the largest assortment of stock in his line, of any similar trader in the United States. He has been in his present location for three years, and is well known throughout the Northwest. For some time past no one who consults style at all thought of getting married in Chicago without having his house furnished by Mr. Tobey. He is as much a sine qua non in the house furnishing business as Field, Leiter & Co. are in the dry goods line.

Mr. Tobey has never had a formal opening of his great furniture depot, and on last night, either following the example of his neighbor in the marble block, or, as he naively remarked himself, “out of respect for Christopher Columbus,” he threw the doors open to an admiring public. And the admiring public responded to his invitation right gallantly. From seven until twelve his store was thronged with beauty and fashion. To get up stairs was a great labor by reason of the crowd, who were determined to have a glimpse of the rare and beautiful furniture displayed on the second floor before you did. But even if one had to progress slowly, he was well repaid for his trouble—except, possibly, those poor, and consequently, envious persons, who were regretting continually that they could not purchase “the most beautiful and elegant parlor and chamber sets in the world.” It was curious to note the remarks vouchsafed by some of the fair ones. One beautiful blonde said to her brunette friend, as she looked at a gilded and highly ornamented cabinet “Gracious, Louise, mustn’t his house (Mr. Tobey’s) be furnished beautiful.” Louis sighed pensively, and said, “Yes, indeed.”

Papas who accompanied mamas may, possibly, this morning rather regret the little excursion into the interior of the great furniture store, for in the excitement of the moment many of them made rash promises, such as that this and that costly and beautiful piece of furniture should be sent home tomorrow. We hope the ladies will leave the naughty men until they make their promises good.

There is not space sufficient at command this morning in these columns to give a full description of the various articles on exhibition. It must suffice to state that the first and second floors are the salesrooms of the establishment and that the articles displayed are merely samples, no two being duplicated. The basement and two upper stories, which contain a stock of furniture valued at one hundred and fifty thousand dollars were not thrown open to the public, but if anyone took an especial fancy to some article on the exhibition floors, he need have no fear of its being purchased by another, for a facsimile from the store rooms can be furnished on demand.

The exquisite and elaborate workmanship of many of the drawing room, and chamber sets transcends the descriptive powers of the writer, and he earnestly advises all who have the opportunity to gon and see for themselves. The richly covered chairs and settees with cushions filled with curled hair and elastic sponge, bespoke comfort, and almost audibly invited one to repose. The large assortments of pier and mantel mirrors in gold and fancy woods, with heavy ornamentations, were all superb and so clear and excellent in quality of glass as to make one look handsome whether one would or not. The Bible stands, with marble tops so tastefully carved gilded pedestals, were much admired.

The gorgeous coloring of the furniture coverings added a fine relief to the general scene. There were brocatelles, catelines, plain and spotted terrys and an endless variety of other descriptions too numerous to mention. 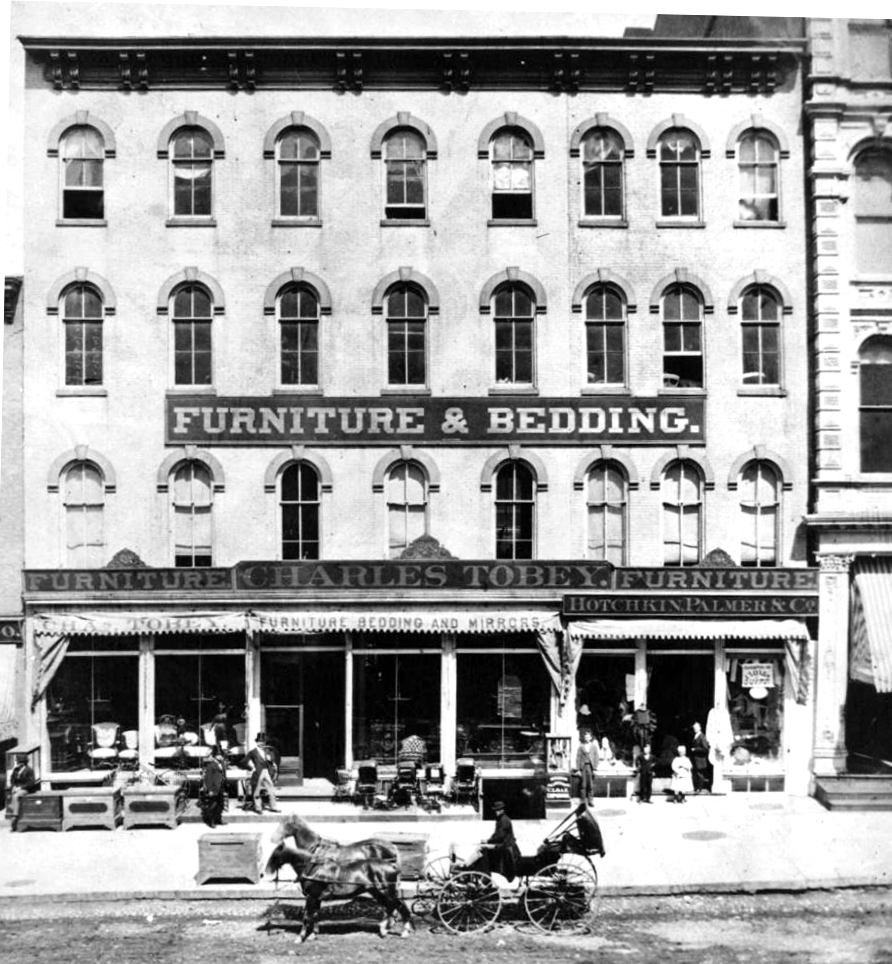 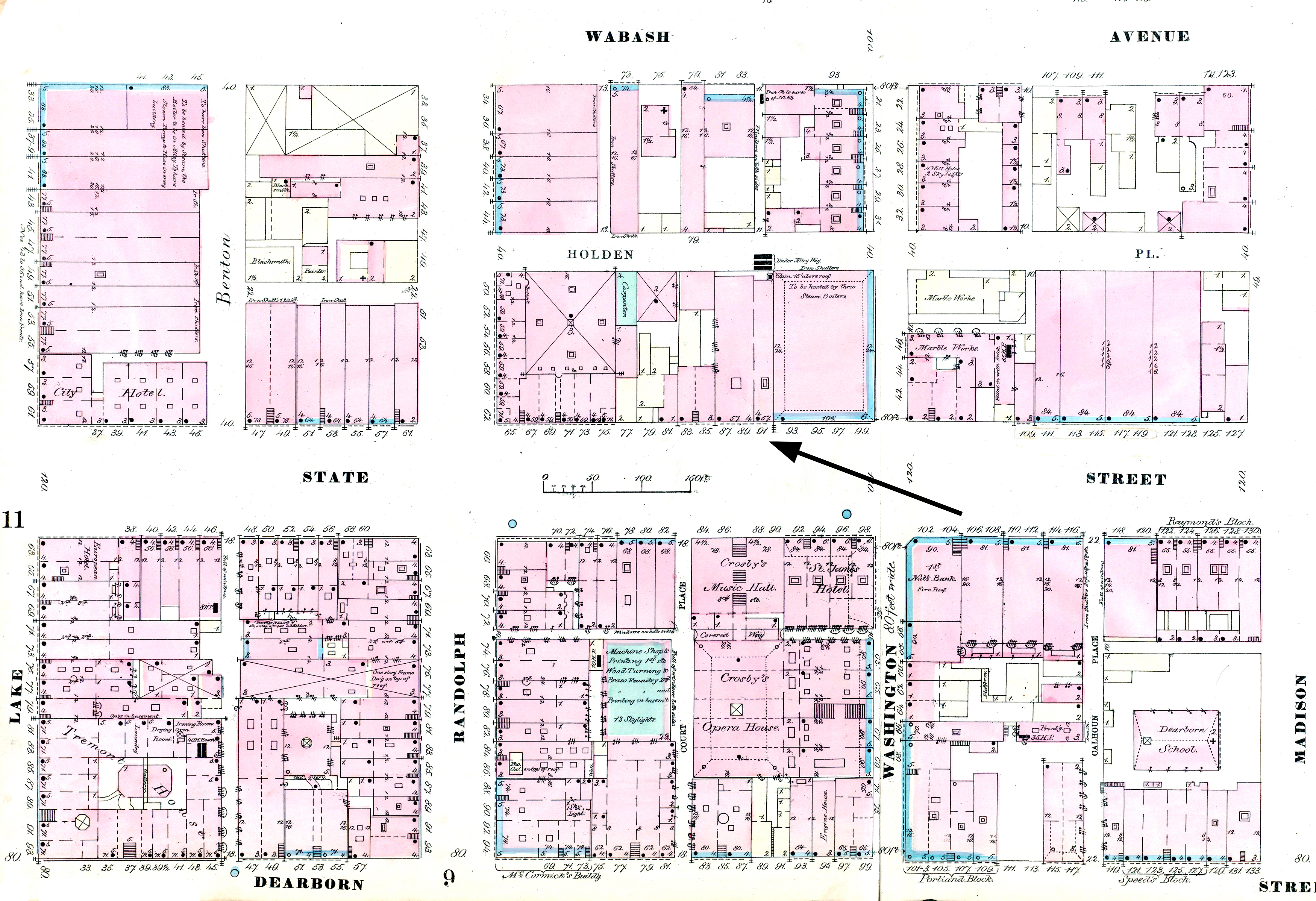 The Tobey Furniture Company of Chicago, Illinois was founded in 1856 by Charles Tobey only about a year after he left Boston for Chicago to sell furniture for a Boston company that would soon go bankrupt. After selling off the Boston firm’s merchandise, Charles and brother Frank Tobey opened up shop.

The company continued to grow in the 1860s, doing quite well in the economic upswing that took place at the outbreak of the Civil War. In 1865, the Tobey brothers joined forces with F. Porter Thayer. By 1868, the Thayer and Tobey partnership proved so successful that a new store was opened on Chicago’s fashionable State Street.

In addition to the mission furniture the company would eventually become known for in the Arts and Crafts movement, Tobey Furniture Company also produced Louis XIV, XV, and XVI -style reproductions and, beginning in 1901, Art Nouveau furniture. The Art Nouveau designs “echoed the exuberant curvilinear lines and organic forms embodied in the distinctive (Art Nouveau) furniture then being shown in France and Belgium”. By the mid 1920s, the company was producing French Art Moderne pieces. It also manufactured and sold tall case clocks. In addition to its own lines, Tobey Furniture sold furniture from over 200 manufacturers from the U.S. and around the world.

Apparently able to survive the Roaring Twenties, the Great Depression, and both World Wars, but not the Baby Boom and rock and roll, Tobey Furniture ceased operations in 1954 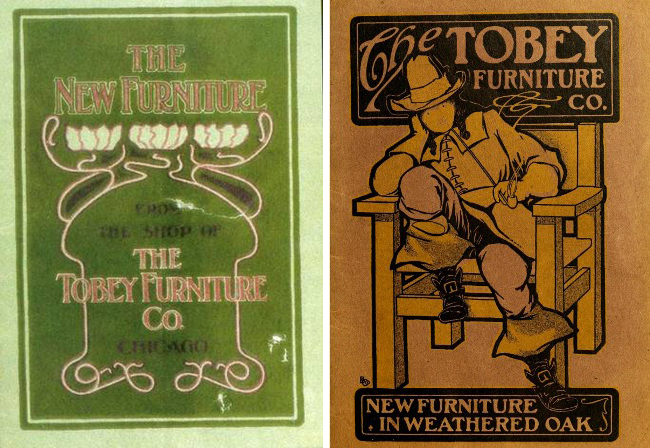