The Chicago Shot Tower Company has just been organized with a capital of $50,000. 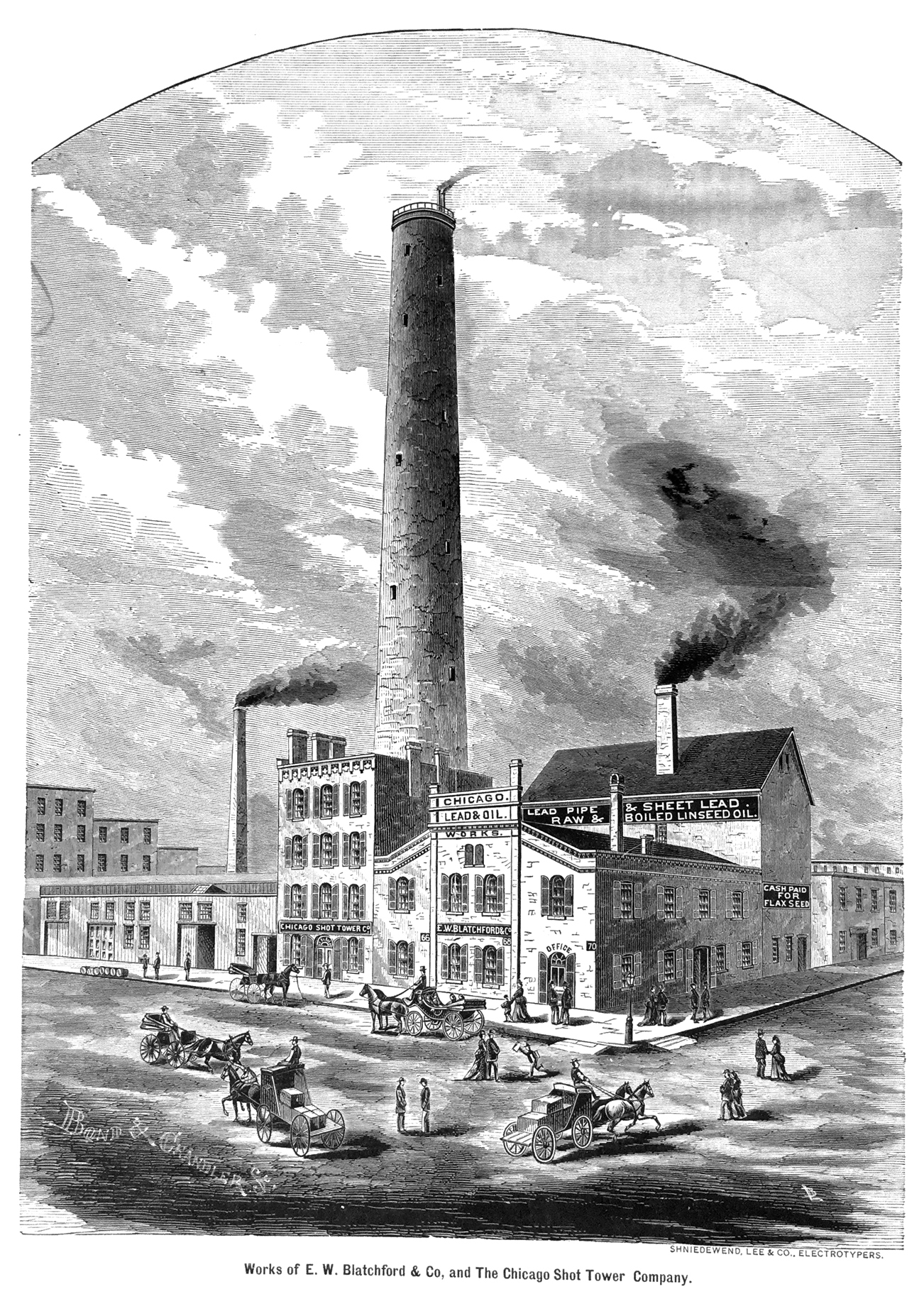 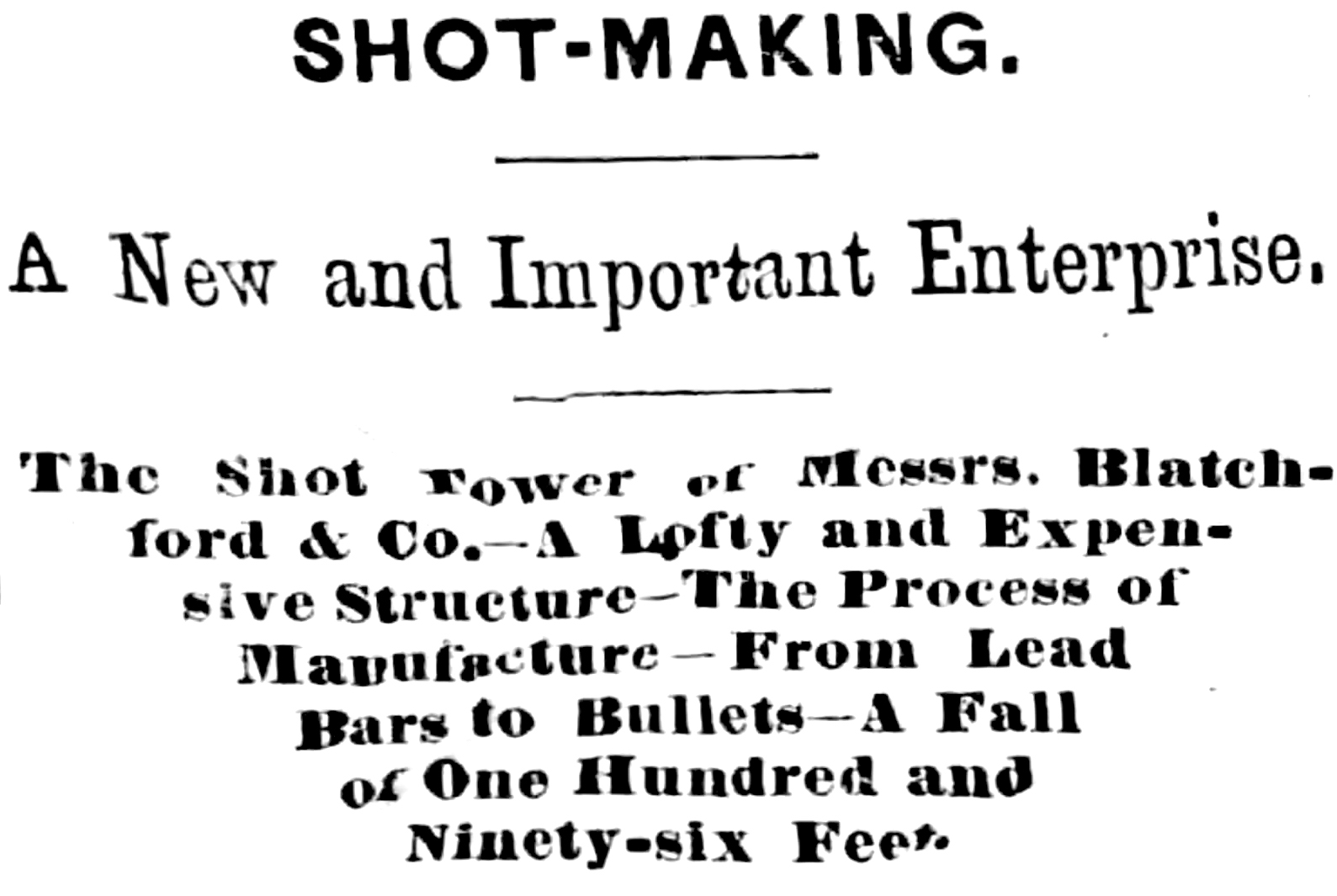 For some time past Messrs. E. W. Blatchford & Co. have been contemplating the erection of a shot-tower in connection with their establishment, the Chicago Lead and Oil works, at the corner of Fulton and Clinton streets, on the West Side, and a short time ago the contracts were made for the mason work and the undertaking was commenced. Excavations for the foundation wall were made to a depth of fourteen feet from the surface and large flat-bedded stones were laid as the basis of the immense tower. The dimensions of of the foundation, which is square, are 32×35 feet, with a large inverted arch in the centre which reaches down from the top of the cap-stones a distance of ten or twelve feet, so that the bottom of the arch is on a level with the basement floor. Into this arch or reservoir the shot will drop from the top of the tower. As a means of communication, a door is cut through from the basement, and a track will be laid for cars to run upon to carry the bars of lead in and bring out the shot. Within the tower will be an elevator, worked by steam, which will take the lead to the top. The brick work will commence immediately on the top of the capstones, and the tower will be twenty-five feet in diameter at the base, running up to the great height of 196 feet, in the form of a cone, the diameter at the top being twelve feet. The wall will be three feet and a half in thickness, and it is estimated that it will require 700,000 brick in its construction. 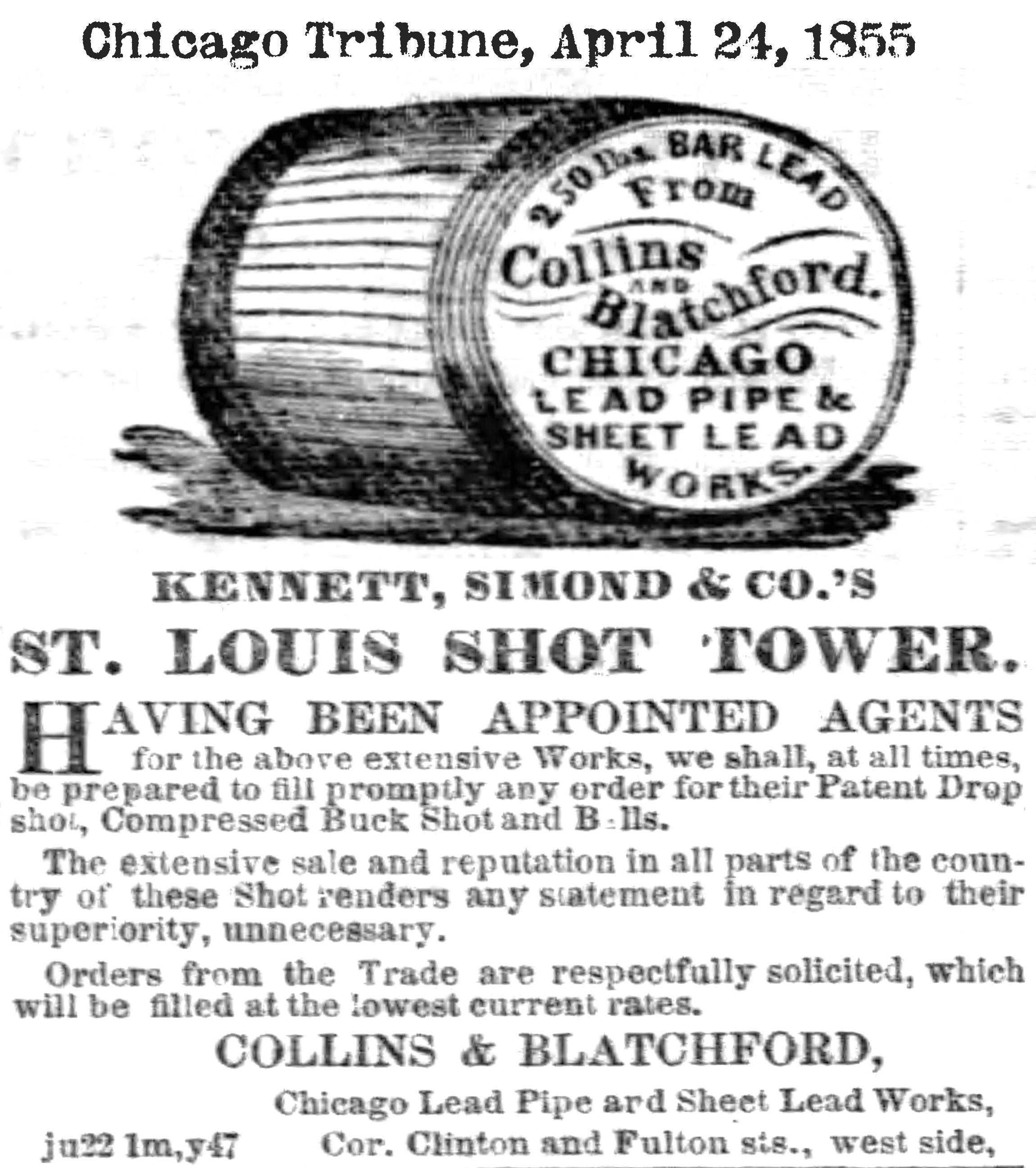 The process of making shot by a tower was invented in 1782. in Bristol, England, by a workman named Watts, who proved its practicability by pouring some molten lead from the tower of a church in Bristol. The principle now in use is nearly the same, molten lead being poured through a colander, from a considerable height, into reservoirs of water below. The lead falls in small globular drops. The holes in the colander, of course, vary in size according to the denomination of the shot—No. 0 requiring holes 1-50th inch in diameter ard No. 9 holes 1-360th inch in diameter. The colanders are iron hemispheres 10 inches in diameter and are coated with the cream or scum which is taken from the molten metal. A small portion of arsenic is melted with the lead and the fusion in the colander is maintained by those vessels being surrounded by burning charcoal. The fall through the air enables the lead to cool and harden before taking its plunge in the water. Previous to this discovery the shot were dropped from the colander at once into the water. but the lead was then so soft that the shot were flattened by coming in contact with the water The smaller sizes require less fall than the large—100 feet suficing for sizes Nos. 4 to 9, and the larger sorts demanding 150 feet fall.

After cooling, the shot is sifted in successive sieves to separate the sizes. Imperfect shot are found by their inability to roll. The black, polised appearance that shot have is caused by placing them in small octagonal boxes in which a little plumbago has been thrown and to which a rotary motion is then given. 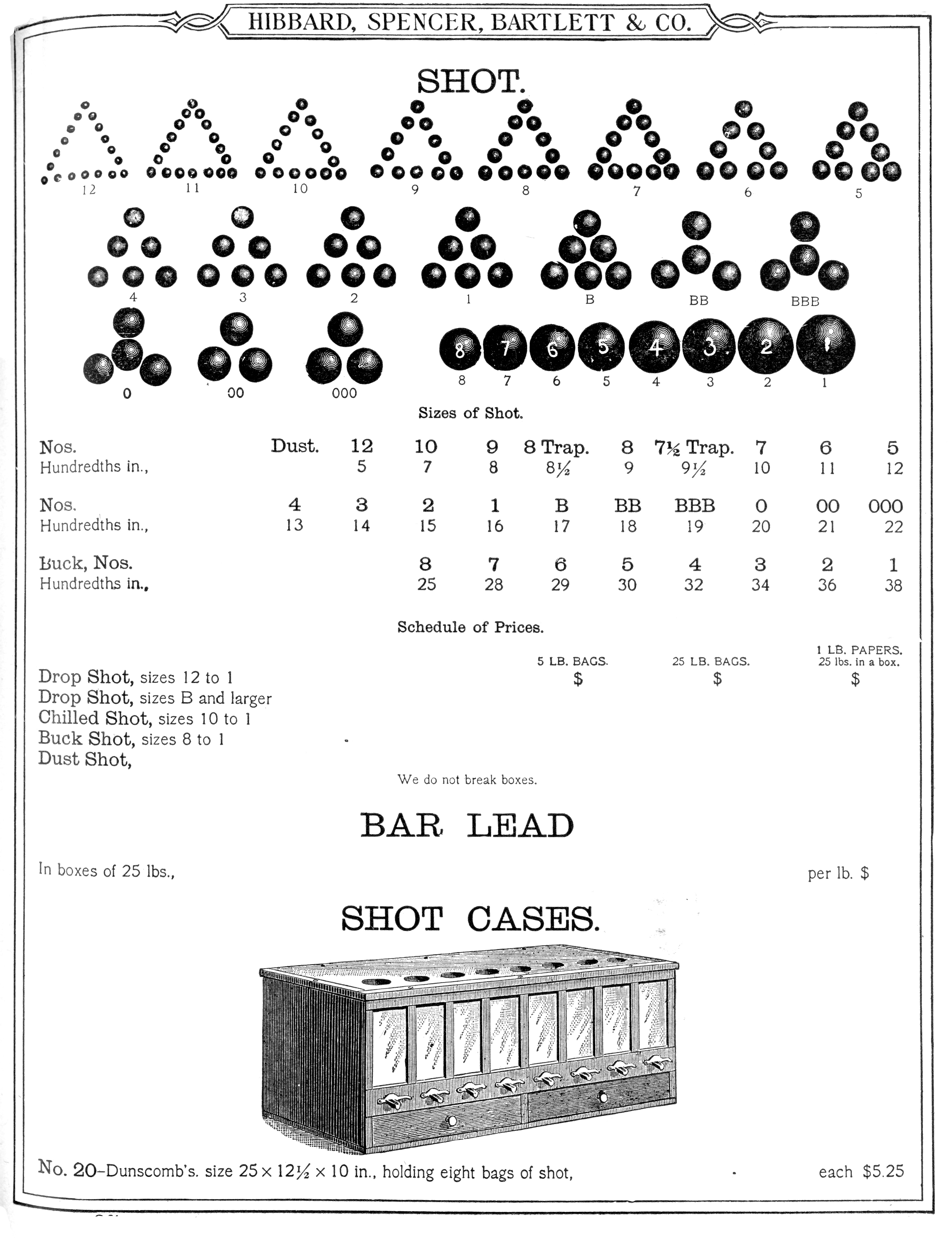 The highest shot tower in the world is in Italy, where there is a fall 249 feet, but probably there is not a more substantial foundation in the world than that which has been laid by Messrs. Blatchford & Co. In the superstructure as well as foundation the very best material will be used, the brick being of the first quality and costing eleven dollars per thousand. The hydraulic cement which is used will harden and become as firm as stone, and perfectly water tight. 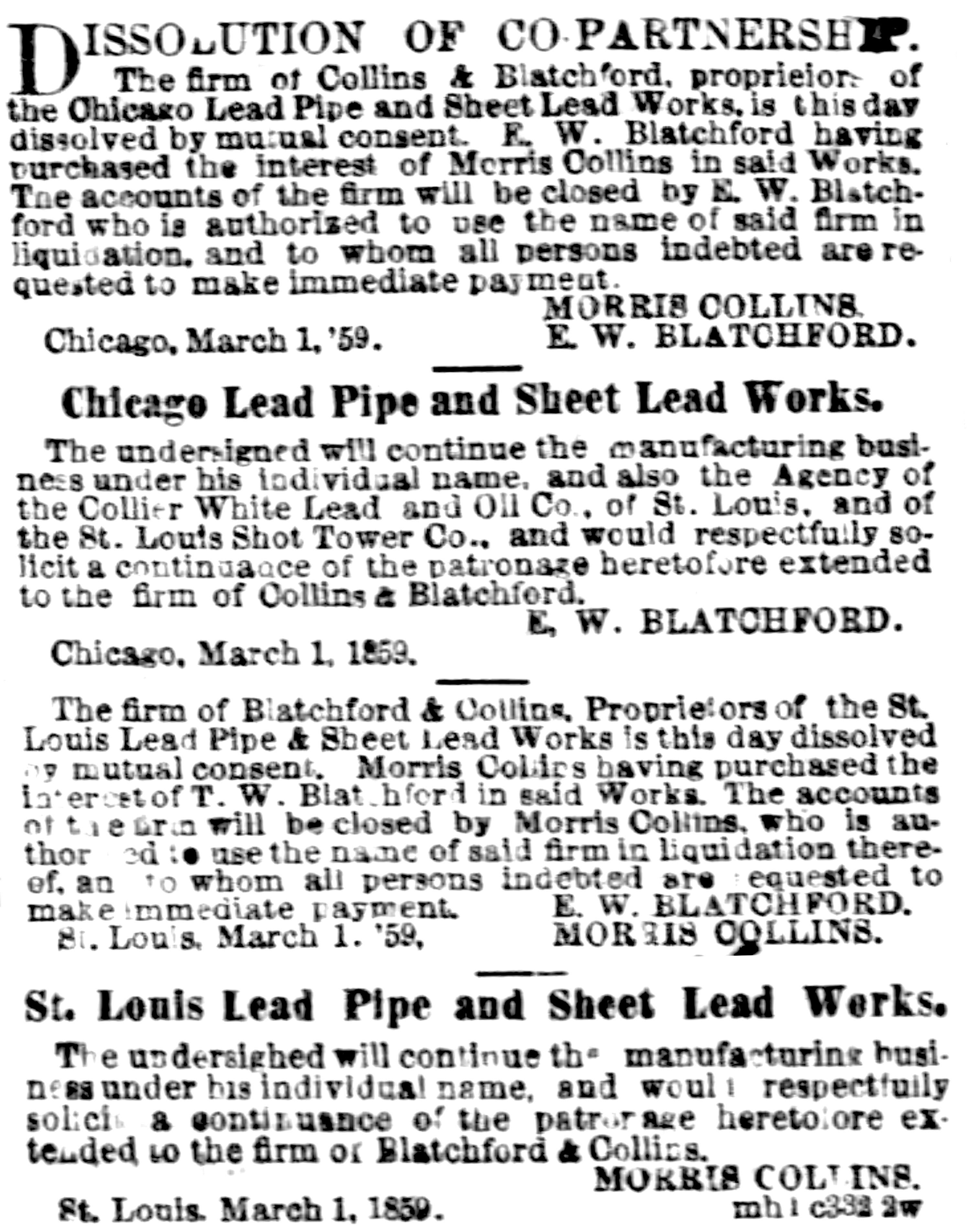 It may be thought that the demand for shot is rapidly decreasing now that the war is over and game growing scarce, and that in view of the near approach of the millennium, when there will be no necessity for these deadly missiles, the great enterprise, the only one of the kind in the State, will be without use.

Such is not the fact, however, the demand for shot being immense and increasing, and as this manufactory will save the transportation of the heavy material from the East, it will be undoubtedly find constant employment and prove profitable to its energetic proprietors, as it will be creditable and advantageous to the city.

It is thought that the work will be completed about the first of January next,—perhaps before then—the immense foundation being completed, and the brick work of the tower proper already some two feet in height. The cost of the tower will be $65,000, and that of the building which is to surround it some $10,000 more, making the total cost of the undertaking $75,000. The progress and completion of the work will be a source of interest to our citizens, and the lofty tower will be a conspicuous landmark for many miles around. 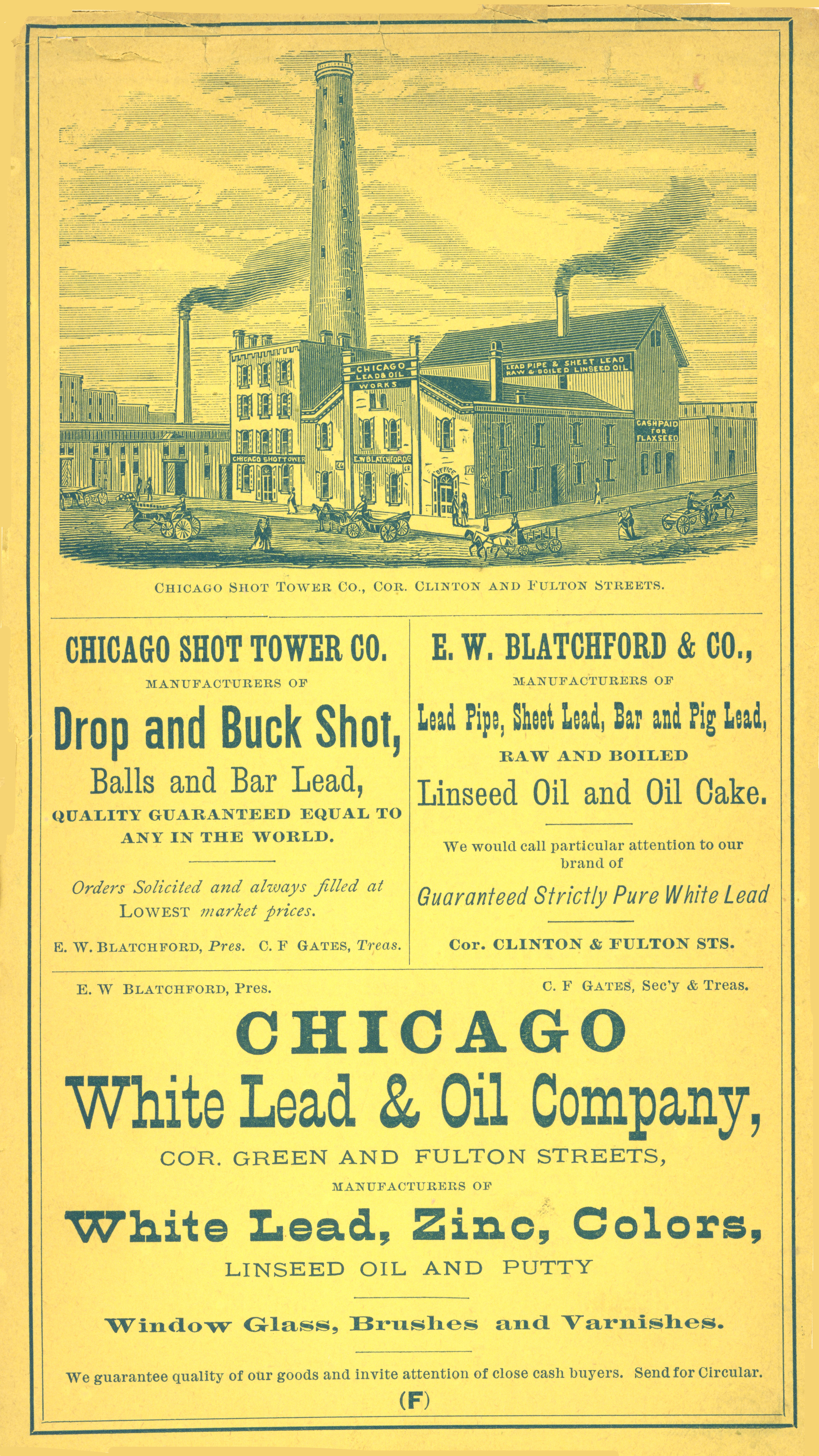 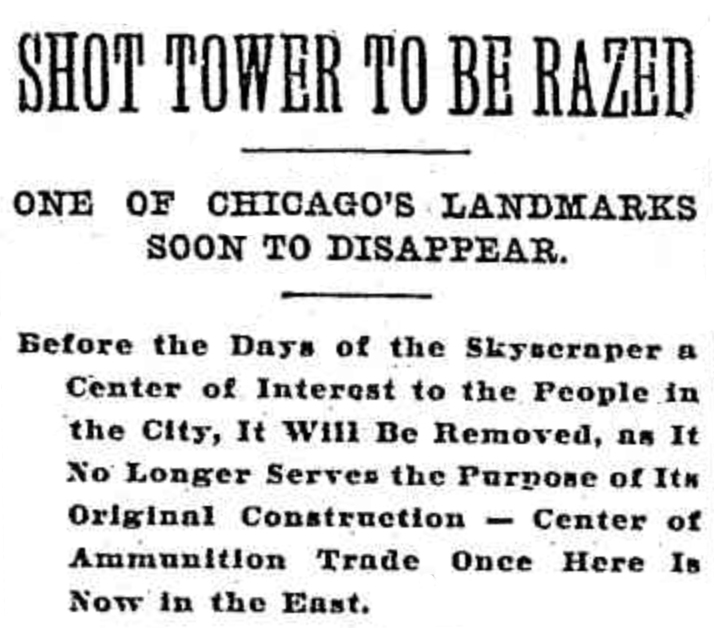 After remaining for thirty-four years one of the landmarks and sights of Chicago, the old shot tower at the southwest corner of Clinton and Fulton streets is to be torn down and the ground under it devoted to other uses.

Fifteen and twenty years ago the Chicago shot tower was one of the prime attractions of the city. Its existence was known for a hundred miles in any direction, and strangers from contiguous towns were usually anxious to visit the place “where shot was made.” It was as much a center of interest in its day as the Auditorium is now. Before it became surrounded with high buildings and in advance of the skyscraper the tower was one of the loftiest points in the city. But it is to go. In a commercial sense it has become a “back number,” and it is to be razed by its owners because it no longer serves the purpose of its original construction. It has been “distanced” in the rapid march of business.

Little or no shot has been made In the old tower for several years. When the American Shot and Lead company was formed the Chicago tower absorbed by the trust. It is not known what sort of a building will supplant the tower, but it will not be one for the manufacture of shot.

The tower was built In 1867, and is 195 feet high. The shot were made from molten lead and dropped from the top of the tower into water at the bottom of the structure, the ball formation being obtained in the falling. The Chicago tower is not the oldest in the West, the one in St. Louis antedating It. The American Shot and Lead company owns similar towers in Cincinnati, Kansas City, Omaha, and New Orleans. The plants In Cincinnati and St. Louis, however, are the only ones now operated.

“There has been a change In the trade center of the shot business during the last fifteen or twenty years,” said J. R. Wettstein, secretary of the American Shot and Lead company. “The consumption has moved from the West and South to the East.

Active work has begun in tearing down the old shot tower which has stood for thirty-two years at the corner of North Clinton and Fulton streets. The old shaft which was once used to lift up the lead to the melting kettles at the top has been fitted up with a chain elevator with twenty-four buckets. This is fastened on supports which can be lowered as the structure is torn down. The elevator is worked by the weight of the bricks in the buckets. When the load reaches the bottom it is thrown out with such force that the sound of the bricks being hurled against a temporary fence can be heard for a block.

The men have succeeded in three days in tearing down twenty-five feet of the tower. It is expected that it will be several weeks before the work is finished. The tower, which was built in 1869, was 200 feet high. At the top its circumference was twelve feet, the walls being thirteen inches thick. At the top were melting kettles and at the bottom was a tank of water, four feet deep. The molten metal was passed through a sieve and was formed into balls by its passage through the air, while its fall was broken by the water.

The cost of the tower was something like $40,000. In its place will be erected a six-story structure for manufacturing purposes 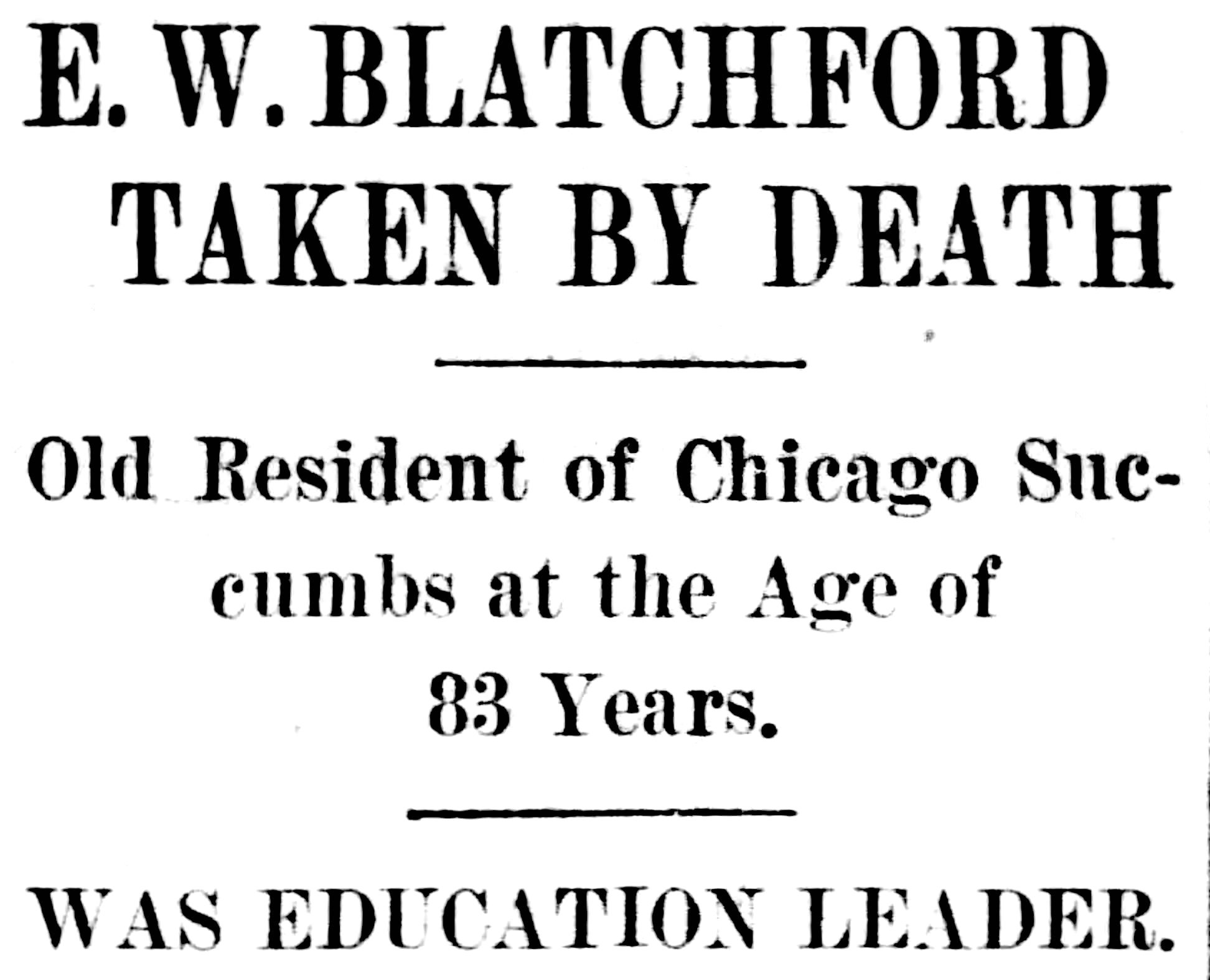 Eliphalet Wickes Blatchford. one of the old residents of Chicago and conspicuous in the social, industrial. and educational life of the city, died last night at the family residence, 1111 North La Salle street. He was 83 vears old.

Mr. Blatchford was, from an executive viewpoint, the “father” of the Newberry library and the Crerar library. For years he was head of the board of directors of the Chicago Theological seminary, vice president of the American Board for Foreign Missions of the Congregational church, and a trustee of Illinois college and of Rockford semtnary.

Aided Balkan War Sufferers.
Mr. Blatchford was one of the originators of the Chicago City Missionary society, the Chicago Congregational club, and the New West Education Commission. It was in his house that the Bohemian mission of Chicago was organized, and one of his last great activities was the starting of an appeal one year ago for aid for the sufferers from the Balkan war.

Mr. Blatchford was born in Stillwater, N. Y. on May 31, 1826. He removed to Chicago in boyhood, when his father, the Rev. John Blatchford, became pastor of the First Presbyter1an church. He was educated at Illinois college at Jacksonville, from which he was graduated in 1845. Five years later he went to St. Louis and engaged in the lead and oil industry, and in 1854 came to Chicago to manage the local office of his partnership. The firm subsequently was dissolved and that of E. W. Blatchford & Co. started. This continues today near the site of the old office of sixty years ago. Latterly he had retired, leaving the business to the management of others of his family

“Fathers’ Two Libraries.
Mr. Blatchford’s public services began in 1861 when he was made treasurer of the northwestern branch of the United States sanitary commission, laboring desperately here and in the south in the hospital service of that period.

A few years later he and Judge Mark Skinner became trustees for the Walter C. Newberry estate, out of which came the Newberry library. It was in 1891 that the will of John Crerar made him trustee for the $3.000.000 estate which brought the Crerar library.

Twenty years ago Mr. Blatchford, with his wife and daughter, made an extensive tour of Egypt and Palestine, visiting 120 missions and making a special report with recommendations to the home office of the church. The old residence in North La Salle street has been occupied by the Blatchford family since the Are of 1871. and was erected on the ruins of the former residence. It contains a library of 5,000 voiumes, one of the best in Chicago.

Mr. Blatchford was a mernber of the Union League club, the Chicago club, the University club, and the Chicago Literary club. The funeral arrangements have not been completed. 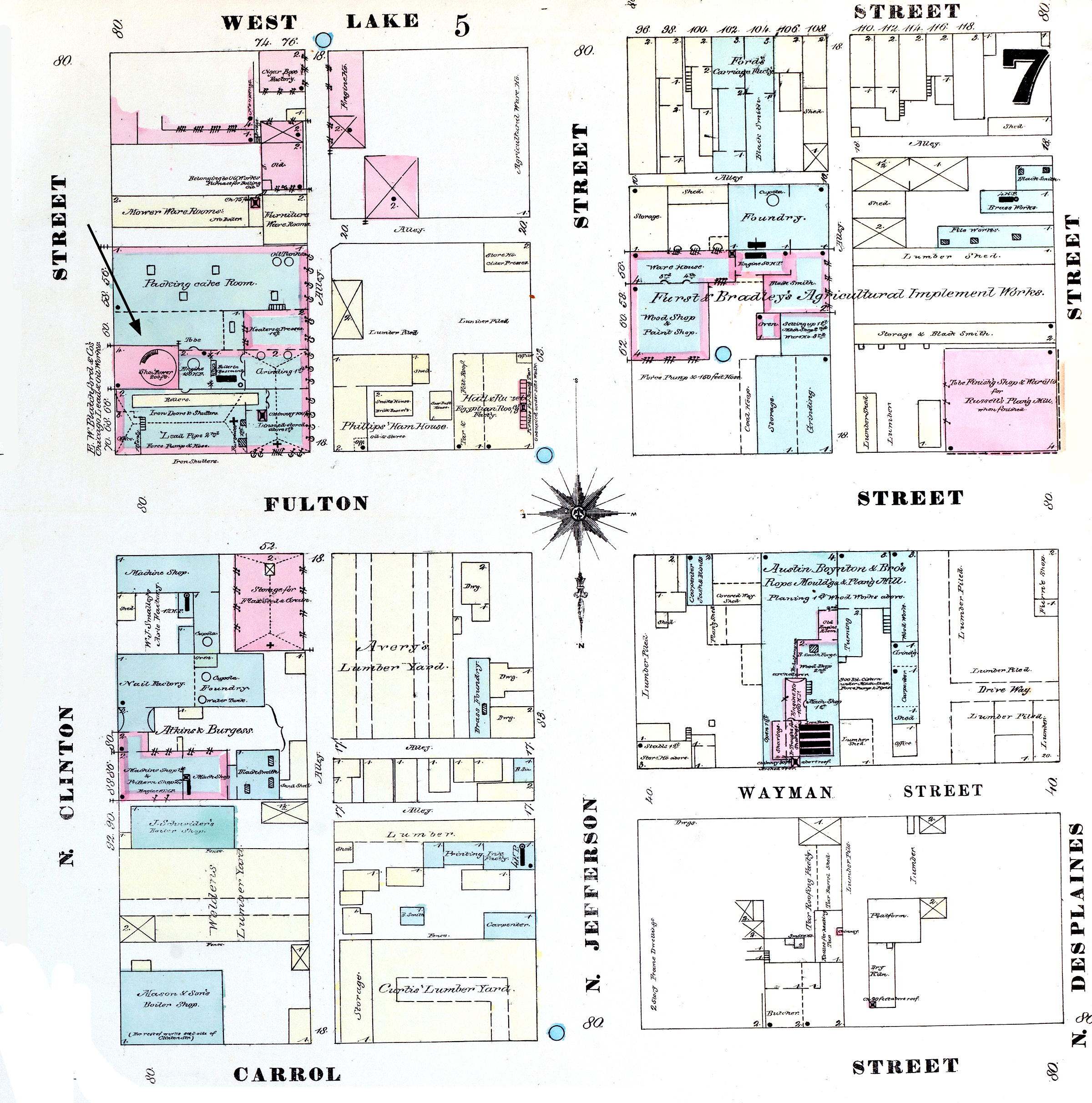 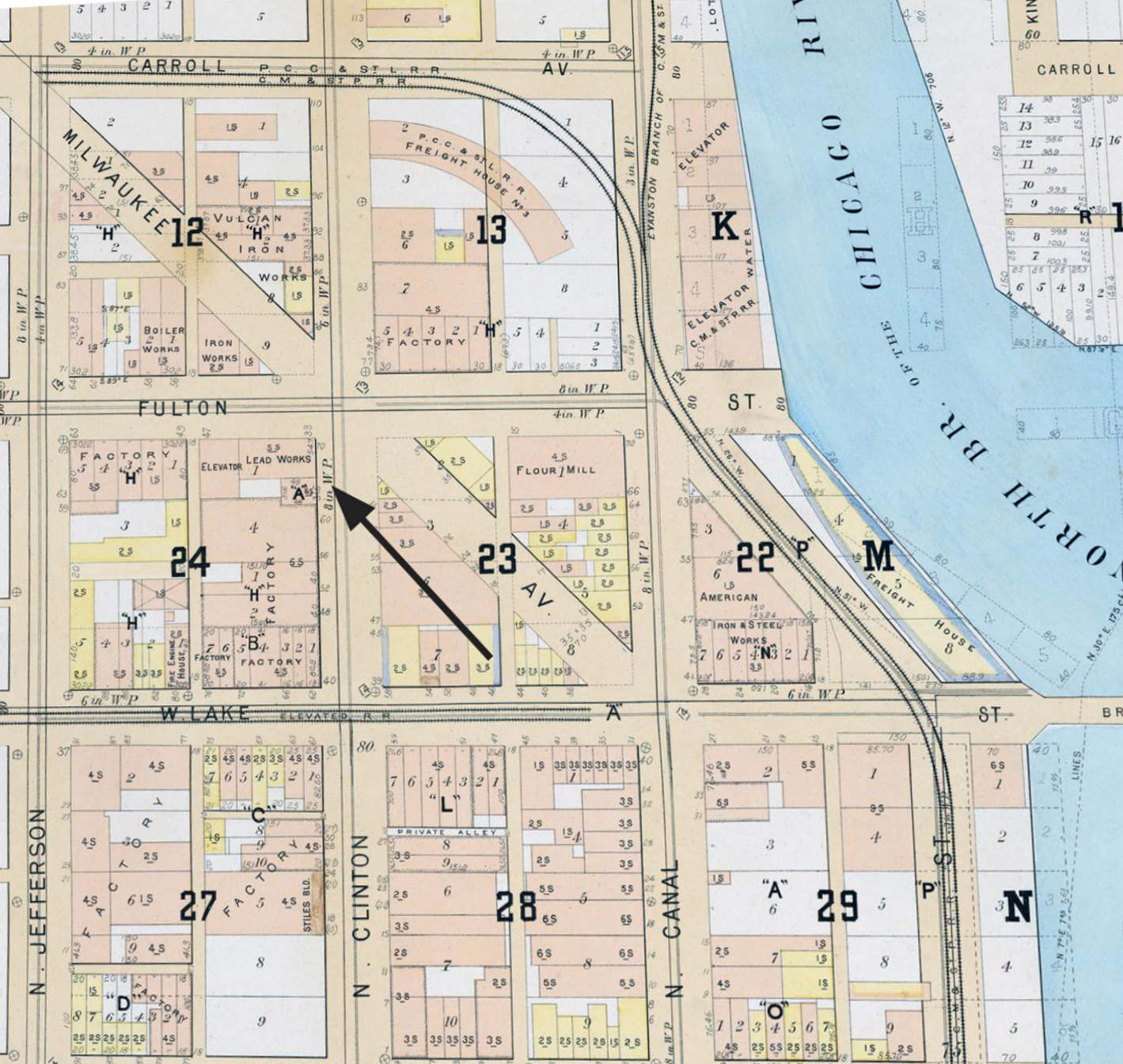