THE CHICAGO CLUB, Plans of the New Building. The Chicago Club has begun the erection of a building for its use on Monroe street, directly opposite the ladies’ entrance to the Palmer House, and the following description is taken from the architects’ plans: 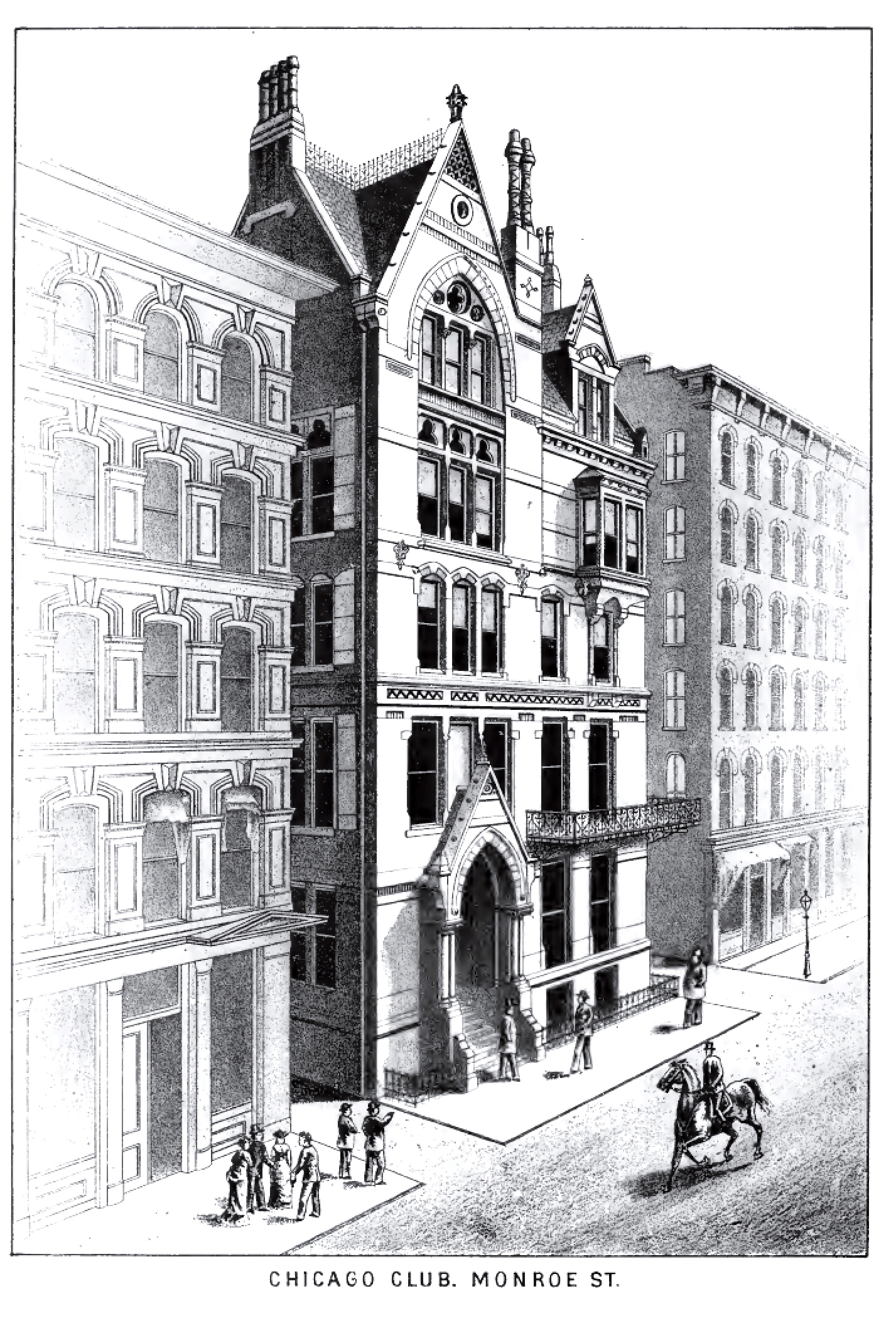 The situation is a most trying one, the street being narrow, and the site being completely surrounded by buildings varying in height from four to nine stories. The lot which is to be covered is 50 x 100 feet, and, fortunately, has alleys on three sides. The front, designed in the modern Gothic style, will be faced with the best selected Baltimore pressed brick. Below the main floor line the front will be of limestone, with diagonally pointed and “droved” work. Above this line the front will be ornamented with frequent wide horizontal bands of Berca sandstone, occasionally inlaid with caustic tiles and black brick. The entrance will be up a flight of stone steps through an arched doorway, with Scotch granite pillars and ornamented capitals.

The west half of the front is to terminate in a bold gable, made somewhat picturesque by the use of ornamental chimney-tops near the base on the east side. This gable has for its counterpart a brick and stone double dormer window on the east half of the front. Below this dormer extends a stone cornice and stone oriel window, the support of which is carried down to the belting course at the sills of the third story windows. A large ornamental pointed window, extending up the front gable, is subdivided for light in the fourth and fifth stories. The roof will be of the best slate, laid on incombustible tiles and surmounted with an elaborate iron cresting.

At the floor of the second story, and extending from the front entrance around into the east alloy, is to be a broad balcony 6 feet wide, supported on ornamental iron brackets.

THE MAIN FLOOR
will be raised 6 feet 8 inches from the sidewalk giving a 10-foot basement, the greater part of which is above ground. Entrance to the building will be through an ornamental doorway and vestibule situated near the western corner of the front, by which the main hall is reached. This will be a most inviting portion of the building, having plenty of light, and being 10 by 26 feet in size. It will have a flooring of encaustic tile, and will be furnished with settees, etc., beside a handsome mantel. Directly beyond this is the stairway hall, a semi-octagonal space 25 feet in diameter. From the hall ascends the main stairway, constructed of hard woods with frequent landings and guarded with heavy posts and rails. In the smaller hall will also be placeds the office, put in a convenient locality for overlooking all the rooms on the main floor,

THE PARLOR,
26×37 feet, is situated in the front of the building, having two windows in front and two on the alley. Folding doors will connect the parlor and the larger hall, and when these are thrown open the result will be to bring the mantels in juxtaposition.

THE MAIN DINING-ROOM
will be at the northeast corner, and will be 26 by 51 feet. It will have six large windows, will and be entered from the hall by large folding-doors. Between the parlor and dining-room as well as with the wine cellar in the basement. The remaining space on the main floor will be devoted to wash-rooms, water closets and, rooms in connection with the dining-room. There will be a back stairs at the northwest corner, extending from the basement to the roof.

The greater portion of

THE BASEMENT
will be used for kitchen, a a laundry, and storage purposes. The space under the alley will be utilized for boiler-room, ovens, and receptacles for fuel.

In the front of the basement will be the billiard room, 30 by 47 feet, reached by a continuation of the main staircase. This will be lighted at two sides and in front, and will contain three tables.

The communication from the kitchen to the dining-room will be by the back stairs. These will be 5 feet wide, and with square landings, and this method of access is deemed preferable to the dumb-waiter system, though there will be one of those useful auxiliaries running from the bottom of the fifth floor.

At the west side of the building will be built a ventilating shaft, into which will be carried the superfluous heat from the boiler and kitchen smoke-stacks, removing the great annoyance of heated flues in summer. Into the shaft will also be conveyed all the kitchen odors as far as possible, and it will also be used to ventilate the principal rooms in the building. 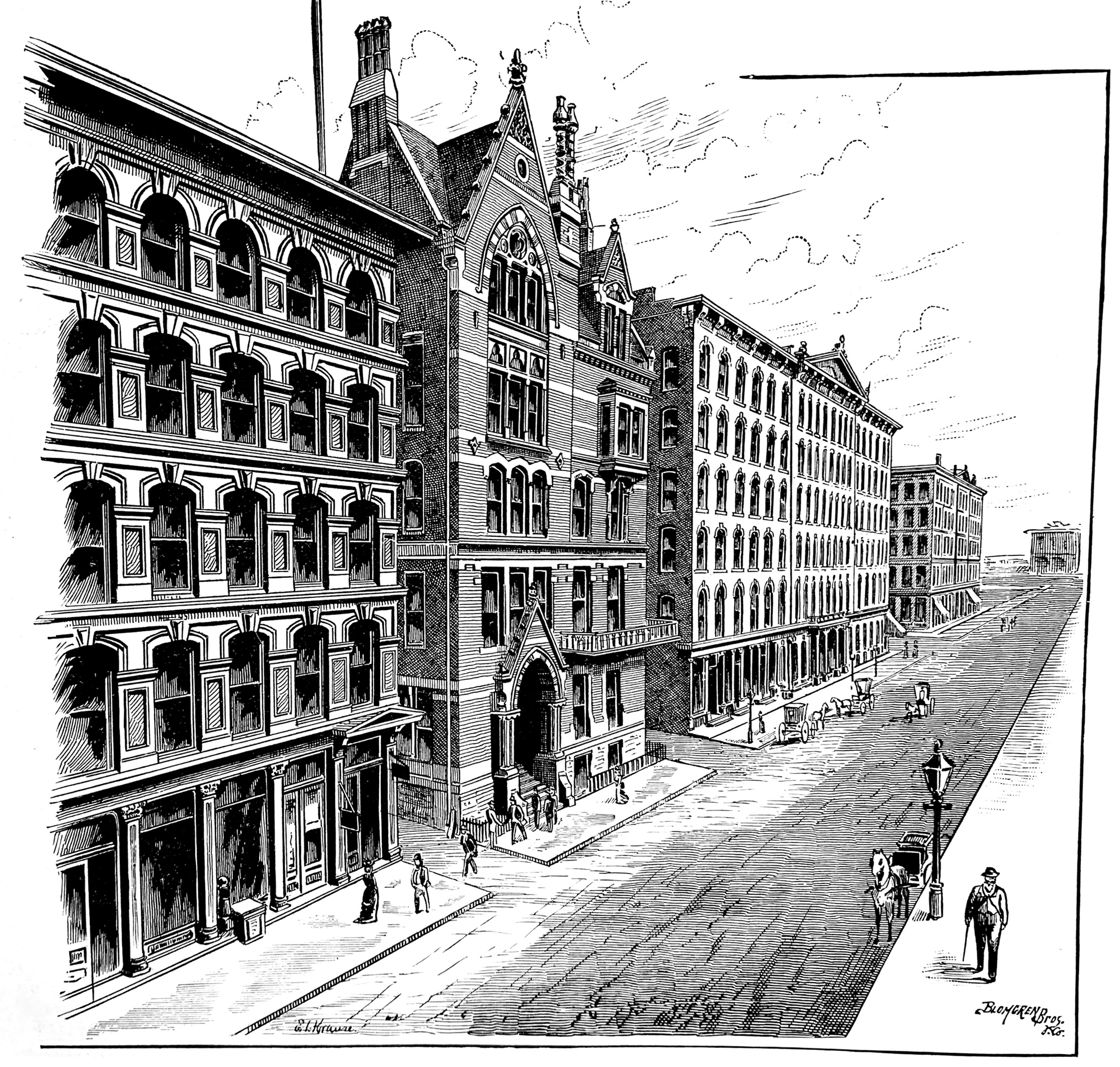 THE SECOND STORY
will be devoted to social purposes almost entirely. In the front part will be the card-room, 30 by 40 feet, and back of it will be the library, 21 by 30 feet. Across the hall from the apartment will be situated the Directors’ room, 19 by 22 feet. The remainder of the floor will be devoted to private dining-rooms of which there will be two for parties. They will be 17 by 26 and 20 by 22, and will be arranged so that they can be thrown open and form one large room, 39 feet in length.

THE THIRD FLOOR
will be divided into sleeping-apartments for gentlemen, of which there will be ten, all finely arranged, and having on the floor with them all toilet and other necessary conveniences. 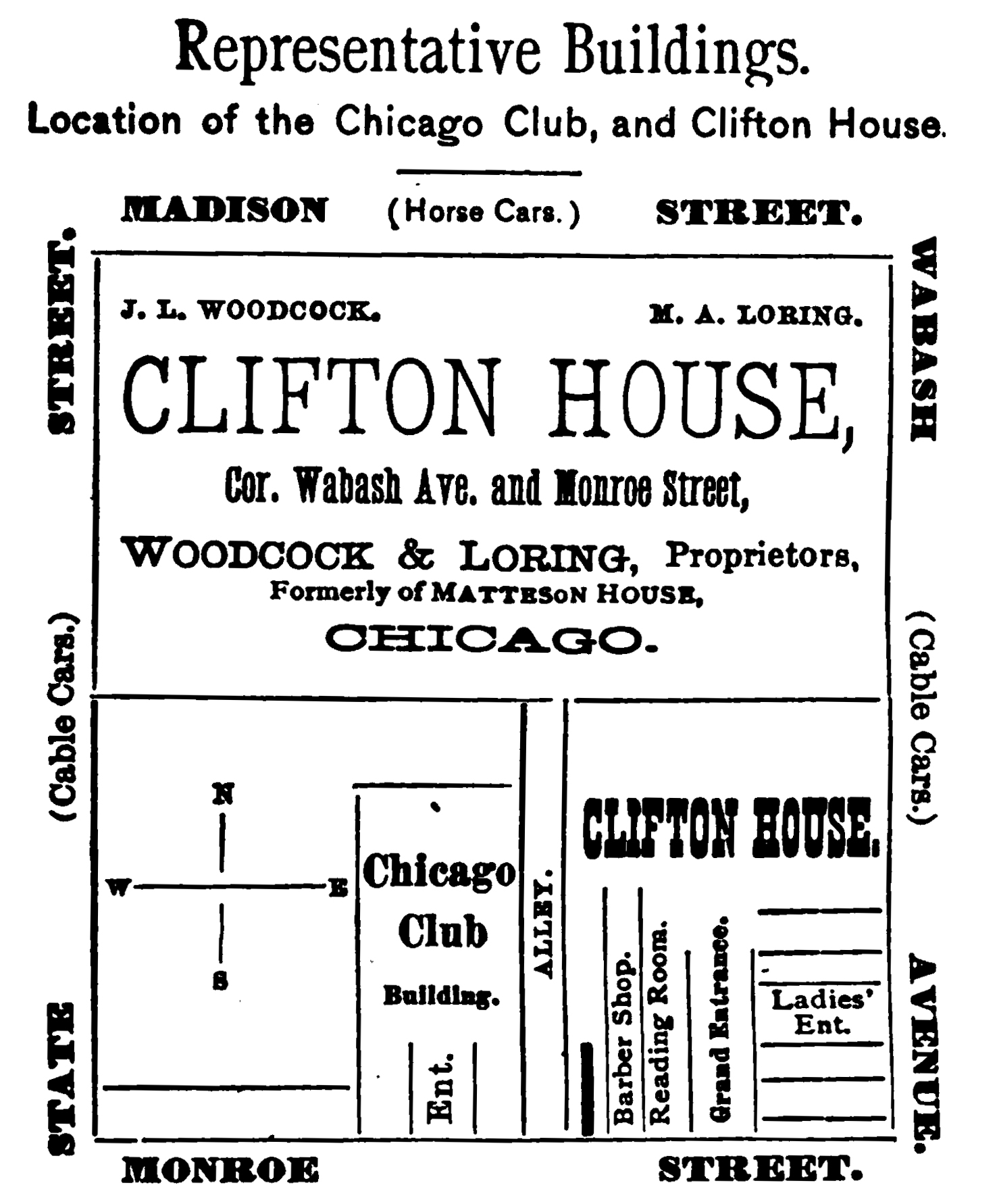 THE FOURTH STORY
will be only partially finished at first, and the only rooms intended for use will be a suite for the steward of the Club. It is, however, expected by the Club that in the course of time they will change the arrangement of the clubhouse so as to put the kitchen on the fifth floor, and the dining-room on the fourth. When this is done it will be the best-arranged establishment of its kind in the country.

WORK IS PROGRESSING
quite rapidly on the building, and the contractors expect to get it inclosed before the cold winter weather. If they succeed in this, they will put in steam pipes for warmth, and continue the finishing of the inside, so as to have the structure ready for occupation by spring.

Excerpted from The Chicago Clubs, 1888

HE Chicago Club is the oldest organization of the kind in the City, and among its list of members figure the names’of a large majority of the gentlemen who are most prominent in business and social circles. The present Club, which had its origin in the old Dearborn Club, with headquarters on Michigan Avenue near Jackson Street, was incorporated in 1869. Its first club house was at the corner of Wabash Avenue and Eldridge Court. After the fire the present building was erected on Monroe Street, just opposite the Palmer House, an admirable situation, in the very centre of the business portion of the city. The interior is excellently arranged .for the comfort and convenience of the members, with parlors, library, reading room, cafe\ dining room, private supper rooms and sleeping apartments, all furnished with quiet and unostentatious elegance. The dining room and kitchen are at the top of the house, the cuisine being noted throughout clubland. The members of the Chicago claim, with pardonable pride, that in the excellence of its service and the perfection of its internal arrangements their Club is unequaled throughout the West. Unlike some of the other clubs, the Chicago is very strict in the exclusion of residents as visitors to the Club. The initiation fee is three hundred dollars, and the annual dues eighty dollars, payable semi-annually.

From 1809 to 1871, Mr. Ezra B. McCagg was President, and the three years following Mr. Philip A. Hall filled the office. Since 1875, Mr. Nathaniel K. Fairbank (who has been most instrumental in furthering the interests of the organization) has been its presiding officer. Mr. Robert T. Lincoln is the present Vice-President, and Mr. Frank A. Marsh the Secretary and Treasurer. The

The old Chicago club building, Monroe street, opposite the Palmer House, has been leased to the De Jonghe family, who will overhaul it and establish a restauramt. Te lease runs for ten years at $16,000 a year. 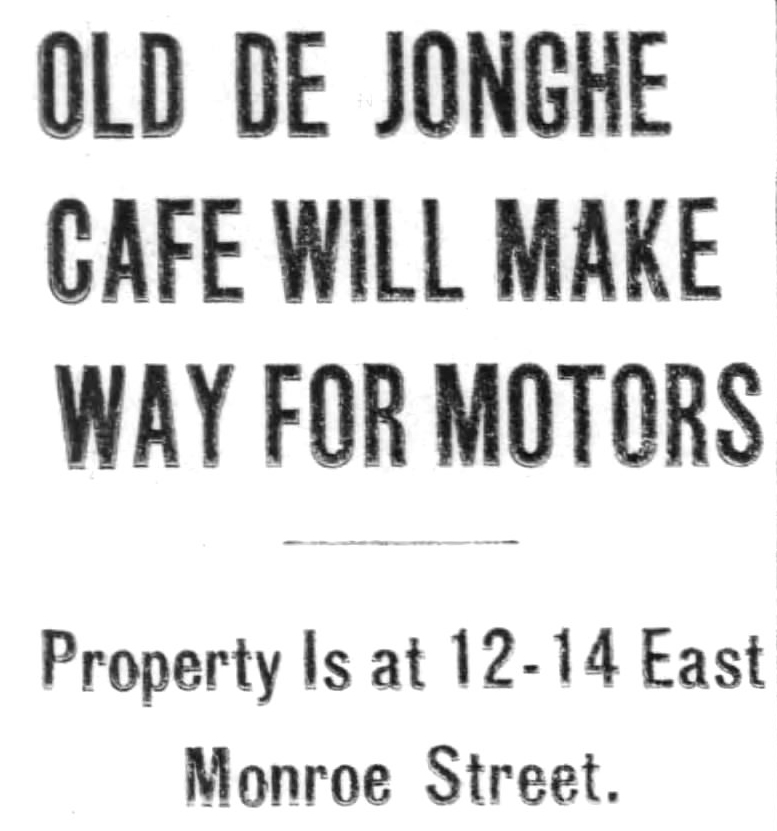 One of the loop’s oldest structures, the six story De Jonghe building at 12-14 East Monroe street, is to be replaced with a ten story modern garage. A sublease was negotiated yesterday by Carson Pirie Scott & Co., for a long term of years, with Earl T. Moseley, loop garage operator. Moseley has had plans drawn by architect M. Louis Kroman for a building.

This will be the first garage in the loop to connect directly with a department store. Carson Pirie Scott & Co.’s will be able to go from the garage into the store.

Work to Start at Once.
According to Moseley, the present tenants of the building will leave this week. Work will be started immediately on the new structure, with completion set for seven months later.

The building, 50 by 105 feet, will have a granite base, two floors of stone and the remaining upper floors of terra cotta. It will be of skeleton cantilever steel and reenforced concrete construction, standing on caissons extending down to bedrock.

Elaborate waiting rooms are planned for the first floor. Cars will be handled in two elevators. The garage will be operated twenty-four hours daily.

“The increasing demand of loop shoppers, hotel patrons, and people from office buildings for better parking facilities is responsible for the project,” Moseley said. He now operates the Adams-Wabash garage at 219 South Wabash avenue, with a capacity of 300 cars. 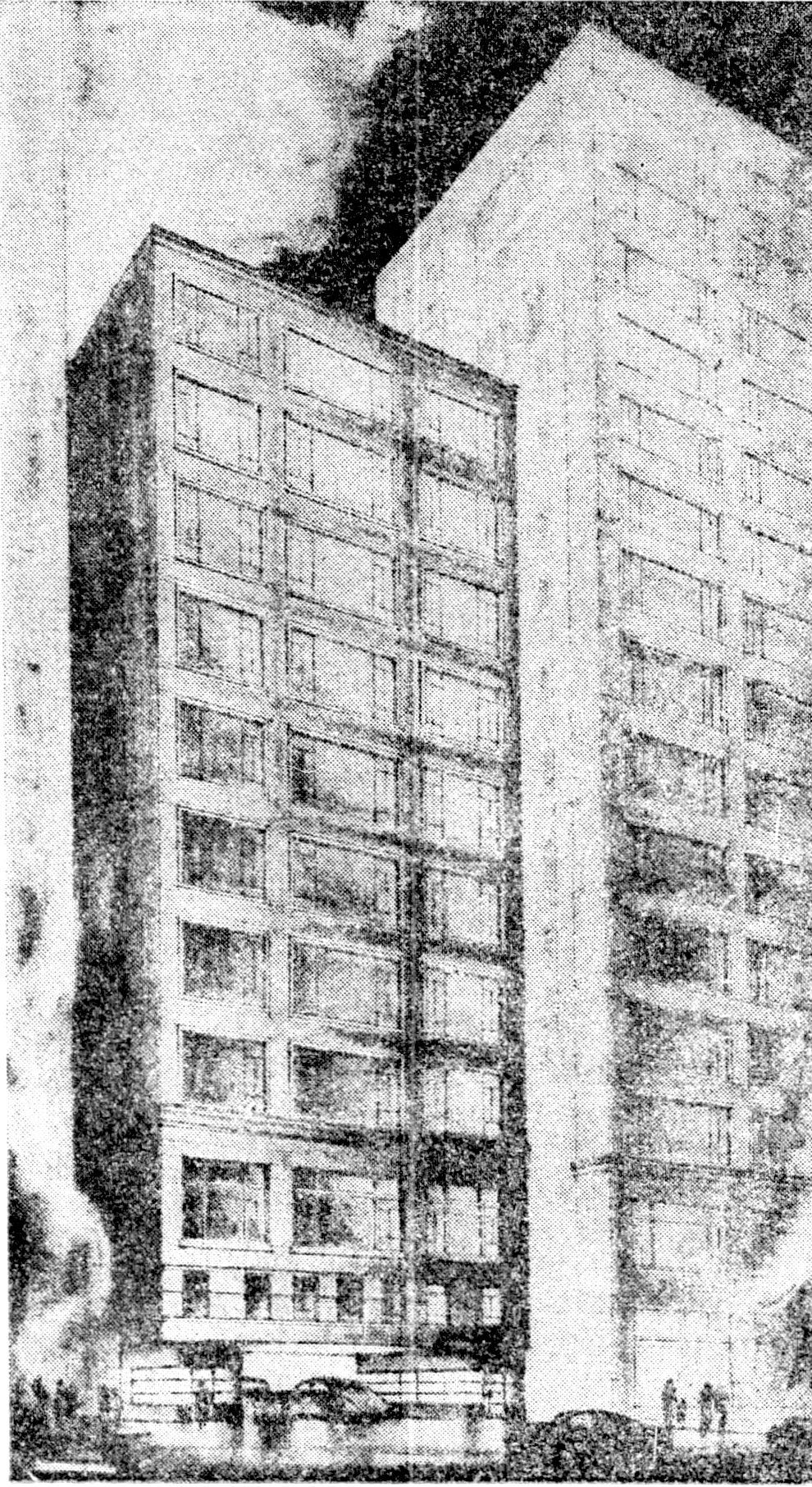 Architect for Several Garages.
Architect Kroman, who planned the new building, has been identified with the design of several big garages, one a 600 car project on the north side and two on the south side of 400 and 300 cars, respectively.

The Chicago club sold the Monroe street property in 1898 to interests who operated the prosperous Columbus club. The leasehold later passed into the hands of David Meyer of Schlesinger & Mayer, who operated a large department store under that name on the present site of Carson, Pirie Scott & Co.’s store.

Leased to De Jonghe Family.
Mayer subleased the property in February, 1908, to the De Jonghe family, who operated what became one of Chicago’s most famous restaurants. The upper floors later were remodeled and used by the De Jonghes as a hotel.

The leasehold interest passed from David to Isaac Mayer and then to Ross Mayer. Later Carson Pirie Scott & Co. purchased the leasehold. It expires Sept. 30, 2001. The land is owned by Mrs. Katherine Adams Wells. 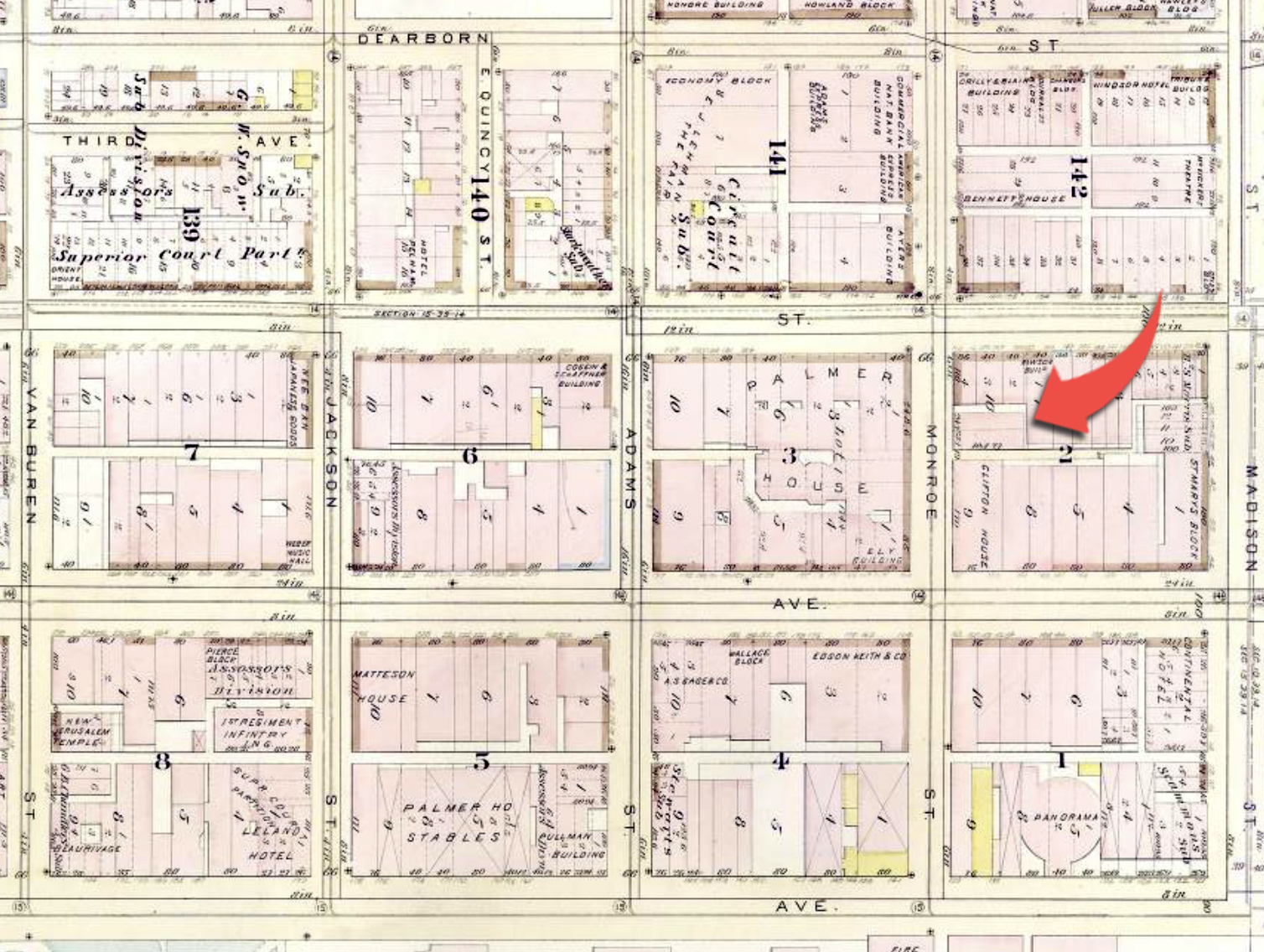 Chicago Club I
North side of Monroe Street, between State and Wabash streets
Robinson Fire Map
1886