The great trouble with Chicago is that it is like a fast growing boy, whose clothes are always too little, let the original proportions be as ample as you like. We make provisions for the present demand, but even before the suit be purchased, the boy has grown beyond the size to which the clothes will fit. We build a school-house in the centre of a given district, calculating for twice the number of children needing educational training when the plans are drawn. By the time that the structure is opened the school is full, and in less than six months comes a plaint to the authorities that hundreds of children are without seats. So with our roads, our horse car facilities, our steam railroads, court house, harbor, fire alarm telegraph, police force, Bridewell, jails, &c. There is reason to fear that even our great lake tunnel will be found too small for the supply of Chicago, though we now consume but between nine and ten million gallons of water daily, and the tunnel, under a heavy pressure, can give out seventy-five million gallons, or enough for a million and three-quarters of people. The water will not have been long set running, before another tunnel will be required; indeed, it is already talked of as a safety measure, in case the present one should at any time fail.

The question of crossing the river is with the people of Chicago almost as perplexing a one as it was to the Israelites when pursued by the Egyptians. If its waters were anything like pure, the Chicago River might be forded, if the cost of bridging is could not be af-forded; but experience shows that this is equivalent to instant death. We build a bridge or two every year, but like the school-houses, their accommodations do not increase so rapidly as the demand. It is a problem of continually augmenting difficulty to get from one Division of the city to the other, as the long lines of vehicles which wait for hours at a nominal crossing practically show. The time lost is waiting is worth millions of dollars a year to a go-ahead Western people while a more fearful deficit is exhibited in the fouling up of the Christian virtues under the heading of “Satan Cr., by profanity — — — — — — souls.”

Some little relief will be given by the tunnel under the river at Washington street, when that is finished, but it will be but partial; relieving principally that section of the South Division lying within one block of Washington, and a little greater width in the West Division. All that great and rapidly growing sections of the city lying south of Madison will be comparatively unaffected by it. About three bridges are scattered along the river, but more are wanted—needed imperatively. The distance from Madison to Van Buren is half a mile within one block, and there are no means of crossing in the interval. From Van Buren to Eighteenth street, a distance of about a mile, we have another river stretch, unbroken by anything except two rickety structures—mere apologies for bridges, on which a team can scarcely be trusted, and whose opening and shutting is almost the work of a decade.

The most pressing want just now is for a bridge at Adams street, to serve the double purpose of saving time and distance to those on or near that street, and relieving greatly those who will continue to cross at the other points north of that. It would be an especial boon to those who travel by the horse cars, and those vehicles would that be patronized by many who cannot now afford wait in line at the bridges, and therefore, foot it. With a bridge at Adams and the tunnel at Washington, they and the Lake street bridge would take the great army of teams and carriages=, and leave Madison and Randolph comparatively free for the home cars.

The South and West Divisions are rapidly filling up southward, and especially in the former the course of trade in moving with no uncertain steps in that direction. What is now a nuisance will soon become intolerable, and ere long the one hundred thousand residents of the West Division will be shut off from all communication with the South, and may be strongly tempted secede and set up a city government of their own. Should the new City Hall be built near the Rock Island depot, as now proposed, the necessity for a bridge at Adams street will be still more imperative, and will admit of no further delay.

It should be remembered that the longer the construction of a bridge at Adams street is deferred, the more difficult will it be, the more expensive to the city, and the more awkward to deal with vested interests. The bridge is wanted now and every month that it is delayed tens of thousands of dollars are lost to the citizens of Chicago, in the destruction of that time which, to the business man, is always money.

Adams street bridge is now completed, with the exception of about fifty feet of planking on the viaduct over the Pittsburgh and Fort Wayne railroad. It is expected that this portion of the work will speedily be finished. 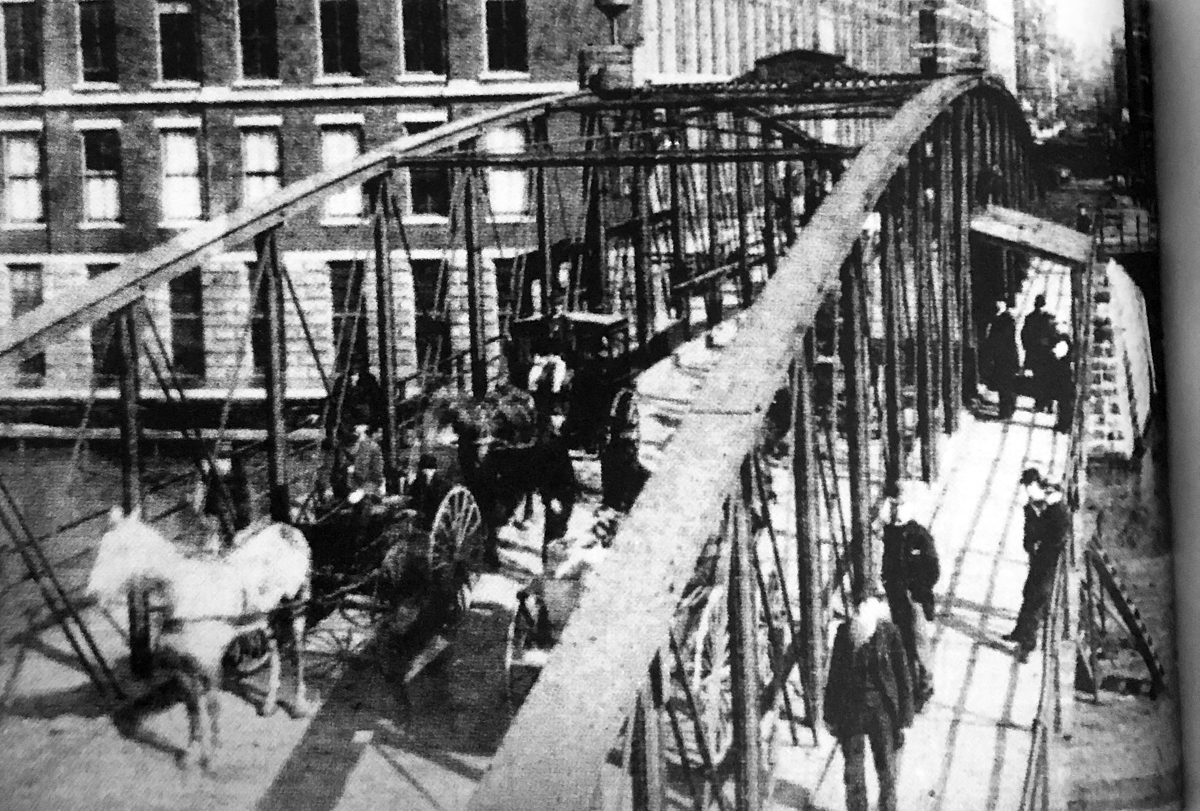 ADAMS STREET BRIDGE
Work on the new Adams street bridge is progressing rapidly, and it is hoped the structure will be ready to swing by the end of the month, if not before. The bridge is almost a counterpart at Jackson street, one arm crossing the river and the other stretching across the tracks and joining the viaduct at the Union Depot. The main trusses are in place, and the tie rods are rapidly arriving. It is the intention that this bridge shall swing either way, in which respect it will be a vast improvement on the system followed in the Jackson street bridge, of only swinging the bridge one way.

Diagram of Track and Bridge Layouts at the Union Depot

The completion of the new bridge will of necessity releases Madison street bridge of considerable street car traffic, and will prove a boon to suburban residents and others who use the Union Depot. At the present time, if they take an Adams street car at State they have to slight at Jackson street and walk across the bridge and one block north to the depot, or else take a Madison street car and run the risk being run over while crossing at Canal street, for there is an almost continual stream of cars going both ways at that point.

It was assured when the new bridge at Jackson street was built, that the shifting of the center pier of the bridge from the center of the river to the west side would prove beneficial to river men, as it would give them a clear stream in which to navigate their vessels. While in one sense this may be true, in another it is not, as more than the width of the old center pier was taken from the west side if the river in constructing the new one, in addition to which the new pier forms such an obstruction to navigation on the west side of Van Buren street bridge that an ordinance was passed by the City Council to widen the river at that point.

As yet no attempt has been made to carry that undertaking out although it seems as if some measures should be speedily taken to facilitate navigation at that point, and thus prevent the possibility of an expensive if not disastrous collision, which seems at times almost inevitable when two large steamers are trying to pass there. 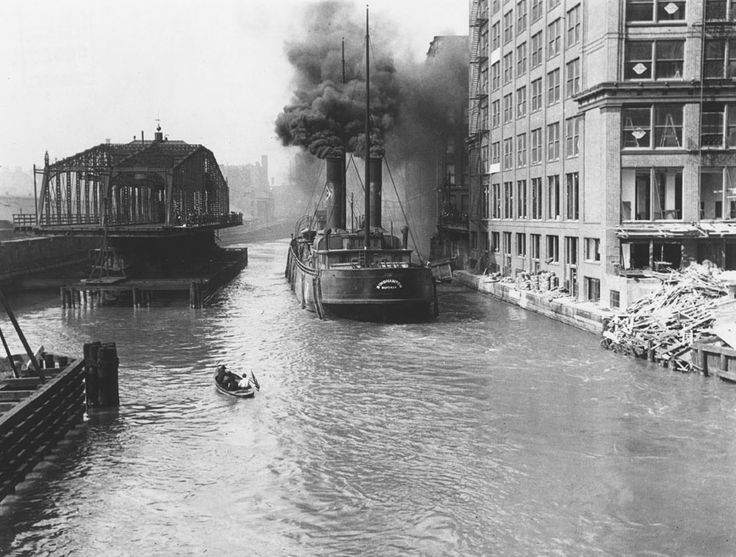 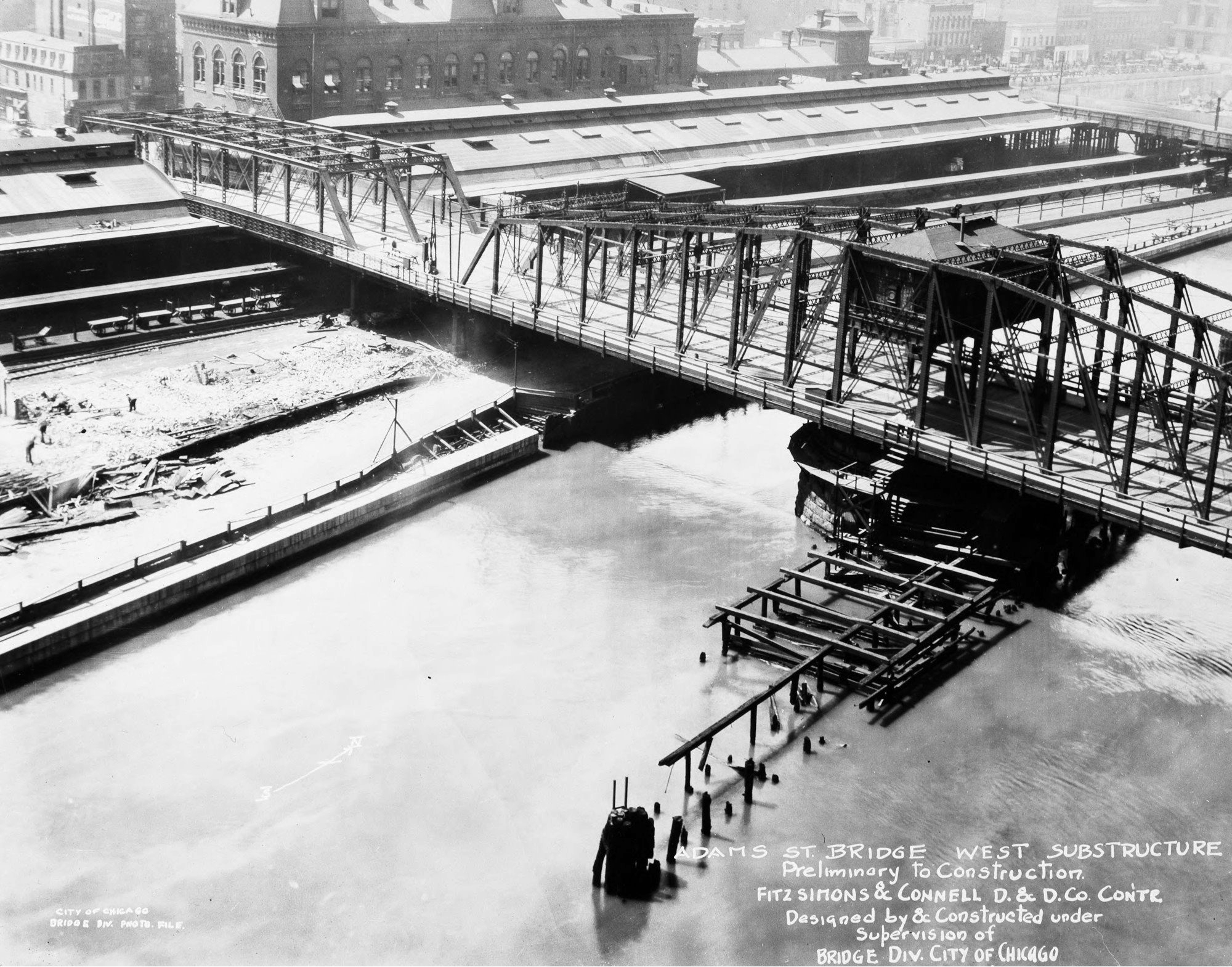 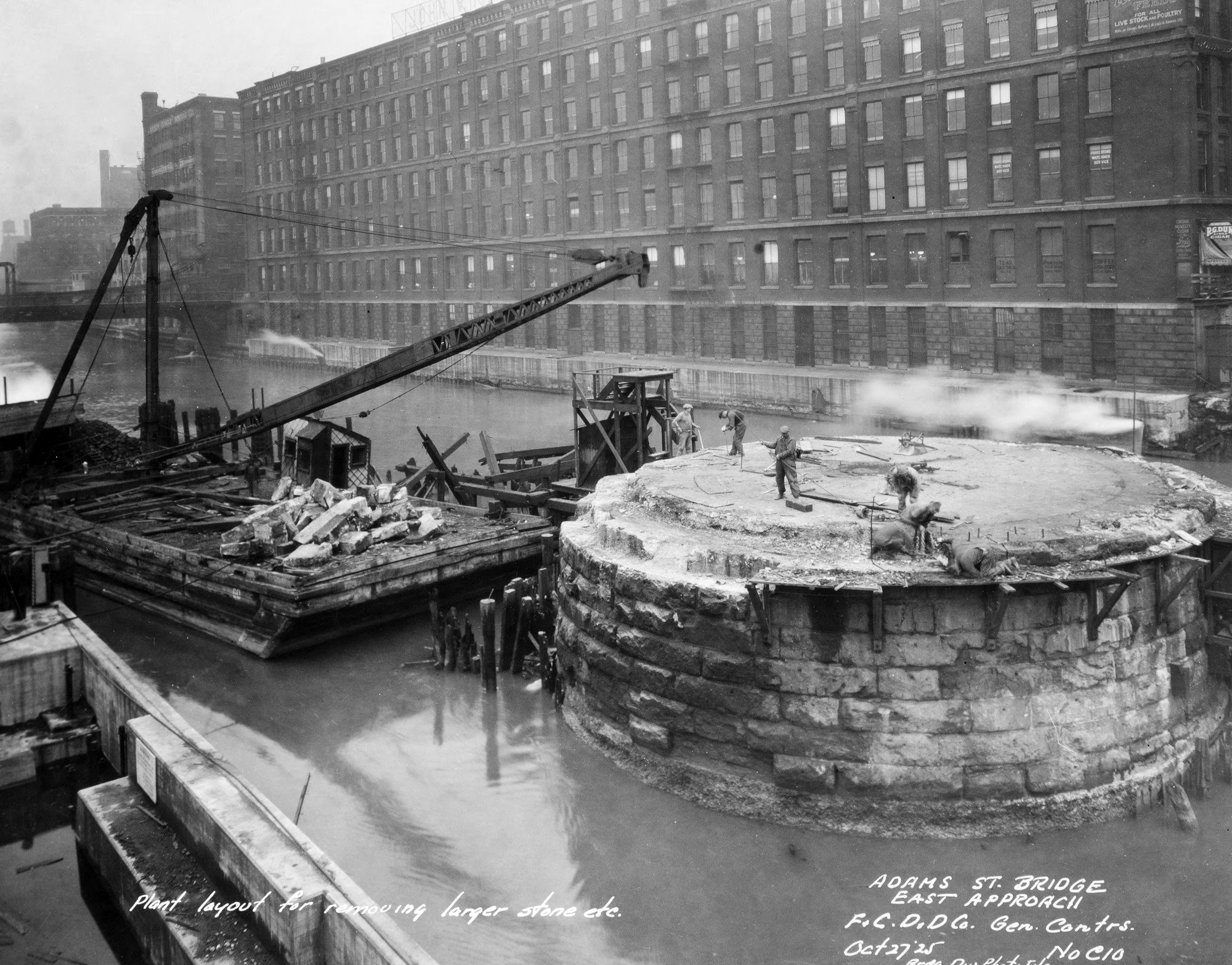 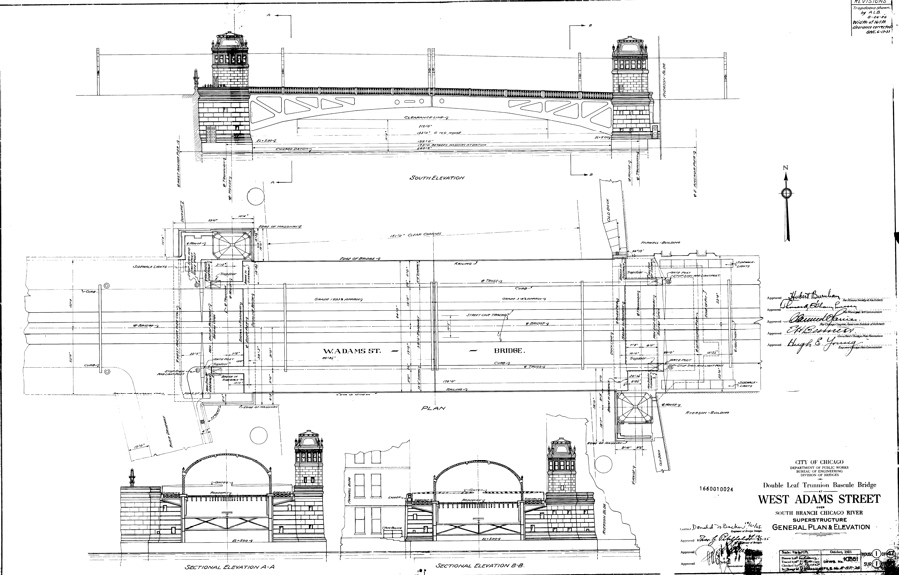 A steady stream of traffic poured over the new Adams street bridge last night following its formal opening at 2 p.m. when Mayor Thompson, with a pair of golden shears, snipped a ribbon stretched across its center.

Nearly 1,000 boats and cars joined in a parade from Grant park preceding the ceremony and a crowd of 5,000 watched the ribbon-clipping and cheered the speeches of Mayor Thompson, Commissioner of Public Works Wolfe and Deputy Commissioner Edward F. Moore.

The new span cost $2,500,000 and has been under construction since 1923. It is 265 feet long, rests on piers sunk to bedrock 95 feet below the street level, and is equipped with the latest electrical safety devices. 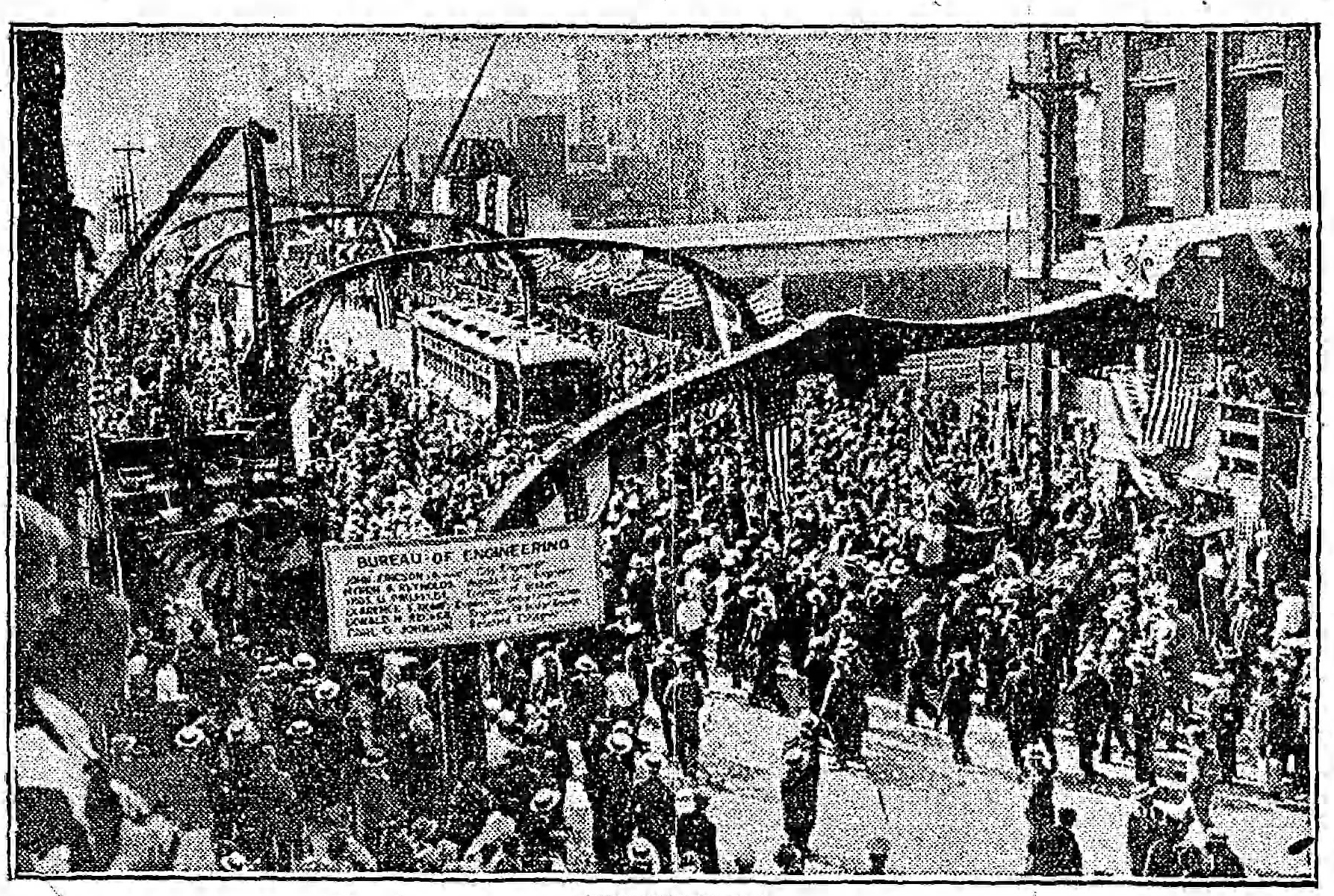 NEW ADAMS STREET BRIDGE THROWN OPEN TO THE PUBLIC.
Crowd watching the first street car cross the structure which was dedicated yesterday by Mayor Thompson with ceremonies in which business men along the street participated.

Buckingham Fountain was also dedicated on this day.