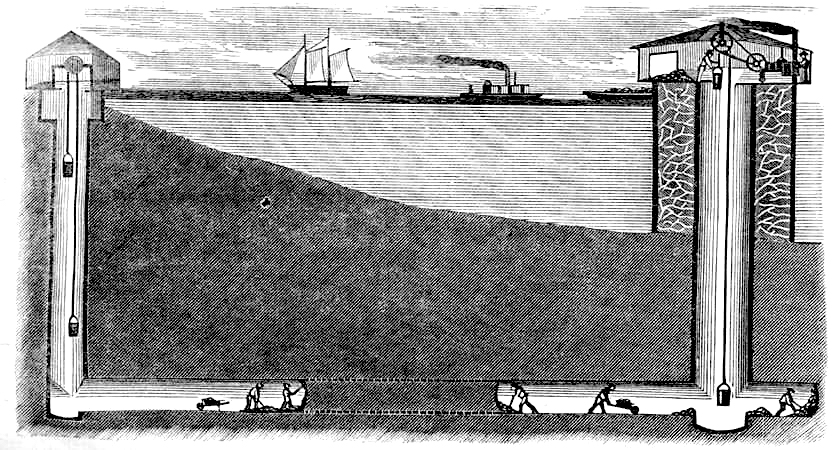 By 1860, the city’s population had burgeoned to over 100,000, and the Chicago River had become a veritable cesspool as raw sewage and waste from the numerous slaughter houses and other industries flowed freely into it. With a significant number of its citizens dying from cholera and typhoid fever, the city hired Ellis Chesbrough in 1861 to serve as the Chief Engineer of the newly formed Board of Sewage Commissioners and tasked him with improving the city’s water supply and sanitary systems.

Chesbrough’s plan called for the excavation of a supply tunnel to connect a pumping station situated five miles inland to an intake crib located two miles out into Lake Michigan, well beyond the increasingly polluted shoreline. Dull & Gowan of Harrisburg, Pennsylvania signed a contract for the massive project on October 28, 1863. Construction began in May 1864, while miners and workers worked 24 hours a day and six days a week. The total completion of the project was on March 1867 and costing the city $380,784.

A wooden, double-walled crib, pentagonal in shape and with a height of forty feet, was built on shore and then towed into the lake by steam tugs and sunk in position by filling its hollow walls with stone. A cast-iron caisson was lowered inside the intake crib, appropriately named Two Mile Crib, and then driven into the lake floor. After the water was evacuated from the caisson, workers entered and excavated a vertical shaft to the prescribed depth before tunneling horizontally to meet the passageway being extended from shore.

Centered atop the crib was a rectangular building that contained a kitchen and bedrooms for the crib keepers along with storage space. Above this structure was a square tower that supported a birdcage lantern for displaying a light to warn mariners away from the manmade navigational hazard. The crib was also equipped with a fog bell that was struck once every minute during periods of poor visibility. Keepers lived on the crib year-round to tend the light and fog bell, and to operate the intake doors in the crib and keep ice from forming inside the crib.

The tunnel was completed on November 30, 1866, and the water system commenced operation the following year. Although the City of Chicago was responsible for maintaining the light and fog bell on the crib, these navigational aids did appear on the Lighthouse Service’s official List of Lights. In 1877, the Lighthouse Board noted that a proper light should “be placed upon the crib at the outer end of the tunnel of the Chicago water-works, to replace the present inefficient one, not under the control of the Light-house Establishment.” Four years later, the Board noted that they had reached an agreement with the City of Chicago to furnish the crib “with a third-order lens, lamps, &c, and set them in working order when the city builds the tower and lantern.” 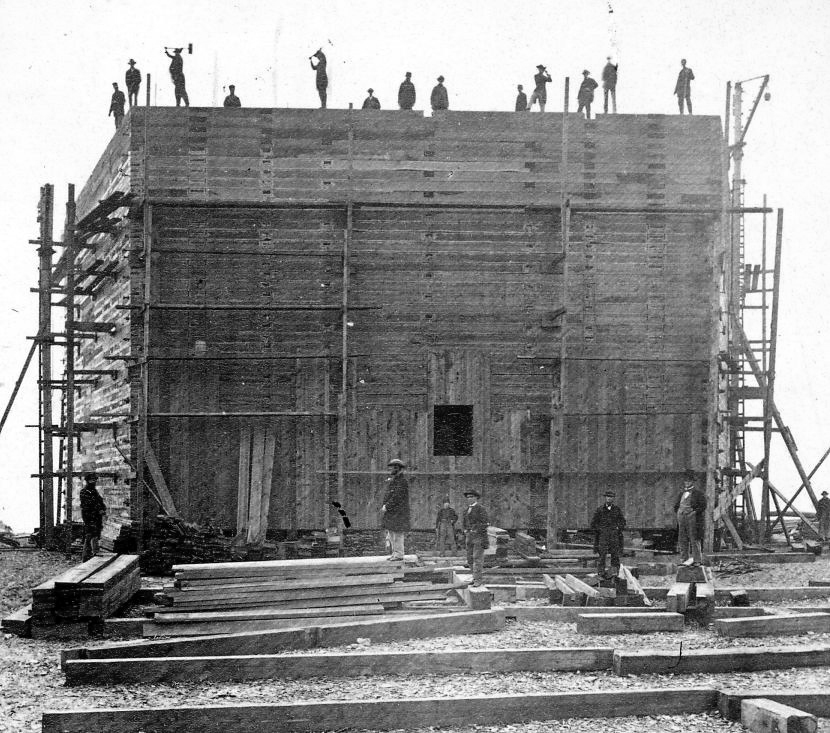 Building the tower. Cribtenders lived in these offshore structures. Photo by John Carbutt 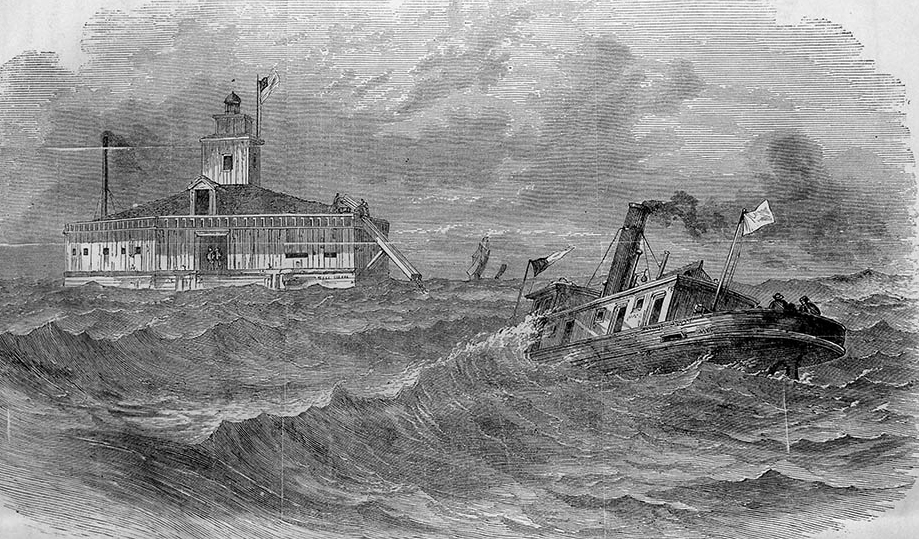 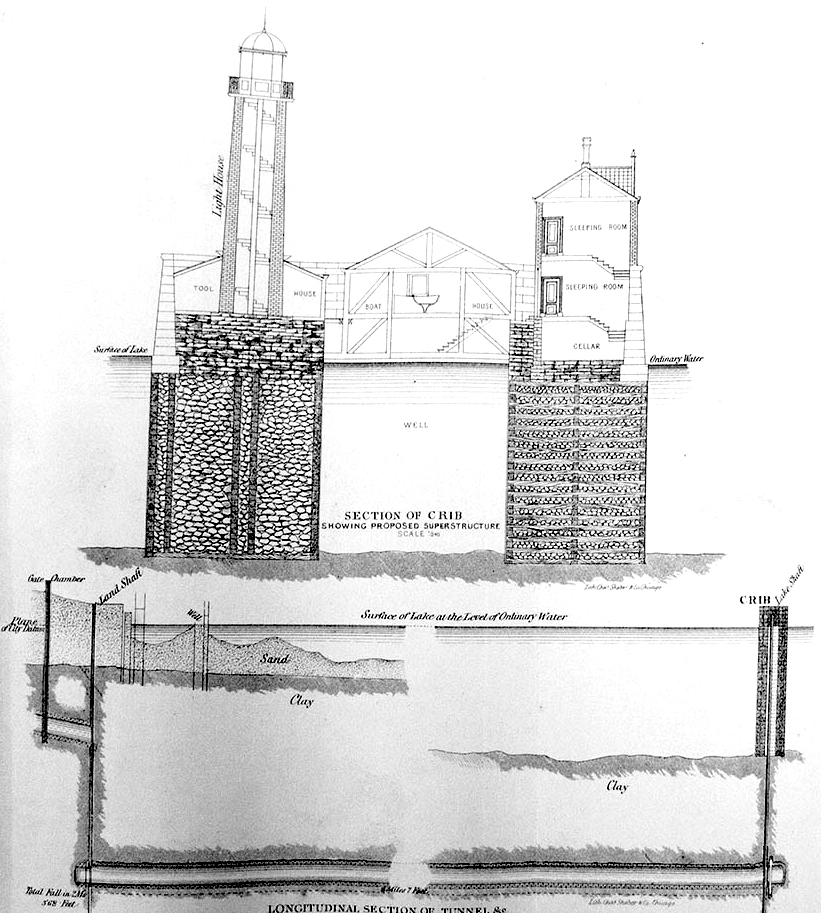 Cross section illustration of the two-mile crib and tunnel, from the 1869 Annual Report of Chicago’s Board of Public Works. 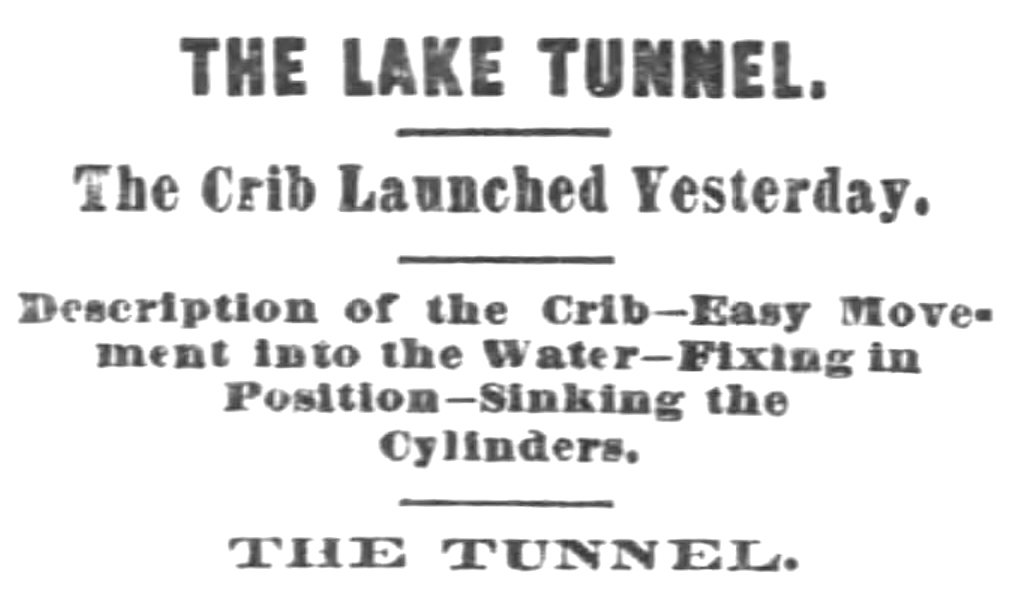 The launch of the giant crib for the East end of the great lake tunnel was safely accomplished yesterday morning, after innumerable delays, extending through a period of several weeks. It was done so neatly and so easily as to astonish every one among the thousands who watched the passage from its native element into the water. It will be observed that we invert the usual phrase, according to which a vessel is native in the element to which it emegrates—a phrase, by the way, quite foreign to the subject.

It is now some weeks since the time first fixed upon her launch; first bad weather, then an accident, then bad weather, then more bad weather, then a breaking up of the sliding ways by collision with a vessel, and still again, another touch of bad weather, caused collectively a long delay. Very many of those who read the announcements that the launch would positively be made yesterday, disbelieved it, as the morning broke ominously; but for this fact the crowd would have been much greater. Yet there was no lack of attendance, and spite of the threatened wind and rain, the murky clouds, and the angry waters of the lake, the erecting contractor—Mr. Gowen, decided to venture, and was rewarded in one of the most complete successes on record.

The crib lay on the North Pier, a few rods west of the lighthouse, where it had been constructed, and where no doubt a majority of our citizens have seen it, either closely or at a distance. The latter was no difficult task as its huge unwieldy proportions made it a very conspicuous object. The monster resembles nothing at all, either in the heavens above or the waters beneath, and the only conceivable parallel would be the appearance of Gulliver’s Brobdingnagian box dropped down among the Lilliputians—the chances are that its advent there would have forever silenced their squabbles by breaking their egg at both ends, crushing them to atoms, and driving their island out of sight. It is certainty a monster egg for any ordinary mortal to break, and whichever end he he might essay he would find it a big one; let us hope that the chicken proposed to be hatched will prove it to be worth the trouble. 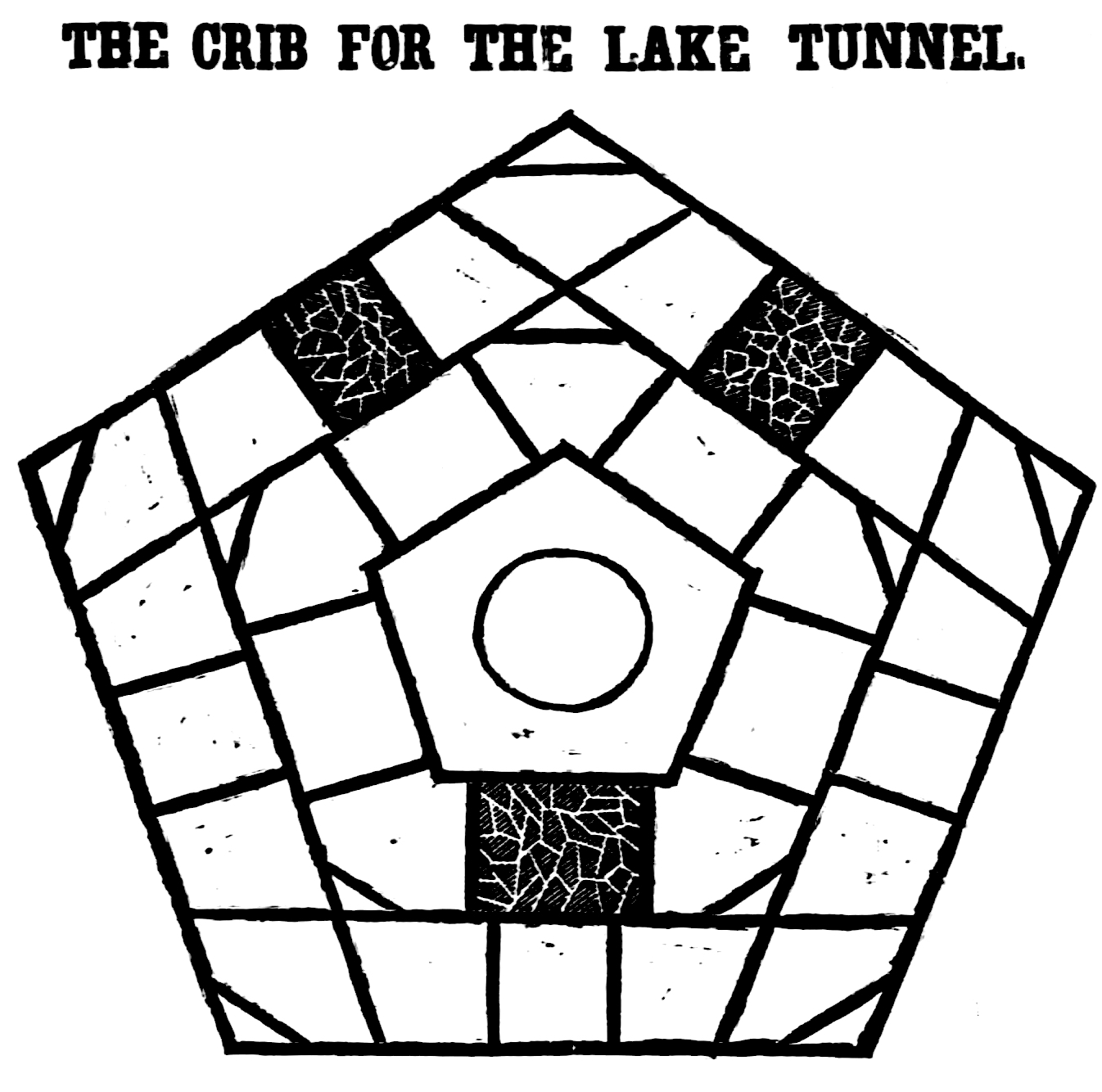 The crib is forty feet and a half high, and built in pentagonal form, in a circumscribing circle of ninety eight and a half feet diameter. We have previously described its construction minutely, and anything more than a brief recapitulation is therefore unnecessary. It is built of logs one foot square, and consists of three walls, at a distance of eleven from each other, leaving a central pentagonal space having an inscribed circle of twenty-five feet, within which will be fixed the iron cylinder, nine feet in diameter, to run from the water line to the tunnel, sixty-four feet below the surface and thirty-one feet below the surface and thirty-one feet below the bed of the lake at that point. The crib is thoroughly braced in every direction, so that it might be tumbled over and over without injury. It contains 750,000 feet of lumber, board measure, and 150 tons of iron bolts; it weighs about 1,800 tons. The outside is thoroughly caulked, equal to a first class vessel, with three threads in each seam, the first and last being what is called “horsed.” Over all these there is a layer of lagging which will keep the caulking in place, and protect the crib proper from the action of the waves. Above is a diagram of the crib, (horizontal section) with the cylinder inside.

The crib was placed on seven ways, each one hundred and forty feet long, dipping down into the water on the incline of one inch to the foot. It was let down on these two by two hundred and fifty screws, similar to those used in house moving and raising. At an early hour yesterday all the screws were got in position, and the ways greased. Nothing remained but the presence of the invited guests, to allow the great slide being taken.

The scene was decidedly a gay one. Seven tugs steamed about the mouth of the harbor, filled with eager spectators, small boats innumerable played on the surging water, the decks and rigging of numerous sail vessels were covered and filled, and the shore for a long distance in each direction was comfortably crowded. A vast amount of speculation was indulged in while the preparations were in progress, as to the success of what everybody

The tug, A.B. Ward, having on board Governor Oglesby, Col. Bowen and Col. Snyder of the Governor’s staff, U.P. Harris, Dr. Brainerd, several members of the Common Council, and the usual sprinkling of representatives of the Press, was the first to make the circuit of the crib, and soon with the tug Continental took a “line” and commenced to tow out the crib to its final resting place. This occupied about an hour and a half, the journey being rendered rather disagreeable by the drizzling rain which set in, and a decent swell, which, however, did not materially retard progress. Before noon the crib was in position, two miles from shore, in the middle of the anchors put down several days before, and whose places were marked by buoys, the lines cast off, and the tugs preparing to return to the city.
The only accident occurring to the party was a small one to the tug S.V.R Watson, which got her screw entangled in one of the buoys, and was unable to get clear till a boat was procured form shore; her passengers were transferred to the Ward. It is worthy of remark in this connection that no accident involving personal injury has occurred since the commencement of the work, nearly two years ago.