Work on an elaborate fountain, the gift of Miss Kate Buckingham, art patron, in memory of her brother, Clarence Buckingham, will begin shortly in Grant park, it was announced yesterday by the firm of Bennett, Parsons & Fost, architects, who designed the memorial.

In artistry it may be likened somewhat to the famous fountain of Latona in the garden of Versailles, although it will be twice as large and the flow of water three to four times as great. In design it follows the traditions of projected and realized in the eighteenth century.

It is to be in a garden 600 feet square. Four smaller pools will surround the main pool, which is to be 300 feet across. In the main pool there will be three basins, rising one above another to a height of twenty-five feet.

In the main fountain there are seventy-two jets, which will discharge 1,600 gallons of water a minute for everyday displays and 5,500 gallons on holidays and special occasions. At night colored lights will play on the waters.

It will be located in Grant park east of the Illinois Central tracks, on a line with Congress street. The general scheme was accepted by the south park commissioners last year. After many months in perfecting designs, experimenting with water jets, and arranging a system of lighting, the project is ready for construction.

It is expected that the fountain will not be ready for dedication and presentation for a year.

It will be known as the Buckingham memorial fountain. 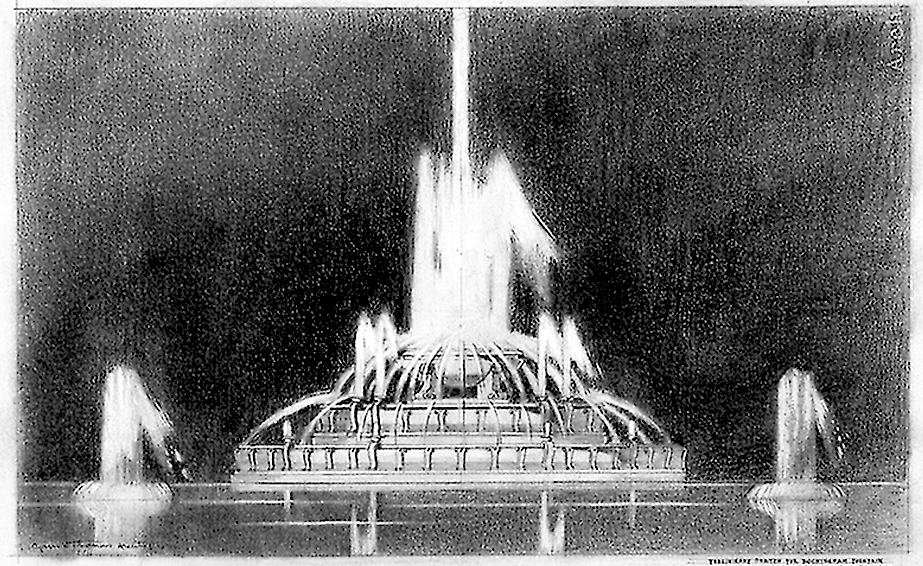 PLANS FOR BUCKINGHAM MEMORIAL FOUNTAIN IN GRANT PARK AT CONGRESS STREET COMPLETED.
The picture, made from a drawing by Bennett, Parsons, and Frost, the consulting architects, shows how the fountain will look on ordinary occasions. The money was left by Miss Kate S. Buckingham to honor her brother, Clarence.

John Philip Sousa conducts “Stars and Stripes Forever” on a terrace east of the new Buckingham Fountain as the fountain is dedicated before 50,000 Chicagoans. And “As though responding to the direction of the bandmaster and the magic of his baton, the fountain began to glow with misty blue lights circling each of the three tiers. A moment later the rush of water started. For an hour the lights were played on the 134 jets, through which 5,500 gallons of water were poured each minute, and all the various lighting effects were displayed.” 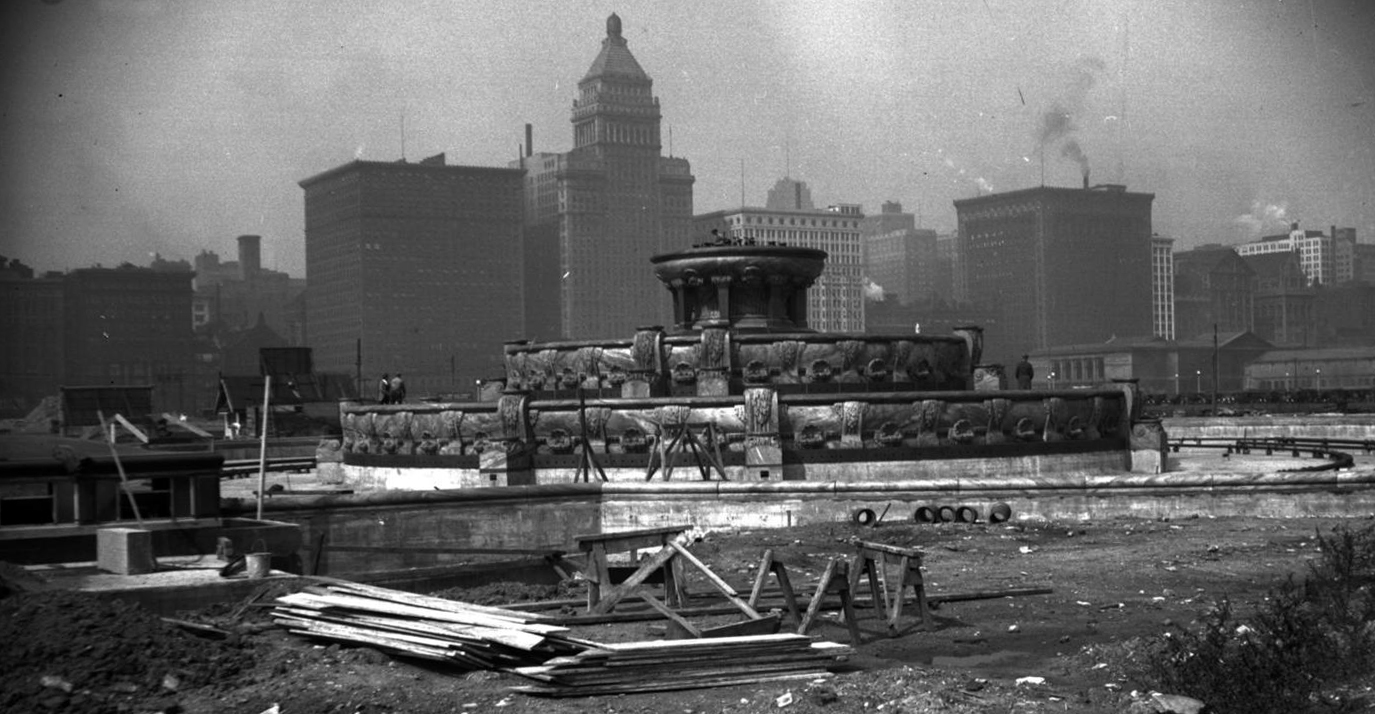 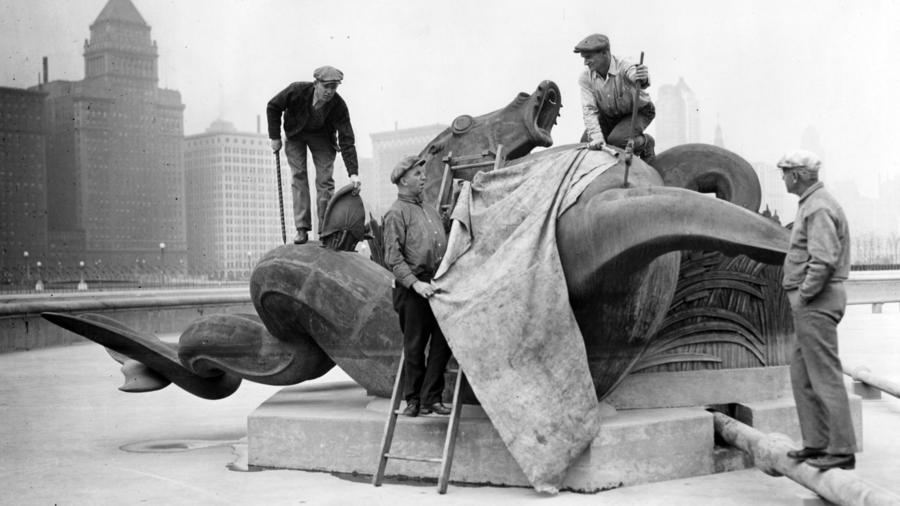 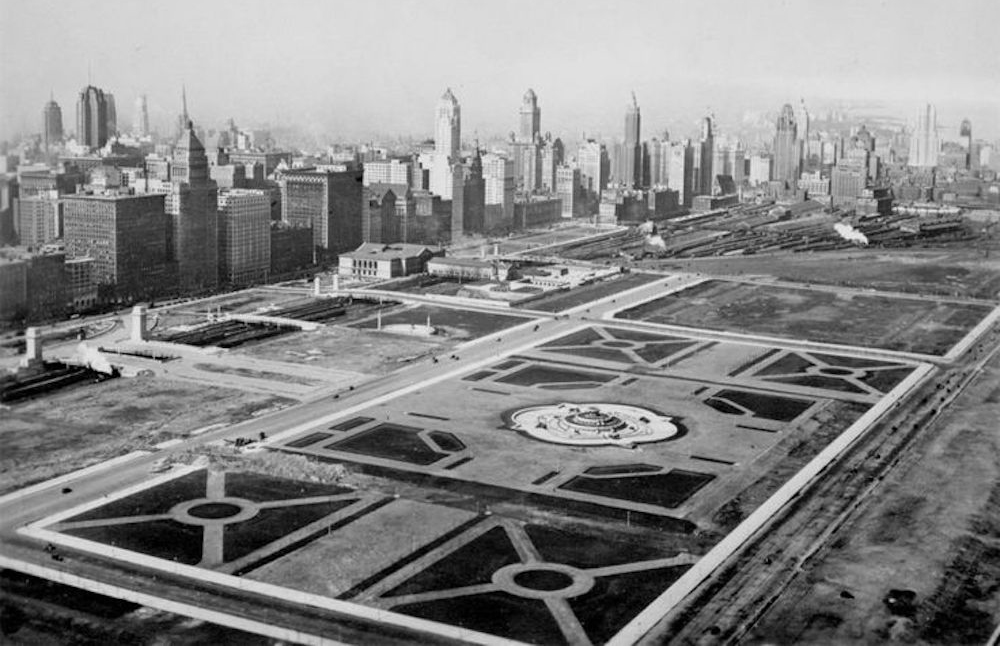 THE NEWEST JEWEL IN CHICAGO’S CROWN, the $700,000 Buckingham fountain pictured from the air in its Grant parkmsetting against the monumental Michigan boulevard skyline. As it appears here the fountain is in the quieter mood of minor display; it attains sublimity in full play, with its jets soaring skyward to the peak mof 140 feet and rivaling the rainbow at night in vari-colored glow. 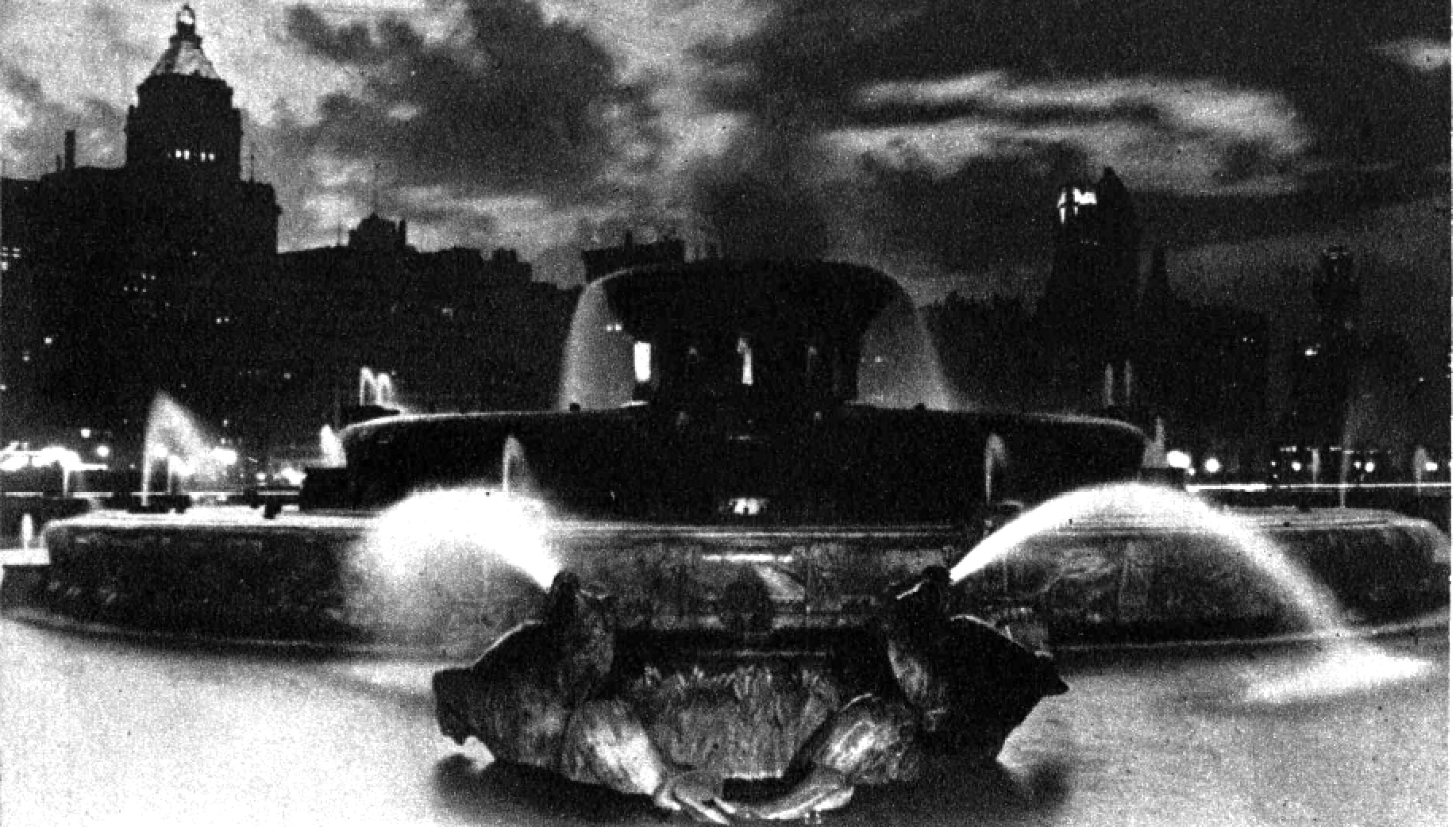 “Front Yard” by Edward McGill, of the Tribune staff.

OF all the gorgeous spectacle places witnessed by Robert and Peggy during their stay in Chicago as World’s Fair Visitors, none perhaps appealed to their youthful love for color so much as their view of the Buckingham Memorial Fountain by night. Not only children, but grownups gaze in awe as this great fountain plays its mighty streams of water into the air under a myriad changing colored lights. The children were in Grant park, just north of A Century of Progress Exposition, promptly at 9 o’clock in the evening, when the fountain !urned into a magnificent cascade of all of the co!ors of the rainbow. Uncle Jack explained that the fountain contained 134 separate jets and spouted 14,000 gallons of water into the air every minute during a major display pointing out the eight huge bronze sea horses around the margin of the great pool.

“The real sea horses at the aquarium are tiny things,” Peggy pointed out “These bronze ones are big enough to ride.” 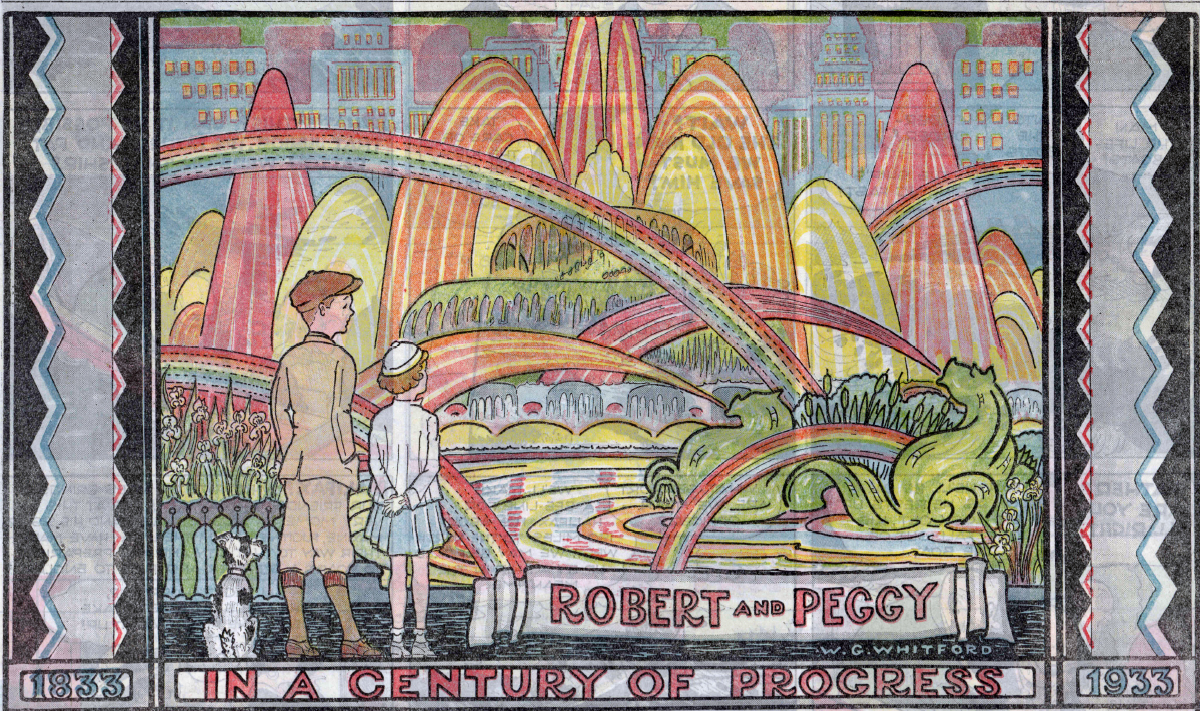 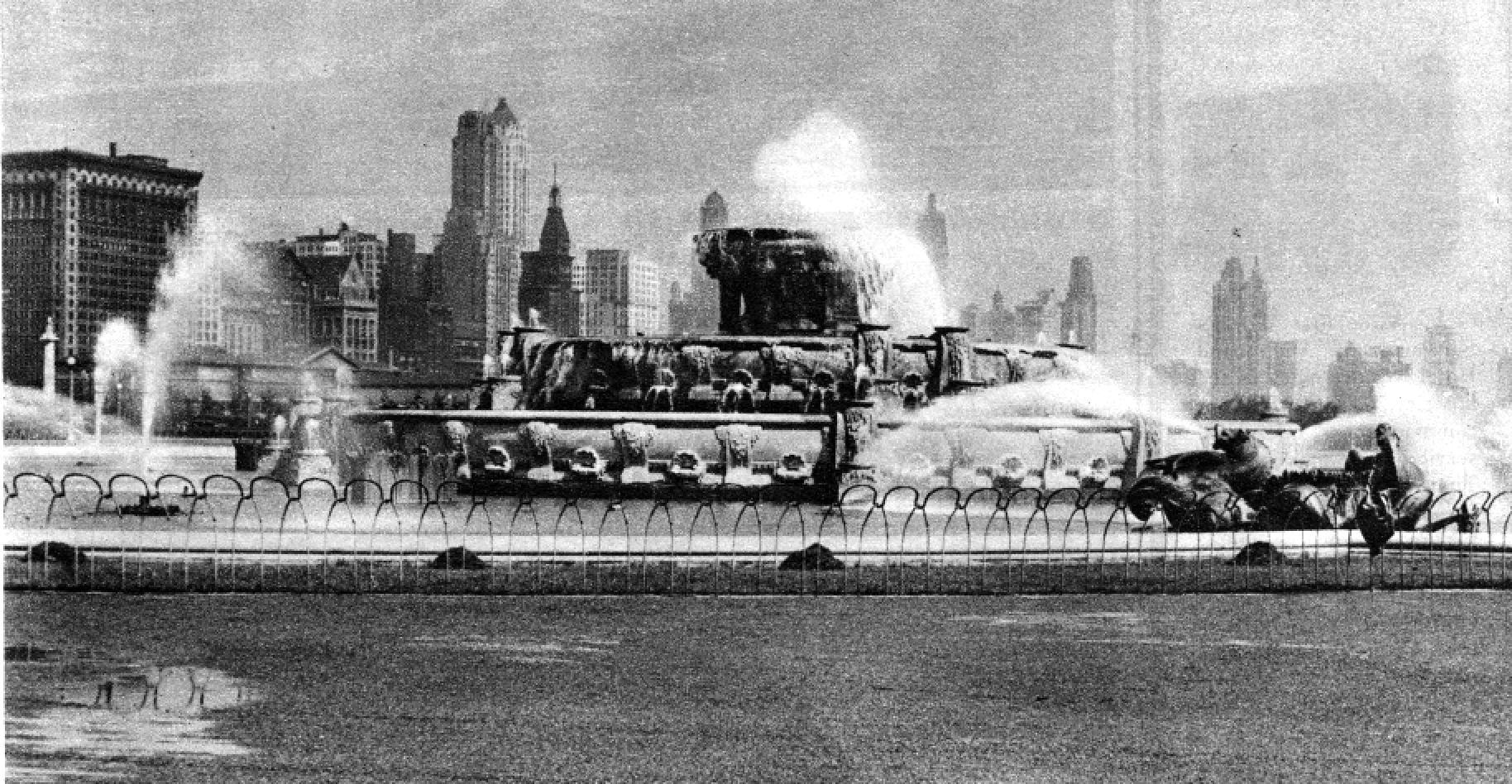 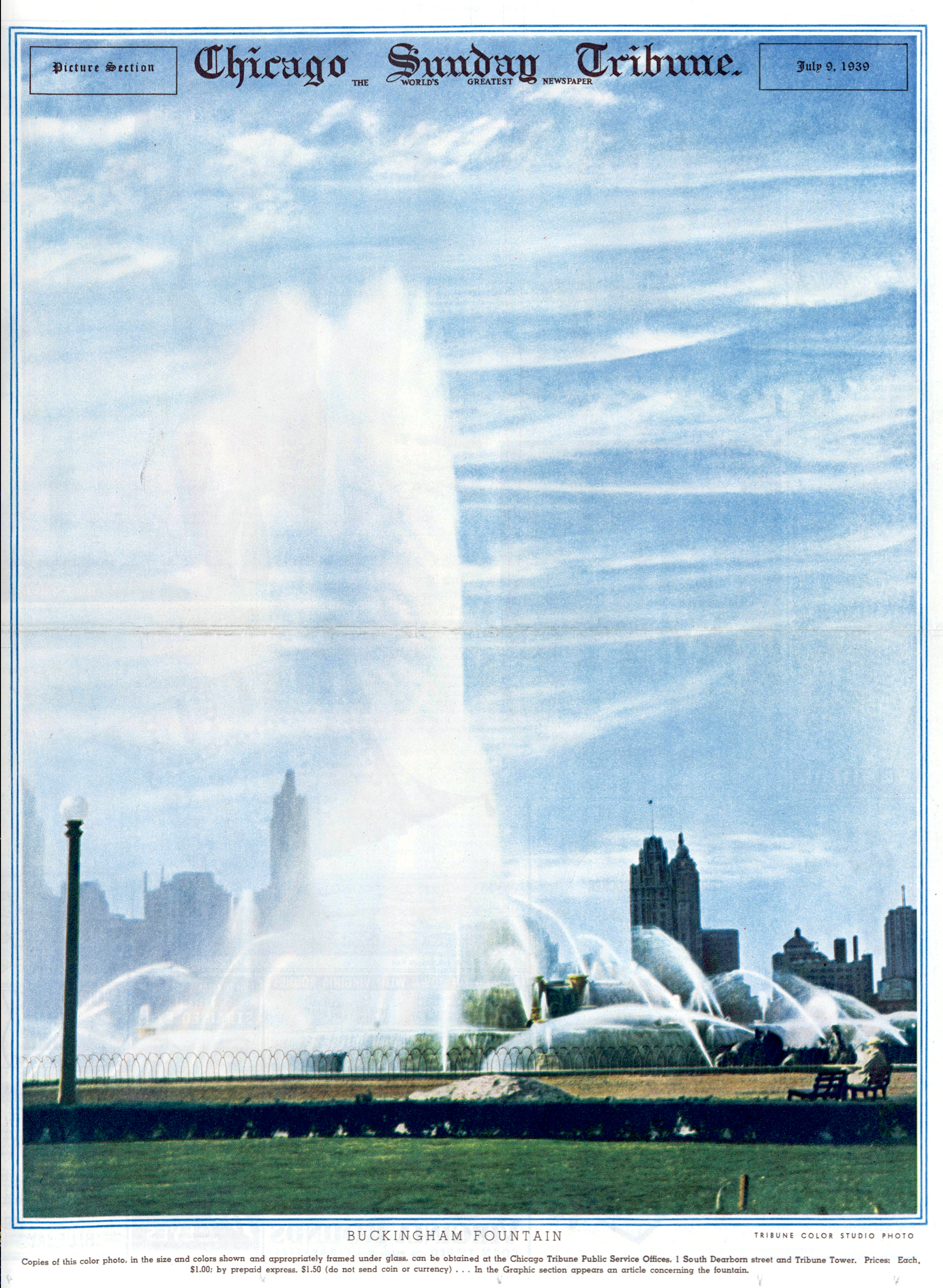