HARVESTING MACHINERY.
DEERING’S MARSH HARVESTER WORKS.
During the year 1880 many new and large manufacturing establishments have been added to the industries of our city, and among them perhaps the most important to the trade and commercial interests of the West, as well as largest in point of capital invested, are the works erected by Mr. William Deering in North Chicago, upon the North Branch of the Chicago River, between it and the Chicago & Northwestern Railroad. Mr. Deering, of the late firm of Gammon & Deering, in search of better facilities of manufacture and transportation, purchased twenty-five acres of land in this locality, and, building shops, warehouses, and also a large number of cottages and two boarding-houses for the accommodation of his employes, removed his business from Plano, Ill., where his shops have for many years been located. The main shops are 366 feet in length by 50 feet wide, with an annex 70 feet long by 60 feet wide, each being three stories in height. Connecting with the main building are also two wings, one for the foundry work, being 140 feet long by 60 feet wide, and another 170 feet long by 50 feet wide, for the smith work. In a separate building are three large boilers and a Corliss engine of 300-horse power and a 24×48 inch cylinder. The machinery is of the latest and most improved pattern, and Mr. Deering evidently considers it the truest economy to produce the best machinery to be procured. Two large warehouses are built along the Northwestern Railroad tracks, and have a combined length of 320 feet and a width of 85 feet, and arranged to accommodate the loading of 13 cars at any time. In general it might be said that these shops exhibit a completeness of manufacturing facility unequalled among those devoted to the making of harvesting machinery in the West, being supplied with every modern appliance to make them complete and capable of producing good work in the most rapid, economical, and thorough manner. The buildings are heated by steam, and the most perfect appliances for the prevention or control of fires have been introduced. The specialty of of these works in the manufacture ofb the celebrated Marsh harvester and Deering twine self-binding harvester. 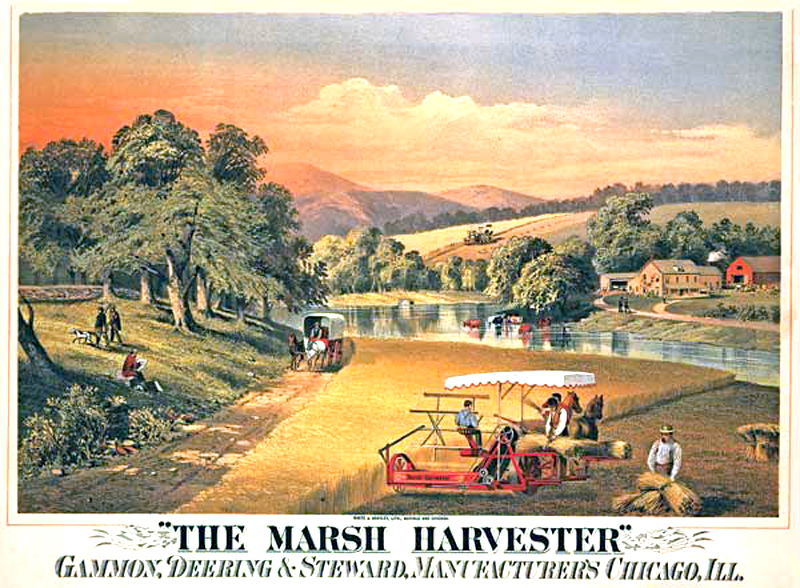 The first Marsh harvester was made in 1858, and first in the shops of this Company, at Plano, in 1864. This machine was the forerunner of a system adopted by every manufacturer of harvesters throughout the world. Besides these, Mr. Deering makes many other machines, and has now in process of construction 8,000 harvesters, 7,000 self-binders, and several thousand other miscellaneous machines, such as self-rake reapers, mowers, droppers, etc. Mr. Deering has also added to his line of manufacture a reaper, and convinced that the “Leader” reaper of the Harris Manufacturing Company of Janesville, Wis., is one if the best made, a purchase has been effected by which his volume of business is increased by that of another extensive manufactory. Thus by the production and successful introduction of the Marsh harvester and its accompanying automatic self-binder have the markets of the world been benefitted, and by rendering feasible the utilizing of our cheap Western lands our farmers can successfully compete with the markets of the Old World and the costs there of native cereals, this being possible by the cheap and economical harvesting machinery placed in their hands by the Marsh Harvester proprietors. 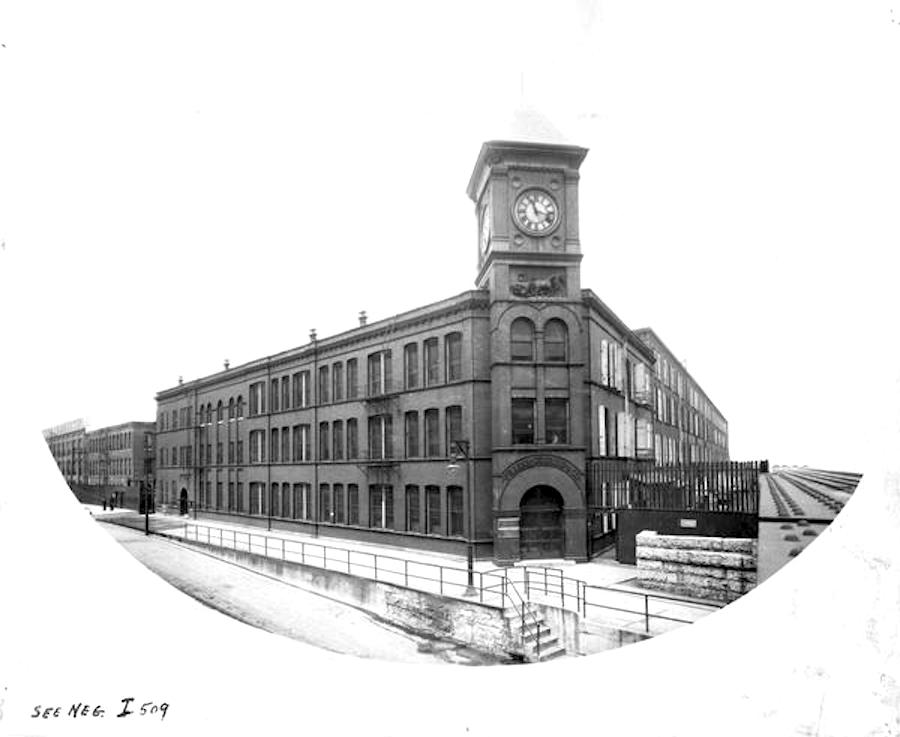 William Deering & Company factory as viewed from across Fullerton Avenue
1900 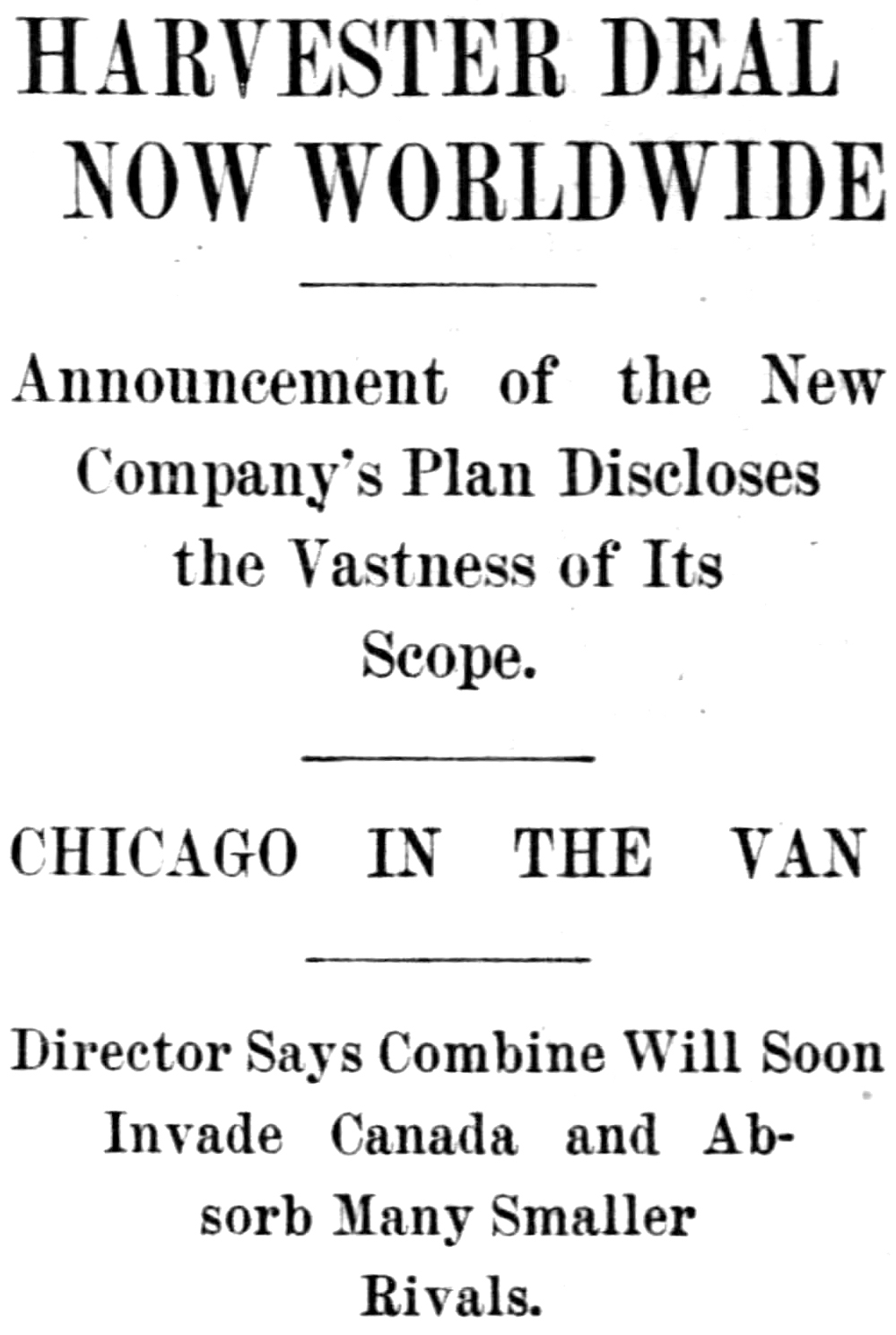 Details of the formation, operating plans, scope, and purposes of the International Harvester company were made public yesterday and include the immediate absorption of five of the largest harvesting machine and agricultural concerns in the country, including the two great enterprises in Chicago. When the merger of these huge manufacturing plants is completed it is anticipated that the combination will reach out after the smaller concerns and ultimately invade Canada.

The headquarters of the combined company will be in Chicago.

As announced with the filing of the articles of incorporation at Trenton, N.J., on Tuesday, the capitalization of the corporation is $120,000,000 common stock in shares of $100 each. The company is said to be capitalized upon an exceptionally conservative basis. Of its assets $80,000,000 are in cash working capital. The company will require no financing and there will be no offer of its stock to the public, all the cash required having been provided by its stockholders.

Companies Involved in Merger.
The International company is a merger of the following agricultural implement companies:

The officers of the company are:

According to the articles of incorporation of the new company if two-thirds of the stockholders vote an increase of stock such increase shall be common stock, and the original stock will at once become 6 per cent cumulative preferred. This provision was made to prevent additional stock being put ahead of the original stock.

Make 700,000 Machines a Year.
The annual output of the five plants in the combine approximates over 700,000 machines. They employ fully 20,000 men. The annual output of the McCormick company exceeds 300,000 machines, the Deering company places in the market annually 250,000, the Champion company over 75,000, the Plano company 50,000 and the Milwaukee Harvesting company 40,000. One of the first of the outside concerns which it is declared will be taken into the combine is the Aultman-Miller company of Aakron, O., manufacturers of the Buckeye mower and reaper.

Five Dominant Harvester Market.
Although the merger includes at present only five companies its capitalization is nearly to the capital of the total number of agricultural machinery and implement manufacturing companies in the United States. There are in all 715 companies in the United States with a total capitalization of $157,707,951, but all but a few of these are small, local concerns. The McCormick Harvester Machinery company was founbded in 1847 by Cyrus H. McCormick, father of the president if the combine. The plant covers seventy-five acres of ground. The Plano company was established in 1893 by Marsh, Steward & Co. for the manufacture of the Marsh harvester. In 1870 the company became the Gammon & Deering Co., which continued until 1879, when William Deering left the company , and coming to Chicago, founded the Deering company. The Deering company is located on the north branch of the Chicago river. 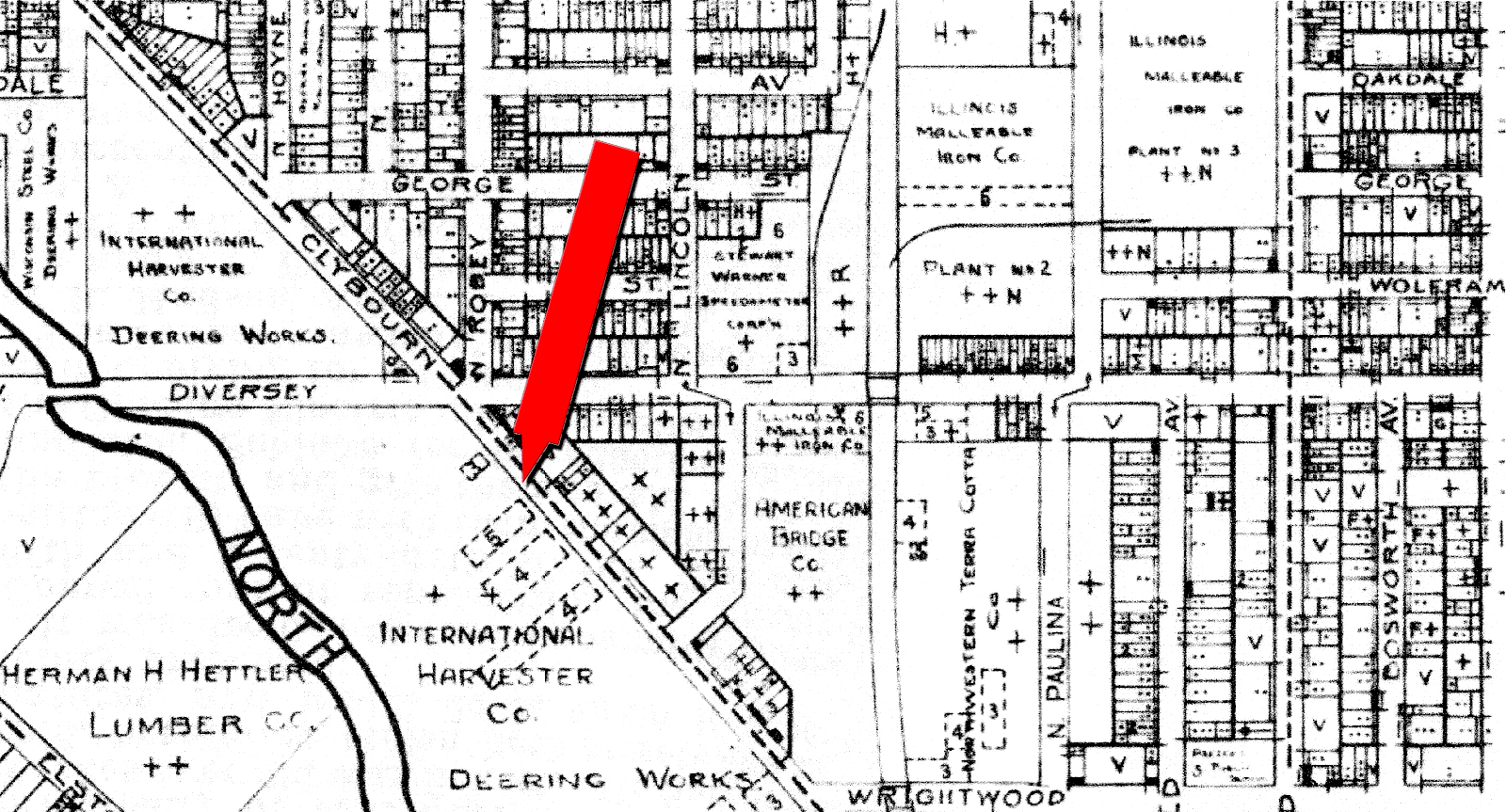 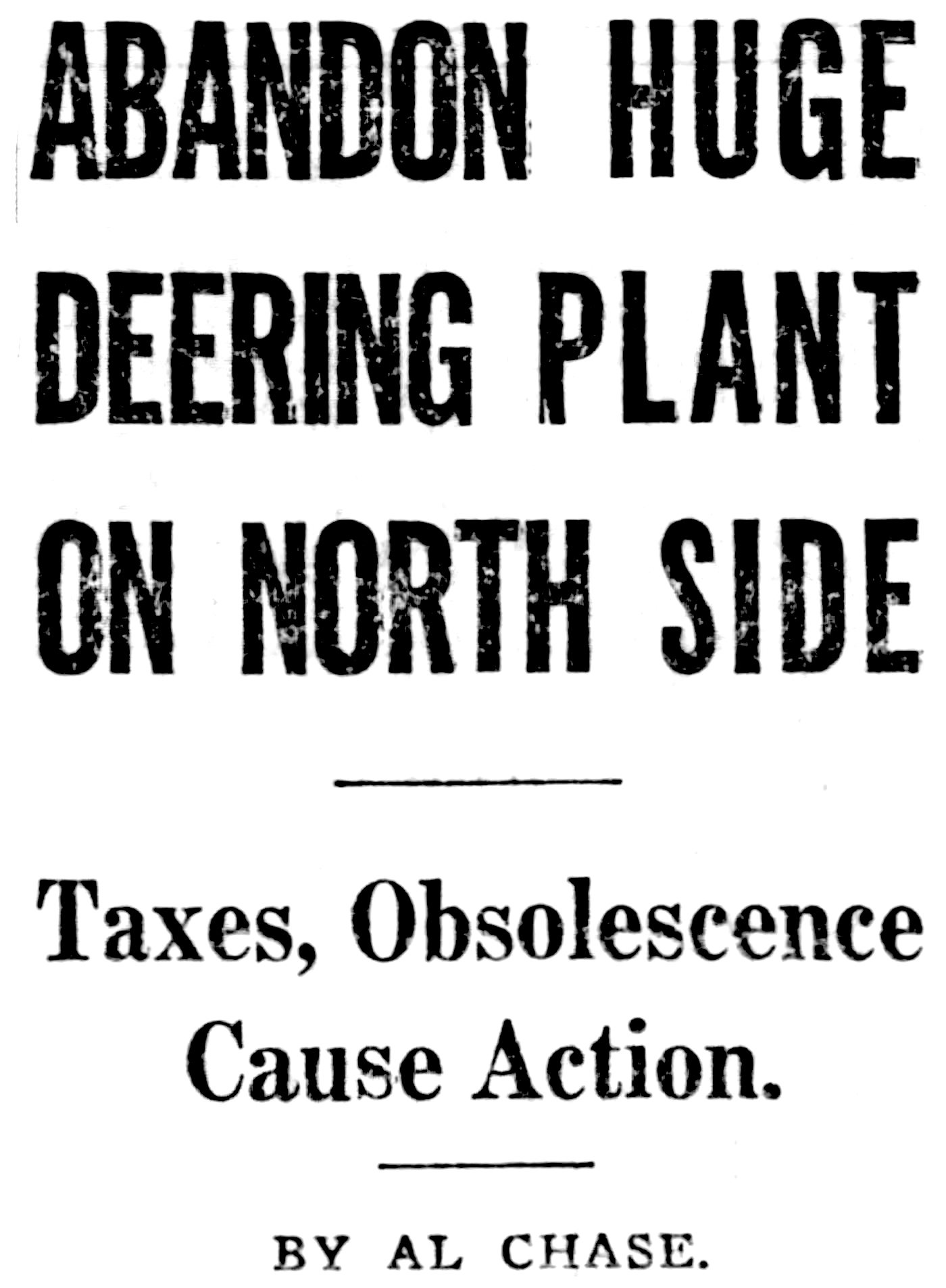 Taps are now being sounded for one of Chicago’s oldest plants and the world’s second largest farm implementation establishment—the huge Deering works of the International Harvester company, founded by William Deering in 1879, which originally covered seventy-six acres, with half a mile frontage on the north branch of the Chicago river, between Diversey and Fullerton. It was learned yesterday from an official of the harvester company that from a peak of 3,000 employes the Deering works pay roll has gradually slid to about 350.

Within a few weeks these 350 will have been retired on a pension, shifted to other units of the Harvester company or discharged. The enormous plant, at present comprising 59½ acres, will not be wrecked according to plans, but probably will be put on the market for light manufacturing, through lease or sale.

High Taxes Are Factor.
According to an official of the company, high taxes was one of the factors which led to the decision to close the Deering works. Additional reasons were labor costs and various restrictions—political, union, and otherwise. But the main factor was obsolescence. The plant, much of it built in the seventies, and with only a few units of modern construction, has been outgrown and outlived.

Farm implements of 1933 are huge tractor drawn affairs which require large, modern, heavily constructed manufacturing plants. The old structures at Deering works were made for the manufacture of small one horse reapers and binders. They can’t accommodate the necessary great cranes and heavy machinery and so the construction of that type of farm implements gradually has been moved to more modern units. The Deering plant lately has been making only small stationery engines and other moderate sized implements.

Gradually Moving Out.
“It’s merely been a case of growing away from the plant,” said an official. “The Deering works are mostly old structures which have not been modernized, as was done at the McCormick works. Therefore, for economic reasons we find it advisable to close up permanently. No definite date has been set for the closing; it’s a gradual move, which has been under way from week to week for some time.”

The McCormick works, comprising 140 acres on the southwest side, which employed about 6,000 at the peak and which now has about 2,000 men and women on the pay rolls, is the world’s largest farm implement manufacturing plant.

The International Harvester company was formed three decades ago as a combine of several leading farm implement concerns, the two largest being the Deering Harvester company, as it was then called, and the McCormick Harvesting Machine company. The first president was Cyrus Hall McCormick, son of Cyrus H. McCormick, who died in 1884. Mr. McCormick is now chairman of the board of directors. Alexander Legge is president and Harold F. McCormick is chairman of the executive committee.

At its peak production International Harvester company employed approximately 60,000 at its various plants throughout the world. 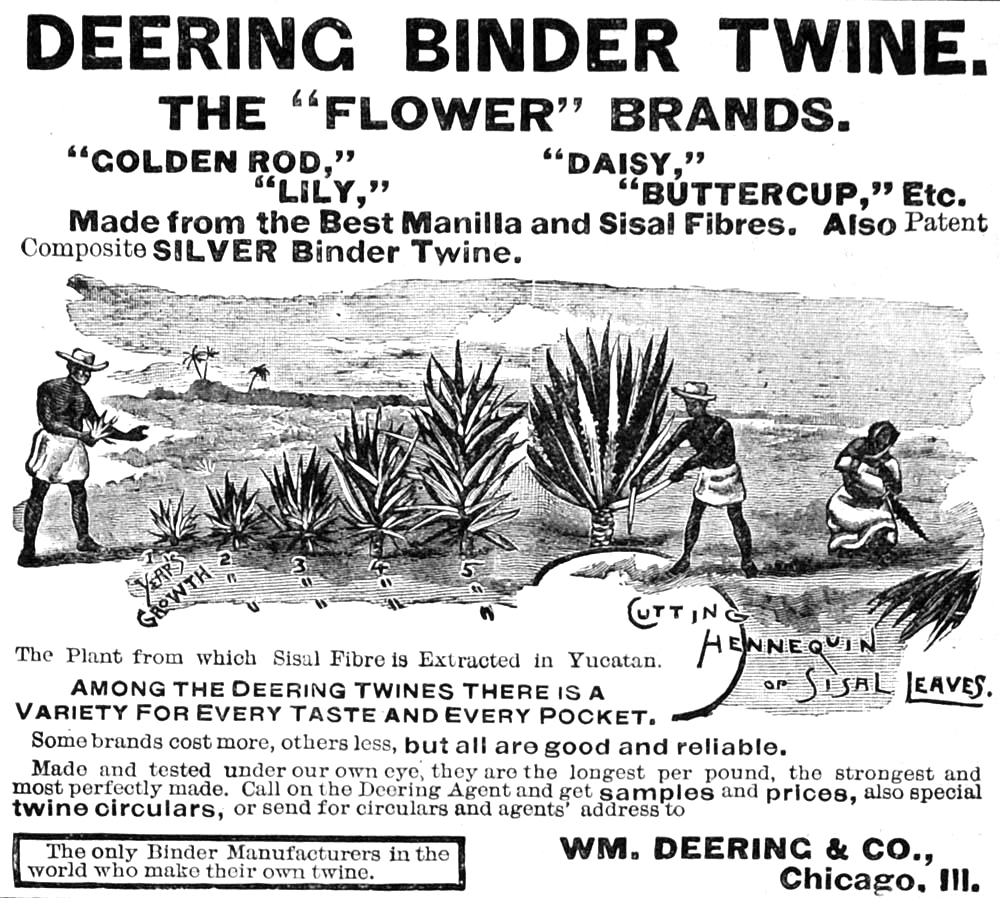 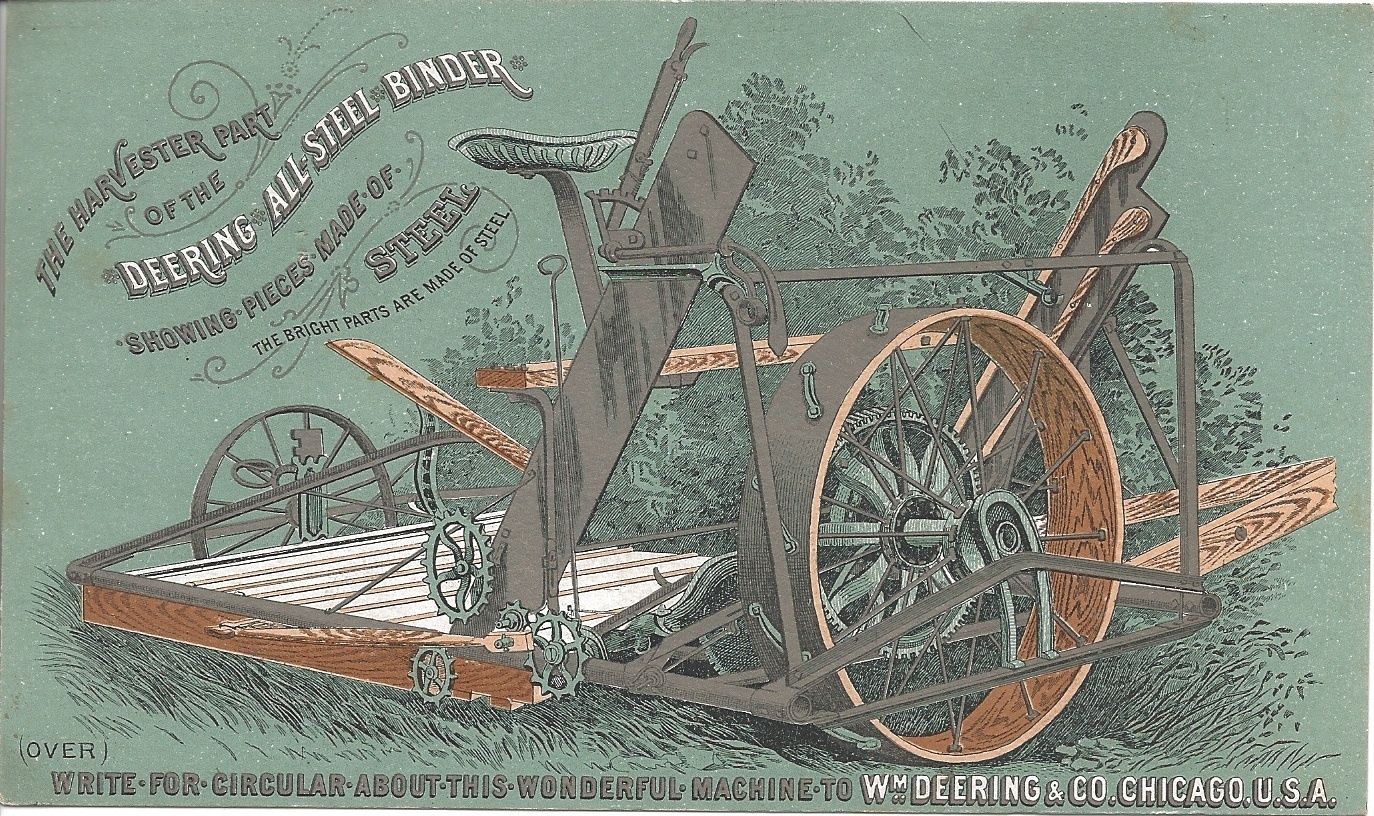 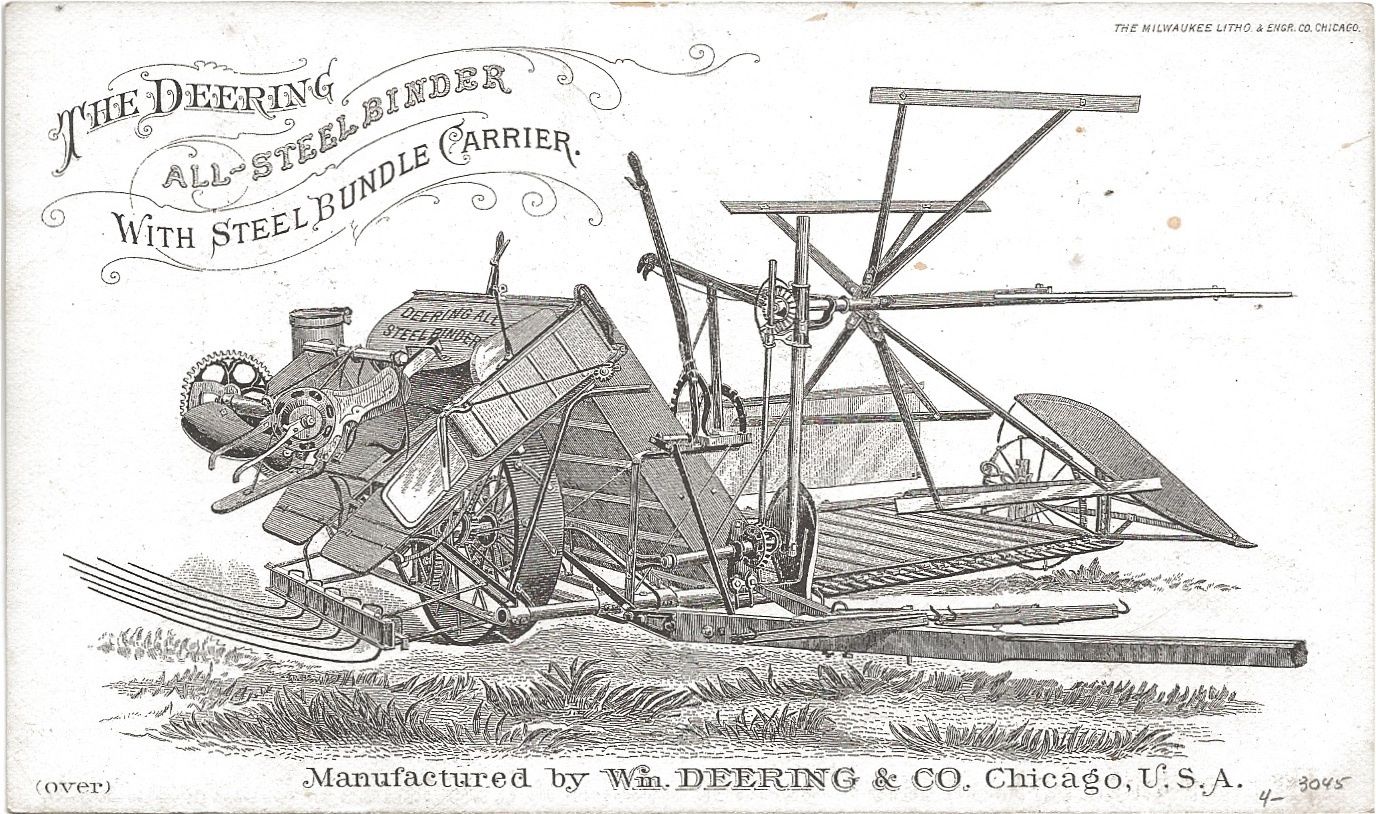