The store that Mr. L. Z. Leiter will build on his purchase at the northwest corner of Fifth avenue and Monroe street is designed to be the strongest wholesale building in Chicago. The architect, Mr. W. L. B. Jenney, has instructions to put up a structure that will support a load of 250 pounds tom one square foot simultaneously on all floors of the building. As each floor is to make that one room, it will be seen that this requirement involves

Great Solidity and Strength
of construction. Another point in which it is intended to make the store suoerior to any yet built in this city in the amount of light that will be furnished the interior. An unusual portion of the exterior of the building is of plate glass. The outside gains in beauty by the abundance of this fine material, as much as the inside in light for the display of goods. The ideas of the practical man and the artistic architect are in harmony here. There is no one respect in which our stores and public buildings are so defective as in this illumination. The greatest fault, artistically as well as practically, of our new Court-house, is the narrowness and infrequency of it s windows, and the same can be said of new business blocks. Mr, Leiter’s store, which has been already leased to Meyer, Strauss & Goodman, manufacturers of wholesale clothing, will have a frontage of 82 feet, and 10 inches, with a private alley 60 feet wide, on Monroe street, and 102 feet and 6 inches on Fifth avenue. There will be five stories beside the basement. The material will be iron, Lemont stone, and

Plenty of Plate Glass.
A little pressed bruick will be used for ornamentation. Its architecture will be of the new Gothic style. All the floors will be of narrow maple. Elevators and all the modern improvements for the convenience of tenants and the prevention of fire will be supplied. The total cost of this handsome addition to the new wholesale district will be about to $125,000. 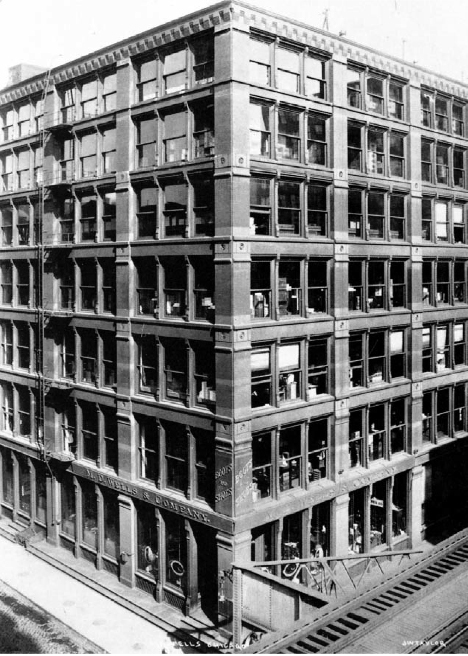 The Leiter Building I
Picture shows the first Leiter building at northwest corner of Wells and Monroe streets as it appeared in early days. Chicago landmark, now called 208 West Monroe building, is forerunner of skeleton steel construction which made modern skyscrapers possible. 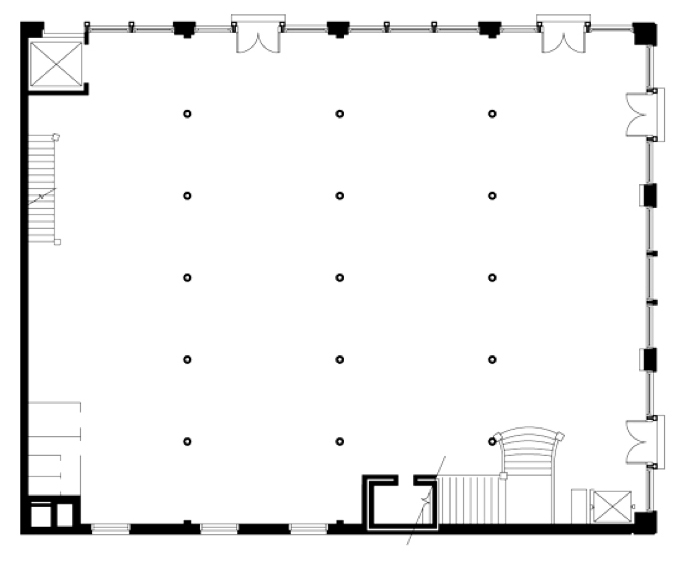 BY SUZANNE AVERY
If you have observed the simplicity and strength of the steel skeleton of a skyscaper, you may wish to know its beginnings.

You will find it at the northwest corner of Monroe and Wells streets where the 208 west Monroe building stands. Originally called the Leiter building and later the Morris building, the structure is the forerunner of skeleton steel construction which made possible the modern skyscraper.

Built in 1879
Built in 1879, the 7-story building has been cited by the Commission on Chicago Architectural Landmarks “in recognition of its contribution towards the development of skeleton construction.” It is included in the pictorial guide, “Chicago’s Famous Buildings,” edited by Arthur Siegel and recently published by the University of Chicaco Press.

A visit to the building reveals a simplicity in ornament and expanse of windows that is refreshing. Its architect, William Le Baron Jenney, stressed the admission of natural light. His approach to architecture was functional, as can be observed in this and in other of his buildings, including the Sears, Roebuck and Company building at the southeast corner of Van Buren and State streets. This also was called the Leiter building. Both buildings were owned by Levi Z. Leiter, pioneer Chicago merchant who was associated with Marshall Field and Potter Palmer. 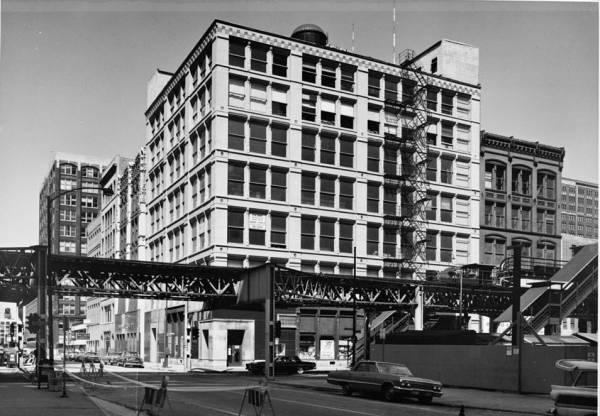 Leiter Building I
About 1960

Stands Out as Advance
While the Monroe-Wells Leiter building is not of skeleton construction, it approaches and anticipates such construction, and it stands out as an advance over other buildings of the 9-year period up to 1880, following the Chicago fire, when there was feverish activity to rebuild the city.

What was the germ of an idea in the Leiter building was fully developed in Jenney’s Home Insurance building erected in 1885 at the northeast corner of La Salle and Adams streets, which was the first building of skeleton construction. The Field building now partially occupies the site.

Commenting on this architectural milestone, D. H. Burnham, Chicago architect and planner, wrote, “This principle of carrying the entire structure on a carefully balanced and braced metal frame, protected from fire, is precisely what William Jenney worked out. No one anticipated him in it, and he deserves the entire credit belonging to the engineering feat which he was first to accomplish.”

Served in Civil War
Jenney himself was an engineer in the Civil war serving in important engineering posts with Generals Grant and Sherman. When he retired from the army with the rank of major in 1868, he came to Chicago and opened up his office as an architect. Jenney, who died in 1907, is among 25 Chicago pioneers memorialized in the new Pioneer court on Michigan avenue between The Tribune Tower and the Equitable Life Assurance Society of the United States building.

Among other buildings he designed are the Fair store, recently remodeled and now Montgomery Ward’s, and the Manhattan building, 431 S. Dearborn st., which was the first 16-story building in the world and represents a further development ot skeleton construction. 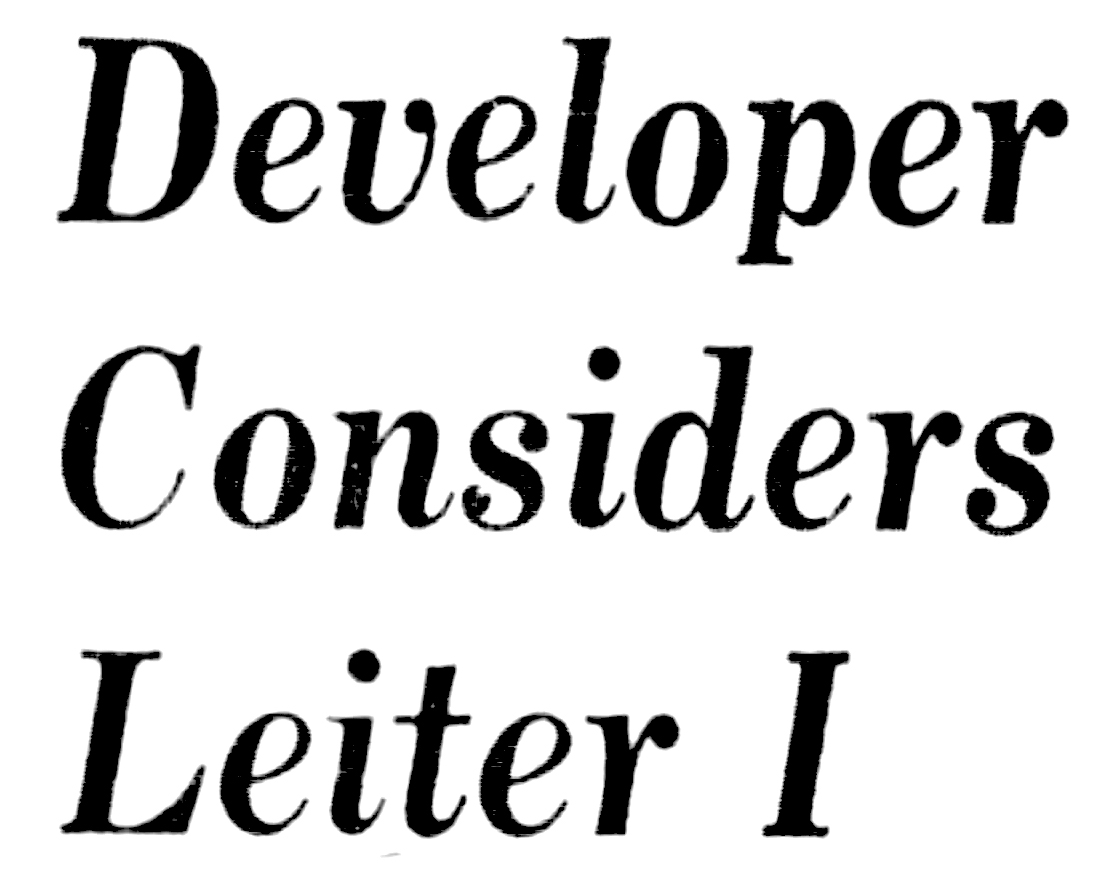 The Leiter I Building, 208 W. Monroe St., which has also been known as the Morris Building, may be coming down next year.

Fleetwood Realty, headed by Bernard Feinberg, is negotiating to buy the building from the Central National Bank. The real estate firm owns the property on bothe sides of the 92-year-old building.

Feinberg said plans for the site are now being developed. However, he said the firm owns enough land to build around the seven-story structure.

The Leiter I Building has been cited as a forerunner of steel skeletal construction. Flor and roof loads are supported on a system of cast iron columns with wooden floor joists running north and south and timber girders running east and west.

In effect, the building is a glass box at least partially enclosed by a metal skeleton. Jenney further developed the idea for the Home Insurance Building which was built at La Salle and Adams streets in 1884. The structure, calle the first building fully supported by a metal skeleton, was razed in 1932. 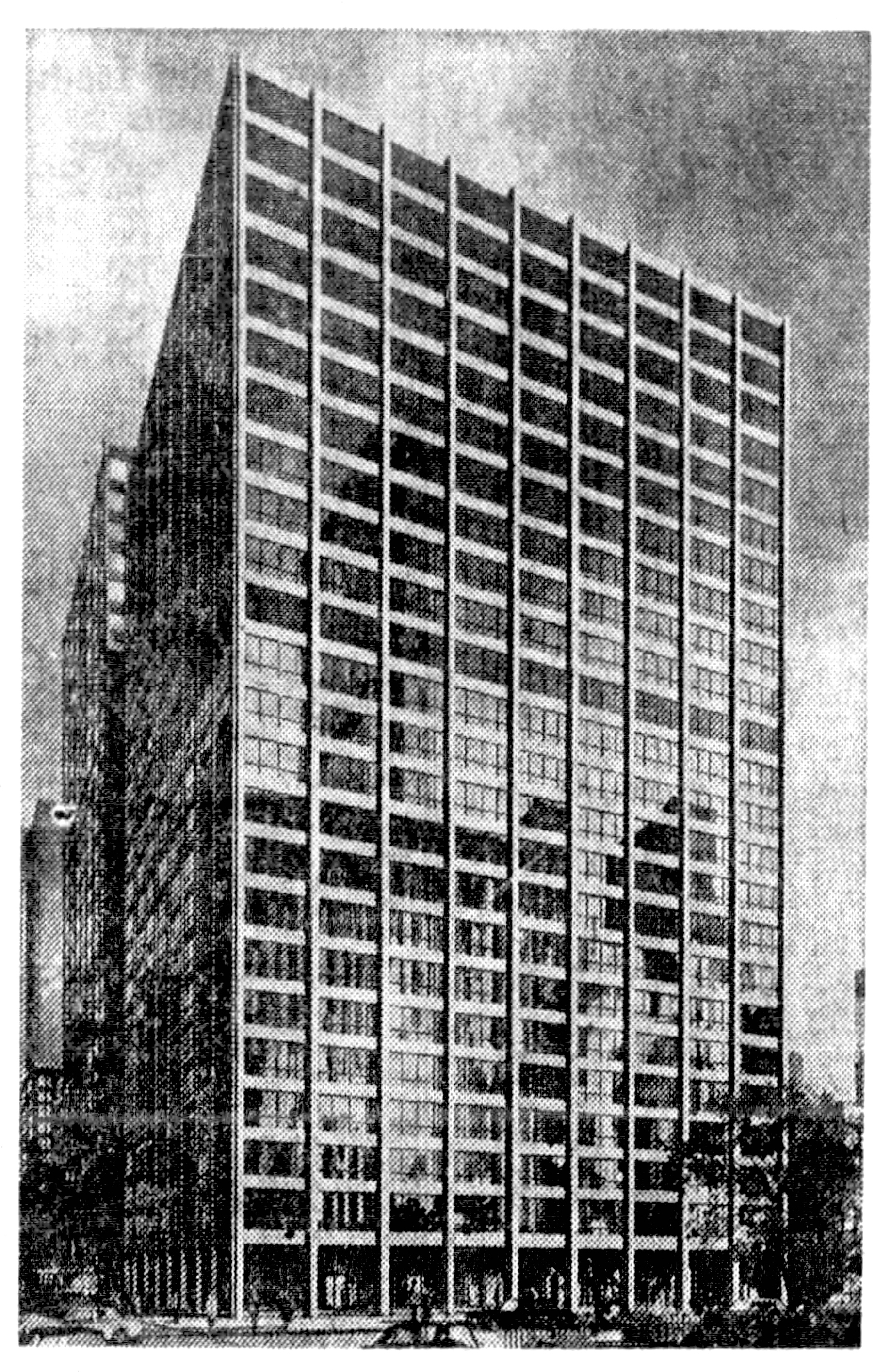 Drawing of the building planned for the northwest corner of Monroe and Wells Streets. 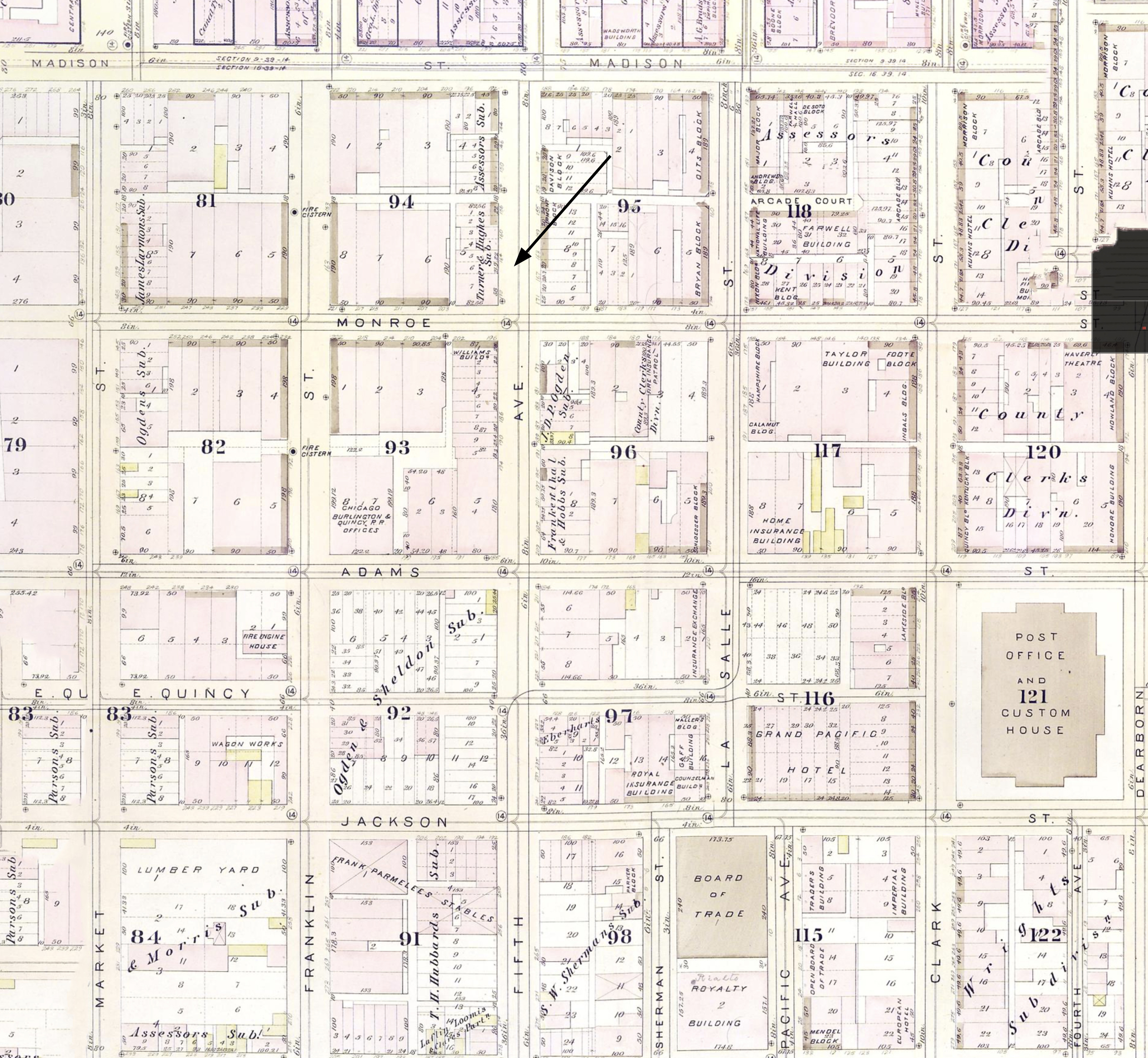 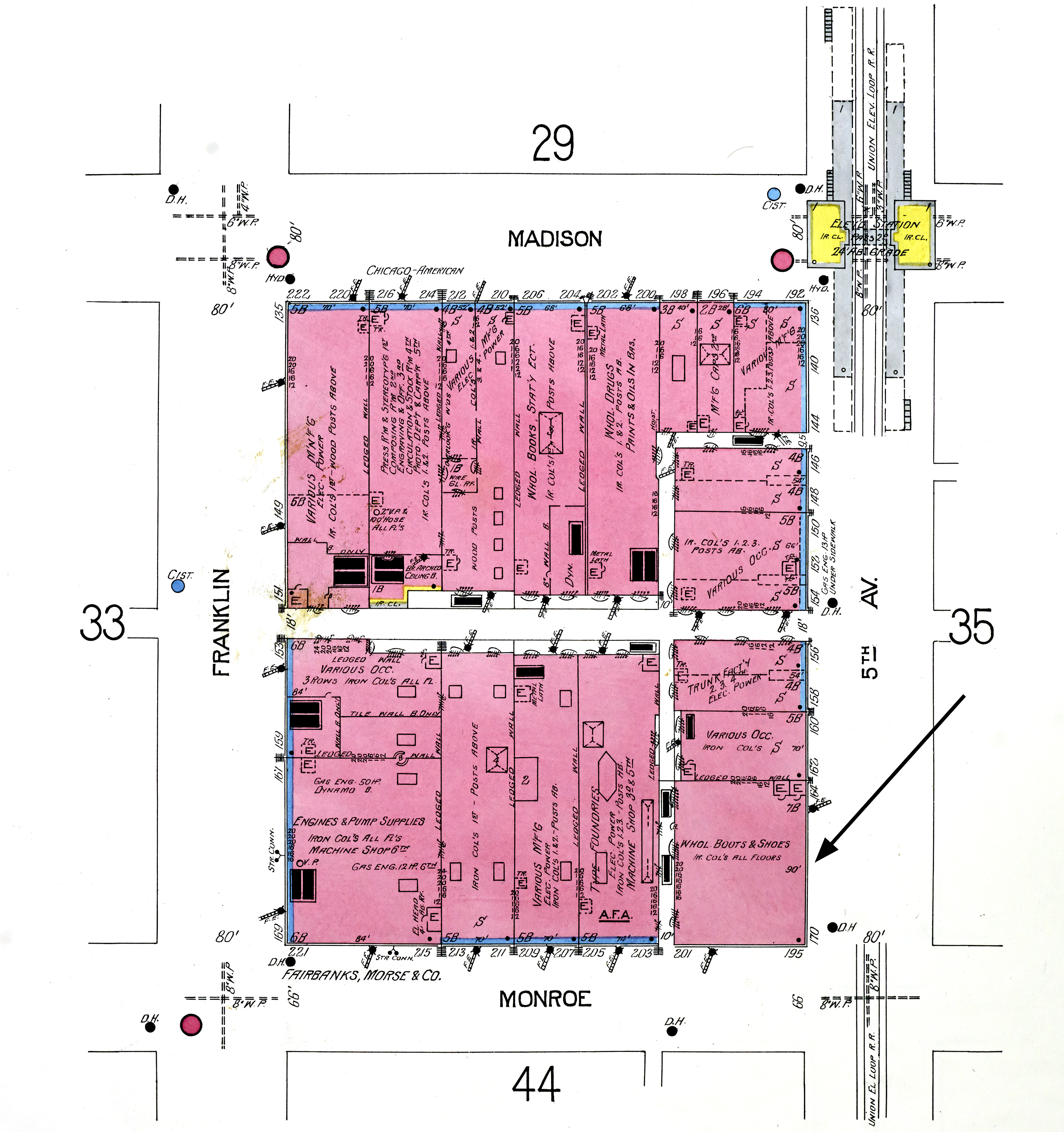