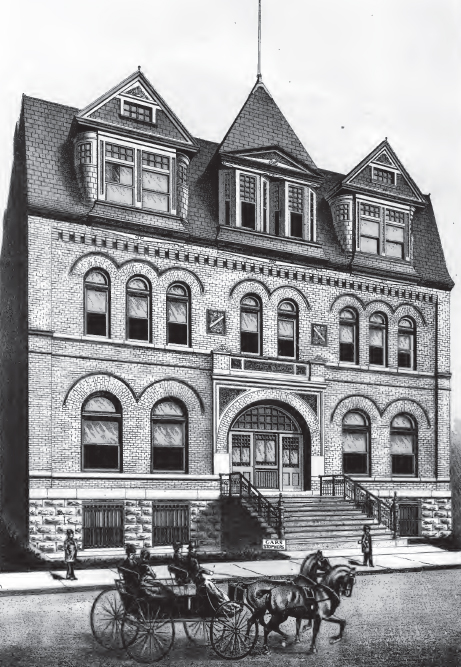 The Lakeside Club was organized in 1884, for the purpose of promoting social intercourse between its members and their families. Two houses were taken at the corner of Wabash Avenue aud Thirtieth Street, and here the Club remained until 1888, when the new Club house on Indiana Avenue (between Thirty-first and Thirty-second Streets) was opened with a grand New Year ball. The present house is an imposing structure of brick and stone, containing three stories and a basement. In the basement are the billiard rooms, cafe, the bowling alley, private supper rooms, and a dining room capable of seating four hundred guests. On the first floor are situated the ladies’ and gentlemen’s parlors, the reception room, the dressing rooms, and a fine assembly room and dancing hall, fifty -five feet wide by one hundred feet long. In the second story are the card rooms and a splendid gymnasium complete in every detail. The third floor is devoted to private apartments and the servants rooms. Entertainments of various kinds are frequently given in the Club house and in particular the general gatherings every Thursday evening have proved highly successful.

The initiation fee of the Lakeside Club is fifty dollars, and the dues are forty dollars a year.