Many Chicagoans have noticed the bronze statue on top of the old Montgomery Ward headquarters building on West Chicago Avenue. It is Ward’s time-honored symbol, The Spirit of Progress, a female figure poised on her left foot, holding a torch high in her right hand and a caduceus, an ancient symbol of commerce, in the other, while she leans forward into the wind as though about to flight.

Actually, Spirit is the third of three similar statues which have graced a number of prominent Chicago buildings. The first, a gilded weather vane of Diana, goddess of the hunt, stood on the Agriculture Building at the 1893 World’s Columbian Exposition. The second, Progress Lighting the Way for Commerce, also a gilded weather vane, was made for Montgomery Ward’s Michigan Avenue Tower Building in 1900. The third and final reincarnation was created for the Montgomery Ward Administration Building on Chicago Avenue in 1928 and christened The Spirit of Progress. 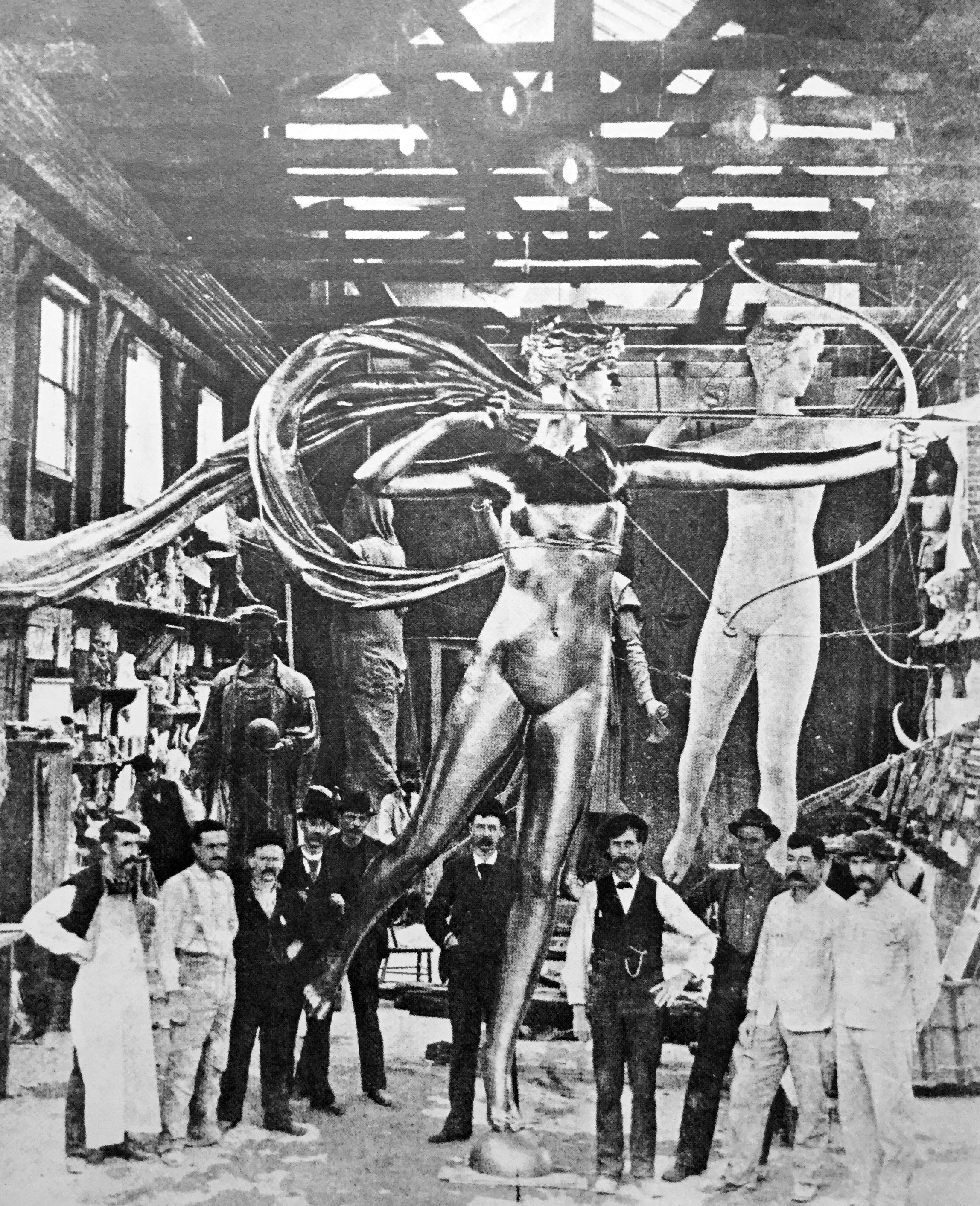 Diana I and II by Augustus Saint-Gaudens at the W. H. Mullins shop in Salem, Ohio.

Diana, Goddess of the Hunt
In 1891, Diana, Goddess of the Hunt was commissioned by New York’s Madison Square Garden’s architect, Stanford White to design a weather vane for the famous hall. He asked his friend, Augustus Saint-Gaudens, to design it. The tower at Madison Square Garden was modeled after La Giralda, the Bell Tower in Granada, Spain which also sported a weather vane called Faith.

Diana was fabricated at the W. H. Mullins shop in Salem, Ohio, she was 18 feet tall and weighed 1,800 pounds, yet she was perfectly balanced and could move gracefully with a light wind. She was made of many individually formed sections of 22-ounce sheet copper which were first machine-hammered over dies and then riveted together. Inside, the thin-skinned copper figure rested on a wrought iron skeleton, the same method that was used to construct the Statue of Liberty in 1883. Diana was covered with gold leaf.

Unfortunately, Diana did not rotate as planned because of its immense weight. Furthermore, both White and Saint-Gaudens realized that the gilded figure was somewhat awkward looking and was disproportionately large for the Madison Square Garden building. So the figure was removed about a year after its debut and a smaller, 13 foot Diana was installed. Madison Square Garden was demolished in 1925 and Diana II was placed in storage, awaiting completion of a new tower promised by New York University. But NYU could not raise the money to build.

In 1932, the Art Museum’s dynamic young director, Fiske Kimball, persuaded the New York Life Insurance Co., Diana’s owner, to give the sculpture to the Museum of Art in Philadelphia.

She was installed in 1932 at the top of the stairwell. 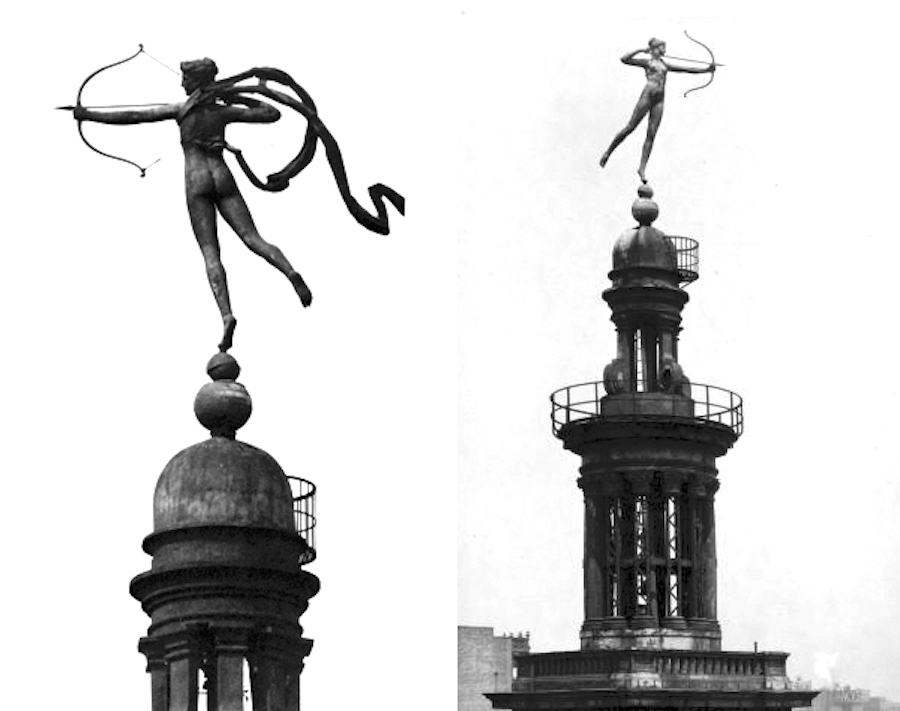 Charles McKim, the architect for the Agriculture Building at the Columbian Exposition in Chicago, who was about to begin construction, thought that Diana I would be a perfect piece to top the dome. The exposition officials agreed, and in early 1892 the statue was purchased for $2,500 and sent to Mullins for refurbishing. Once in place, Diana I soon won the admiration of many fairgoers because of her beauty and her prominent position overlooking the Court of Honor in the heart of the exposition. 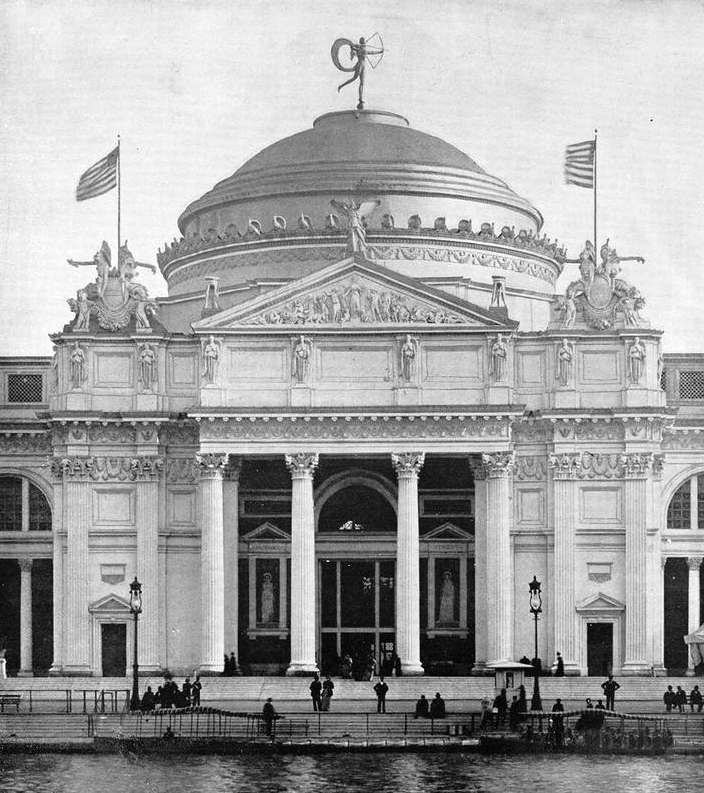 At first it seemed that Diana I was destroyed by a fire that swept the fairgrounds on January 9, 1894 as most of the structure was left in ruins. Fortunately, the Chicago Tribune reported the following day:

The statue of Diana was not damaged as she had been removed about six weeks ago to the Columbian Museum.

This was not the whole story. Executives from Montgomery Ward toured the Agriculture Building and bought the statue and had it stored in the Columbian Museum (Fine Arts Building, now the Museum of Science & Industry) until their Tower Headquarters was built in 1899. It is uncertain whether Diana was sent back to Mullins and was refurbished or if a new statue was made from a new design.

Progress Lighting the Way for Commerce
Architects for the new Ward Tower, Richard E. Schmidt and Hugh Garden envisioned a statue-weather vane on top of their new structure. Schmidt hired John Massey Rhind a Scottish sculptor to design the final statue. For some reason, however, the statue of Progress is not mentioned in articles of his work, nor does it appear in the lengthy obituary published in a London newspaper on October 22, 1956. The reason for this might well be that Rhind only designed alterations to transform Diana, therefore he would not have been the sole creator of Progress.

The reincarnated weather vane was installed on the top of Montgomery Ward’s new Michigan Avenue tower headquarters on October 21, 1900. It was dubbed Progress Lighting the Way for Commerce by the Inter-Ocean. 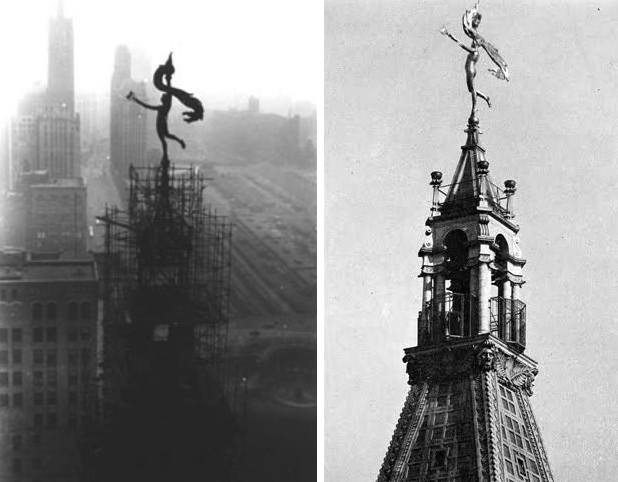 Progress Lighting the Way for Commerce on top of the Montgomery Ward Tower on Michigan Avenue. Photo on the left was taken during the dismantling in 1947.

The Chicago Tribune had acclaimed the new statue as “rivaling in beauty New York’s famous ‘Diana.'” And small wonder; with her torch held high some 390 feet above the street, the gleaming figure of Progress was visible over most of the city and far out into Lake Michigan. Lit by four electric beacons with 1,000 candlepower each, Progress actually did serve as a beacon in at least one instance. On September 18, 1918, Captain Ben Lipsner used these lights to guide his plane into Grant Park after making the first airmail flight between New York City and Chicago, in 9 hours and 13 minutes of stormy weather.

In 1908 Montgomery Ward sold the Tower Building and moved to more spacious headquarters on West Chicago Avenue. Although the Michigan Avenue building still stands, its 125-foot tower portion was removed in 1947 after being judged structurally unsafe. As for Progress, she also had to come down. On Saturday, April 26, 1947, workmen of the Speedway Wrecking Company erected a scaffold around the statue and began to dismantle her. On July 20, 1947 the Chicago Tribune, calling the figure “Diana,” reported that:

The statue was cut into about 30 pieces before it was lowered. Most of the statue is at the company’s office, but some parts have been claimed by Chicagoans. Diana’s arm with outstretched spear came off at the shoulder, the head came off in one piece, and one leg below the knee. The requests for pieces of the metal for souvenirs was amazing. Some old-timers wanted the metal to make into ash trays, and others just wanted pieces of it as souvenirs. One of Chicago’s prominent citizens has, for some reason he kept to himself, requested the bust. 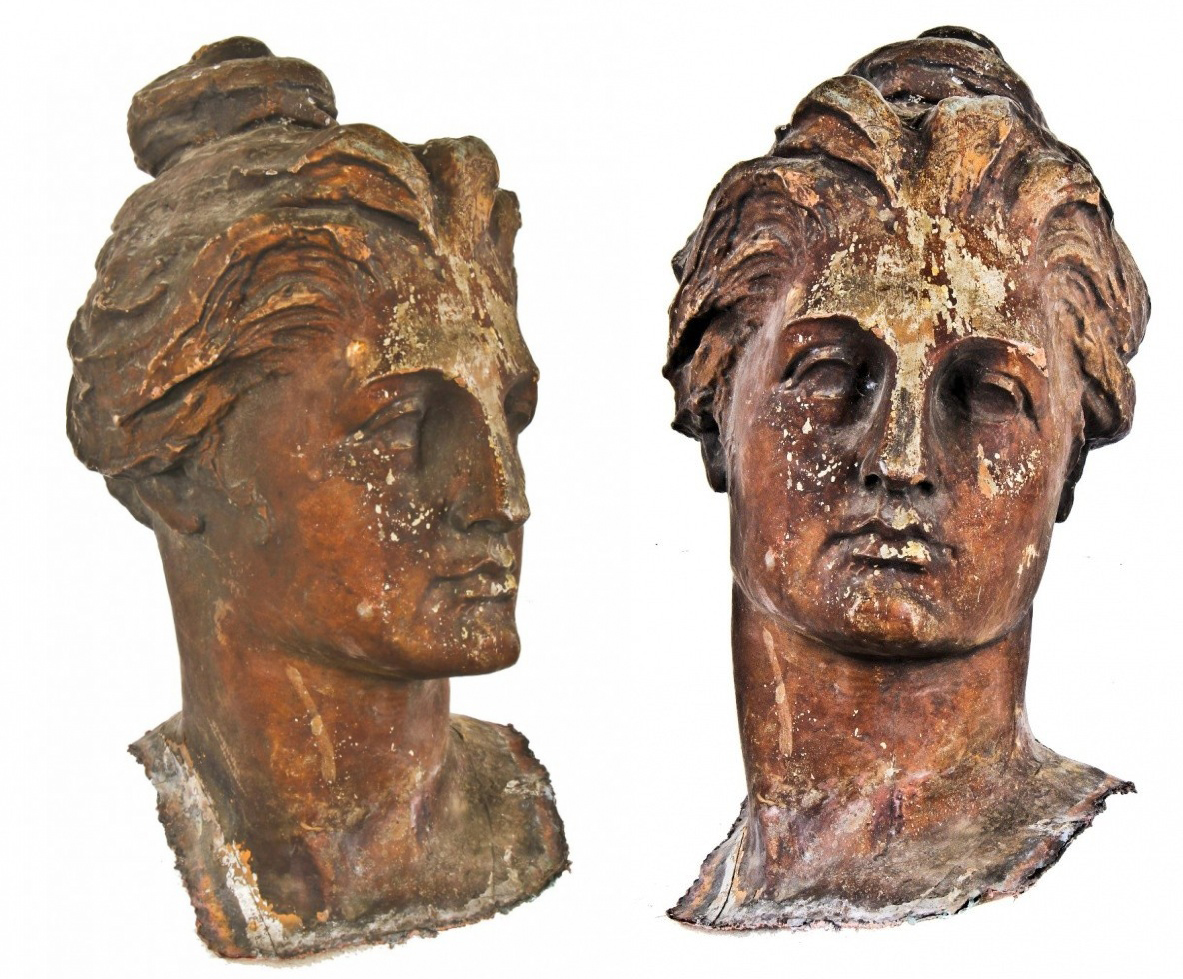 Progress’ head was auctioned off on November 4, 2014 at Leslie Hindman Auctioneers.

The Spirit of Progress
In 1922, the year of Ward’s fiftieth anniversary, Theodore F. Merseles, President of Montgomery Ward, presented the widows of A. Montgomery Ward and George R. Thorne with 15-inch bronze replicas of the Progress statue. The disposition of Mrs. Ward’s figurine is not known, but Mrs. Thorne’s statue was passed on to her great-grandson, Charles H. Thorne II.

In 1928, when construction had started on a new Administration Building on Chicago Avenue, Mersele’s successor, George B. Everitt, felt that the building shaould have a statue. He commissioned an artist to design one, and in September, 1929 The Spirit of Progress was placed atop the white stuccoed Art Deco tower.

Once completed, Spirit became the new corporate symbol, and the company commissioned copies to place on other Montgomery Ward buildings across the country. But President Everitt’s successor, Sewell Avery, was not quite taken to her. After he became president in 1952 Avery sought to have her removed. However, he dropped the plan when he found that it would cost $6,000 to dismantle her. 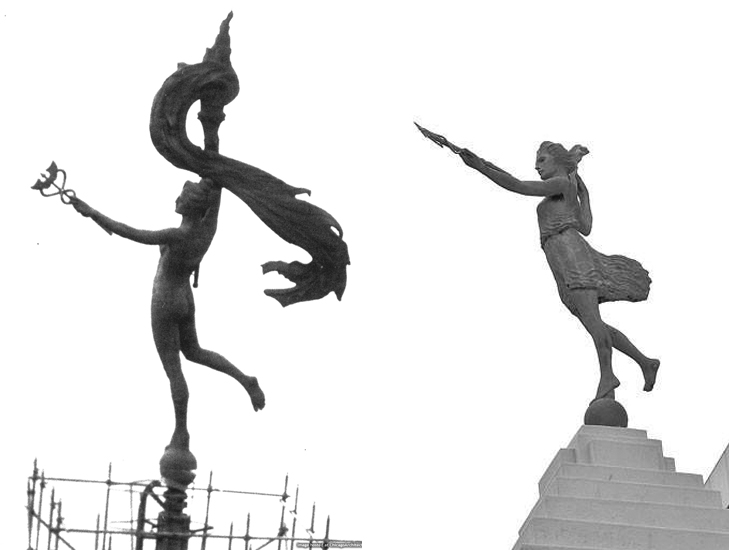 For years the identity of the artist was unknow, making the story of Spirit’s origin as much as a mystery as that of Progress. However, it is probable that Spirit was the work of sculpture-architect Joseph Conradi. In a letter to his grand-daughter, Grace Conradi Anderson of Addison, Illinois, Conradi’s second wife Anna wrote:

Your grandfather Conradi was architect and sculptor at St. Alphonsus Church at Lincoln, Southport and Wellington Avenues, Chicago. Also, the tallest statuary, “Progress” is his work (I think it’s on Montgomery Ward building) can be seen from Lake Forest and afar.

Although there is no other documentary evidence to corroborate Mrs. Conradi’s conviction, the sculptor’s oldest son Leo also attributed the statue to his father. Just before his death in 1979 Leo told Mrs. Anderson that he remembered the day his father’s statue of The Spirit of Progress was placed on the Ward’s building. 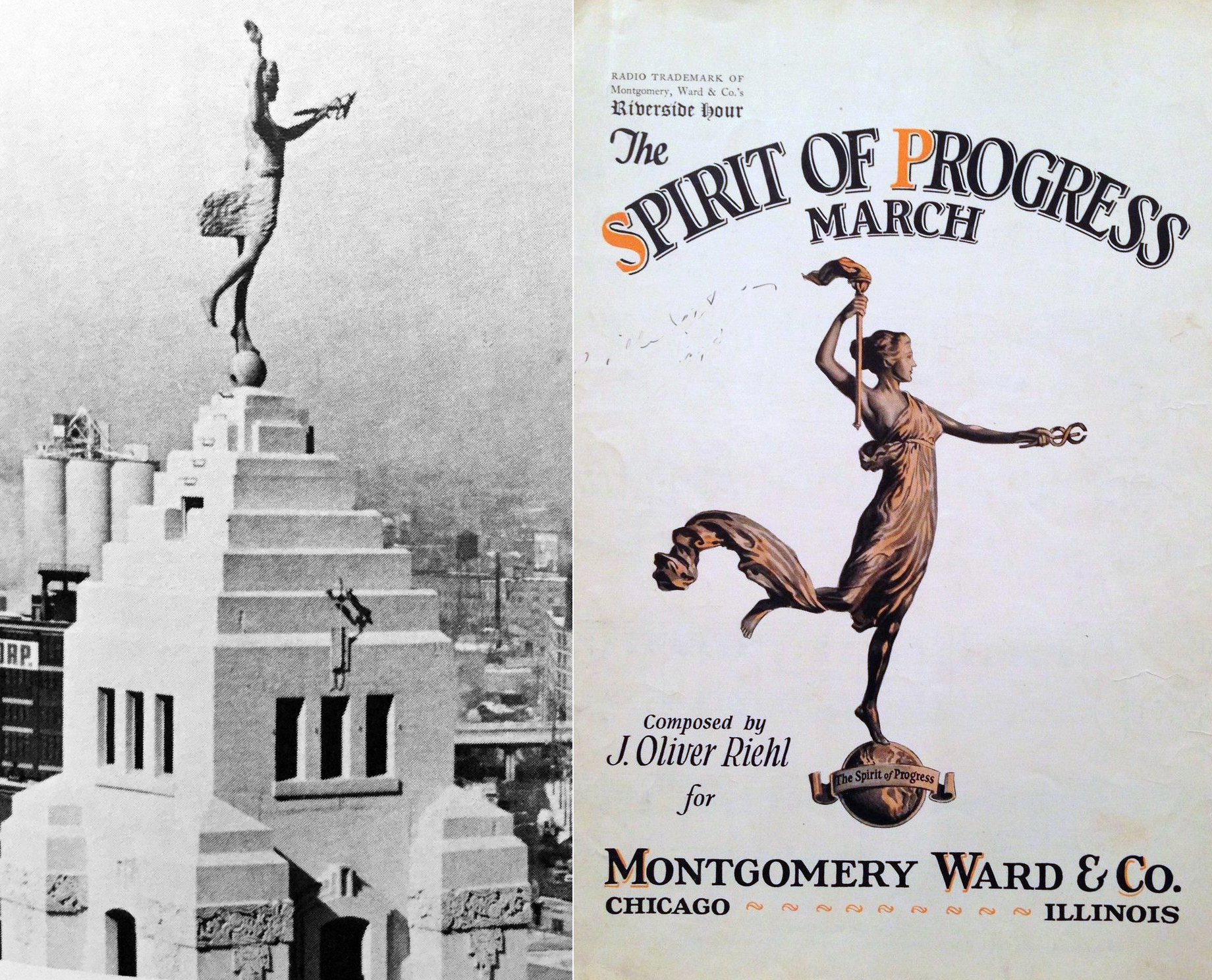 Later reports include captions for photographs taken in 1929 by the foundry, American Bronze Company, and they list the artist as George Mulligan, son of sculptor Charles James Mulligan (1866–1916). The elder Mulligan studied at the Chicago Art Institute with Lorado Taft and his local works include Lincoln, The Railsplitter, The Independence Square Fountain and the William McKinley Monument. 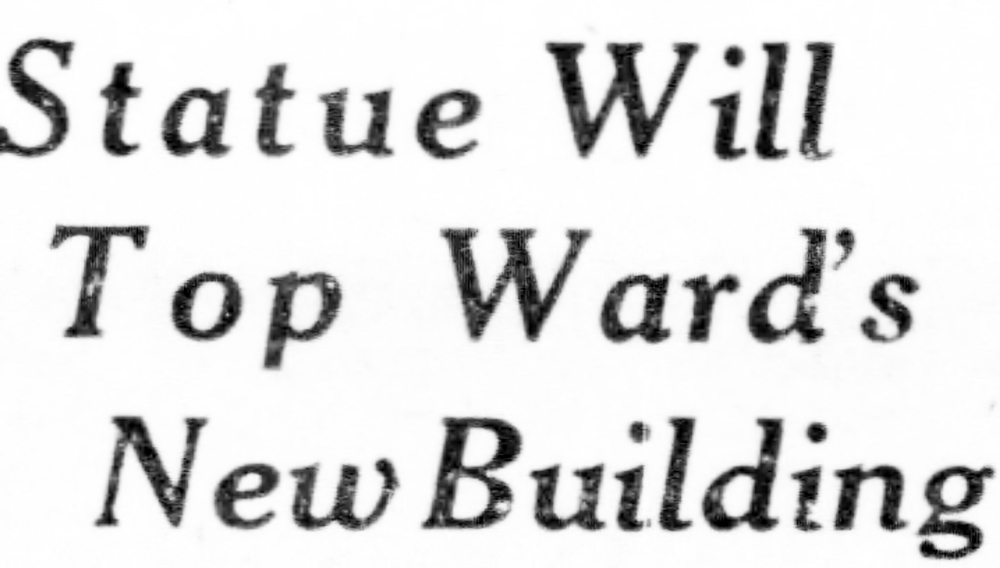 Foundations are now being installed for the eight administrative building being erected by the Larrabee Building corporation for Montgomery Ward & Co. at the southwest corner of Chicago avenue and street. This structure will occupy a site 160 x 320 feet which was purchased by the late A. Montgomery Ward at the time he bought the land for Ward’s present huge building, just across the street.

Designed by the construction department of the mail order firm, under the direction of W. H. McCaully, chief engineer, the new building will be of modernistic architecture. At one corner there will be a tower surmounted by a figure reminiscent of the statue atop the Tower building at Michigan and Madison-Ward’s home.

The new building will contain the executive, administrative and general offices and the clerical departments. The first floor will be for retail store purposes, replacing the establishment in the building the street. Clerical departments wil take up the second and third floors.

On the fourth floor there will be a large cafeteria for employees and for customers of the store. Executive departments of the chain store and retail store divisions will be found on the fifth story. The merchandise buying group will take up the sixth floor, while the catalog and general operating departments will be on the seventh. And, finally. the executives are to be located on the top floor where it’s presumed they’ll have walnut trimmed rooms, fireplaces, and the other perquisites of the “big shots.”

The building is to be of reinforced concrete construction. Financing is being accomplished by a $2.000,000 bond issue recently announced by Lawrence Stern & Co. and the First Trust and Savings bank. Winston & Co. were the real estate brokers in arranging the enterprise. The Wells Brothers Construction company has the contract.