< --Previous  Up  Next–> From Picturesque World’s Fair, An Elaborate Collection of Colored Views
PUBLISHED WITH THE ENDORSEMENT AND APPROVAL OF George R. Davis
PUBLISHED BY W. B. Conkey Company,
OFFICIAL PUBLISHERS OF THE WORLD’S COLUMBIAN EXPOSITION CATALOGUE, ETC.
CHICAGO.

THE VIKING SHIP. It was well that with the Columbian celebration honor should be paid to Leif Ericsson, undoubtedly the first European to land upon the shores of America, though due advantage was not taken of his great discovery, and it was well, too, that the Viking Ship seen at the Fair should be a reproduction of one buried with its commander at about the time Leif Ericsson made his voyage. That was not far from the year 1000. The “Viking,” as the vessel was named, was seventy-six feet in length, was open, with the exception of a small deck fore and aft, and was very simply rigged with one mast, which could be taken down, and with a single sail. Evidently the Norsemen depended much on their long oars The pn»w was adorned with a dragon’s head, and the stern with a dragon’s tail, both being finished in gilt. Outside the slender bulwarks were hung the embellished shields of the crew, and there were benches and apertures for sixteen rowers on a side. The rudder, after the ancient custom, was placed on the right side, close to the stern. A canopy which could be erected at will made a shelter over the deck. The fund for the reproduction of the “Viking’ was raised in Norway by popular subscription and, under the command of Captain Mag- mis Andersen and a picket! Norwegian crew, the vessel made the trip across the Atlantic Ocean and through the great lakes with ease, doing even more than the Norsemen did so long ago in a similar craft. A splendid exhibit was the “Viking,” and all honors were paid it and its country by America. 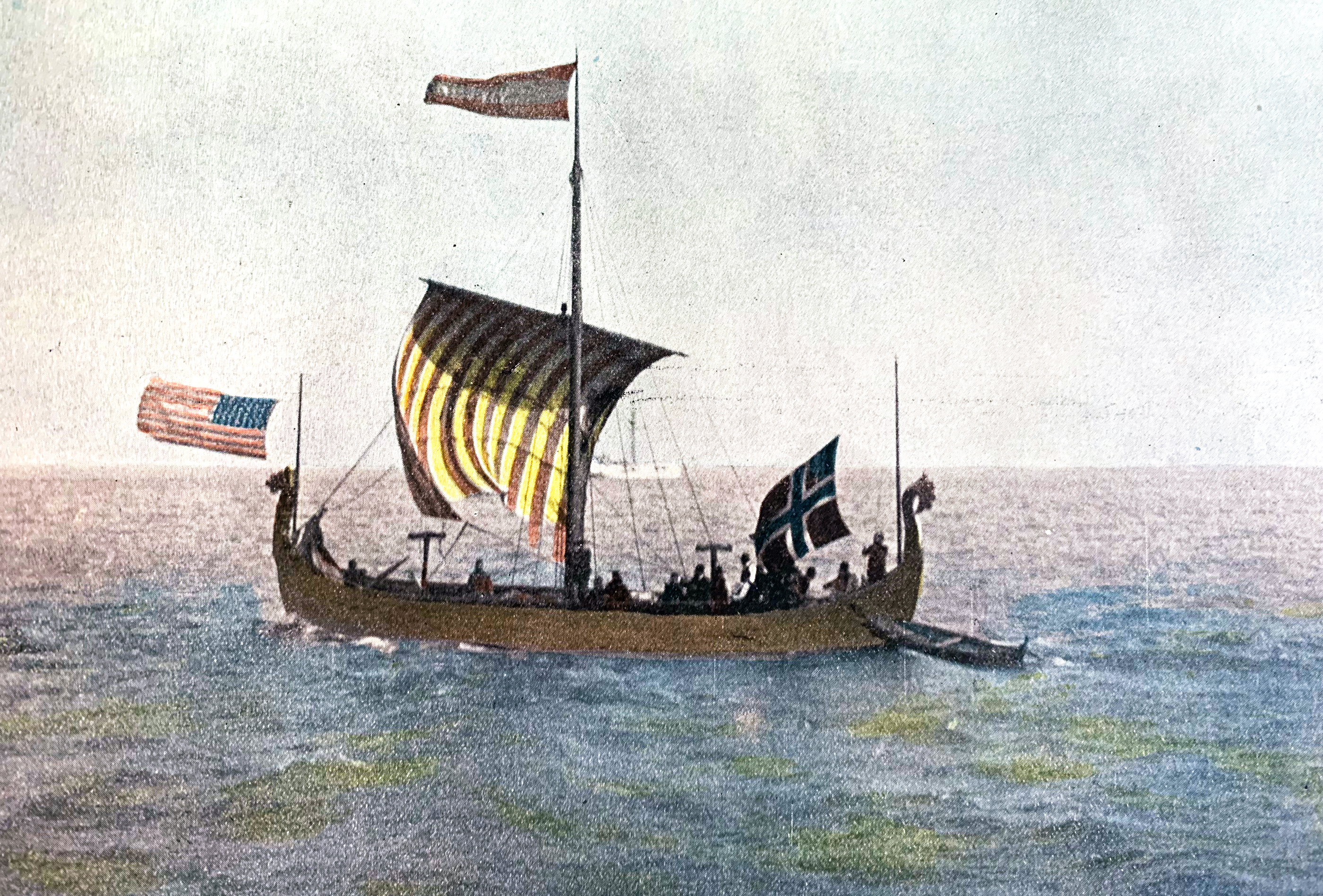 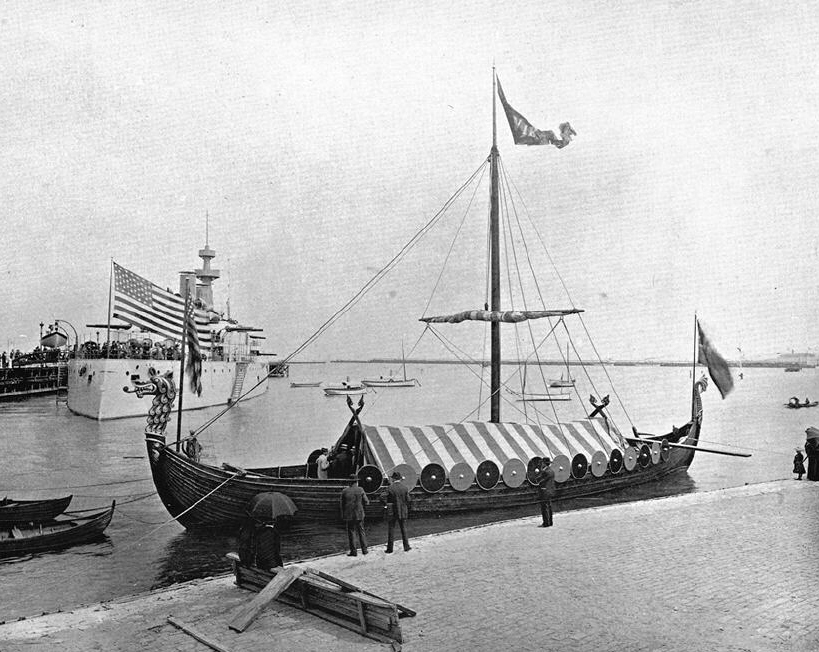 The Viking Ship Moored Near The “Illinois”

In the marine division of the Transportation department the most interesting exhibits are the Columbian caravels and the Viking ship of the Norsemen, reproduced as nearly as possible in facsimile, just as they sailed in the seas many centuries ago. 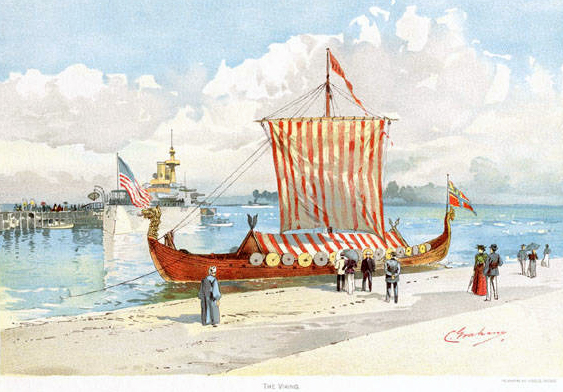 Of the Viking ship, resembling the vessel in which, as is claimed, a Norwegian navigator discovered the North American continent nearly a thousand years ago, the following is briefly the story. During the winter of 1879 a sailor, living at the port of Sandefjord, employed his spare time in exploring a mound on the outskirts of the town, where, as tradition related, a Viking had been buried with all his earthly belongings. In this ancient Saga legend the towns-folk had little faith; but the sailor persisted, and after digging a square hole not many feet in depth, his spade struck a solid oak plank, which proved to be the side of a ship. Thereupon the royal university of Christiania sent men to inspect the relic, and in early summer, when the frozen earth could be cleared away, it was found to be the genuine craft of “a Viking old,” whose skeleton, encased in armor, still kept guard over his treasure, its wood-work, oars, and equipments all well preserved after the lapse of many ages.

The vessel was repaired and removed to the university, where now is its home, and as the approaching Columbian Exposition began to be the talk of the world, it was determined to send there her counterpart, manned by Norwegian sailors and unattended by any other craft, in order to prove the feasibility of Leif Erikson alleged expedition, more than nine centuries ago, from Norway to the New England coast. Thus from Sandefjord the vessel, built by public subscription in the spring of 1893, set sail for New York, and in the middle of July anchored off Jackson park. To call her a ship is somewhat of a misnomer, for she has no deck, and carries but little sail. Rather is she a large open boat of some 27 tons, more than 70 feet long and 16 in the beam, with 32 oars, each 17 feet in length, her bow and stern far above her body and her clinker-built planks overlapping like the weather-boarding of a house. Her lines are remarkably beautiful, resembling those of a yacht, the convex curvature of the keel increasing her strength and steadiness of motion. Such is the vessel in which a crew of Norwegian sailors crossed the Atlantic and the lakes, sleeping on reindeer skins and cooking their food as best they could in the bow of their unsheltered craft.