Andreas’ History of Chicago Volume I

Chicago did, however, have a really grand hotel as early as 1835; this was tne Lake House, located on the corners of Kinzie, Rush and Michigan streets, fronting on the latter. This hotel, which was built of brick, was three stories and a basement in height, was elegantly furnished throughout, and cost its owners nearly $100,000. The men whose enterprise led them into building a house which for those days was far in advance of the needs of the town, were Gurdon S. Hubbard, General David S. Hunter, John H. Kinzie, Dr. W. B. Egan and Major James B. Campbell. The hotel was completed and thrown open to the public in the autumn of 1836, Jacob Russel, of Middleton, Conn., assuming control of it’s management. In 1839 Mr. Russel left the Lake House to take charge of the City Hotel the predecessor of the Sherman House which had just been opened to the public, and (Jeorge E. Shelley, of Baltimore, became the proprietor of the Lake House. Mr. Shelley introduced a French cook, printed bills of fare, and various other innovations in the management of the house. The following year Daniel S. Griswold succeeded Mr. Shelley in the management of the Lake and some years after this it was sold under a foreclosure of mortgage, by Hon. Isaac N Arnold, attorney for the mortgagees, to Hon. Thomas Dyer, for $10,000. William Rickards was the next manager in 1844, and remained in charge several years, finally, however, leaving there to take control of the Sherman House. In 1854 the house was remodeled, inside, an additional story, with a handsome cupola added, and was opened as a first-class hotel by James E. Hays and M. M. Smalley. This firm remained the proprietors until in 1856, when Mr. Boardman took it and ran it until 1858. After repeated experiments to make it a financial success, all of which proved failures, the house was converted into residence flats and was so used until destroyed in the great fire of 1871

The Lake House hotel on the north side of the river, near the bank opposite the fort, at Rush, Kinzie, and Michigan streets, facing the latter; ground was broken in 1835, and opened in the fall of 1836 across the Chicago River from Ft. Dearborn near where the Wrigley Building stands today. It served as a center for social and political activity.The ferry at the Lake House, the safest and the pleasantest on the river, was free.

It was three stories high and built of brick, the hotel was elegantly furnished and construction cost was $90,000; was owned by the Lake House Association, whose members were G.S. Hubbard, Gen. D.S. Hunter, John H. Kinzie, Dr. W.B. Egan, and Maj. James B. Campbell. It was managed by Jacob Russell from late 1836 into 1837.

By 1850 Lake House no longer functioned as a hotel but had become a charitable hospital for the poor with initially 12 beds, wherein December of that year members of the Sisters of Mercy, a Catholic order from Ireland, took over the nursing care. Among the attending physicians was Dr. Daniel Brainard, giving free care for the privilege of conducting teaching sessions with his Rush Medical School students on the premises. The hospital opened with beds for twelve invalids, on November 25, 1850. where patients could receive treatment gratis, upon payment of from two to three dollars acweek for board and nursing.Thus Lake House became Chicago`s original Mercy Hospital site and retained this purpose until October 1953, when it moved to a new brick building on Wabash Avenue and Van Buren Street. 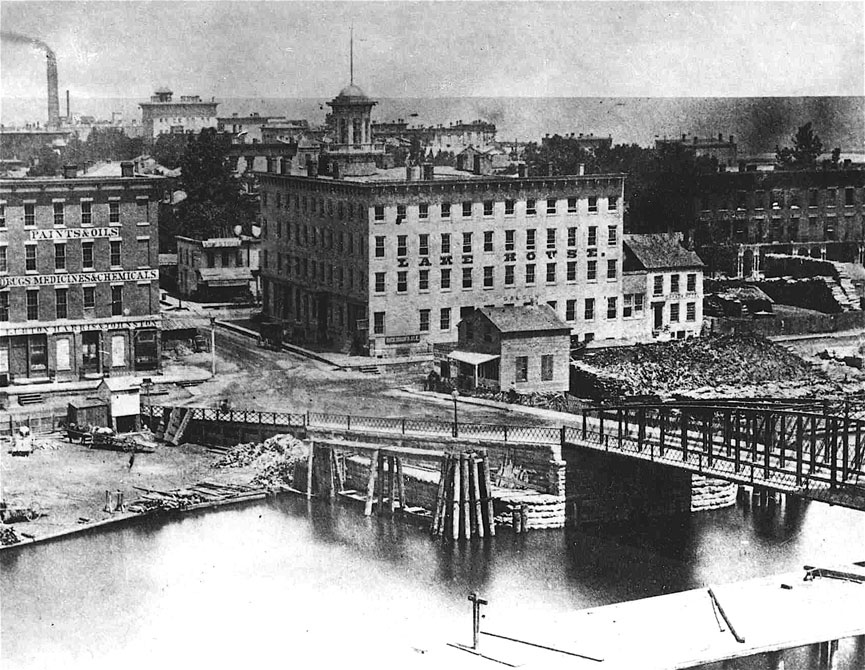 Incident at the Lake House Ferry
A shocking calamity occurred September 19, 1856. About seven o’clock in the morning, the boat at the Lake House ferry capsized while crossing from the North to the South Side. It was crowded with passengers, all men, and most of them laborers going to their daily work. Many succeeded in swimming ashore, others were picked up by boats. It was supposed that a very large number were drowned, but as only ten bodies were subsequently found, it was concluded that the fatality was not so great as was at first believed. The boat was not the regular ferry boat in use at that point ; that had been taken away for repairs, and the substitute was the old flat scow ferry that had been used at Wells Street. It really was not fit for use. Those who crowded upon the boat in such numbers did not know its unseaworthy character. They were so impatient to cross that they took the boat out of the charge of the ferry-man and left him on the shore. When the boat was a few feet from the shore, the ferry-man slacked the line, as a vessel was approaching. The coroner’s verdict declared this act imprudent, but it could not of itself have caused the accident. The boat immediately careened with its overweight, and all the passengers went down.