NIXON’S BLOCK.
W. K. Nixon’s new and unoccupied building, on the corner of Monroe and LaSalle streets, proves to have been but slightly damaged. It will be completed for occupancy in about thirty days, and the owner, with a generosity worthy of all commendations, has actually reduced the rental 10 per cent below the price named in his leases.

On our title page this month, we give an illustration of a building that has attracted much attention since the great fire, and is destined to be conspicuous as our city grows old and present events events pass into history. It stands on the north-east corner of LaSalle and Monroe streets, and on both faces of its corner-pier is cut the following inscription: 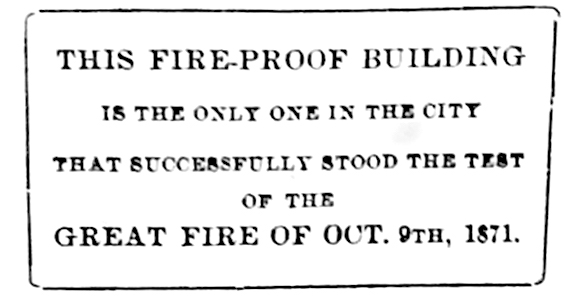 It was the last building erected previous to the fire, by one of our best known citizens—Mr. W. K. Nixon—who, coming to our city from Cincinnati about nine years ago, has since that time built and owned several of the largest and most central business edifices that adorned Chicago in the ante-fire epoch. Its architect was Mr. Otto H. Matz, and the plan, including its many well-proved fire-proof peculiarities, was the result of much thought and careful study on the part of both architect and owner.

As there has been a somewhat general impression that it escaped the general destruction in consequence of its not being fully completed at the time of the fire, and as all facts bearing upon the important subject of security against fire are of the greatest interest to the building public, it should be understood that, though not quite finished, the building contained, when the fire swept through it, very much more and other combustible material than would have been in it had it been fully completed. Its marble floors and wainscottings were not set, and the sash and doors were not hung, but in some rooms dry pine lumber was heaped in piles that reached the ceilings, and every particle of this was consumed without the walls, ceilings, or roof of the building showing a crack or any other sign of the fire, excepting the brown tint its severe baking spread over every part of it. The secret of fire-proofing unquestionably is that the combustible parts of a building shall not be in too great proportion to its incombustible parts. 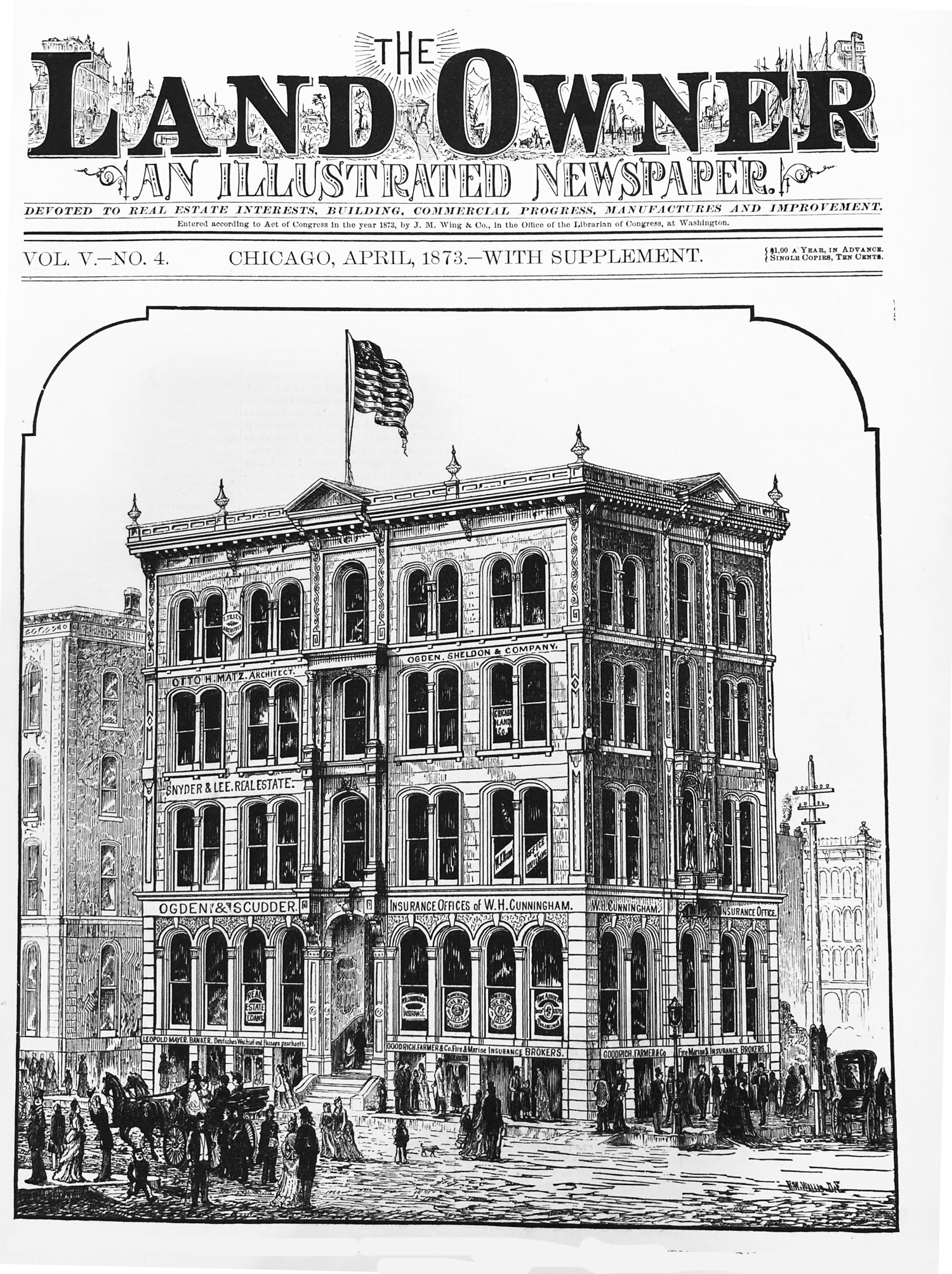 A Notable Building—Nixon’s Fire-proof Block, the Only Structure in the Chicago Burnt District Not Damaged by the Flames. 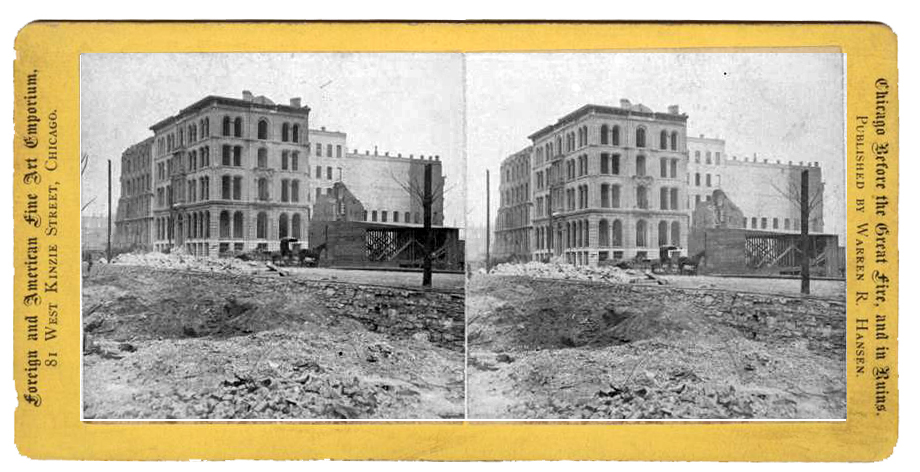 Nixon’s Block after the Fire. 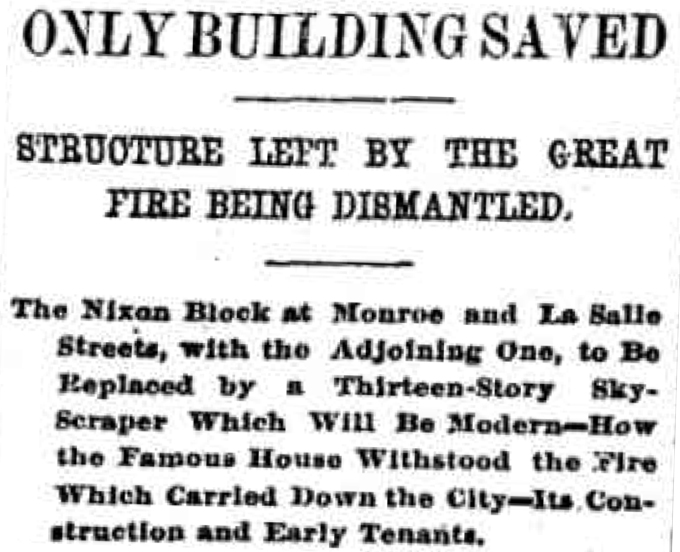 In spite of the fact that it was the only downtown structure which passed through the great fire of 1871 unscathed the Nixon Building on the northeast corner of Monroe and La Salle streets is now sharing the fate of so many of its neighbors in being torn down to accommodate a larger building. Scaffolding was erected around the building Monday preparatory to the work of demolition. The Nixon Building, its neighbor the Kent Building on Monroe streetand the structure east of the Kent will go down to make room for a mammoth thirteen-story building which a syndicate of Pittsburg and Chicago capitalists will erect.

The new building will cost $600,000, but it will fail to possess the interest claimed by the Nixon Building, on whose stone appears the following inscription:

When the smoke of the big fire had partially risen and, the ruins had cooled sufficiently for investigation, it was found that the Nixon Building stood an almost solitary monument to the city’s former prosperity. All around were the charred and crumbling ruins of the city’s pride. The Nixon Building alone stood ready to be put into use, with its walls and apartments practically intact. In ten days after the fire was over the building was ready for occupancy.

Otto H. Matz, the architect of the building, and W. K. Nixon, its owner, were two of the of the proudest men in Chicago during the closing days of that fated October. 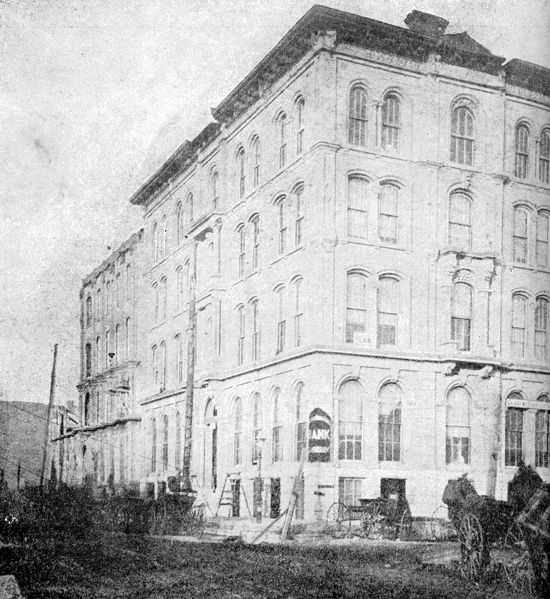 As a Fireproof Structure
It cannot be said that they had “builded better than they knew,” for both Mr. Nixon and Mr. Matz had intended the building to be fireproof. Otto Matz had planned the old Illinois Central depot, a seven-days’ wonder of those times, and other noteworthy buildings. His aim was to make the Nixon Building strictly impervious to the flames and Mr. Nixon lost considerable sleep in seeing that the contractors carried out the architect’s ideas. The intention was to make the building as indestructible as the ground. Mr. Nixon made the boast that it was to stand till the crack of doom. He went to the Board of Public Works and asked it to establish a street grade that would never be altered, because his new building was not to be subject to change. If the promoters had been told that their indestructible building would be superseded by a thirteen-story building within twenty-two years they would have laughed the prophet down.

The structure was not quite finished when the big fire broke out. The floors were laid and the walls were plastered. Inside large quantities of lumber for finishing purposes and scaffolding were laid in piles that reached nearly to the ceiling. The building was in the heart of the burned district and considering the fact that it was so full of combustible material the test was one of the severest to which a structure could be subjected. 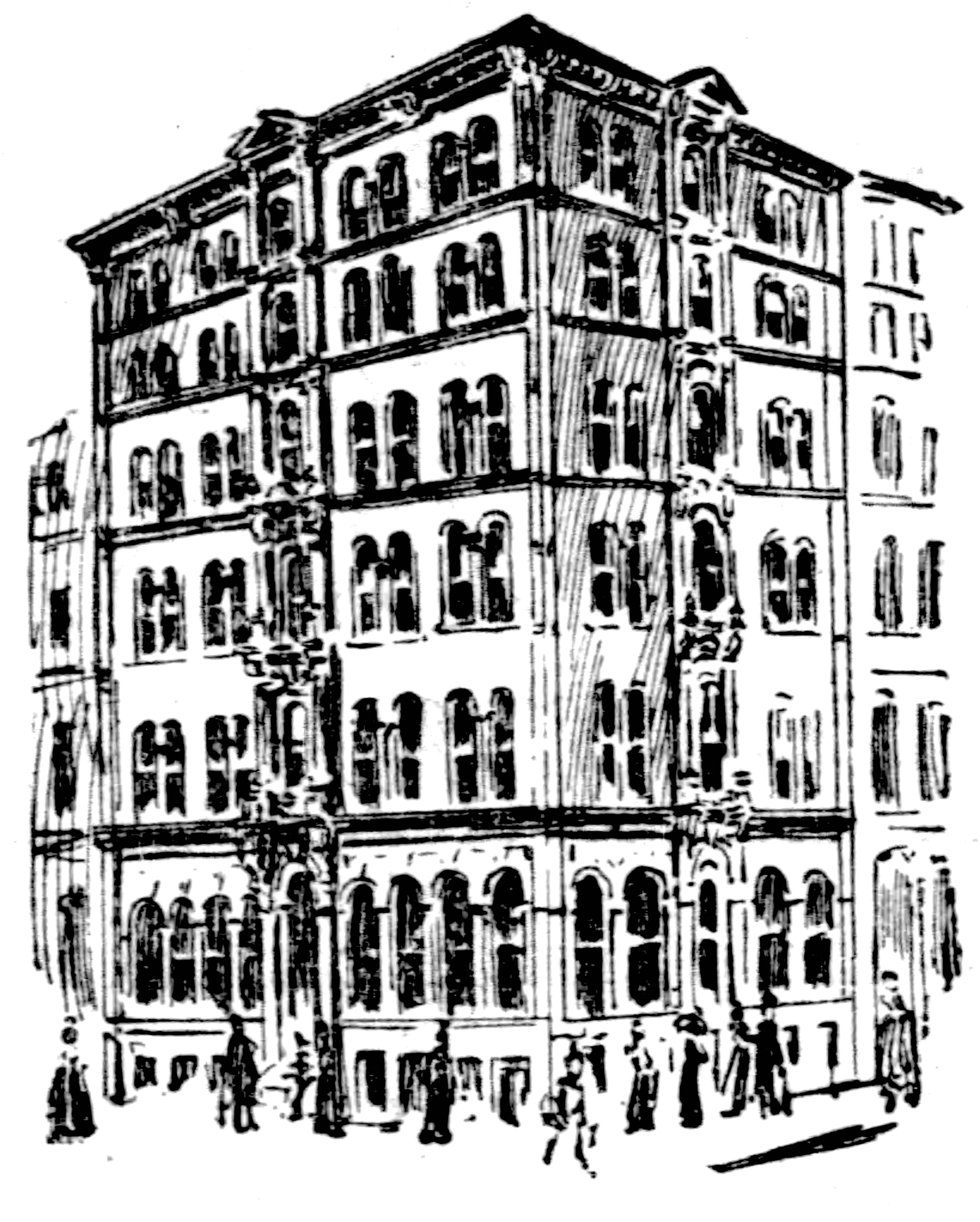 For the Protection of the Beams.
The secret of the building’s imperviousness to the flames lay in the fact that all the iron beams were coated over with heavy layers of plaster of paris. This plaster is practically a non-conductor of heat. With forethought that amounted almost to an inspiration Mr. Nixon and Architect Matz had insisted on the plaster of parts although the contractors tried to make them believe the plaster useless. The building also had brick arches throughout covered with ordinary plaster. The old Postoffice Building and the Illinois Central office building also had brick arches, but the beams were not covered with plaster, so that the beams exposed directly to the heat bent and allowed the walls to fall.

The building was 46×80 feet in dimensions and cost about $160,000. It was originally five stories high, two stories being added in 1885. W. K. Nixon purchased the ground of Becker & Kopsell, trunk manufacturers. Amos Grannis and Topper were the contractors. The first story was buit of limestone and the upper stories of Amherst, 0., sandstone.

In those days the architect of every building about town could be told by the style of his cornices. The architectural ornaments of the Nixon Building were facetiously called “Matzesque,” because they resembled in their sturdy plainness, Otto Matz. No building at that time was over five or six stories high and the Nixon Building was quite a wonder, to visitors. New features had been introduced into its construction, such as marble wainscoting and floors and corrugated iron stairways. The foundations were extraordinarily wide and made of dimension stone and concrete.

Some of the Early Tenants.
Immediately after the fire ofices in the building went at a premium. Business-men used to follow the owners around in companies of five seeking and begging for five-year losses. People expected that it would take years to rebuild Chicago, and they were willing to pay almost any price for offices. Some of the early tenants of the building were:

In 1874 W. K. Nixon sold the building to Gen. Granville M. Dodge of Concil Bluffs, Ia. Gen. Dodge afterwards purchased the Kent Building and sold out his titles to both buildings to the syndicate which is now dismantling the last relic of the big fire. 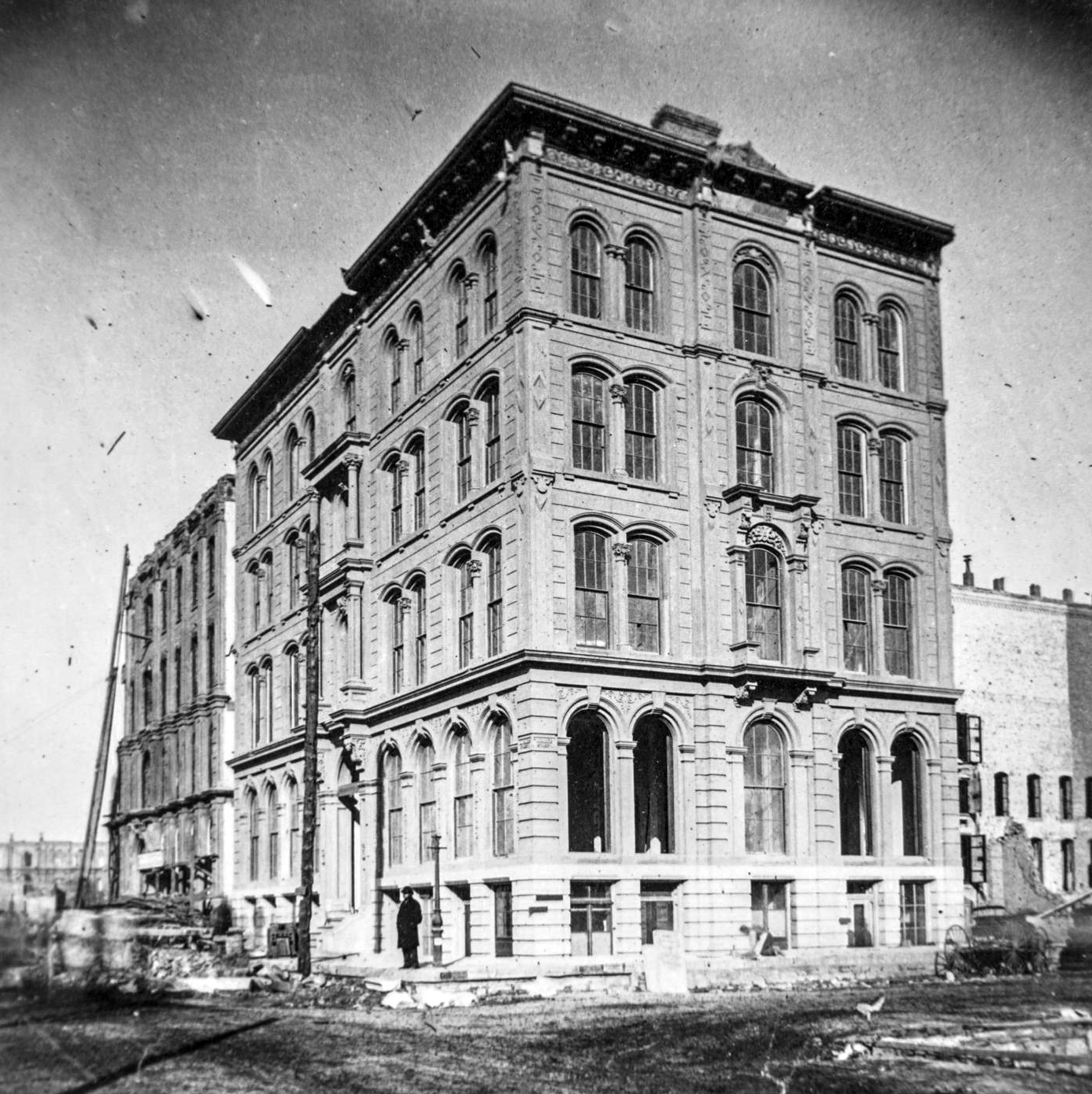 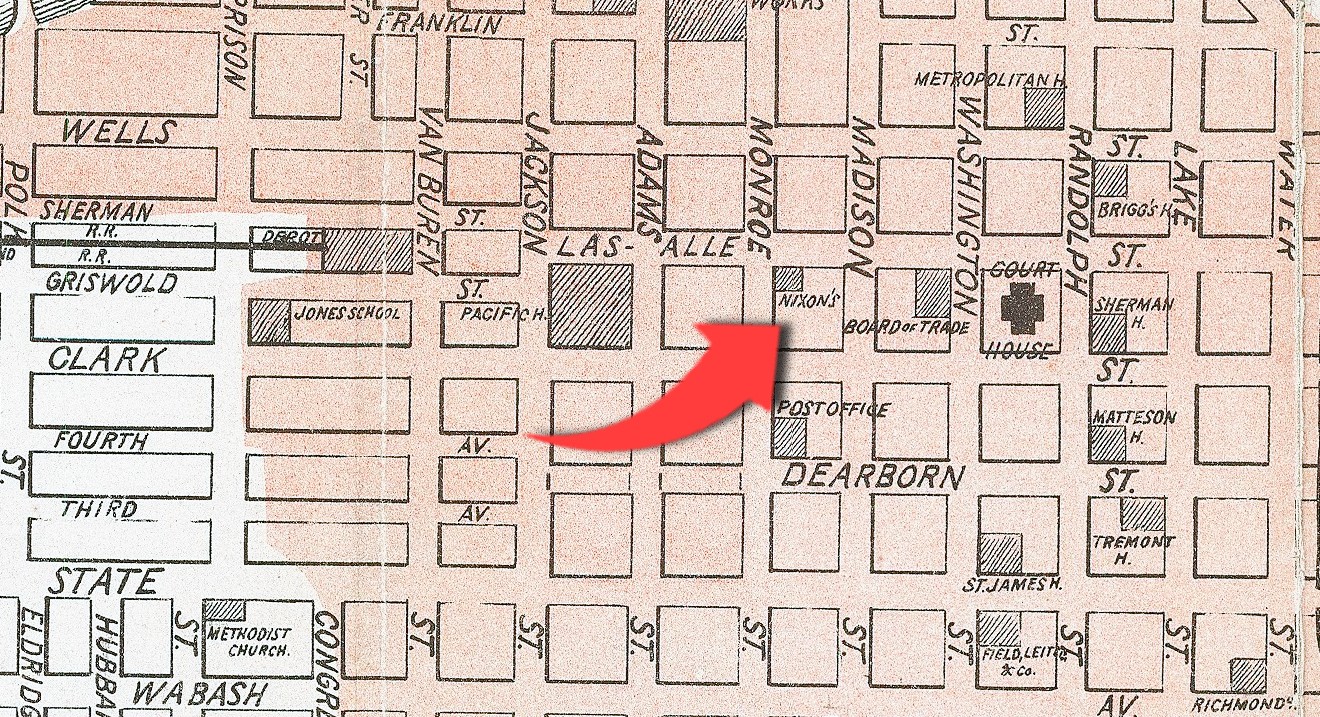 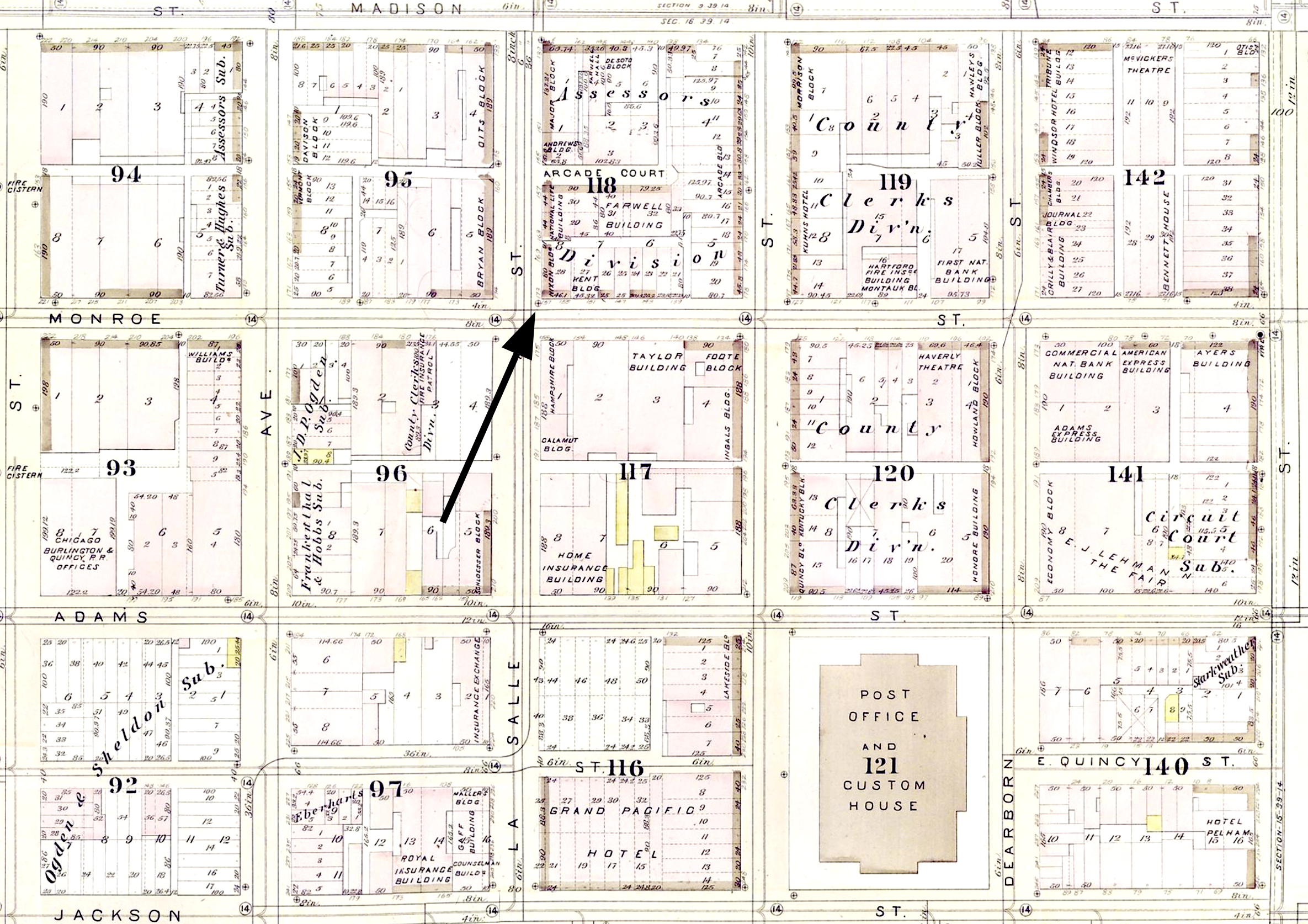