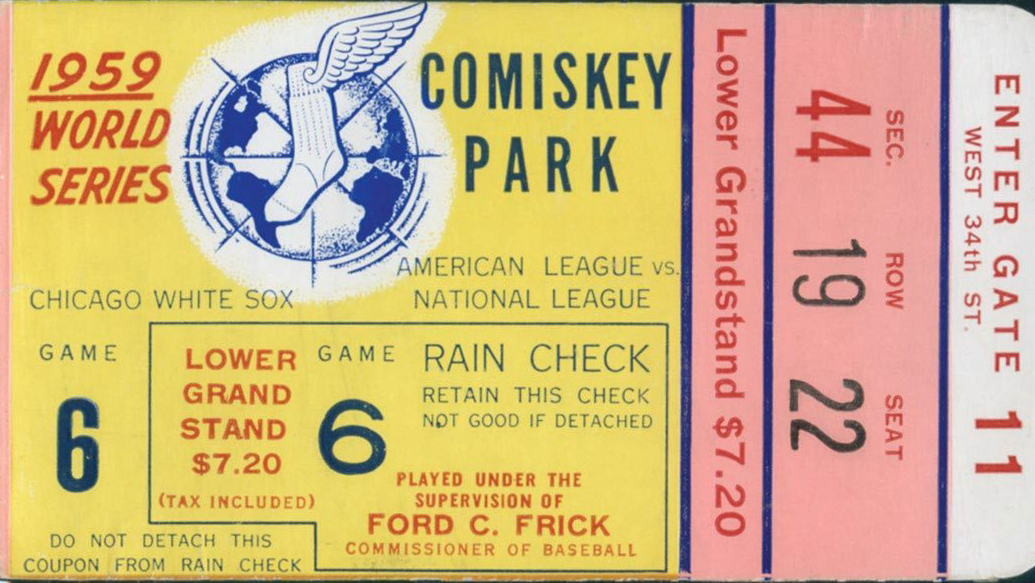 It took the Dodgers 65 years to win a World’s Series for Brooklyn. But it took them only two years to accomplish the same purpose and reach the same promised land for Los Angeles.

They did it on a gray, murky afternoon at Comiskey Park in Chicago before 47,653 fans on October 8. And they did it with aplomb, dispatch and finality.

Tired of temporizing with the hard-fighting but overmatched and punchless White Sox, the Dodgers set up Early Wynn for the kill in the third inning. They flattened Wynn and Dick Donovan with a devastating blast in the fourth inning and romped to a 9 to 3 victory which gave them the world’s championship, four games to two.

In case anyone had any doubt of the Dodgers’ superiority, this game settled it beyond all recall. The Dodgers had the bigger and more powerful guns, and their pitching finally ran away from the White Sox.

Several of the old Brooklyn hands, like Gil Hodges, Duke Snider, Jim Gilliam, Carl Furillo and Charlie Neal, played a big part in the Series triumph—but it remained for a brand new Dodger, Larry Sherry, to emerge as their over-all No. 1 hero in this Series.

The pitcher who led the Dodgers to their first World’s Series championship back in 1955, Johnny Podres, had a chance to do it again, a much better and easier opportunity this time than four years ago, when he had to bear down all the way to achieve the 2 to 0 clincher. But this time Johnny could not stand prosperity.

His mates presented him with an 8 to 0 lead, one in fact which he had helped set up with a crashing double to center that took Wynn out of his misery. But Podres couldn’t hold it.

Sherry Does It Again
He may have been unnerved by hitting Jim Landis in the head with a pitch in the fourth inning. After that, he walked Sherm Lollar, and Ted Kluszewski pole-axed a line-drive homer upstairs to right. Then Podres lost his pitching rhythm completely.

After Johnny walked Al Smith, Manager Walter Alston, no man to tarry in this situation, yelled for Sherry, his ace in the hole and in the bull pen in the second, third and fourth games of the Series.

Once again Sherry was equal to it. He looked tired and admitted after the game he was, but he held the Sox to just three hits and shut them out over the last five sonf two-thirds innings. He richly deserved the victory, his second of the Series.

Long before it was over, the Dodgers knew they had it, and so did most of the fans who kept whistling to keep up their spirits. But they knew the last hopes of the White Sox were gone.

So when the final out was made, as Luis Aparicio flied to Wally Moon in short left, there was only a perfunctory celebration by the Dodgers on the field. Center fielder Don Demeter pounded Moon on the back, catcher John Roseboro and Gil Hodges caught up with Sherry to shake his hand, but there were none of the wild scenes that usually prevail when a team has battled down to the finish to win it.

Lopez Slow in Pulling Wynn
This one had been in the bag from the fourth inning on, when the Dodgers tied their biggest inning in World’s Series history—a fat six runs, climaxed by Moon’s home run. And where Alston hadn’t tarried a bit when Podres got in a jam, there was strong suspicion that Manager Al Lopez had gone much too far with his starter, the unbeaten Early Wynn.

The consensus of opinion in fact was that Lopez went too far by even starting Wynn only two days after he had been kayoed in Los Angeles. But Lopez insisted Wynn was his man and went mighty far with him before conceding it was a mistake.

Wynn’s control was off badly. He staggered through he first and second innings, but he was almost out in the third when he passed Moon.

Then the Duke sounded the warning of doom for the White Sox, crashing a tremendous, 400-foot homer to deep left-center, and the Dodgers were in front, 2 to 0.

Even with that rather obvious warning and aware that there could be no tomorrow, Lopex let Wynn bat for himself in the third and start out bravely in the fourth.

Then it was over quickly. Norm Larker singled hard and Roseboro bunted Don Demeter, running for the ailing Larker, to second. That should have been enough, but it wasn’t. Wynn was allowed to pitch to Podres, who belted the daylights out of a powerful line drive over Landis’ head to the center field fence. 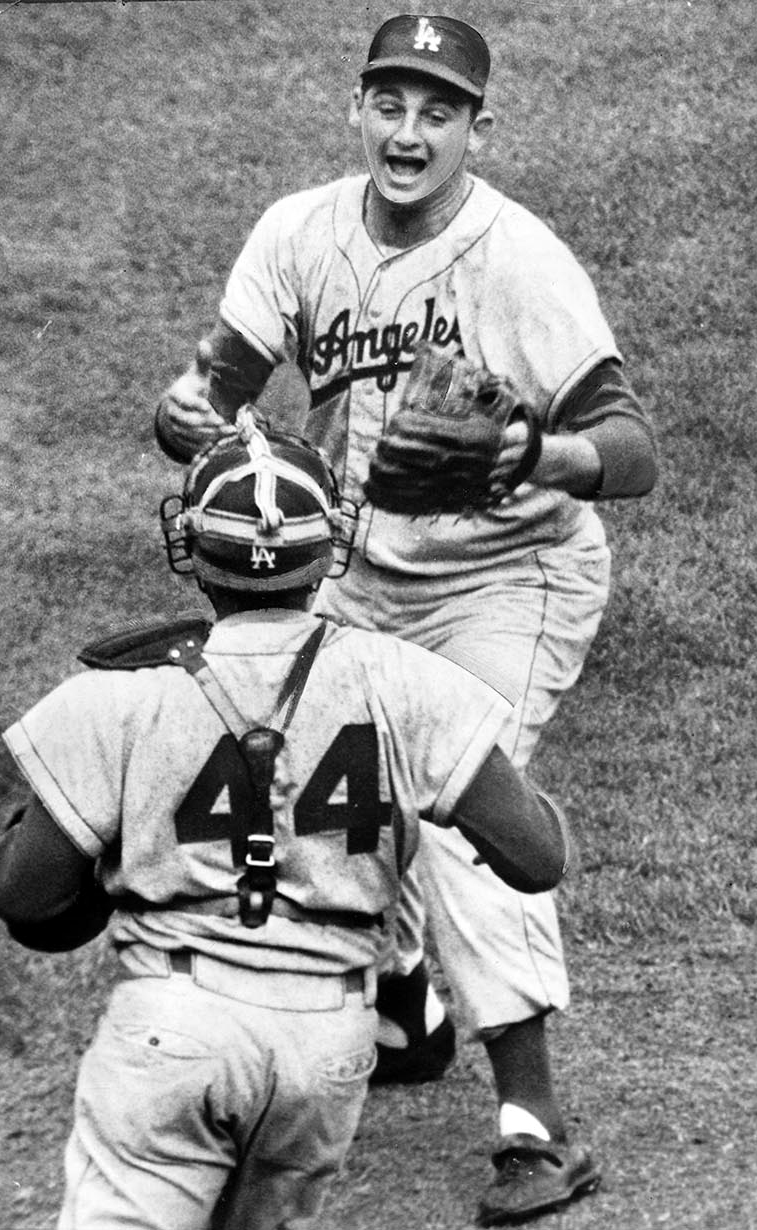 Moon Supplies Coup de Grace
School was out then, and so was Wynn. Dick Donovan, hero of the fifth game save in Los Angeles, came on. But Donovan was as bad on Thursday as he was great on Tuesday. He walked Gilliam, and Neal blasted a double to the far reaches of right-center for another run.

Moon then applied the coup de grace, a 375-foot homer to right-center. The Dodgers led 8 to 0, and Donovan was led away. Turk Lown came on to put out the fire, but much too late.

That and the White Sox threat in the fourth ended the scoring until the ninth. The White Sox kept parading pitchers—Lown and Gerry Staley and Billy Pierce—and they kept the barn door closed. Pierce reinsured his side pitching in the eighth and yielded to Ray Moore in the ninth,

In that ninth, Alston sent in Chuck Essegian to bat for Snider, presumably to win his letter or something, and Chuck write his name in the record books. He whacked Moore’s first pitch into the left field seats for a round-tripper, his second pinch-homer of the Series. No player in all World’s Series history had ever done that before, either in one or total Series.

It was a rambunctious, conclusive ending to a Series which had featured, after the first game, a series of cliff-hanging contests. This one went the other way—lopsided and conclusive.

The game also was marked by the first ejection of a combatant from the World’s Series since 1933. Charley Dressen, fiery coach of the Dodgers, was dismissed by Umpire Ed Hurley in the midst of the White Sox uprising in the fourth. Dressed was needling Plate Umpire Frank Dascoli about the ball-and-strike calls in the inning.

Hurley, working at first, reportedly told Dressen to “shut up.” Dressed told Hurly, “You shut up.” Hurley then had the final words, as usual, which were, “Get out.”

The ejection was the first for misconduct since Heinie Manush of the Senators was banished by Umpire Charley Moran in the 1933 classic. After that incident, the commissioner reserved the right to dismiss Series players, and many observers presumed that Frick had signaled to Hurley to thumb Dressen. However, the commissioner’s jurisdiction extends only to players and umpires still are permitted to expel non-combatants. 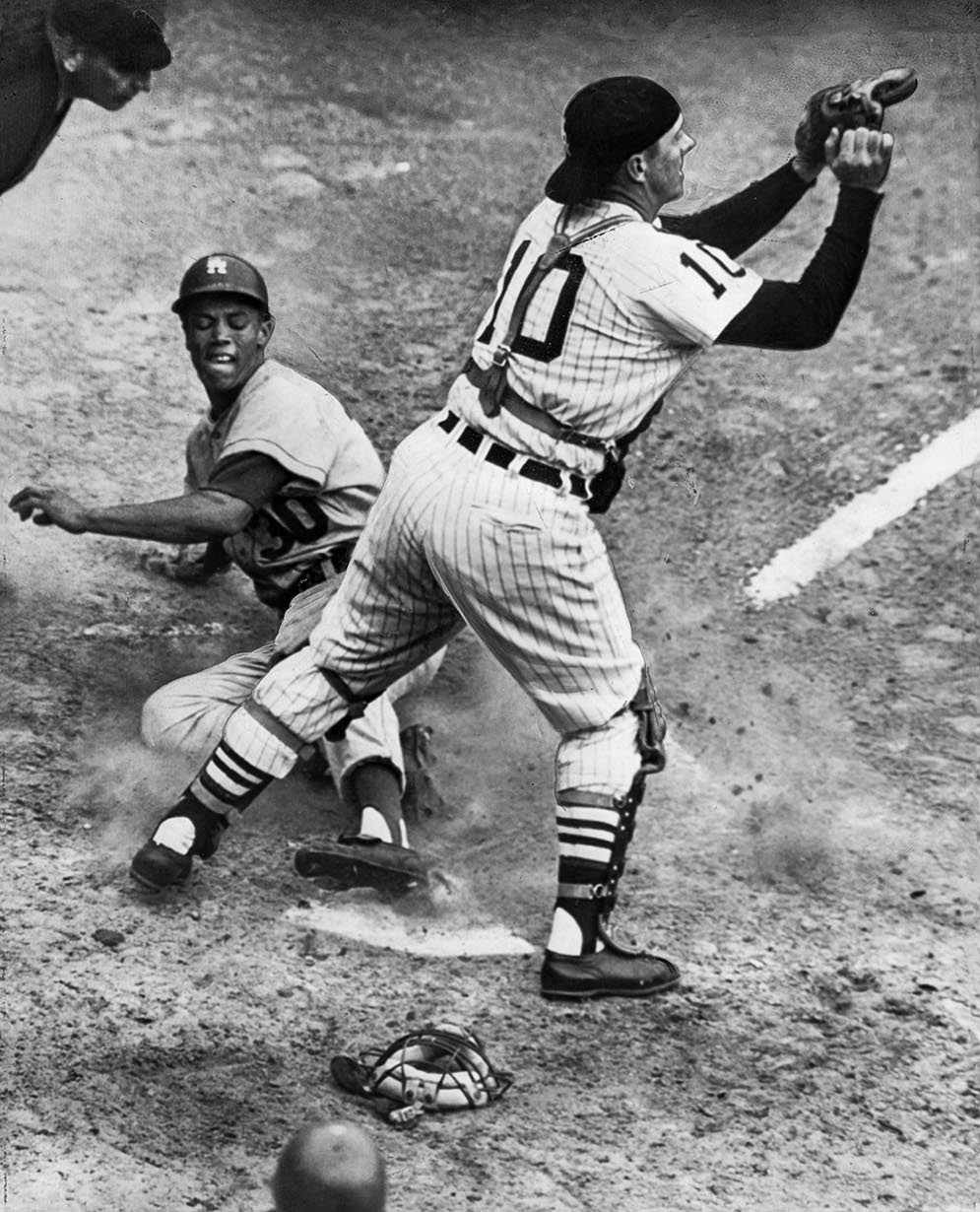 Rival first basemen, Gil Hodges of the Dodgers and Ted Kluszewski of the White Sox, were the leading hitters of the 1959 World’s Series with identical averages of .391. Each made nine hits in 23 times at bat, though Big Klu got more mileage out of his blows, driving in ten runs on his three homers, five singles and a double, while the Los Angeles belter sent only two mates over the plate with a homer, triple and seven singles.

Charlie Neal, Dodger second baseman, had the most hits, 10, but his swat figure was “only” .370. Jim Landis, White Sox center fielder, scored the most runs, six; Al Smith and Nellie Fox of the Pale Hose had the most two-baggers, three apiece, while Landis with seven whiffs, led in strikeouts. Each club had a batting average of .261.

In the pitching department, Larry Sherry won the most games, two, while Bob Shaw of the White Sox hurled the most innings, 14. For his 12-2/3 innings of relief work, Sherry had an E.R.A. of 0.71. 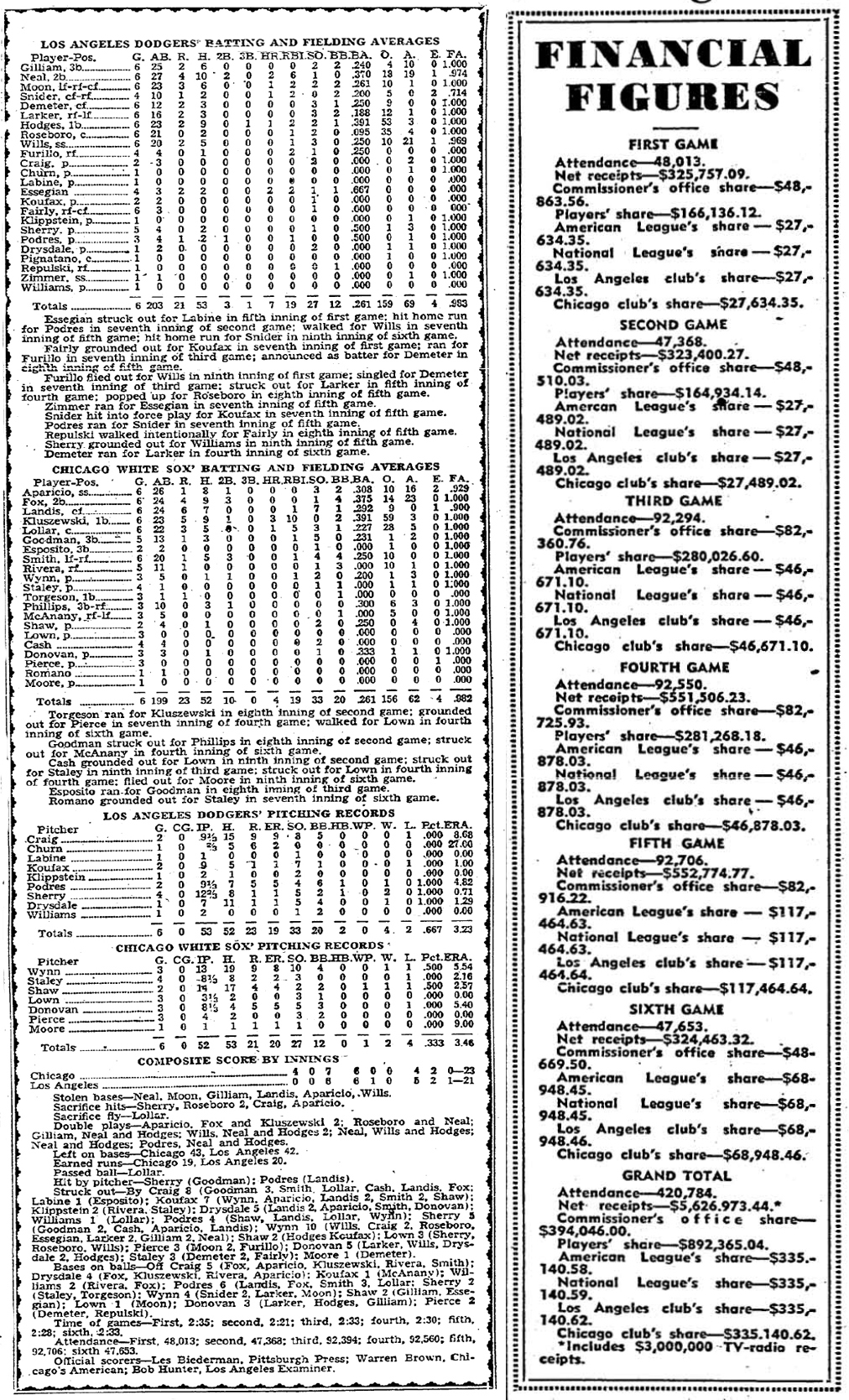 At least ten counterfeit tickets were discovered when several fans managed to get into the park, but learned their seats were for nonexistent boxes. However, Bill Vleck, convinced the ticket holders were innocent victims of a dupe, permitted the stranded persons to purchase $4 standing room tickets if they decided to remain in the park.

Bill Vleck refused to alibi for his team’s performance. “They outhit us and they outplayed us in this game,” the White Sox president admitted. “The Dodgers were a better club.”

Commissioner Ford Frick, interviewed after the game, said, “It was a terrific Series.” When Sportscaster Vince Scully suggested that “it must be a relief to the commissioner to have it end.” Frick replied, “Oooh, I should say so, I’m ready to head home.”

On the flight back to Chicago for the Series windup, some of the Dodgers were discussing how they’d spend their loot. John Roseboro plans to buy a sports car, Don Zimmer a speed boat, Rip Repulse a mink stole for his wife and automatic washer for his mother and Roger Craig a house in Los Angeles. Jim Gilliam said he was undecided. “There are a lot of things you can do with money.”

It was forty years to this day (October 9) that the Cincinnati Reds defeated the Chicago White Sox, five games to three in 1919.