LOS ANGELES, Calif.
This day—October 4—brought something new to the World’s Series.- The first game ever played west of St. Louis in the October glitter show produced a record crowd of 92.394 and a record gross gate of $549,071.76. It was set in the sprawling, roofless Coliseum, which has 33 miles of seats.

Under a summerish sun in the giant arena, the game had a perfect ending for the gigantic crowd: Dodgers, 3; Chicago White Sox, 1

A fielding play the Dodgers made had preserved their 4 to 3 victory in Chicago, which sent the combatants out here all square. And a fielding play Luis Aparicio didn’t make gave the National League champions the opening for their victory.

Carl Furillo rapped a ground ball toward short with the bases filled in the seventh inning, two out, and no score in the game. As Aparicio, moving to his left, stuck out his glove to capture the ball. it took a high hop off the sun-baked mfleld, zoomed into center field and two runs came home.

The White Sox had been warned of the pitfalls attendant to the nearby left field screen, sometimes referred to as the Chinese Wall. DickDonovan had kept Dodger hitters away from the friendly screen until Charlie Neal, home-run hero of the second game, had punched a single against it to start the winning rally.

At the end of Donovan’s near-perfect six-inning term—he had yielded only one single and walked none—his teammates had reached base 11 times on seven singles and four walks. By this time, John Roseboro’s accurate pegs had put the stopper on three of four Sox thieving attempts, including cutting down the redoubtable Aparicio. 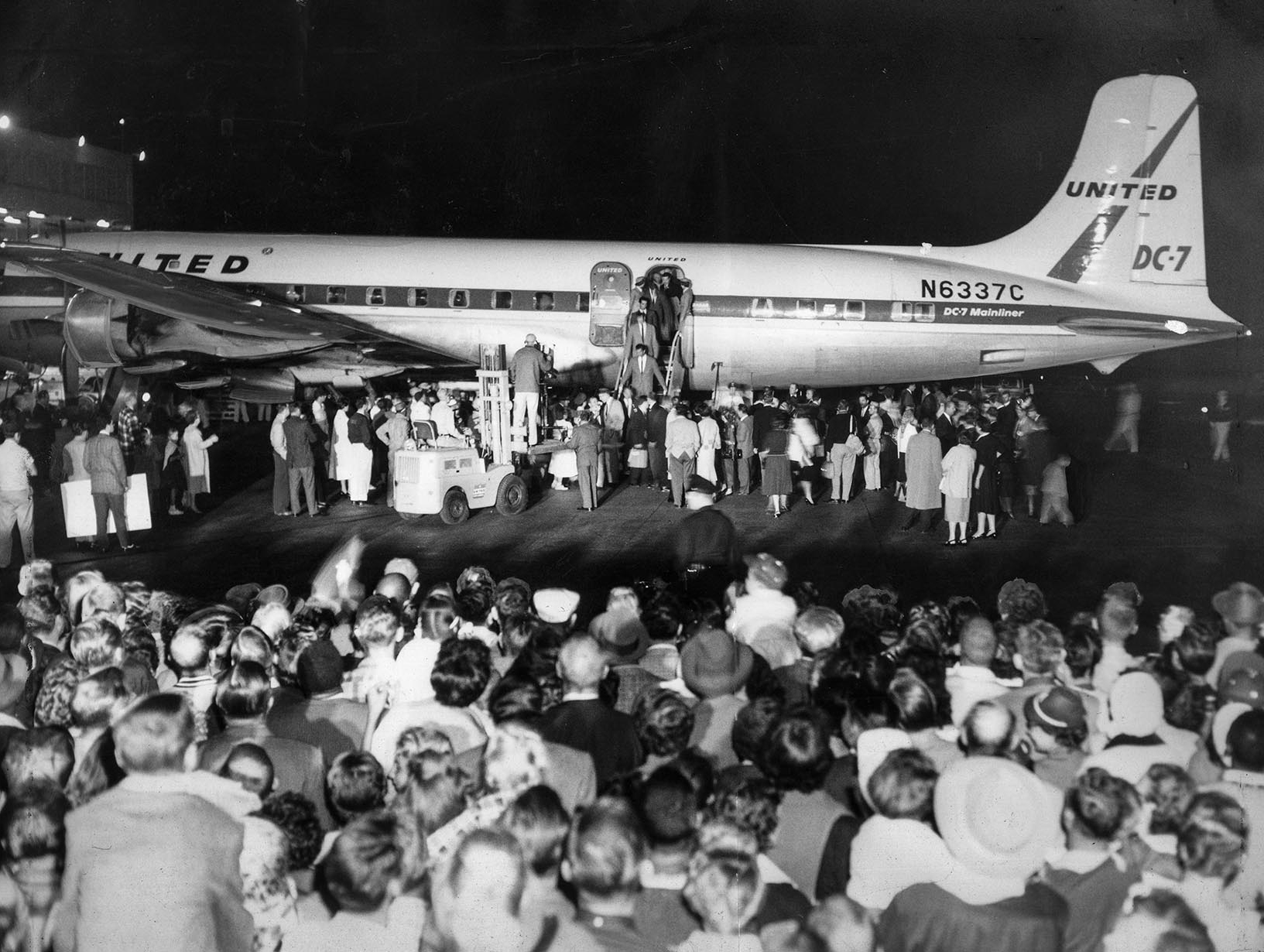 About 4,500 Dodger fans meet the team at Los Angeles International Airport after they returned from Chicago with the World’s Series tied at 1-1.

Double Plays Stymie Sox
The White Sox’ futility, too, had been painfully emphasized by double plays in the fifth and sixth. In the former inning, Nellie Fox, was out stealing after Jim Landis fanned for the first of three successive times.

So this was more of a story of a White Sox defeat than a Dodger triumph. The losers had 17 base-runners on 12 singles, four passes, and a hit batsman, Billy Goodman. Five of the Chicago hits rattled against the ridiculously close left field screen, which stretches out from the left field foul line at a point only 250 feet from the plate.

Eleven White Sox runners were stranded. The Dodgers made only five singles, an offense aided only by two walks.

This futility came in the face of Don Drysdale’s erratic pitching. The big right-hander had eight 3-and-2· counts in the first five inning und retired five in this precarious position. Additionally, he walked two others after 3-and-l counts. In the first two innings, he cast 51 pitches.

So Furino’s bounding single wouldn’t have cost the White Sox so dearly had they not squandered rich opportunities, especially in the first three innings, when they produced eight runners, filling the bases in the opening round with only one out.

As Donovan went to the mound in the seventh, Gil Hodges’ single, which fell in front of Al Smith, had been the only blot on a perfect performance. Fox tossed out Jim Gilliam at the start of the seventh, the fourteenth successive Dodger out.

Then Neal slashed a line single against the screen. Charlie was off and running with Donovan’s pitch to Wally Moon and reached second while Fox was tossing out Wally. Four consecutive pitches, all missing the strike zone, put Norm Larker on base. Donovan got only one strike over while walking Hodges to fill the bases .

It was here that Al Lopez. walked slowly from the dugout and signaled for 39-year-old Gerry Staley. Walt Alston countered by calling on 37-year-old Furillo, a hard-bitten veteran of World’s Series play.

Carl Takes, Then DeJivers
Furillo took the first pitch, a strike. Afterward, he said he did it deliberately to check against the background of white shirts glistening in the California Sun in the far-away reaches of the Coliseum. Then he delivered his crucial bounder.

Aparicio, because of the white-shirted background in the rear of home plate, was slow charging the ball. But it seemed he would get there in time. That is, before it took the hop that eluded his glove. Neal and Larker tromped across the plate for the two big runs on only the third hit by the Dodgers.

The White Sox. famed for their late inning finishes, put one in motion when Ted Kluszewski led off the eighth with a line single to left-center. Sherm Lollar dropped a single in front of Moon, who apparently lost the ball in the sun. Kluszewski stopped at second, having to hoId up until he saw the ball land safely.

This finished Drysdale, and Larry Sherry, who had protected Johnny Padres’ victory in the second game, came to the mound. His first act was to hit Goodman on the outside of his right. knee after getting over two quick strikes. Billy fell to the ground in pain and Sammy Esposito ran for him.

Now Sherry faced Smith, who had fanned in the third with two runners on and slapped into a double play in the sixth. This time Al hit the ball hard to Maury Wills, but it was a double play via second base. Kluszewski scored on the twin-killing. On a first pitch, Jim Rivera lifted a puny fly to Johnny Roseboro.

Staley yielded a run in the eighth, which Wills launched with a single to right. He advanced on Sherry’s sacrifice and came in after Neal lined a double off Esposito’s leg. Again, the white background was blamed. Esposito never saw the ball until it was too late to field it. Wills scored easily as ball bounced into the spacioUs foul area off the third base and left field foul line.

Sherry easily protected the lead in the Chicago ninth. Norm Cash supplied the first out by whiffing for Staley. Aparicio was called out on strikes, but Fox delayed the end with his third single, a drive to center. Landis ran the count to 3-and-2 before fanning.

Big D Whiffs Aparicio
Drysdale’s first 3-and-2-count was on Aparicio at the start of the match, but he whiized a side arm third strike past the little shortstop. Fox walked and raced to third when Landis dropped a broken-bat single into center.

Landis stole second without drawing a throw and with the count 3-and-0 on Kluszewski, Ted was purposely walked. The strategy paid off when Lollar fouled to Gilliam at a time Sandy Koufax and Chuck Churn were warming up frantically. Then Goodman bounced to Hodges.

Smith flied out in the Chicago second, but Rivera walked. He was nailed stealing after a head-first slide into second. Donovan lined a single off the screen, in left-center and Aparicio walked. Fax carried the count to 3-and-2 berore he was out on a slow roller, Hodges to Drysdale.

Drysdale eliminated Landis and Kluszewski in the third, but Lollar singled to left-eenter and Goodman slashed a liner against the screen. After Lollar was almost trapped off second by Roseboro’s throw, Smith went down on strikes.

Gillam made a dazzling backhanded catch of Rivera’s foul after a long run in the fourth, holding the ball after bumping into Wills. After Donovan grounded out, Aparicio singled. This set up for the first time in the Series a clear-cut duel between the little speedster and Roseboro. Everyone knew Lu would break for second. He got a good jump. but was out on the perfect throw.

Fox gave the sputtering White Sox offense a fresh start. When he singled off the mesh at the opening of the fifth. The count was 3-1nd-2 on Landis when he fanned for the front end of a double play, Roseboro cutting down Fox at second. Big Klu completed the inning with a foul to Gilliam.

Double Play Snuffs Out Sox
Donovan enjoyed his fourth successive clear inning in the fifth. Kluszewski backed up for Larker’s hard bounder and underhanded the ball to Dick at first. Hodges, after smashing a long foul far to the left, fanned on a slow, outside curve. Don Demeter grounded to Goodman.

After Lollar sent Moon almost into outer space in right-center for his drive at the outset of the sixth, Goodman hit the screen for the second time, the ball striking more than half way up. Smith had a count of 2-and-1 when Gilliam started a double-killmg on his grounder.

Roseboro, first up in the Dodgers’ sixth, gave the crowd a momentary thrill with a lengthy drive, but Rivera made the grab in right-center, past the 315-foot station. Fox tossed out Wills and Donovan fanned Drysdale.

Rivera’s drive down the right field line was foul by inches, a prelude to the first out in the seventh when Jungle Jim lined to Wills. It was 3-and-2 when Aparicio jingled the left field screen. Looey failed to fall for two pitchout traps before Fox singled to left. But it, again was strikeout, time for Landis.

Long after the Dodgers had made their victory official, controversy raged on whether Aparicio had been- tardy in starting for Furillo’s game-winning single.

Lopez said Aparicio definitely did not break quickly when the ball was hit. The Senor, without rancor suggested that Lu was guilty of a tactical error when he went for the ball with both hands, instead of letting his gloved hand do all the work.

Lopez thought that had Lu tried for the stop with his gloved hand, he would have been more mobile in going for the ball after it took the unexpected hop. 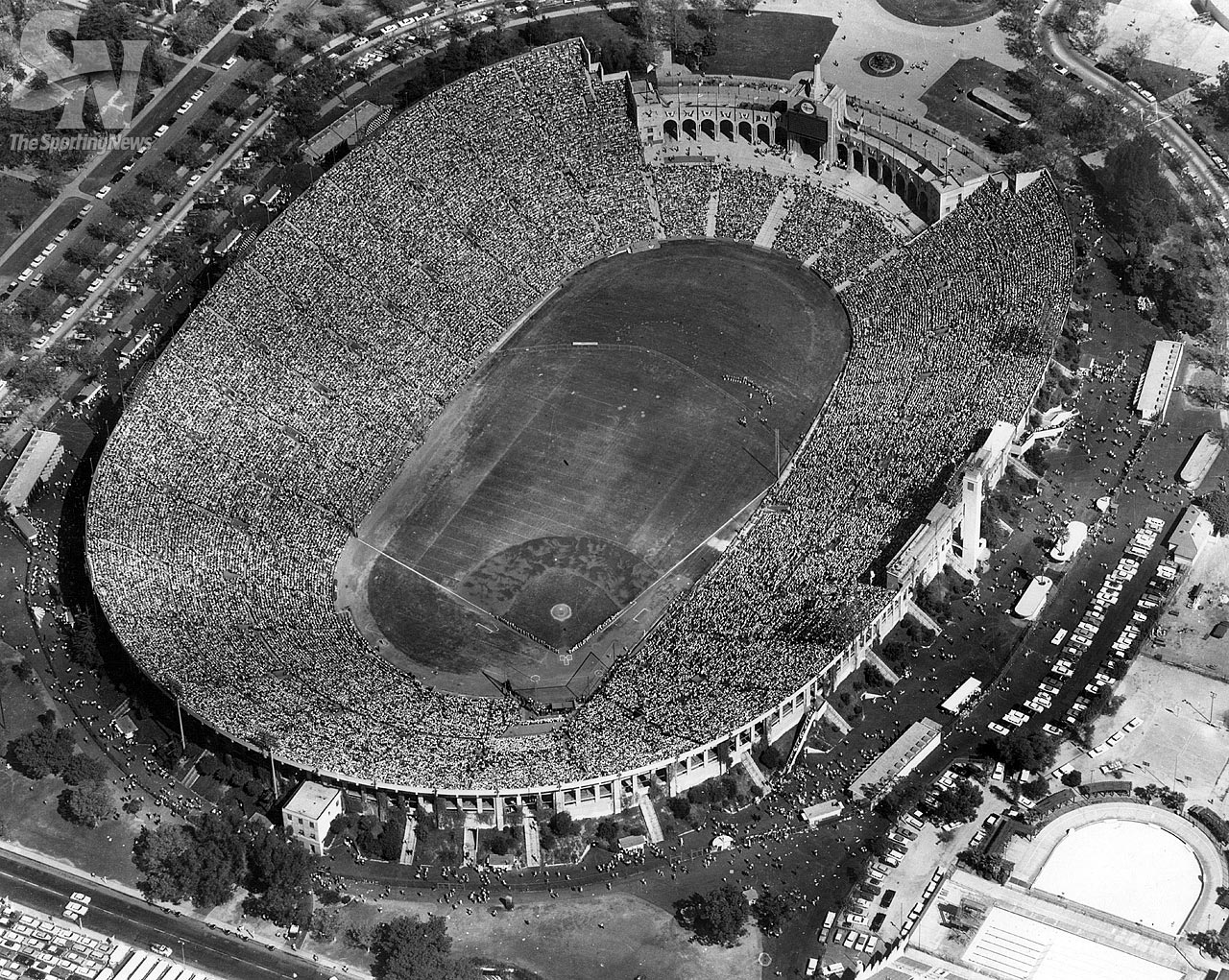 The Dodgers did not argue when Don Demeter was called out at first base on his double-play grounder to Luis Aparicio in the second inning. However, photographs taken of the play and printed in newspapers all over the country purported to show that the ball still was four or five feet away from Ted Kluszewski’s glove when Demeter’s foot hit the bag. The call had no bearing on the game since Dick Donovan retired the next 13 batters in succession.