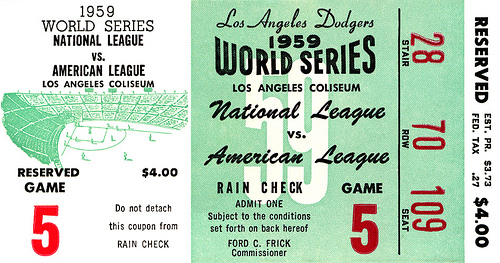 This was by far the best game to date. The White Sox, on the verge of elimination, doggedly made a fourth-inning run off fireballing Sandy Koufax stand up for a 1 to O. victory. October 7. sending the big show back where it started, Comiskey Park.

In one of the most prolonged one-inning battles of managerial wits, the White Sox used three pitchers and the Dodgers called on three pinch-batters. This eighth inning maneuvering threw the record crowd of 92,706 into an uproar. And for the first time in Series history, three pitchers teamed up for a shutout—Bob Shaw, Billy Pierce and Dick Donovan.

Actually, Pierce. who relieved Shaw in the cardiac eighth, did nothing more than intentionally pass Rip Repulski. Donovan, heartbreak loser here on October 4. retired the National League champions after the bases had been filled with only one out. Donovan cut down the Dodgers in order in the ninth.

This second victory for the American leaguers also was their second shutout. The game also was the third to be decoded by one run, the Dodgers having won the two others. The Dodgers set a Series record by using six pinch-hitters. Jim Gilliam became the the twenty-ninth World’s Series player to make four hits in a game.

The huge assemblage set a single-game record—56 more than the previous day’s revised upward total of 92,650. It also was announced that the first game here drew 92,394, which was 100 more than first reported.

White Shirts Bother Fielders
The treacherous background of white formed by the crowd in the huge oval, jeopardizing fielders more than the batters, again was a prominent factor. Outfielders on both teams had hair-raising experiences trying to “pick up” the ball in the eye-dazzling background. Jim Landis dropped an easy fly which started Shaw’s troubles in the eighth.

And that’s as good a place as any to start the story of the battle. Landis moved in for Wally Moon’s fly, crouched and squinted, but blinded by the glare, dropped the ball. The three-member board of scorers, sympathetic to the situation, ruled it a single.

Norm Larker worked the count to 3-and-1, fouled for strike ywo and then drove the ball to right. Jim Rivera, who does not use sun glasses, shaded his eue with his glove and pulled in the ball.

Gil Hodges gave the White Sox a scare when he lashed a long foul to left, and it even caused Al Lopez to come out to talk to Shaw. Hodges followed with a low liner just out of Nellie Fox’ reach to the right. Landis made a good throw to third, but not in time to nail Moon.

On the throw, Hodges went to second. The Dodgers and the spectators were sensing the kill. Walt Alston sent up Ron Fairly, a left-handed swinger, to bat for Don Demeter. Here Shaw was replaced by Pierce, a southpaw who had arm trouble in 1959.

Lopez again sauntered to the mound, took the ball from Pierce and called in Donovan to pitch to the right-handed Furillo.

The din increased as Donovan faced Furillo in the realigned battlefronts. The White Sox stayed back in double-play formation. Furillo ignored a low pitch, but Donovan pitching deliberately without a windup, evened the count with a called strike.

A foul came off Carl’s bat and Sherm Lollar plunged back, but the ball was out of reach, hitting the screen. Furillo popped the next pitch to Bubba Phillips just off third base.

Don Zimmer, one of the substitutes the Dodgers used, took a called strike., then sent a an easy fly to Al Smith. Three pinch-batters in an inning tied a Series record. Cleveland last done it during the 1954 Series.

The White Sox run, so mountainously large at the finish, came home during a double-play. Fox started the fourth inning with a ground single to the right of Hodges. It was 3-and-2 on Landis when he lashed a line single to right-center, Fox easily reaching th1rd.

Lollar, swinging at a first pitch, grounded sharply to Charlie Neal, who stepped on second and gunned the ball to Hodges for a double play, Fox scoring. Later, Koufax observed that if foresight was as good as hindsight, the play would have been made at the plate. 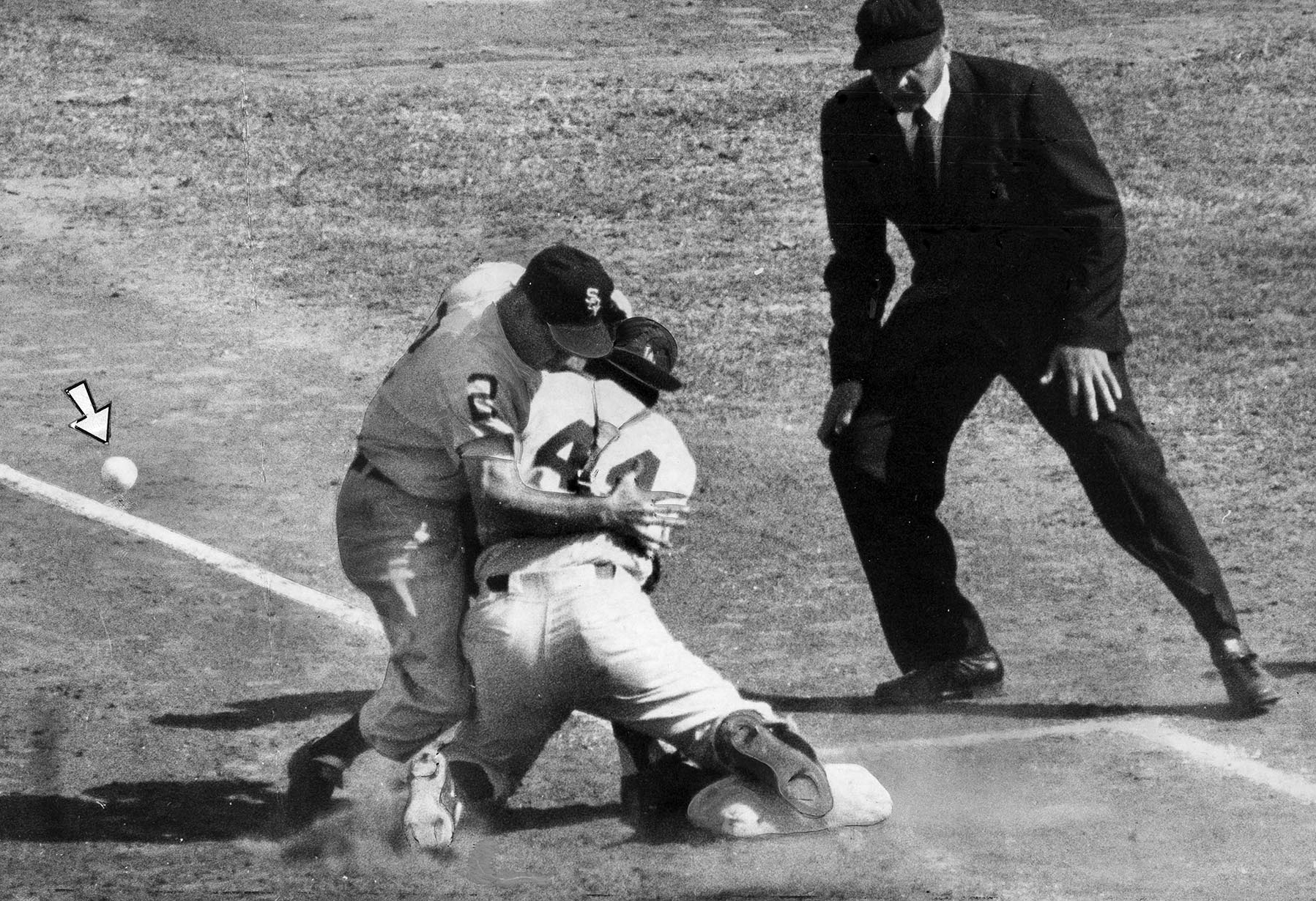 Dodger catcher Johnny Roseboro battles the White Sox’ Nellie Fox for possession of first base in fourth inning. Roseboro Had trailed Fox to first, after the latter singled, and nearly picked him off on Moon’s throw, Fox scored in the same inning.

Rivera Makes Circus Catch
Shaw had two other harrowing innings before the eighth. In the Dodger fourth, Hodges tripled with. one out, but the White Sox right-hander escaped. Rivera made a spectacular catch in the seventh to prevent two runs from scoring. The Dodgers made nine hits off the stately Shaw, who walked only one and cast a wild pitch.

The White Sox, who had been outhitting their opponents, were held to five singles and had only five stranded to the Dodgers’ 11.

Koufax, a 23.year-old lefty Dodgers’ hardest thrower, needed seven pitches, all over the plate. to retire the White Sox in the first inning.

When Jim Gilliam singled to right off for the Dodgers, it seemed an omen that the Series would end this day. Aparicio went far for Neal’s foul, Gilliam beating his throw to second. The threat was turned back when Shaw tossed out Moon and Larker.

Koufax cast 13 pitches in the second, all but two in strike range. Lollar bounced to Gilliam, Ted Kluszewski flied to Larker and the same outfielder took Smith’s fly. Continuing the economy of pitches, Shaw threw only six in the Dodgers’ half.

Phillips singled off the ridiculous screen at the start of the third, and after McAnany popped to Hodges near the mound, Shaw sacrificed. But the White Sox were given additional proof that the Coliseum is a funny park, indeed. Aparicio singled to left, but Larjer was playing in so close that Phillips returned to third after rounding it. Meantime, Aparicio raced toward second, but was out after Gilliam took Larker’s throw and pegged to Neal.

Nellie Fox and Luis Aparicio, the White Sox flashy infield pair, were never involved in a collision during the regular season, but they missed signals and banged into each other while chasing Charlie Neal’s pop fly in the first inning. However, little Looie grabbed the ball and held onto it.

Hodges Whacks Triple
Gilliam drove a semi-line drive single to right with two away in the third. He was off and running when Neal singled off the Iron Curtain, reaching third. There he stayed, Fox stepping back of second for Moon’s bounder and a force out.

Hodges’ triple in the fourth was a terrific smash to right-center, Landis finally catching up with the ball at the screen near the 400-foot mark. Shaw fielded Demeter’s tapped roller, twice “looked back” Hodges to third and then nailed the fleet Demeter on a close play. Roseboro, with a two-strike count, sent Aparicio into short center for his pop, which broke Johnny’s bat.

McAnany walked after two were out in the White Sox fifth, but Shaw fanned. Two were out in the Dodgers’ portion when Gilliam drove a half-speed single over second for hit No. 3. Then Jim stole second, getting a good jump on Shaw and sliding in ahead of Lollar’s high throw. It was the sixth steal for the Dodgers in six attempts. The third out came when Fox took Neal’s pop fly.

The only Chicago offensive move in the sixth was Aparicio’s leadoff single, Demeter reacting slowly because of the glaring background. Hodges singled off the left field mesh with two away in the Dodgers’ sixth, but was forced at second, Aparicio to Fox.

Shaw had retired Roseboro on a short fly to McAnany in the seventh when Chuck Essegian batted for Wills. Essegian walked on a low pitch after a 3-and-2 count. Dob Zimmer ran for him. Duke Snider grounded to Aparicio. Lu tossed to Fox for the force.

Johnny Podres was sent in to run for Snider as Alston started expending his talent. Gilliam’s fourth hit was a single. It was while Neal was up that Smith moved to left and Rivera was sent from the bench to Right field.

The runners moved to third and second on Shaw;s wild pitch on the inside. This was the situation when Rivera went far into right-center for his over-the-shoulder grab on Neal.

Lopez later denied this was an inspired substitution, saying the primary reason was to transfer Smith to left in anticipation of Neal’s hitting there.

Stan Williams faced the White Sox in the eighth. Rivera hitless in the Series, walked and advanced on Shaw’s bunt. Jungle Jim took third while Neal was tossing out Aparicio, but Landis lined to Demeter. 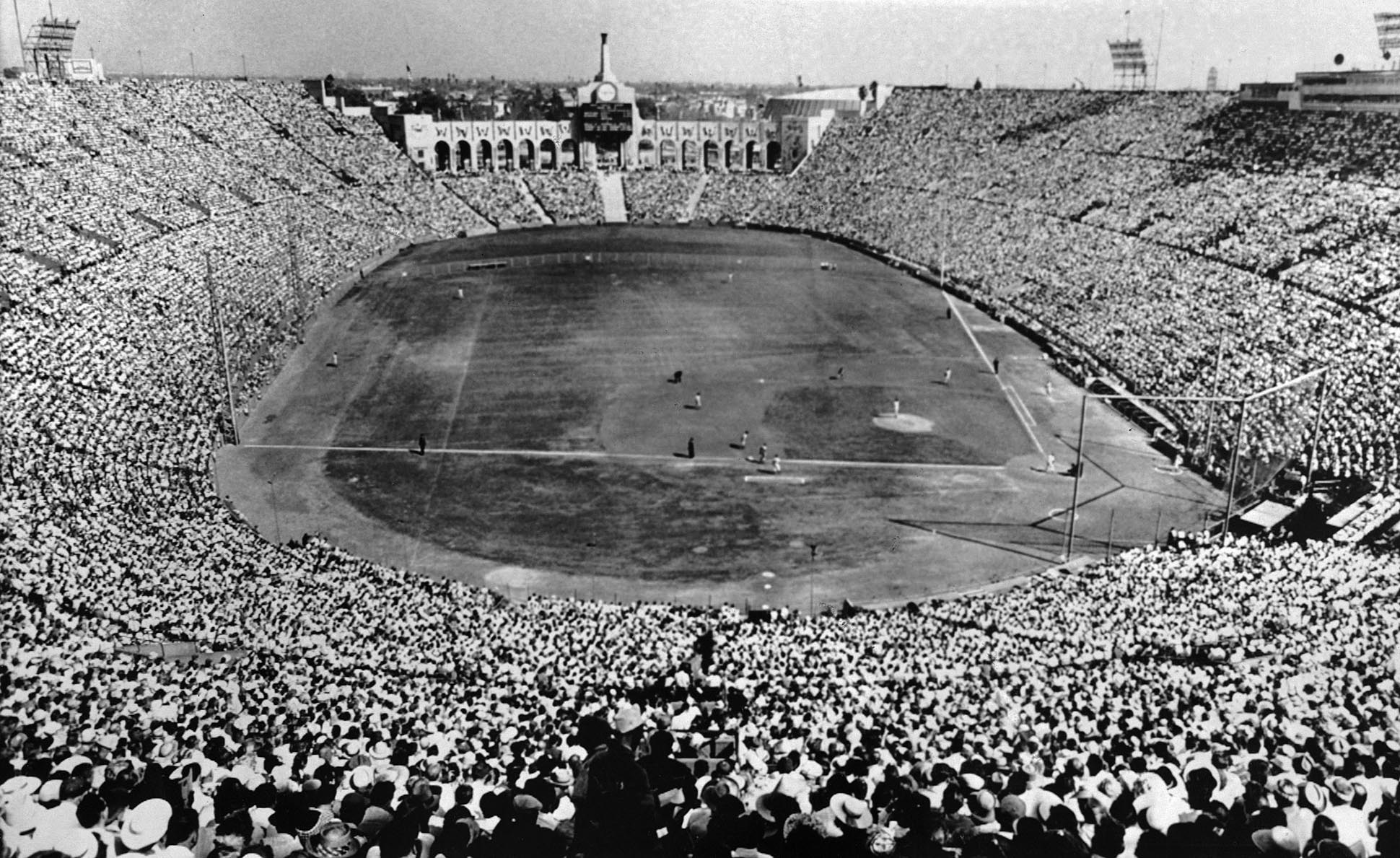 One of the most inconspicuous spectators in the Coliseum was Hall of Famer Ty Cobb, the greatest of all players. Cobb occupied a seat high in the stands above the American League dugout.