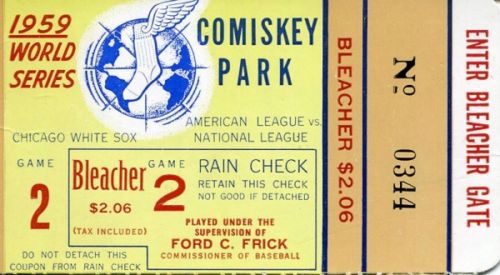 The White Sox seemed bent on making it two straight over the Dodgers until the cherished hopes of 47,368 spectators were dashed by home-run power. The Dodgers had been shut out in the final game of the 1956 classic by the Yankees, 9 to O. It had been even worse in the opener here, 11 to 0.

Now, in this second game against the White Sox, October 2 , the National League champions were behind 2 to 0, after four innings. That made it 22 consecutive World’s Series rounds without scoring.

Bob Shaw had the lead over Johnny Podres when the Dodgers came up in the fifth inning. Two were out when Charlie Neal, 28-year-old 160-pound infielder, belted a home run into the left field seats. It was still 2 to 1 when the Dodgers came up in the seventh inning. Again Shaw knocked off the first two batters before Walt Alston sent Chuck Essigian, a right-handed batter, up for Padres.

The count was 3-and-1 when Essigian smashed a home run halfway up into the upper stands in left-center field to deadlock the score. It also was 3-1md-1 on Jim Gilliam when he walked.

Neal took a ball before he drove a terrific shot into the center field bullpen, just to the left of the 415-foot marker, for his second homer ot: the day. Billy Pierce, warming up for the White Sox. caught the ball. At this point, Turk Lown replaced Shaw and finished the game.

For the first time, the Dodgers led in the Series. They were to survive a stormy eighth inning to finish with the 4 to 3 triumph which squared the Series and sent the rivals to Los Angeles for resumption of the struggle on Sunday, October 4.

Ted. Kluszewskl started the Sox eighth against Larry Sherry with a bloop single to center and Sherm Lollar lined a single off Gilliam’s glove. Had the third baseman handled the ball, it would have been a double play. 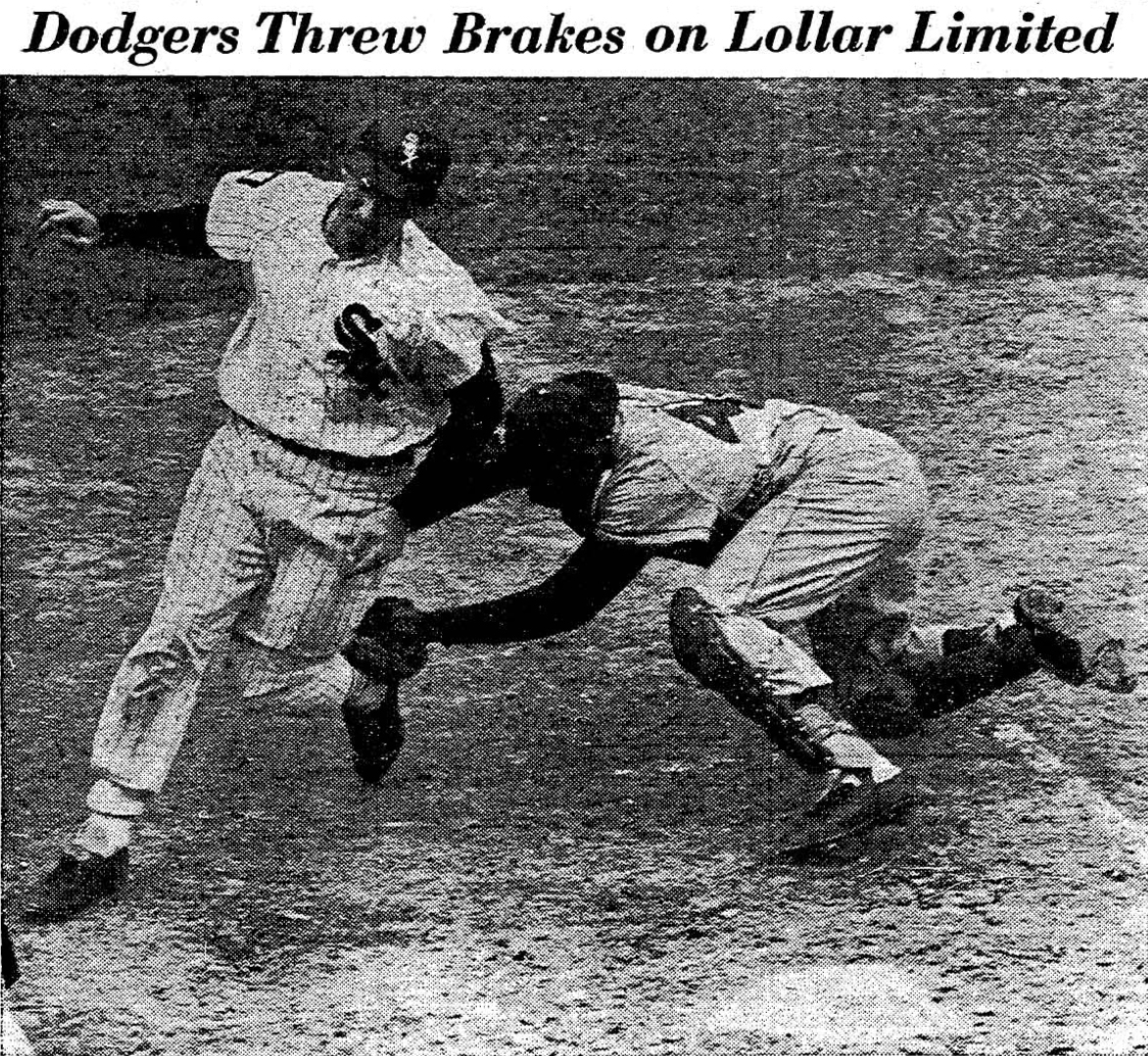 THE BIG DEFENSIVE PLAY in the Dodgers’ 4 to 3 win in the second game took place in the eighth inning when Sherm Lollar was nailed at the plate trying to score the tying run. Lollar, on first base when Al Smith doubled off the left field wall, was retired with plenty to spare on the relay from Wally Moon to Maury Wills to John Roseboro.

Smith Slams Double
Earl Torgeson went to second to run for Kluszewski—this to put a fast man there in a bunt situation to minimize a forceout at third.

Al Smith fouled off a bunt attempt and took a second strike. When the count was 3-and-2, Al connected. The ball went between Wally Moon and Duke Snider. bouncing against the wall.

Moon gave it the old college try. Lollar hesitated as he reached second, still not convinced Moon wouldn’t catch the ball. It was a fatal pause.

Tony Cuccinello, coaching at third, waved both runners home. not knowing that Lollar had halted briefly. Togeson, of course, made it easily to the plate, but Lollar was several feet from home when Johnny Roseboro took a quick and perfect relay throw from Maury Wills, who had taken Moon’s peg from near the wall.

Smith moved to third on the play. There was only one out, and he represented the tying run. The big chance, however, went glimmering when Billy Goodman struck out as a pinch-hitter for Bubba Phillips and Jim Rivera fouled to Roseboro. That was the Sox’ last chance.

The crowd, on a mild, sunny afternoon, had visions’ of another romp when the White Sox scored twice in the first inning, with the Dodgers guilty of fuzzy play, as they had been in the opener. 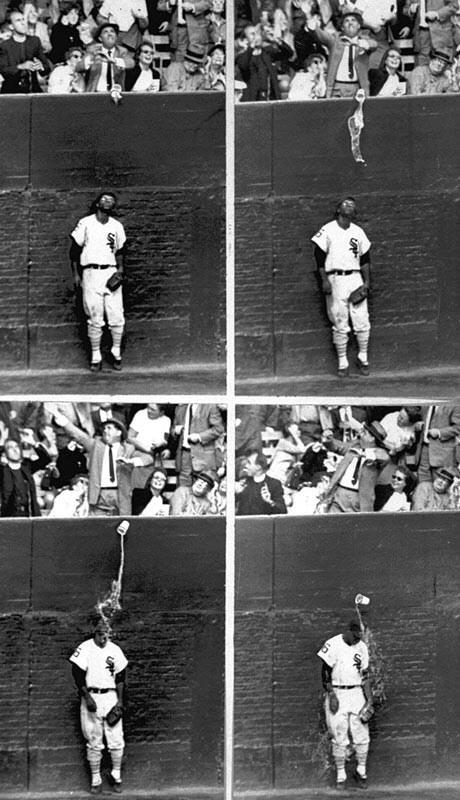 Fox Flies to Larker
Luis Aparicio drove a double past Gil Hodges to start the assault, Gil falling as he dove for the ball. The ‘Chicago shortstop advanced to third after Nellie Fox flied deep to Norm Larker.

With the Dodger infield moved in, Jim Landis walked after a full count, bringing up Kluszewski· The count was 2-and-2 on Ted when he grounded to Neal. Charlie, in his haste to set a double play in motion, fumbled the ball. After he’d retrieved it, his only play was at first base, Aparicio scoring and Landis going to second.

There was one strike on Lollar when he sent a spinning grounder which trickled off Neal’s glove into right field for a single, bringing Landis across. The Dodgers drew their fourth error of the Series when Wills messed up Smith’s grounder, but Phillips forced Landis at third on a ball handled by Gilliam.

Shaw, who had escaped trouble in the first inning after singles by Moon and Snider, also eluded dire consequences in the second when Wills and Podres singled with two out. Kluszewski made a tumbling one-handed stab of Gilliam’s foul liner for the inning ending play.

The White Sox also produced two runners in their half after two were away. Aparicio singled to left and Podres was so concerned with holding him on first to prevent a steal that he walked Fox. This opportunity came to naught, however, when Landis struck out.

The third inning was a mild one. Neal popped to Phillips, and Moon and Snider were tossed out by Fox. After Neal threw out Kluszewski and Lollar fanned, Smith walked on four pitches in the Chicago third, but Wills went to his left on PbiUips’ grounder for a force play at second.

Larker produced the Dodgers’ first out in the fourth on a high one to Phillips. Hodges whiffed on a wide, outside curve, but Aparicio dropped Roseboro’s low pop fly on the grass while in an awkward position. The sun also might have bothered Lu, and Roseboro was credited with a single. The Dodgers were through when Aparicio sped into foul territory back of third for Wills’ pop-up.

Larker Grabs Klu’s Drive
Shaw singled in the Chicago fourth after Jim McAnany grounded to Gilliam, but Aparicio flied to Snider and Fox forced Shaw on a bouncer to Wills.

In the fifth, the White Sox were extinguished on outfield plays. Landis drove a long one to Larker. Kluszewski gave the crowd a fleeting thrill before the wind held up his drive in right field. Larker catching it. Moon took Lollar’s fly.

The fans still had that comfortable feeling, when Shaw breezed through the Dodgers in the sixth. Snider worked the count to 3-and-2 before Fox backed up on the grass to hie; right and nipped him at first. Then Nellie went to his left, throwing out Larker. Aparicio moved a few feet back of second and waited for Hodges’ pop to settle in his glove.

Wills threw out Smith at the start of the White Sox’ sixth, but Phillips, after two strikes, doubled down the line into the left field corner. Bubba moved to third after McAnany’s long fly to Larker, but Wills nailed Shaw at first on his grounder.

The stirring events of the seventh and eighth innings have been recounted. Lown held the Dodgers in the ninth, but not without some difficulty. Wills was out on a third-strike foul bunt and Ron Fairly flied to Rivera. but Gilliam punched a single to Goodman’s left. When Fox Was slow in covering, Lollar had to hold up his throw and Gilliam stole second.

It was the third base the National leaguers had swiped in the Series to none for the Go-Go boys. Neal ended the Los Angeles offense with a long fly to Rivera.

When it was all over, Cuccinello’s action in waving home the the slow-footed Lollar on Smith’s double became a highly-debated incident. Cuccinello, one of the smartest coaches at giving the green or the red light to baserunners, defended his action:

I sent Sherm in all the way. Remember, it was 3-and-2. on Smith. so both Torgeson and Lollar were running with the pitch. I figured the way the ball was hit. Sherm, even granting he’s not speedy; would have time to score.

I was watching the ball, not Lollar and didn’t know he had slowed up at second. So I kept waving him on and yelled ‘Go, Go!’ I knew if they make the play at third, Lollar’s sure to score and if they throw to the plate, Smith would be at third with the winning run if Lollar scores.

Lollar explained that Smith’s drive was “in the hole,” but be thought there was a chance Moon would make the catch. It was for this reason he paused at second so that he could return to first base if the ball were caught.

Torgeson also said he stopped to watch the ball’s flight when he was near third third. “I knew if Moon caught it I would be able to return to second and if not would have plenty of time to score,” he said. 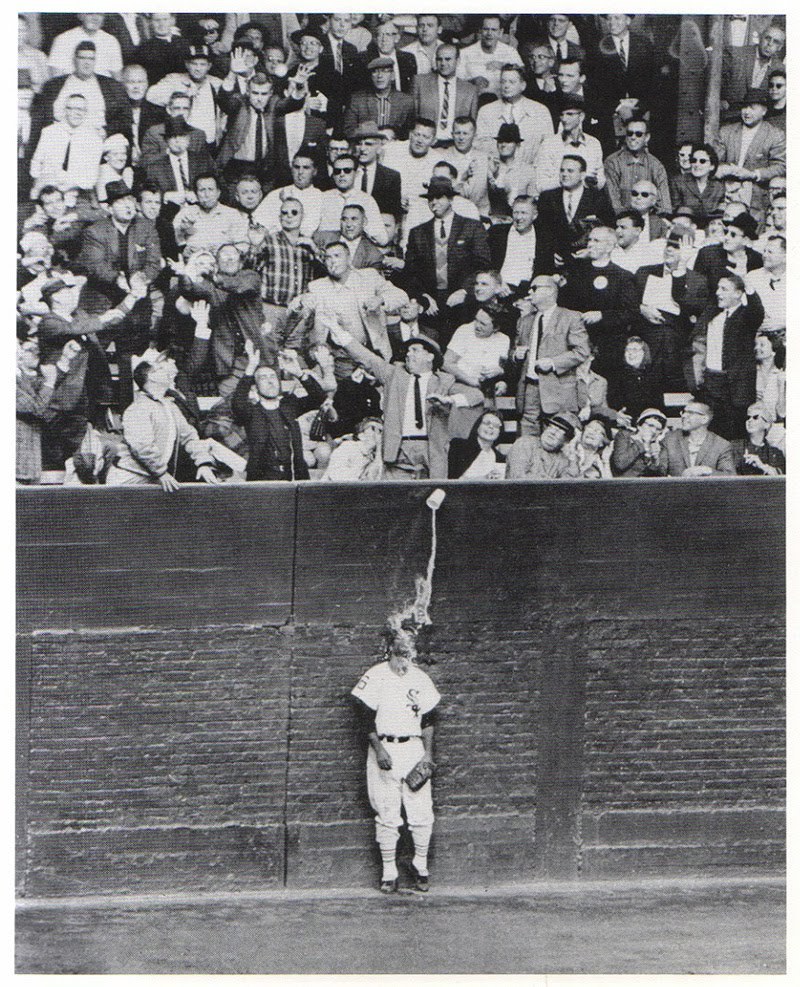 In the fifth inning, Smith found himself in the middle of a ‘shower.’ A beer shower to be exact as a fan accidentally tipped over his cup of beer, spilling its contents over Smith’s head and face. The fan was Melvin Piehl, a motor oil company executive, who later stated that he was trying to catch the ball so it would not hit his boss’s wife. At first Smith believed the dousing to be intentional until the left field umpire told him it was an accident.

Ray Gora, a photographer for The Chicago Tribune, snapped away from his spot near the third-base dugout with a new model of camera developed by the government to film rockets blasting into space from Cape Canaveral. It featured an innovative shutter allowing rapid-succession photos and used 70-millimeter film instead of the standard 35-millimeter.

Nat (King) Cole), who sang the National Anthem, flubbed toward the end of the song when he sang “land of the sea” instead of “land of the free.” He explained:

Singing the most powerful song in the world to such a large crowd frightened me a little and I blew the line. I realized too late I had made a mistake and couldn’t go back. But I was mighty happy Bill Vleck allowed me to sing our National Anthem.