It looked like the Go-Go White Sox were going. going, almost gone after returns were in from the fourth game. It was a third inning, a miniature of the seven-run third inning in the opening game, which ruined the American League champions.

In the seven-run inning, the White Sox had been helped along by three Dodger errors. This replica in miniature in the fourth game netted the National League champions four runs, and eliminated the hardy man of the Chicago staff, Early Wynn.

Even so, the White Sox, who had played almost dispiritedly since getting their first look at the Coliseum field, bounced back unexpectedly with the aid of the friendly screen in “trick-shot park.” They tied it in the seventh inning against Roger Craig when Sherm Lollar arched a homer over the Iron Curtain in left with two on. Lollar’s shot came after Ted Kluszewski had singled to drive in his seventh run of the Series.

Hopes of the White Sox to deadlock the Series at two apiece were smashed when Gil Hodges led off the in the eight inning against Gerry Staley with his fifth World’s Series homer. It was a stroke of deadly finality. There were no more base runners on either side.

The defeat brought the White Sox close to becoming the eighth consecutive failure to represent Chicoago in the classic since Clarence Rowland led the Pale Hose to victory over the New York Giants in 1917. The Cubs failed in 1918, the White Sox in the 1919 rigged Series. Then followed setbacks for the Cubs in 1929, ’32. ’35, ’38 and ’45.

Sherry Surprises TV Fans
After the latest White Sox defeat, Larry Sherry, 24-year-old former Los Angeles schoolboy, became the big surprise of the Series among the pitchers—that is to the television audience and the World’s Series fan who stays away from the ball parks during the season. Sherry came up to the Dodgers late in the season and won his last seven decisions.

The White Sox had seen him in the second and third games as a reliever. They saw him again in the eighth inning after Lollar’s drive bad tied the score. Sherry became the winner when Hodges smashed his homer to the right of the screen in left-center. In his two innings, Sherry was interrupted only by a walk to Staley. In seven innings across these three games, he had held the Sox to one run and four hits.

The somber developments against Wynn in the third inning started after two were out—a familiar pattern of Dodger rallies. All their runs in the first four games, save Hodges’ leadoff homer, were scored following retirement of the first two batters.

Wally Moon started the belated push against Wynn with a single to left, and Norm Larker followed with a soft single to center. Jim Landis raced in, fielded the ball, and sent a powerful throw toward third. As Billy Goodman reached for the ball, it brushed against
Moon’s leg and bounced to the right. Wynn, who was backing up the play, had to scramble for the ball, and his throw to the plate was too late to catch Moon, while Larker moved over to second.

Landis drew an error on the throw. It was the first error of the Series for the American leaguers.

The count was 3-and-2 on Hodges when he knocked a short fly to left. It was apparent that AI Smith was slow perceiving the flight of the ball because of the white-sbirted background. The ball fell several feet in front of Smith for a single and Larker raced in from second. 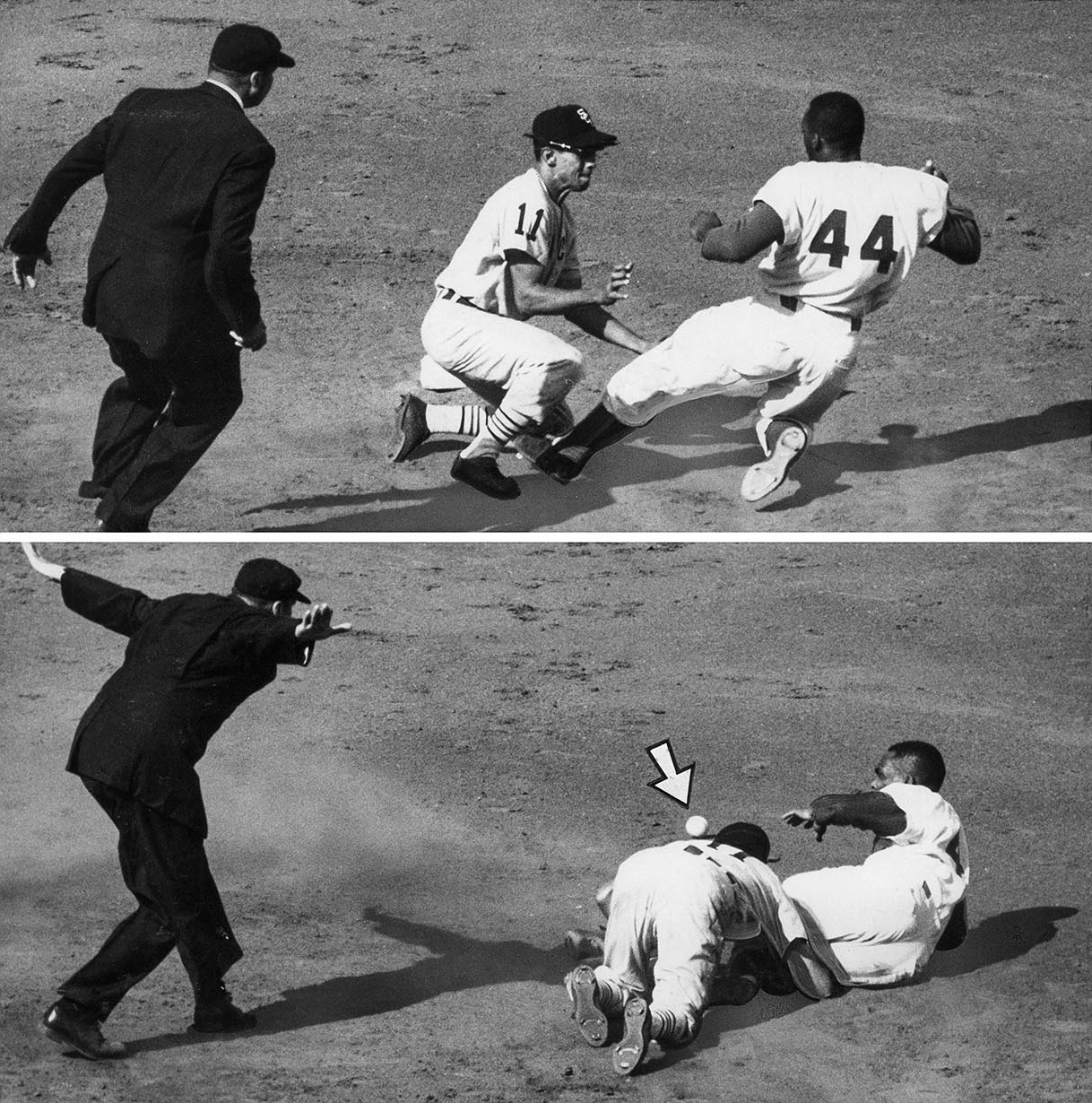 Dodger catcher John Roseboro slides hard into second base and knocks ball out White Sox Luis Aparicio’s hand in the third inning. Roseboro got a single and run batted in. Aparicio an error.

Passed Ball for Lollar
Don Demeter followed with a single to Luis Aparicio’s left. Hodges reaching third. Gil came home and Demeter went to second when Wynn’s low, outside pitch escaped Lollar. who was charged with a passed ball.

Demeter came home after John Roseboro dropped a single in front of Jim Rivera. Old Jungle Jim made a good throw to Aparicio, but the shortstop, after putting the ball on Roseboro, dropped it when they came together and drew an error.

With the fifth run in scoring position. Turk Lown replaced Wynn and closed out the inning when Maury Wills bounced to Nelson Fox.

The White Sox made two more false scoring starts—in the fourth and sixth—before they surprisingly broke through in the seventh for the tying runs. Earl Torgeson, batting for Lown, supplied the first out on a roller to Charlie Neal—who for a change, had no part on attack in this game, making four infield outs.

Landis, who had failed three times in his leadoff spot in a revised batting order, followed with a single to left-center. Aparicio bunted in a surprise maneuver, but was throw out at first. Though Luis was trying for a hit, he was credited with a sacrifice under the scoring rules.

Fox had singled his first two times up, giving him five successive hits, only one behind the Series record, only to fan in the fifth.This time he kept the rally going with a dribbler which biunced past Craig, rolling away for a single, Landis going to third. Ted Kluszewski singled over second and Landis came home. In the preceding 24 innings, the White Sox had scored only twice. 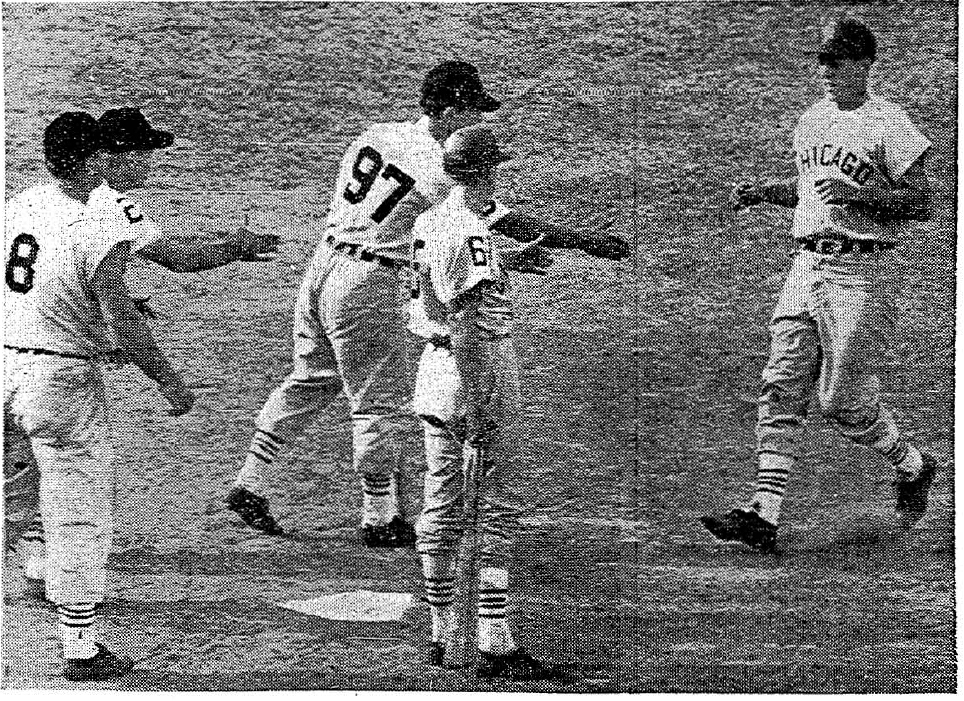 A FOUR MAN welcoming committee greeted Sherm Lollar after the White Sox catcher poled a game-tying three-run homer in the seventh inning of the fourth contest. Waiting for Lollar were Ted Kluszewski (8) and Nellie Fox (2), who were on base when Sherm connected; the batboy (97) and Billy Goodman (6).

Alston Calls Conference
Walt Alston came to the mound, but after conferring with Craig and Roseboro, decoded against a pitching change—his first wrong guess of the Series. Lollar missed Craig’s first pitch before sending the ball over the 42-foot high screen.

It was so close to the line that spectators weren’t sure until Umpire Hal Dixon, patrolling the left field area (why not a midget out there?) signaled it had left the premises in fair territory. It escaped tabulation as a “trick shot” homer after an usher, dispatched for that very purpose, reported the ball had landed in the twenty-ninth row, approximately one-third of the way up the 106-foot-high stands.

So it was a brand new game as Lollar followed Fox and Kluszewski across the plate on the first homer of the series over the meshed metal.

Staley ably protected the deadlock in the Dodgers’ seventh. Aparicio pegged out Neal, Fox tossed Moon and Ron Fairly, one of three who played in right field for L. A., went down on strikes.

Sherry Appears Third Time
Sherry showed up in the eighth. He had protected the 4 to 3 Los Angeles victory in Chicago for Johnny Podres and had rescued Don Drysdale in the eighth inning in the third game to stop a White Sox rally. But this one was Larry’s to win or lose.

Smith grounded to Wills, Rivera was thrown out by Neal and Staley walked, but was forced when Landis bounced to Jim Gilliam.

Staley, whose 2.17 earned-run average in 67 relief appearances had made him the top bull-pen operator in the American League, had one strike on Hodges when the first baseman connected.

Aparicio, leading off in the ninth, sent a grounder to Willis. The rookie shortstop then dashed in front of second base and nailed Fox on a close play. Moon took Kluszewski’s fly in left-center and the day was done.

The White Sox still were shaky in their fourth after the four-run Dodger mess in the the third, but Smith bounced a single against the left field wall and Rivera walked after two were out. Norm Cash failed for the third time as a pinch-hitter, striking out for Lown.

Billy Pierce, making his World’s Series debut, was impressive in the fourth, but Craig was just as efficient in the Chicago fifth. Billy had no trouble in this round, either.

Kluszewski, trying to make amends for hitting into a double play, launched the sixth with a single to right. After Lollar popped out and Goodman sent Moon, now playing left, deep into left-center for his drive, Smith walked. Rivera remained hitless in the Series when he popped to Neal.

Pierce’s last inning, the sixth, was a rough one. Demeter led off with a walk and Roseboro bunted. Pierce, in his haste to make a play at second, fumbled the ball and it went for a sacrifice and an error. Wills flied to Smith, and Craig sacrificed, Kluszewski took Gilliam’s pop.

Dodger Charlie Neal has stepped on second, forcing Ted Kluszewski, but has a problem getting throw away as Kluszewski slides toward him. Neal escapes and completes a double play to first. 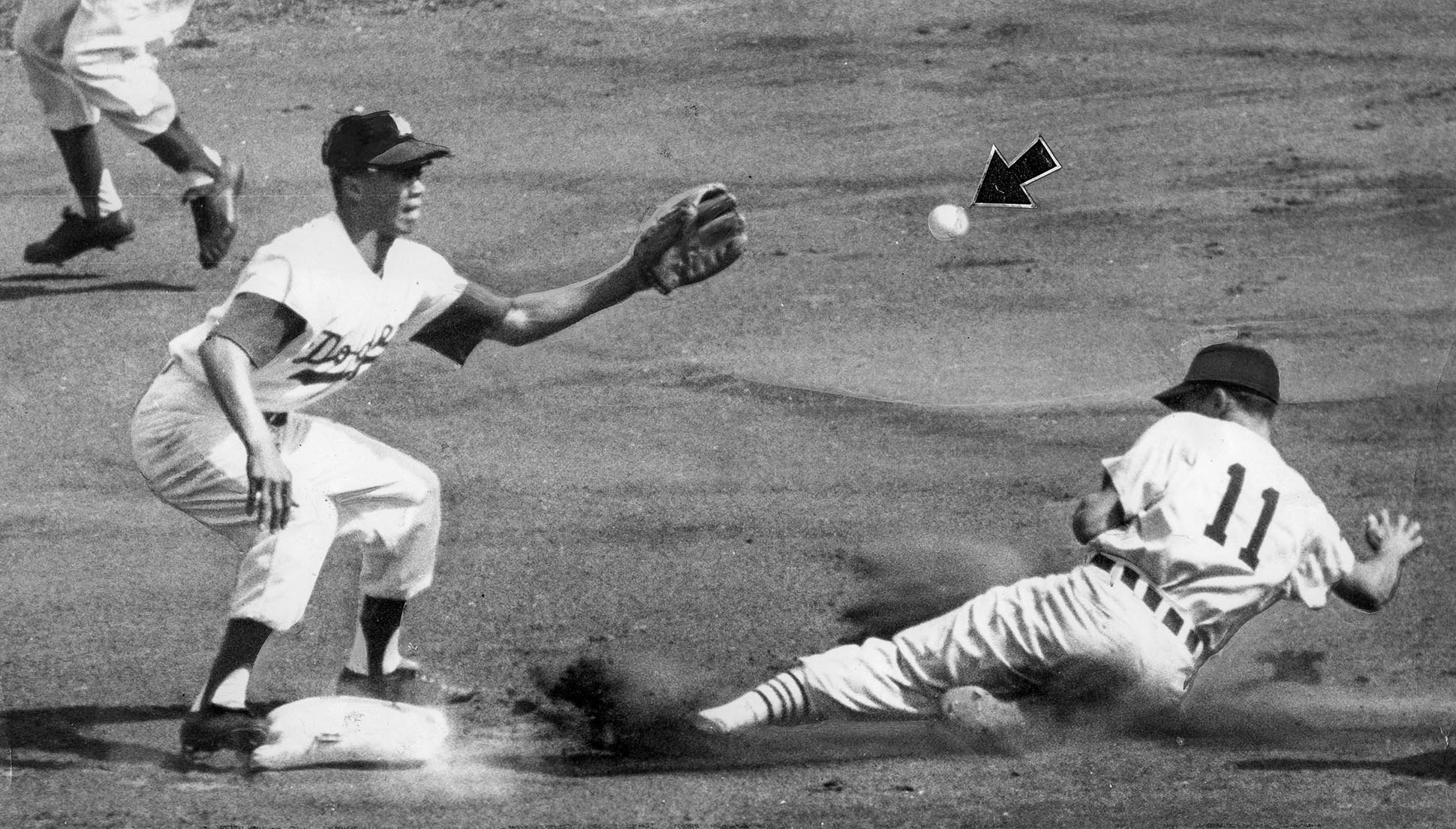 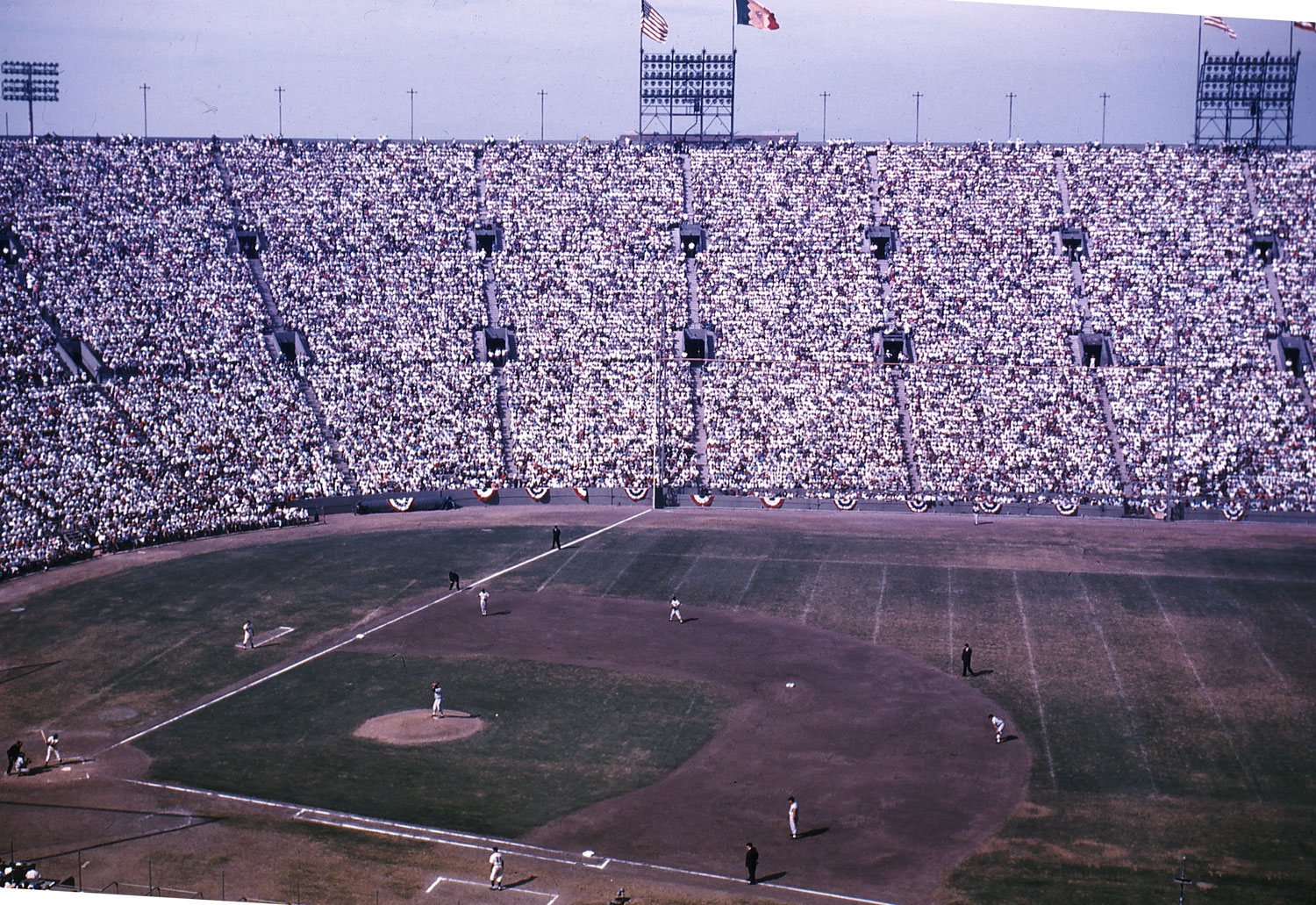 Nellie Fox was being kidded by Pee Wee Reese about being moved from the second to third position in the batting order. The Dodger coach grinned and asked the second sacker before the game, “When did you become a muscle man?”

Give us little guys a chance and we’ll be recognized for our power. I have now batted every place in the lineup except fourth, and if I get three or four hits today, I’ll move Kluszewski right out of that spot.

At the start of the fifth inning, when the White Sox were trailing by four runs, a group of rooters from the Windy City raised a large banner reading:

in the stands close to third base.

Taking a cue from the new nickname of the Go-Go White Sox, Red Patterson, the Dodgers’ publicist, chalked a sign reading:

on the blackboard in the clubhouse as a reminder to the players that they could go home for the season if they won the next day’s game. Walt Alston agreed to pose for pictures in front of the sign but only after making it clear that he had nothing to do with writing it.