BY EDWARD PRELL
The world series, which has been “on tour” since 1945, comes back to Chicago Thursday. And even after all this time it’s a day late.

The Chicago White Sox, who clinched the American League title in their 151st of 154th games, and the Los Angeles Dodgers, who needed a playoff to whip the Milwaukee Braves in the National League, are the principals.

A standing room crowd approaching 50,000 will jam historic Comiskey park for the first in the best four-of-seven game series between the teams which won the hard way.

White Sox Favorites
The White Sox, who cleared the 1958 world champion New York Yankees and the Cleveland Indians out of their way for the pennant, are 6 to 5 favorites to win the first game. The same odds are riding on them to take the series.

When the action gets under way in cool weather and cloudy skies at 1 p.m., Early Wynn will be on the mound for the American League champions. The 39 year old, 15th among the all-time winners with 271 victories, will pitch against Roger Craig, 31 year old, 6 foot 4 inch, 190 pound, right hander, the Dodgers’ best pitcher in the second half of the season.

Cubs in 1945 Series
It was in 1945 that Chicago last was on the world series stage, the Cubs losing to the Detroit Tigers in seven games. Even then, White Sox fans long had been wondering when a championship would come to the south side. Comiskey park was only nine years old when the White Sox had won their last title in 1919.

This is the fourth world series for the White Sox. They whipped the Chicago Cubs in 1906 after knocking off the Giants in six games in 1917, lost to the Cincinnati Reds in the rigged series of 1919. The White Sox won in 1901, the American League’s first year and in the pre-world series era.

This is the 10th world series for the Dodgers, who won only one out of nine when they were based in Brooklyn.

May Be Richest Series
This is the 56th world series and will be one of the richest of them all if the Los Angeles Coliseum plays to near capacity—90,000. And it’s the first time the world series has been played west of St. Louis.

After Friday’s second game, the rivals will fly to Los Angeles, resuming completion on Sunday. Three games are scheduled in the Coliseum. If a sixth and seventh are necessary, they will be played in Comiskey park, starting next Thursday. The preceding day is a travel date.

Sell Standing Room
Standing room and bleacher tickets will go on sale at 8 a.m. Thursday and Friday at Comiskey park. From 3,000 to 5,000 standees will pay $4.10 for the privilege of watching the spectacle. The bleachers seat 1,500.

All box and reserved seat tickets, numbering slightly less than 44,000, were parceled out to lucky applicants in a two day sale, but there were reports Tuesday night of scalpers offering them at inflated prices.

Wynn is one of only four players who have been to the world series wars. He went down in the Cleveland debacle of 1954, tho pitching a creditable game. Craig, who bears a striking resemblance to Slimm Somerville, old-time movie comic, beat the Yankees in 1955, but lost a decision to them the following year.

Makes Amazing Comeback
Craig has made an amazing comeback since suffering from shoulder trouble. Last year he pitched for St. Paul and led the American Association with 17 defeats. He started this season at Spokane and was 6-7 when called back by the Dodgers. He won 11 of 16 decisions and had an earned run average of 2.06.

Lopez has indicated that Bob Shaw, whose 1806 record gave him the percentage championship in the American League, will start Friday. But there was speculation that Lopez might switch to Billy Pierce if he decided against using the southpaw in the Coliseum, a risk to lefties because of the 250 foot foul line in left field.

Lopez Noncommittal
Lopez, however, said he would not hesitate to use Pierce in the quaintly dimensioned park.

By leading off with Wynn, Lopez can call on his stout hearted veteran in the first, fourth and seventh games, if the series goes the limit. Old Gun is most effective when he works with only three days rest. Shaw, would be available for the fifth game.

Walter Alston, the Dodgers’ manager, who won and lost to the Yankees in two trips to the series, will use one of two lefties, Johnny Podres or Sandy Kofax, in the second game.

Dodgers Use 6 Lefties
The Dodgers will have six lefties swinging at Wynn’s offerings. Two of them, Junior Gilliam and Maury Wills, are switch hitters. The other four southpaw batters are Duke Snider, Wally Moon, Norm Larker, and John Roseboro.

Lopez, before calling together his players and coaches for a strategy meeting Wednesday afternoon after a batting tune-up, was happy over the condition of Lollar, who has been under treatment for a bruised right hand.

Hand Swollen, Tender
Tho it still is slightly swollen and tender, the catcher said he’d forget all about it in the excitement. Dollar made three hits for the Yankees in the 1947 series, coming to bat only four times.

Other world series veterans among the White Sox are Smith, who played for the Indians in 1954, and Earl Torgeson, a member of the 1948 pennant winning Boston Braves.

The series figures to be a battle to score runs. Fox is the only .300 hitter among the White Sox, having gone six points over the figure. The Dodgers have only two players over .300. Snider batted .308 but he played only little more than half the time, and Moon hit .302.

Both clubs won the championship because they had the ability to win the close ones. The White Sox won 35 of 50 decided by a single run, the Dodgers, 33 of 55, including two triumphs against the Braves in the playoffs.

Most critics rate the Dodgers slightly superior in power and perhaps possessing more depth in the pitching department, tho the National League champions’ top starters probably do not rate with Wynn and Shaw. The White Sox rate an edge on defense and perhaps in speed, but the Dodgers are not slow-footed, by any means.

No Match for Luis
Among the fleet Dodgers are Moon, Gilliam, Wills, Neal, Don Demeter, and John Roseboro. Demeter, ann outfielder, doubtless will be used for defense in late innings if the Dodgers are out in front.

The Dodgers, however, have no one who can match the base running skill of Aparicio, who stole 56 times last season in leading the American League a fourth consecutive year. Other White Sox speed boys are Landis, Smith, Fox, Rivera, and Jim McAnany.

Lopez plans to platoon McAnany, a right handed hitter, with Rivera. He also may alternate Goodman at third with Bubba Phillips, who bats right. Lopez said that Kluszewski will be at first base against all kinds of pitching.

Alston, like Lopez, is a percentage manager, who uses his personnel to best advantage. In bringing the Dodgers to the top of after a seventh place finish in 1958, their first year in Los Angeles, the quiet spoken former school teacher from Ohio doubtless will be voted manager of the year. This honor also is expected to to be won by Lopez. 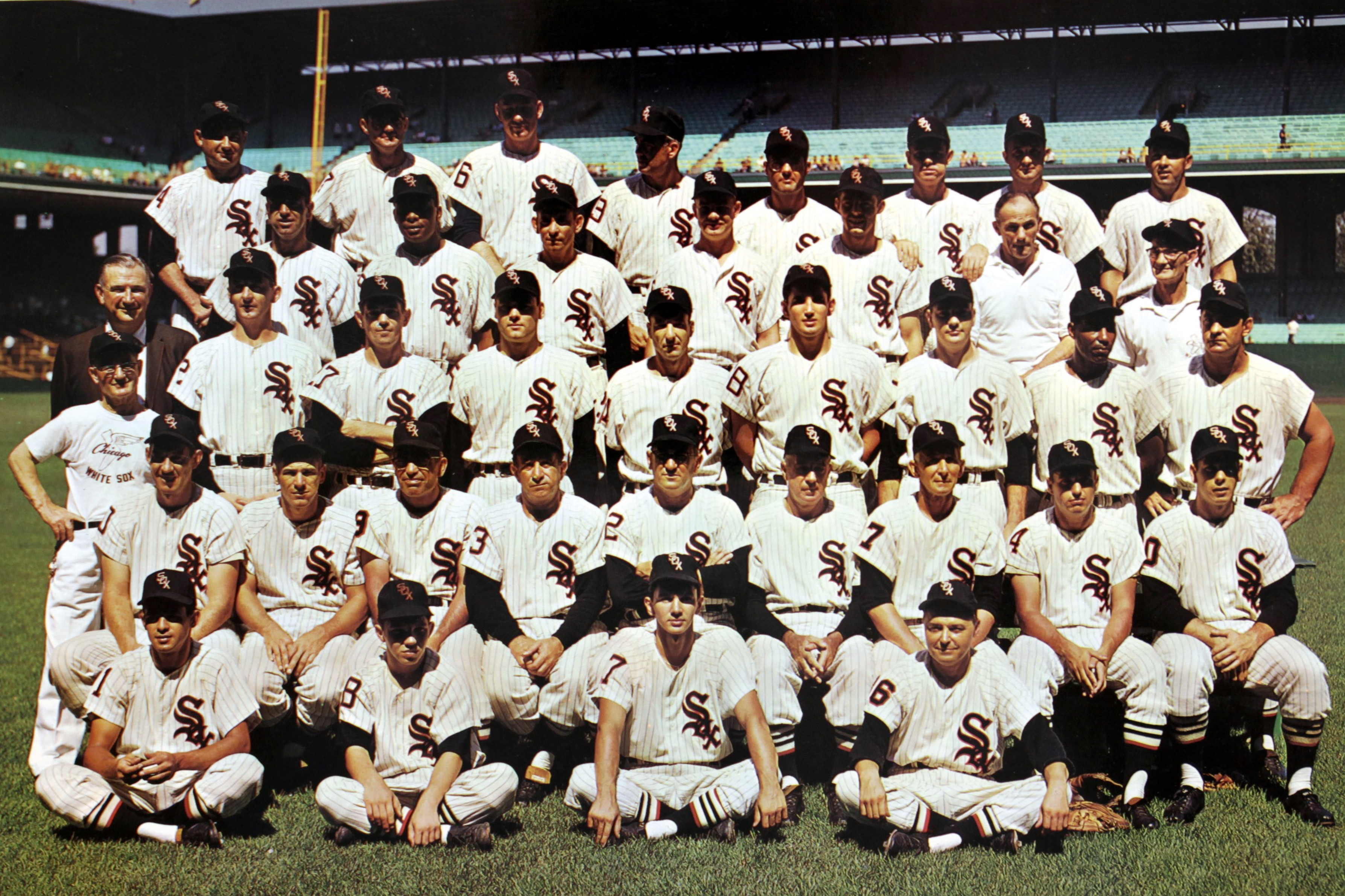 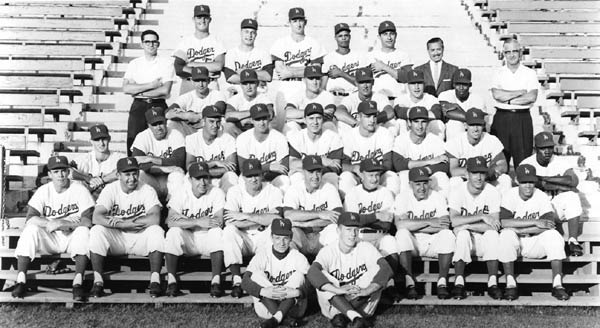 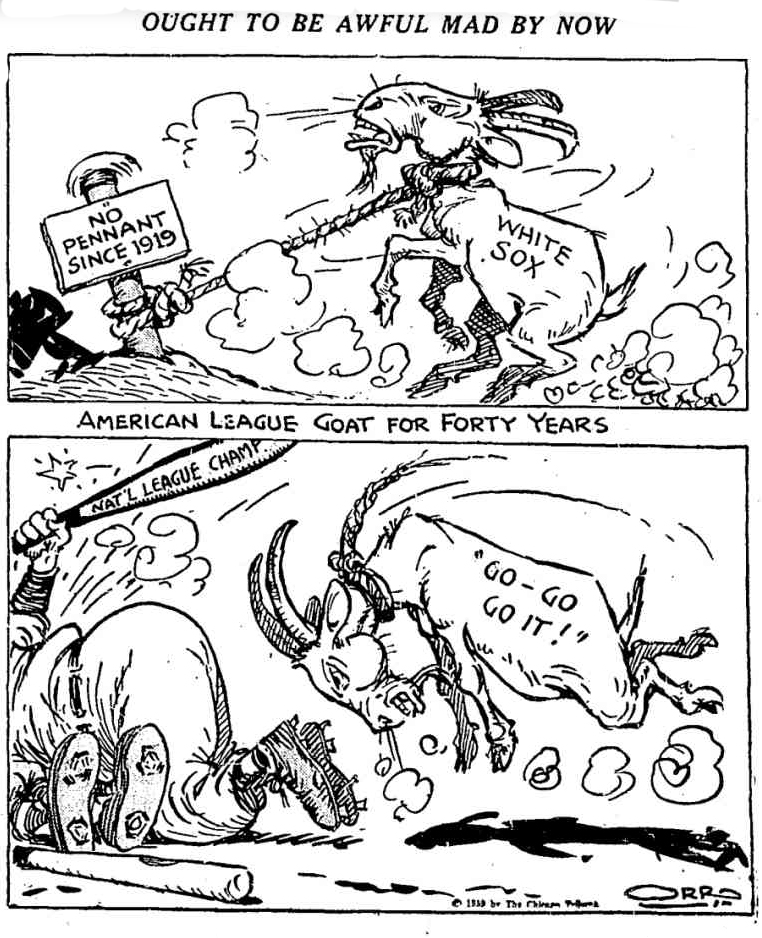 The major air carriers are taking the first east-west world series calmly, officials reported Thursday. Only one extra airplane-really an extra section-has been scheduled for Friday evening when the play shifts from Chicago to Los Angeles.

The airlines provide the only means by which baseball fans, players, officials, and the country’s sports writers can be at all games between the White Sox and the Dodgers. Rail or bus travel is too slow despite a one day halt in the series Saturday.

Charter Planes Ready
Transportation, of course, has been guaranteed the two ball clubs, officials of each team and each league, and the sports reporting staff. It will be provided by seven chartered United Air Lines planes.

The piston engined Douglas DC-6Bs and DC-7s will fly from Midway airport to Los Angeles between 6:30 and 9:30 p. in. Friday. They will return Tuesday evening if play extends beyond the fifth game.

Just plain fans—and there are an estimated 2,500 to 3,500 annually who try to see all the games in the world series—may not be as well off.

Most Planes Sold Out
Almost all of the carriers that regularly fly the 1,721 mile Chicago-Los Angeles airway report sell-outs on their planes for Friday night and all day Saturday. Most bookings are weeks old and only about 20 per cent represent baseball fans.

The one extra plane, an American Airlines DC-7 with places for 85 passengers- was sold out Wednesday in three hours. American estimates that it ha s almost 200 re- quests for seats it cannot fill.

United said its unchartered planes were “almost completely sold,” but the line is accepting standby requests.

So were Trans-World Airline and Continental Airlines. Both recently introduced Boeing 707 jets between Chicago and the west coast. They said their jet services—except for Continental’s earliest morning flight on Friday and Saturday—were sold out. 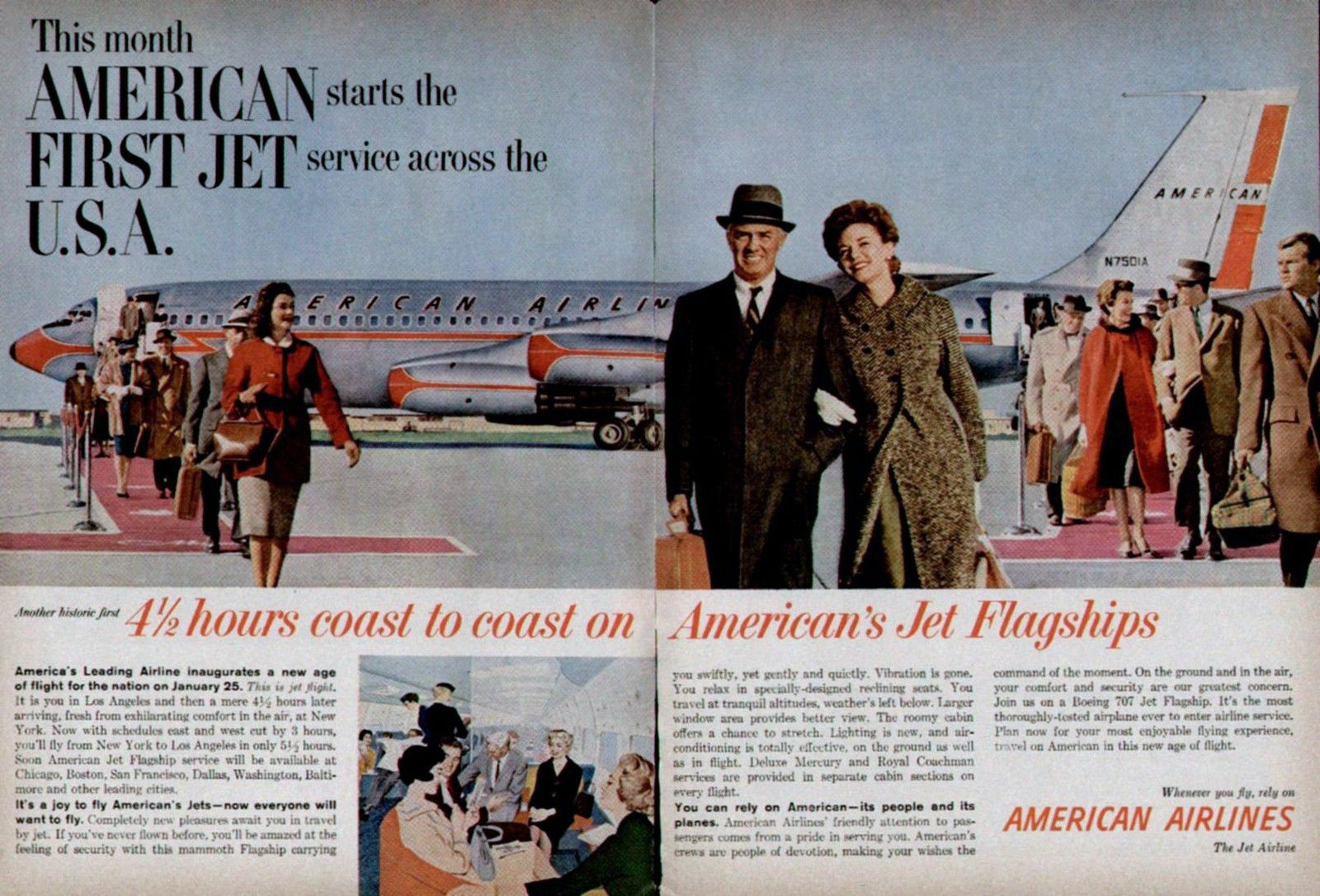 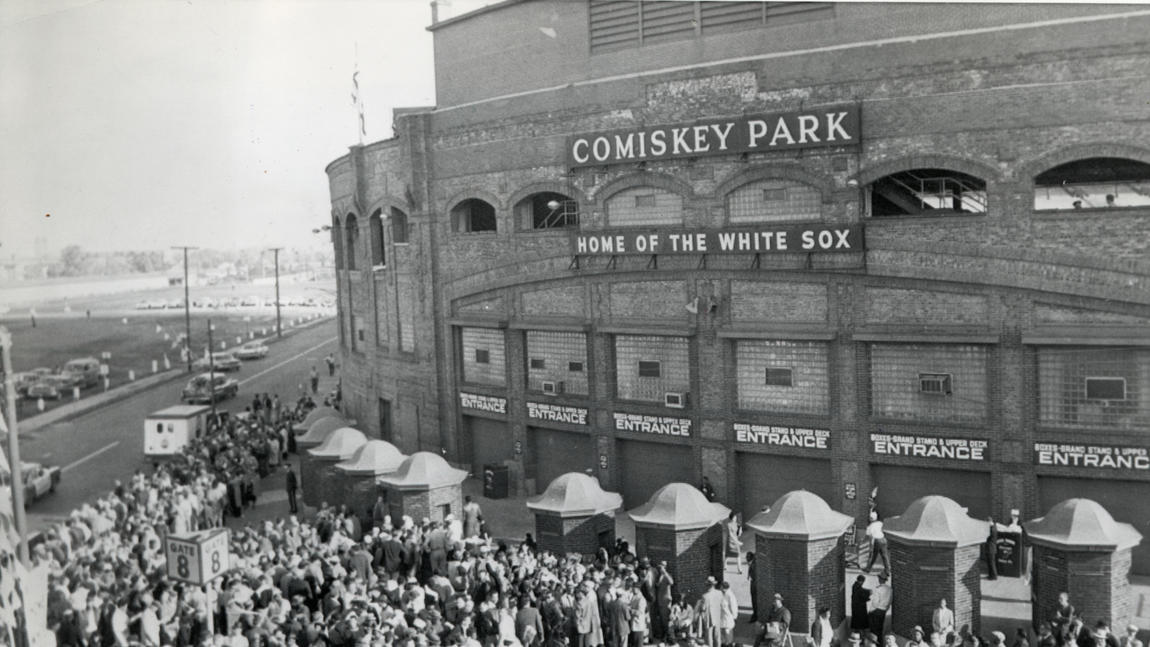